Concrete walls, cold marble, bronze and brass… And all this in sunny Miami! French designer Jean-Louis Deneau came up with an absolutely atypical interior for himself 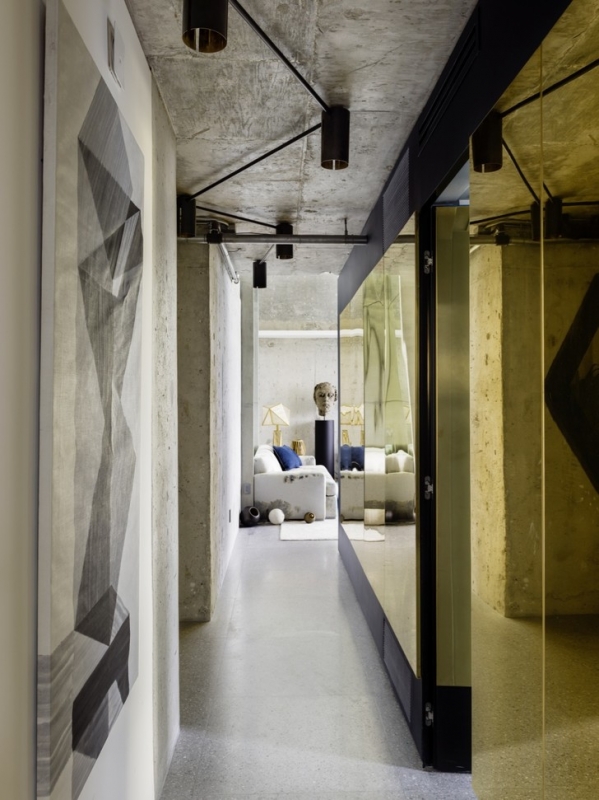 French designer Jean-Louis Deniot was in Miami for the first time 15 years ago. “It was unforgettable, and now I want to come back here all the time,” says the designer. — Many of my customers are from the USA. When I’m in New York on business, especially in winter, I always take a ticket to summer for the weekend. It’s much nicer to spend a weekend on the beach than somewhere in a snowdrift or in the middle of a snowstorm!” In Florida, Deno leads a number of large commercial projects, including the design of the Elysee residential complex on the shores of Biscayne Bay, and designs private villas and apartments. 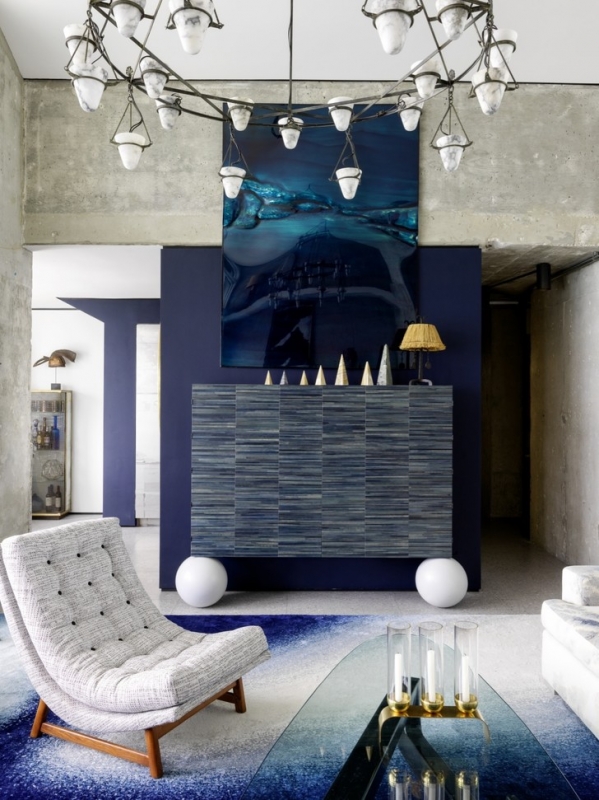 Living room. Vintage armchair upholstered in Kirkby Design fabric bought in Los Angeles. The chest of drawers is made to order, on it are marble obelisks bought at a Paris flea market, and a lamp from the 1930s, Galerie Teo Leo. Vintage table, Paul Frankl Furniture. On the wall is the work of the artist Jerome Robbe.

“This time the customer asked me to redo his apartment on South Beach, which at that time resembled a grotesque stylization of a Spanish castle: orange walls with tapestries of the XVIII century covered with a thick layer of dust, wrought-iron chandeliers and fake columns,” says the designer. — I wanted to immediately take out all this good and do something bold, modern and in the spirit of Miami.” 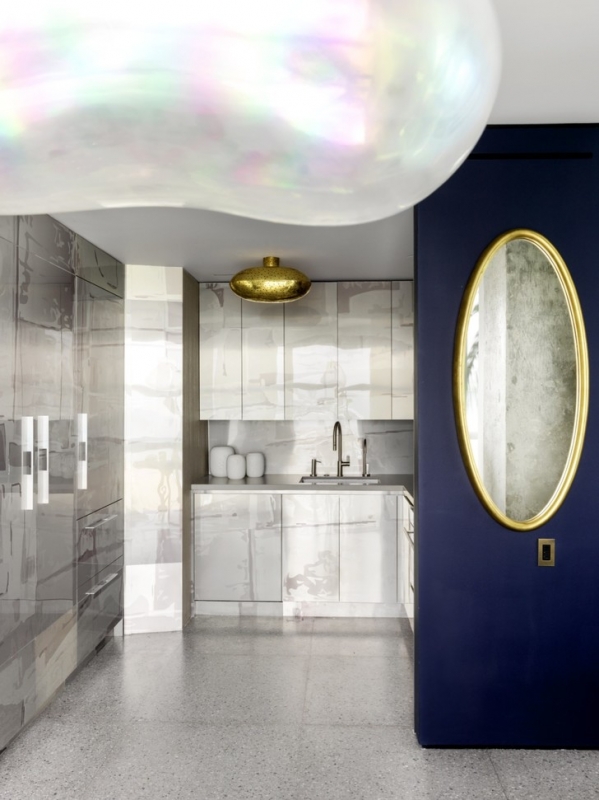 Kitchen. The facades of the lockers are decorated with laser printing. The brass lamp in the background is made to order. Mirror, 1950s, bought in Los Angeles. 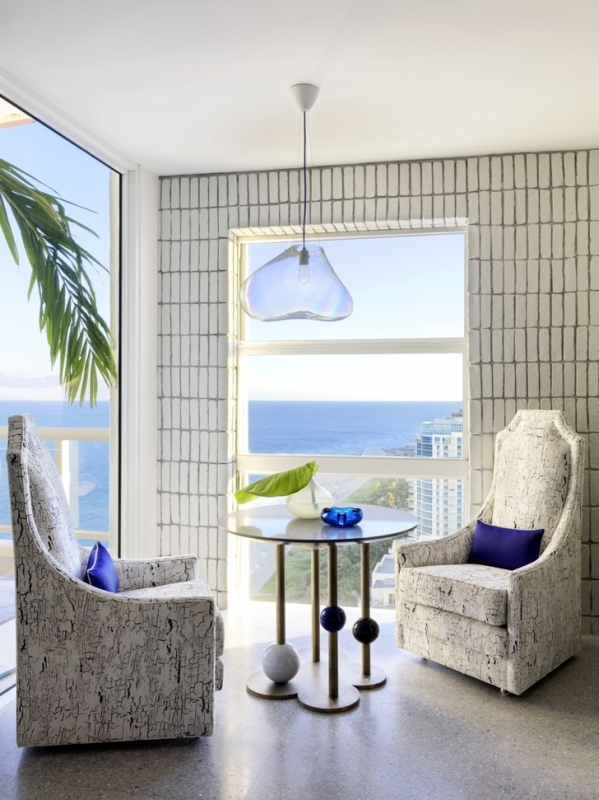 Bolla ceiling lamp resembling a soap bubble, designed by Harry & Camilla studio, FontanaArte. The table is made to order according to the sketches of Jean-Louis Deneau. Vintage chairs upholstered in fabric, Romo.

Deno began by going over in his mind all the interiors in Miami that he had ever seen and that had impressed him. “Only the fantastically luxurious villa Casa Casuarina by Gianni Versace on Ocean Drive came to mind, but it was built in the 1930s, and the family moved there in the early 1990s, that is, more than 25 years ago. I remembered the houses of collectors George Lindemann, Martin Margulis and totally white apartments filled with art, of which there are many. Perhaps that’s all. I wanted a different, bright and corresponding to the new image of the city, which, after the Art Basel fair arrived there, began to be perceived as the new capital of art and design.” 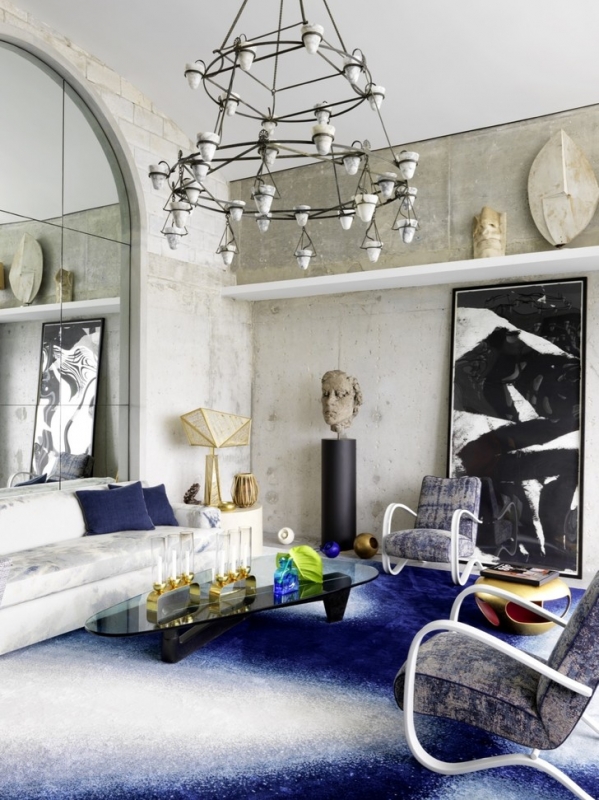 Deno decided to start from the image of an art workshop. “For some reason I remembered Constantin Brancusi’s Paris studio next to Pompidou. Monochrome, abstract sculpture, raw blocks of stone, brass — the furniture of his studio has always fascinated me,” says the decorator. “Besides, such indirect quoting of Brancusi, it seems to me, adds weight and authenticity, honesty to the interior, contrasting with the nonsense and madness of the world of modern art, which is becoming more common.” 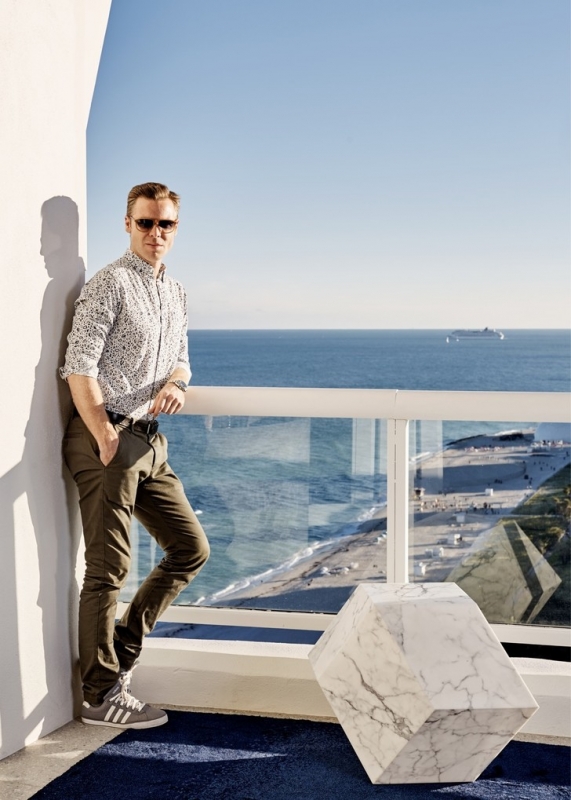 The author of the project is designer Jean—Louis Deneau. Vintage marble table bought at a flea market in Paris.

On 130 sq . m . Momo has planned two bedrooms, a kitchen with a panoramic window, there is also a breakfast table, which he designed himself (as well as most of the furniture), where it is nice to drink morning coffee while looking at the ocean. In the living room, directly opposite the window, there is an arch—shaped mirror 4.5 m high, reflecting a dizzying landscape. “Since this is the 26th floor, it feels like you are on a cloud level with the birds – I even found an eagle’s nest right under the window in the niche of the facade,” says the designer. 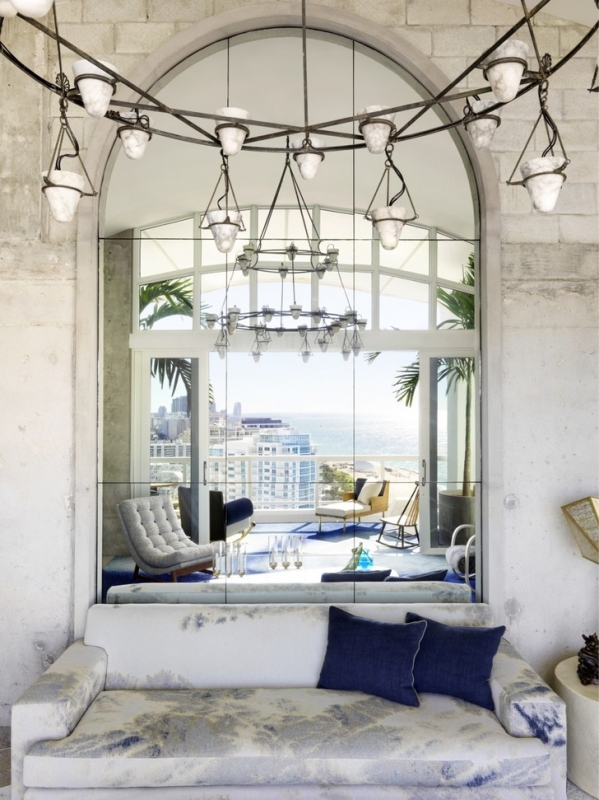 “Since this is a high floor, there is a feeling that you are on a cloud”

The connection of the interior with nature is inextricable. The bright blue carpet in the living room is the color of waves, the brass panels on the walls symbolize the sun, the painting on the ceiling in the bedroom resembles a whirlpool or a tornado funnel. “In fact, we didn’t have a goal to portray a hurricane, the image appeared spontaneously,” says Deno. — The room had a rather boring shape and was perceived as a cramped box. I wanted to get rid of this feeling. The painting by the artist Florence Girette helped.” 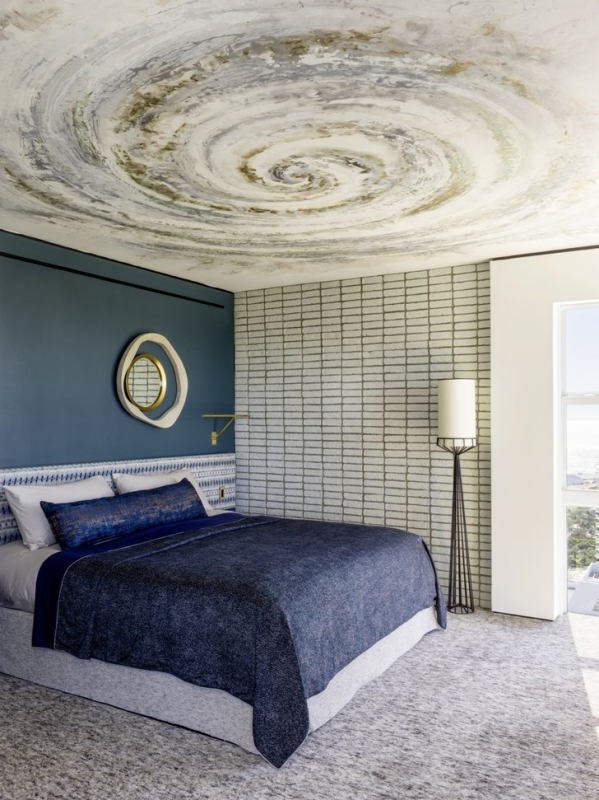 Bedroom. Ceiling painting by Florence Girette. The headboard of the bed is covered with Nebula fabric from Aldeco. Mirror Lily, R&Y Augousti. The floor lamp is made to order. Bedspread, decorative pillows, Romo, Lelievre.

The ceiling height (5 m) made it possible to choose oversized furniture and not to be small — for example, to put a sofa 3 meters long in the living room and hang a massive chandelier with 32 alabaster horns from the ceiling.

The interior does not fit into the stereotypical ideas about real estate in Miami, but sets a new standard. 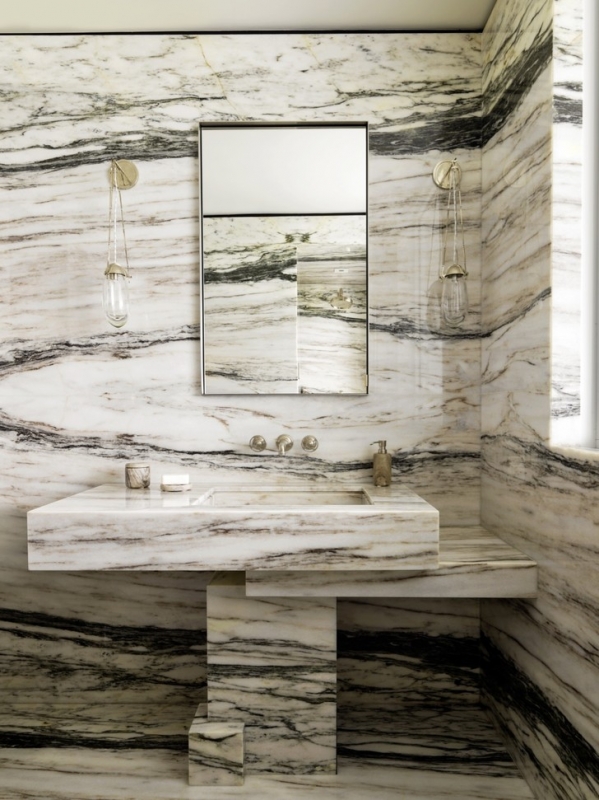 “In the arrangement of furniture, you can notice the artistic chaos that is usually unusual for me,” says Deno. — There are a lot of experiments for me in this project, I usually work more with classical forms. But in my opinion, there is nothing particularly avant-garde in what happened, which would interfere with living comfortably here. I am pleased that the interior does not fit into any stereotypical ideas about real estate in Miami, but sets a fundamentally new standard. And for me, I admit, this is also something new.” 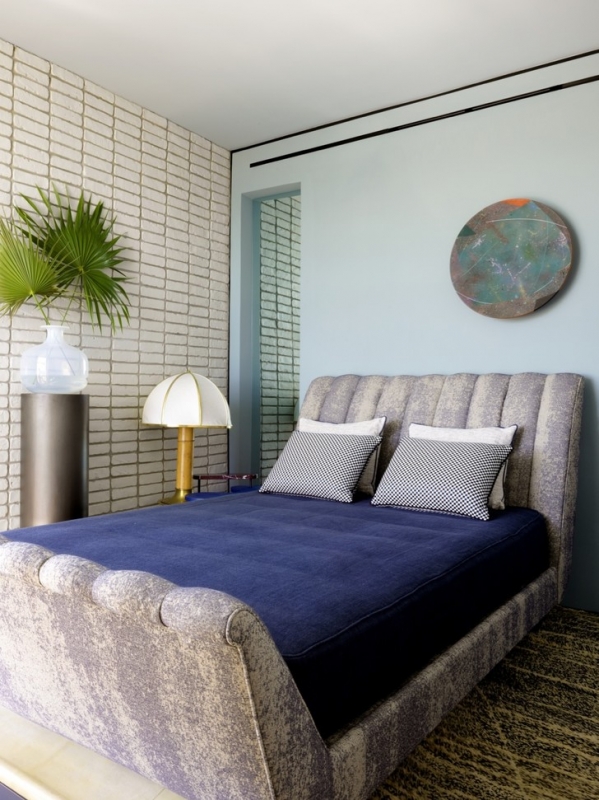 The bright blue carpet in the living room is the color of waves, brass panels symbolize the sun 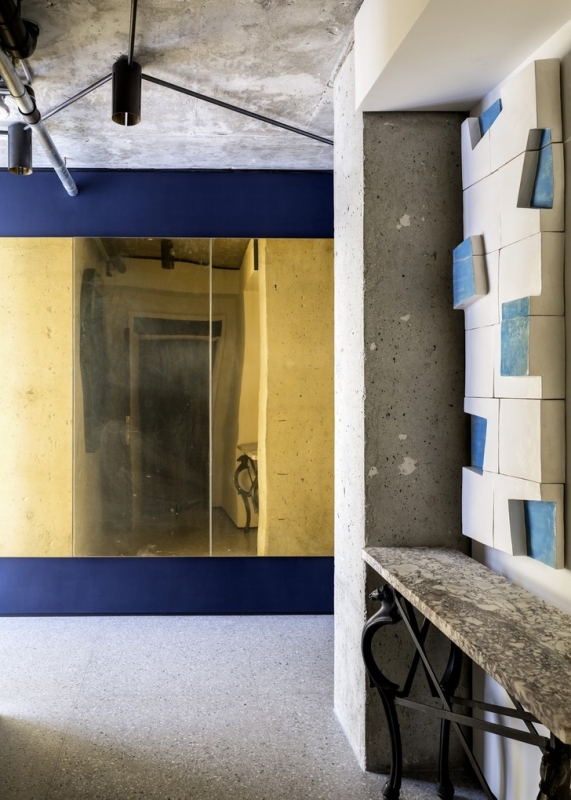 Hallway. French console, 1940s, with marble countertop, Galerie Yves Gastou. On the wall is a ceramic panel by the artist Stephanie Bergmann.