Strict symmetry, black-and—white gamma, modern art – these are the three pillars on which this apartment in the Moscow house of 1948 rests 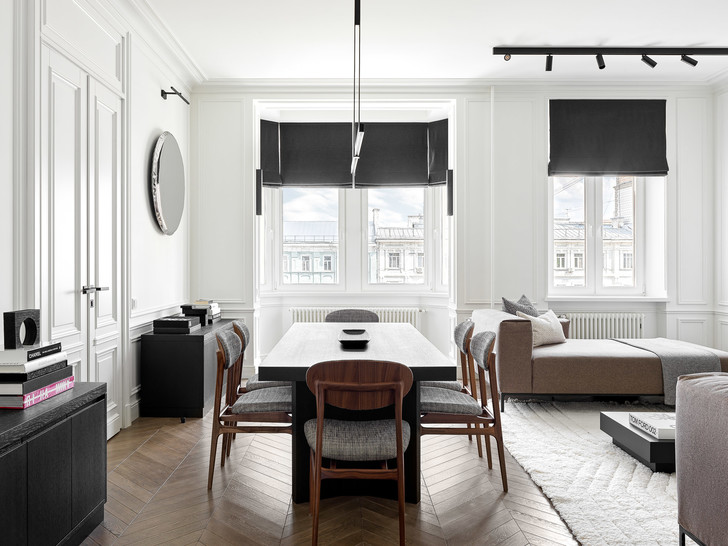 View of the living room from the hall. Table, oak veneer tinted, made to order according to the designer’s sketches. Vertigo chandelier, Michael Anastassiades. On the table: a dish made of solid oak, Wood Zen Art. Chairs Agio, Dale Italia, upholstered with Dedar fabric. Curtains, Houles.

GENERAL PARAMETERSProperty type: apartment in a house built in 1948

Where is located: Moscow

Color scheme: originally conceived as strictly black and white, but at some point I wanted to “hooligan”, and added a bright abstract painting, a pink neon cross over the bed in the guest room, and so on

“Customers are people from the fashion sphere, they constantly deal with fabrics and accessories, they are well versed in them and feel colors and textures very subtly, so they are very demanding in this regard,” says designer Elena Pritula. At home, they wanted to take a break from the color and texture diversity they deal with at work, so it was decided to focus on a minimalist interior that would become a neutral background for contemporary art objects. 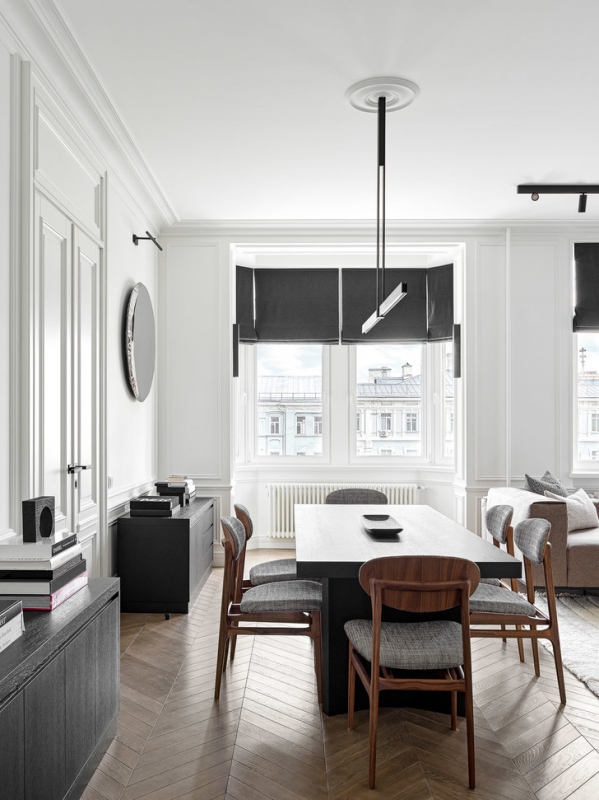 View of the living room from the hall. Table, oak veneer tinted, made to order according to the designer’s sketches. Vertigo chandelier, Michael Anastassiades. On the table: a dish made of solid oak, Wood Zen Art. Chairs Agio, Dale Italia, upholstered with Dedar fabric. Curtains, Houles.

Both the customers and the designer treated the architectural appearance of the building with respect: the house was built in the style of the Stalinist Empire in 1948, with characteristic neoclassical elements, so the stucco decor in the interior appeared logically. The furniture in the apartment was mostly made to order according to the sketches of the author of the project — large-scale items were needed, it was not possible to pick up such from existing lines. 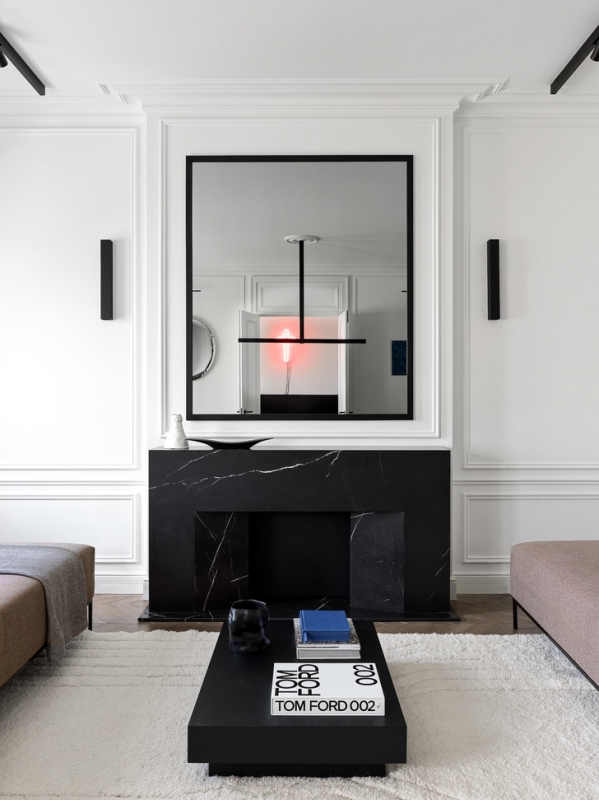 The main planning technique here is the construction of premises along the axes. In fact, the apartment originally had a competent layout, and the axes as such were present there, but they were kind of hidden, hidden in the layout, they wanted to “manifest”. Therefore, it was decided to combine the space of the living room and the hall — on this axis there is a dining table and a guest room.  Actually, it is conceived as an extension of the living room space, because it is used infrequently, at normal times its doors are open and it visually connects to the living room.

On the central axes there are key decorative objects — a plaster torso, a neon cross, a fireplace with a mirror. In the bedroom, the view of the kimono box also opens through the open doors of the dressing room. Symmetry is clearly maintained almost everywhere — in the layout of stucco, in the arrangement of furniture.  That is, such a small Palladian universe has been created, where everything is clear and understandable, your life and the whole world in general are under your control. 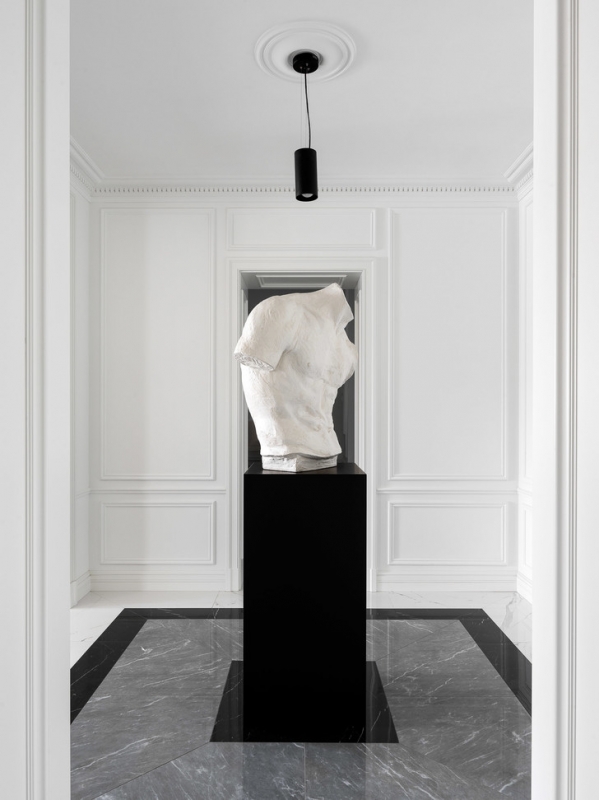 In the center of the apartment there is a square hall — from it the doors lead to several rooms at once. If we apply urban planning terminology, this is the “square” from which all the “roads” diverge. Therefore, a spectacular torso by sculptor Vasily Vershinin was installed here, the torso is made of plaster and tinted. We focused on the male torso of the work of Antoine Bourdelle: customers saw it a couple of years ago at the exhibition “Back Side — Dos A La Mode”, which the Fashion Museum (Palais Galliera) arranged in the house-museum of the sculptor in Paris. This is not an exact copy, but rather a “variation on the theme”: customers were inspired by the manner of Bourdelle, which combines a classical theme and a modernist expressive interpretation of the form. 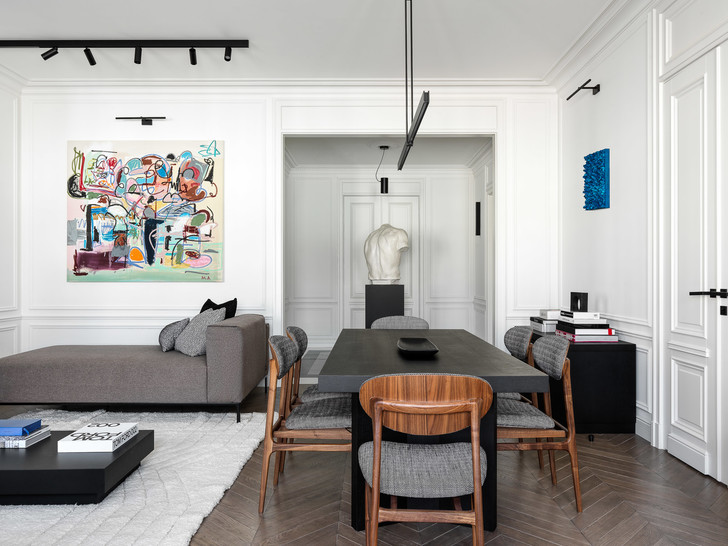 Living room. Above the sofa is the work of “Frida” by Marcos Anziani, Askeri Gallery.

In the living room, the owners watch movies in the evenings, read and listen to music — the TV screen is built into the mirror above the fireplace, customers rightly believed that the view of the TV would spoil the overall aesthetic idea, so it was hidden (the screen becomes visible when the TV is on, even its borders are not visible on the mirror when turned off). Instead of the usual sofas, two day-bed sofas were chosen so that you could lie down and read on them. There is also a dining area here — guests come to the house often, but these are not crowded parties, but chamber meetings with family and friends. 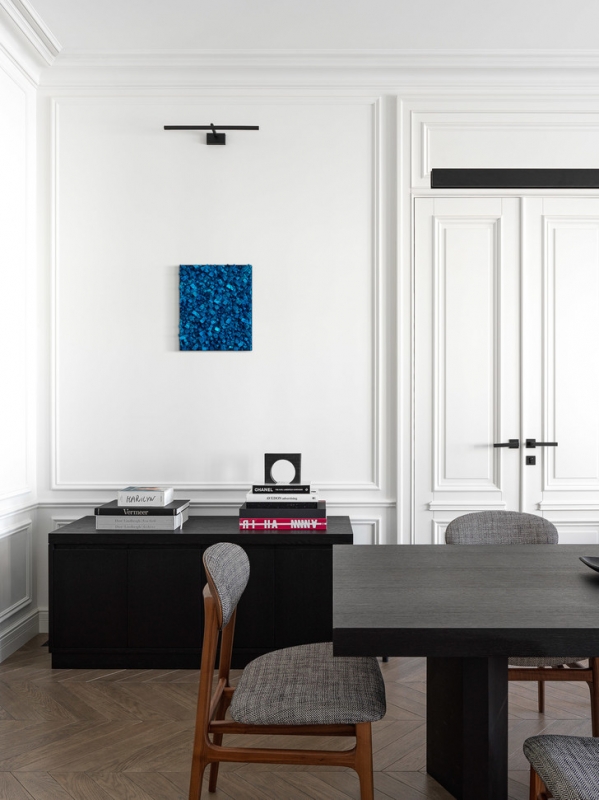 Works of modern art are an important element of the interior. The work of the famous Korean artist Kwan Yong Chan from the Polina Askeri Gallery decorates the dining area. Kwan Yong Chan has amazing art objects made of bags rolled up from ancient mulberry paper with inscriptions in the form of hieroglyphs – love messages, bills and anything else, the main thing is that the inscriptions are connected with people and their lives and emotions. The triangular shapes of these elements resemble bags with medicinal herbs from an old pharmacy. The artist paints them with tea or pigment. The colors are simply fascinating, and also this mulberry paper somehow smells special. The customers’ work is monochrome — ultramarine, very deep and beautiful, with a full semantic set of this color. 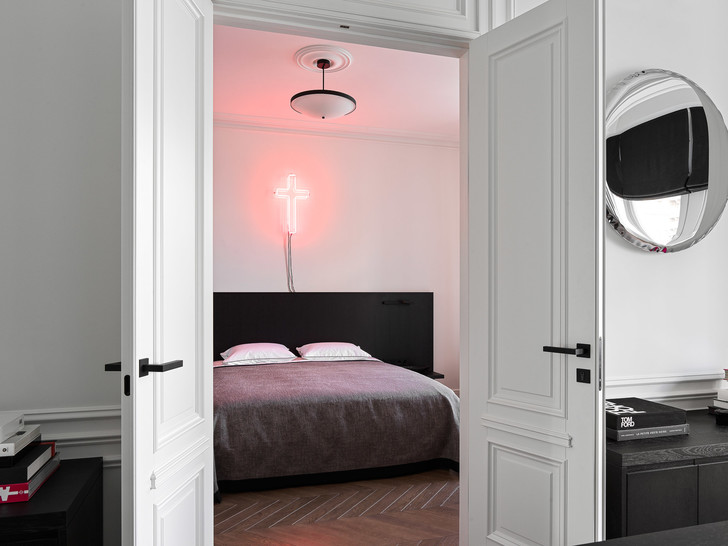 View from the living room to the guest bedroom.

In the bedrooms, we tried to use the minimum amount of furniture — only the most necessary items, so as not to overload the space. Of course, there are beds and armchairs here, but there are no bedside tables — shelves for books and phones were specially made whole with a headboard to make large, massive objects-objects: I wanted a large scale and brutality. Both bedrooms originally had built—in wardrobes – there are such in any Stalinist house, they are quite comfortable, by the way. The niches of these cabinets were preserved, but new interior parts and doors were made of tinted dark glass. 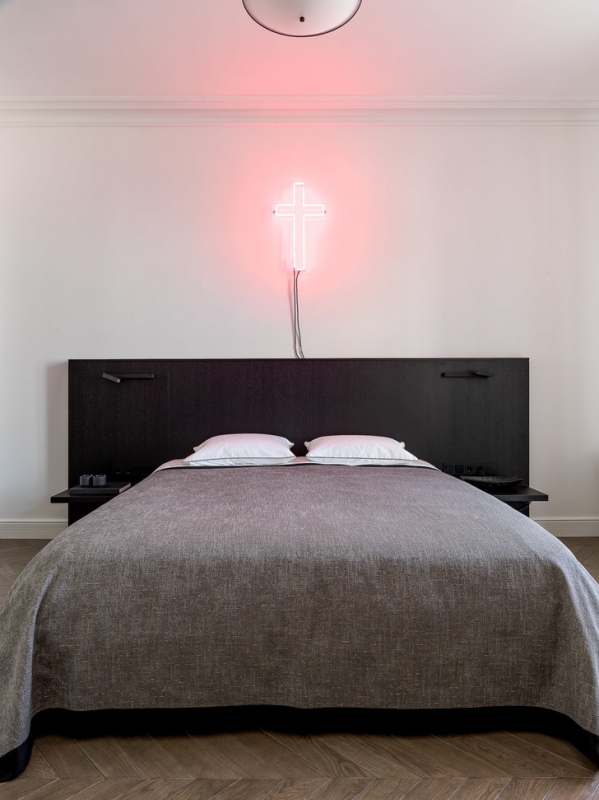 Guest bedroom. The bed and chandelier are made to order according to the designer’s sketches. Sconce for reading, Mick Wall, Wever & Ducre. An art object in the form of a neon cross. To the right of the bed is a dish—rook, ash, Wood Zen Art.

Both bedrooms were originally planned as very similar in style, but there are small differences: different bed shapes, different armchairs and, of course, different art objects. In the master bedroom there is a kimono in the museum box, in the guest room there is a neon pink cross. “This is a deliberate provocation, I wanted the interior not to be too refined and serious,” says the designer. 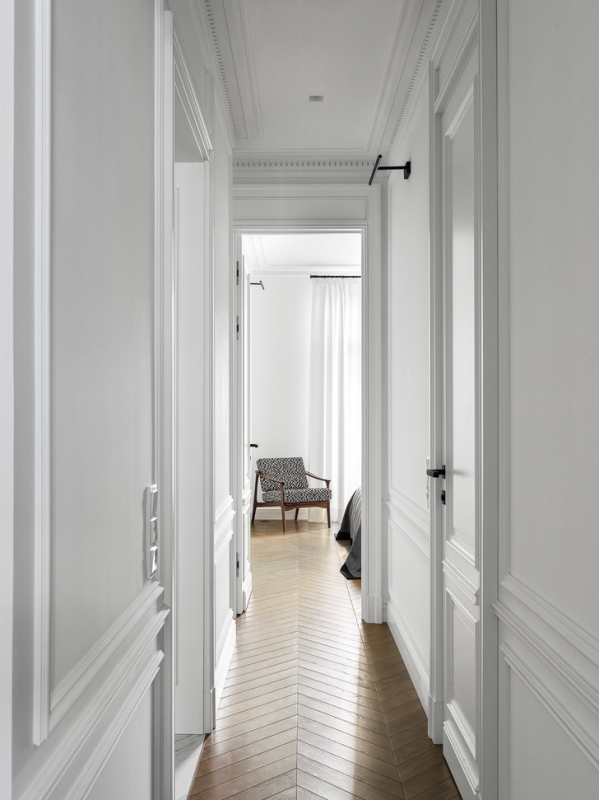 View from the hallway to the master bedroom.

In the master bedroom, the key element is a men’s wedding kimono with a very rare decorative motif: the image of an eagle. This is a copy of the original kimono of the beginning of the XX century, which the owners of the apartment found in New York, in the cult vintage store New York Vintage, in the department for stylists, where they give vintage things for filming for rent. “Actually, they don’t sell things in this store, but my customers managed to persuade the owners, and they were sold this kimono with the condition that if they ever decide to sell it, it will only be to the same store,” says the designer. 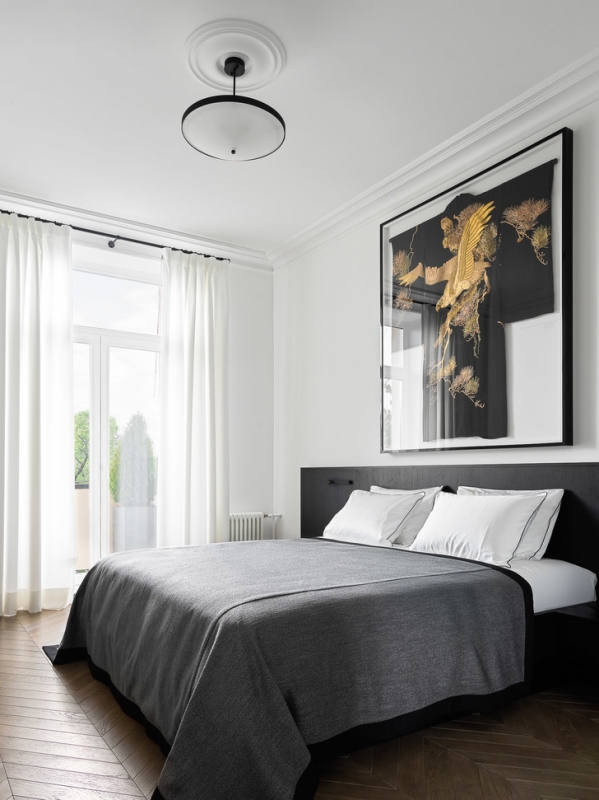 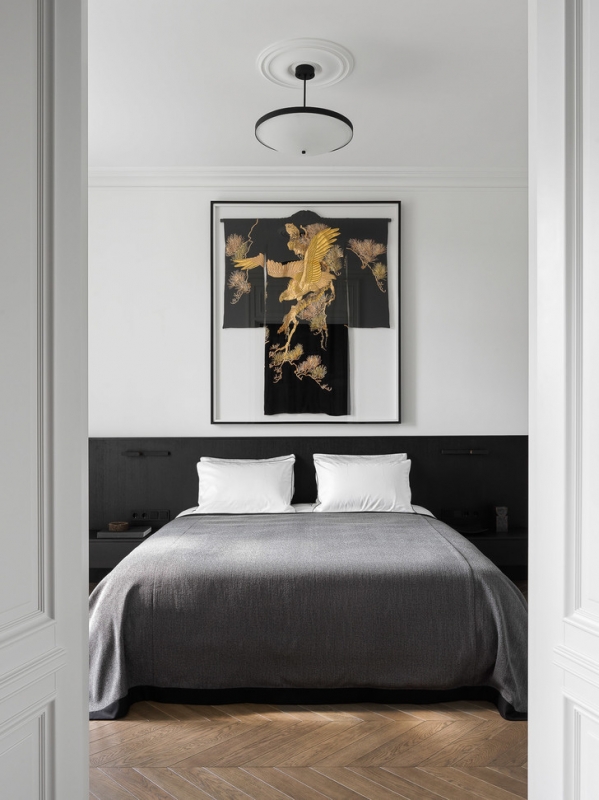 Bedroom, fragment. On the wall above the headboard there is a kimono, gold embroidery, handmade, from the personal collection of the owners.

The customers sent the original to India, where a copy was made from it — made of black “boiled” silk, with embroidery with gold thread (the technique of the cantor). For two months, several people embroidered the pattern. Now the original is kept in the personal collection of customers, no one is going to sell it, of course, and a beautiful copy hangs in the master bedroom of their house. A black lacquered box with museum glass was made for it in a Moscow workshop: the black lacquer finish was chosen by association with Japanese black lacquer floor racks for kimonos. This is really the most interesting object in the interior that deserves special attention. And the apartment itself is a great backdrop for this work of art. 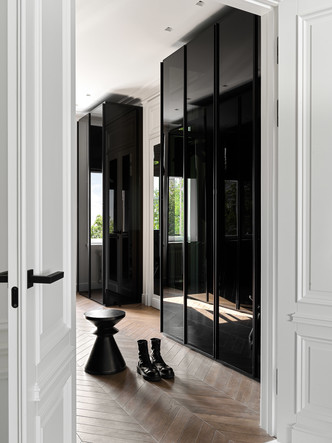 Dressing room. Cabinets made of dark tinted glass are made to order according to the designer’s sketches. 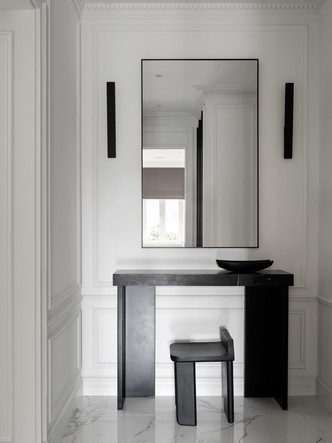 Hallway. The console with a metal base and a table top made of Nero Marquina marble is custom-made according to the designer’s sketches. Wall lamp Wever & Ducre. 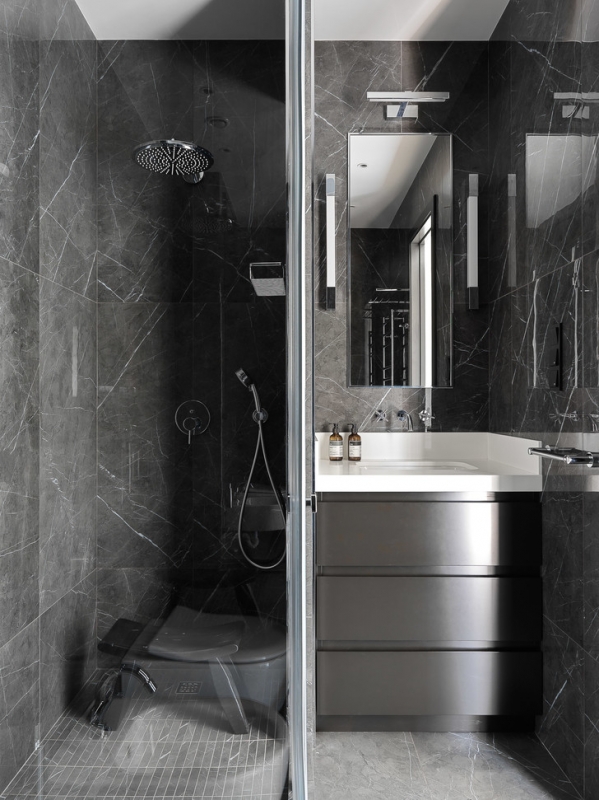 Bathroom. The cabinet under the sink is made to order. Sconce, Astro Lighting. Accessories, Grohe.