Redevelopment was done here, which allowed to expand the functionality of the apartment and fit a nursery, a bedroom and a kitchen-living room. 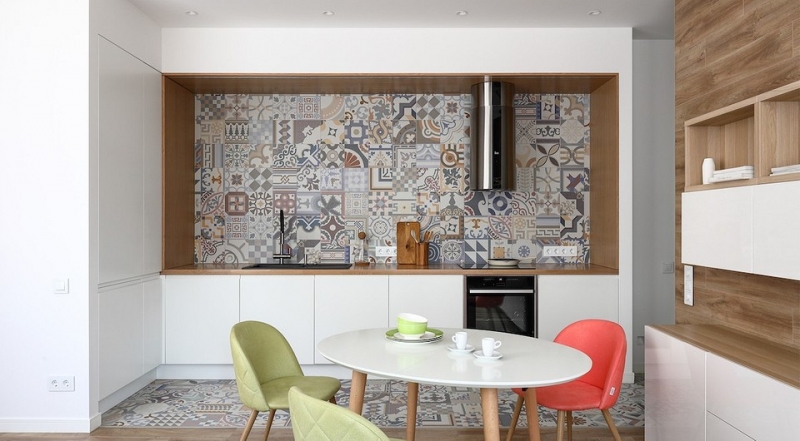 The owners of this apartment are a young family with a daughter of primary school age. They have a small dog of the Jack Russell breed. The main wish that they put forward for the future interior is the presence of a spacious kitchen-living room as a place of rest for their family and a general gathering. A bedroom and a nursery were also needed. For this, the family turned to designer Natalia Zheltoukhova. 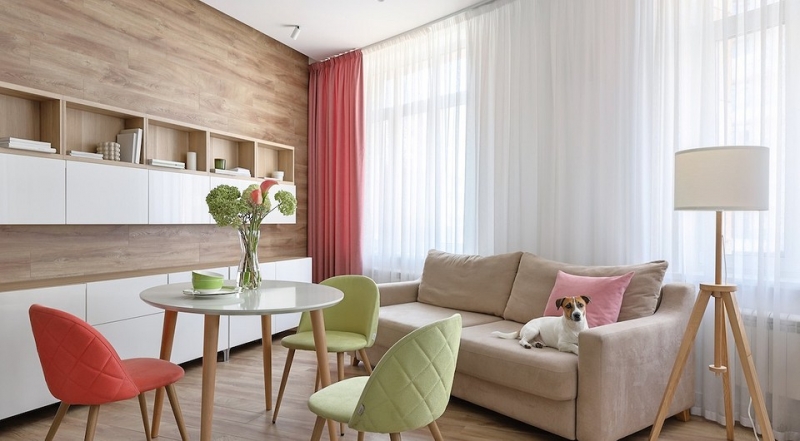 “Combining two windows with a common textile gives a feeling of air, visually expands the space and creates a uniform background for furniture. If each window had curtains on both sides, it would visually reduce the space,” the author of the project comments.

According to the original plan, the apartment had two rooms, a kitchen, a bathroom and a long corridor that led to the far room from the hallway. The situation was complicated by the fact that the wall of one of the rooms was beveled. But in any case, the number of rooms did not meet the requests of the owners of the apartment. Therefore, the author of the project proposed redevelopment. 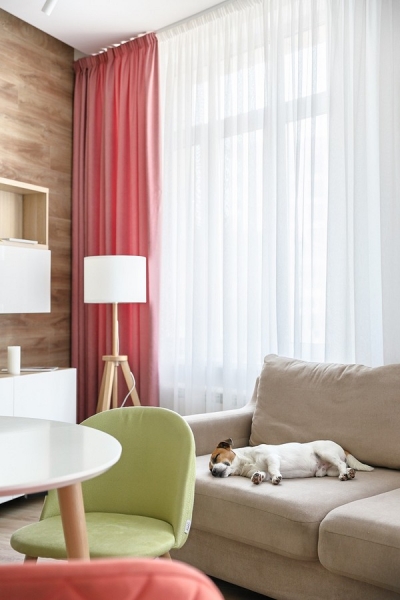 The main change affected the kitchen. It was moved to the area of the corridor. Built-in column cabinets with a refrigerator have “entered” the area of the next room a little. According to the designer, it can be coordinated as built-in wardrobes. Instead of the kitchen, the customers’ bedroom was organized. Such a solution is also quite consistent, but for this the room must be designated uninhabited. In this case, the cabinet. It was also slightly expanded at the expense of the living room. 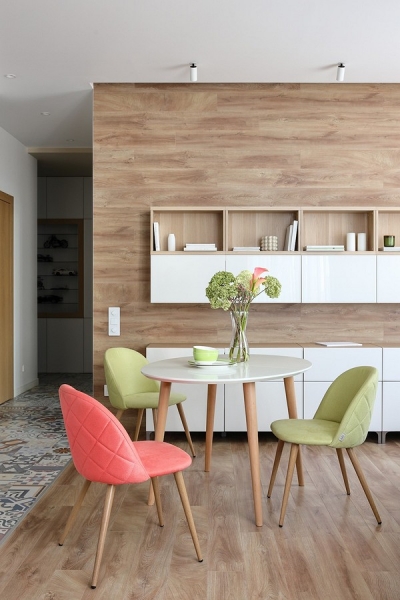 Another small change affected the bathroom. The entrance was moved and the bathroom was slightly enlarged due to the corridor. In the corridor, built-in storage systems were placed on the side of the former kitchen and living room.

As a result of the redevelopment, the owners got what they wanted: two bedrooms, a spacious living room combined with a kitchen. At the same time, the corridor space was used with maximum benefit. 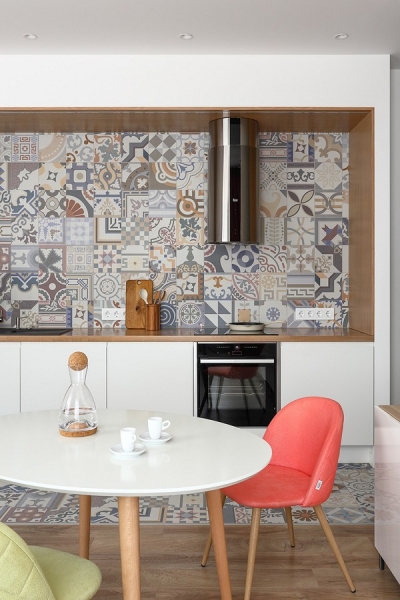 Practical materials were chosen for finishing. Laminate flooring in residential areas. In wet tiles. For the kitchen, corridor and hallway, we chose a tile with a fairly active ornament, which is also a decor in the interior. Wallpaper with a pattern on the walls in the bedrooms. In the master bedroom it is an abstraction, in the children’s polka dots, which adds tenderness to this space. In the hallway and corridor, paint was used on the walls. One of the walls in the living room was also decorated with laminate, this is a partition between the common area and the bedroom. 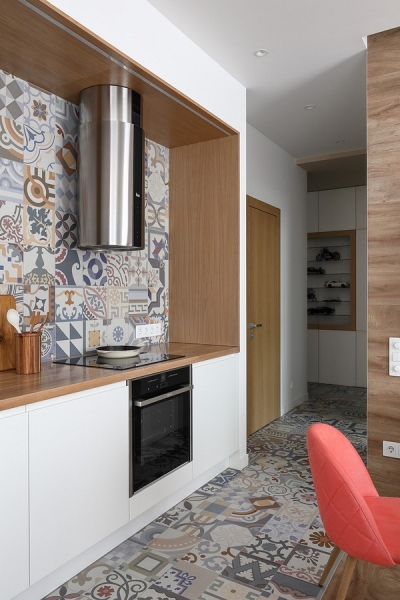 Two types of finishes were combined in the bathroom. The walls are lined with rectangular white tiles, but part of the walls near the ceiling is painted. On the floor there is a tile with an ornament in black and white.

Ceilings were made stretch in all rooms, except for the living room and hallway “Initially, a stretch ceiling was planned throughout the apartment, but due to the inability at that time to fulfill the necessary wishes of the customer (direct docking of the illumination angle), it was decided to replace it with a GCL. The main criterion in choosing exactly such finishing materials was due to the repair budget, not the most minimal, but still economical,” says Natalia. 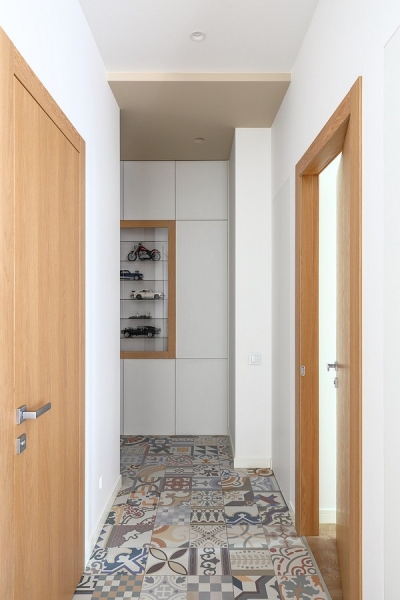 In each bedroom, wardrobes for things and shelves for storing books and decor were thought out. In the nursery also for toys. A spacious wardrobe for outerwear and shoes was also built into the hallway, which also housed a washing machine with a boiler. Built-in utility cabinets were made in the corridor, as well as a narrow cabinet with an integrated shelving, which is covered with glass. This place is intended for storing the owner’s collection of cars. A modular system with closed cabinets and shelves was chosen for the living room. 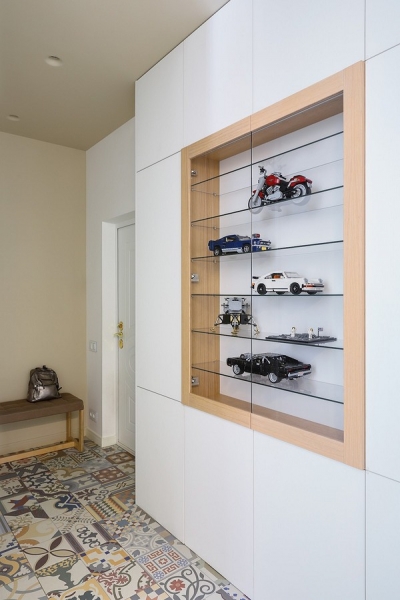 The kitchen turned out to be quite compact, but with everything necessary. “We placed a built-in refrigerator, two pull-out dish dryers, a pull-out column for cereals, a “magic corner”, a dishwasher, an oven, two sections for pots and dishes, a section with a bucket and filters and a deep storage system on the left behind a wooden portal,” says Natalia.

In the bathroom, in addition to the cabinet under the sink, built-in cabinets were made in the wall next to the toilet. 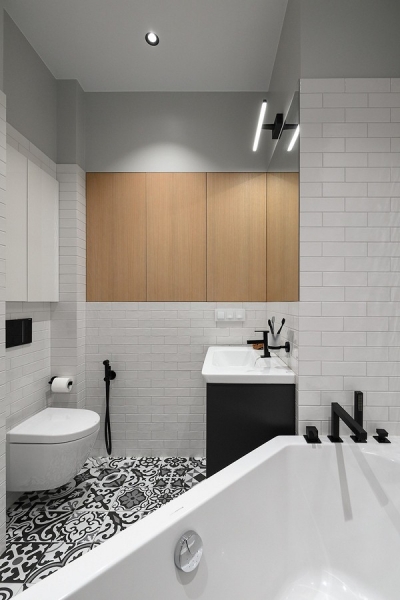 As for the choice of furniture: we combined available brands and custom-made items. “I tried to combine the budget of some items with the spectacular appearance of other items. So, the furniture of the famous IKEA furniture mass market is adjacent to more expensive brands (but also in an affordable price category). Some of the furniture is made to order according to our sketches in a furniture workshop,” Natalia comments. 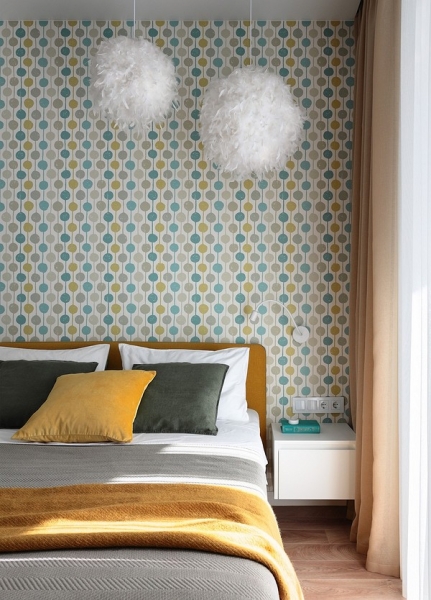 For general lighting, spotlights were chosen, which are placed on the ceiling. Additionally, we thought through different scenarios. In the bedroom there are pendants with feather shades, which perfectly match the pattern on the wallpaper and add playfulness to the interior. In the living room there is a floor lamp by the sofa, cornice lighting, a ceiling flat lamp and a linear lamp built over the kitchen work surface. In the nursery, additional lighting is decided by a large chandelier with colored plafonds, which are ideally combined with furniture, and sconces on the wall above the sleeping place. 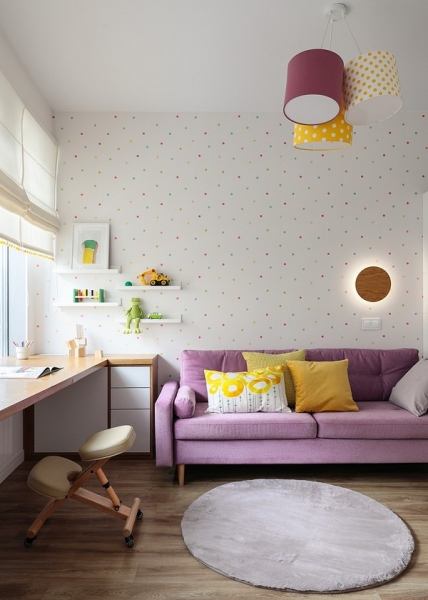 “In the hallway area, where the ceiling is painted beige, there are built-in plaster lamps. They are sewn into drywall and painted in the color of the ceiling. The lowering of the ceiling is due to technical issues, the withdrawal of kitchen ventilation into the vent, the passage of water supply pipes. We decided to highlight this area with color to justify lowering the ceiling level,” explains the designer. 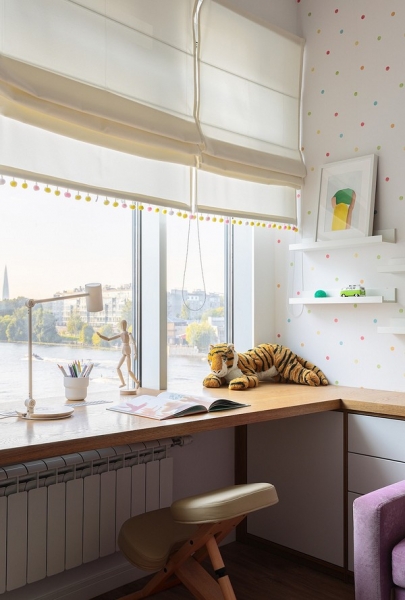 The interior is designed in light soft shades. Textiles and upholstered furniture — juicy spring flowers. The main stylistic solutions of this interior were built around a planning solution — in the implemented version, it was possible to remove a long narrow corridor due to redevelopment, and place kitchen furniture in its place. Due to this, it turned out to increase the space of the kitchen-living room as the main place of attraction of the customer’s family and add light and air to the apartment. 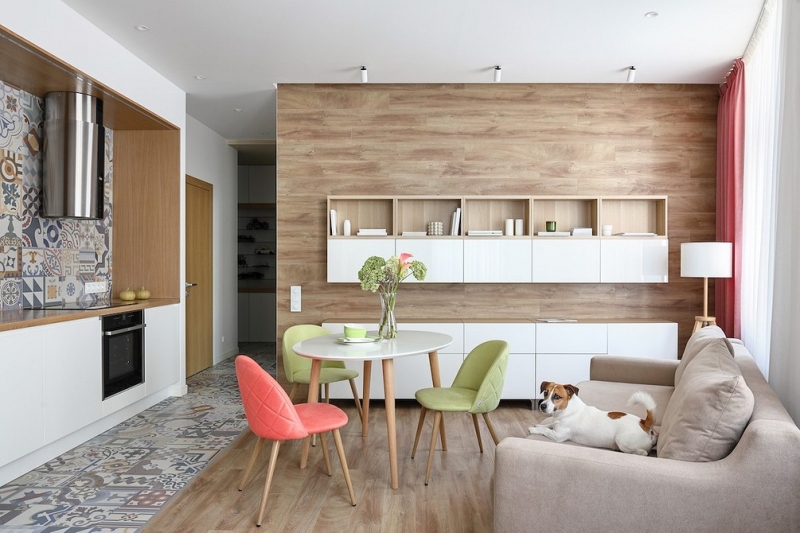 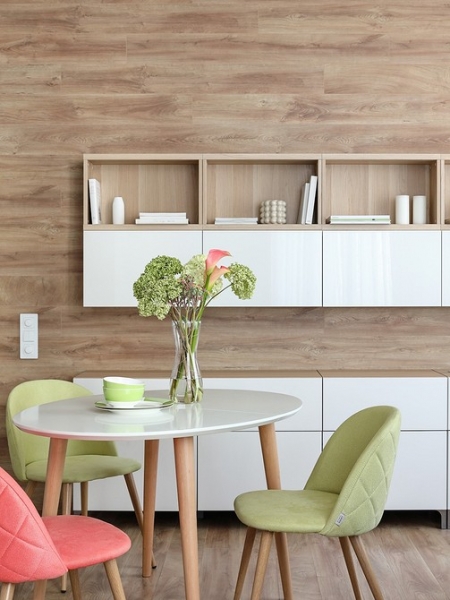 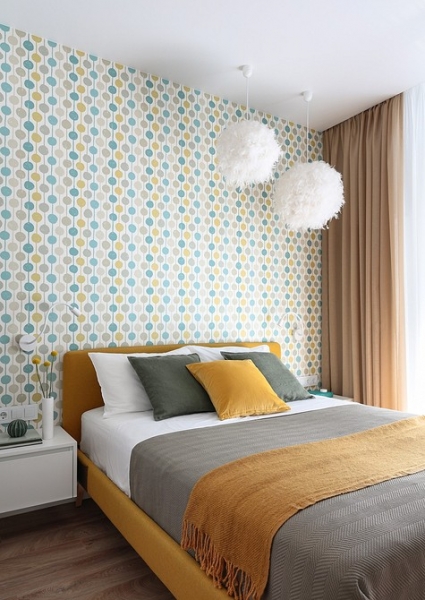 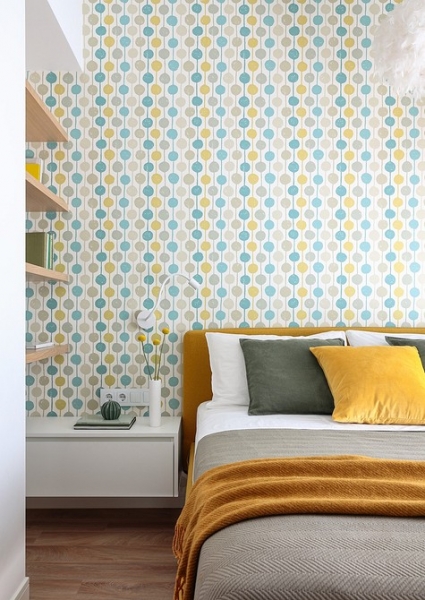 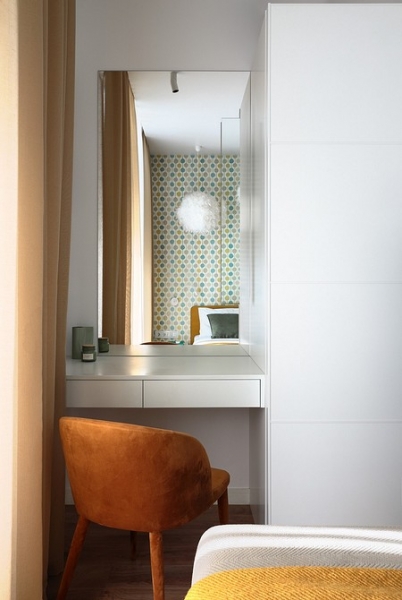 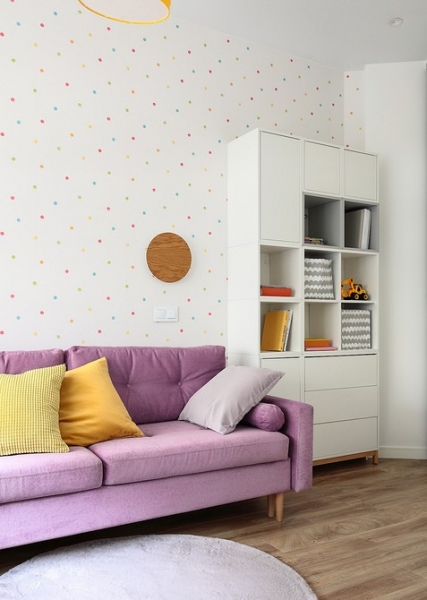 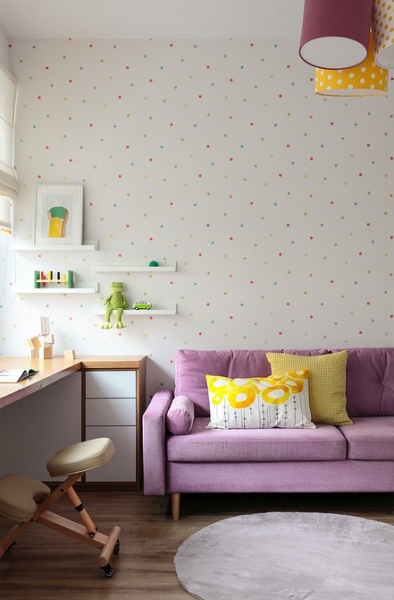 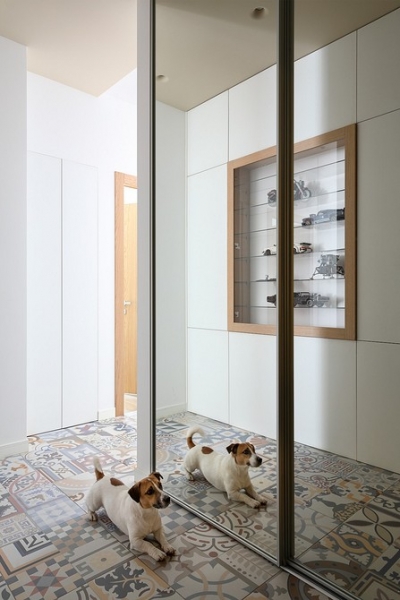 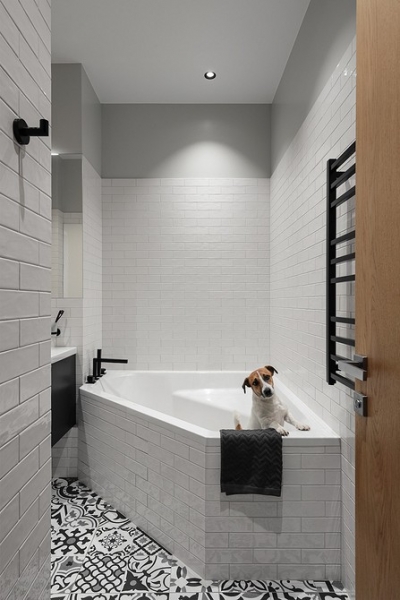 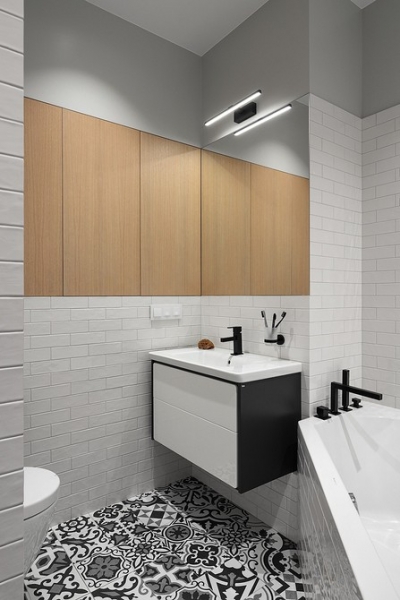 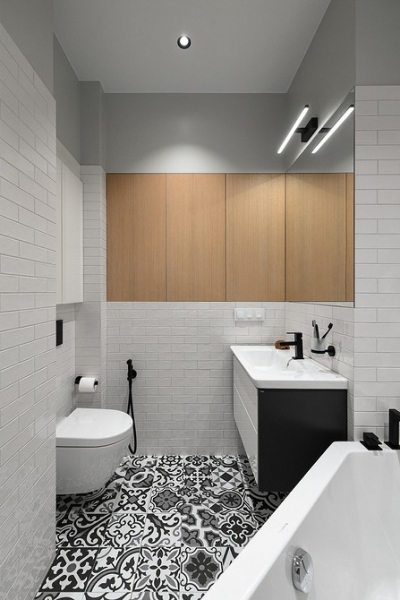 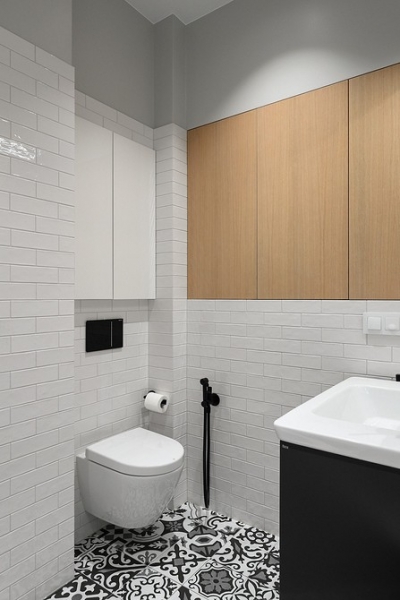 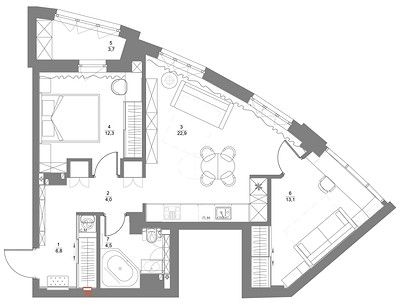