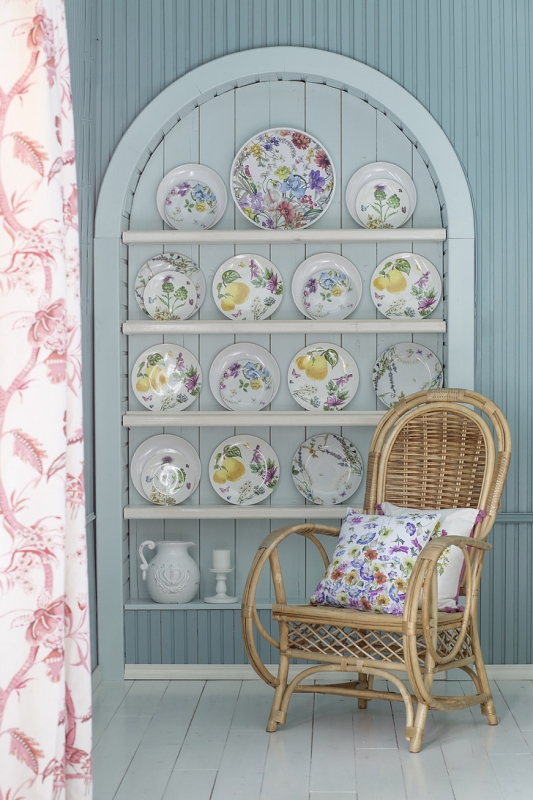 An arched doorway led to the former kitchen. It was closed and turned into a cupboard for dishes.

Yellow-lacquered clapboard in all rooms without exception, an abundance of natural pine furniture, two living rooms with leather armchairs and sofas, a microscopic kitchen and only one bathroom for four bedrooms — that’s what I saw when I first found myself in this house built in the 1990s. 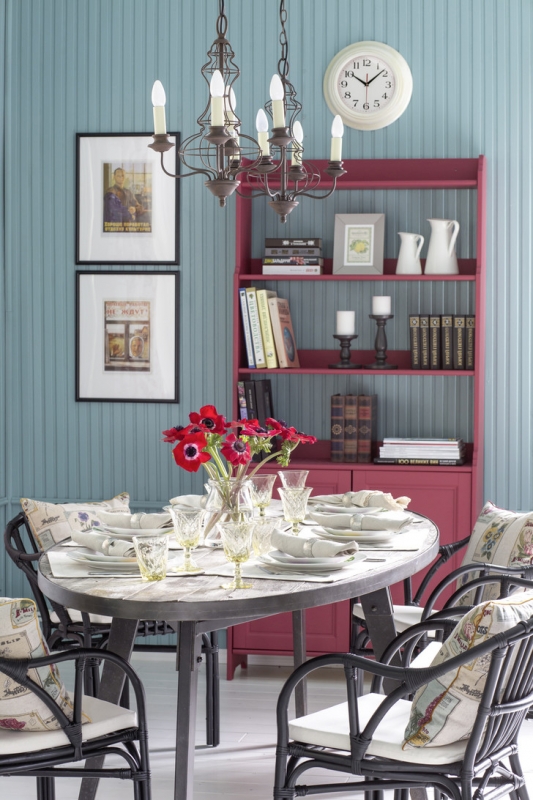 A fragment of the dining room. The wooden lining on the walls and furniture — the legacy of the previous owners of the house — were painted in bright colors. For this purpose, Masterlux Aqua paint from Dulux was used, which is applied to the surface without prior priming.

The new owners bought it, fascinated by the place. Right behind the plot is the beautiful Volga with a sandy beach, its own pier, a pine forest, around the house there is a luxurious apple orchard and lush raspberry bushes. The owners wanted to use the house as a distant dacha, where they come infrequently, but in large companies.

The main requirements of the customers sounded like this: minimum costs and preservation of all existing country furniture 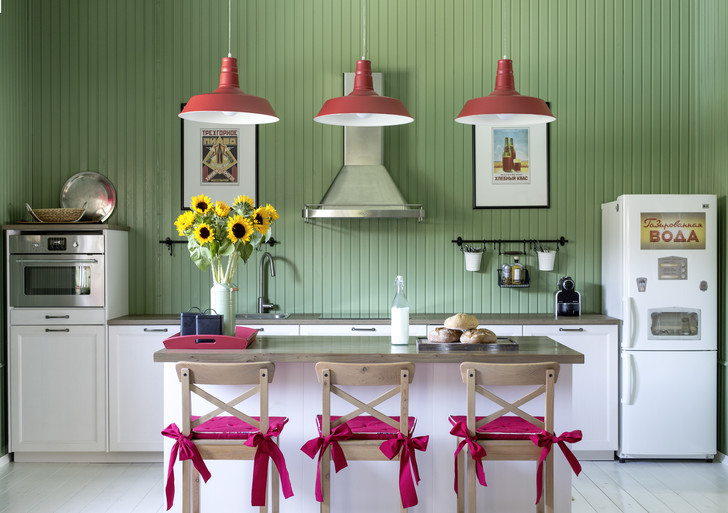 Kitchen, IKEA, elm countertop. An old refrigerator transformed a set of magnets “Carbonated water” from the studio of Artemy Lebedev. The lamps were painted on the spot from a can of paint on metal.

Therefore, I was given the appropriate task: to breathe life into dull interiors, keeping within a minimum budget, using all existing furniture. The matter was complicated by the fact that the house is located on the peninsula. In summer, you can get here by ferry, in winter, when the river rises, right on the ice, and in the off—season – on a hovercraft or by making a 120 km detour through Tver. 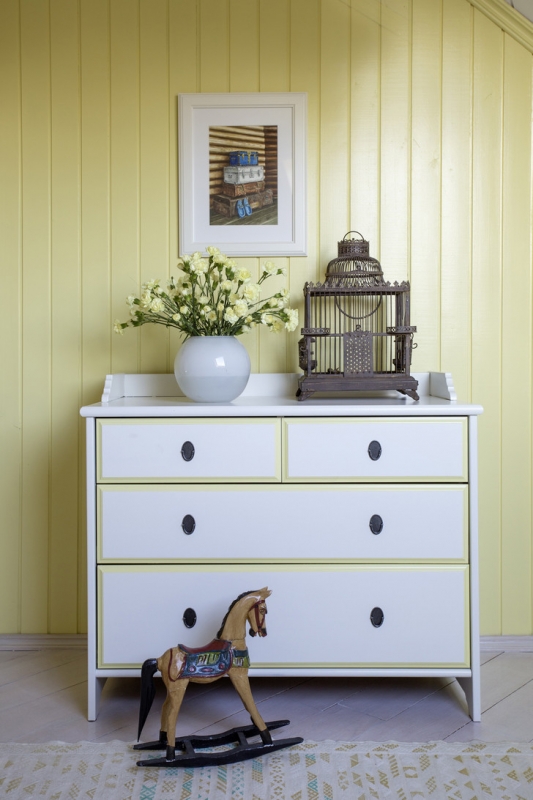 A fragment of the “Yellow Bedroom”. On the wall is a watercolor by Evgenia Att.

During my work, I have tried all the options and now I cross the Volga on ice without fear or cross on a cushion boat, taking a vase and a couple of chairs with me. Initially, it was only about the decor, but in the process of work there were several successful planning solutions that were implemented.

Unpainted clapboard is good for a bath, but it looked rather sad on the walls of living rooms 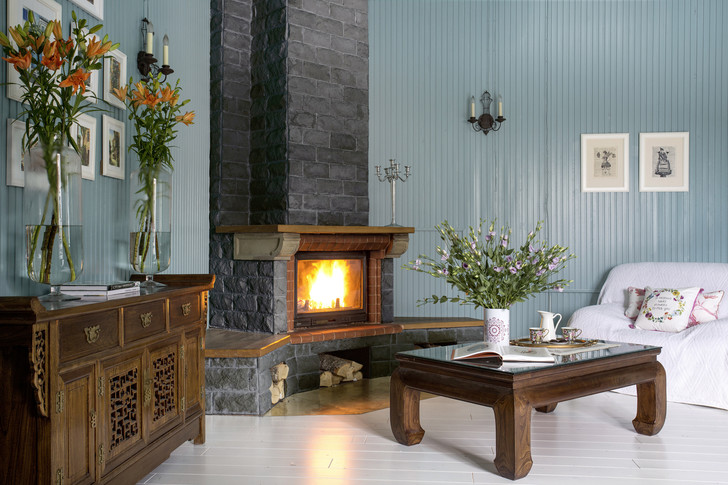 Living room. The chimney and the base of the fireplace were painted black. A chest of drawers and a coffee table are rare items that have retained their original appearance. Leather sofas were hidden under linen covers.

The former kitchen was converted into a comfortable bathroom, and the second living room into a large kitchen with an island for breakfast. In addition, the arched opening in the dining room, which previously led to the kitchen, has turned into a beautiful crockery cabinet. The owners did not want to part with a perfectly working refrigerator, so they had to think about decorating it. 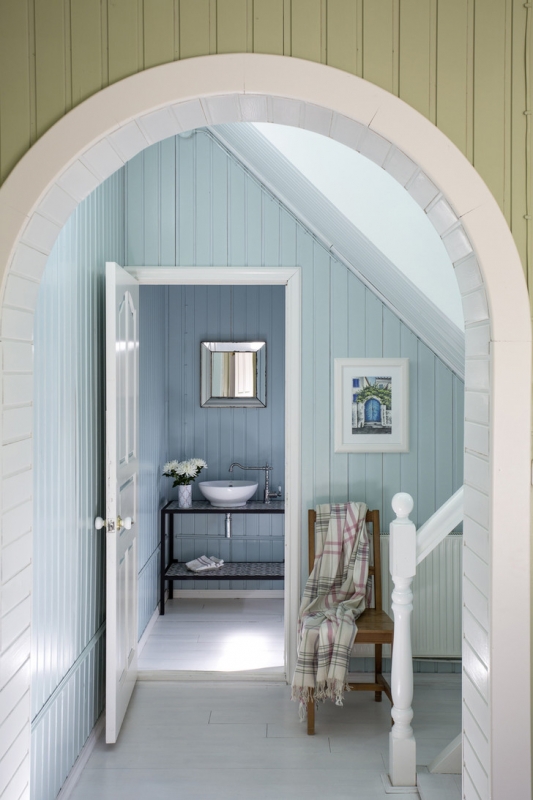 View from the hallway to the guest bathroom. The metal console for the sink is made in the decorator’s workshop. The countertop is tiled, Vives, from the 1900 collection. Sink, Roca. Mixer, IKEA. Mirror, The Furniture.

The solution was magnets in the form of Soviet vending machines for the sale of carbonated water. They brought nostalgic notes of socialist life to the kitchen, which are supported by posters of Rodchenko and Mayakovsky and dishes from the USSR. Swing doors from the kitchen lead to the dining room. 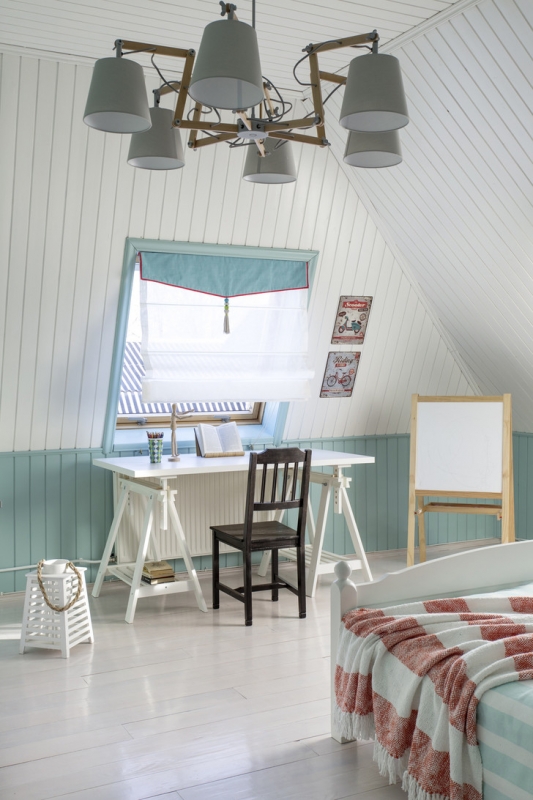 “Turquoise bedroom”. Juicy berry shades became an ideal addition to the color of the walls. The curtain made of translucent linen is fixed with the help of two cornices with hooks fixed at the top and bottom of the attic window. A workplace was placed in front of him.

To soften the industrial image of the metal table, chairs with pillows were placed around, and curtains of fresh milk color were hung on the windows. On the second floor there are four bedrooms and a bathroom. Furnished with the same furniture, all the rooms looked sad and monotonous. I decided to give them an individuality and chose my own color for each: yellow, turquoise, blue, lavender.

In the morning, roosters sing outside the windows, and a neighbor brings flowers from his garden 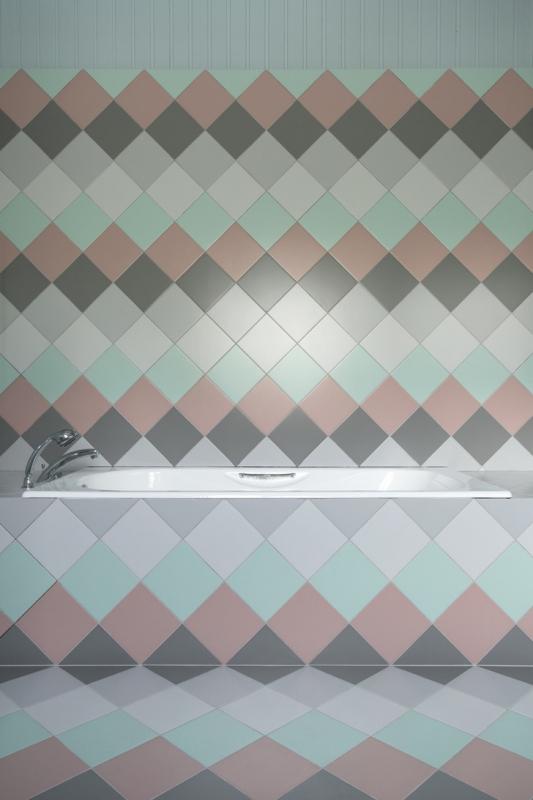 The bathroom appeared on the site of the former kitchen. Tile, Kerama Marazzi.

For ease of navigation, the panels of the bedroom doors are painted in the appropriate color. By the way, earlier, in order to repaint the lining, it would have been necessary to remove the varnish and do sanding, but modern paint perfectly lay on the existing surface without prior priming. We painted the recesses with a brush, and then covered the surface with a roller. In general, painted lining is an excellent solution for country interiors. Its vertical placement allows you to visually raise the ceilings, and its horizontal placement allows you to push the walls apart. 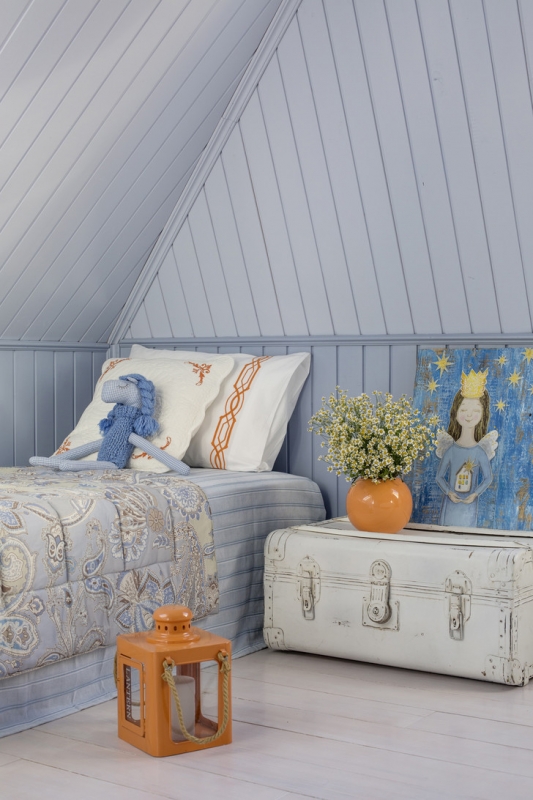 In the “Blue bedroom” there is an extra baby bed.

In combination with a white floor, it looks fresh and cozy. By the way, in this project we painted not only the walls, but also all the furniture, adding new fittings. Textiles gave the rooms a charm, and the right light completed the image of the cottage on the Volga. The joyful interiors fully correspond to the surroundings, where roosters sing in the morning, and a neighbor brings flowers from his garden. 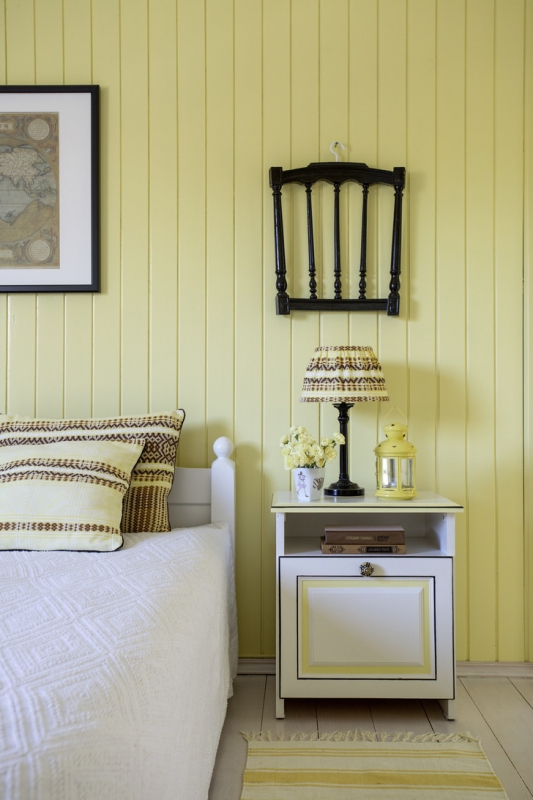 “The yellow bedroom.” Pillows and lampshade are covered with fabric with Karelian embroidery. On the wall there is a hanger for shawls and jewelry made from old chairs in the Made in August workshop. 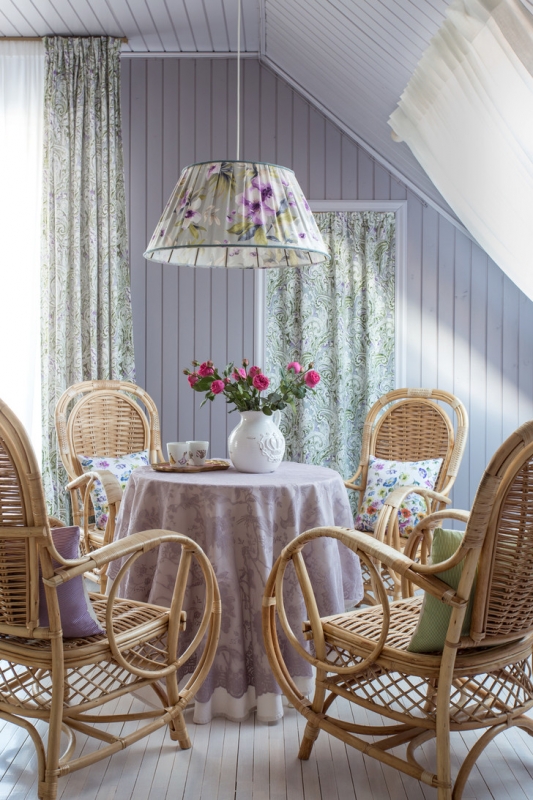 On the right, the “Lavender Bedroom” consists of two parts. The first is for sleeping, the second, with wicker chairs, is for gatherings. Fabrics from different collections were used in the design of the room.Polina Chesova