In his new column, the historian, ethnographer and owner of the Scandinavian vintage glass store Retronord Alexander Trifonov talks about Bjorn Weckstrom’s innovation and shares his impressions of visiting his recent exhibition in Helsinki. 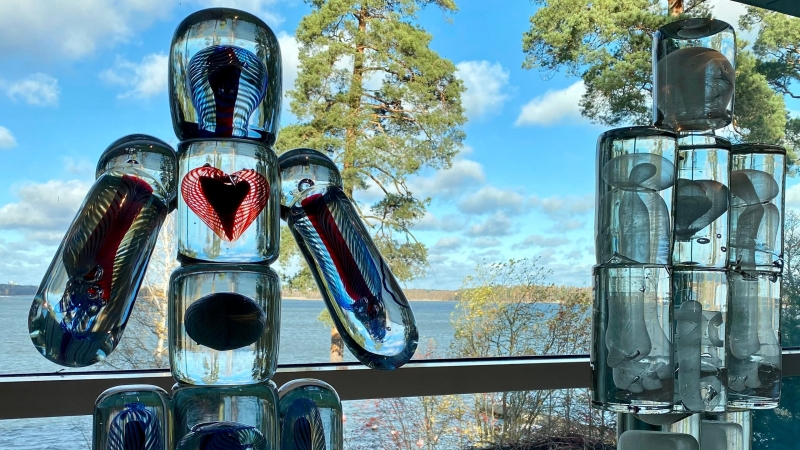 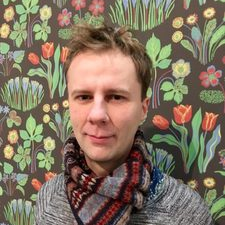 One summer day in 1958, Mrs. Aho did not come to Helsinki’s only Gallery of Modern Jewelry Art empty-handed. In her hands she had a vodka bottle full of gold dust and nuggets. The woman wanted to make a fashionable and unique jewelry out of her gold. Gallery owner (and part-time jeweler himself) Bjorn Weckstrom got down to business and, as an experiment, made a necklace of the largest nuggets, leaving them untreated.

No one has ever worked in this style of golden brutalism, Raw Gold. Nevertheless, the customer was very pleased, and offered to make something out of the gold dust that still remained in the bottle. From the dust, Wekstrom cast small ornaments in the form of mini-sculptures. They, too, were not at all like the classic gold that Scandinavian consumers of those years were used to. So Bjorn Weskstrom (and Mrs. Aho, of course) they opened a new era in the jewelry art of gold – modernism. 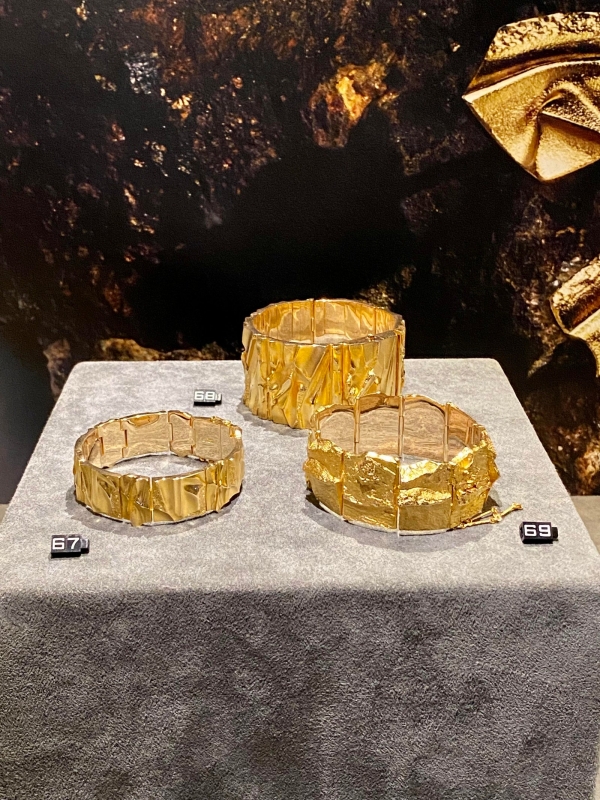 Weckstrom received an applied education in the field of jewelry. It allowed him to be at the intersection of art and craft all his life. Knowledge of the features of materials, especially precious metals, gave impetus to a radical transformation of the design of jewelry and sculpture. In the early 1960s, he became one of the creators of the innovative and iconic jewelry brand and production of Lapponia, and in 1969 he cast his first plastic sculptures, which marked the beginning of the monumental direction in the author’s work.

Bjorn was not the first jeweler in his family. His grandfather and uncle also worked with precious metals and stones. The workshop of his grandfather, John Wekstrom, in a small town in the southern part of Finland, Tammisaari, worked at the beginning of the XX century, and one of its visitors was the last Russian Emperor Nicholas II, who went there during his cruise on the Gulf of Finland.

Jewelers in Europe in the 1950s were already working with new non-classical forms, which we now know as modernist, but gold remained the most conservative part of jewelry art. Exactly the same situation was observed in sculpture: the public did not always perceive new forms, especially in public spaces, positively. Weckstrom wanted to realize himself as a sculptor, but at first he had to work with mini-sculptures on private orders.

After the incident with Mrs. Aho, Wekstrom made a massive gold pendant “Blooming Wall” in the style of Raw Gold, which he sent to Brazil for a jewelry contest for the 400th anniversary of Rio de Janeiro. And he has already received worldwide recognition by winning the Grand Prix. This is how the world learned about Finnish Vekstrom gold, a phenomenon that has remained fashionable and relevant for more than 60 years.  “Perhaps the pendant was similar to the work of the masters of pre-Columbian America, which played a role,” the designer later told about his success. 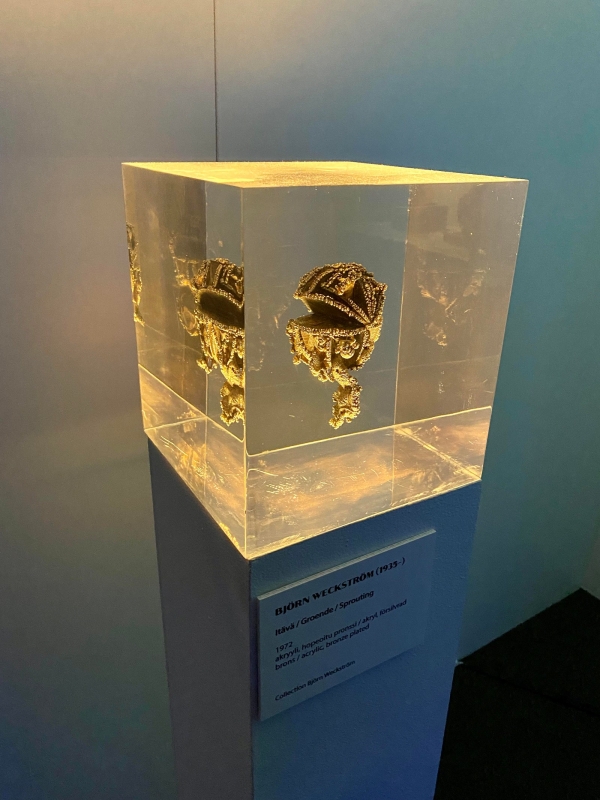 Wekstrom’s fame began with jewelry history and gold: a special attitude towards him in Scandinavia persists to this day. The Didrichsen Museum in Helsinki has just hosted a large exhibition of Bjorn Weckstrom’s works “Man, Machine and Jewelry Art”, which presented 86 pieces of jewelry by the master illustrating his professional path. It is a pity that in the conditions of the current difficult time, Russians could practically not get on it. As an eyewitness, I will try to fill this gap for the Russian reader.

“I wanted to do something fundamentally new, different”” the designer said. Before Wekstrom, it never occurred to anyone to combine gold and plastic in one piece of jewelry. The author’s choice fell on a polymer material – acrylic. “The combination of cheap acrylic and precious metal shocked people”” the master recalled. ”They did not work with plastic in jewelry, buyers did not accept it.”

And then chance came to the rescue. In the window of the Wekstrom showroom in Gothenburg, his most unusual acrylic jewelry was exhibited, including a massive ring “Petrified Lake”. It so happened that at this time the city was visited by a star couple, John Lennon and Yoko Ono. They saw the ring in the window, and John bought it for Yoko.

This content can also be viewed on the site it originates from.

Then the couple appeared on the Dick Cavett show on American television, and Yoko was wearing the same ring. He was taken several times by a close-up camera. After the transfer, orders from all over the world poured into Lapponia.

Interestingly, the era of plastic quickly passed. Along with the oil crisis of the 1970s, plastics began to fall out of use, and Vekstrom switched to more traditional Finnish art glass, as well as stone and bronze. 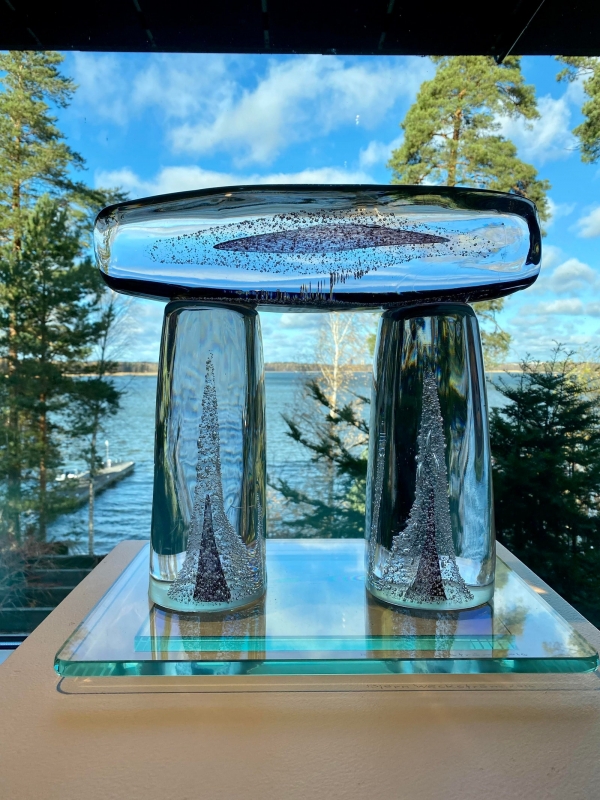 The most famous Finnish decoration

The authorship of Bjorn Weckstrom belongs to the world’s most famous jewelry originally from Finland. In 1977, the Lapponia company received a call. On the other end of the line was an American, the secretary of George Lucas, the director of Star Wars.

It turned out that Lucas had managed to get acquainted with Vekstrom’s work somewhere, and wanted him to create an exclusive decoration for the film. There was little time left, only six weeks, and the jeweler took up work, but after a very short time, Lucas’s secretary called again. This time he regretfully reported that the deadlines had shifted and there was only a week left. In such a short time, of course, it was impossible to create a new decoration.

The way out was found in the use of already created items. The designer advised me to go to the showroom of his store on Bond Street in London (the film was also shot in the UK), and choose something from there. So, in the final scene of the film, Princess Leia appeared in a silver Planetoid Valleys necklace and with a Darin bracelet. So the whole world learned about the modernist jewelry of Lapponia and Vekstrom, the Finnish jewelry art. 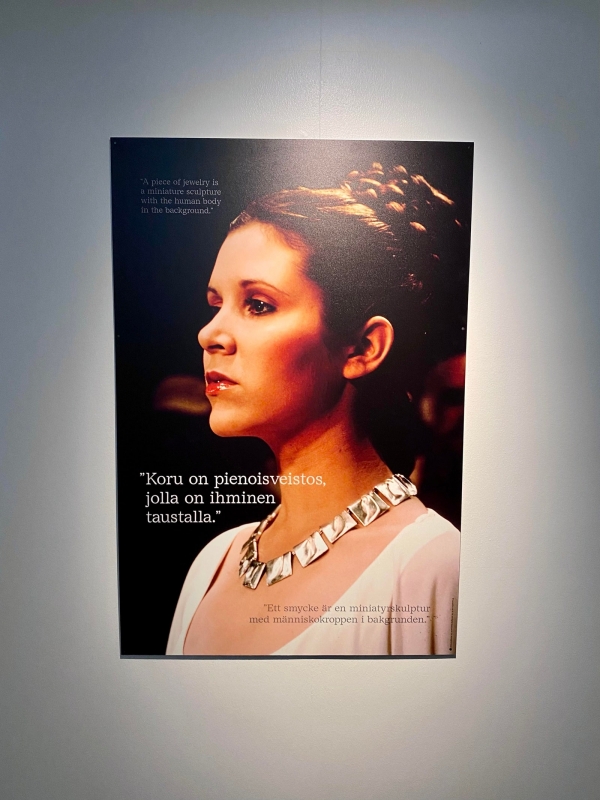 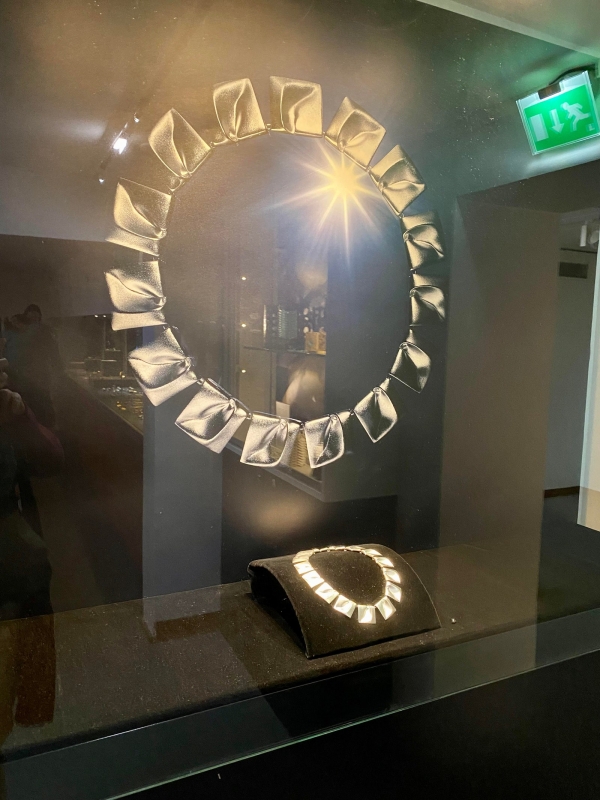 The most impressive part of the exhibition was undoubtedly the sculptures of the author. His early monumental works made of acrylic are meditative, filled with some almost unearthly energy. This period of creativity coincides with Weckstrom’s passion for Zen Buddhism.

In the 1970s, he turned to a more realistic manner, began to use images of classical mythology. By the way, it was then that he lived for a long time in Italy, which probably also influenced the language of the sculptor and the material he chose. 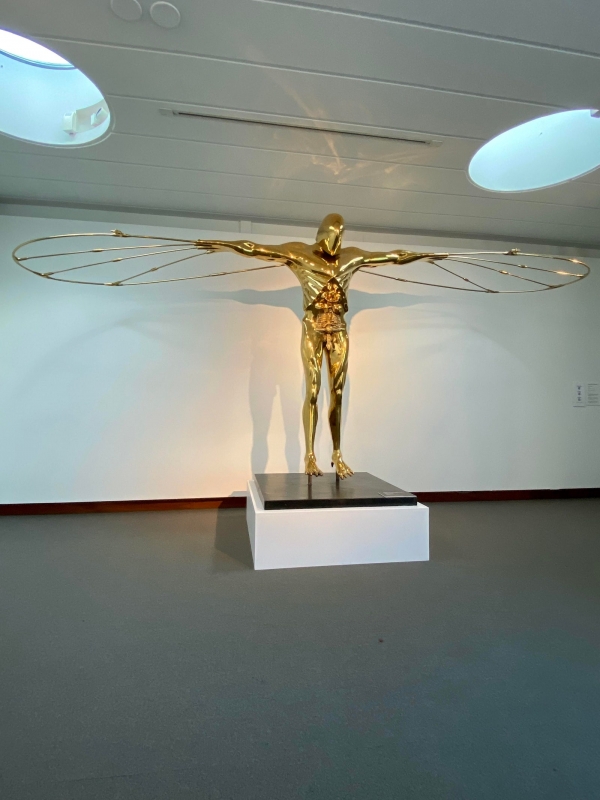 It is not for nothing that Vekstrom is called a narrative (narrative) sculptor. His works tell a story, illustrate myths in application to modern realities, whether it is the conquest of Space, genetic modification or scientific and technological progress. The language of the classical myth makes the author’s idea universal and understandable on a global scale. Like a Centaur figure, where instead of mixing a man and a horse, we have a human and a machine (motorcycle) in front of us. “How will society move forward in this inevitable merging of the world of people and machines?” Wekstrom asks. 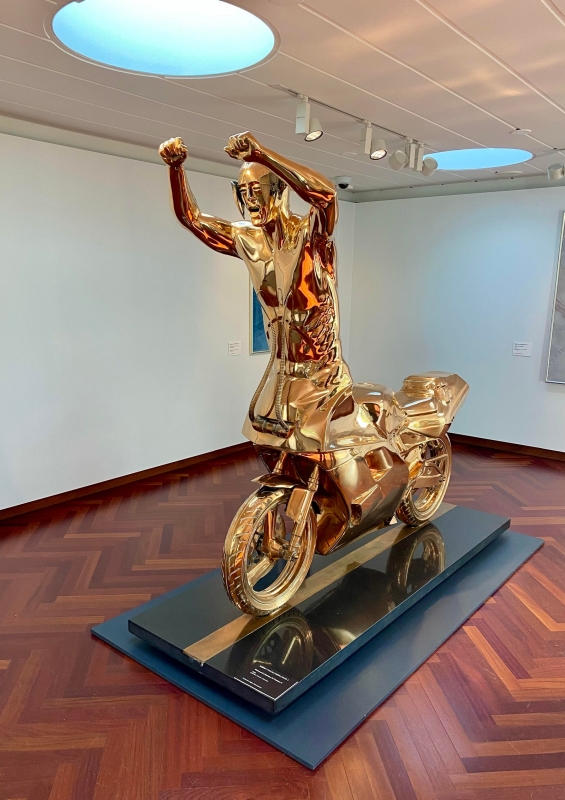 Some of the sculptures look prophetic now. For example, during the 1991 Gulf War, Wekstrom created a Blind Runner, the idea of which was our vulnerability to information distortions, different “truths” of various media. According to the author, we are all like blind people running on the ground with burning coals — in the media discord, it is difficult for a person to figure out where the truth is. 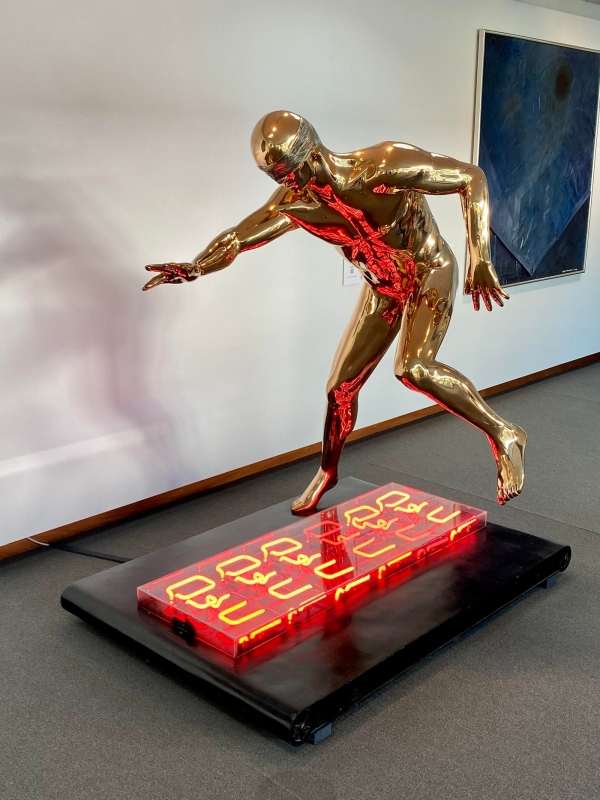 Through his works, Bjorn asks society questions, offers to comprehend the most profound changes that are taking place before our eyes. And this definitely affects you no less than his early “Buddhist” creations: after all, asking a question correctly is very often more important than getting an answer. 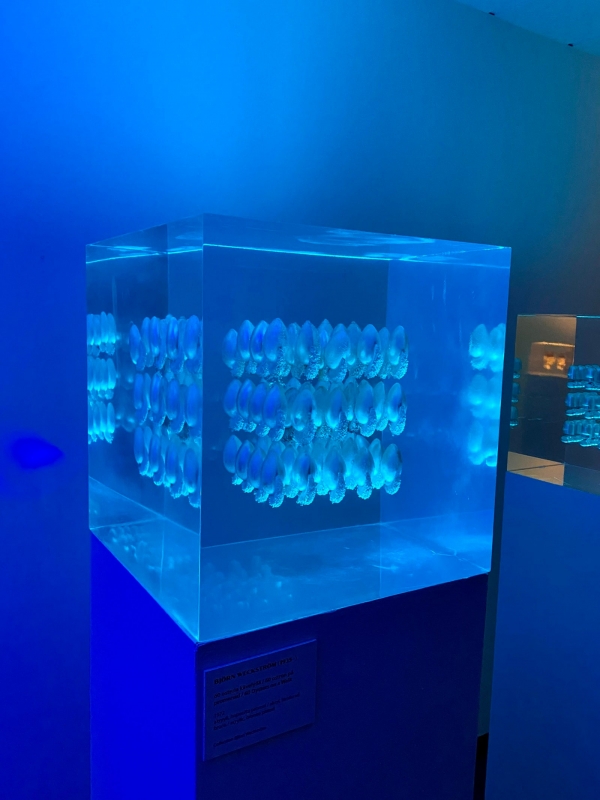