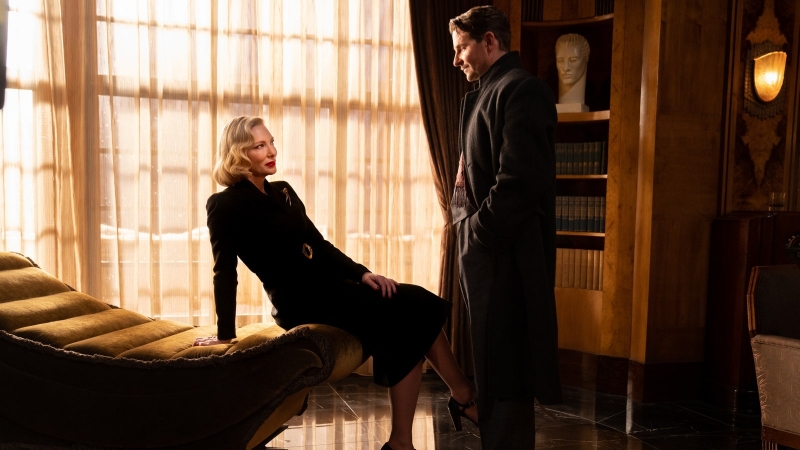 “Alley of Nightmares— is a classic noir with amendments to modern reality.

For Guillermo del Toro, it was important to create an acute adaptation of William Lindsay Gresham’s 1946 novella, which would show the whole ins and outs of show business and the “American dream”.

Paying homage to Hollywood, the film follows the fate of Stanton Carlisle (Bradley Cooper), a businessman with varying success in business, who decided to confront the rich in an unusual way. He meets Lilith Ritter (Cate Blanchett), a psychologist who helps him, and falls into a trap. The film looks like a canvas by Edward Hopper, but a little darker. There is Art Deco furniture, 1920s carnival and vintage accents that seem relevant. In other words, it doesn’t look like an old antique store mired in dust.

Tamara Deverell, the film’s production designer, did not use computer graphics (except for the scene with falling snow and flying bullets), because she wanted the scenes to have real architecture and props. ”We created a modern version of a noir film – a version of Guillermo del Toro, which has its own visual range,” says Deverell, who previously worked on the film Star Trek: Discovery. 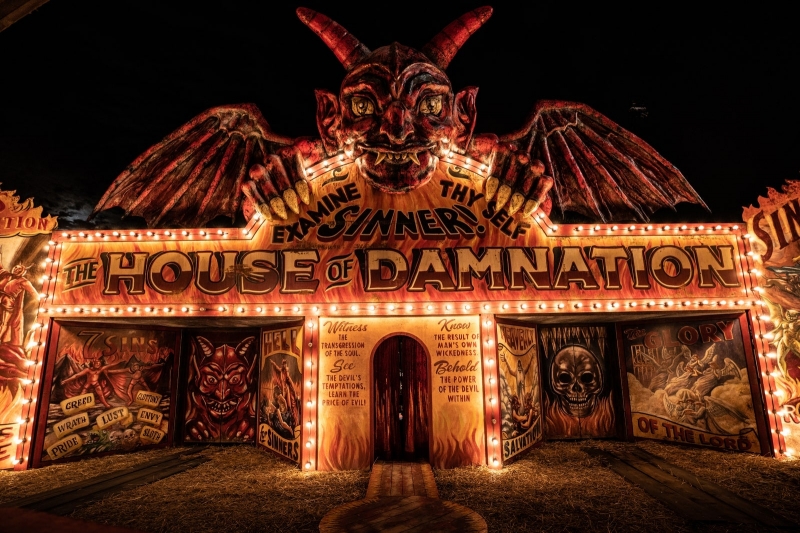 The devil’s head on the top of the house with the inscription: “Know Yourself, Sinner!” The signs were created by one of the graphic artists who worked on the project.Photo: Kerry Hayes

The first part was filmed in the mise en scene of the fair, where the whole story began. ”We did a lot of research to create the fair, there is an influence of the 1920s and 1930s,” says Deverell. The goal was to make it gloomy. “It was the Guillermo del Toro version”” she says. The key prop was a carousel that was bought from a family from Northern California. They kept it in the barn for 10 years. “We made a new top of the carousel and redesigned the lighting,” says Shane Vieux, a scene decorator. — We refreshed the horses, but we didn’t touch the whole original mechanism.”

The second part of the film takes place in a resplendent 1930s office in Buffalo, New York. The team shot these scenes at Buffalo Pictures Studios and at The Carlu in Toronto (a modern restaurant), as well as at the R.C. Harris Treatment Plant, which was used as the office of Ezra Grindle (Richard Jenkins), a factory director with a dark past. “Every line and curve, every object is reminiscent of the Art Deco era in the 1930s,” says Deverell. —We were inspired by things like the emblems around Rockefeller Center.” 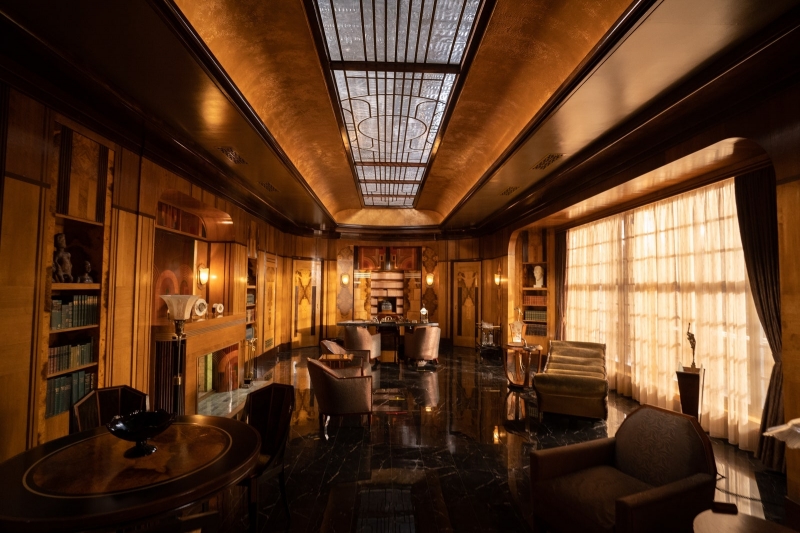 Approximately 80% of the sets were built at the studio, including the office of Lilith Ritter (Cate Blanchett). Most of the art deco furniture is at CooCoou27, at Queen City Antiques in Buffalo, at the Finch Hudson showroom in Hudson, New York and at NYC Modern Mount Penn, Pennsylvania. Photo: Kerry Hayes

One of the key sets in the film is Blanchett’s office, which was inspired by furniture from the Vail-Worgelt study of the Brooklyn Museum – an Art Deco cabinet designed by Henry Redard in the 1920s for a wealthy client. “I wanted it to give room for thought, to have clean lines here,” says Deverell— “It’s a combination of straight Art Deco lines and curves, which Guillermo really likes.” 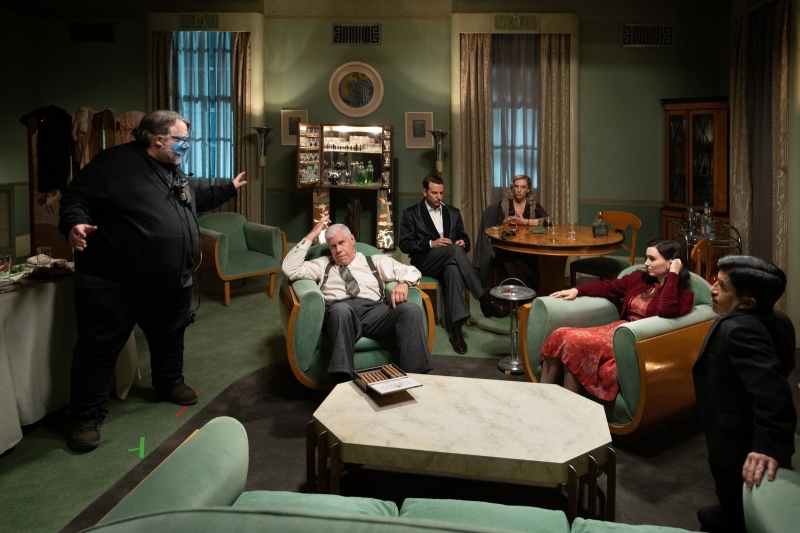 The architecture helped to show the characters of the characters more clearly: Blanchett’s office with an angelic light, because the character sometimes performs heroic deeds. “We mostly see Lilith in the office, so we wanted it to be the scenery of a strong woman, a woman who can stand up to an opponent,” says Deverell— “She’s smarter, more beautiful, more sinister than Stan.” More examples: a gloomy background filled with black furniture, where Cooper comes up with his schemes, or a devilish-looking Grindle office, which is almost dark. 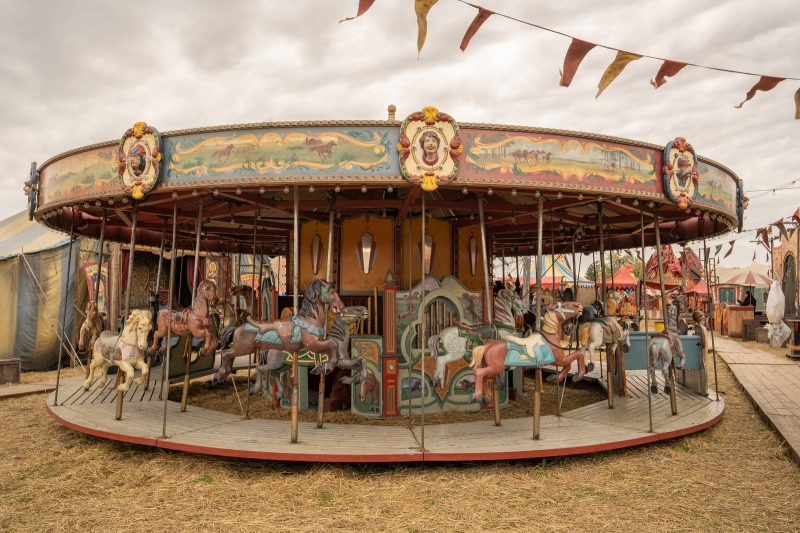 The carousel of the 1930s was bought from a family from California, who kept it for about 10 years. The carousel was restored. “We repainted every horse,” says Tamar Deverell— “I carefully painted every figure””Photo: Kerry Hayes

Natural marble was used in all the decorations, and the walls were additionally varnished for more shine. ”We gilded the ceilings in the rooms to enhance the glow,” says Deverell. The scenery reflects one of the most important layers of American history, as Buffalo presents the most famous Art Deco architecture in America (Buffalo City Hall was invented by John Wade and George Vitel, and the friezes were made by sculptor Albert Stewart). ”The elevator alone is a work of art,” adds Vieux.

Blanchett was delighted with her heroine’s office, which had Art Deco chairs. “Amazing angular lines that remind me of Kate,” says Vieux. The Oscar-winning actress expressed her delight at Deverell’s work while she transformed herself into a character of the 1930s. “I had no words—” says the production designer. —It wasn’t an easy set, but it gave so much character.” 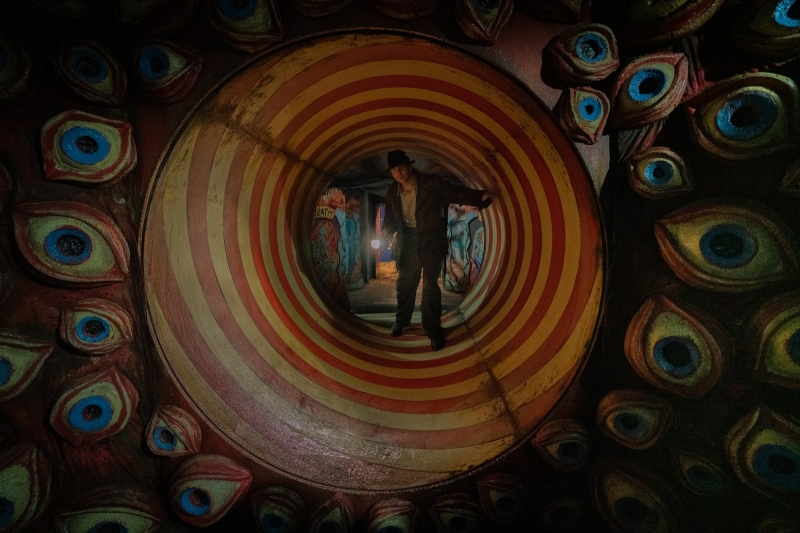 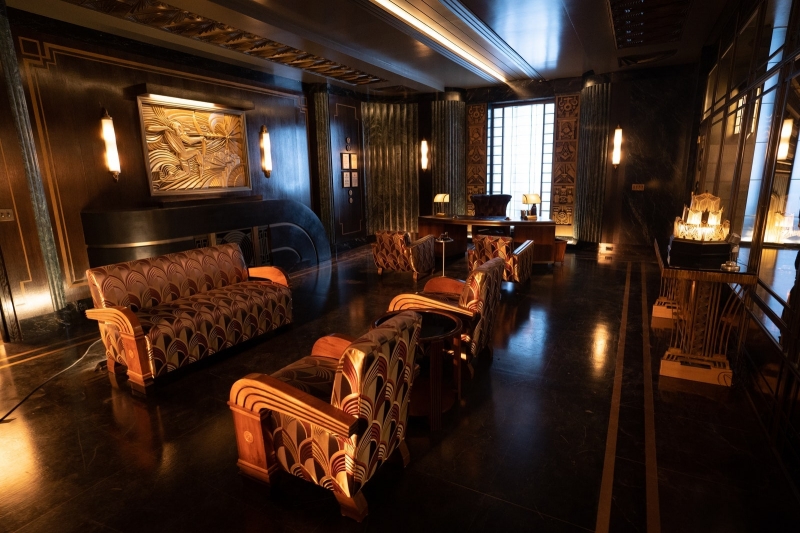 Another shot of Grindle’s office filled with Art Deco upholstered chairs. The feeling of each office was supposed to remind of the authoritarianism of its owner.Photo: Kerry Hayes 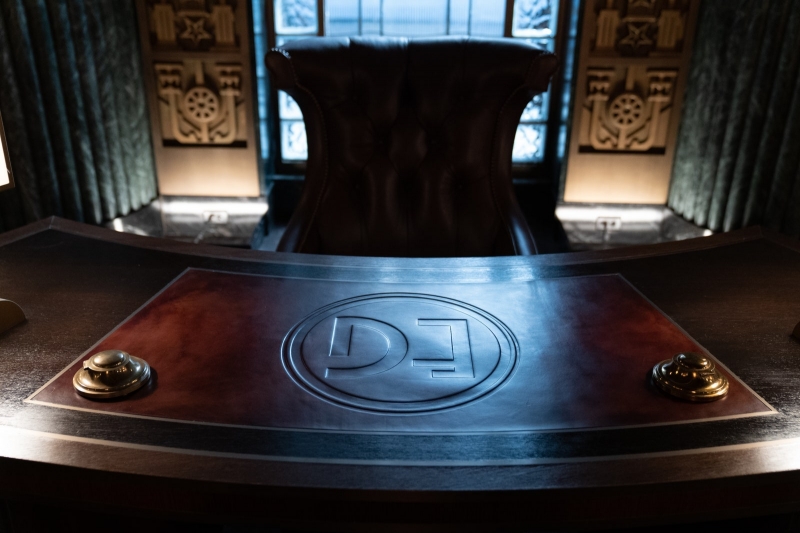 Inside the office of Ezra Grindle (Richard Jenkins), a sinister director with a dark past. His initials are visible on the desk.Photo: Kerry Hayes 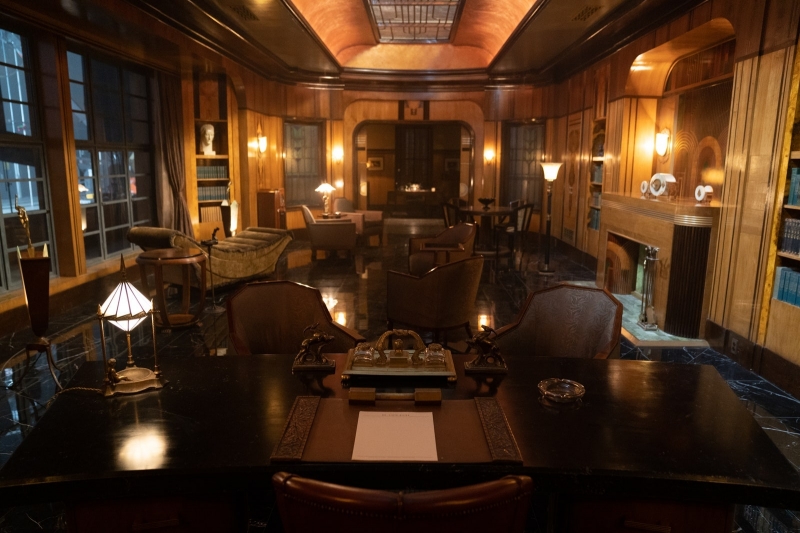 The office of Lilith Ritter (Cate Blanchett), whose furnishings were inspired by the Art Deco classics of the 1930s. “There is a lot of wood in the office. Feels warm and shiny. The geometric design demonstrates the strength of the character of the heroine, and the arches and curves — her femininity,” says Deverell.Photo: Kerry Hayes 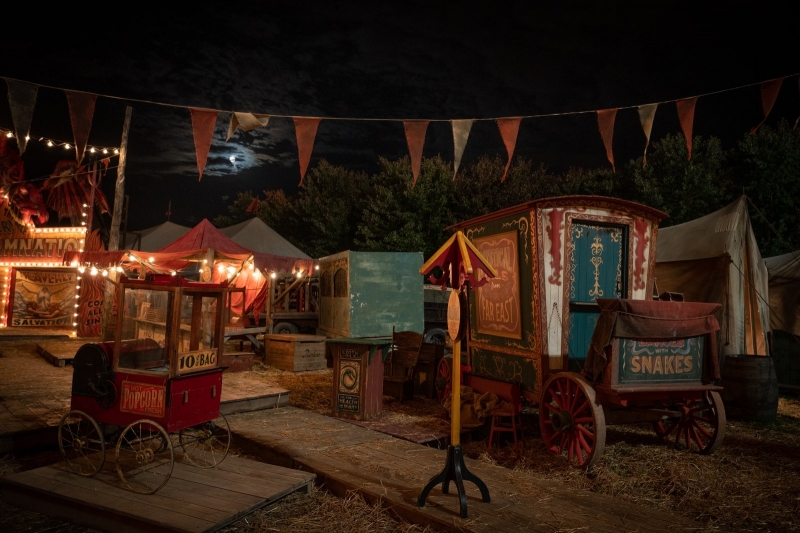 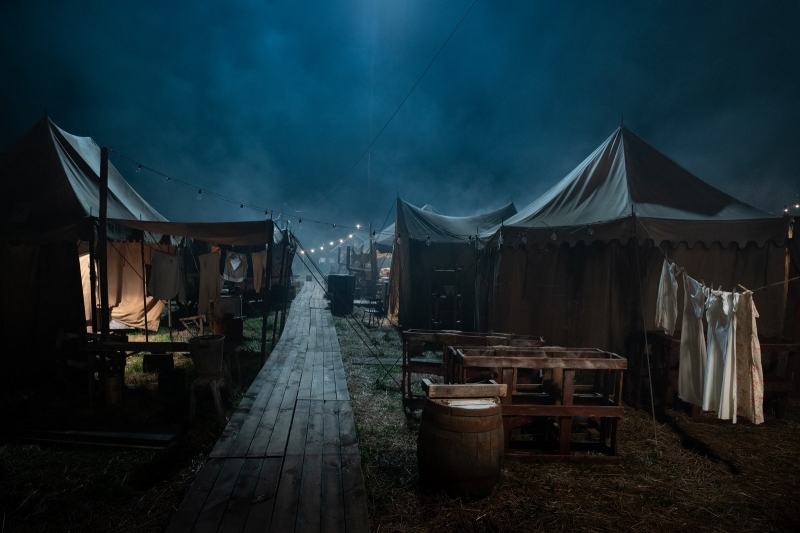 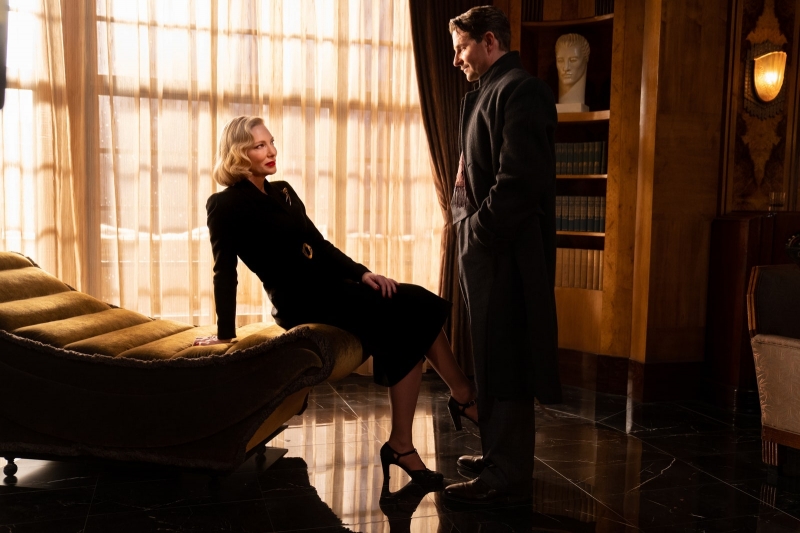