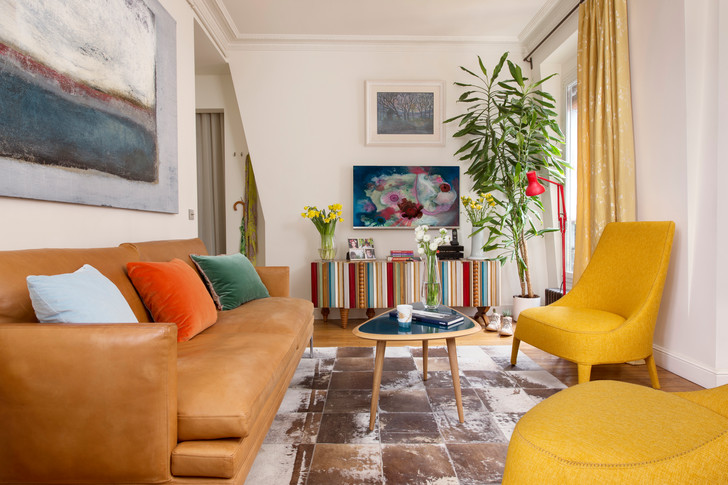 Living room. Sofa, Zanotta. Chairs, Maxalto. Chest of drawers, Lola Glamour. Above it is a pastel by Evgeny Zhukov.

“Paris is more from Montmartre than Montmartre is from Paris” — this is the local saying. Montmartre itself was a haven for creative bohemians until the 1910s, when artists pushed by the development boom began to move to the Left Bank. Anyway, the attic apartments in Montmartre are still flying like hot cakes. Even the smallest ones — with an area of 9 square meters, with a communal bathroom on the floor and without an elevator. 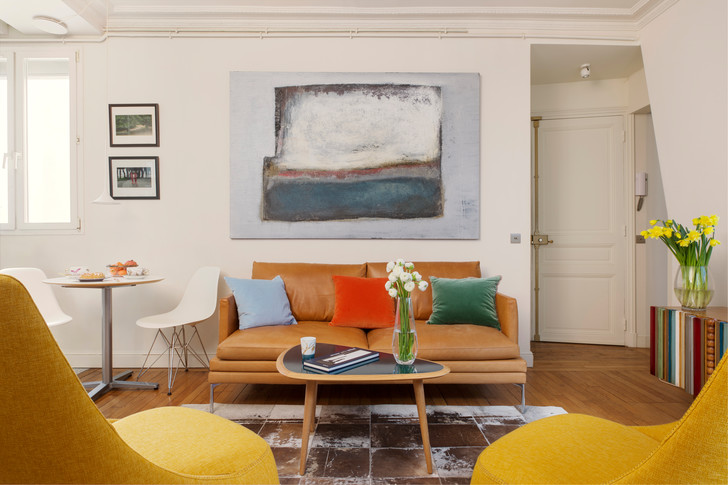 We were more lucky — a full forty square meters under the roof in Montmartre! Five Windows, a surviving fireplace, 2.8 m ceilings, a separate private bathroom, a view of the bell tower of the Sacre Coeur Basilica and an elevator! This could not be missed. The realtor had to be persuaded to reject other applicants. 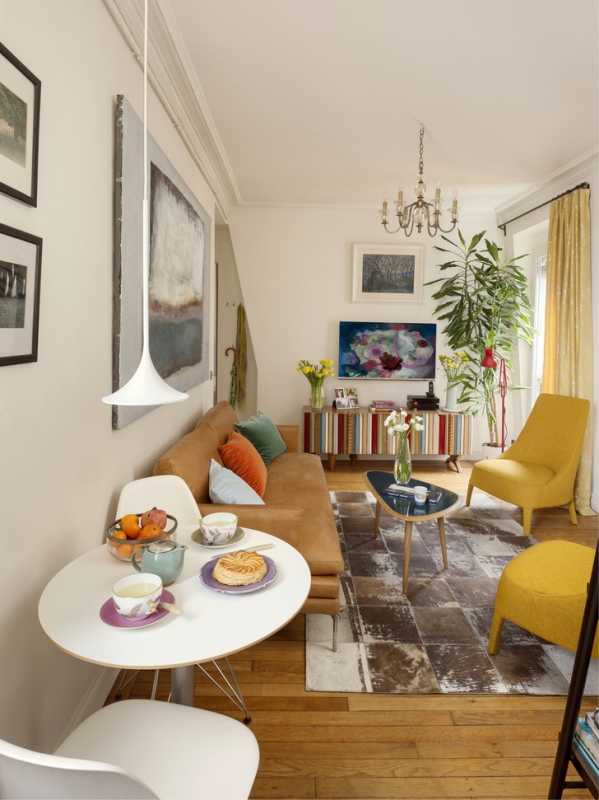 The smaller the area, the more jewelry and thoughtful the architect’s work becomes

Two perpendicular partitions and one load-bearing wall with a chimney seemed to leave no room for redevelopment. But the challenge is accepted! The main thing was to place two isolated rooms, combine the kitchen with the living room and make a transom window into the bathroom from the kitchen side so that daylight was everywhere. 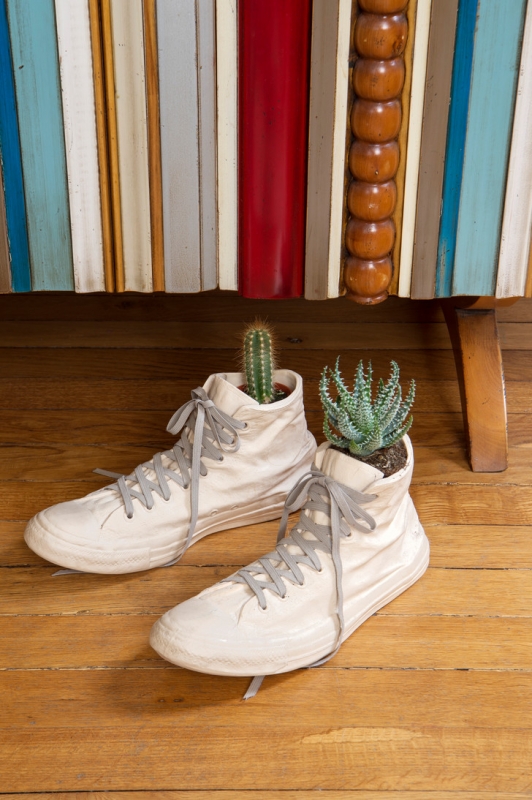 In search of lost finishing materials, we gladly joined the favorite game of Parisians — chiner. Literally, this translates as “digging in junk”, this is the name of the process of searching for items of a given style and time, it occurs mainly at flea markets and, if successful, is a source of pride for the Frenchman. 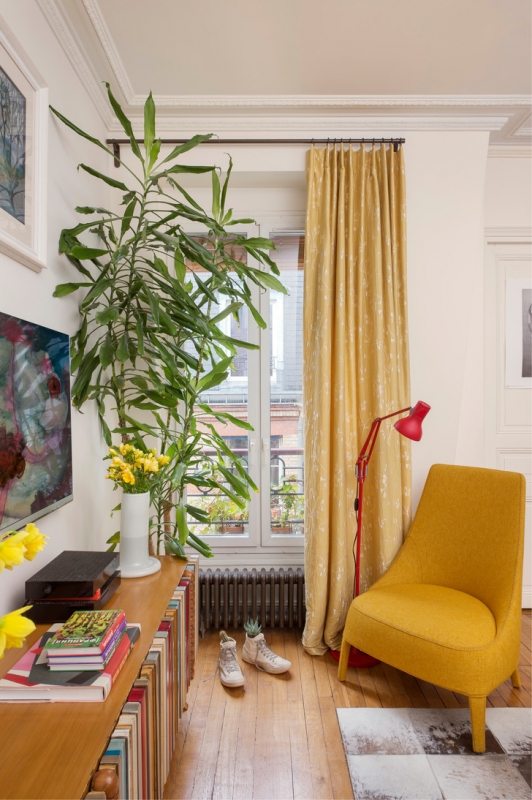 The missing fragments of the old creaking parquet became the main trophy of our hunt. Lacquered oak dies with exactly the same texture and color as in our apartment were found during the analysis of… the former gym. 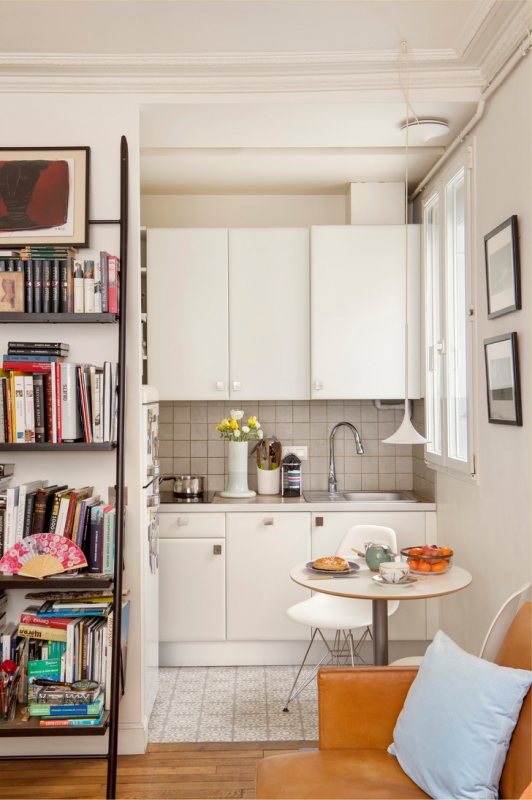 There was no heating wiring, as well as the radiators themselves, in the apartment. They were also searched for on the flea — cast-iron, century-old, suitable in size. They selected stylized shut-off valves, laid open wiring with copper pipes, because to smash the attic wall is equivalent to just laying a pipe down the street! 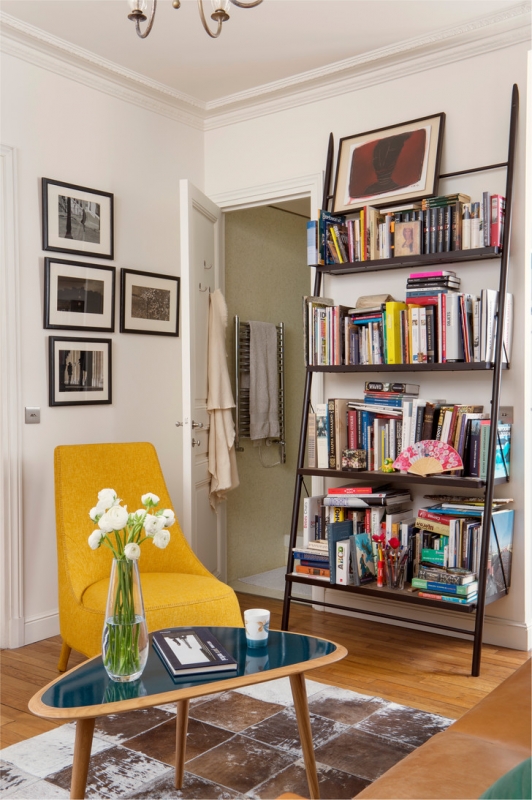 When choosing a color, we turned to the Argile palette. They have an amazing natural-based Terre Blanche paint. It absorbs all the lighting and, like a chameleon, changes depending on the time of day, the weather outside the window, reflexes from furniture, curtains and other surfaces. She is white and not white at the same time. I would call it “natural”. As if created by nature itself, it can have a color and be transparent, emphasize the outlines of stucco molding, door panels, and maybe dissolve them. 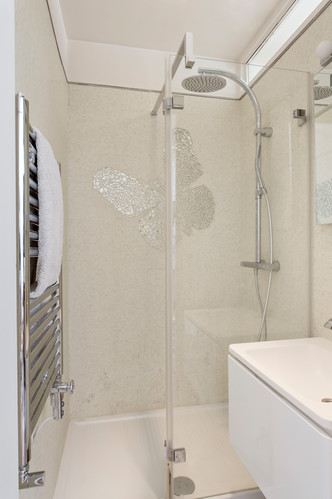 On the shower wall there is a butterfly made of mirror ceramics, the work of Ilya Sologubovsky. 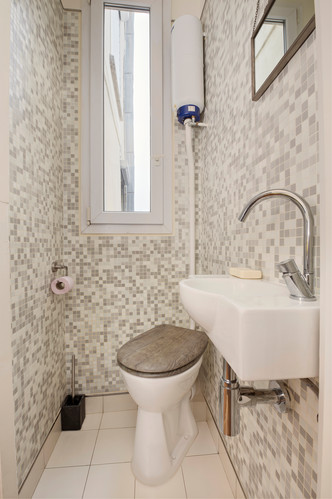 Red, yellow, and blue shades of furniture and paintings slip through the interior with colored tracing dotted lines. A striped Lola Glamour chest of drawers, a French designer chandelier of the 1960s, a minimalist tobacco-colored leather sofa Zanotta, Maxalto armchairs in the current yellow coloring, plastic from Vitra and a Philips lamp — all together they form an architectural and design cocktail, all the ingredients of which, as in haute cuisine dishes, have their own bright taste, but do not clog others. 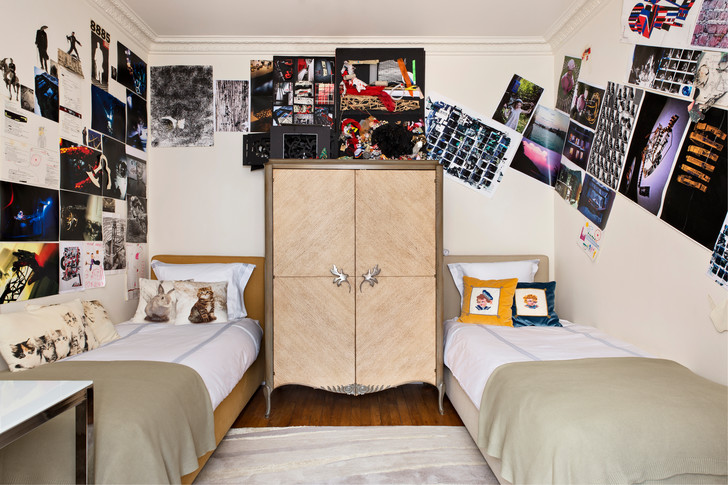 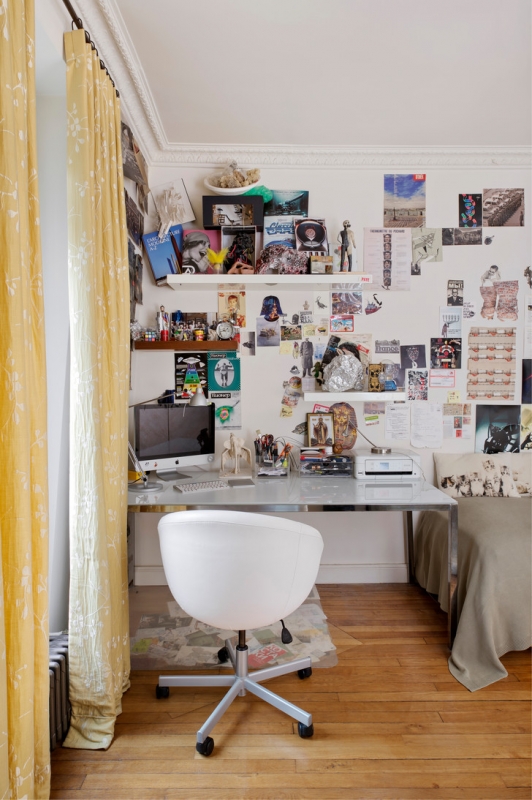 The missing fragments of plaster stucco were modeled in Moscow and transported in suitcases to Paris. Table, Ikea. Curtain rod, Corler.

There were stories typical of old Parisian houses. The 140 cm wide bed did not pass through the narrow spiral staircase. It had to be sawed in half and assembled on the spot. 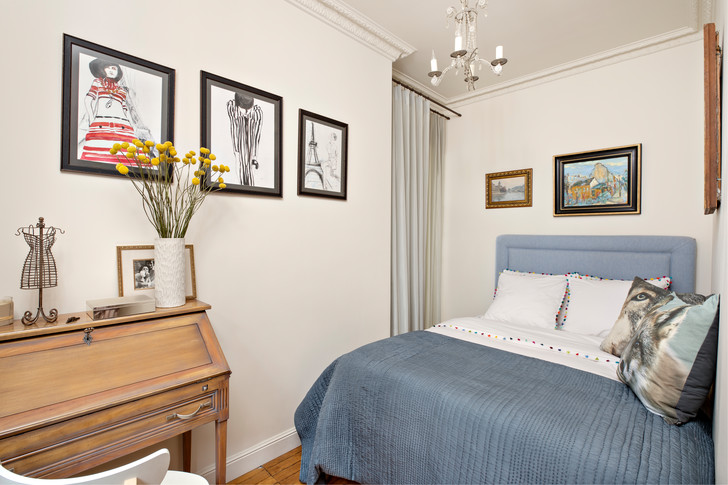 A textile curtain instead of a bedroom door saves space and at the same time creates a theatrical effect. And the French fleur is responsible for the Trompe-l’oeil (“deception of vision”) made in the style the fabric with the image of the library separating the mini-dressing room. 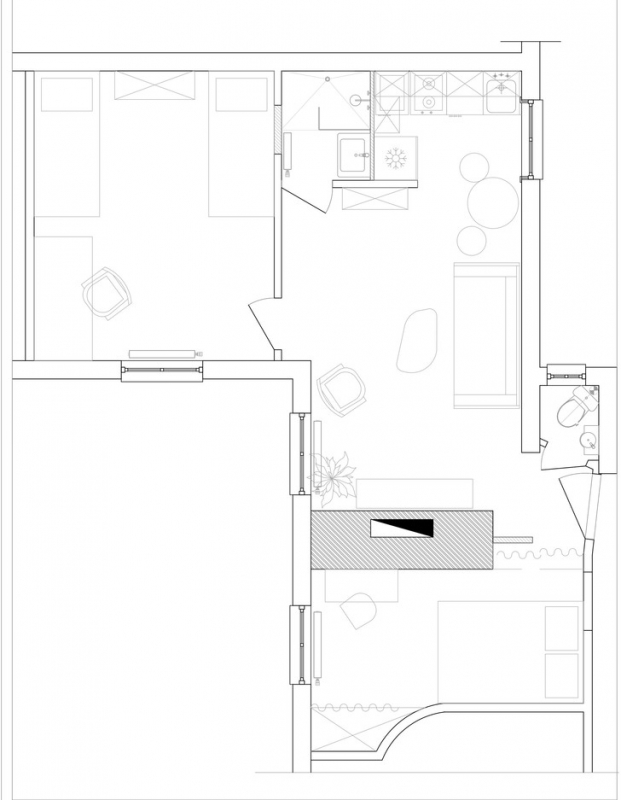 The layout of the apartment is 40 m2, the project of Ilya Sologubovsky, www.studiodeco.ru .