The designer designed the interior of the apartment for rent. Thanks to the color and non-trivial solutions (like an apron made of wallpaper), the interior does not look banal and attractive. 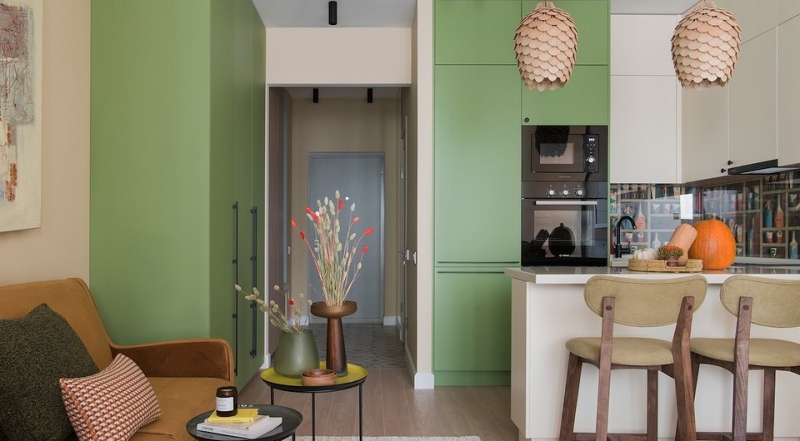 The owners of this studio in the Moscow residential complex “Liner” are long-time clients of designer Anna Gromova. They asked Anna to create the interior of the apartment for rent. It had to be done quickly, relatively inexpensively and brightly. Among the mandatory items were a full kitchen with all appliances and the presence of a bed. It was necessary to place several functional zones on a small area ambitiously, but, as the result shows, it is feasible! 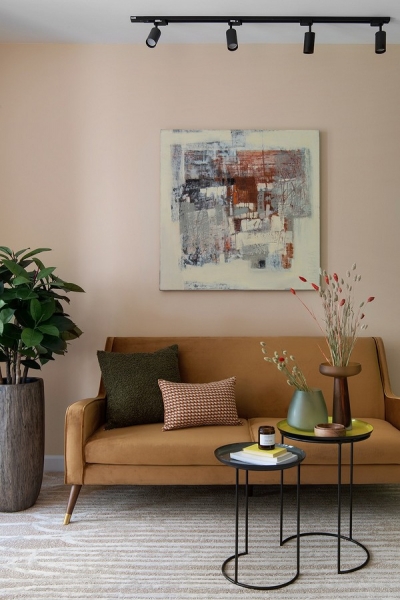 The original layout of the studio was a standard elongated room-kitchen, separate bathroom, small balcony. The window is only on one side. 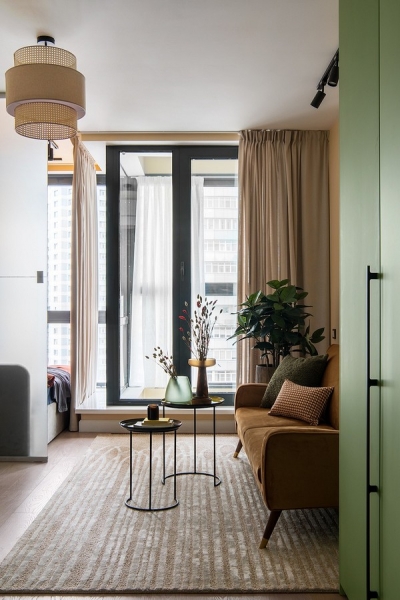 The designer proposed to build the following zoning. A mini-bedroom was located near the window, in fact, it is represented only by a bed. The bed is separated from the kitchen by a frosted glass partition privately enough so that the courier who came into the hallway could not see the person lying on the bed, but at the same time natural light penetrates through the partition into the kitchen area. 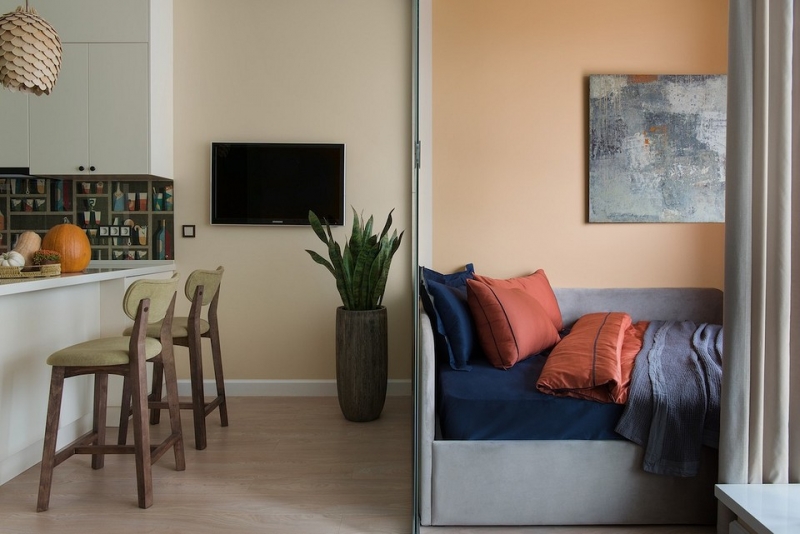 A partition was also built in order to separate the hallway. And although the hallway is connected to the room by an empty doorway, it still turned out to be isolated, for many it is important to separate such a “dirty” area from the living room. A sofa and a couple of coffee tables are located on the opposite wall from the kitchen and bedroom, and opposite the TV. 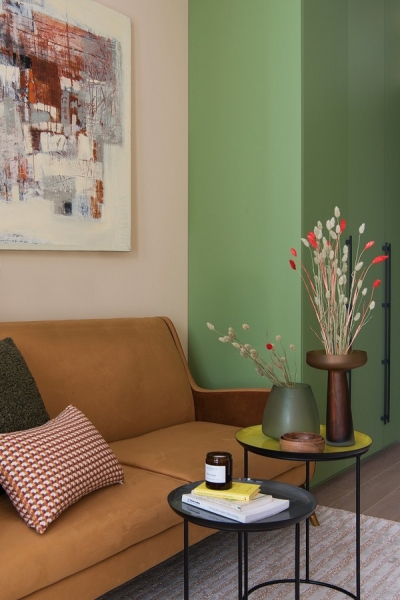 Inexpensive, but proven brands were selected for finishing. For example, for the walls the paint of the Finnish manufacturer Tikkurila, for the hallway floor tiles of the Russian production Italon, for the bathroom floor tiles Kerama Marazzi, this is also a domestic manufacturer. For the walls in the bathroom, they have already chosen Spanish tiles, a traditional boar of two shades. The floor in the living room and kitchen is laid with laminate of German production, bought in Leroy Merlin. 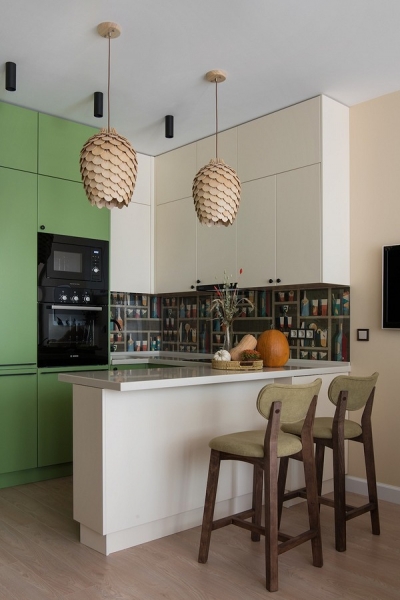 For the kitchen apron, wallpaper of the premium English brand Cole & Son was used and covered with transparent glass. But the wallpaper went to the owners from … the designer, or rather from Anna’s previous customers. It turned out to be very budget-friendly, but these wallpapers create an accent and mood. 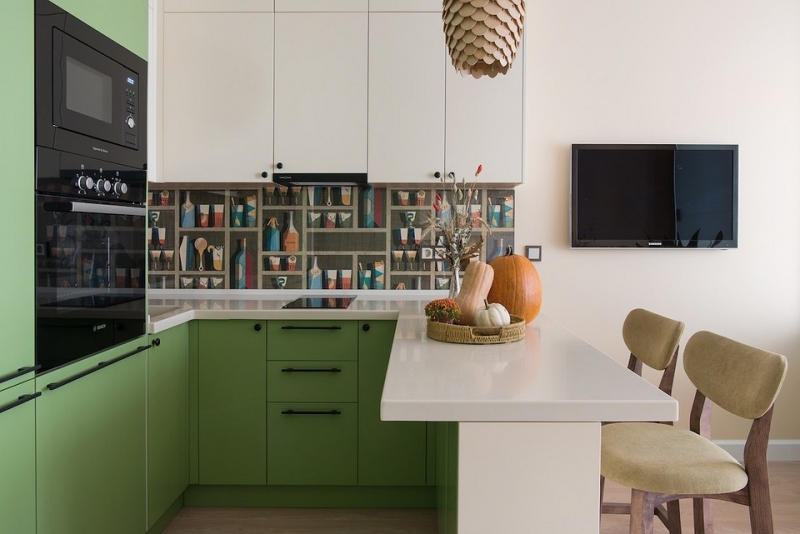 There are not many storage systems here, but it is quite enough for such a small area and the purpose of using an apartment for rent.

The kitchen set, as requested by the customers, is full-size U-shaped, with a bar counter. Household appliances are built into the columns, and additional storage shelves are located under the bar counter. And this is in addition to the standard lower and upper headset modules (the latter are made to the ceiling). 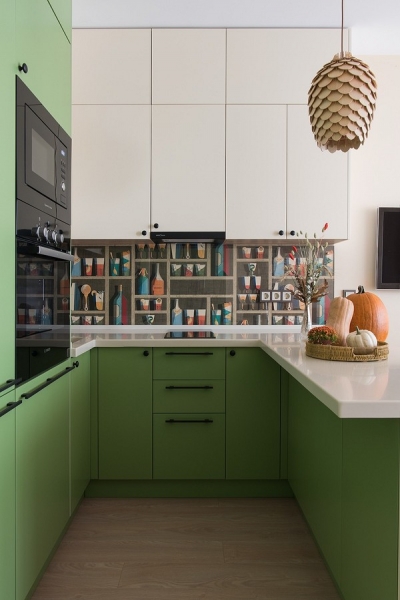 In the hallway there is a closet with a built-in banquette. Opposite the kitchen is a wardrobe. All cabinet furniture was made according to an individual project. In the bathroom, furniture was also made to order, a cabinet under the sink with a place for a washing machine, as well as a cabinet above the toilet installation.

The lighting in the room is zonal. In the center there is a chandelier with a wicker lampshade, track lamps above the sofa, overhead spots above the kitchen, and above the bar a pair of pendant lamps with plafonds that echo the style of the chandelier. Track lights were also placed above the bed. There are the same spots on the ceiling in the hallway and bathroom as in the kitchen area, and an additional lighting scenario in the bathroom was a suspension at the mirror with a sink.

Anna Gromova did not follow the usual path of “white for small apartments” and chose a color. However, her customers didn’t mind at all. According to the author of the project, she proposed two color solutions: with blue and green shades. You can guess that the customers chose the second one, they gravitated to the interior with eco-locomotives. 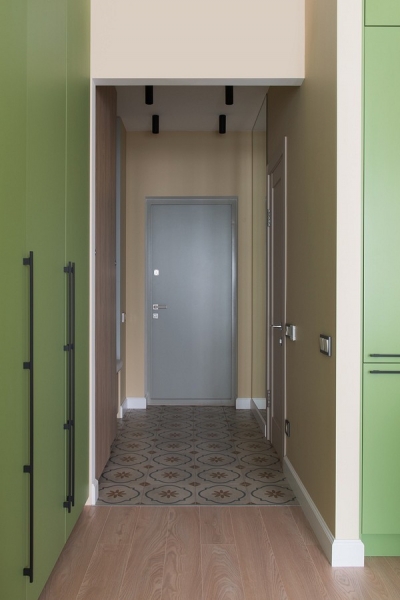 As a companion to the fresh green shade, a delicate peach-beige color of the walls was selected, which becomes more saturated and goes into orange in the bedroom area, not only the wall above the bed, but also the ceiling is painted in this shade.

The decor was selected according to an eco-friendly concept: dried flowers in vases on the coffee table, green plants and natural fabrics. For example, there are linen curtains on the windows. The author of the project calls flax “the most win-win material.”

I really like that even a budget project with materials from Leroy can turn out to be interesting and unusual. The most expensive thing is the wallpaper Cole&Son Cocktails series, worth more than 25 thousand rubles per roll. The story of their getting into this project is very interesting. Before starting work, I finished the project of a country house. As often happens, after the repair is completed, unused, superfluous materials remain. That’s what happened this time — after the delivery of the object, half of the roll of wallpaper remained, they could not be more appropriate for the apron in the kitchen of my new object. I just offered the customers to sell half of the roll. The deal took place, and its value is a bottle of champagne. 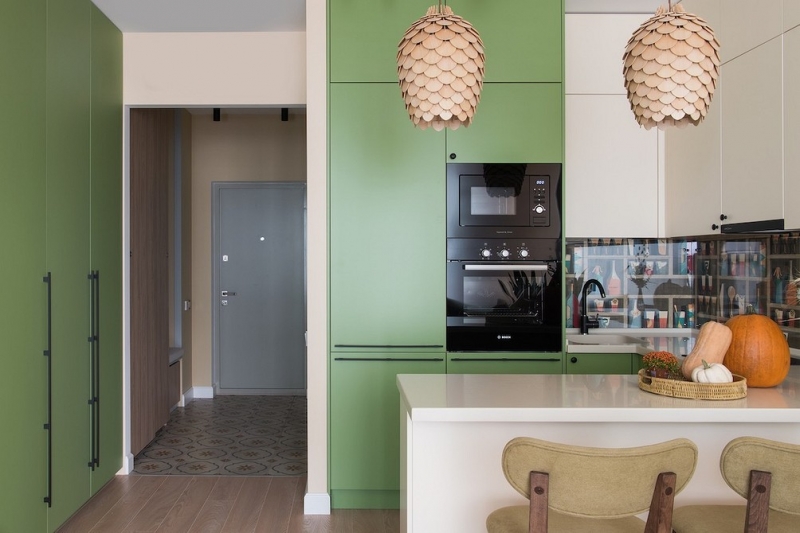 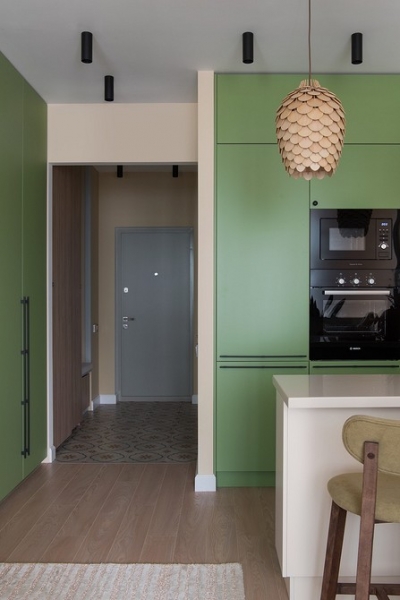 Kitchen, view of the hallway 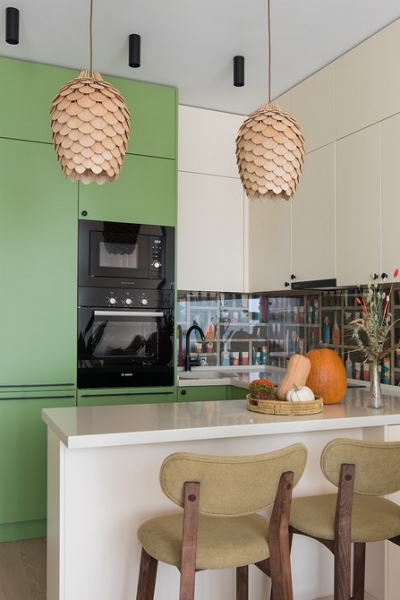 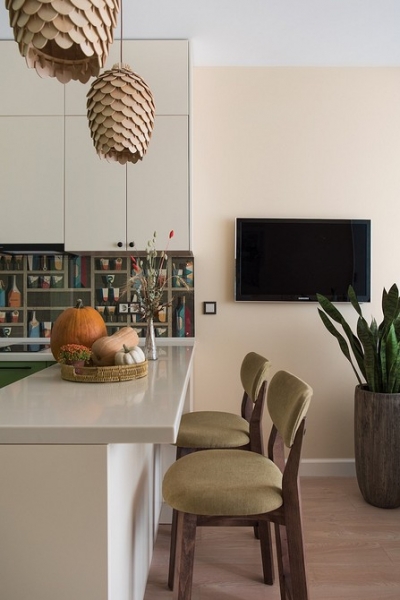 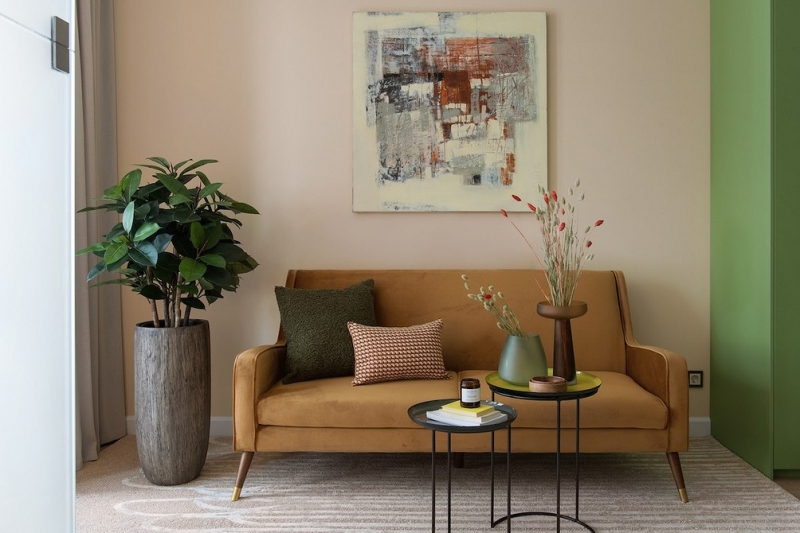 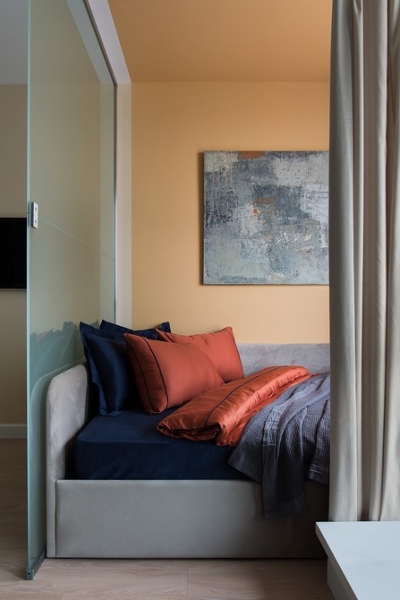 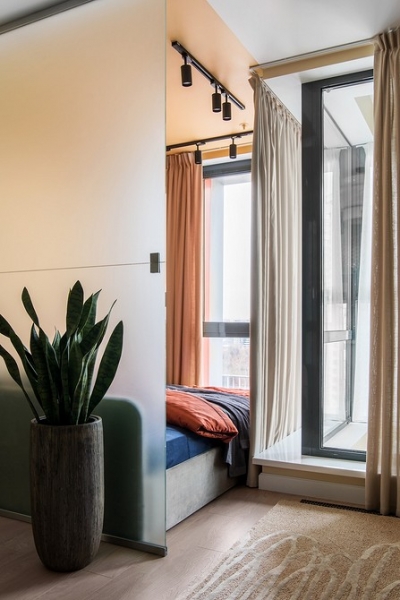 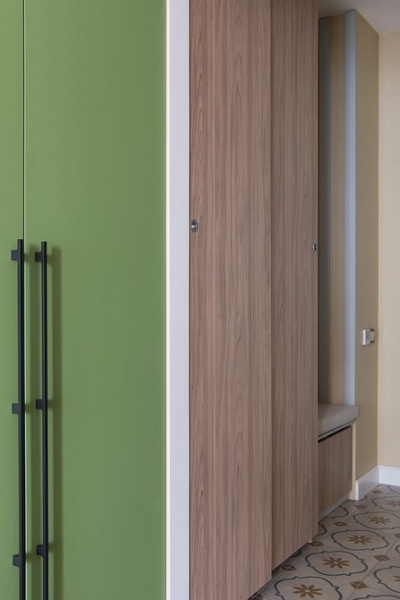 Closets in the room and hallway 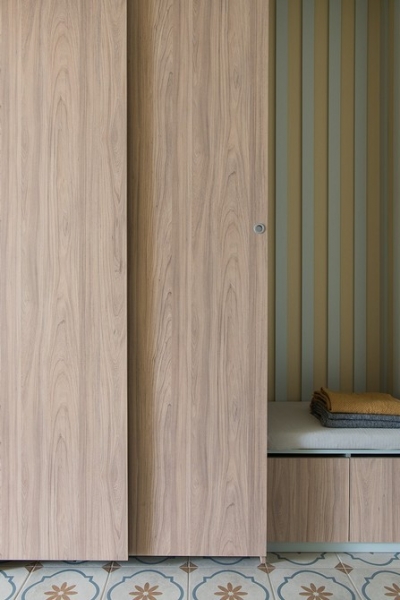 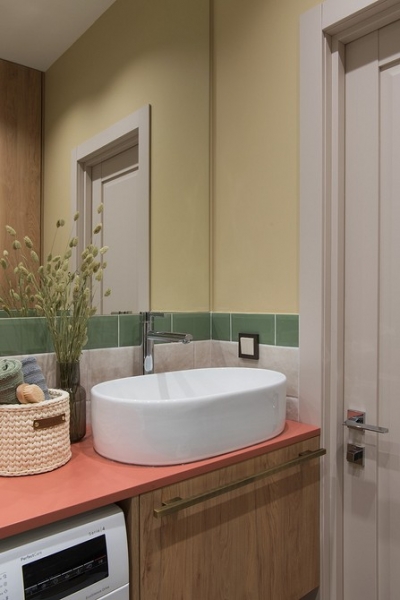 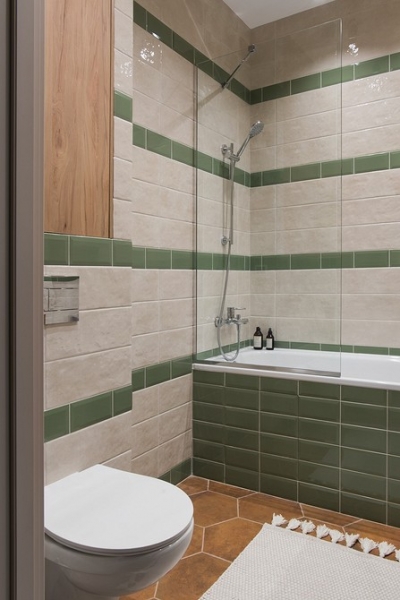 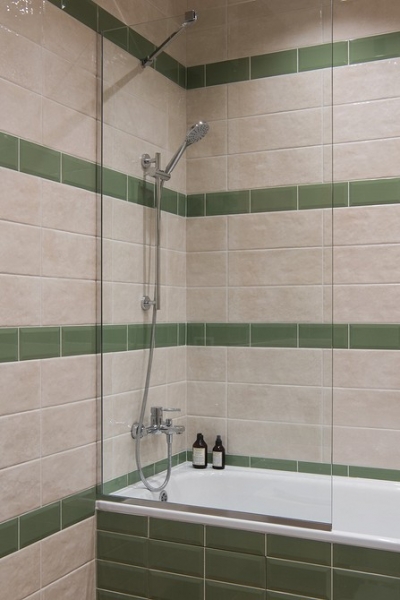 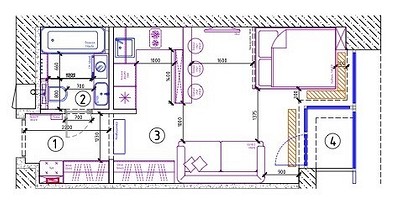