An old mansion in the center of London has been in disrepair for several decades. The architectural firm Charter Projects gave him a second life — and did it in English delicately 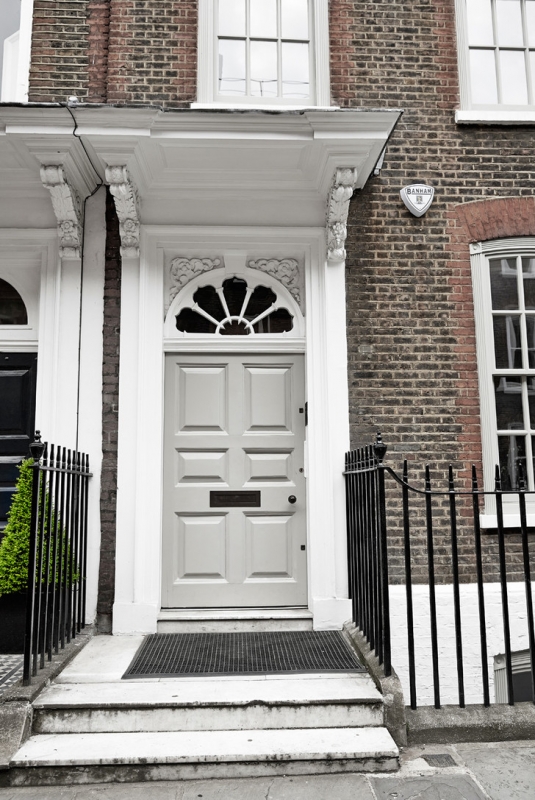 The facade of red brick with decorative elements of white stone is typical of the Georgian style that prevailed in the English architecture of the XVIII century.

The Bloomsbury quarter has long been reputed to be the center of London’s intellectual life. The elegant Georgian mansions of the area once housed publishing houses that printed Oscar Wilde, Virginia Woolf and Arthur Conan Doyle. Writers often came here and liked to settle their heroes here. So, Sherlock Holmes, before his move to Baker Street, lived on one of the streets of Bloomsbury, Charles Kitterbell from Dickens’ “Sketches of Boz” also lived nearby. Our hero was also here — a townhouse built in 1722. In England, such houses are called “terraced” – they began to be built in the XVII century, after the Great Fire in London. 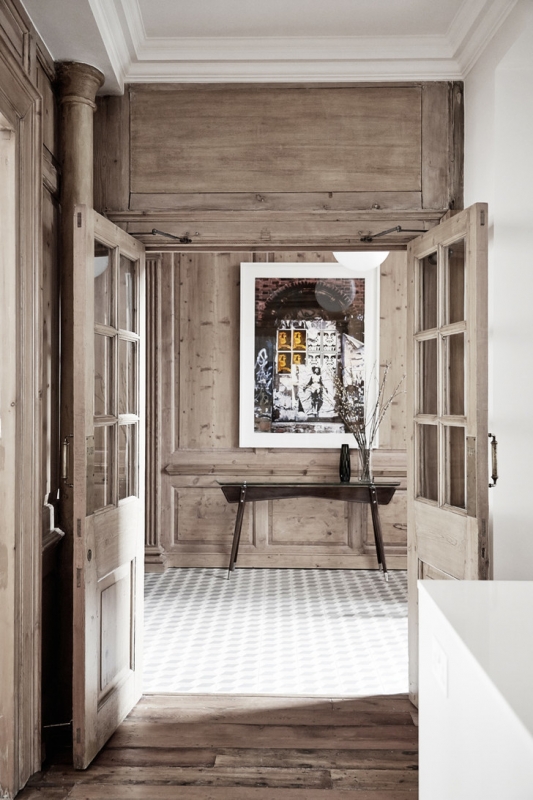 Once spacious rooms were cut into cramped offices with tiny meeting rooms.

The “terraces” are a long row of houses, each of which has two walls in common with the neighboring ones. Contrary to popular belief that such housing was intended for the poor, in London it was originally homes for the rich. And only much later similar buildings appeared in the working quarters, where ordinary people began to settle. This townhouse has been occupied by a lawyer’s office for many years. After its closure, no one lived in the house, and it fell into disrepair. The walls were covered with cracks, the doors cracked and skewed. The interior layout has also undergone changes. Once spacious rooms were cut into cramped offices with tiny meeting rooms and kitchens for staff.

Canteen. The table, Benchmark, is made to order. DSR chairs, designed by Charles and Ray Eames, Vitra. Papa Bear armchair, designed by Hans Wegner. The chandelier of the Sputnik model popular in the 1960s, named after the Soviet aircraft. A table on wheels by Conran, Marks & Spencer. In the corner there are two vintage chairs from Italy. 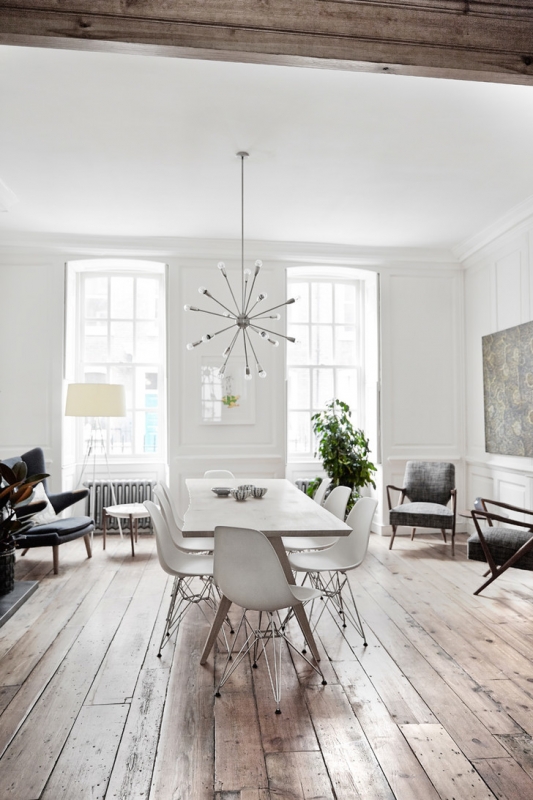 Kitchen. The modern facades of the kitchen, Bulthaup, fit perfectly into the historical interior. The architects managed to integrate a variety of kitchen appliances into it, including a built-in steamer.

“Everything was in a monstrous state,” the architects from the Charter Projects bureau recall their first impression. For many years they have been restoring old London buildings, adapting them to modern standards of comfort. When they started working on the house in Bloomsbury, he gave them a surprise. Behind the ugly modern paneling, ancient fireplaces and unique carved wooden panels were revealed. The architects faced a difficult task — it was necessary to restore the historical appearance of the house as much as possible, and at the same time create a cozy atmosphere for a large family with three children. 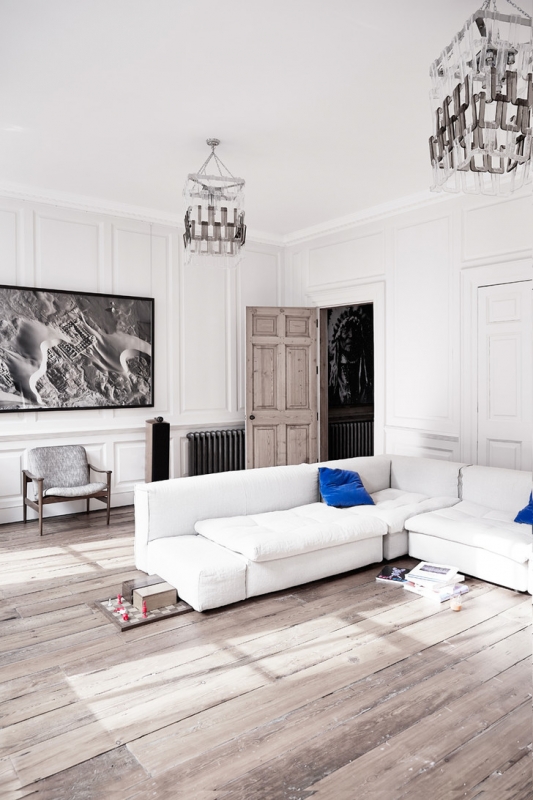 Living room. On the ceiling there are vintage chandeliers of the 70s of the XX century. White folding sofa Nap from Arflex.

The complexity of the project was not only in the solid age and size of the building (five floors), but also in its status: the house is considered an architectural monument and is under the protection of the local English Heritage Council. To begin with, the wooden wall panels were restored to their natural warm color by polishing them using a special technology. The walls were painted in noble shades of gray. This gave the rooms a more modern look and visually made them lighter. The rooms were furnished with mid-20th century furniture found at auctions and flea markets. 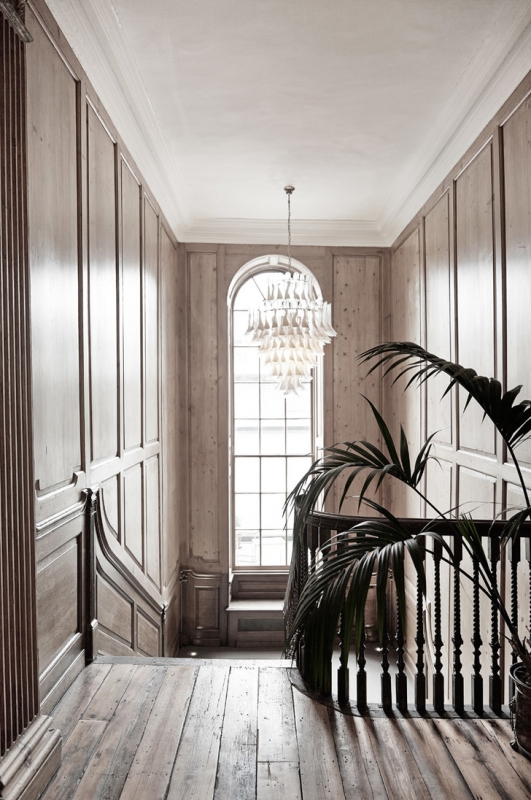 A flight of stairs. On the ceiling is a vintage Murano glass chandelier, Italy, 1970s. 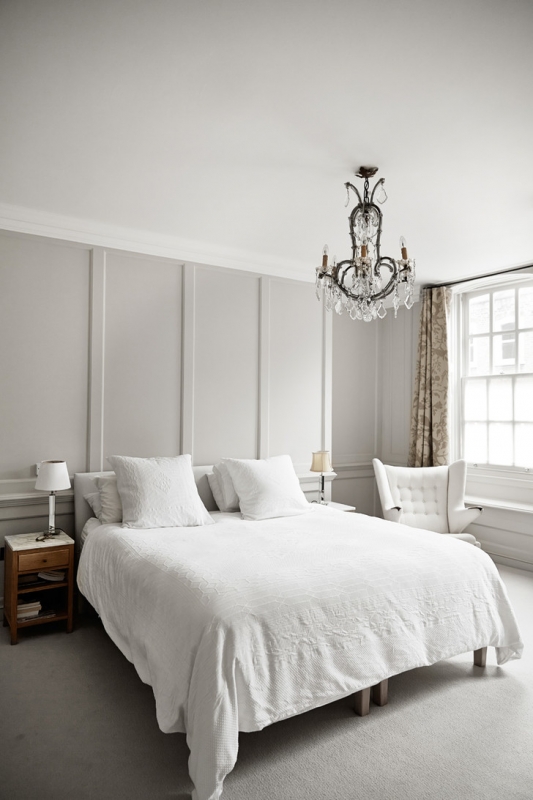 Traditionally, the floors in Georgian-style houses were plank, but the architects chose a tile with a geometric pattern for the hall. Having received permission for redevelopment, the architects demolished the partition between the living room and the kitchen. This made it possible to create a modern open-plan space. Now the house has two living rooms, five bedrooms, two workrooms, a wine cellar. In the basement of the house there is a separate guest apartment with two bedrooms. All technical and electronic equipment, including the ultramodern Bulthaup kitchen, was carefully built into the interior by specialists from Charter Projects, without violating the architectural and historical integrity of the space. Another “gift” was the flat roof of the mansion.

It’s hard to believe that a 15-minute walk from the house there is a noisy and lively Soho.” 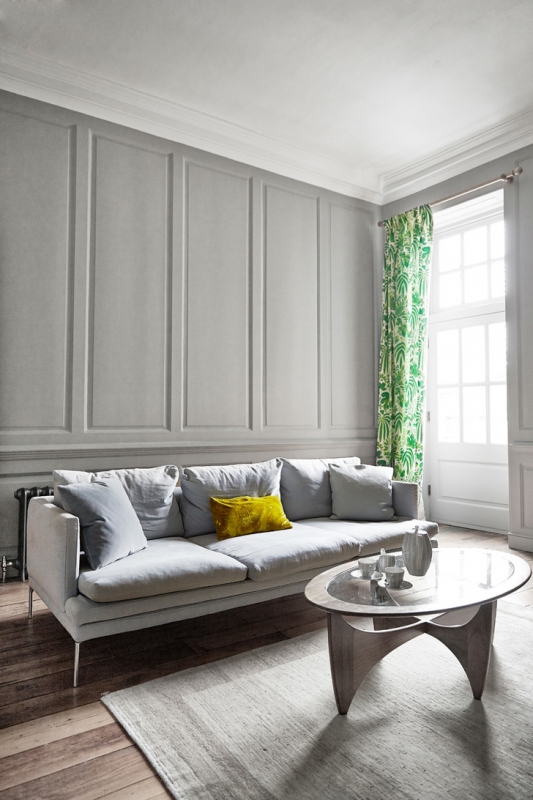 In London, it is considered a great success to buy a house with such a roof, especially in Bloomsbury, where there are very few such buildings. This made it possible to equip a winter garden, through the glass walls of which you can admire the city at any time of the year. “The house itself is located in a very quiet place,” Elizabeth rejoices. — There are green squares and a children’s park Coram Fields. It is simply impossible to believe that the lively and noisy Soho is just a 15-minute walk away!”

Bathroom. The marble sink is made to order. The color of the Bleu de Savoie marble harmonizes well with the gray slate tiles on the floor. Bath, Royce Morgan, faucets, Hansgrohe.