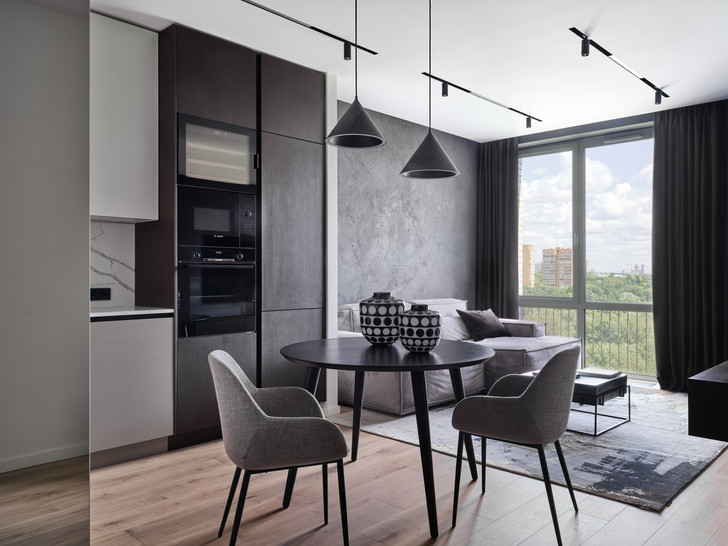 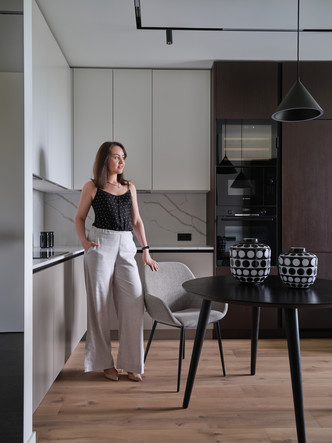 The customer, a thirty-year-old bachelor, creates video games, works at home, so he needed a neutral, monochrome interior, without bright and distracting accents. In other words, one in which it would be equally good to work and relax.

Lina Knyazeva’s studio has done everything possible to create a comfortable environment in a small apartment. The apartment was divided into six functional zones: an entrance hall, a kitchen-living room, a bedroom, a dressing room, a bathroom and a laundry room. The same finishing materials were used in all rooms (this helps to make the space homogeneous and visually whole), and diversity was introduced with the help of designer light. 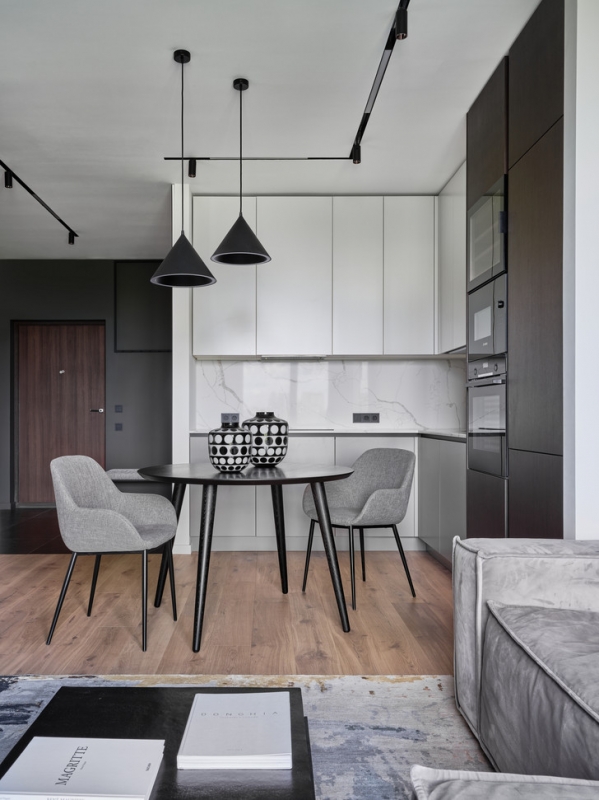 Kitchen-living room, fragment. The kitchen is made to order according to the sketches of the author of the project. Dining table, SKDesign. Chairs, Barcelona Design.

Since there is no color in the apartment, the designers decided to play with textures. “After communicating with the client, it became clear that he likes the effect of rough-rough plaster on the wall,” says Lina Knyazeva. — We used two slightly different textures in the living room behind the sofa and in the bedroom behind the bed. The walls were unobtrusively illuminated to emphasize the relief.” 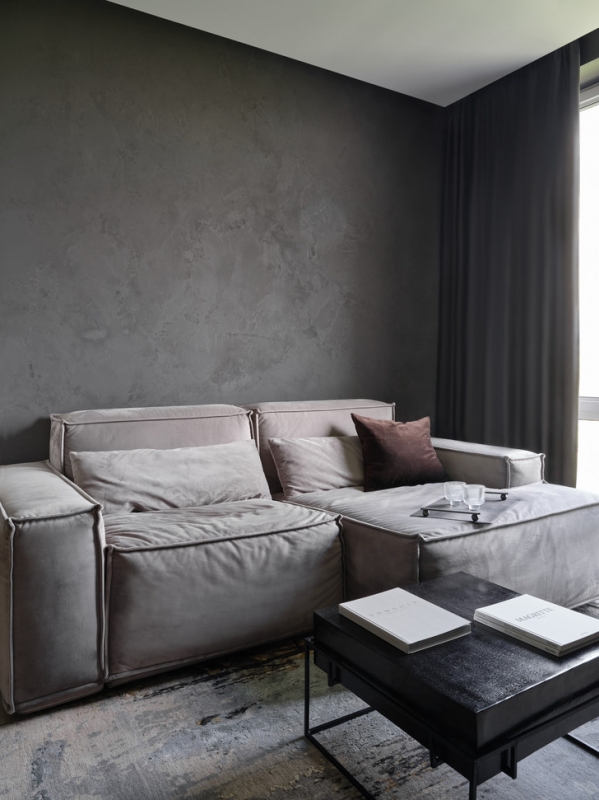 “I like to see how the laconic interior is magically transformed with the help of decor,” says Lina. The pattern on the carpet, as well as its soft texture, give a certain character to the whole room. A soft carpet combined with an angular rectangular coffee table is one of my favorite elements in this interior.” 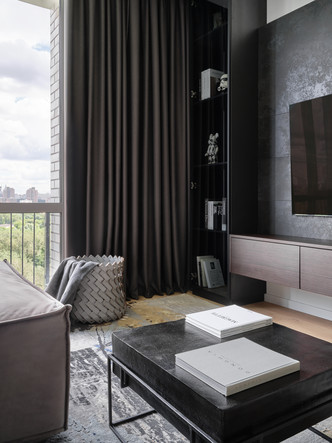 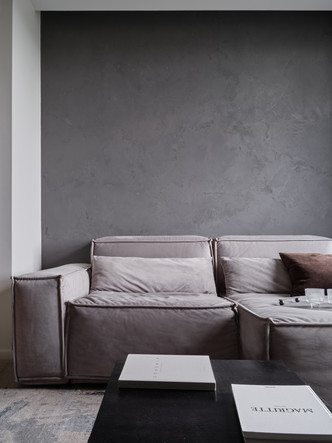 The wall with the TV was highlighted with the help of large-format porcelain stoneware, the pattern of which resembles the texture of dark plaster. Part of the wall was pushed forward to hide the bracket. According to Lina’s observations, the TV panel looks bigger against the background of a dark wall. 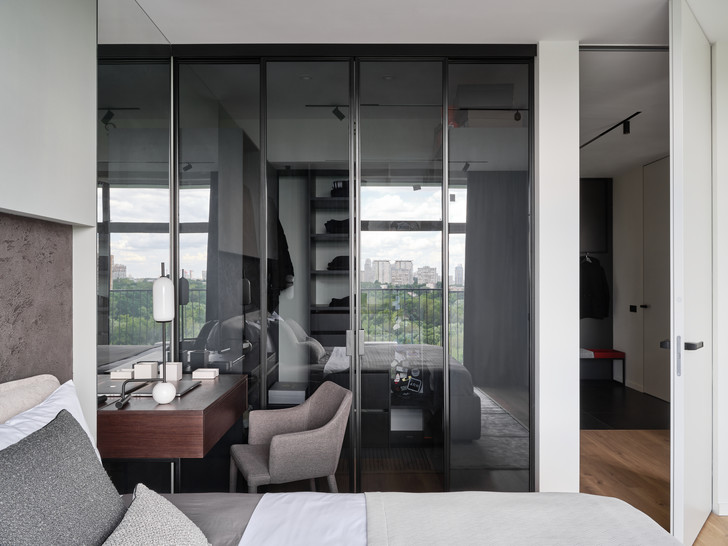 In the bedroom, two functional areas were separated by a black glass partition. “At the same time, we used the maximum area for storing the client’s belongings,” Lina emphasizes, “with a margin for years to come.” Sliding doors save space in a compact bedroom, glass makes it deeper. 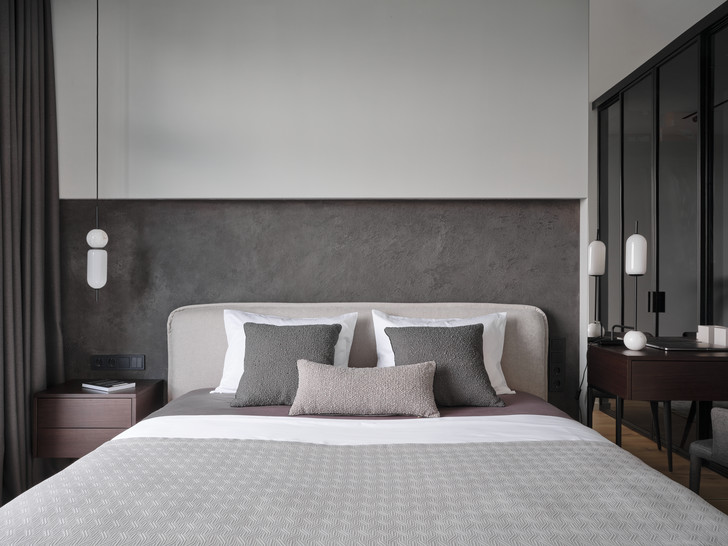 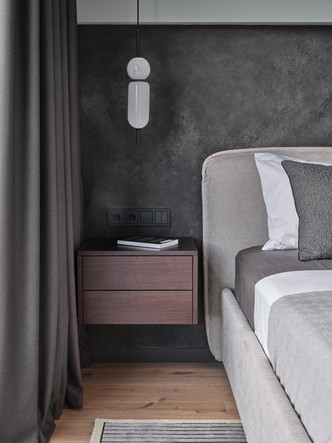 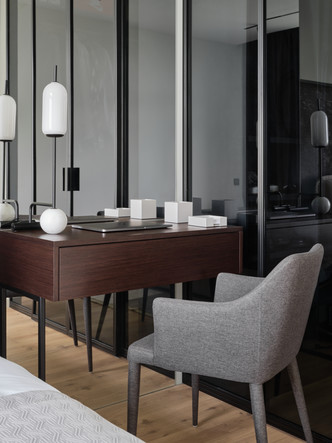 Bedroom, fragment. A small table can serve as a work and toilet table.

In the hallway hung a large mirror in the full height of the wall with lighting, which is perfectly combined with high doors. It was important for the client to have doors up to the ceiling, as he had long liked this design. 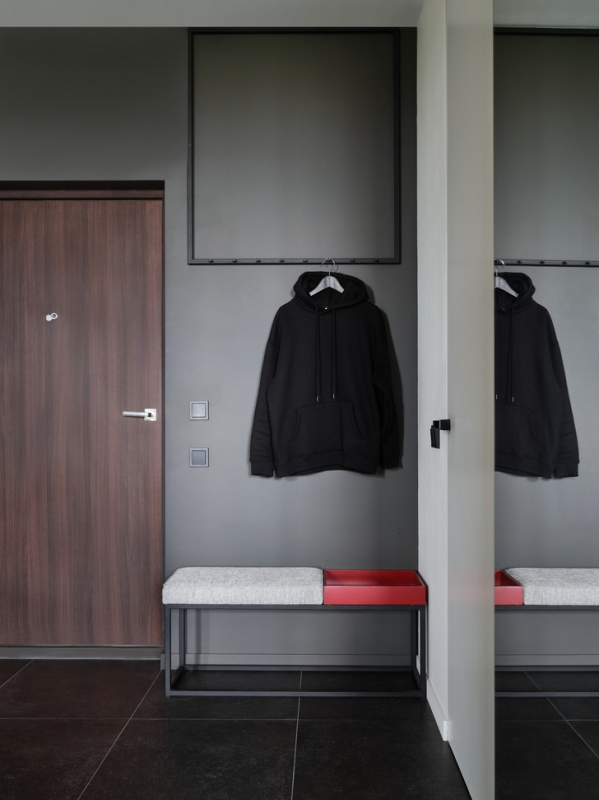 In the bathroom, Lina made a niche with lighting to make the room look bigger and roomier than it really is. An oval mirror softens the strict rectangular shape of the cabinet under the sink and gives comfort to the whole room.

All these details were created with the active participation of the client, and in most cases — according to his wishes. “I am proud that I managed to make the apartment comfortable in small things and at the same time preserve the integrity of the design, the concept that was developed at the very beginning,” says the designer. 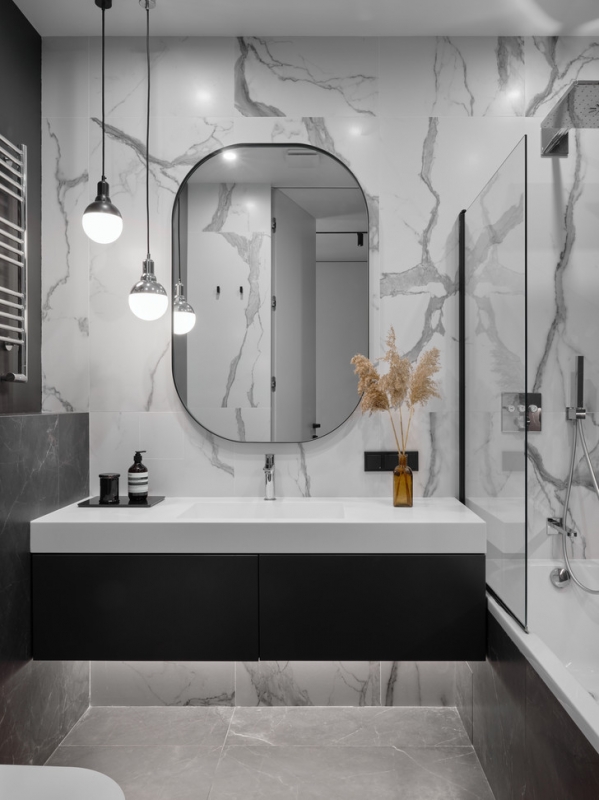 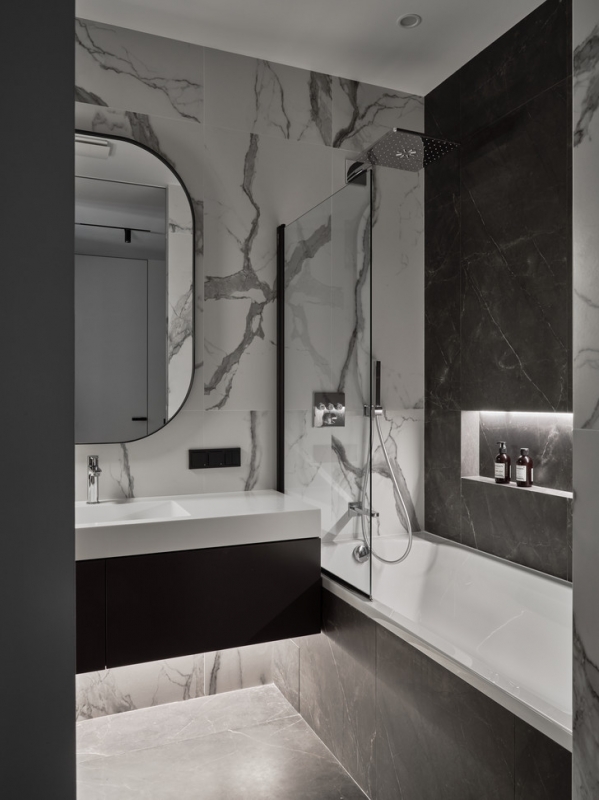 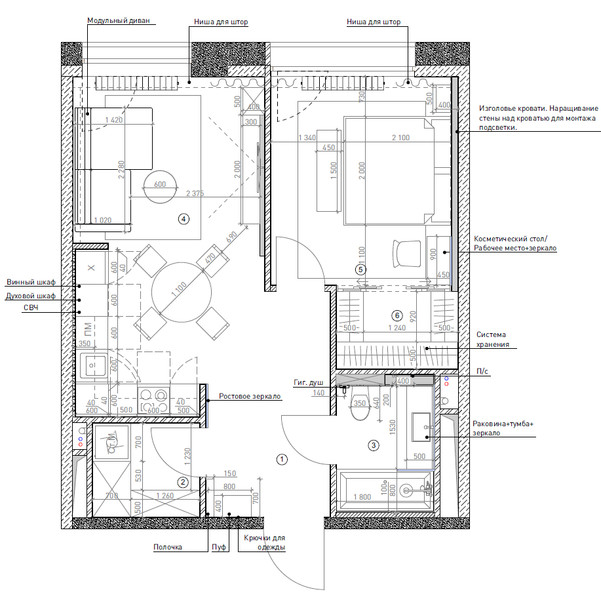 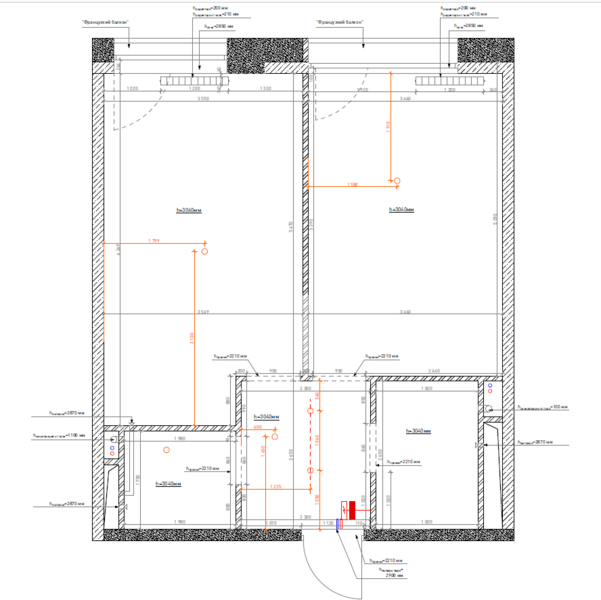 Apartment of 58 sq. meters in a new house in Moscow. The project of Lina Knyazeva. 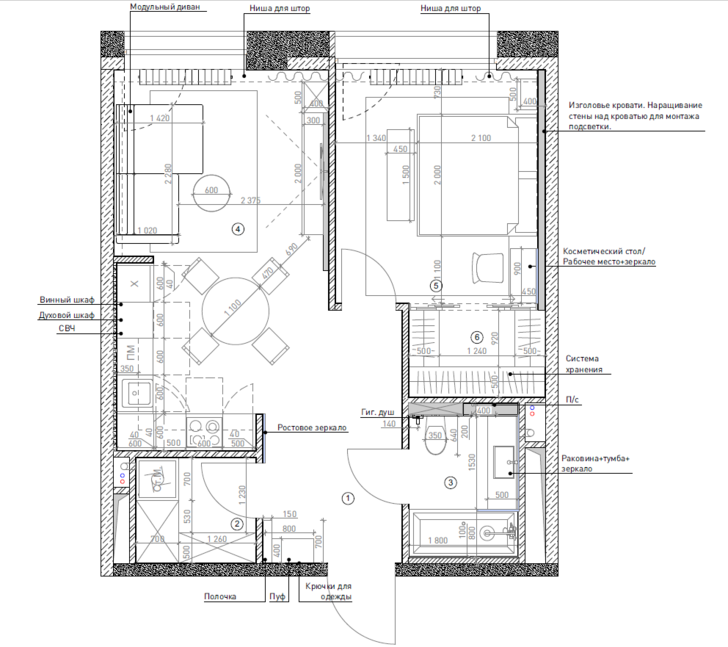