What we have, we don’t keep. But French designer Greg Lesterlen, who has been living in Russia for 10 years, fell in love with Soviet architecture and design and finds inspiration in the historical past of our country 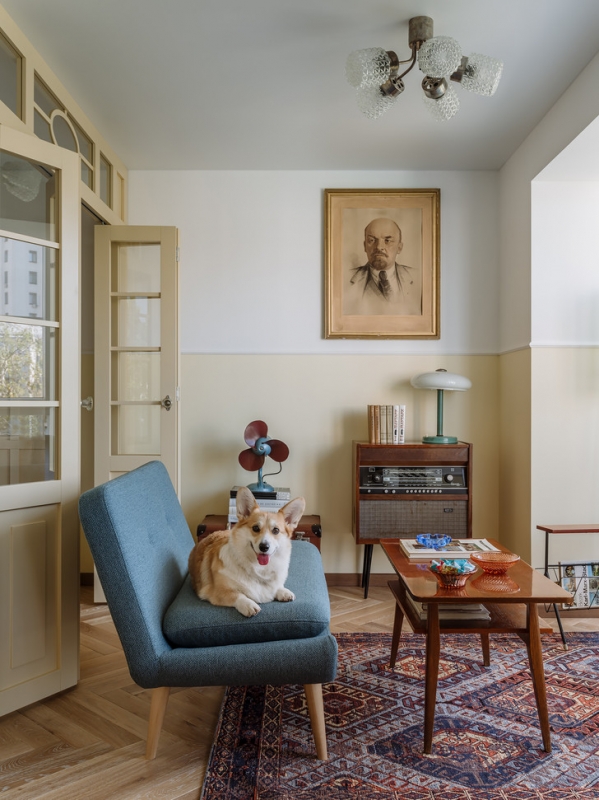 There are a lot of old vintage items in the interior and each has its own story. Of those that can be seen in the living room, Greg identifies two: a radio and a portrait of Lenin found in a stack of posters in the Chronosfactor store.

GENERAL PARAMETERSProperty type: apartment in a block house in 1965

The main idea of the project: a new reading of the Soviet style

“A resident of the UK of Russian origin approached me with a request to make repairs in a studio apartment. This house was bought as a long-term investment for rent. The main task was to turn it into a noticeable object in the real estate market and meet the deadlines. There were no strict budget restrictions, so we could, for example, make most of the furniture to order according to my sketches,” says the author of the project. 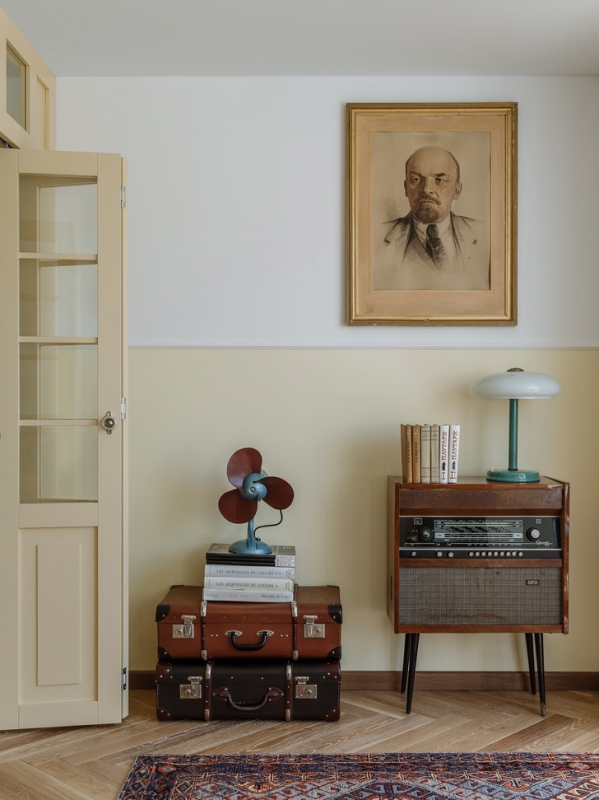 The radio, which stands in the living room, can be quite considered a modern player, because it is not just restored and in working condition, but also improved and now makes it possible to listen to music from a smartphone via Bluetooth.

“I decided on the style as soon as I saw the object — Soviet minimalism. A quiet green courtyard, a block house built in 1965, a fascinating view of the “high—rise” on the Kotelnicheskaya embankment – there could be no other style here. For many, the Soviet style is an elegant Stalinist Empire style, but it was the minimalism of the 1960s that replaced it, laconic furniture of small sizes took place in the rooms — to fit into such small-sized apartments like this.” 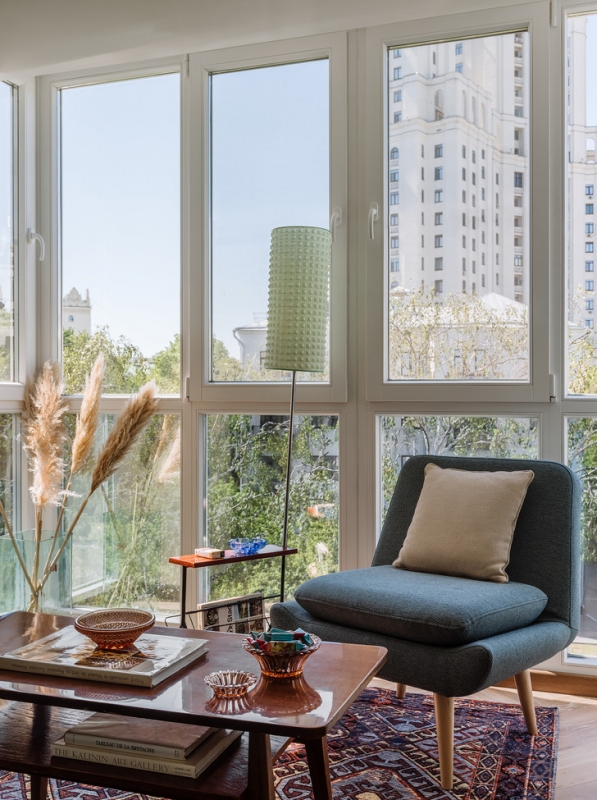 “The first thing we decided to do was to demolish part of the partitions and at the same time divide the apartment into clear zones: kitchen, dining room, hallway, a place to sleep, a public area, take out all the storage systems in a separate dressing room and refit the bathroom. We combined the kitchen with the bathroom, organizing a small dining room and a full-fledged living room. The balcony was attached to the common area, which made it possible to expand the living room and make the apartment brighter.” 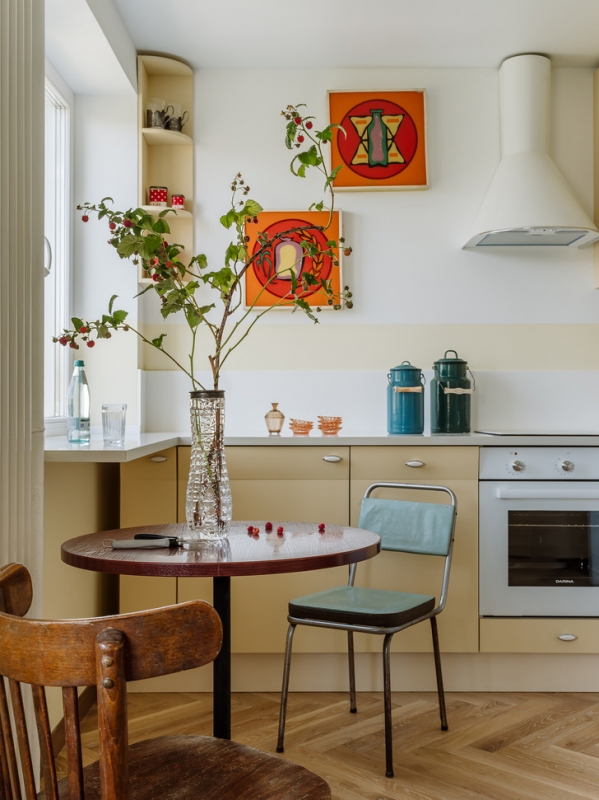 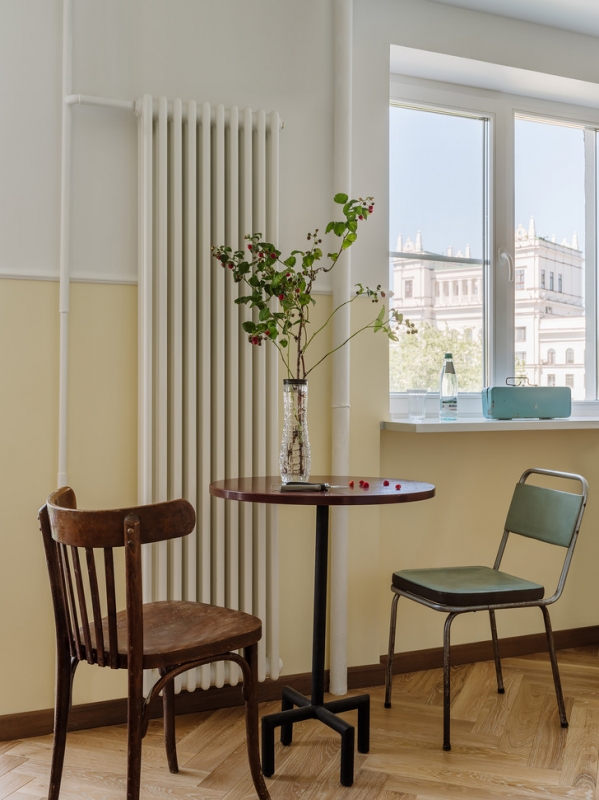 “In order not to distract attention from the view from the window, I picked up a dim color scheme. Beige was not chosen by chance, it was in this color that the walls of apartments and traditional kitchen sets of the USSR times were often painted. The complementary color was blue. The combination of these two colors created, in my opinion, a harmonious color composition, visually expanding the interiors.

We painted the old ZIL refrigerator in pastel blue, which became the main decoration of the kitchen. This refrigerator has been on my list of favorites for a long time, and finally I had the opportunity to use it at one of the facilities.” 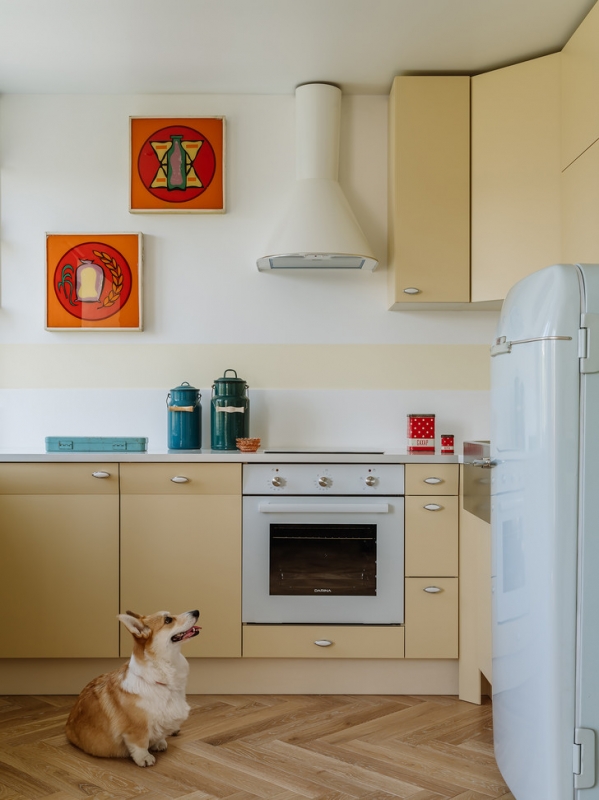 “Probably, it may seem strange to someone that there is a dog in the interior photo, but when I was working on the project, a corgi puppy named Arlette just appeared in our family,” Greg explains. — We ourselves live nearby and, while the dog could not be left alone at home for a long time, I often took her to work. So Arlette may well be listed as a co-author of this project.”

“I believe that the design and quality of Soviet technology deserves a separate conversation. The famous ZIL refrigerators, supplied to more than 50 countries of the world, surpass all records of endurance of household appliances.” 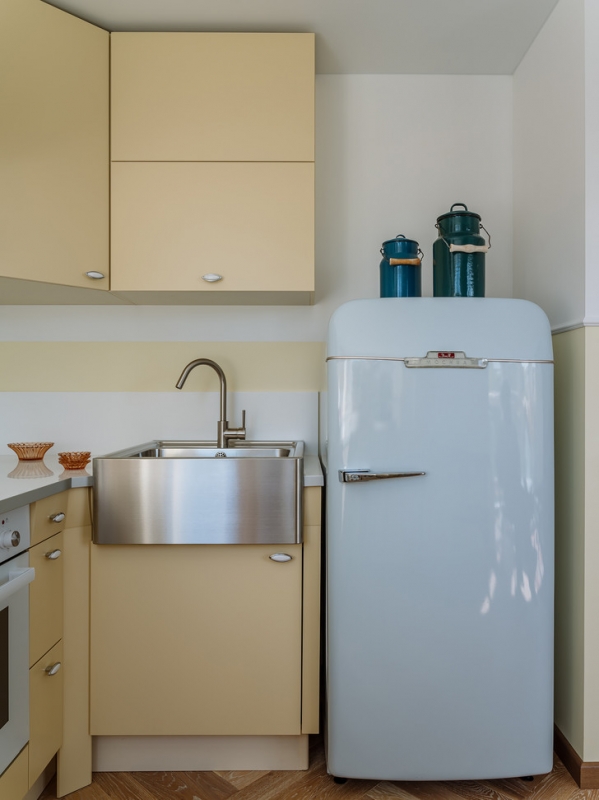 “I have always been surprised by the love of Scandinavian style in Russia, because it implies the value of the history of the house and apartment — therefore, in typical Scandinavian interiors you can often see worn parquet, antique stucco on the walls and dressers left over from grandmothers. Russia has its own “Scandinavian style” — Soviet minimalism with its characteristic purity and conciseness. We can be inspired by the works of designers and architects from other countries, but still we should not forget about our roots and culture, about what makes the interior truly original.” 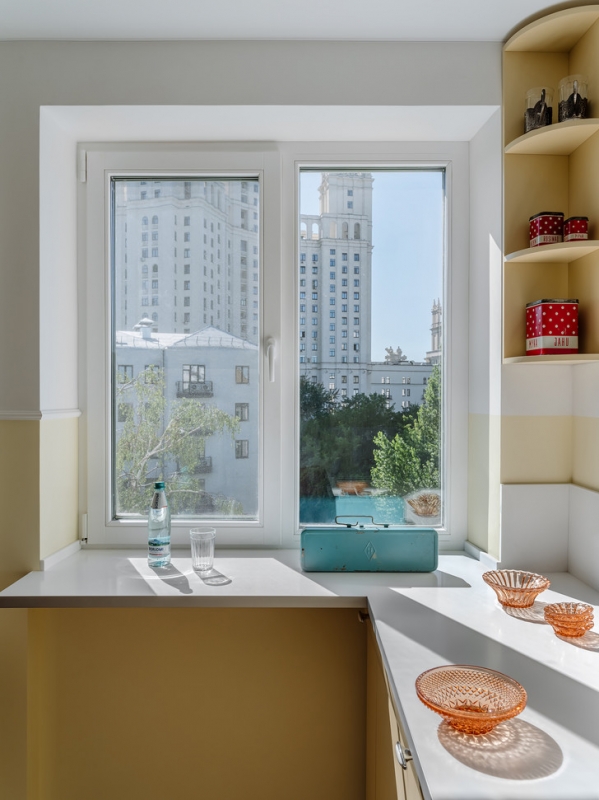 For a successful rental, it was necessary to organize a full-fledged sleep and rest area. Although the apartment is small, I managed to place a large bed in a specially equipped niche behind swing doors with glass inserts (thanks to them, daylight penetrates into this area). 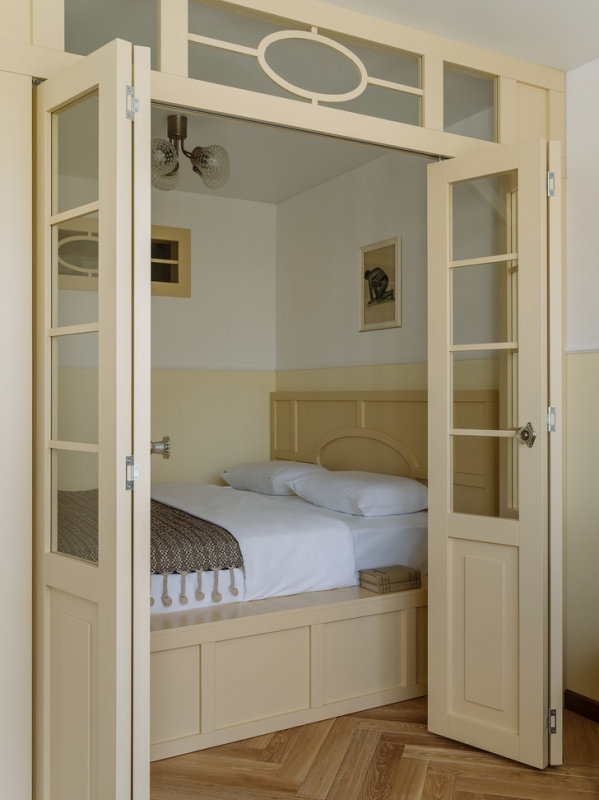 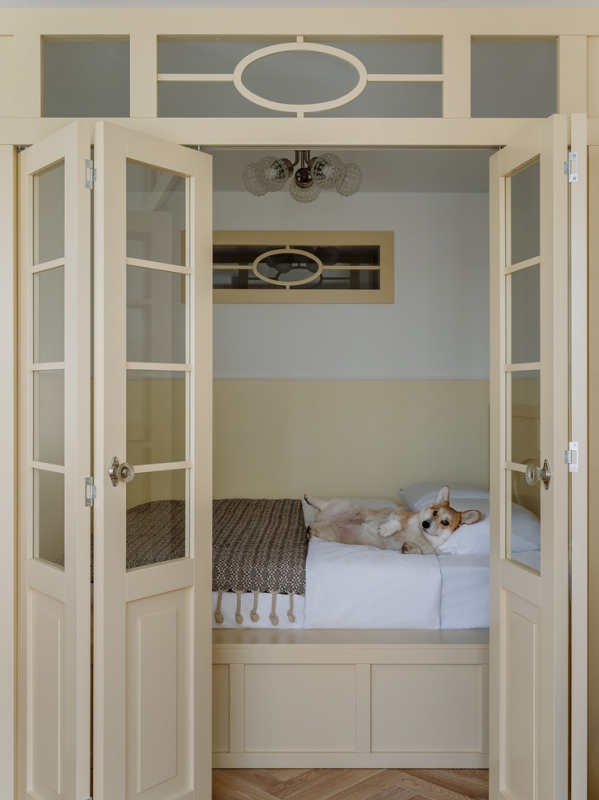 “I managed to make an interior in the Soviet style, without slipping into endless nostalgia, to create a concise, bright and functional housing. The apartment “left” in record time, and that was the main goal of the customer. And the stunning view from the window, which previously could only be admired from the balcony, has now become part of the common space.” 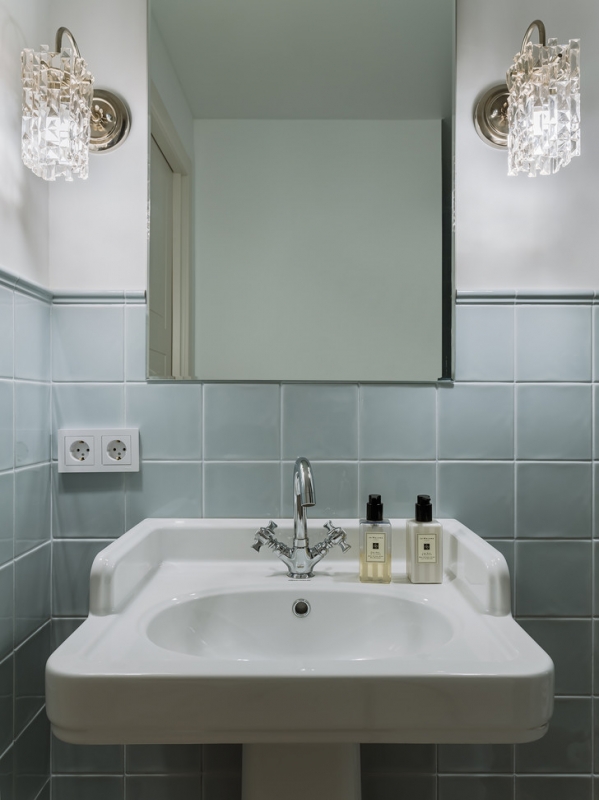 The bathroom and the bathroom were combined and abandoned the bath, leaving only the shower.