On the eve of the New Year, we have compiled for you a hit list of the most popular country houses published on the ELLE DECORATION website this year

If among other houses you see one completely black, then with a probability of 90% its owners will be modern architects. Like, for example, Ilya and Svetlana Khomyakov, the founders of the studio QuatroBase. And then the question to the experts: “What is hidden in the black box?” And here the answers are the most unexpected. Behind the black facade of the Khomyakov dacha, we found a bright pink kitchen, a palm tree under the ceiling, picture cabinets and pillows… with very expressive eyes. You can view the interior in detail by following the linkLiving-dining room. 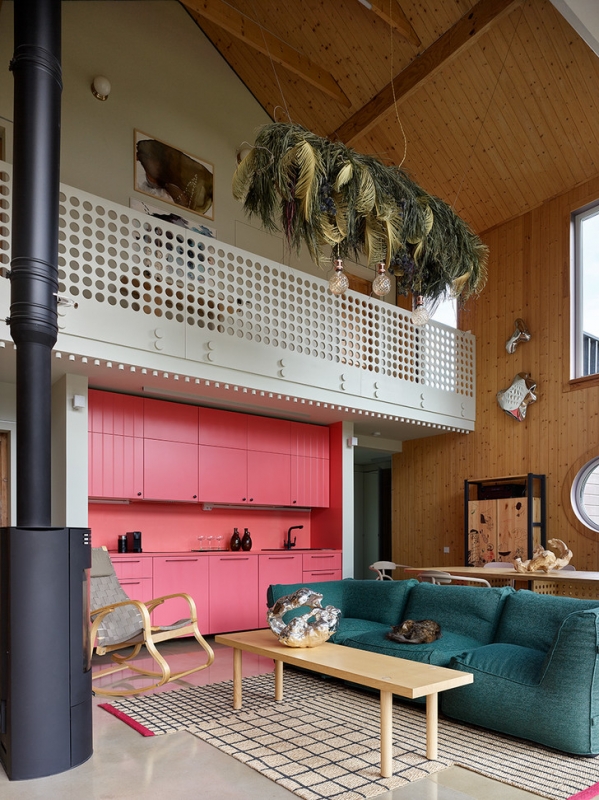 Decoration of hanging lamps in the form of a composition of stabilized flowers, floral studio “Kamysh”. Sofa “bag”, Kreslo workshop.

Bright minimalism: a townhouse in Belarus

This townhouse, located in a new residential complex near Minsk, belongs to a young creative couple. The customers took an active part in creating the interior and set the tone for the whole project with their energy. The designers of Svai Studio could only listen to the ideas of customers and look for ways to implement them. “We didn’t adhere to a certain style. Mixing styles, eras, elements and materials — this is the idea of the interior. It is alive and different, just like the people living in it,” says designer Vitaly Savko. Read about this project here.Chandelier, Flos. 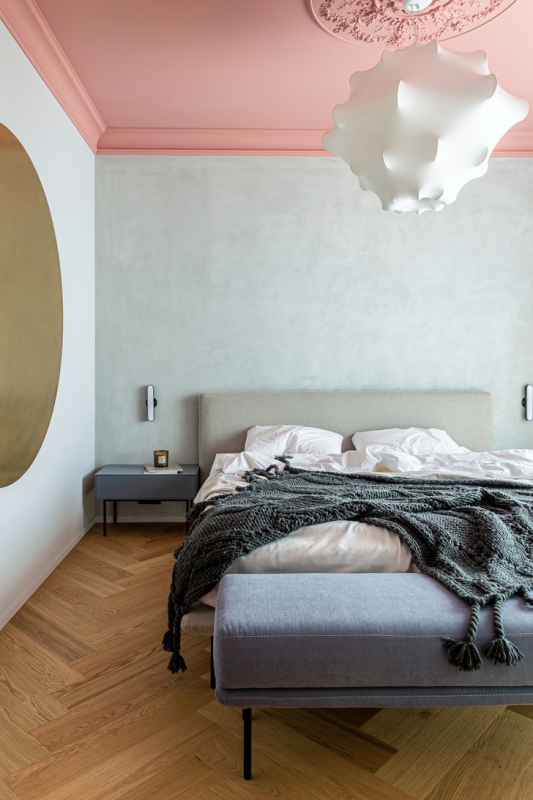 “Our customers are a wonderful family of the millionaire blogger Karina Paletsky,” says the author of the project Maria Rubleva, founder of the Rubleva Design studio. — In addition to Karina, her three daughters live in the house — incredibly artistic girls who turn it into a permanent place for creativity. We wanted to create a clean and light architectural interior, not overloaded with unnecessary details, which would be an excellent location for home filming. At the same time, so that customers can live comfortably in it.” To what extent the designer did it, see for yourself. 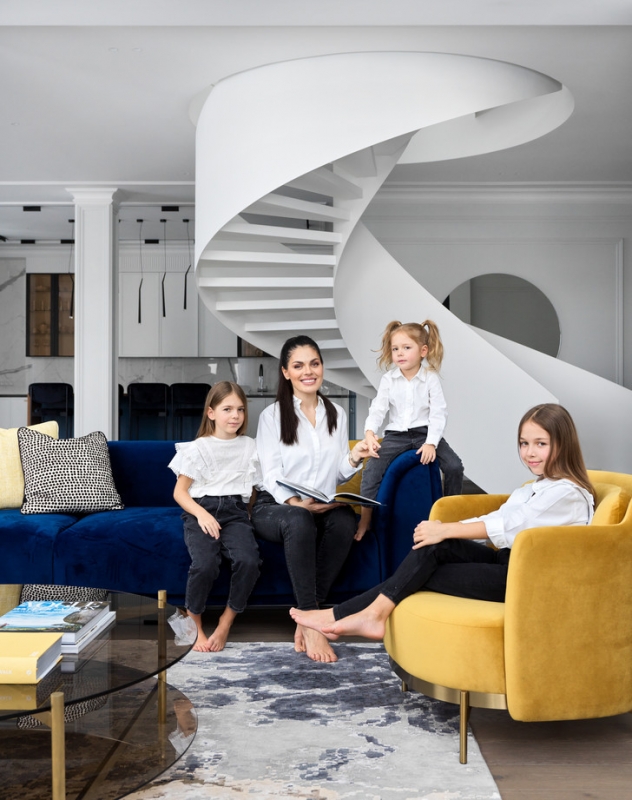 The family of blogger Karina Paletsky in the living room of her house in the Moscow region.

Designer Yulia Barshevskaya redid a ready-made new house for customers, which was already on the site, and told us in detail about how the work was going. “When I first came here, the house was in a deplorable state. It stood unclaimed for several years and needed not only interior decoration, but also repair of load—bearing structures, – says Yulia. But she was lucky: the customers knew what they wanted, and therefore they immediately found a common language with the designer and quickly decided on the layout and style. For more details, follow the link. 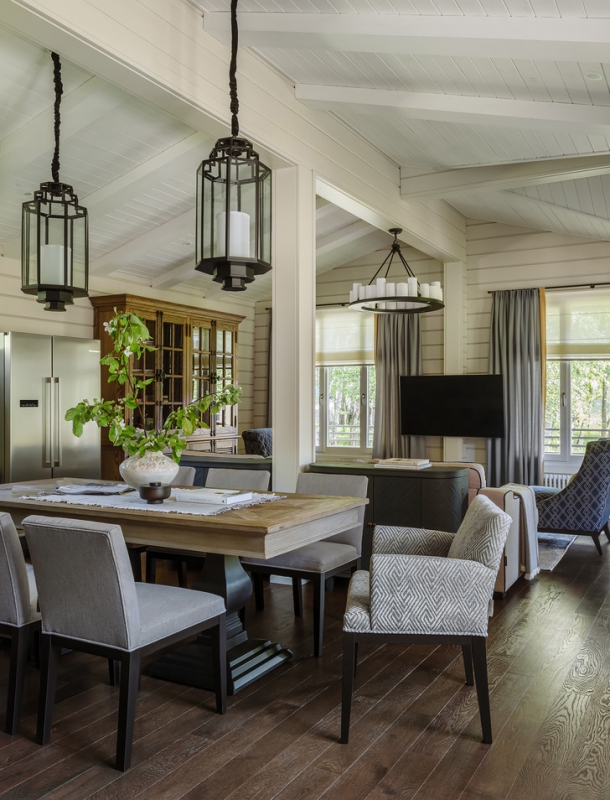 Kitchen-living room. The buffet from the array is made to order. Chandelier and suspensions above the Eichholtz table. Vase on the table, Forest is calling

Designer Anastasia Rykova turned the village bathhouse into a bright, modern Russian dacha for her family. “I bought a house in a quiet picturesque place on the banks of the Oka River,” says designer Anastasia Rykova. — Initially, it was going to make a bathhouse for the residents of the village, but the plans of the developer changed, and so we got it.” How the designer managed to cope with the difficult architecture of the house,see the link.Armchair, upholstered furniture, Gervasoni. 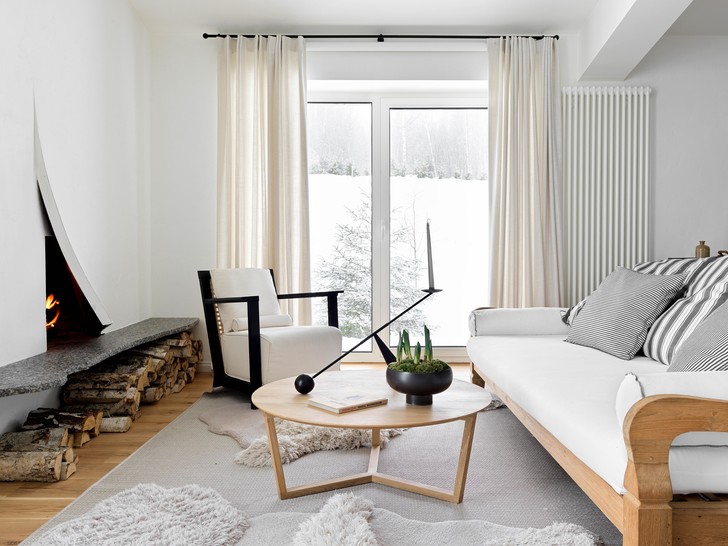 Microdome in the Moscow region: the dacha of architect Fyodor Dubinnikov

Fyodor Dubinnikov, co-founder of the Mel studio, built himself a dacha on the high bank of the Istra reservoir. This house seems to be open to the four cardinal directions, while its area is only 63 square meters! From the outside, the house resembles an architectural constructor, which can be played endlessly: if desired, the volumes can easily be “increased” with new blocks. “But I still have enough of everything,” says the architect. For more information, follow the link.For the lining of the underfloor heating, we chose tiles, Geotiles. 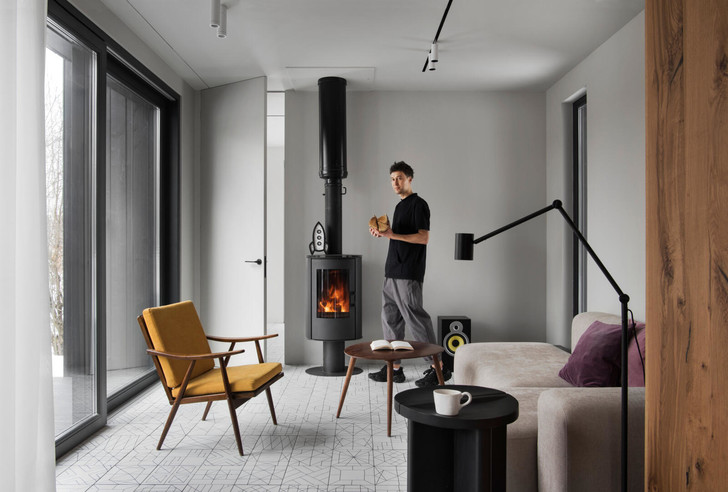 “There is a certain understatement in it, sketchiness — like in children’s coloring drawings, where only the outline is applied, and you can figure out the color yourself,” says the architect.

Architect Alina Kashirina designed this house for herself and her family. “I wanted to create a modern, but at the same time relaxed interior without pretentious luxury and rigor. It was supposed to be a dacha — a place where you can relax from the hustle and bustle of the city and enjoy nature. I also wanted the project to be sufficiently budgetary. We did not order furniture in Europe and mainly used what we had and were available in stores,” says Alina. Read about this project in our special material.Tables, La Redoute. 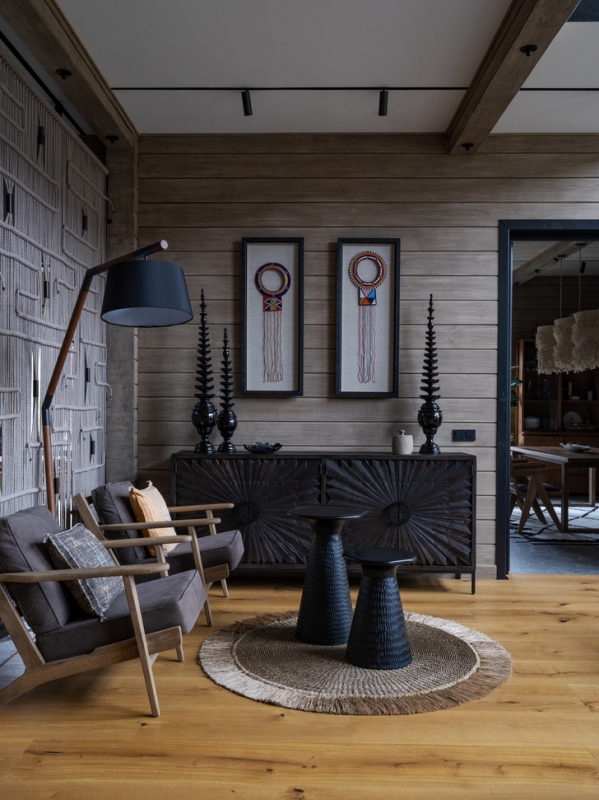 Pillows made of vintage silk were brought from Morocco. Chest of drawers, Dantone Home. The partition is made to order according to the architect’s sketch by a master from Voronezh, island_galina_sh. The decor on the chest of drawers was brought from Bali. On the wall — wedding necklaces of the Maasai tribe brought from Africa.

“This house was registered in the house register in 1879. Perhaps it was built even earlier, but it was not mentioned in the documents until the specified year,” says designer Anastasia Muravyeva. — The village of Krapivye itself has been known for 450 years. There are a lot of buildings with brick facades here, because there was a brick factory nearby, and there were a lot of bricklayers among the locals.” More information and photos are in our material. 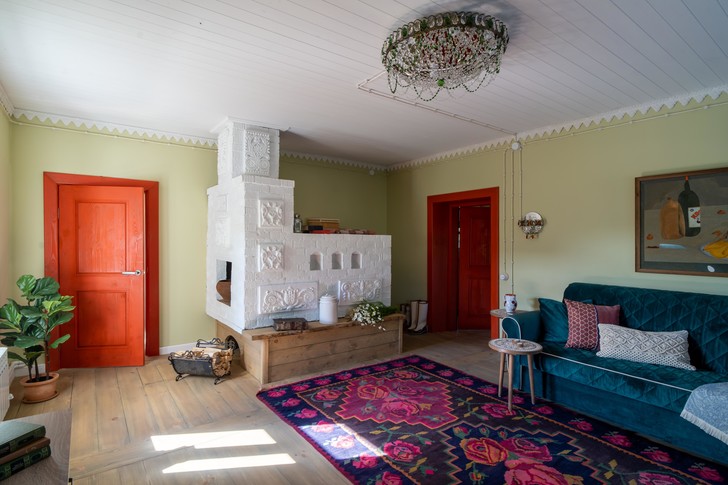 Wooden house on the shore of the Gulf of Finland

Eduard Zakharov and Olga Vetosheva, Horomystudio bureau, designed a house on the shore of the Gulf of Finland, the architecture of which combines modern panoramic glazing and carved platbands in the Old Russian style. “The village itself is new,— specify the founders of the Horomystudio bureau, Eduard Zakharov and Olga Vetosheva. — But in our project we decided to reflect not only modern architectural solutions, but also the traditions of pre-revolutionary dachas located in this part of the Gulf of Finland. This is how the motifs of carved decor arose, which can be traced in the design of windows and cornices. In the near future, similar elements will appear in the drawing of fences and additional buildings on the site.” Read about this project here.The house of 283 sq. m is a frame structure built of environmentally friendly materials with the use of energy—efficient technologies – a joint development of Horomystudio and the Institute of Passive House. 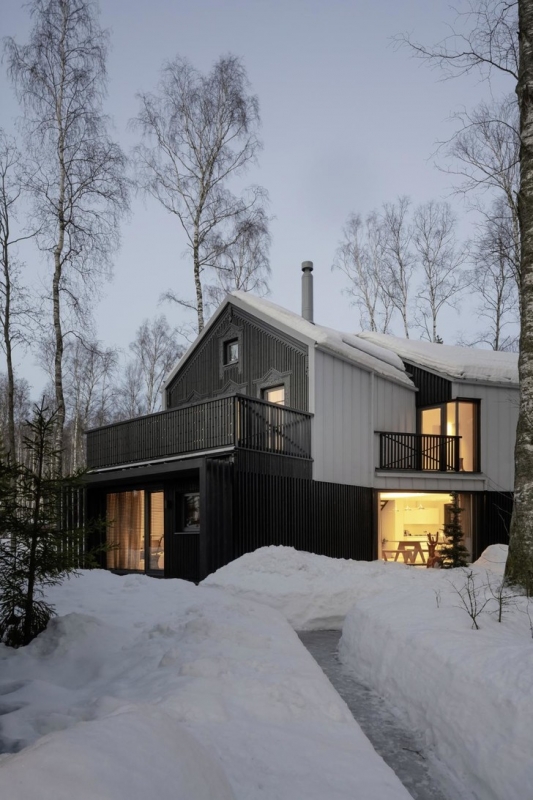 “I designed this house for myself, based on my ideas about a comfortable country life on weekends,” says designer Liana Kashtanova. — I wanted to let in more light and air, so the house has panoramic windows, and the height of one of them in the living room is as much as 6 meters! There is a gorgeous view of the pine forest from there.” You can review the project in detail in our special material.Lamps, Ocean Soul, Nowodvorski, IKEA. 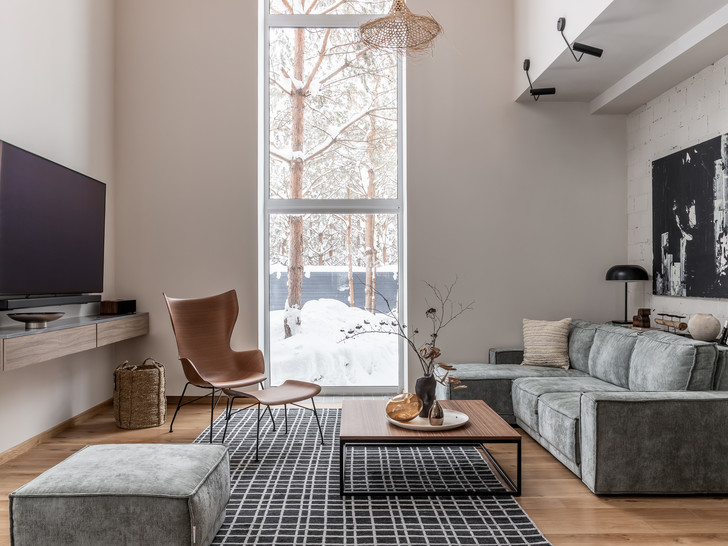 The console is made to order according to individual sketches of the author of the project.