Where to go for the most delicious ice cream this summer? We taste different varieties and inspect new establishments with bright and unusual design concepts around the world 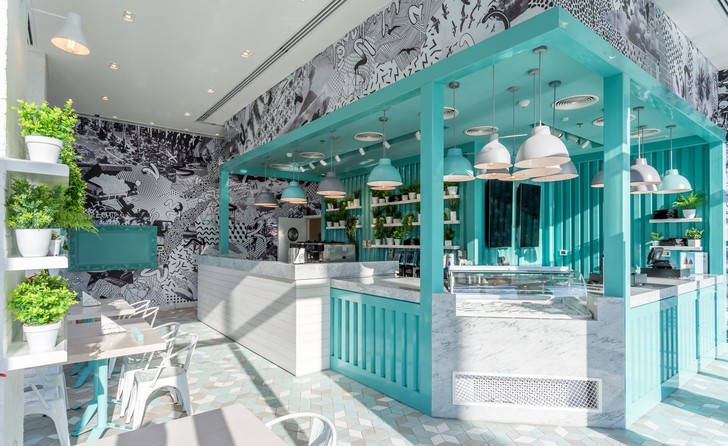 Visitors post almost all photos of the new gelateria in Dubai on social networks with the hashtag #nofilter. Indeed, with such a palette, filters are useless! The interior from the Canadian studio Navigate Design is dominated by mint, cooling shades in the spirit of Wes Anderson’s films, which fully corresponds to the theme and concept of the new institution on the corner of the City Walk 2 complex. White marble with picturesque veins in the counter decoration was combined by architects with painted wood, colored tiles and graphic b/ w walls. According to the name of the ice cream, it is not always possible to immediately guess the taste. Cookies, Cookies, Cookies & Cream and aromatic iced coffee are in particular demand. www.sweetsalvation.com 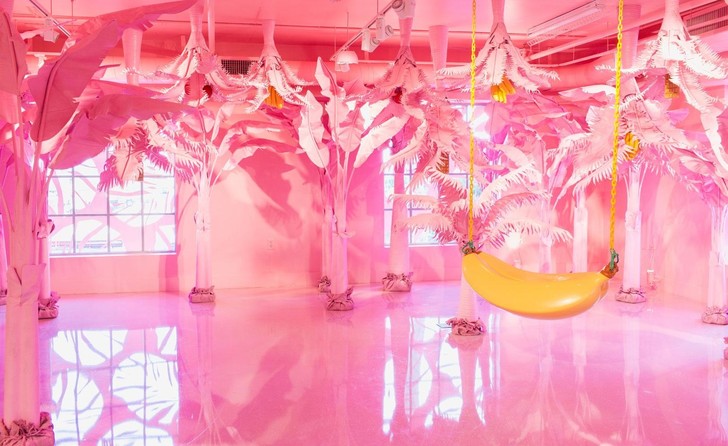 Four floors with installations by contemporary artists on the theme of ice cream and, of course, continuous tasting — a pink dream for a sweet tooth has become a reality in the new Museum of Ice Cream in Miami. Giant stylized waffle cones, a swimming pool filled with sugar pills, a room with banana flavor, a beach under the roof with kinetic sand sticking together like sweets in the palms, and many other attractions! The interior of the museum cafe is in the spirit of the 1950s. Branches are open in New York and San Francisco. www.museumoficecream.com 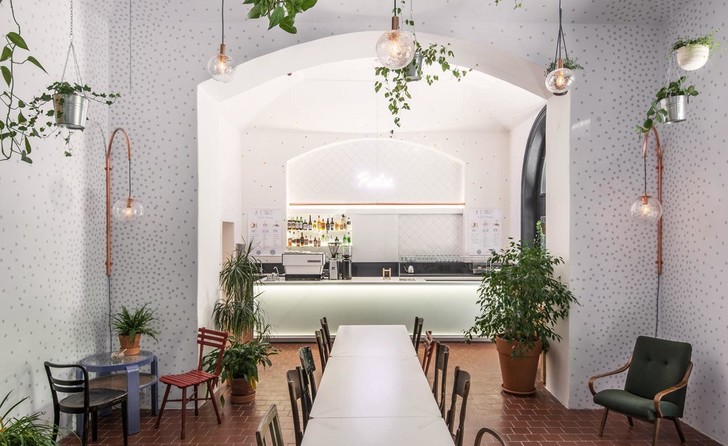 Before opening his own establishment, Lukasz Prokop traveled around the USA for a long time, studying local ice cream parlors for new unusual tastes and original design concepts. Returning home to the Czech Republic, he managed to put his knowledge into practice in his own project Parlor — look for a sign in the heart of Prague’s Karlin business district. There are more than 6 thousand (!) different flavors on the menu. The interior is designed by young designers Lenka Milkova and Marketa Bromova. The wall painting was done by designer Klara Sumova (Klára Šumová). The copper lamps are made to order, the furniture is mostly vintage. “The advantage of the institution is that it is multidisciplinary — this is in particular what I learned from my American tour,— says Lukash. — In addition to coffee and hot chocolate, along with ice cream, you can taste excellent alcohol here.” www.parlor.cz 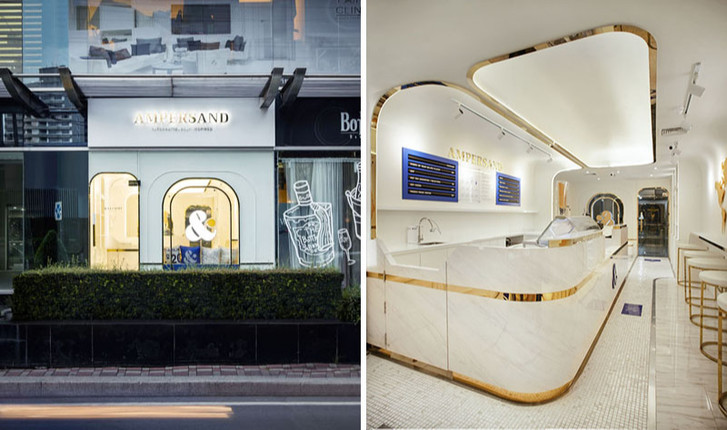 The Italian gelateria Ampersand in Thailand is the brainchild of the design bureau party/space/design. While developing the project, the architects were inspired by the theme of travel and international airports. So in the interior there were racks that evoke associations with check-in counters for flights, a lounge, signage, a dining area. The floors are decorated with airplanes, the walls are decorated with a stylized map of the world. The palette is white plus dark blue with gold flecks. To make ice cream, local confectioners use ingredients from all over the world, so they guarantee that they are ready to satisfy even the most demanding customer and avid traveler. www.ampersandgelato.com 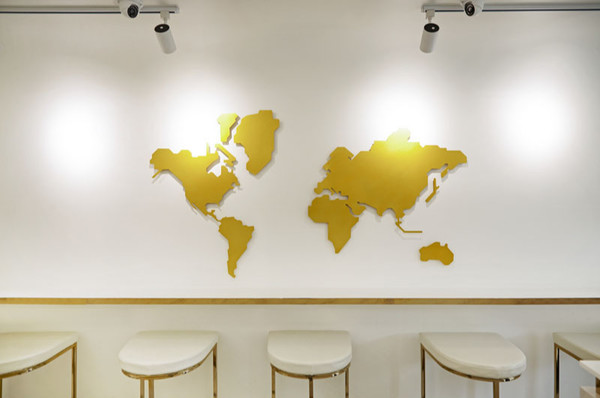 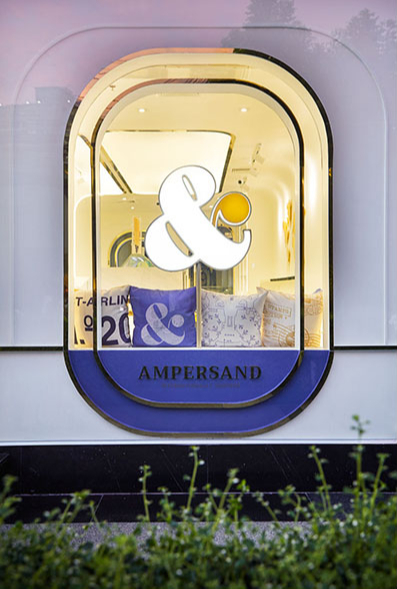 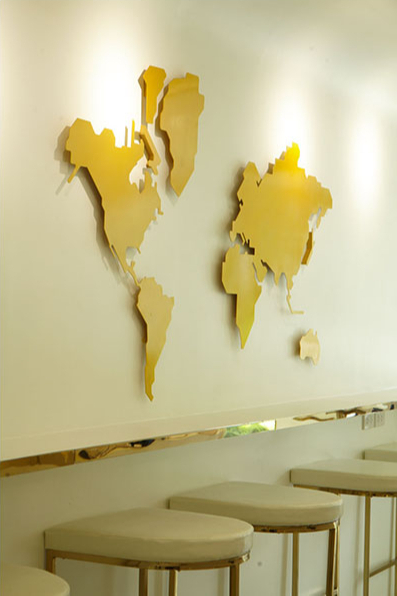 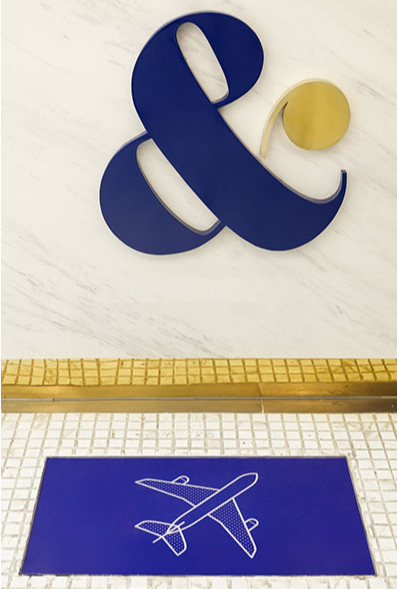 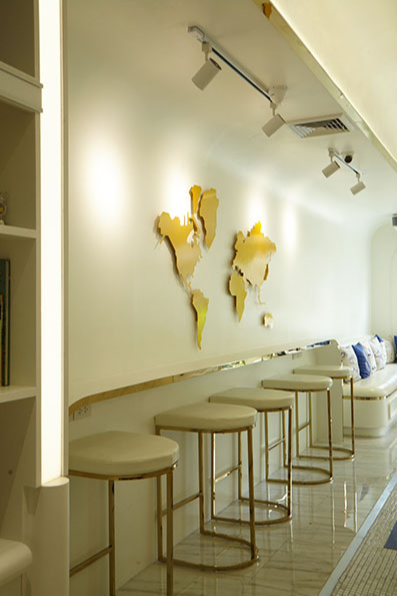 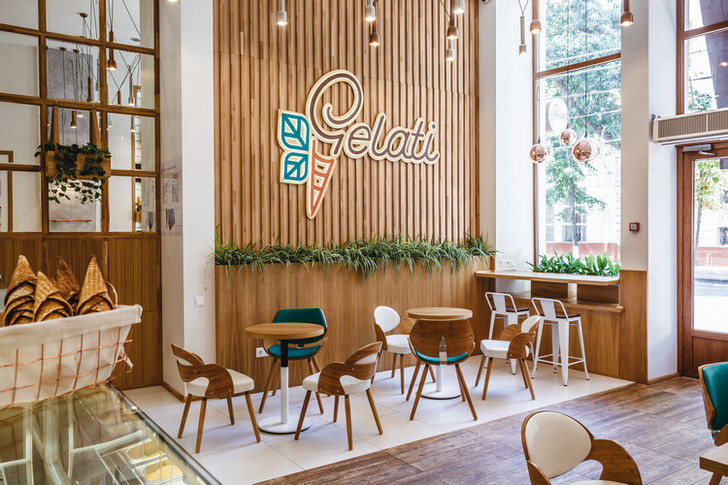 A real Italian gelateria has opened on Krasnaya Street in Krasnodar with an impressive menu — from unusual tropical flavors to classic ones. The ingredients are exclusively natural: fresh fruits, berries, nuts. The author of the project is designer Nikolai Petrov. The room is bright, with wide windows that freely let in the sun, greenery and wood in the decoration. Italian hand-molded tiles are also used in the design. Lamps — designer, Tom Dixon studios (Tom Dixon). The project was implemented in record time — in just a month. st. Krasnaya,102, Krasnodar, www.gelatti.ru 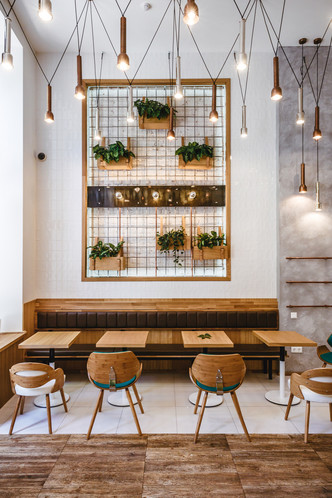 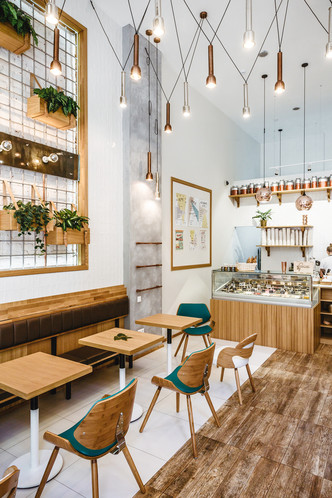 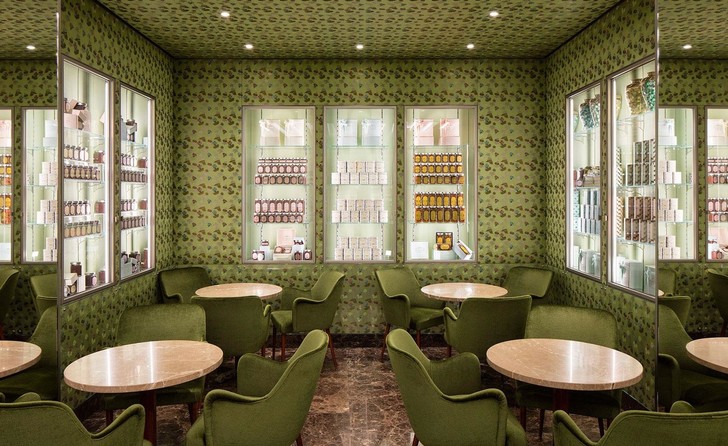 The fact that Italian ice cream is one of the best in the world, you can once again be convinced by visiting the famous Milanese confectionery Marchesi. The first institution under this sign opened in Milan back in 1824 on Via Santa Maria alla Porta. Now two new locations have appeared in the city — Galleria Vittorio Emanuele II and Via Monte Napoleone 9 (interior in the photo), in no way inferior to the oldest cafe. The signature color scheme of all three establishments is rich grassy. Be sure to try the signature Italian cake frostata with a scoop of ice cream. By the way, another confectionery chain has recently opened in London, read more about it here. www.pasticceriamarchesi.com 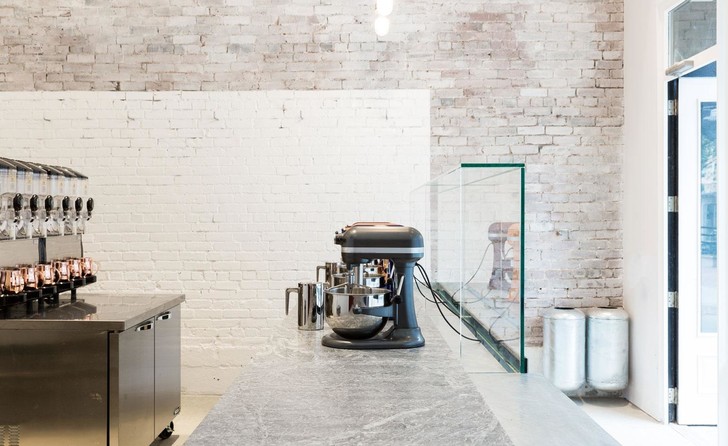 The gelateria in the Yaletown area of Vancouver is located in the premises of the former loading dock of the anchor warehouse built in 1912. The owners of the establishment, Michael Lai and Tommy Choi, invited the Scott & Scott bureau to cooperate. The architects have preserved the aesthetics of the loft. Moreover, coldness is just what is quite consistent with the topic. There is a lot of concrete, brick, galvanized iron in the interior.

“By the way, about metal surfaces, remember the feeling when you want to try to lick a frozen metal staircase somewhere on the playground as a child,” the architects laugh. — It’s funny, but the steel elevator evokes these memories in us personally. Perfect for an ice cream parlor!” www.madebymister.com 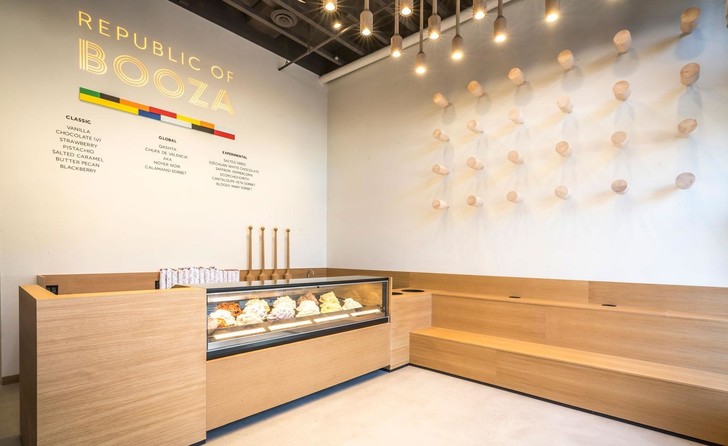 This cafe in New York’s Williamsburg with an ascetic interior is famous for the fact that incredibly delicious Arabic booza ice cream is prepared here. In consistency, it has a special viscosity — it appears due to a vegetable ingredient that slows down the melting of ice cream in the heat. Sahlab is added to the milk, which includes wild orchid root powder. It is recommended to try pistachio, coconut, salted caramel and classic oriental with the taste of “chestnut” (sweet milk cream). www.republicofbooza.com 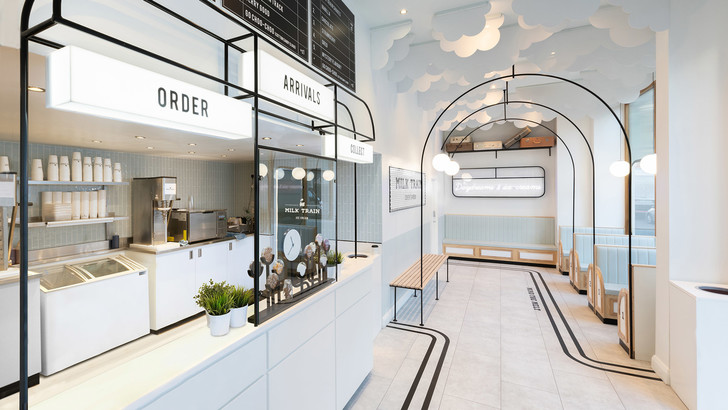 A playful light cafe has recently opened in a lively area of London — Covent Garden. This is the first establishment of the Milk Train brand: before that, they sold ice cream in small kiosks. The name itself became the starting point for interior design — the FormRoom studio was inspired by the aesthetics of a typical British train. Read more about this unusual project in our special material here. 12 Tavistock St, Covent Garden, London WC2E 7PR 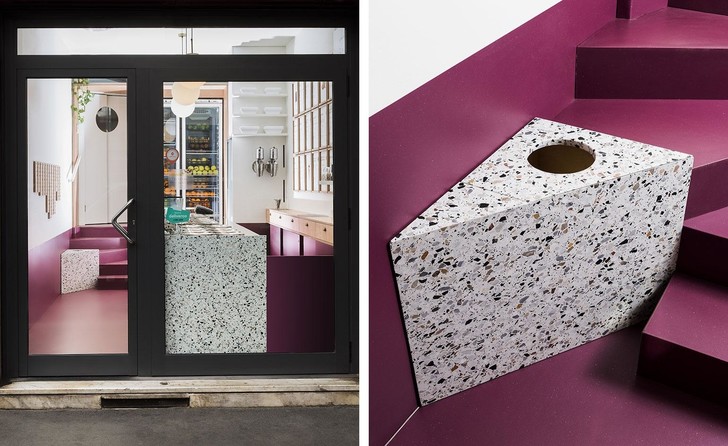 Gelateria La Prossima Fermata opened in Milan more than ten years ago, but recently it was decided to change the concept of the institution, including the interiors. The authors of the new project are Studio Wok bureau. Industrial—sized refrigerators, linoleum, stone and wood – the architects sought to create the feeling of a research laboratory, where the pastry chef, like an experimental scientist, mixes different flavors, reinventing the formula for the perfect ice cream. Be sure to try fruit mixes. Via Melchiorre Gioia, 131, Milan. 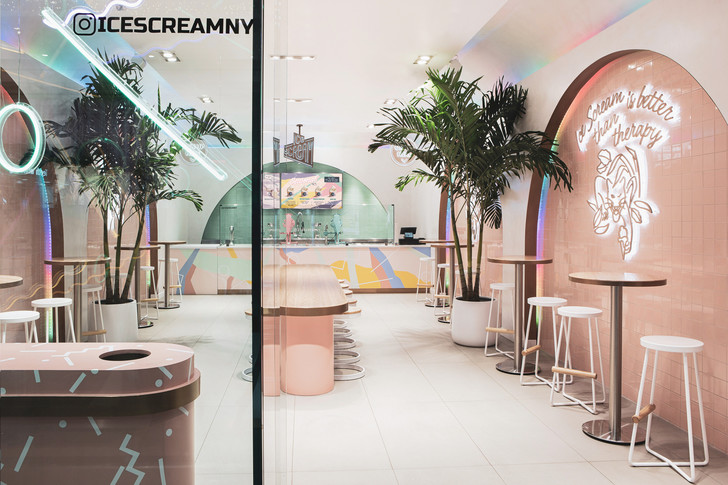 “Ice cream is better than any medicine” — this mantra greets visitors at the entrance to a new ice cream parlor in New York designed by the design studio Asthetíque. Bright bursts of neon in the window will make you look into the Ice Scream Shop, even if you didn’t plan it. The space itself resembles a sweet dessert. “We focused on the aesthetics of the Memphis group, but at the same time we wanted to make the interior more modern,” says Julien Albertini, co—founder and partner of the firm. A bold mix of pop art and kitsch will definitely appeal to millennials who grew up on sitcoms of the 90s. Read more about this project at the link. www.icescreamny.com 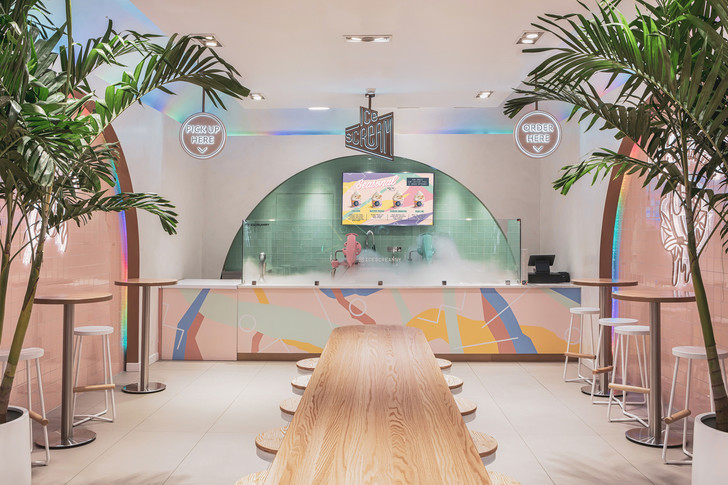