“This apartment has a difficult character, almost Bulgakov’s. When designing it, the customer and I did not strive to follow any particular style and allowed ourselves a little irony,” says designer Alyona Skovorodnikova 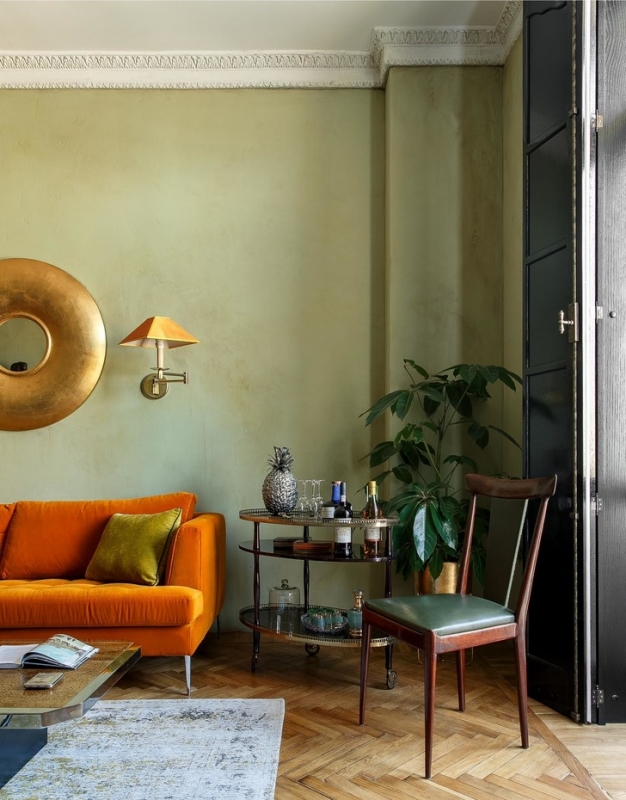 In the design of the living room, a complex combination of different metals is used: chrome in the decoration of a vintage coffee table with a ceramic top, brass, bronze and even gold potal on the mirror frame. Planters for plants, Zara Home. The rich orange shade of the sofa, Enjoy Home, is supported by antique sconces with original lampshades. 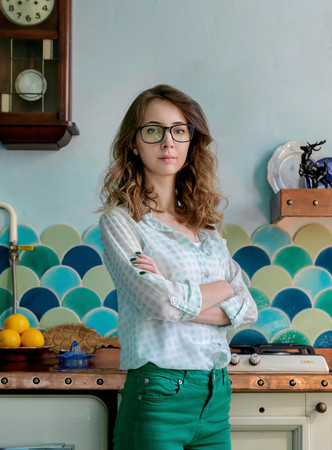 The author of the project is designer Alyona Skovorodnikova 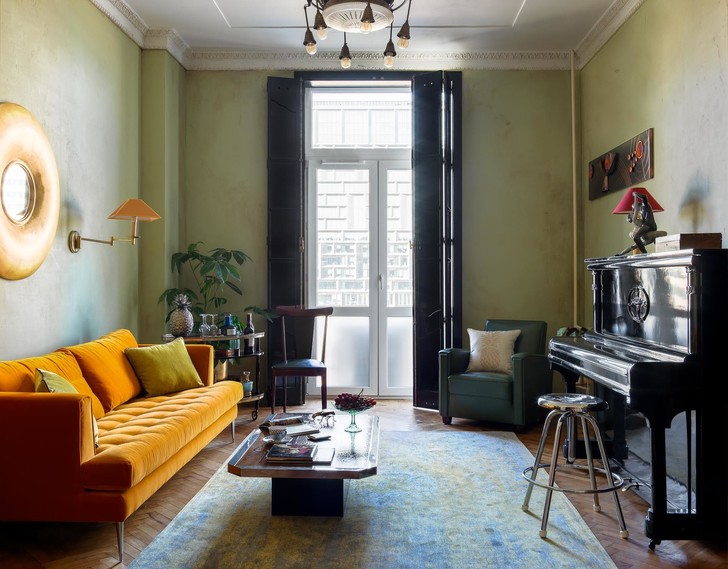 The brilliance of the restored piano, played by the owner, is supported by lacquered window shutters. They are made to order, protect antiques from the sun, give a blackout from the illumination of the neighboring building and significantly reduce the hum from the third transport ring.

“The apartment has a complex character, it resisted our intervention very much,” says designer Alyona Skovorodnikova. — There is not a single item or finishing element that would arrive, be mounted and take root from the first time. At first it was funny, then it was alarming, but in the end everyone accepted it. It’s not for nothing that the house has such a dubious reputation: the building was built in a Jewish cemetery, sometimes there is talk about witches on the forum of the house. But all is well that ends well, the customer is very satisfied with the implementation and feels great in this apartment.” 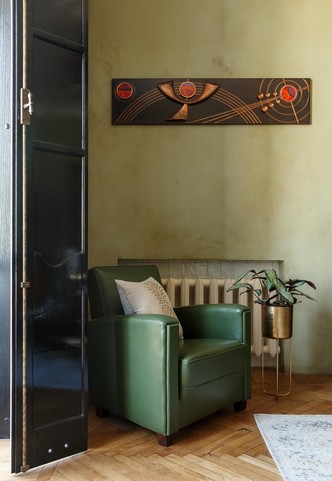 “We have abandoned the wall skirting board. For this reason, the parquet tiles around the perimeter of the rooms were replaced with new ones and driven under the layers of plaster walls, and the junction itself was securely fixed and aged.” 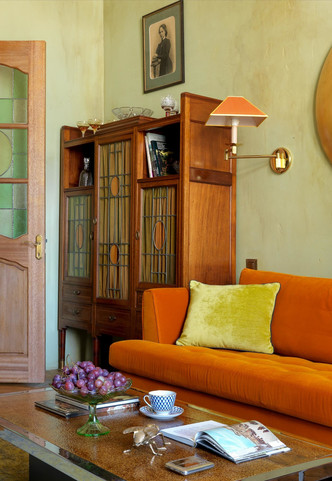 Antique showcases were brought from Europe. The lost parts were made to order in Moscow. The glazing of the interior door was replaced with stained glass windows, created based on the storefronts. Wall paint, Little Greene.

“The typical Stalinist layout — a long corridor, along which there is a walled-up auditory corridor from the neighboring entrance, two rooms, a small kitchen, a separate bathroom – was not changed for the sake of preserving the historical parquet and stucco. But due to the removal of layers of drywall left over from the renovation of the 90s, the area of the premises increased slightly.” 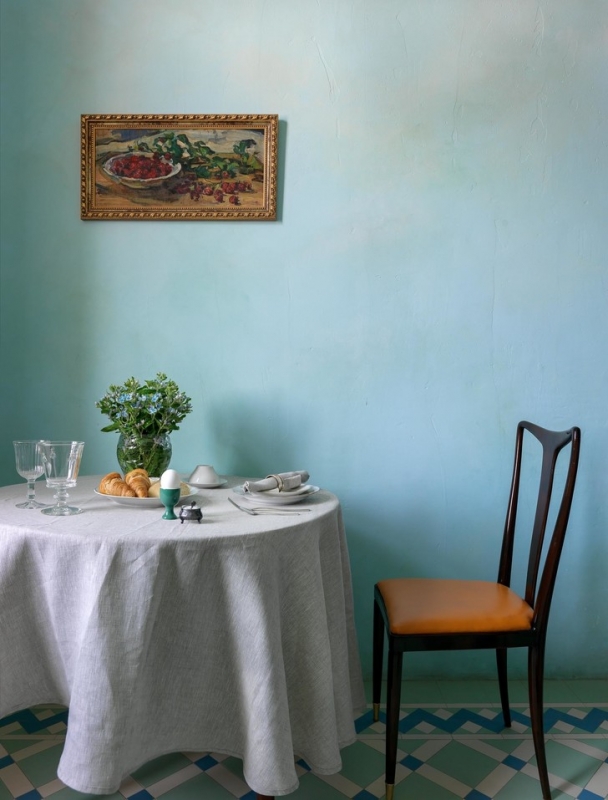 The dining set is made up of vintage chairs and a table left over from the previous tenants, which was restored and supplemented with brass elements to match the chairs. Wall paint, Dulux.

“Parquet, stucco, doors and cast-iron radiators were preserved and restored at the request of the customer. Only windows and plumbing were replaced. The Soviet ceramic tile was originally laid behind the cast-iron radiators, it was dismantled, but the idea itself was preserved, choosing a more “lived-in” relief ceramic tile. In the double door of the living room, the old glass was replaced with a stained glass window, made based on the stained glass in antique showcases. Spectacular broom “carpets” were spread out in wet areas, and in the kitchen they took liberties in the form of multicolored ceramic scales.” 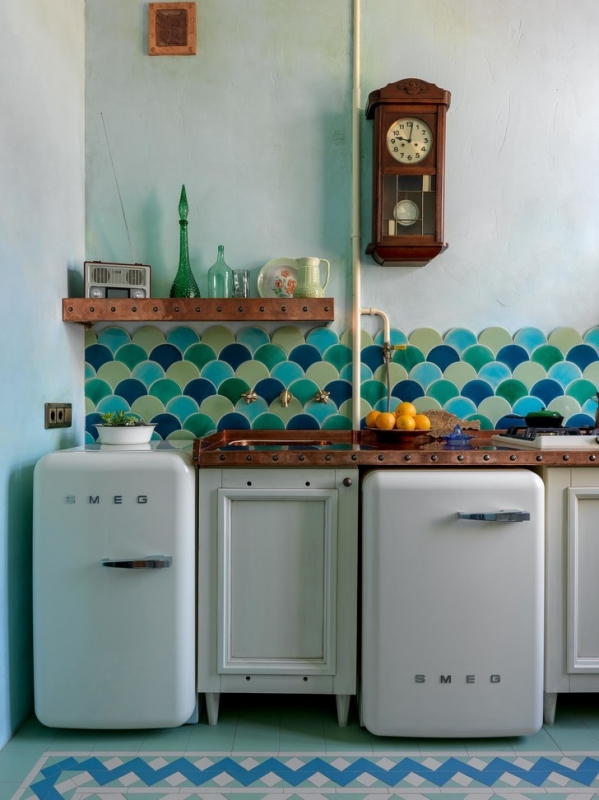 Customers cook little and rarely come to Moscow, so the kitchen set is very compact. The facades of the lockers repeat the design of the preserved mezzanine doors. All the equipment is from the retro Smeg line. The table top and shelves with hidden lighting are made of copper. It was not varnished so that the copper naturally aged. The apron is lined with multicolored handmade ceramics.

“The owner wanted the walls to be decorated, faded and picturesque – like in the Italian province” 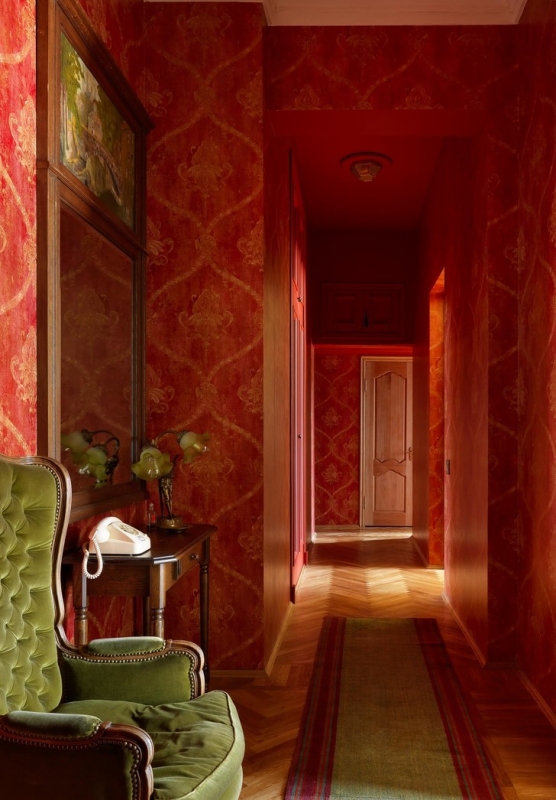 The customer wanted an interior without the feeling of a new model. In the long corridor typical of Stalin’s houses, the old parquet and stucco were preserved, and after a long search they picked up luxurious Silk Collection wallpaper from Aura, which look like Soviet and lived. With the help of a special scanner, paint from Benjamin Moore was selected to match the color of the wallpaper.

“The owner wanted the walls to be a backdrop for vintage furniture, but at the same time self—sufficient and, as it were, cherished, faded – like in the Italian province. The first stage is the application of chips, irregularities and scuffs and painting in pre—approved shades, carried out by the builders. Then professional decorators aged the surface as much as possible and brought it to the desired appearance, with spots, streaks and even smudges.” 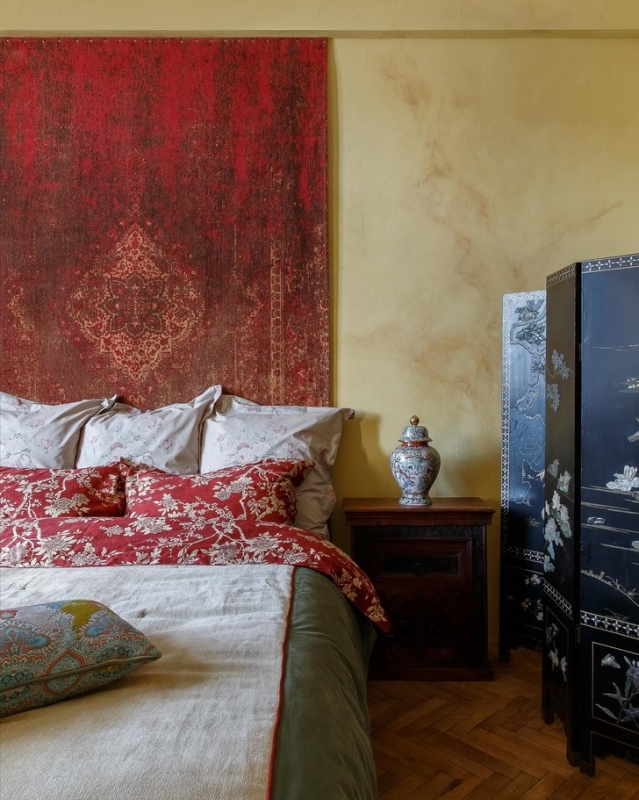 We decided to emphasize the interior of the bedroom with oriental notes. So there was mahogany, carved bedside tables and an antique chinoiserie screen. Bed, “Ascona”, with Ergomotion mechanism. Decorative plaster is created on the basis of Dulux paints. 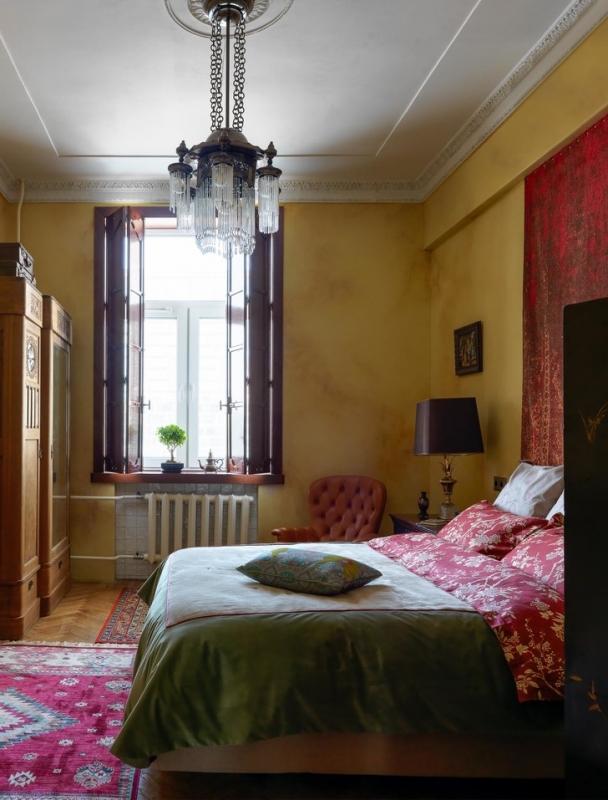 The Soviet ceramic tile was originally laid behind the cast-iron radiators, it was replaced with a more “lived-in” relief ceramic tile.

“Vintage items were selected by different European suppliers. Especially interesting is an old Chinese screen with inlay in the bedroom and European stained glass windows in the living room. The wardrobe in the bedroom, the piano and the desk were at the customer even before the repair, but they were carefully restored. The interior of the bedroom was diluted with oriental notes. So there was a mahogany, carved bedside tables and a chinoiserie screen. But the main emphasis is a bright red carpet on the wall in the best traditions of Soviet apartments!” 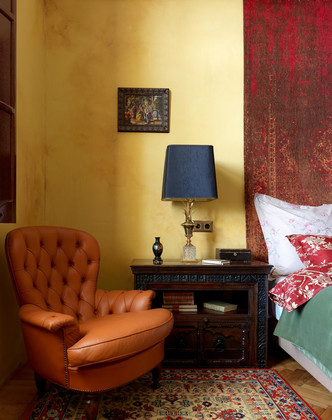 The main accent of the bedroom is a carpet on the wall at the head of the bed in the best traditions of Soviet apartments. 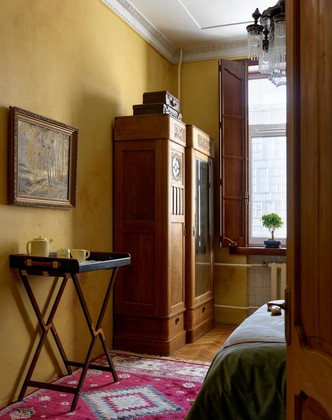 The interior of the bedroom was defined by an antique wardrobe with carvings from the owner’s collection. Breakfast table, Ralph Lauren Home, vintage.

“At the final stage of interior decoration in the apartment, as it usually happens, various suppliers and contractors have become frequent. And everyone wondered how it was, why didn’t you finish the repairs, why did you leave such walls and did you really do anything here at all? For us, this was the main compliment and proof that the atmosphere of the old and lived-in apartment turned out to be really convincing!” www.skovorodnikova.ru 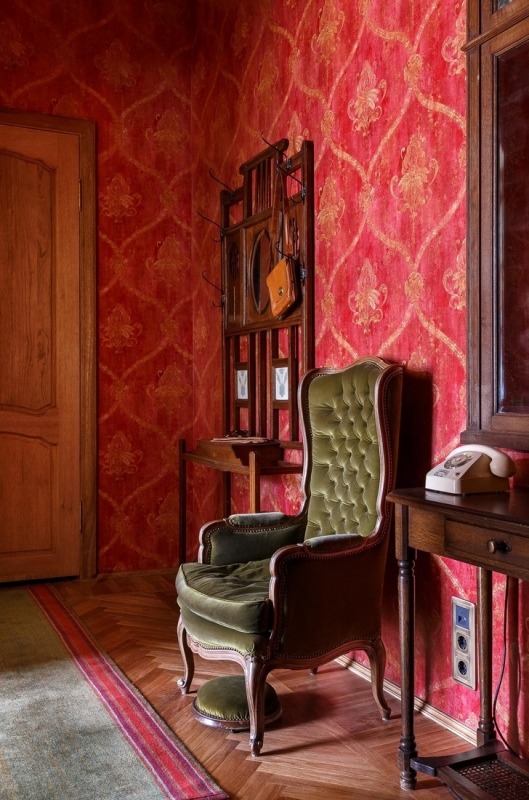 Authentic green carpets became the final touch of the Soviet interior. They were lucky to buy them off the Internet in a very decent condition.