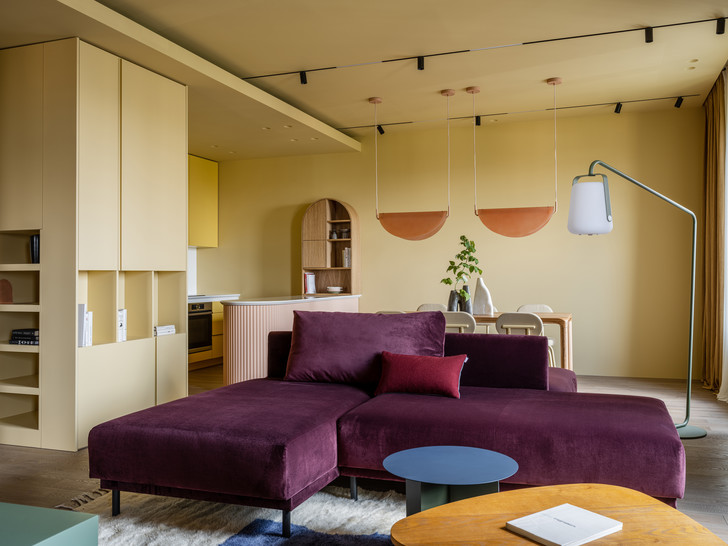 The sofa is made according to the sketches of designers by Dream Manufacture. Floor lamp, Fermob. Decorative pillow, Atelier Tati. Technical light, Centrsvet. Parquet board, Coswick. Paint, Tollens. 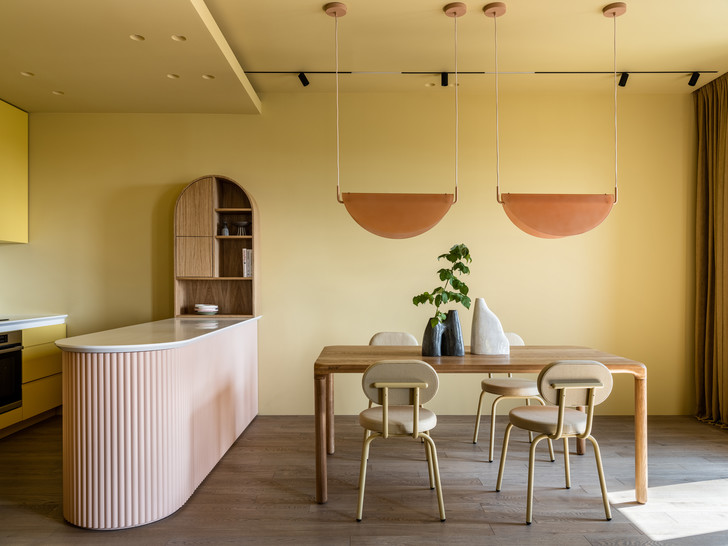 «The customer is a young girl, bright and very unusual. We have known each other for a long time and worked together on another project. There was only one wish: to make a new apartment better than the previous one. Over the past five years, we have all «grown up», so we had to find new solutions to old problems,» the designers of the Salmon Lair studio say. 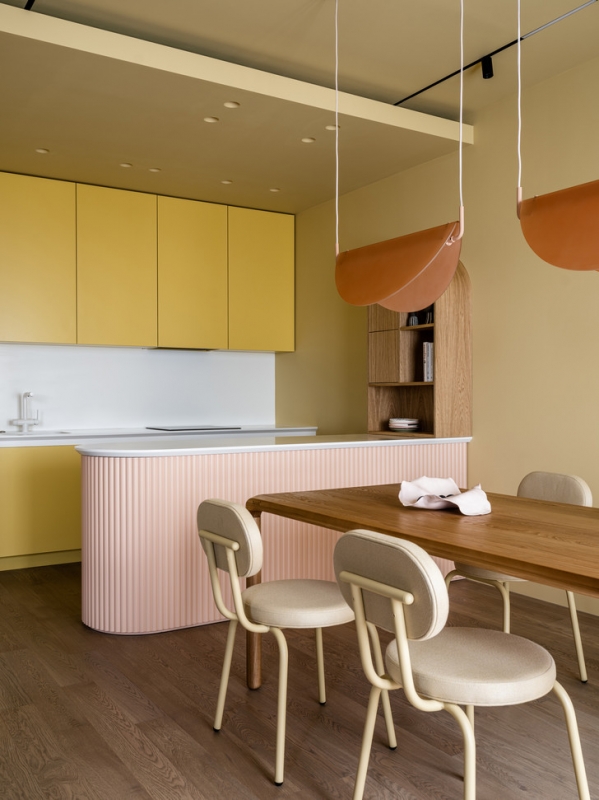 The kitchen and the island are made to order according to the sketches of designers. Dish, haj.x.gan. 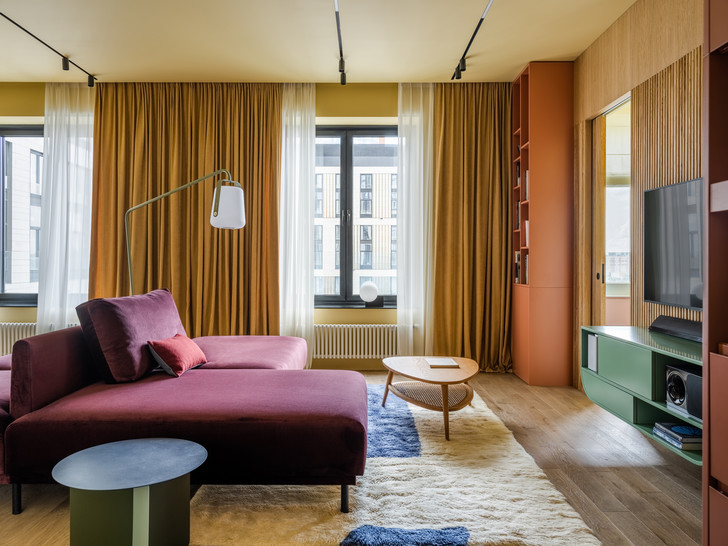 Blue table Cielo, Remember. Wooden table, La Redoute. Carpet, Beni Fez. The TV cabinet is made to order according to the sketches of designers. There is a lamp on the window, &Tradition. Textile window decoration, Tish Home. Radiators, KZTO.

«There were four bathrooms in the apartment, which we combined into two full bathrooms. A utility block was organized between them, where a laundry room and all the necessary equipment were placed in closed cabinets. This made it possible to divide the apartment into two parts: public and private. In the public block, we combined the hall, kitchen and living room, creating a space for meetings with friends and events. The customer likes to gather large companies, so we have provided different scenarios for joint classes. The kitchen has a large island where you can cook together, and a dining table for six people. The sofa is facing in two directions. This was done so that the guests could freely communicate and see each other while doing different things. At the same time, we even have a place left for dancing.» 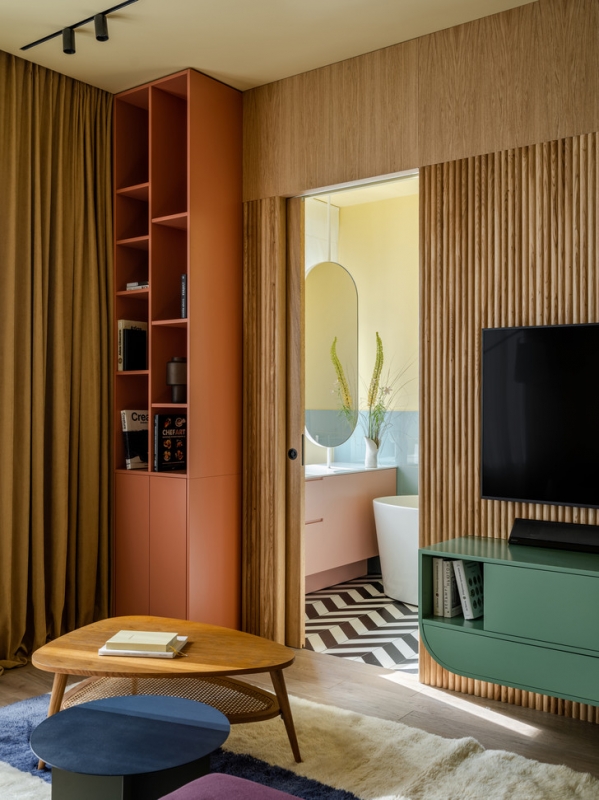 The cabinet is made to order according to the sketches of designers. 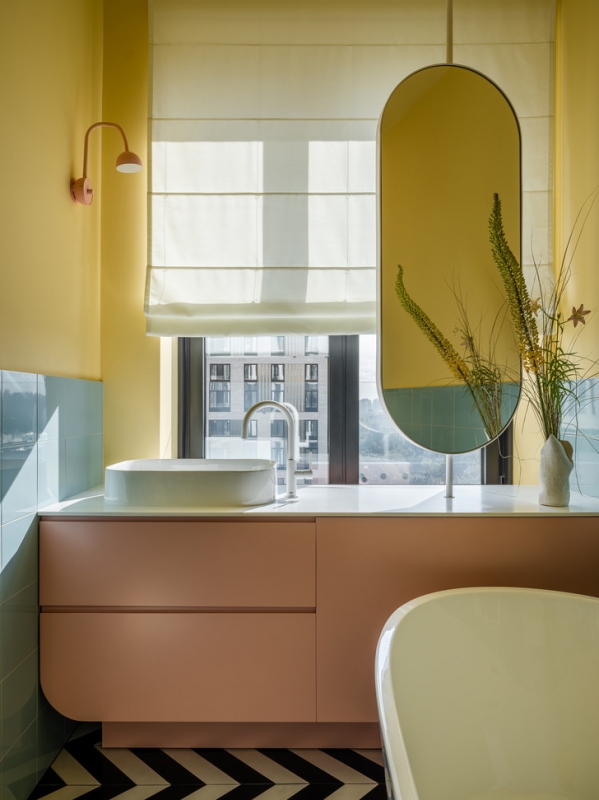 Guest bathroom. Wall and floor tiles are made to order. The cabinet is made to order according to the sketches of designers. Sink, bathtub and toilet, Galassia. Shower system, bathtub mixer and accessories, Tres. The mirror was designed by the studio and made to order at Steklomet. Bra, Northern. Vase, haj.x.gan.

«In the private block there is a bedroom with a separate bathroom and an office, which in the future may become a nursery. The hostess wanted this area to be hidden from prying eyes, so from the living room side we disguised the doors under wooden wall panels.» 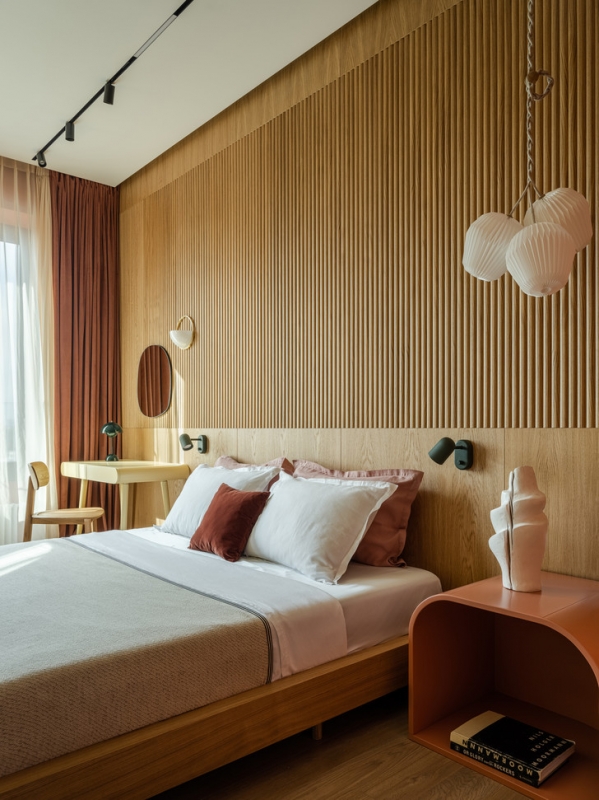 «The hostess loves bright colors. Her last apartment caused a flurry of comments that you need to be crazy to surround yourself with so many saturated colors. The customer was predicted to be quickly tired of multicoloring. However, this did not happen, and in the second project we used even more shades.» 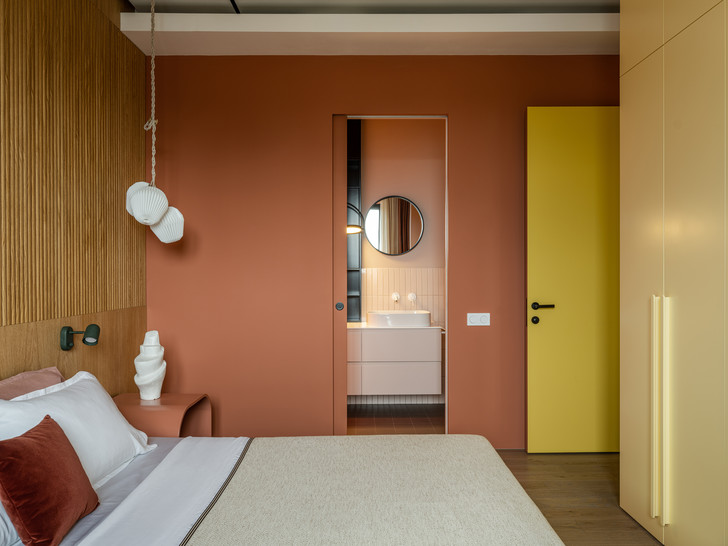 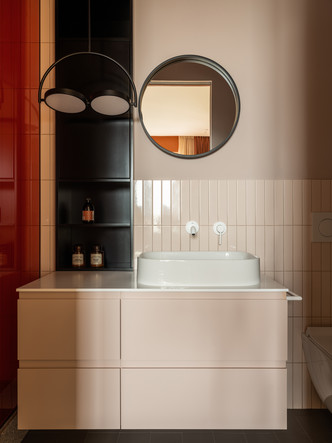 Wall tiles, 41zero42. The cabinet and the rack are made to order according to the sketches of designers. Sink and toilet, Galassia. Sink mixer and accessories, Tres. Pendant lamp, Bolia. 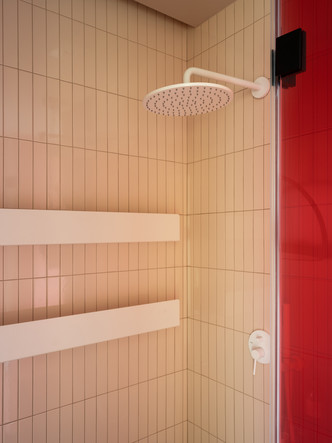 The shower partition was designed by the studio and made to order at Steklomet. Shower system, Tres.

«In order not to create an uncontrollable color madness, we chose several shades that repeat from room to room, linking the entire apartment together. After that, accents appeared in each room, creating a different mood. We also brought the idea of a «personal sun» from the last project. In that apartment we painted the balcony yellow to fill the whole space with warm light. In this project, the «buffer» between the two zones became yellow. Thus, the «sun» settled in the very heart of the house.» 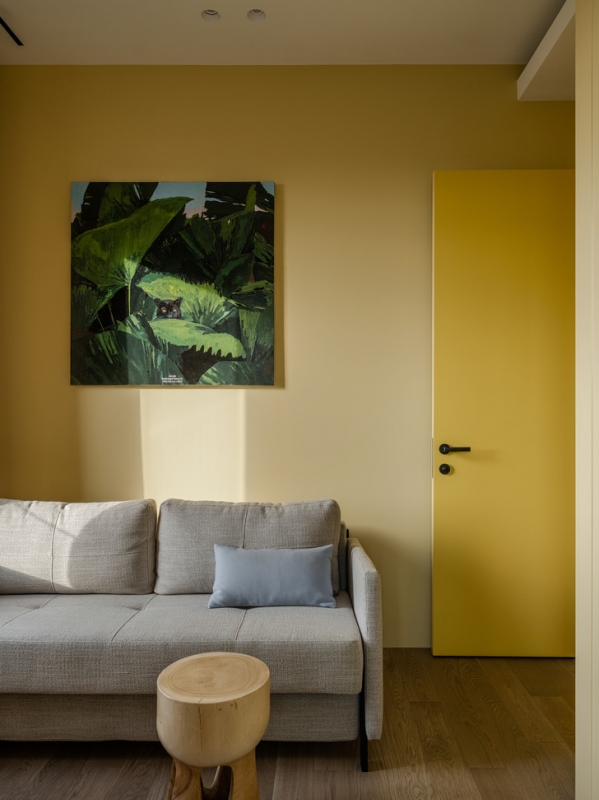 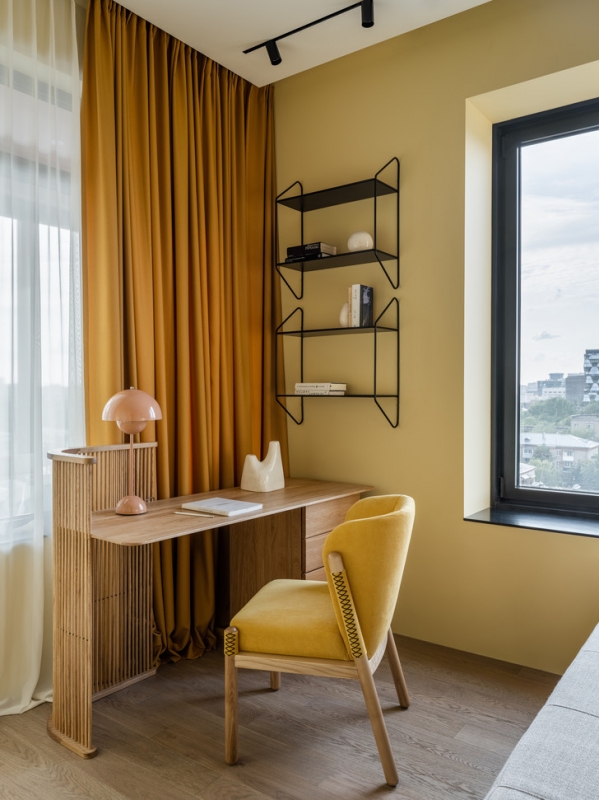 «In addition to the color, the interior is filled with unusual objects. For example, in the living room there is a floor lamp with a removable «head» that can work for several hours autonomously. It is convenient to take the lamp with you on a country trip or on the balcony to sit in the evening. The bedroom was decorated with lamps on linen cords, which can be intertwined according to the mood and even fastened at different levels with a large wooden pin. The rotating mirror in the guest bathroom appeared due to the need to open the window and the technical hatch, but in fact it turned out that this is an excellent tool for controlling solar glare. And the «cherry on the cake» was the bright red shower partition, which creates a club mood in the bathroom.» 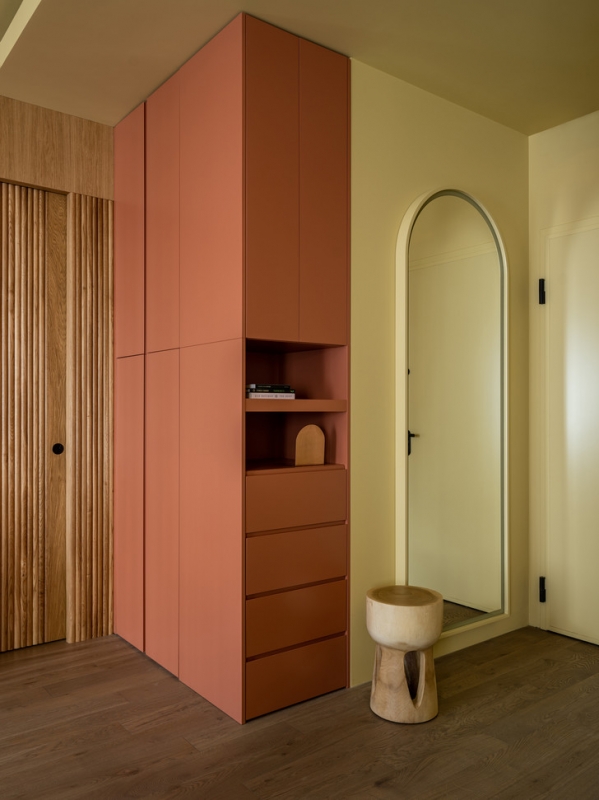 The cabinet is made to order according to the designer’s sketches. The mirror is designed by the studio and custom-made by Lena Lenskikh from Zerkalaaa.