The owners decided to rent this object for a short-term lease and invited a designer to create an interior that would be relevant for guests of the Northern capital. 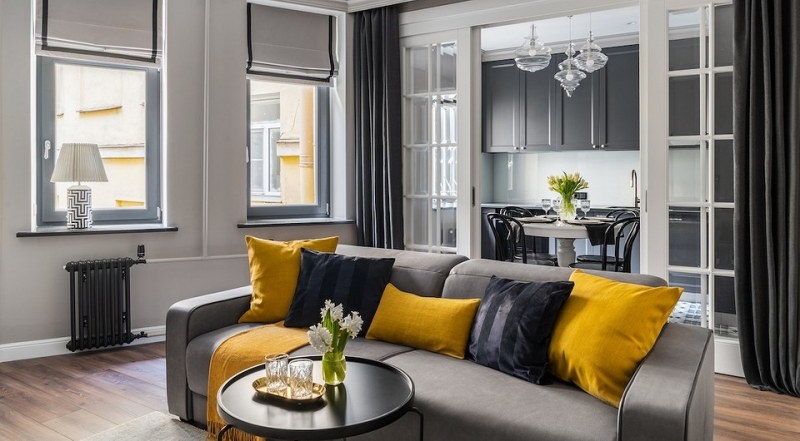 The owners of this two-room apartment in the old foundation of St. Petersburg wanted to create a comfortable and attractive object for daily rent. Potential tenants were identified as a couple or a company of four people. The designer Irina Shestopalova was faced with the task of creating a space in which this company could be accommodated, to make a new beautiful interior with modern comfort, but taking into account the specifics of the location of the historic house. 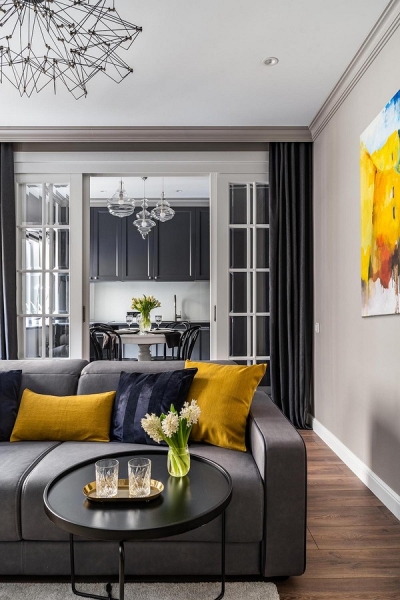 According to the original plan, the apartment had two rooms, a kitchen, separate bathrooms, and a long corridor stretched from the hallway to the far room. There was no need to change the layout globally, in two rooms it is really possible to equip the necessary bedroom and living room with a sofa bed. 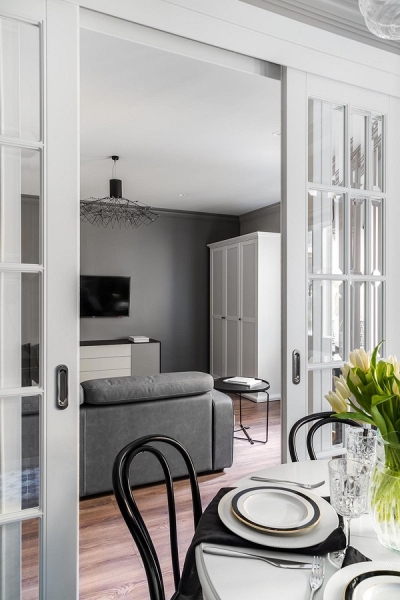 The change was made to the layout of the living room and kitchen. The existing partition was replaced with a sliding glass one. This made it possible to visually expand the space and, if necessary, combine these zones. 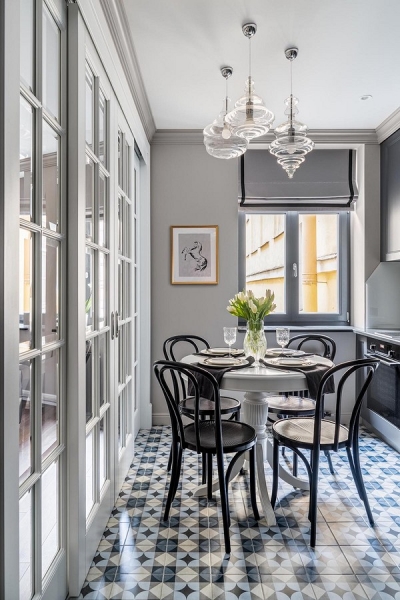 “The choice of finishing materials is always a balance between the style of the interior and the budget for its implementation. In addition, in this case, we always kept in mind that materials should serve as long as possible in the apartment for delivery,” Irina comments. 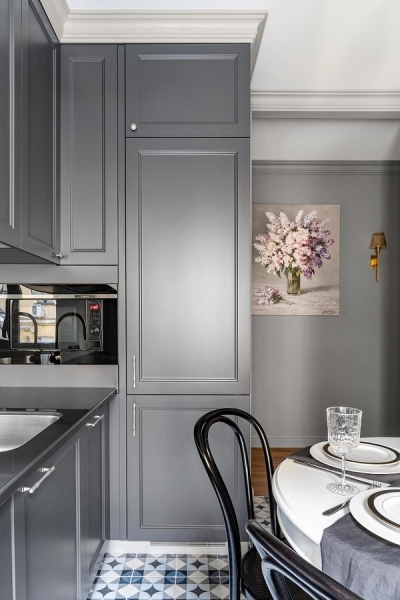 Therefore, paint was chosen for wall decoration, and moldings were made on the wall behind the headboard of the bed in the bedroom. High ceiling cornices, painted in the color of the walls, made it possible to slightly raise the height of the ceilings (in addition, they were increased by disassembling the floor during repairs).

There are tiles with a geometric pattern on the floor in the hallway and in the kitchen. Laminate flooring was chosen for residential areas in order to be practical.

The bathroom was decorated with tiles. The floor is the same as in the hallway and in the kitchen. On the walls there are light rectangular tiles laid vertically. There are also high ceiling cornices here. 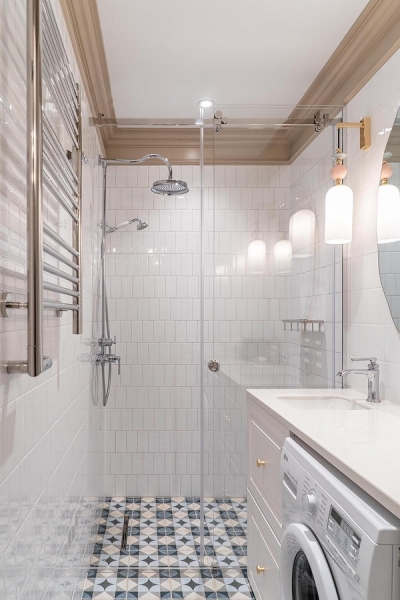 In the bathroom, wallpaper was added to the mosaic on the walls, which made this area less utilitarian and added comfort. 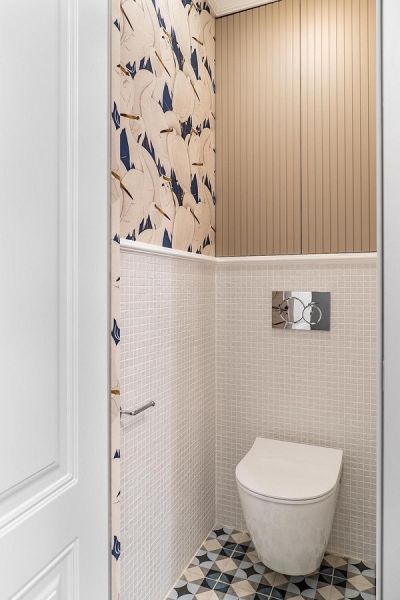 The main storage is represented by cabinets. They are in the living room and bedroom, they chose free-standing cabinets, and this is not accidental. According to Irina, this decision is due to the configuration of the apartment, as well as the style of the attempt to make hints at the era of the construction of the house did not involve built-in furniture. 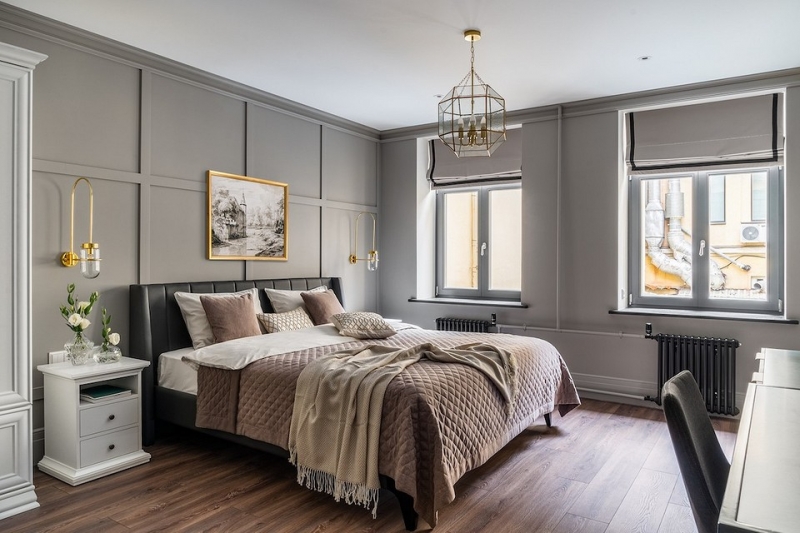 Only the kitchen set was made built-in. The necessary appliances were entered into the corner kitchen, including a full-size refrigerator, dishwasher, oven and microwave, a two-burner hob was chosen, since there is unlikely to be much cooking in the apartment for daily rent. At the same time, there is enough space left for storing dishes.

Household supplies are stored in the vestibule, which is allocated in the entrance area. 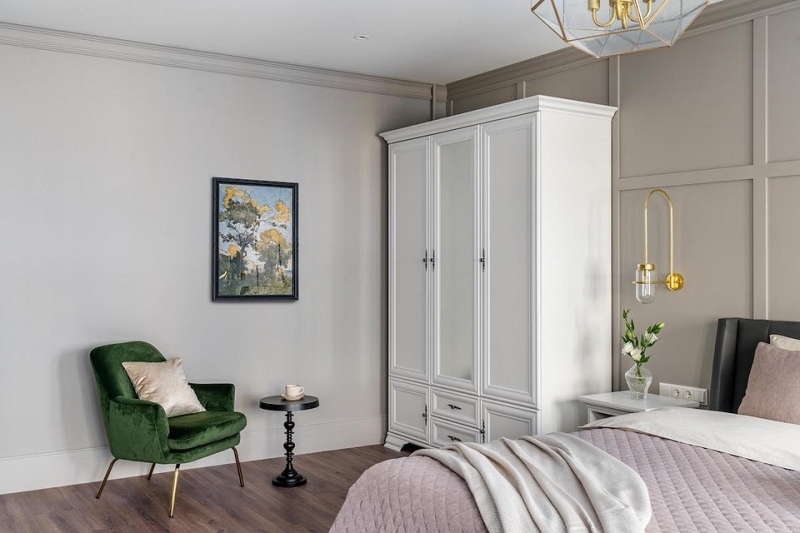 “We didn’t build complex lighting scenarios. Functionality and aesthetics are the most important tasks in the design,” comments the author of the project. 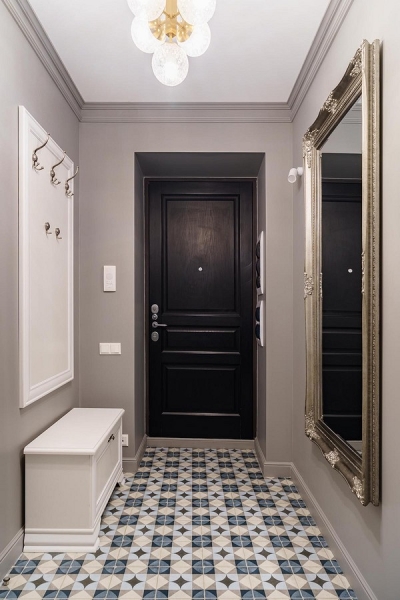 The overall color scheme of the apartment is a continuation of the atmosphere of St. Petersburg. Calm, monochrome, sometimes going into cold shades. Such rigor is diluted by small bright accents in the form of paintings and posters, decorative textiles support them. In the evening, with local soft light, the game of warm and cold comes to life. The bathrooms, due to their small area, are solved in the lightest possible palette. Only furniture and beige paint are used in them. 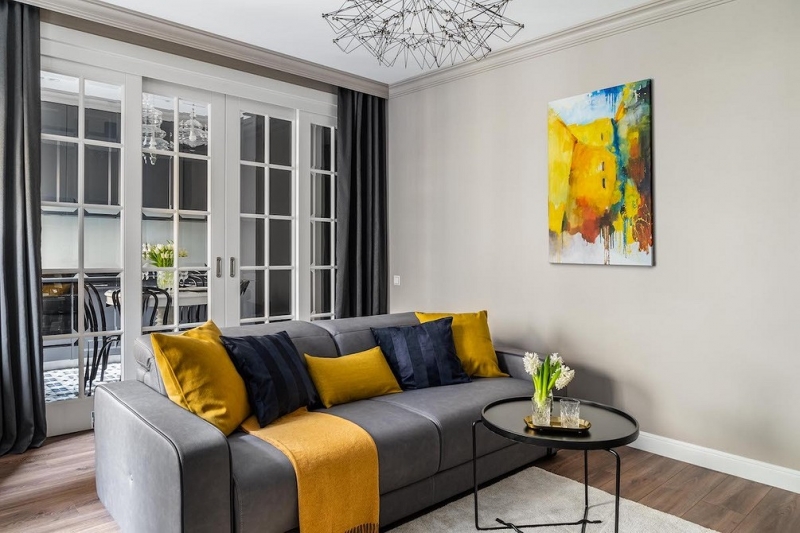 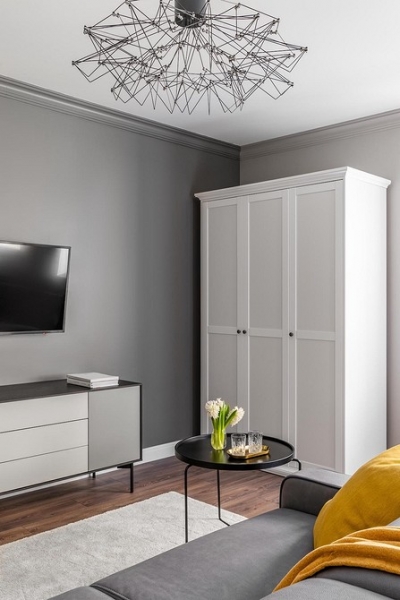 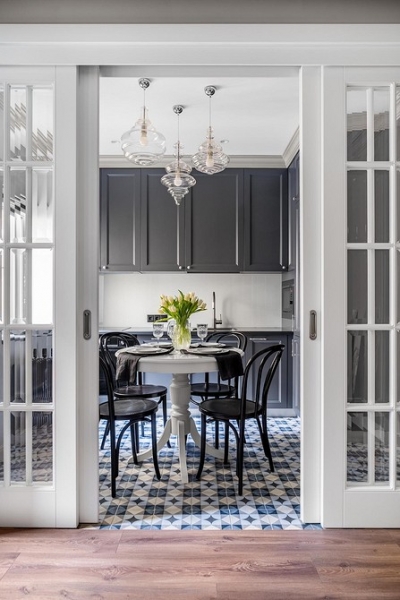 View of the kitchen

View of the kitchen 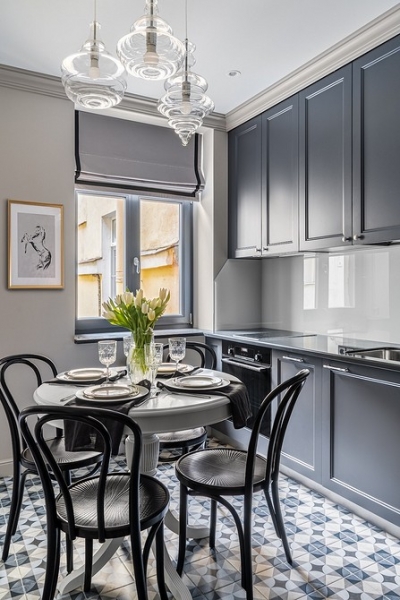 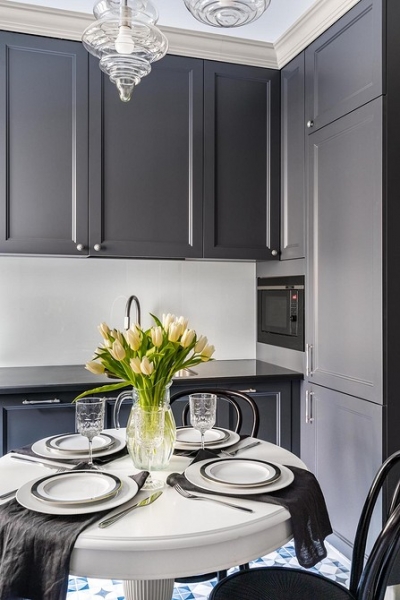 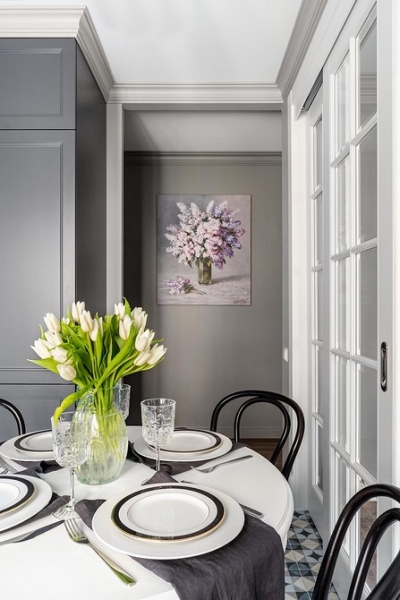 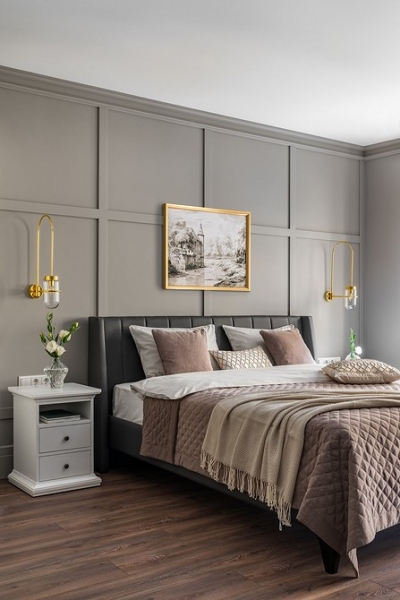 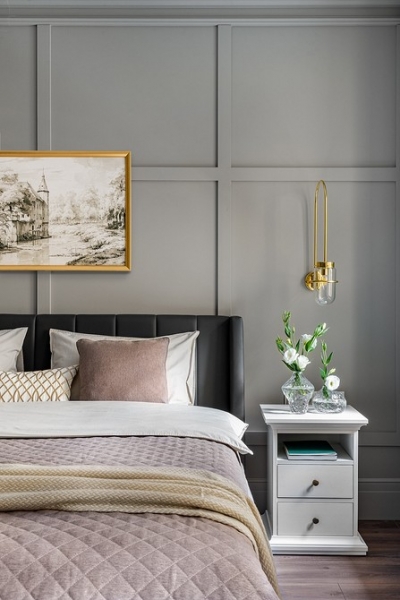 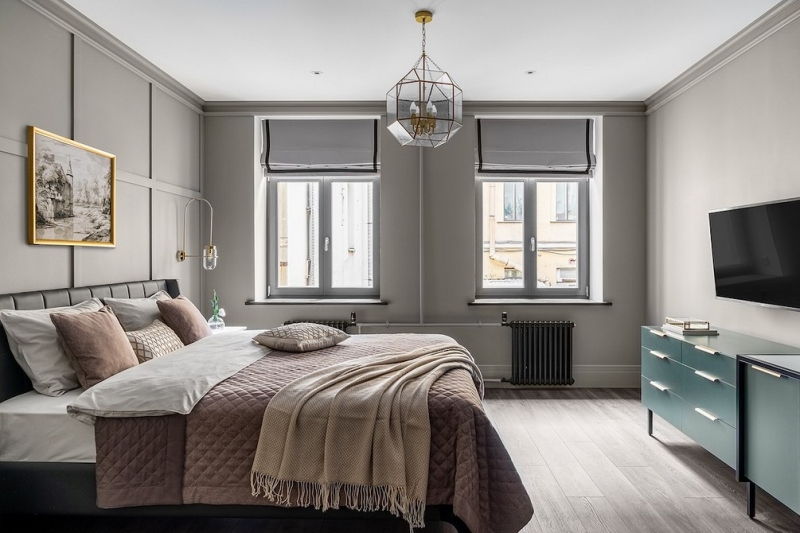 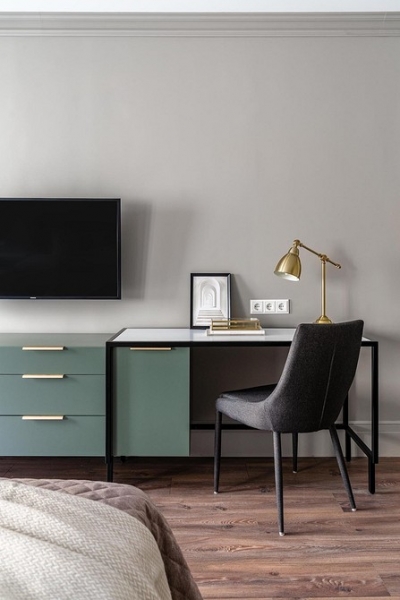 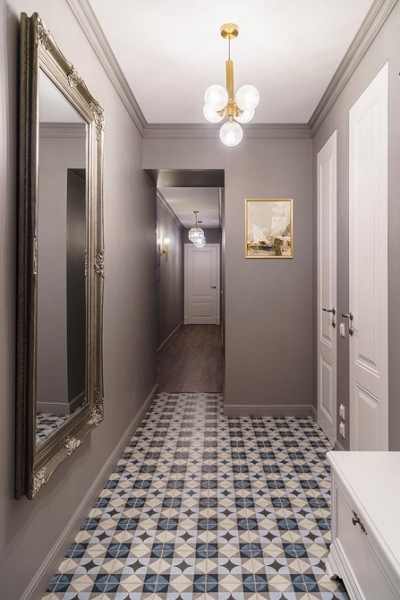 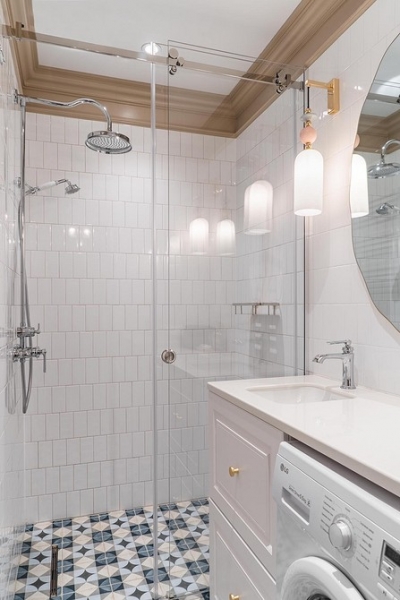 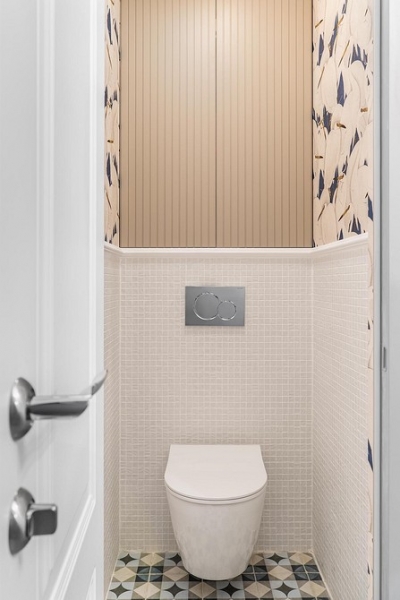