We show what a studio in London looks like, where a hit from Netflix is coming to life. 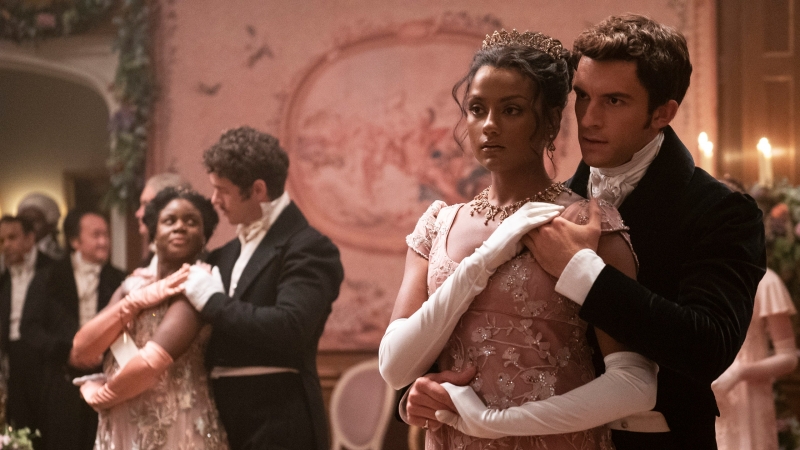 The second season of The Bridgerton series will be released on Netflix on March 25. It will be dedicated to Anthony Bridgerton (played by Jonathan Bailey), who is depicted here with a new character — Kate Sharma (played by Simone Ashley).Photo: Liam Daniel/Netflix © 2022

Fans of “Bridgerton” should get ready: the second season of the series is released on March 25. So, where was the shooting this time? It’s hard to believe, but more than half of the scenes were shot under the same roof of a studio in north London. This is a large-scale space with an area of more than 110,000 m2, where you can see everything: from the Bridgerton living room and the paved street that leads to the Modiste store, to a two-story decoration that was redesigned for three balls at once. The studio where the first season was filmed also accommodates 54 film sets, recreating realistic locations for the second season. Often these co-existing spaces are changed in the process, thus creating a new environment. You immediately realize that this is one of those places where you can get lost and wander for hours. 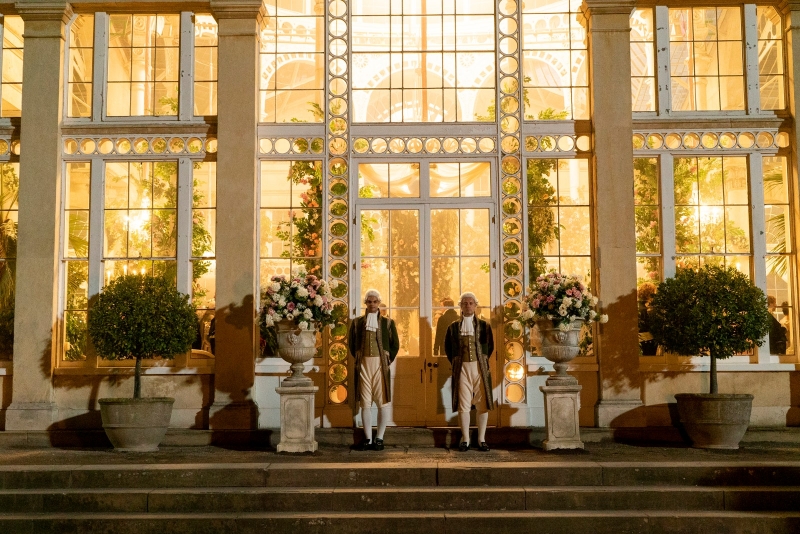 “I live here,” says production designer Will Hughes-Jones during a tour of the pavilion last fall, confirming that he has repeatedly had to rescue those who got lost in a huge maze. “It takes about ten days to learn how to navigate here.”

One of the reasons why the filming spaces of the series make such a grand impression is the detail that is close to reality. Devoted fans know that the Bridgertons are filmed not only in the studio, but also in such important British locations as Hampton Court Palace, Wilton House, the Great Windsor Park and Sayon Park. In the second season, the film crew visited 86 different venues, but Hughes-Jones notes that in each scene special attention is paid to the scenery of the Regency era, which are carefully recreated both at historical sites and in the pavilion. 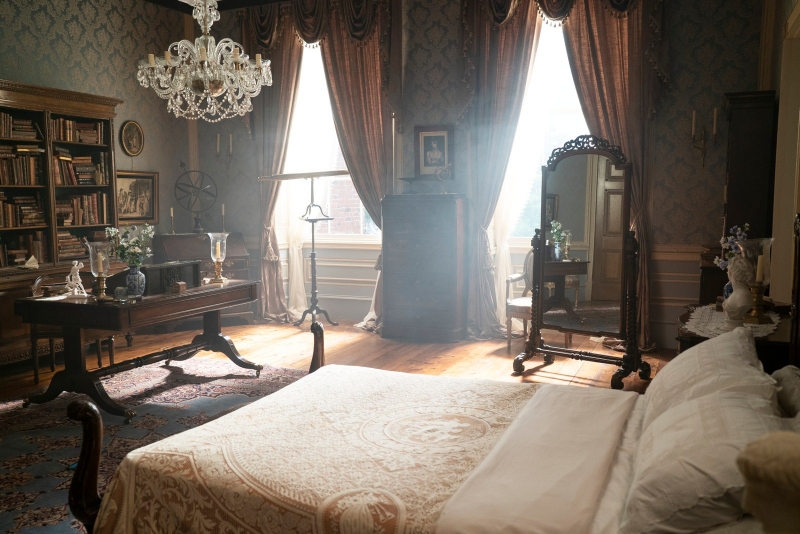 Daphne’s former bedroom is now home to Eloise, who has filled the room with books and a portrait of feminist writer Mary Wollstonecraft.

“I’ve been looking for a long time for a country house that would fit the proportions of the rooms as a location”” explains Hughes-Jones, showing the Bridgerton house, divided into several sites (but each with the presence of a family shade of Wedgewood blue). You can get around them all in at least an hour, and you have to walk on tiptoe past the Featherington rooms, since filming is underway inside. “It makes everyone feel like they are in a real place. We made all the carpets, considering the size of the room, the color palette is also important. The paintings are either without copyright, or we paid for their use, and they are all from galleries. We wanted to make sure that the paintings would fit the Bridgertons, so the colors of the costumes in the paintings are the same as on the actors.” 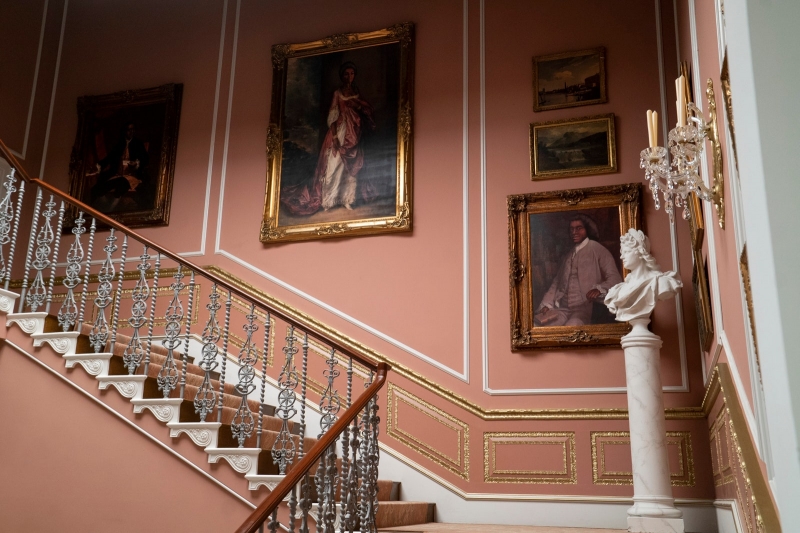 Hughes-Jones and his set designer Gina Cromwell were faced with the task of recreating several new film sets for the second season, including Lady Danbury’s secular house, a printing workshop and Aubrey Hall, the Bridgerton country estate. Traditionally, Lady Danbury received her signature shades: dusty pink and peach, with gold trim. ”We give it a very narrow color palette so that viewers immediately know what kind of world they are in,” Hughes—Jones notes. “Even flowers are very rich purples and pinks that we don’t use anywhere else.” 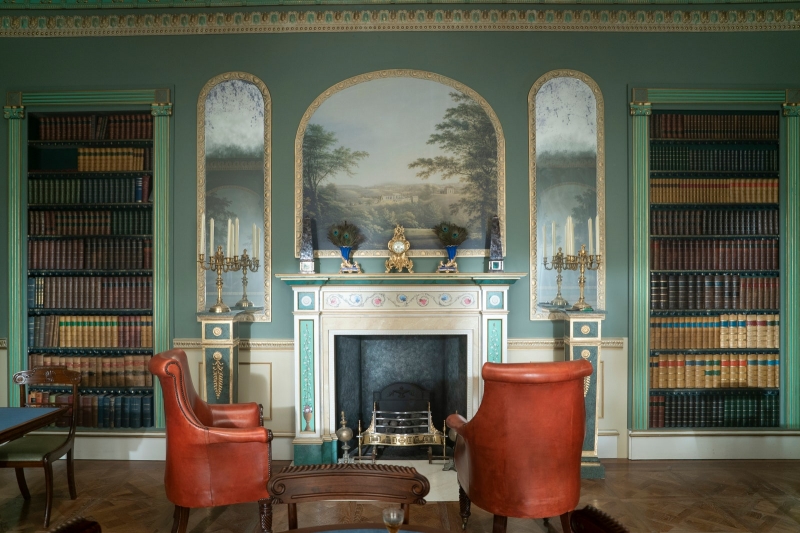 The top of the mirrors in Will’s club is “clouded” to create the illusion of completeness of the interior and prevent the camera from reflecting in the frame.

Another new venue is Will’s Gentlemen’s Club, which the boxer opened with funds received dishonestly last season. The team created the interior of the club, inspired by similar clubs of that era, such as Reform Club and White’s, but at the same time bringing a sense of Las Vegas style. The fireplaces are in working order, as are all the Bridgerton fireplaces, and the glassware was purchased from charity shops, eBay and flea markets. The pastoral paintings on the walls were painted to order by the Bridgerton painter Humphrey Banham. But the club, like the series as a whole, corresponds to the era, specifically hyperbolizing it.

For example, the gentlemen’s club historically did not have real bars, but according to the Bridgerton scenario, it was necessary. “We made something like a bar that’s not a bar,” says Hughes-Jones— “It works for the plot, but it’s not so far-fetched that anyone who would like to joke about the accuracy of the period could say, “Oh, this is completely wrong.” But it’s not quite right either””

He adds“ “The fact is that the Bridgertons are an imitation of the era. There are some things in the storylines that just don’t fit into the Regency world. We are storytellers, so we need to make it work for the narrative”” 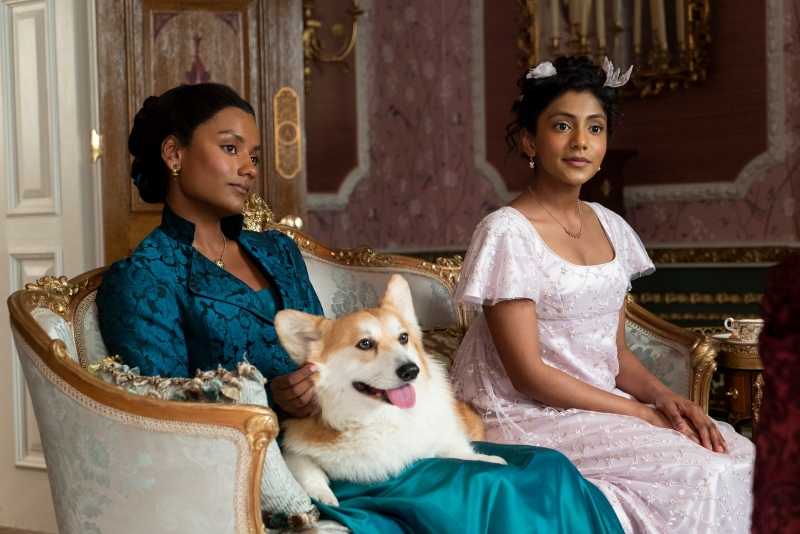 The Charm sisters reside at Lady Danbury’s house during their stay in London. Simon Ashley as Kate Sharma and Charitra Chandran as Edwina Sharma.

Although the scenery looks discouragingly realistic, the design team has a few clever tricks. The champagne buckets at Will’s club have artificial ice. The expensive-looking chinoiserie style that covers the walls of Lady Danbury’s dining room was painted by Banham and then printed. The cobbled street, which replaced several real places in the city of Bath in the second season, is made of rubber, so horses and carriages can easily drive past Modiste and Gunter’s Tea Shop. Hundreds of flowers are artificial, so that they do not have time to wilt. But there are also authentic things, for example, a massive Stanhope printing press borrowed from the Reading Museum collection to print Lady Whistledown’s letters. Today there are only two of them left in the world, and it weighs so much that it can only be installed on the site with the help of a forklift.

“The scenery sometimes needs to be given carelessness so that there is something to start from—” says Hughes-Jones about the importance of illustrating that time in a less idealized way. – Because if everything is brilliant, beautiful and bright, after a while it will get boring. Therefore, contrast is sometimes necessary to bring the viewer back to the understanding that this is actually a huge space””

Of course, the production designer knows that the Bridgerton audience is obsessed with the charm of the secular society of that time. So much so that since the premiere of the first season, there has been a noticeable demand for Regency-era items and decor. “It’s nice to know that the Regencycore style is alive, well and developing,” Hughes—Jones admits. — I know that the price of wisteria soared at auctions and eBay when the Bridgerton series appeared. It’s flattering, it’s nice that people took it the way it should have happened”” He gestures around the scenery: “Anyone who wants to can bring a piece of it into their home.”