Architects Natalia and Ivan Trofimovs, Blockstudio bureau, have transformed an apartment in the center of Moscow. The owner is a Frenchman in love with Russia, asked to make an interior in Russian style with authentic antique furniture and Parisian chic. 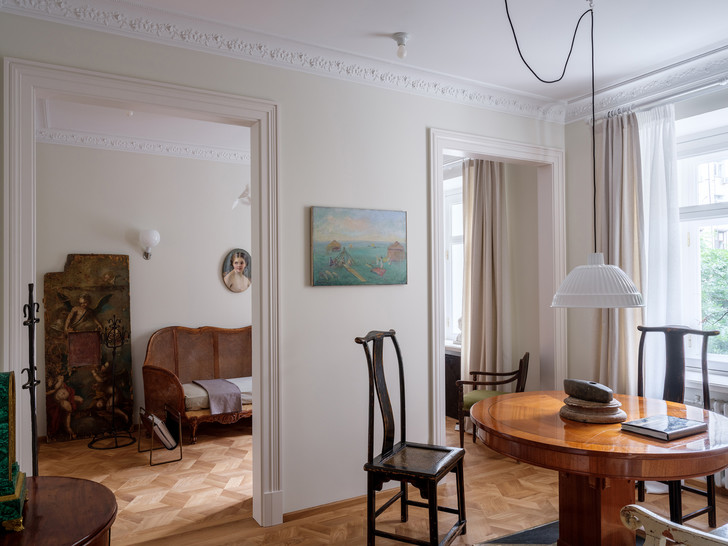 A pair of chairs, black lacquer, China, the end of the XIX century, antique gallery “Russian manor”. P.V. Kuznetsov’s painting “In the Kyrgyz steppe”, the first half of the XX century. Composite parquet made of oak, “Golden Forest”. Ceiling lamp from Zangra, suspended ceiling lamp from FontanaArte.

“We met Jan a long time ago, back in Paris—” say the authors of the project, architects Ivan and Natalia Trofimov from the Blockstudio studio. – Sitting in his apartment, which was the absolute embodiment of the “Parisian style— – in an old house with preserved signs of the Ottoman style, stucco and very modern interior items – Jan talked about his Russian roots and that he would like to live in Moscow. It seemed like a fairy tale at the time, but a few years later, Jan really moved to Moscow. He is a devout fan of it, his ancestors lived here before the revolution. And although the rental housing market cooled his ardor a little, our hero did not give up and bought his own apartment.” 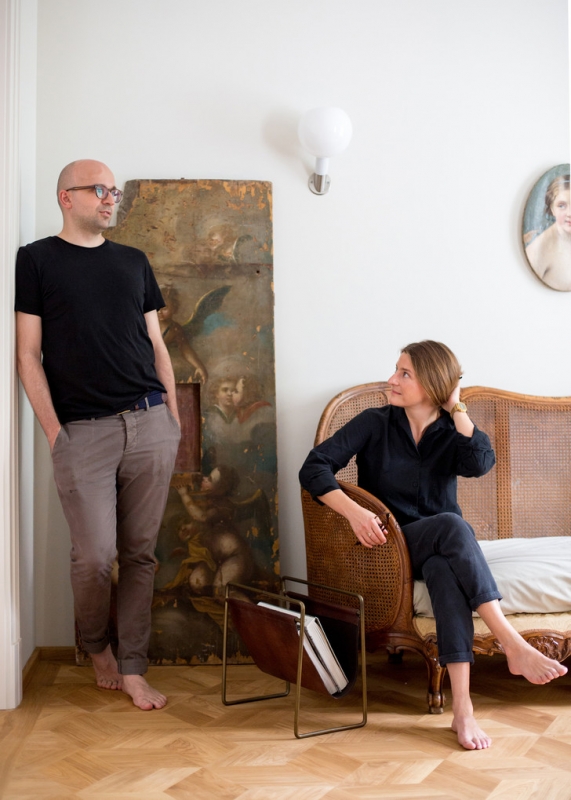 “The choice fell on the Pokrovka area, which was not accidentally chosen by expats. An old Moscow house with a view of a quiet courtyard and grandmothers feeding pigeons in the morning looked charming. Later, however, the picture was not so idyllic. In the struggle for the cleanliness of the windows, which was regularly violated by pigeons, Jan asked to equip the window tides with metal spikes – in the Parisian manner.” 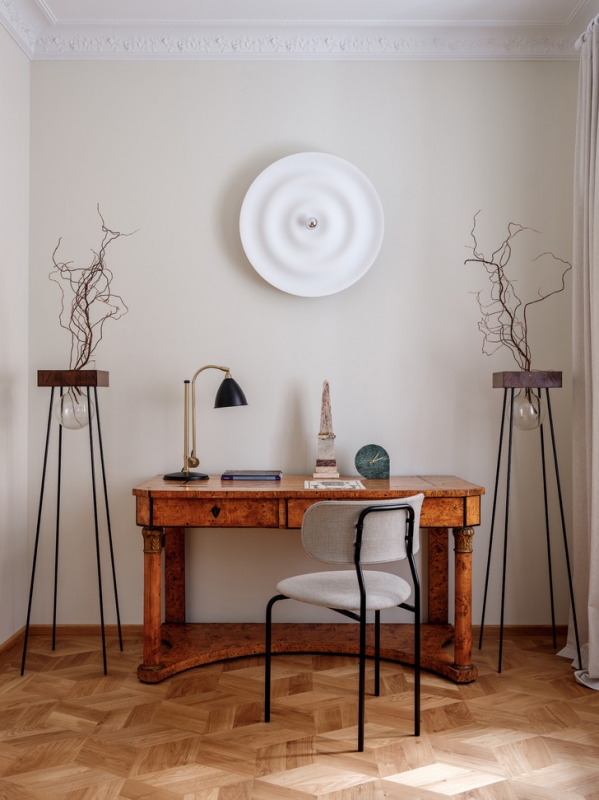 “The lamps were chosen modern. Antique light is rarely functional, and without proper lighting, life in an apartment can become unbearable” 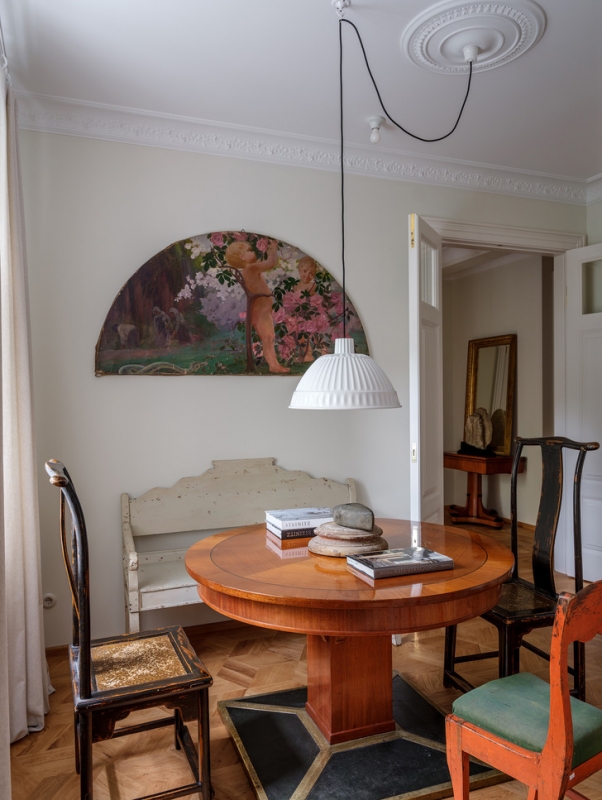 Table, mahogany, brass, leather, Russia, 1910s. On the table is a Neolithic axe, 2nd millennium BC. On the wall is a panel “Allegory of Paradise”, Europe, the beginning of the XX century. Bench, Russia, XIX century. All – antique gallery “Russian manor”.

“When asked how he wants to live here, Jan answered simply: “I want everything in the interior to remind me of the stories of great-grandmother Olga.” At that time, the apartment was renovated in the Italian style as it was understood by the residents of Moscow in the early 90s. No signs of the house built in the 80s of the XIX century have been preserved at all, except for the old parquet found under several layers of new floors.” 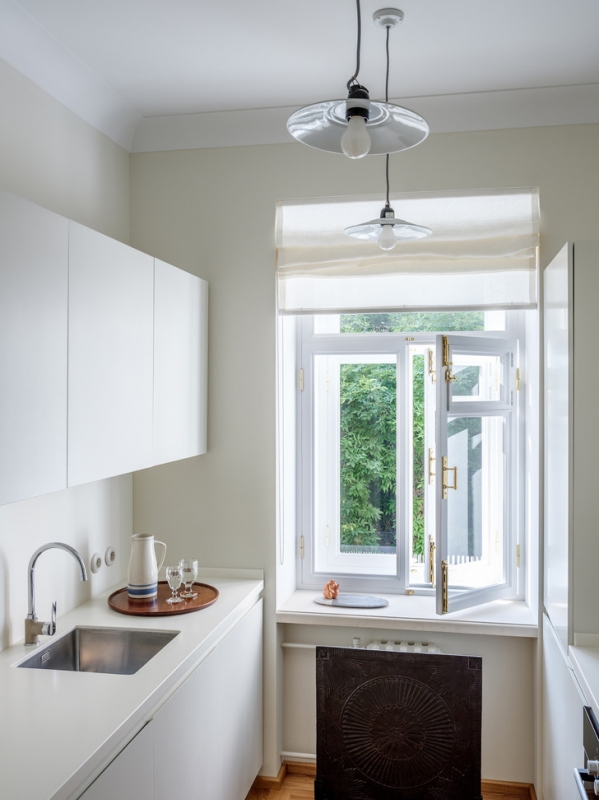 The kitchen is made to order, Ex-drev.su . Hanging lamps, Zangra. All windows and doors have antique brass handles found at flea markets.

“We have returned double wooden windows, because light is refracted through them in a very special way” 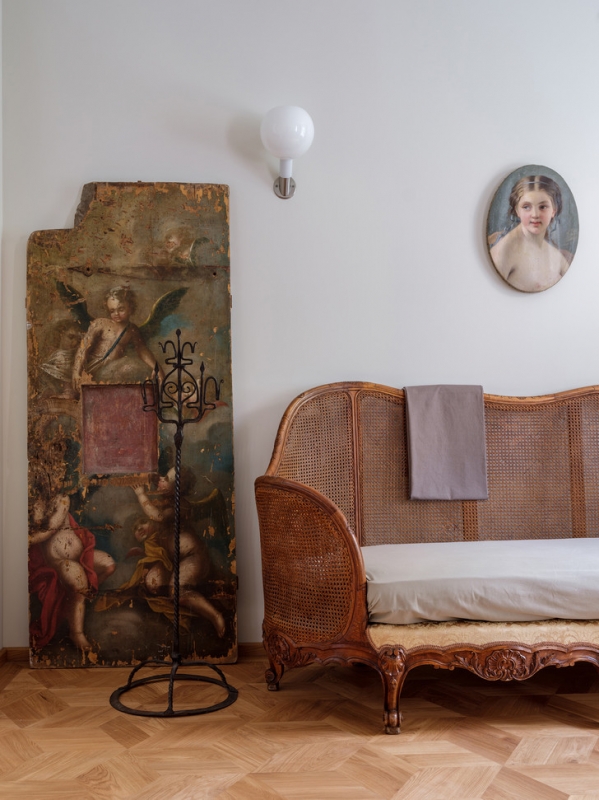 “Despite the compact size of the apartment (80 m2), we managed to accommodate everything that the customer wanted. Having already made the layout, we found archival drawings of the house. And they were stunned! Without realizing it, we have restored historical justice. An isolated kitchen, a dining room separated from the living room, an office, a bedroom and even a bathroom with a window — all this was here once before. And it was as if it was waiting in the wings to return.” 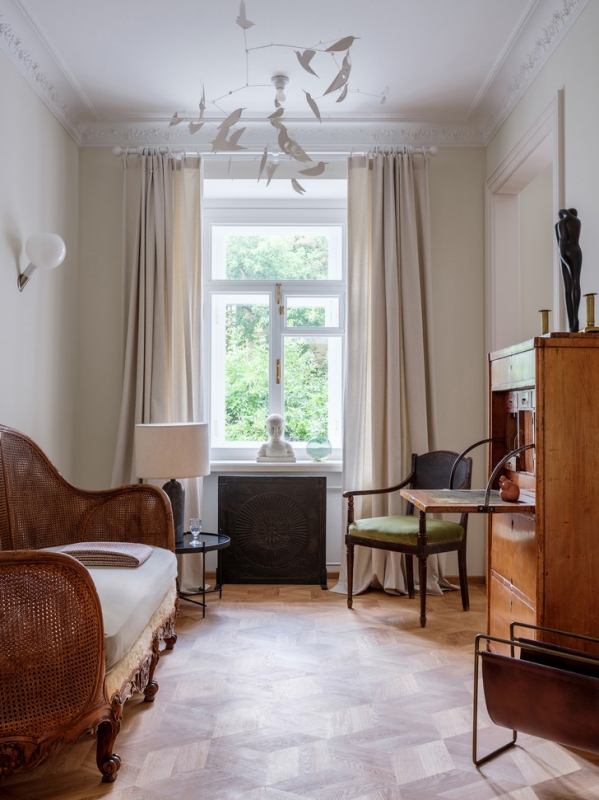 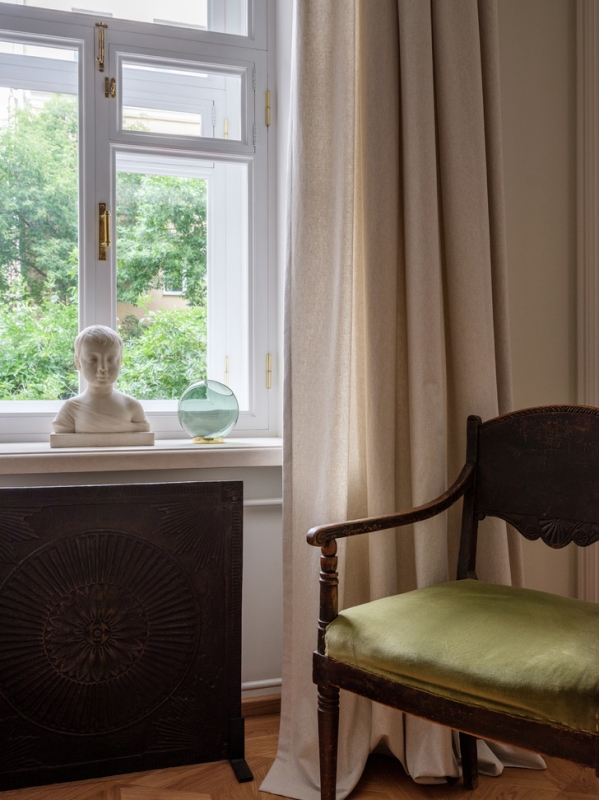 “We restored the drawing of the old parquet, allowed ourselves a slight liberty in the drawing of the plaster cornice – a tribute to the great-grandmother of the hero. The drawing of the doors is taken from the original doors of the turn of the XIX-XX centuries. Of course, this is an interpretation that does not pretend to be a restoration, just an image. And, of course, they returned double wooden windows, because light is refracted through them in a very special way.”

The photo “before repair” is especially impressive!

“As for the interior items, the process of selecting them was very exciting. We immediately decided that everything in the apartment should not be antique, it is not a museum. First of all, the antique light is shallowed — it is rarely functional, and without proper lighting, life in an apartment can become unbearable. Therefore, the lamps were chosen modern.” 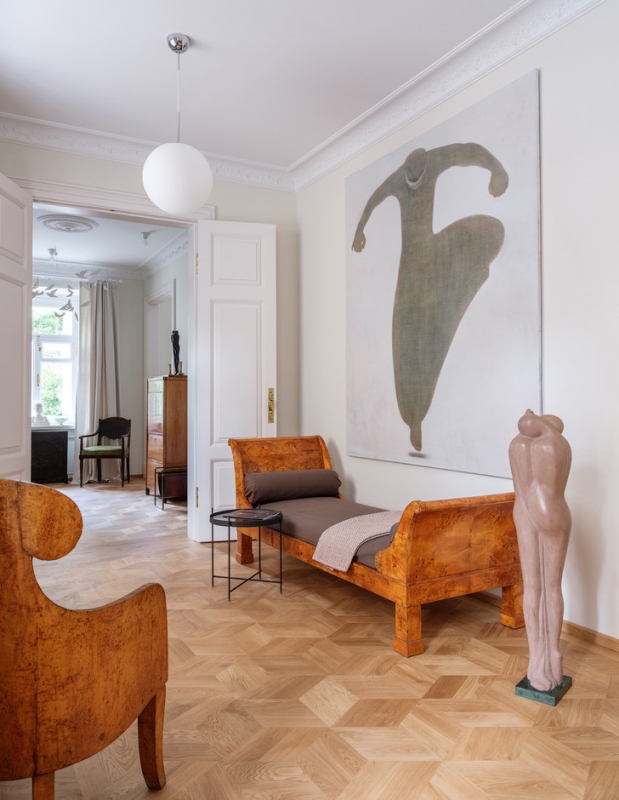 “But with furniture, I just wanted to avoid modern design. The customer likes things made at a high craft level. We did not have the task to assemble furniture from one particular era in the interior, especially since, being a real Frenchman, Jan does not tolerate the concept of “headsets”. The defining criterion was the concept of “impression”. Impressionism of a kind, only in the decor. A kind of eclecticism that is so close to the European man.” 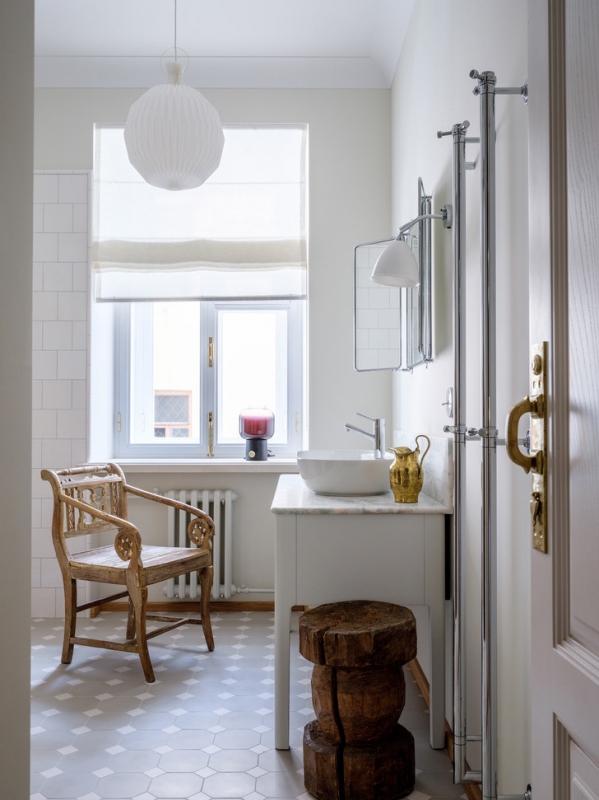 “We didn’t have a task to assemble furniture from one particular era in the interior. Jan is a real Frenchman, and therefore does not tolerate the concept of “headset” 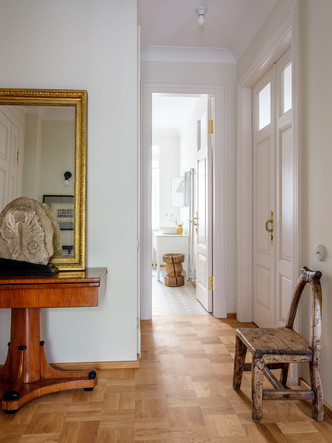 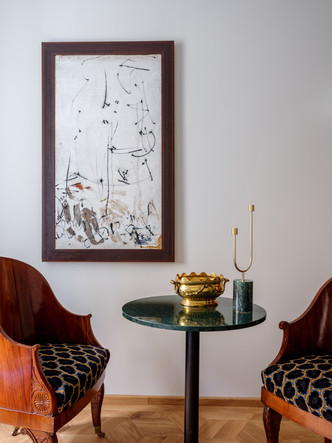 “During his life in Moscow, Jan collected a certain number of art objects based on his own taste. However, many things were selected directly for the interior. Thus, both art and furniture turned out to be from completely different eras, they just found their place. One of the important finds was a painting by Dyudi Sarabyanov hanging in the study. We agreed in unison that without it, antique furniture would dominate the space. Which, even considering all her beauty, would not be quite right.” www.blockstudio.ru, @_blockstudio_ 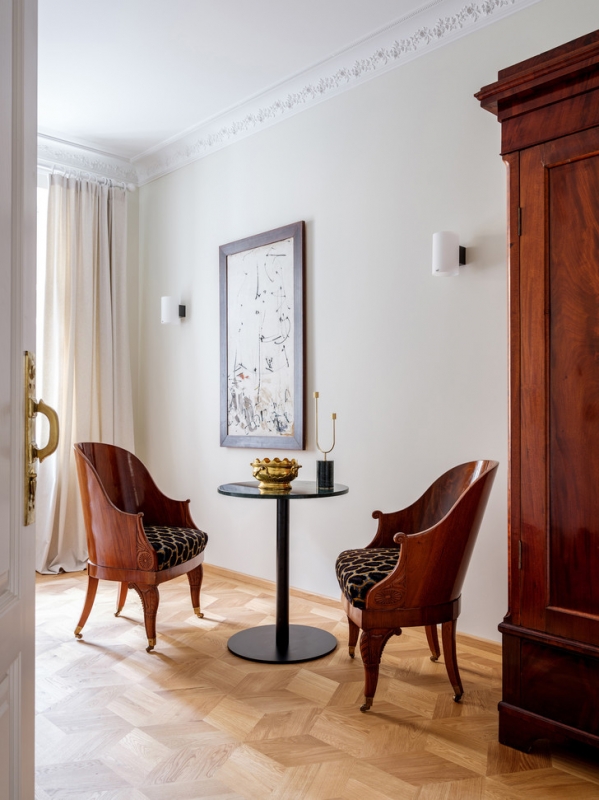