For his second home, French decorator Jean-Louis Deneau chose a house in the luxurious American resort of the Hamptons. It is a pleasure to create the atmosphere of a family nest here 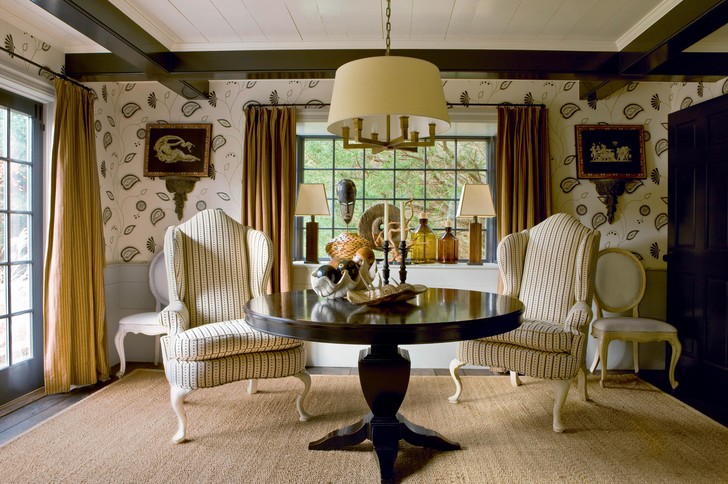 Canteen. The mahogany table, Mecox Gardens, is surrounded by deep English armchairs. A little further away — chairs of the XVIII century. On the wall there are console shelves with Italian paintings of the early XIX century. Deno widened the window opening and displayed vintage bottles and table lamps from the 1930s. Wallpaper, Au fil des Couleurs. Linen curtains, Rubelli.

The name of the decorator Jean-Louis Deniot is known far beyond the borders of his native France. He designs interiors in Paris, New York, Chicago, Dubai, Vienna and many other places around the globe. Of all styles, Deno prefers eclecticism and neoclassicism. “I don’t like dry modern interiors,” he says, “there is no soul in them. I’m much closer to the 1930s, 1940s, 1950s, 1960s. Designing furniture, I am inspired by the works of Jean-Michel Frank. Naturally, we are not talking about verbatim quoting, but about a sense of proportion, noble materials and elegant lines. Only I choose more modern colors.” 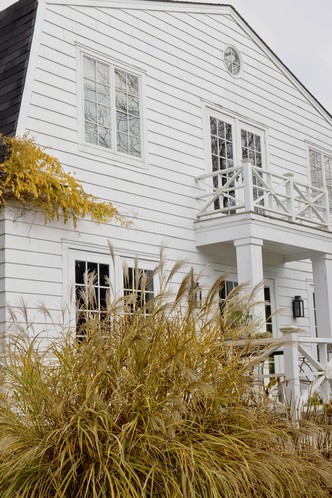 The facade was transformed by a painted shingle paneling. 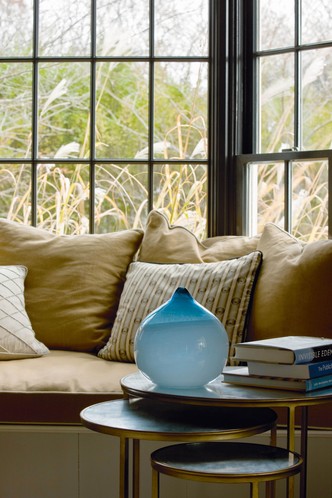 A fragment of the living room. There is a sofa in place of the window sill in the bay window. Linen upholstery, Jim Thompson. Pillows, Jean-François Lesage.

“In order to age the interior, some of the details were painted black, and wallpaper was found for the living room in the taste of my grandmother” 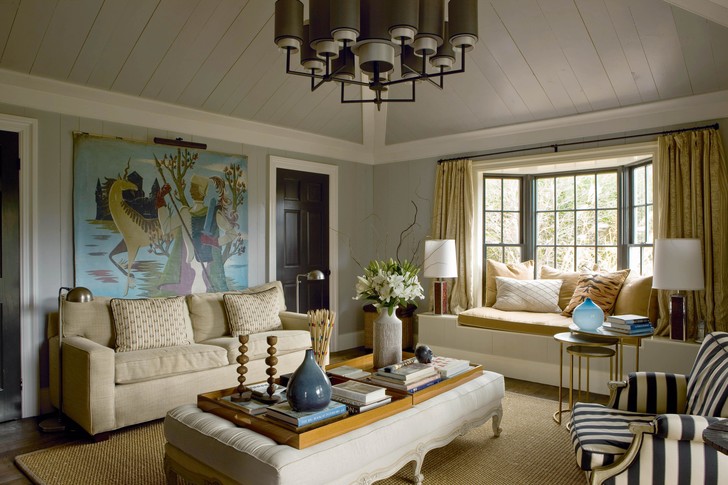 Deno’s own houses are located in Paris and the Hamptons, which will be discussed. Deno transformed the building, which is quite typical for these places, with the help of white shingle sheathing. “There is nothing better than wood for finishing a country house,” says the owner. “I love this material and, although it tends to triple estimates and stretch deadlines, I use it everywhere.”

“People look at the ceiling more often than they think. It will be good if there is something interesting there.”

There is also enough wood in the interiors. Panels are made of it, with which the walls and ceilings of the rooms are sheathed. Jean-Louis painted them in soft earthy tones. Deno never uses pure white, preferring warmer shades of parchment or ivory. The decorator pays special attention to the decoration of ceilings. The decorator painted the ceiling beams in the dining room black. As well as kitchen cabinets made according to his sketches. Thanks to the inclusions of black, according to Deno, a touch of antiquity appears in the interior. 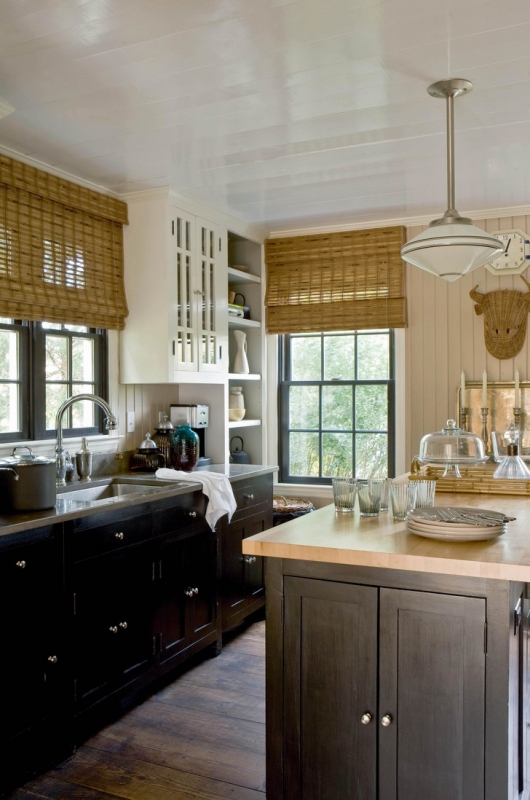 Kitchen. The furniture is made according to the owner’s project. The ceiling and walls are covered with boards, the finish is paints from Benjamin Moore. Scandinavian vases of the 1960s were painted white by the decorator so that they fit better into the interior.

“I wanted my new home to be like a family nest, in which each generation has left something of its own,” says Jean-Louis. — For the decoration of the dining room, I chose wallpaper with floral ornaments in retro style. These could have been bought by my grandmother in the 1960s. Then I expanded the window opening, and placed vintage accessories against the background of glass.” Their Day is selected with special care.

He is even more scrupulous about comfort issues, invariably preferring deep English armchairs and soft “enveloping” sofas. However, the main character of any interior decorator considers light. “He can fix everything or, on the contrary, destroy it. Ideally, there should be at least eight lighting sources in each room,” Jean—Louis shares his professional secrets. In the living room, he advises organizing several independent seating areas: “It’s good when everyone has a corner to do their own thing — read, reflect, take a nap.” 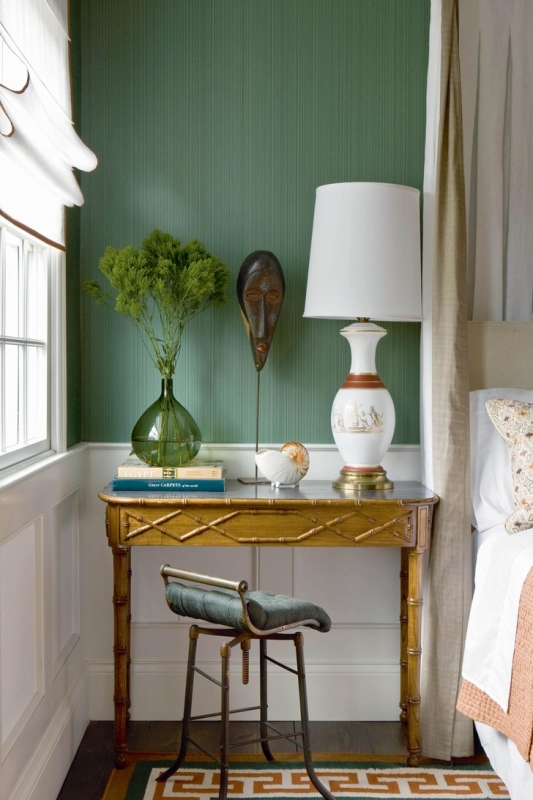 Guest room. On a bamboo table there is a lamp in the style of Napoleon III. Brass piano chair, vintage.

Another favorite technique of the Day is the contrast of luxurious and modest materials. The upholstery of noble velvet and silk in one of the guest rooms is designed to emphasize the deliberate simplicity of the painted wood finish.

Jean-Louis decorated the second guest room in copper-red and swamp-green tones: “These colors are borrowed from the pattern on the cotton carpet that we brought from India. I like their slightly naive and unexpected combination. And what I don’t like is overly pretentious things. Their owners often behave too seriously. It’s just ridiculous! Don’t you think so?” www.deniot.com “Wood is the best material for finishing a house, even if the estimate will grow three times!” 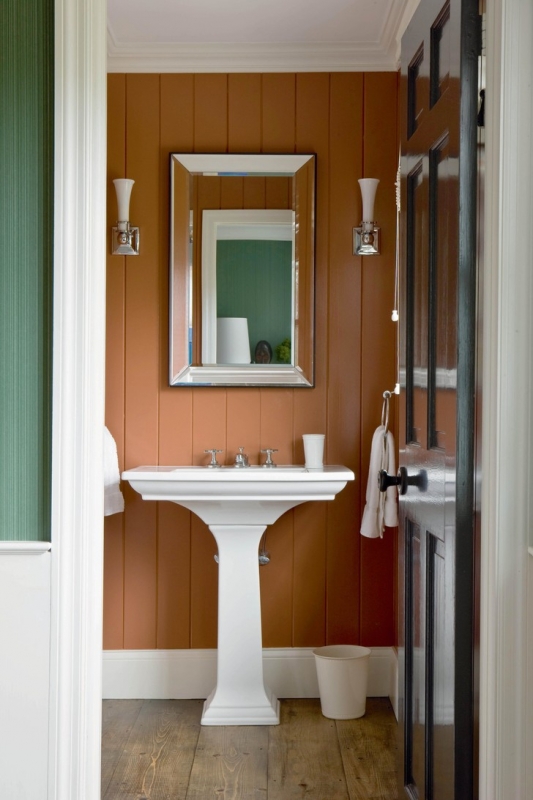 “Wood is the best material for finishing a house, even if the estimate will grow three times!” 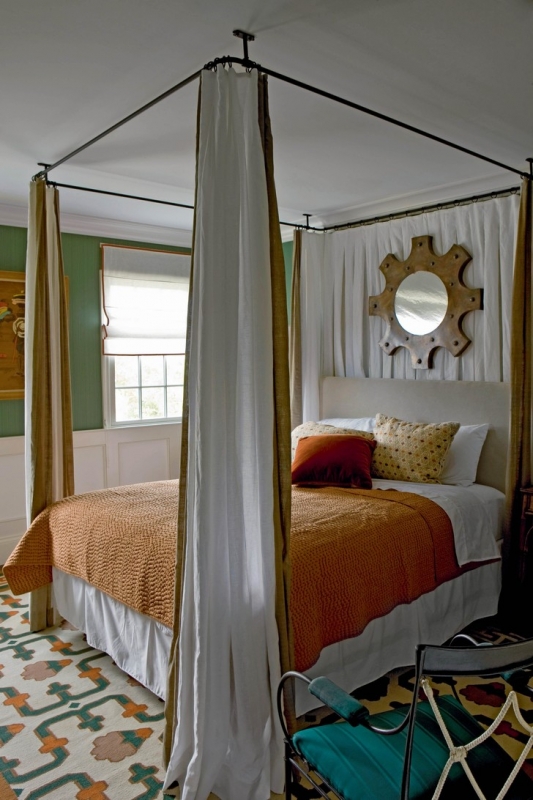