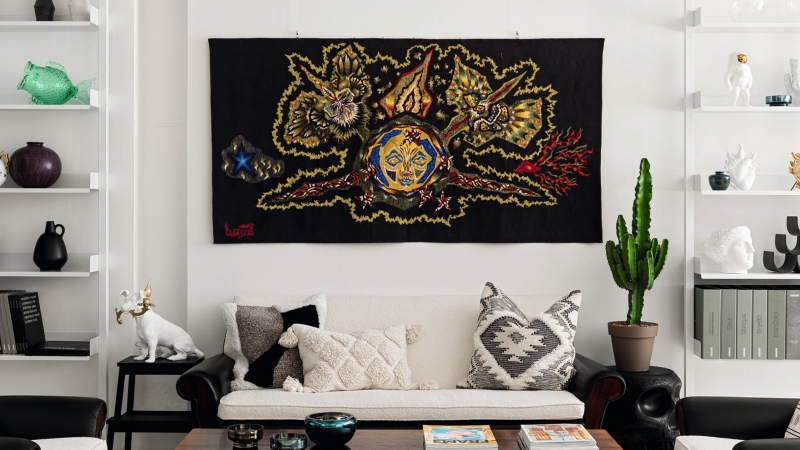 Lounge area. On the wall is a tapestry by Jean Lurse Vivace, it was created in the workshop of Simone Andre in 1960; sofa, armchairs and table are vintage; pillows and carpet, H&M Home; shelves are made to order, @experimental_factory; lamp, Macrolux; black dog, Qeeboo; white dog, Seletti; vases AN&ANGEL. Photo: Sergey Krasyuk; stylist: Natalia Onufreychuk

The word “tapestry” suddenly began to pop up in the information field: it will become known that the canvas from Atelier J. de la Baume-Durrbach with Pablo Picasso’s “Guernica” will be returned to the UN headquarters in New York, then photographs of Bella Hadid’s bow in a colorful tapestry coat will flood the Internet pages of fashion magazines. Pictures with tapestries are not bypassed by AD: projects are often sent to the editorial office in which the walls are decorated not only with familiar paintings, but also guess what.

This has its own pattern: one of the main and enduring global trends, including in design, is environmental friendliness. The overseas words “redesign”, “recycling”, “upcycling”, “downcycle”, “reuse” and others come down to one thing – the rejection of excessive consumption and reuse. For the same reason, a dowry in the form of tapestries is returned from old grandmother’s chests. So we suggest today to dive into this (as we could already prove) trend and speculate why it is popular again. 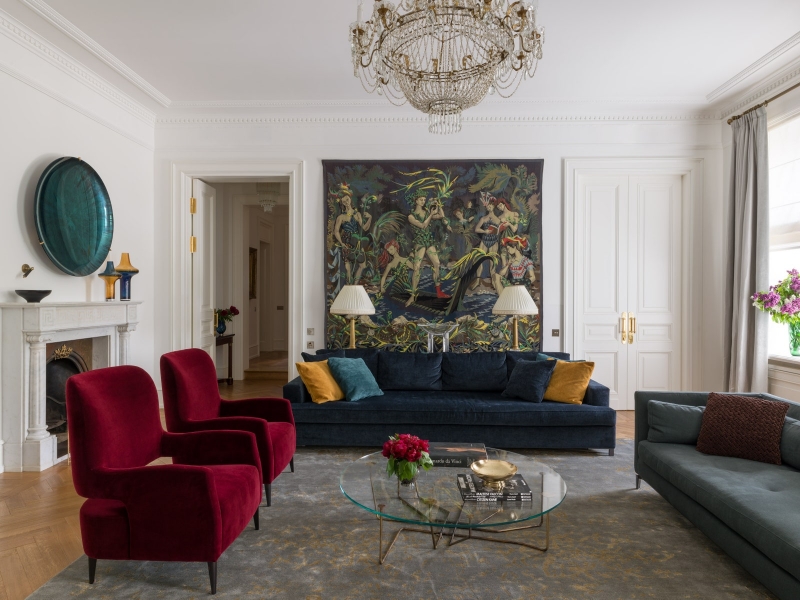 The apartment is designed by the bureau “Akant”. Living room. The sofa is made according to the sketches of the owners. Chairs, Rubelli. Coffee table, Gallotti & Radice. Couch, Minotti. The tapestry, woven in 1942 according to the sketches of Lucien Couteau, was bought by the hostess together with the decorator Elena Weinstein in Paris. The fireplace has been preserved since the construction of the house. There is no built-in light in residential premises for fundamental reasons: a hundred years ago, when the house was being built, there was no such thing. Doors and other joinery are made by Stanislav Efremov.

What is a tapestry

A tapestry is a woven painting, it is also often called a “tapestry”. At the same time, the second option is considered more literate for use, although less common, since the French gobelin is just the surname of Flemish master weavers who lived in the Faubourg Saint-Marcel district of Paris in the middle of the XII century. Then the word “tapestry” came into use precisely to distinguish French-made tapestries from canvases from other European and Asian countries, although the history of woven paintings goes back centuries and is intertwined with the history of ancient countries – from Japan to Peru.

The main feature of the tapestry that distinguishes it from the usual carpets from the Soviet past is the absence of pile. Another, no less significant sign is the price: tapestries are quite expensive, and not only because the work is done manually, but also because historically the canvases are made of natural wool, silk, threads with gold and silver inserts. 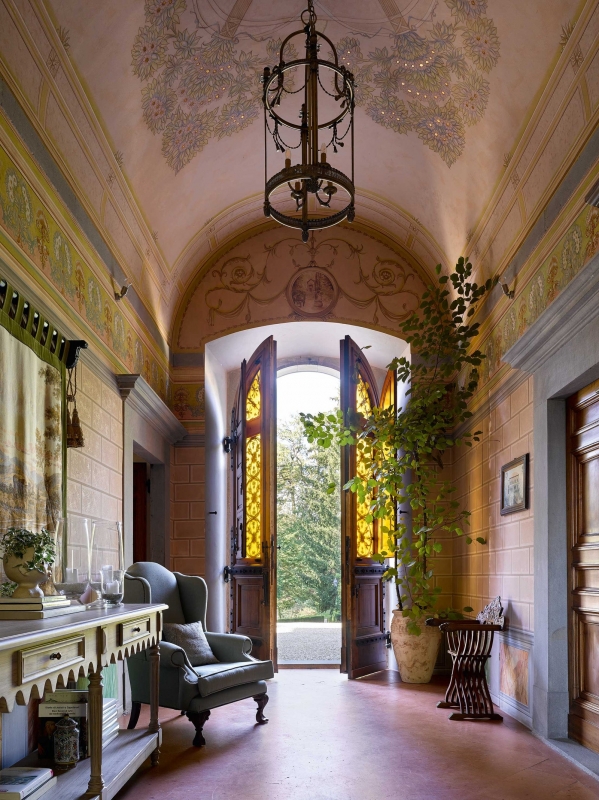 Interior from the cover: villa designed by Natalia Pantyukhina. Entrance area. Console, armchair and chandelier, Guadarte; antique tapestry above the console; antique chair on the right. The walls and ceiling were painted by the artist Stefan Zarkov.

“Woven painting” is quite a fair name for tapestries. Canvases always have a clear composition, whether they are modern copies with a reference to the avant-garde or traditional works with ornate ornaments. The latter, by the way, can be embroidered in whole series with thematic plots, most often biblical or antique.

What is the tapestry now

Since the tapestry can be considered a full-fledged work of art, the images on it now can also reflect modern trends and trends. Therefore, as in the past, now tapestries are chosen according to the principle of combination with the style of the interior. And depending on this, the canvases perform different functions (besides, of course, the main one – to serve as a decoration of the space).

References to the past

It is believed that tapestries in the form in which we know them now appeared on the territory of Europe in the era of the Crusades. Hence the associations with knights and medieval castles. Naturally, you should not get carried away with imitation, otherwise the residential interior risks turning into decorations. But it is possible to support the tapestry with several interesting details — couches with overlapping upholstery or long curtains in one of the tones of the canvas. 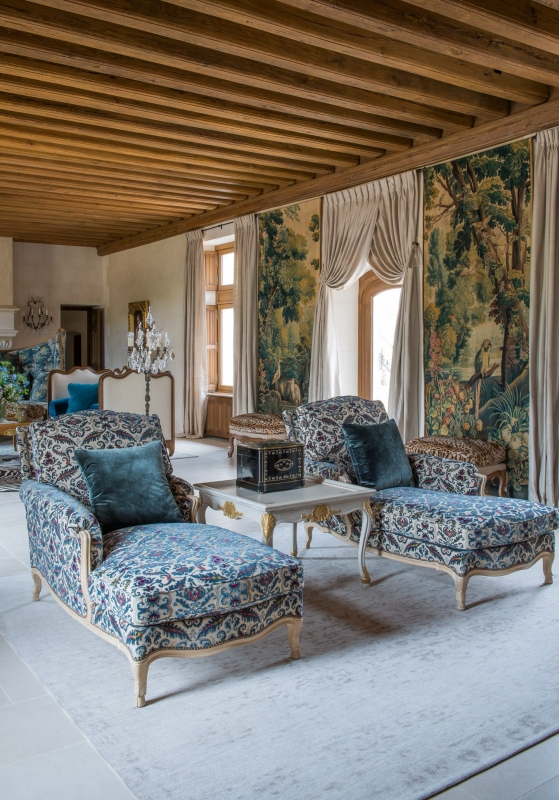 A castle in France designed by Olga Zubova. Ladies’ salon. The tapestries were found in one of the Paris galleries. Couches of the Collection Pierre factory are upholstered in Edmond Petit fabric. Curtains Fabergé, Art & Decor. Coffee table, Taillardat. Sofas in the background, Moissonier. 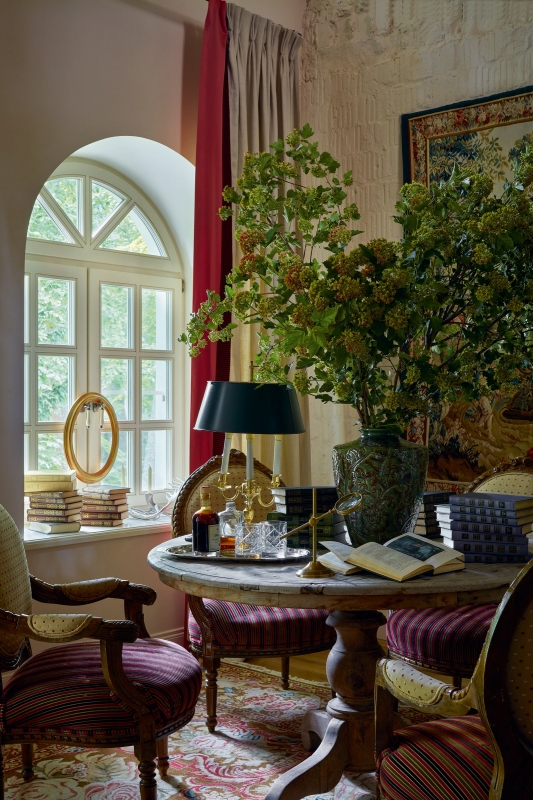 A house in the Moscow region designed by Natalia Popova. A fragment of the library. On the wall is a French tapestry “Diana and the Hunter”. Curtains are sewn from linen, Casamance. 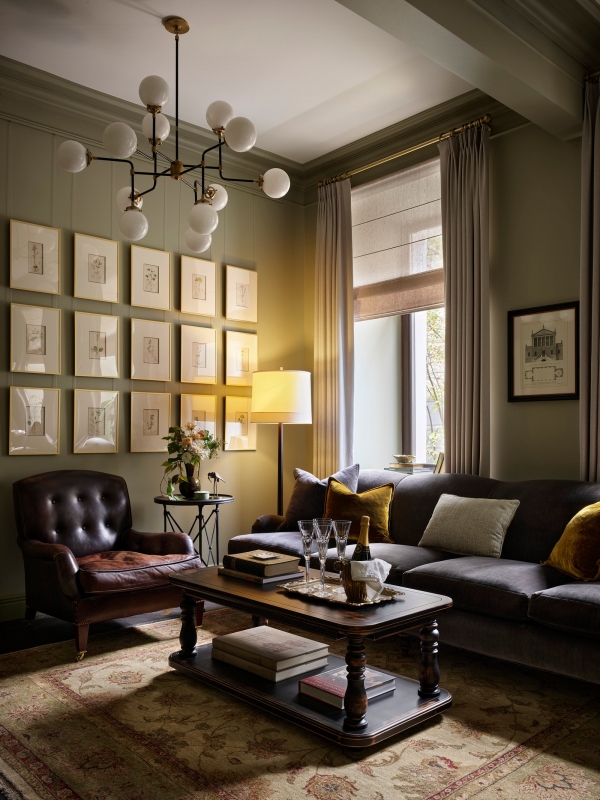 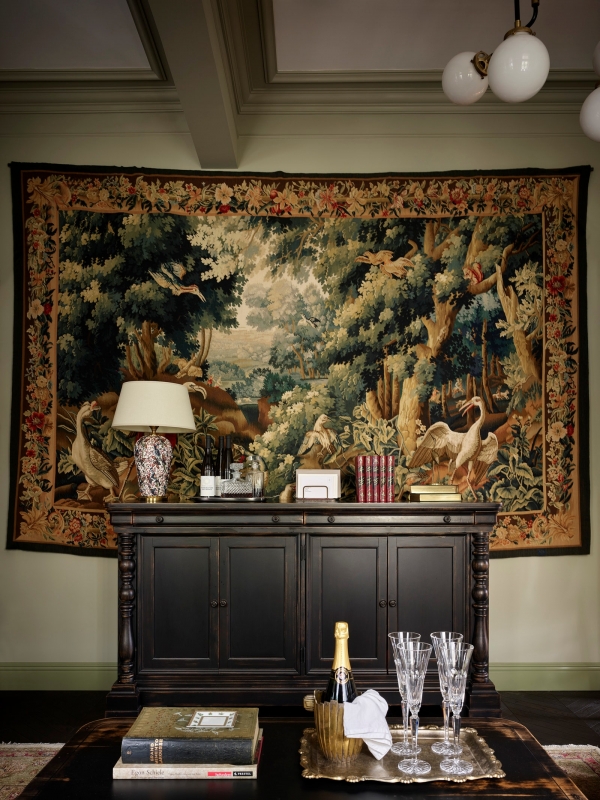 Apartment in a former apartment building in Moscow, 50 m2. Living room. The coffee table is made to order in the workshop “NVS”; glasses from the “Workshop of Katya Gerdt”; a bucket for champagne, Redecoration Store; chest of drawers, Schnadig; on it a vintage lamp from the Redecoration Store; carpet and tapestry, MarkPatlisStudio.

A slightly more exotic option is in the project of Olga Sedova and Prokhor Mashukov: the wall at the head of the bed is not just decorated with wallpaper, but covered with fabric with similar ornate patterns. 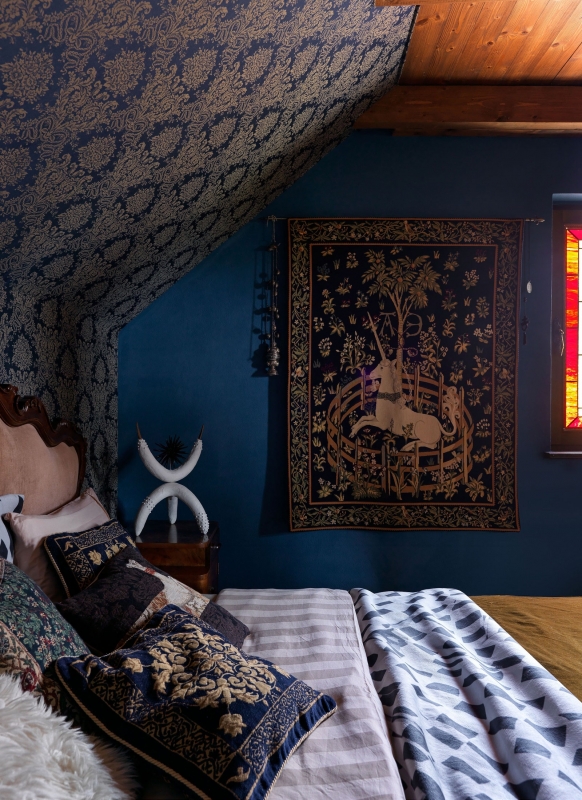 A house for an artist based on the Only Design project in Slovenia. A fragment of the bedroom. On the wall, a tapestry brought from Rome is a modern copy of a Renaissance work. On the pedestal is a ceramic author’s lamp by Nikolai Mashukov. The stained glass window was made by his son Roman.

The spirit of vintage

Tapestries with more “picturesque” subjects rather resemble familiar paintings, but without heavy frames they look more modern and lighter. So, architect Elena Nikitina chose a tapestry with naive bright colors for an apartment in an apartment building built in 1914. Some of the historical details were preserved, some were recreated, and such a tapestry in the style of the late middle of the last century gave the interior freshness, without getting out of the general context. 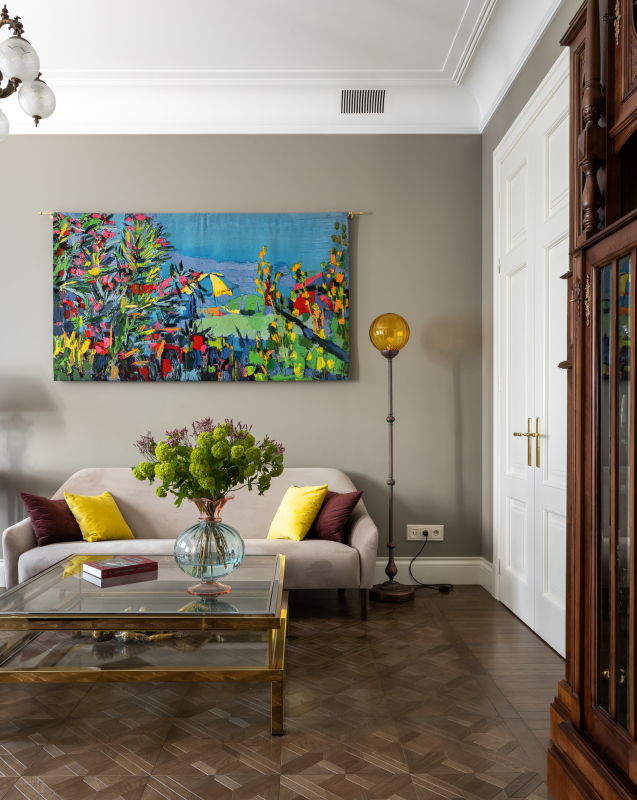 Apartment on the Old Arbat, 108 m2. A fragment of the living room. Interior doors and skirting board are made at the carpentry production Design Studio Parquet; modular oak parquet, “Shender Decor” on the floor; paint on the walls, Little Greene; tapestry 1971 bought in Midcentury 50_80.

And Mia Karlova recreated in her country house the atmosphere of childhood at her grandparents’ dacha. Therefore, the tapestry in the decorator’s bedroom is not at all typical for the Middle Ages: the image in the spirit of Cubism supports the retrostylistics of the XX century. 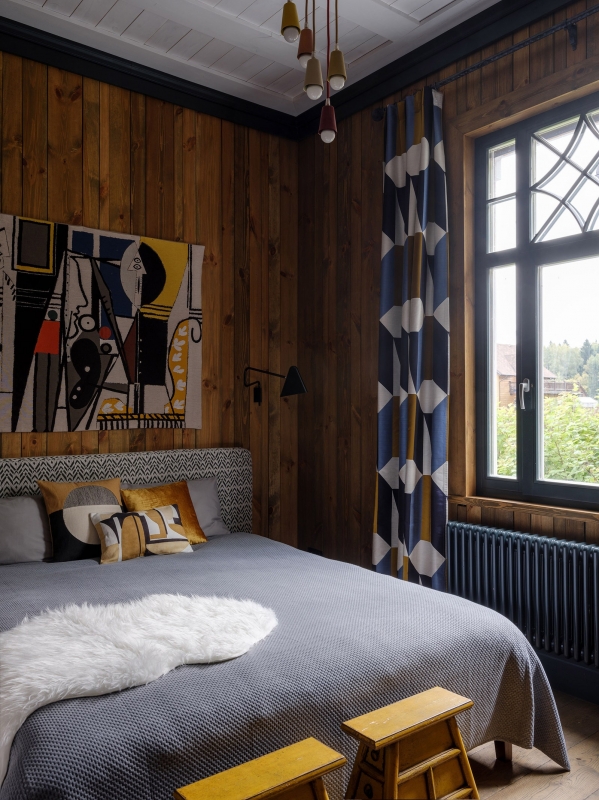 The house of decorator Mia Karlova in the Moscow region. Bedroom. The headboard of the bed is covered with fabric, Gastón y Daniela; fabric curtains, Métaphores; on the wall is a tapestry woven at the French manufactory Jules Pansu; decorative pillows, The Conran Shop.

Recreating a vintage setting turned out to be quite a popular idea, so we find the same tapestry in two different projects: in the interior designed by Maria Naryshkina and Olga Ryukina from Numi Design studio and in the house of Anna Zinkovskaya. Despite the fact that the spaces are completely different (you can see this by clicking on the link under the photo), the canvases fit equally successfully into the style of the rooms. 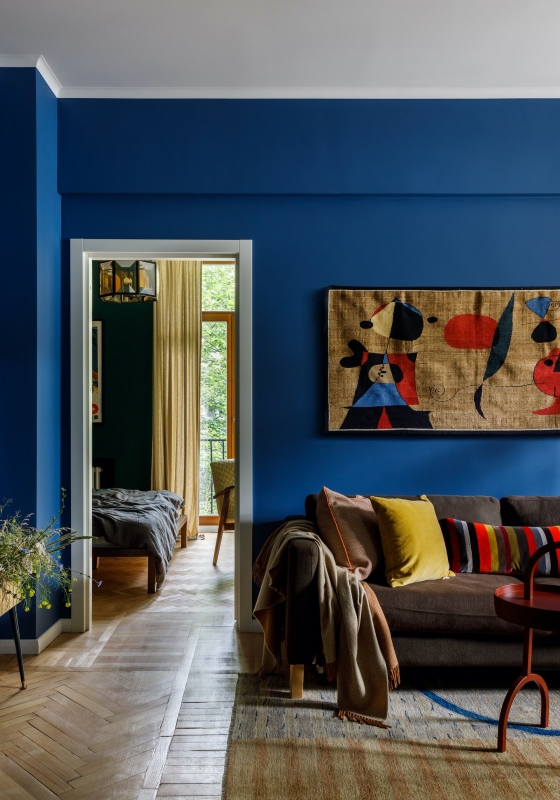 Apartment with a history in Moscow, 64 m2. View from the living room to the bedroom. Sofa, IKEA; pillows, Leitner (Empire Design), Designers Guild (Manders). The wine-colored coffee table (by Alexander Kanygin) was bought at the Palaty Store gallery. Vintage tapestry on the wall based on sketches by Joan Miro and carpet, MarkPatlisStudio. 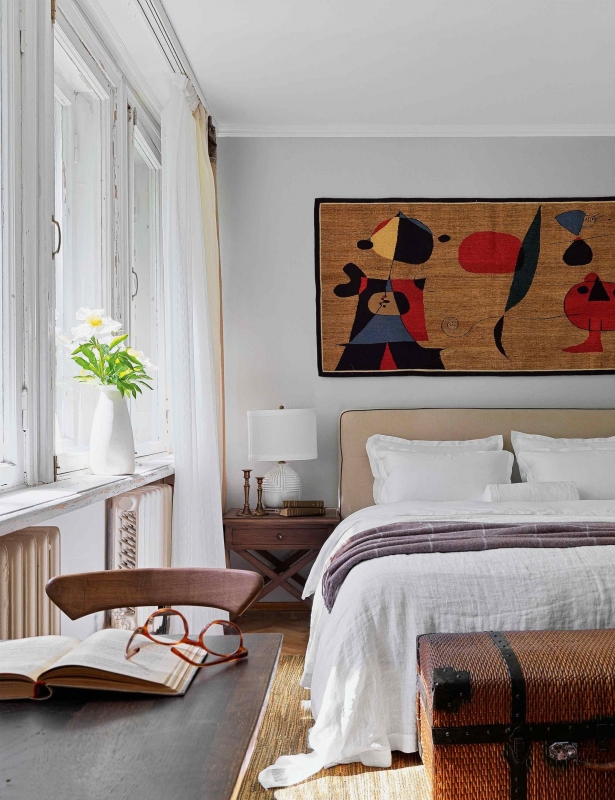 One of the connoisseurs of tapestries among Russian designers is Timofey Veresnovsky. In his projects, he combines woven canvases with modern examples of collectible design, furniture made of recycled plastic and items from the mass market. But please note that all parts of the interior are connected to each other: shades or elements from the tapestry can be found in other details. 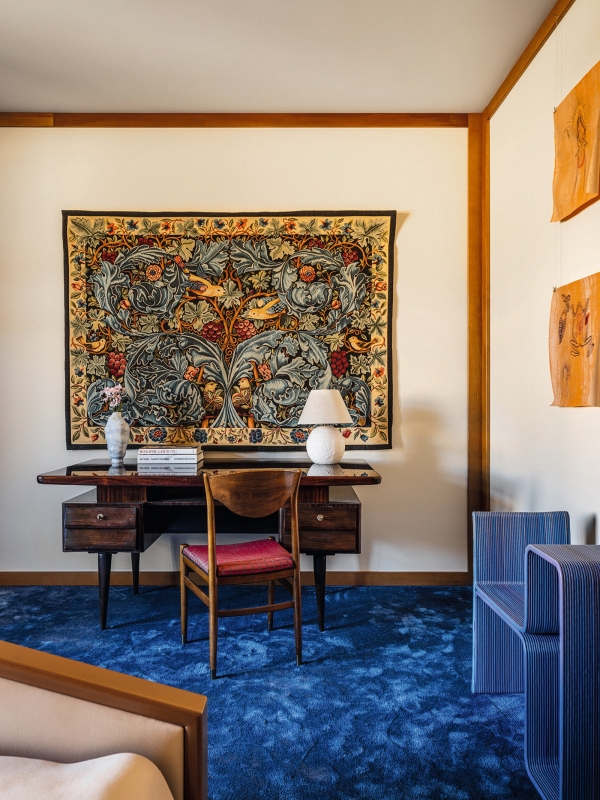 Apartment with elements of Russian style designed by Timofey Veresnovsky, 150 m2. Guest bedroom. Italian bureau and chair of the 1960s, Correct Form Gallery; modern tapestry based on sketches by William Morris; bench made of recycled plastic, 99recycle; table lamp, Zara Home. On the wall on the right is the work of Anna Afonina from Myth Gallery. 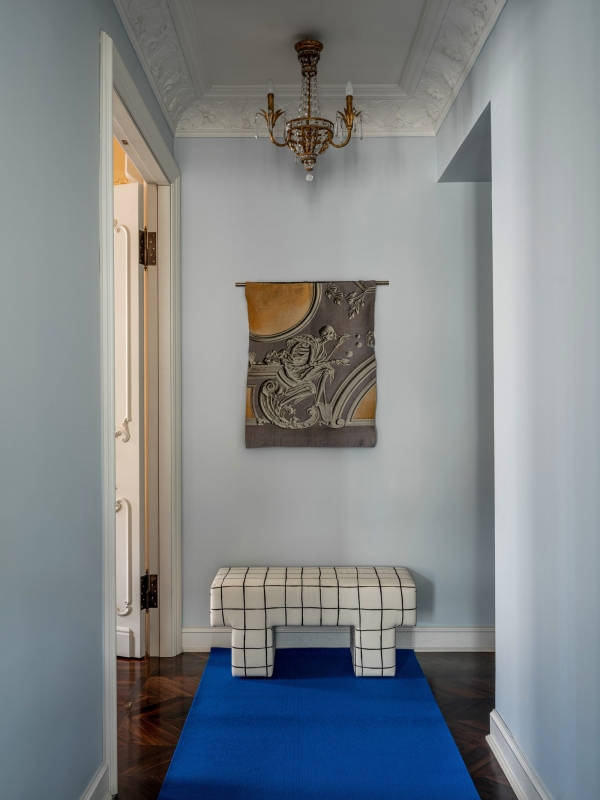 Apartment in St. Petersburg designed by Timofey Veresnovsky. Hallway. The banquette is made to order and upholstered in fabric, Kelly Wearstler; tapestry by artist Jenda Fluid.

In addition, tapestry is one of the ways to dilute the interior with atypical objects of art. This is what Nadezhda and Georgy Ananyev did, having decorated an apartment for their student and filling the rooms with unusual tapestries. In addition to the canvas designed by Marta Bagante, which greets guests at the entrance, the apartment also has a tapestry by French artist Jean-Louis Viard in the bedroom at the head of the bed. 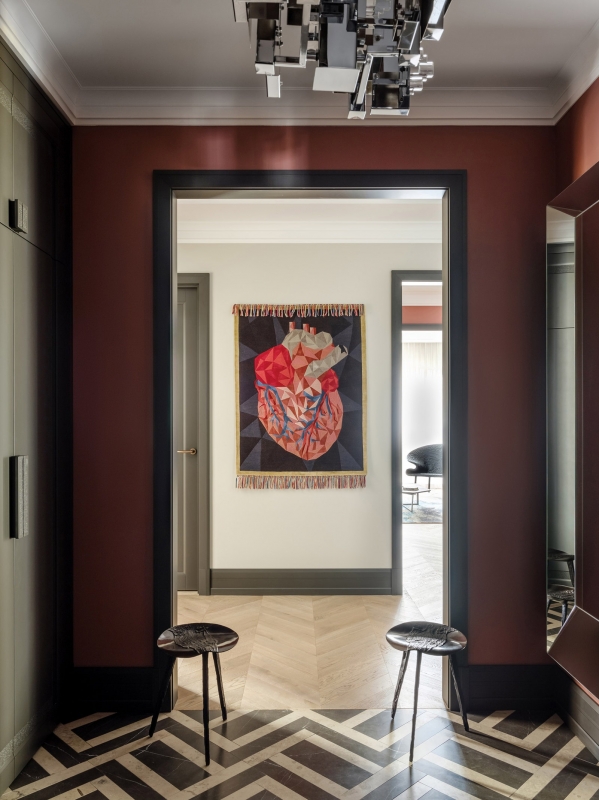 An apartment with art in Moscow designed by Nadezhda and Georgy Ananyev. Hallway. Marble floor and built-in wardrobe are made according to sketches by Georgy Ananyev; vintage bronze stools from NG Gallery; Evolution on the Dancefloor tapestry designed by Marta Bagante, cc-tapis; mirror, Glasitalia.

Tapestry is also found in public spaces. So, Elena Drobotova opened a space in Moscow that simultaneously performs the functions of a gallery, an office, and an alternative to a home living room. Therefore, a tapestry appeared on one of the walls – such a woven wall decor softens the interior with high ceilings and open communications. 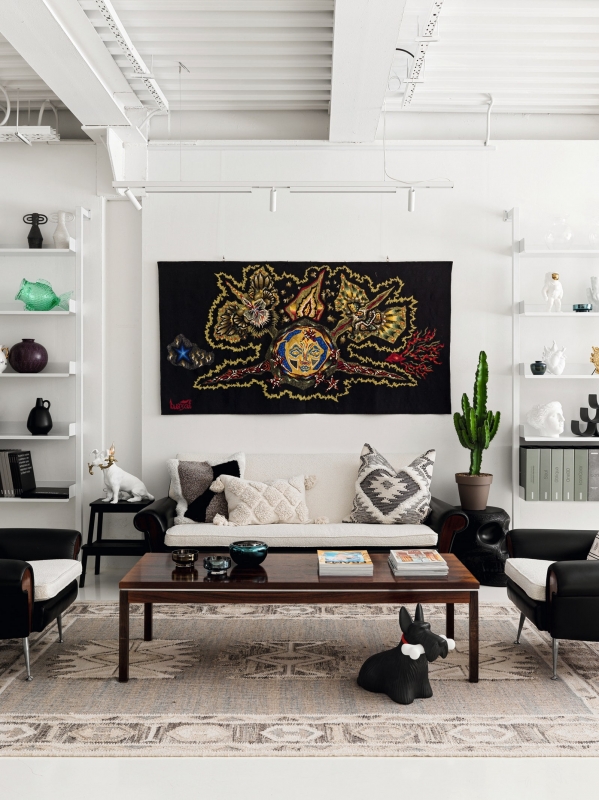 Elena Drobotova’s office gallery. Lounge area. On the wall is a tapestry by Jean Lurse Vivace, it was created in the workshop of Simone Andre in 1960; sofa, armchairs and table are vintage; pillows and carpet, H&M Home; shelves are made to order, @experimental_factory; lamp, Macrolux; black dog, Qeeboo; white dog, Seletti; vases, An & Angel.

How to be on trend, where to look for tapestries and who to follow

Evgeny Shutko’s atelier is a modern space where you can not only order a carpet or a tapestry, but also look at rare woven works and other art objects thematically related to them, as in a gallery. So, now there is an exhibition of sculptures by Helene Arfi (Hélène Arfi, France) and Isabelle Thiltges (Isabelle Thiltgès, Belgium). Through their works, artists express their admiration for the world – wild, sometimes incomprehensible, animals. In total, about twenty sculptures are presented in the gallery, which are neatly woven into the collection of tapestries and carpets by Atelier Choutko.

Also, in the projects of designers, it is often possible to see the canvases of the decorative atelier of Mark Patlis – MarkPatlisStudio (photos of the works can be found above). And some of the designers are fond of weaving themselves — this is how unusual and bright works appear (for example, tapestries from RUDA Studio). 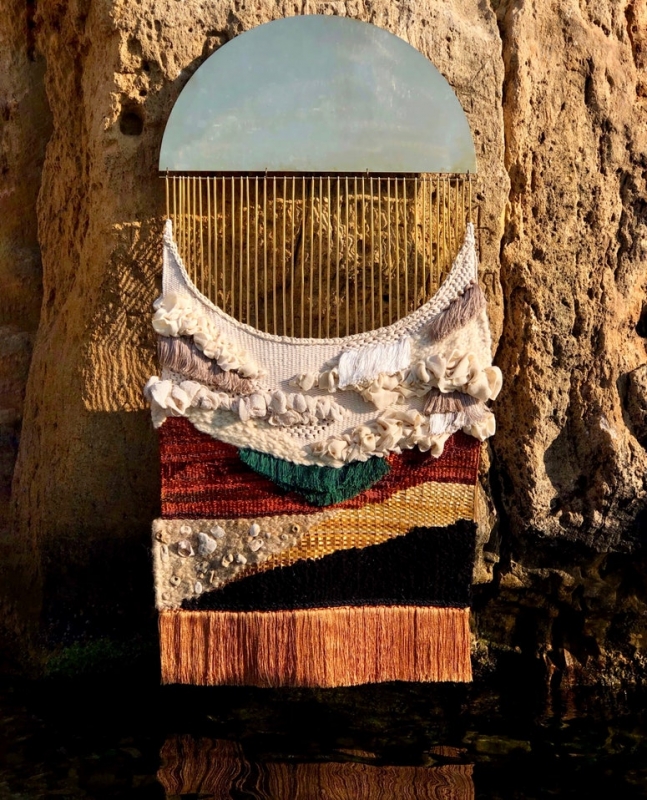