Sometimes customers who come to the designer with a very specific request, in the process of working on the interior, greatly transform their preferences. Atelier Interior studio headed by Marina Braginskaya told how traditional Scandinavian aesthetics were replaced by fashionable modern design with bright accents 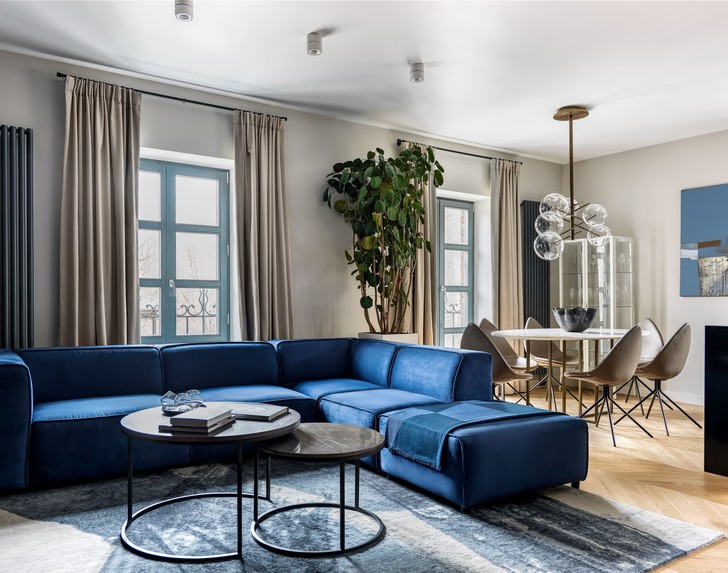 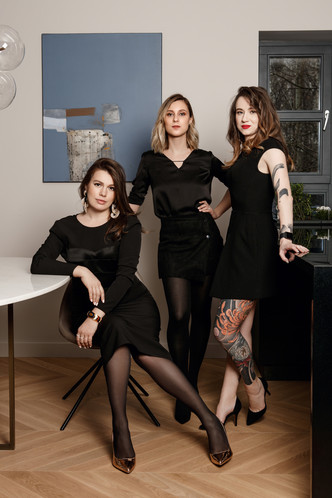 The main idea of the project: to create a visually clean and functional space 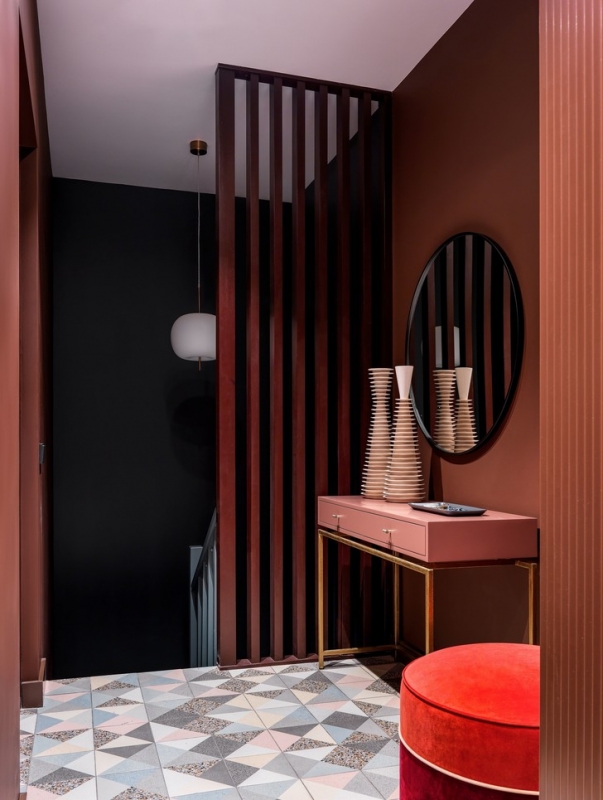 Console and pouf, Rooma. The cabinet is made to order according to sketches of Atelier Interior. Vases, Attribute. Painting from the series “Journey to the South”, Christian Evan, gallery Carre d’artistes Moscow.

My customers, a young married couple, were initially set up for an interior in a traditional Scandinavian style with white walls and wooden furniture. But in the process, it turned out that they like modern design items and unusual color combinations. Even the dream bedroom turned out to be not white at all, but graphite. 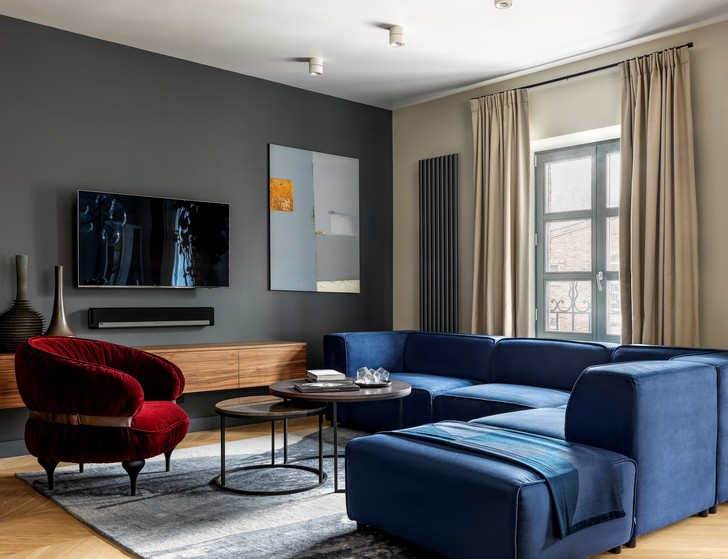 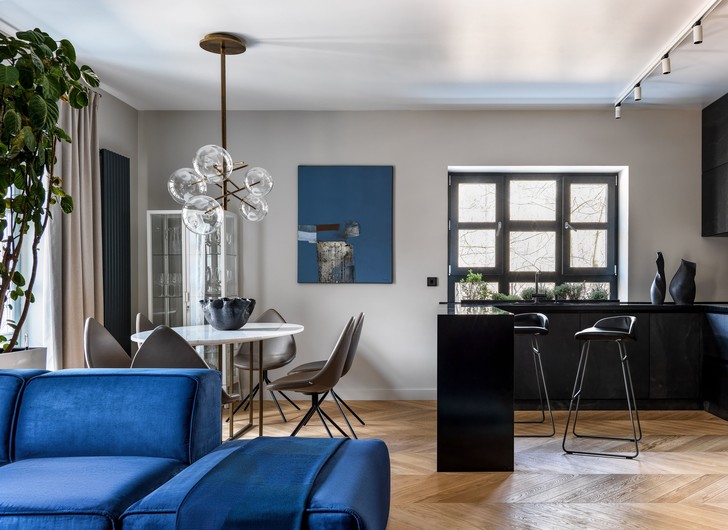 The layout of the apartment is similar to a townhouse, but all the main living space is on the second level. On the ground floor there is an entrance hall, and in the basement there is a technical area and dressing rooms. An important architectural task was to change the height of the windows. They were extremely unsuccessful: with a small width, the window openings started too high and hid the amount of space. After studying the facades of this and neighboring buildings, we agreed to increase the windows in the entire apartment. This has radically changed the impression of the interior! 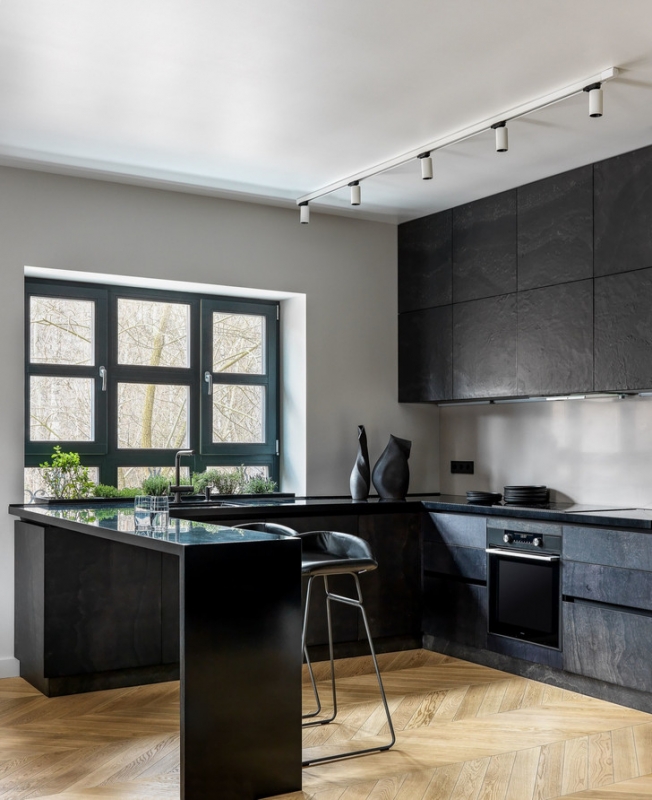 The kitchen and the bar counter are made to order according to the sketch of Atelier Interior. Bar stools, Tonin Casa. Vases, Attribute. 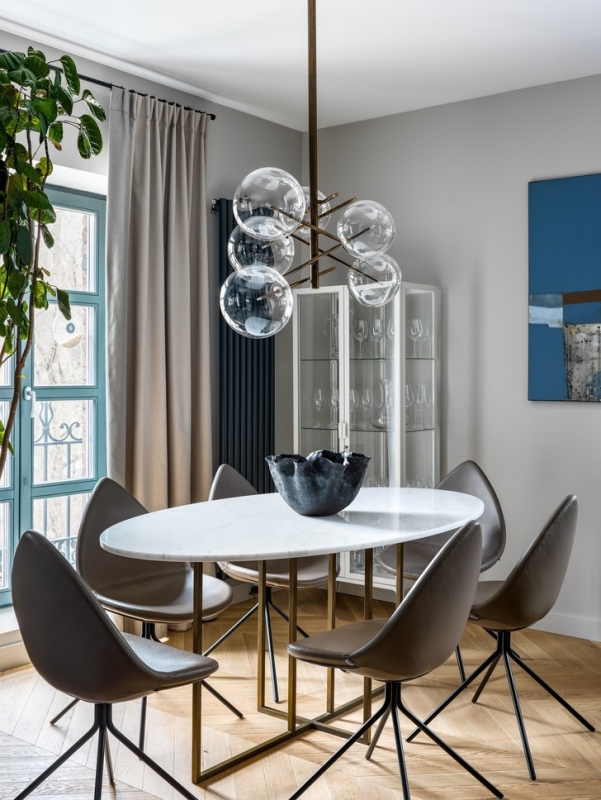 The owners of the apartment cook a lot and like to receive guests, so customers had many wishes for the organization of the kitchen space. A built—in cooler, a small oasis with greenery on the window, functional and clearly distributed filling of kitchen cabinets – we took everything into account and designed a laconic kitchen with a stone veneer finish. 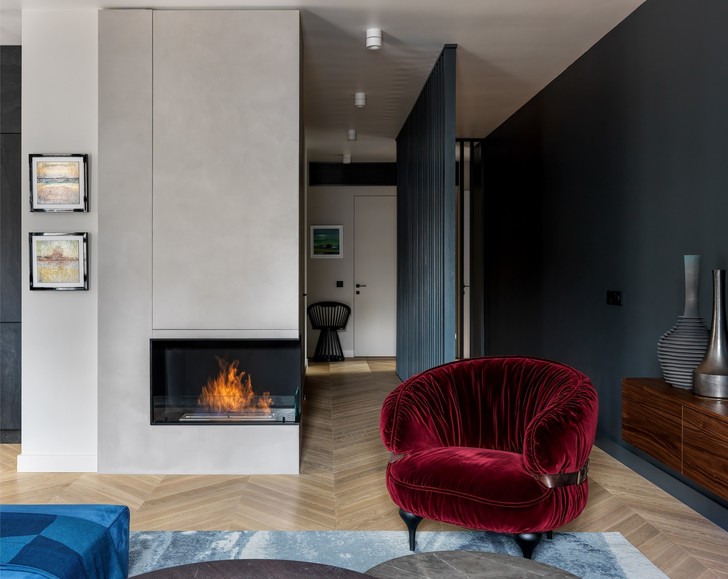 When customers bought an apartment, they were promised a chimney and guaranteed the possibility of installing a full-fledged fireplace in the living room. However, later it turned out that none of this was provided for, and we came to an ambitious decision — to install a bio-fireplace of an unusual shape. The column in which it is built is finished with light micro-cement with a delicate texture. 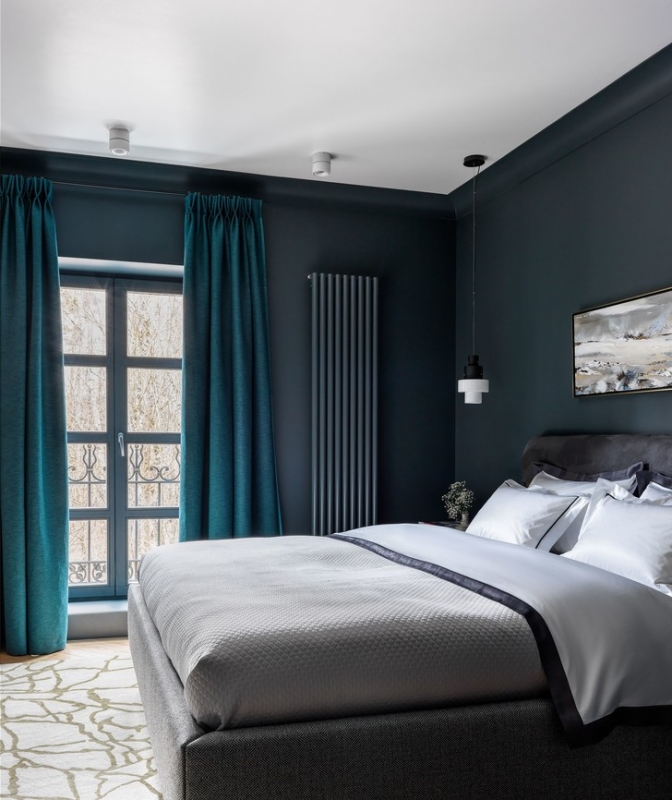 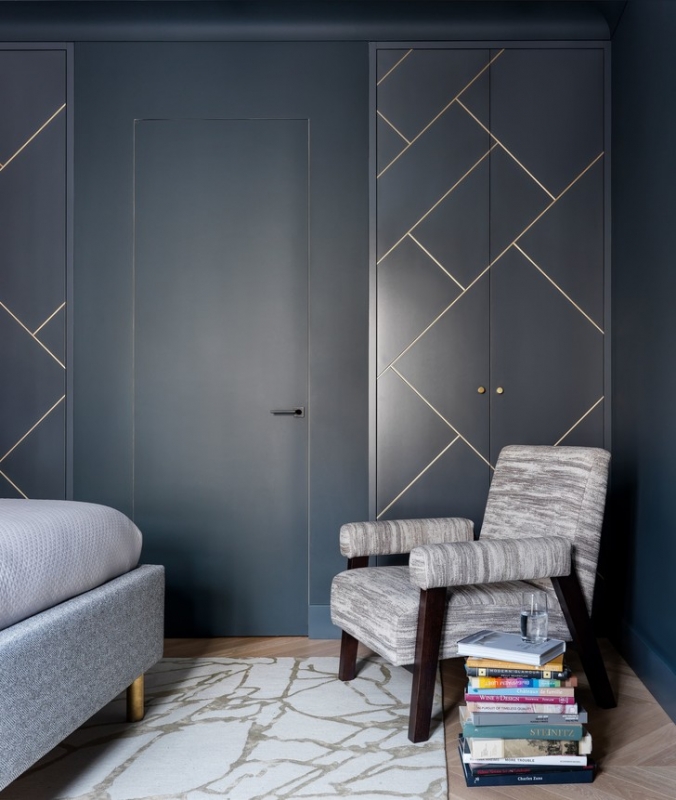 Bedroom. The cabinets are made to order according to the sketch of Atelier Interior. Chair, Loffilab.

Despite the presence of a separate dressing room, the customers insisted on creating additional storage spaces in the bedroom. So that the built-in cabinets do not violate the geometry of the space, we painted them to match the walls and added decorative elements made of natural brass. A silk rug from The Rug Company, designed by Kelly Wearstler, enters into a dialogue with geometric lines on the cabinets. Initially, the owners were not sure that they needed a carpet in the bedroom, but when it was brought for fitting, they saw how it transforms the interior. 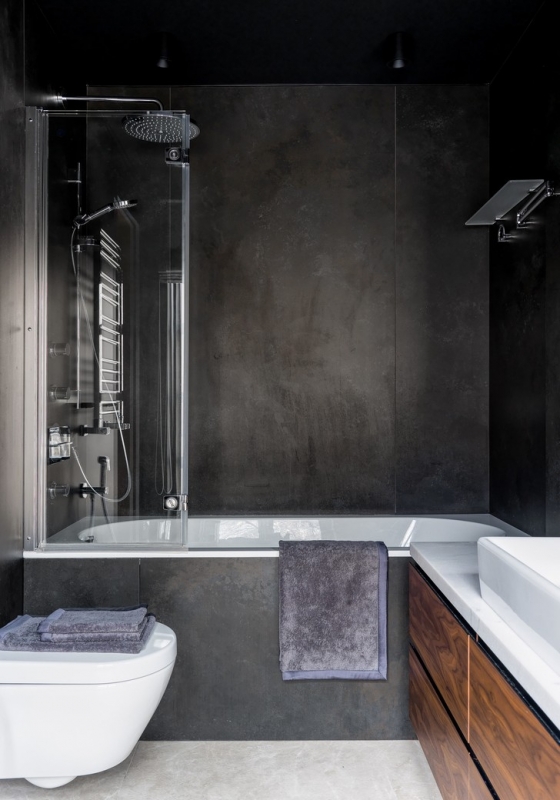 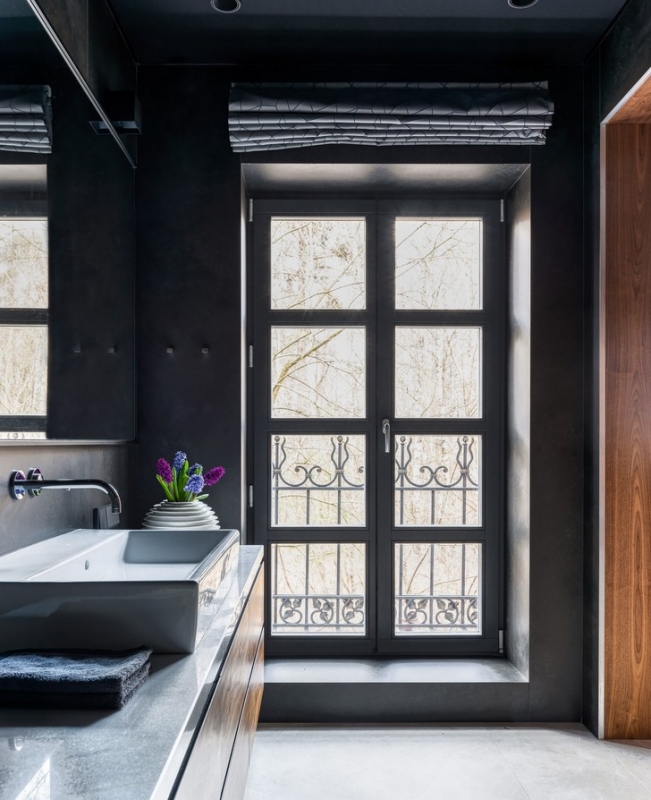 The cabinet and mirror are made to order according to sketches by Atelier Interior. Mixer, Axor.

For the main bathroom, we chose dark porcelain tile Arch-Skin — they lined the walls, floor and even window slopes. To soften its severity, we chose a hanging cabinet made of walnut wood with a stone countertop. The guest bathroom turned out to be concise, but at the same time bright. The main accent for ceramics from Cielo is a rich turquoise background. 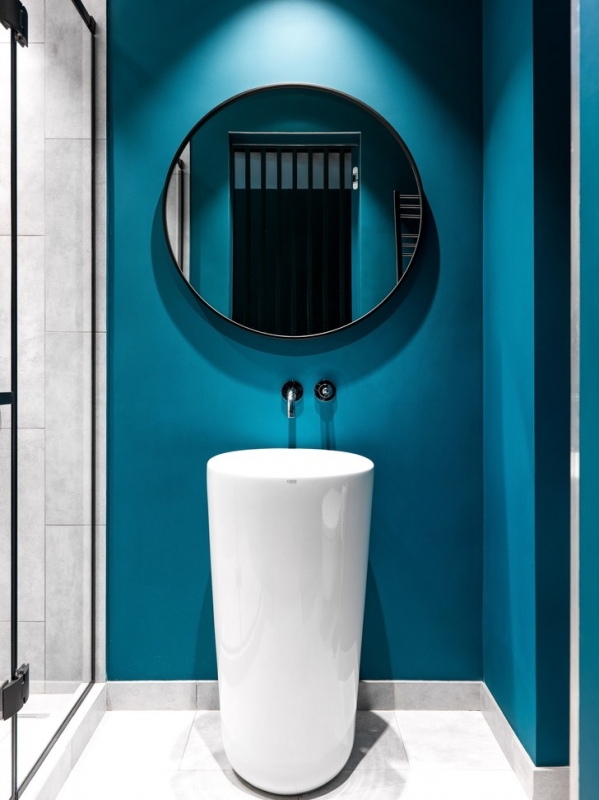