Let’s remember how and where one of Bernardo Bertolucci’s most famous films of the 1990s, “Elusive Beauty”, was filmed 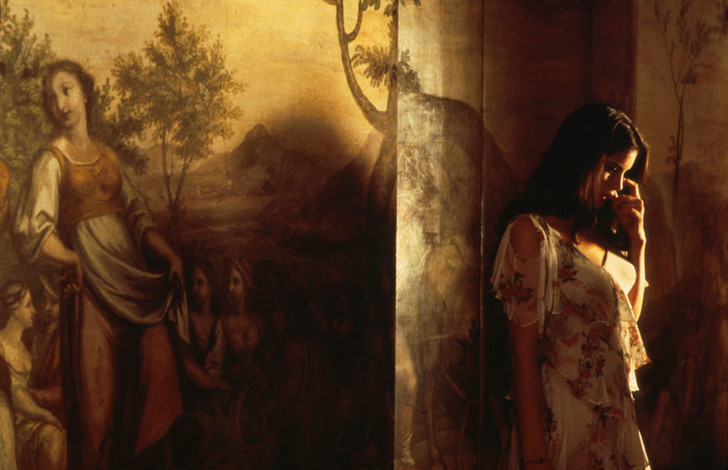 Liv Tyler on the set of “Elusive Beauty” at Villa di Gejano in Tuscany.

When Bernardo Bertolucci visited his old friend, Count Andrea Bianchi Bandinelli, in 1995, he realized that he had finally found what he was looking for. Bertolucci was just starting filming “Elusive Beauty”, and he needed an old villa in Tuscany with a large garden. Three-storey Villa di Geggiano (Villa di Geggiano) with an area of 2000 sq. m. m in the late Baroque style, with a guest house, a family chapel, a garden, romantic alleys framed by century-old cypresses and lemon trees, a theater, a pond with goldfish, suited him in all respects. The villa is declared a national treasure in Italy, and its garden is considered one of the most beautiful in Tuscany. 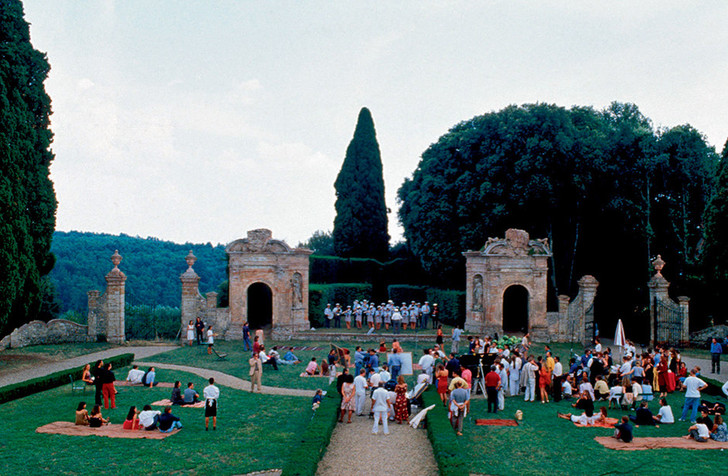 Shooting an episode in the Green Villa Theater. 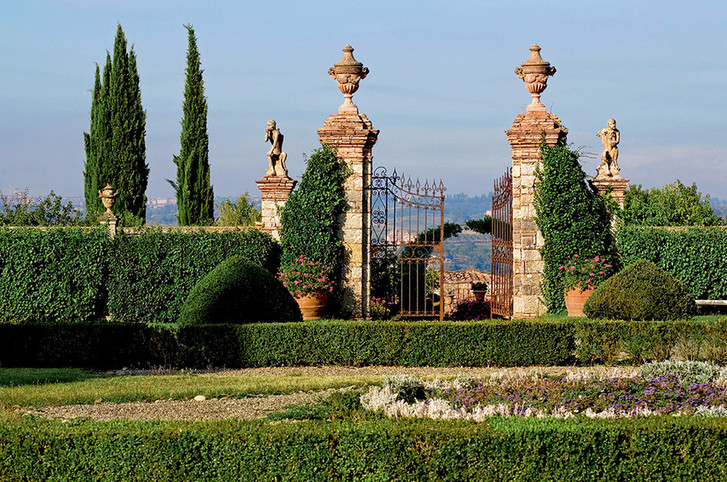 An ancient gate leads to the south-western part of the estate — to a pond with goldfish, vegetable gardens and vineyards. By the way, wine has been made at Villa di Gejano since 1725.

The 25-hectare estate is located five kilometers from Siena and is surrounded by picturesque green hills with vineyards and olive groves. The villa itself is more than 700 years old, and the Bandinelli family has owned it for the last five centuries. The Bandinelli family is one of the oldest in Italy, many famous personalities belong to it, including Pope Alexander III. 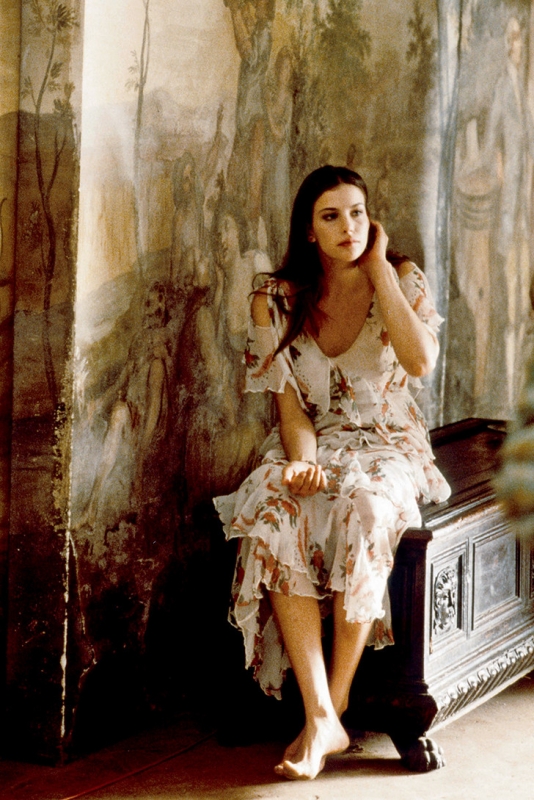 Liv Tyler is resting in between takes, sitting on an antique chest in the living room. 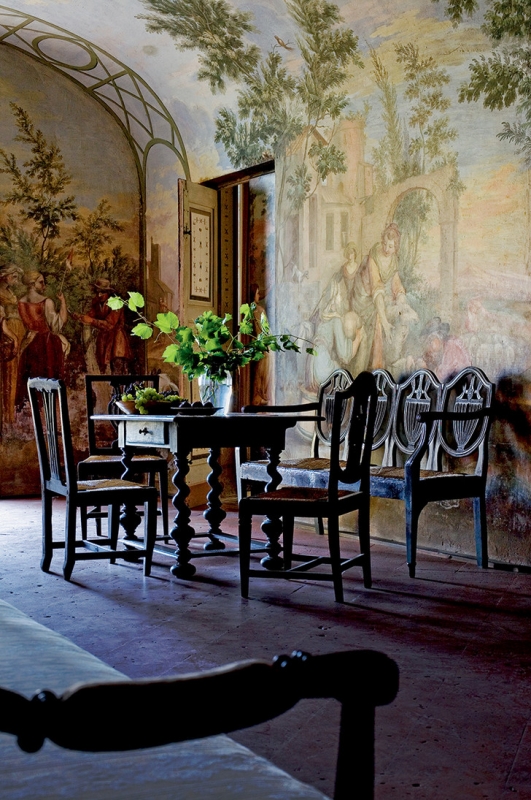 The main hall. In the XVIII century, the Tyrolean artist Ignatius Moder painted its walls and ceiling with frescoes with allegories of twelve months. The table and couch were brought from Germany in the XIX century by the owner’s great-grandmother, a German by nationality. There’s a dance in this room in the movie. 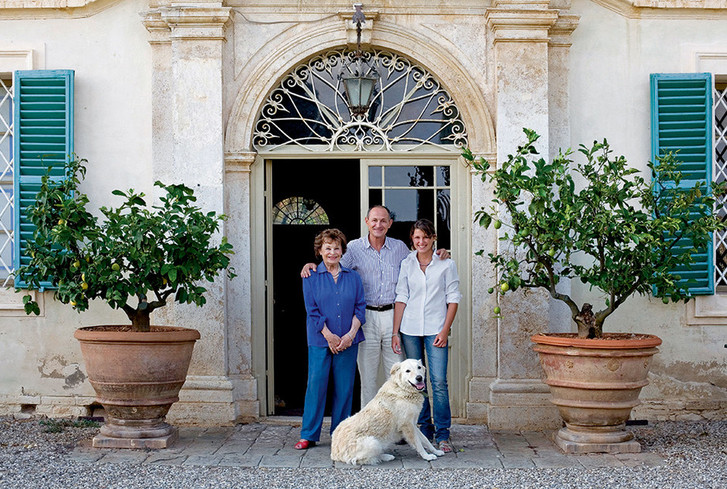 The owner of the villa, Count Andrea Bianchi Bandinelli, with his mother, Countess Alessandra, and daughter Bianca.

The owner of Villa di Gejano, Count Andrea Bandinelli, recalls the shooting of “Elusive Beauty” with nostalgia. “Some actors, for example, our old friend Jeremy Irons with his wife and children, Stefania Sandrelli and Liv Tyler with her mother and her dog, we settled right in the villa. Liv Tyler was just a child then — an ordinary American teenager, it’s in the film she has a much more complex image. This whole company stayed with us all summer, it was a lot of fun. Liv spent hours cycling around the garden (these shots are also in the film), playing with my children… Bertolucci, of course, shot much more material than was later included in the film.” 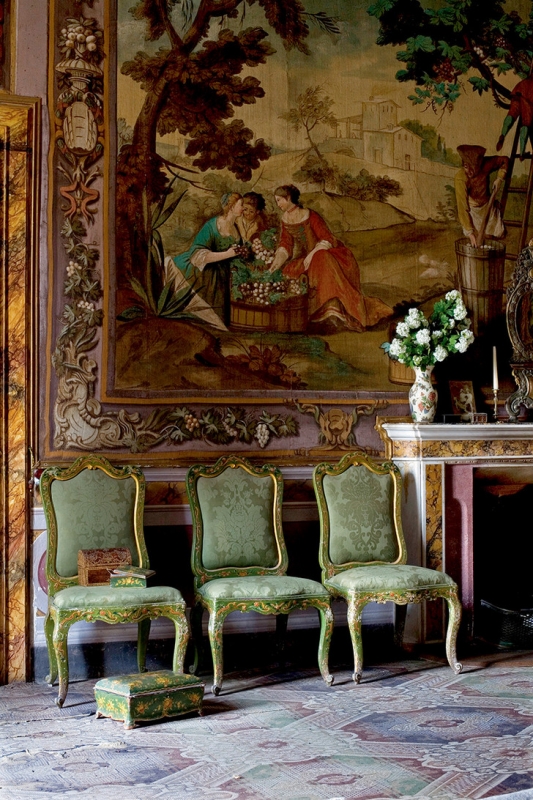 The green room is on the second floor. The walls are decorated with “fake tapestries” by Ignatius Moder. The drawing on them is not woven, but painted in oil on canvas. Chairs and wooden footstools were made by Sienese craftsmen in the XVIII century. 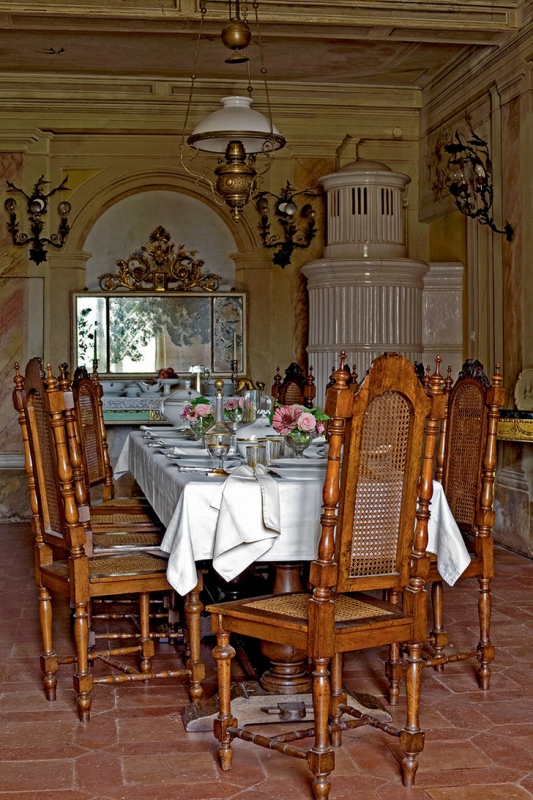 The dining room is on the ground floor. In the background is a mirror of the XVIII century. The massive ceramic oven was made in 1950 in Austria according to the sketch of the owner’s grandfather — the famous archaeologist and historian Ranuccio Bianca Bandinelli.

“Liv Tyler was a typical American teenager. She spent hours cycling around the garden and playing with my children.” 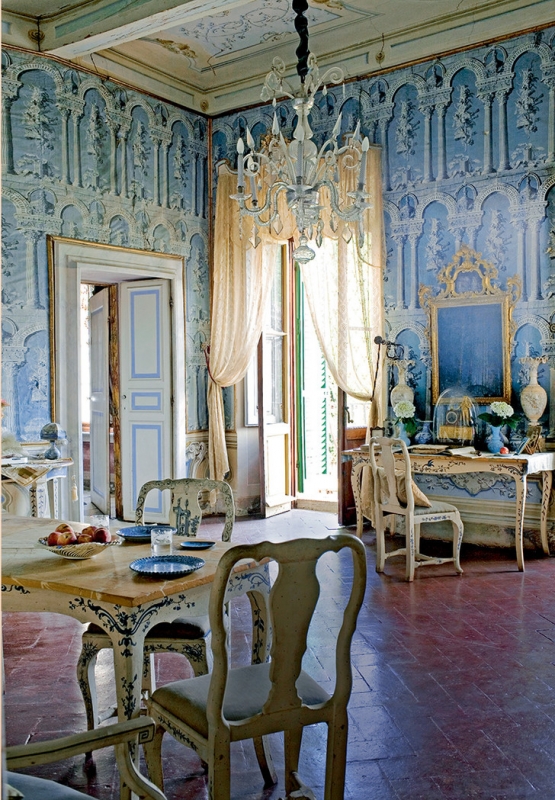 All the furnishings of the Blue Room on the second floor have been preserved since the XVIII century. The walls are covered with French wallpaper. Above the dressing table is a mirror made by Sienese masters, next to two alabaster vases made in Volterra. In the center of the room is a chandelier made of Bohemian crystal. 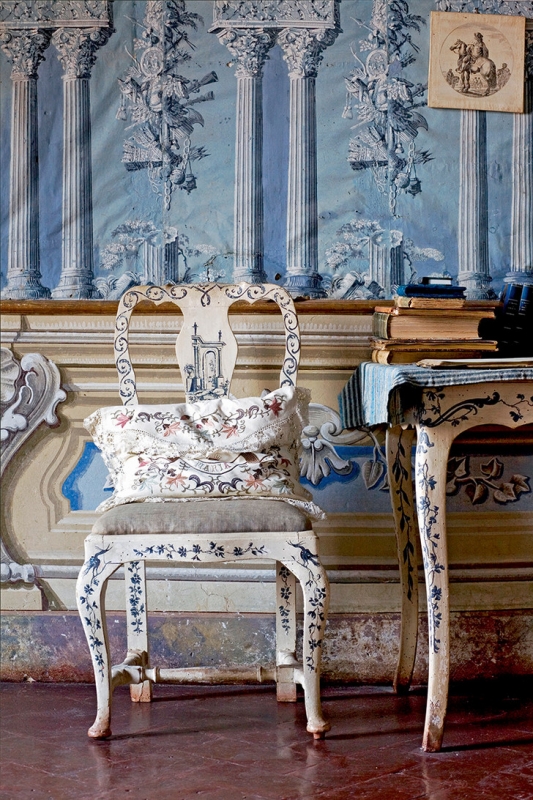 The painted chairs in the Blue Room were made by Sienese craftsmen at the beginning of the XIX century. 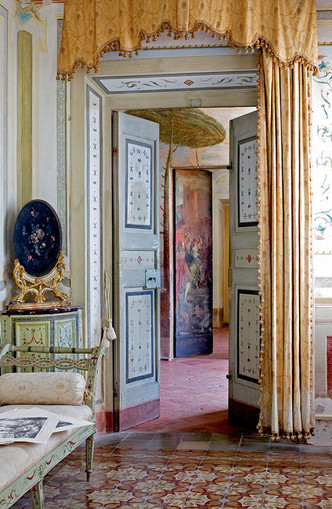 The corridor on the ground floor leads to the Ciarlatorio (“Gossip Room”) — during the holidays, women gathered in this room and discussed the news. On a small pedestal to the left of the door there is an iron tray with a painting on which servants served soft drinks to women. Draperies have been preserved since the XVIII century. 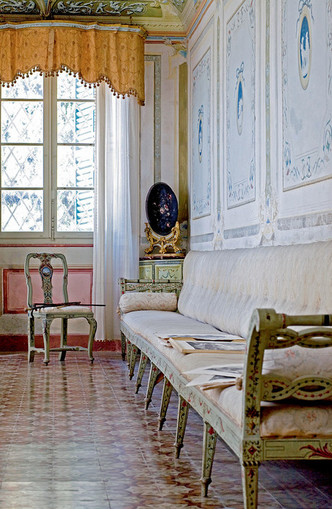 Against the wall of the Gossip Room there is a long sofa of the XVIII century, in the far right corner there is another decorative iron tray for drinks.

Andrea and Tatiana Bandinelli, both originally from Milan, met at the University of Rome, where they studied architecture. Then they lived in Rome, and they came to the villa only in the summer — just like other Bandinelli, who had used the house as a “summer cottage” for centuries. Shortly before the memorable visit of Bernardo Bertolucci, the family moved to live in Gejano — away from the noise of the city. Tatiana became the director of one of the museums of Siena, and Andrea, leaving a high post in the Olivetti company, devoted himself to the house. “At first, my wife longed for Rome, but now we are glad that we have moved,” he says. ”Our children grew up in a calm environment, in nature — the quality of life here is exceptional, and the whole world comes to visit us.” 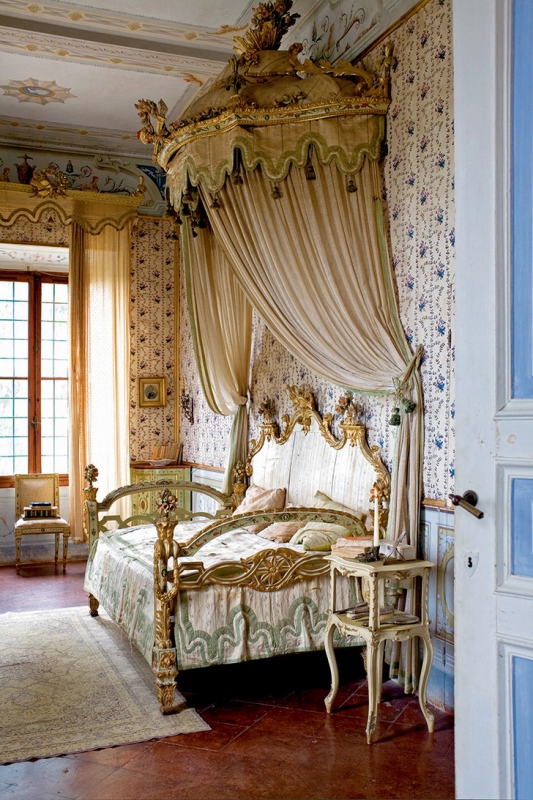 The bedroom of the playwright Vittorio Alfieri (300 years ago he lived for a long time in the villa and staged his plays in the green theater) is furnished in the style of Venetian Baroque. The bed is considered one of the family heirlooms.

Count Bandinelli married a commoner, and his father disinherited him. There was no money to upgrade the interior. Therefore, everything has been preserved intact! 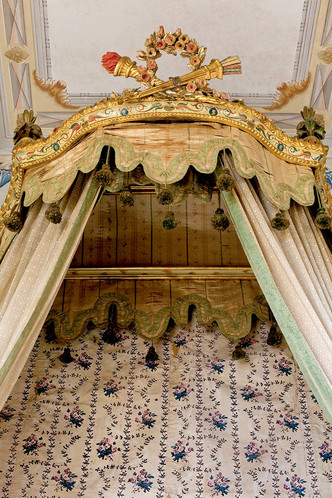 The bedroom of the playwright Vittorio Alfieri. 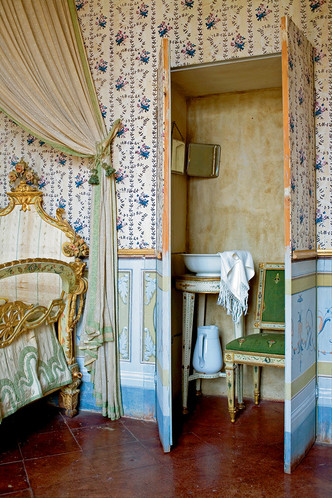 Adjacent to the bedroom is a secret room with a washbasin. In total, the house has 30 rooms and 9 bathrooms.

The count took up the family estate in earnest. He established the supply of wine (chianti is made here according to old “organic” recipes) to the best hotels and restaurants in Europe and America, began to arrange summer classical music concerts (the Berlin Philharmonic Orchestra regularly performs in the green theater) and lead tours around the house. And there is something to tell him — every corner of Villa di Gejano has its own story. For example, the main hall — it appears several times in the film — is decorated with frescoes made by the Tyrolean artist Ignatius Moder. The decor is dominated by painted furniture in the style of veneziano rustico — it was in fashion in the middle of the XVIII century. The walls of the bedrooms are covered with French jouy fabric. Closets and chests are chock-full of old clothes, some copies belong to the middle of the XVI century. In one of the bedrooms there is a giant four-poster bed with a portrait of Pope Pius VI.

During the Napoleonic Wars, Pius VI was forced to flee the Vatican and hide for a long time in one of the monasteries of Siena. Naturally, there was no decent bed for his Holiness, and, as the story goes, they turned to Villa di Gejano for help. Bandinelli was immediately sent to the monastery of the most luxurious bed available, which later, after the expulsion of Napoleon, the pope ordered to return. As a thank you, he presented his portrait, having ordered to attach it to the headboard. 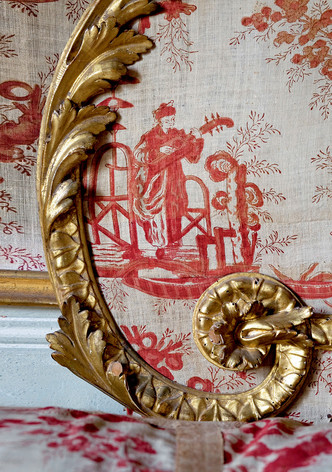 A fragment of the headboard of the legendary bed on which the pope slept. It is made by Sienese craftsmen from gilded wood and covered with a rui fabric with a Chinoiserie pattern fashionable in the XVIII century. 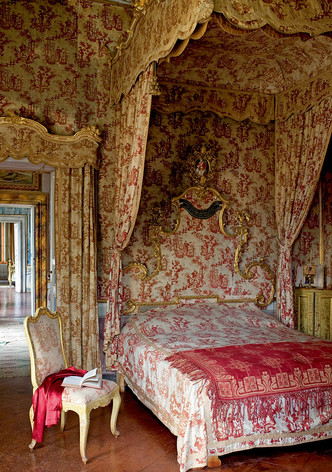 Above the headboard in an oval frame is a portrait of the pope.

“My great—grandmother used to sleep on this bed – she, by the way, was one of the confidants of Queen Margaret of Savoy at one time,— recalls Andrea Bandinelli. — My wife and I decided to spend our wedding night on this bed. They went to bed, but both of them were somehow uncomfortable. And then we realized what was the matter: the pope was looking down on us! We covered his portrait with a blanket and… had a wonderful night!” 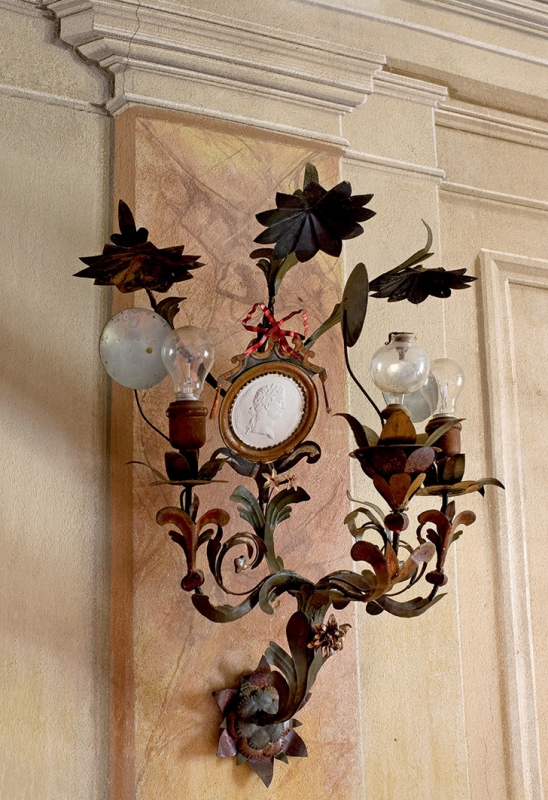 Sconces with portraits of Roman emperors appeared in the villa in the 1930s and initially worked not on electricity, but on kerosene.

Liv Tyler and her mother, former model and Playboy magazine star Bebe Buel, stayed on the ground floor — in a bright and spacious Bird Room (Camera degli Uccelli), so named because of the ceiling painted with birds and flowers. The furniture of this bedroom, as well as other rooms, has remained untouched since the end of the XVIII century. The fact that today everything here looks the same as two and a half centuries ago, the villa owes … love.

“The then owner of the villa, Count Mario Bianchi Bandinelli, fell in love with a commoner, and for this his father disinherited him. There was no money for restoration. Fortunately, the climate in our region is mild, and everything is perfectly preserved,” says Andrea Bandinelli. — Men in our family are generally famous for this — we marry only for love. I’ve also linked my life with a girl without a title, and we’ve been together for 23 years.” 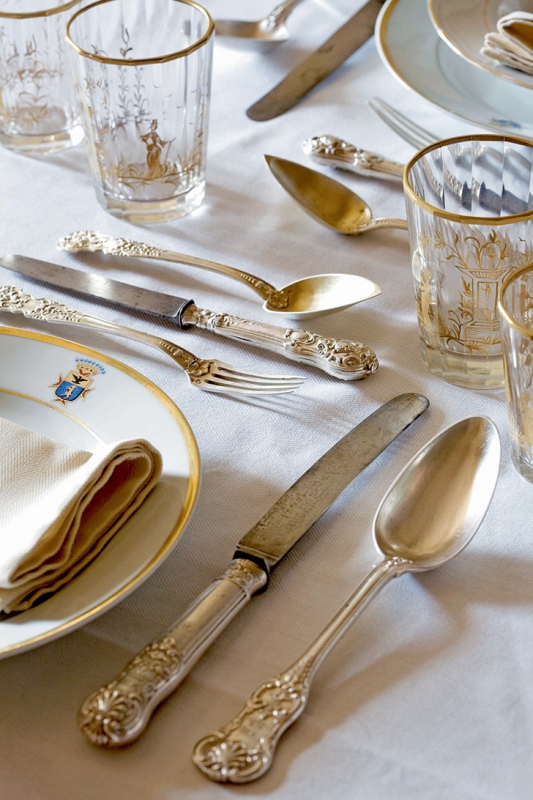 Family silver cutlery and porcelain tableware made by Florentine masters are decorated with the coat of arms of the Bandinelli family.