The house of designer Maryam Madavi, located in the suburbs of Brussels, resembles the backstage of a variety theater. Bright rooms are filled with extravagant decorations and mysterious things 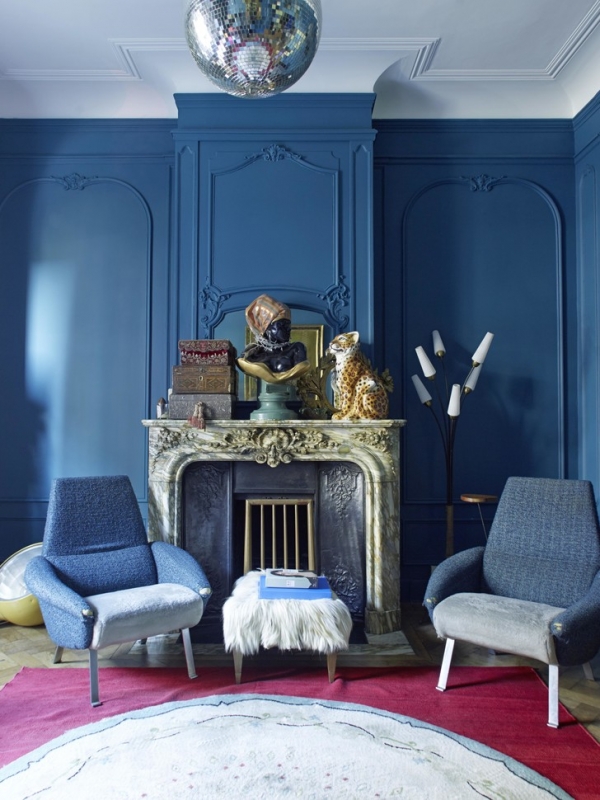 A fragment of the dining room. Carpet from Afghanistan. Armchairs, vintage, Sabena Airway.

If you are visiting designer Maryam Madavi for the first time, be prepared for the unexpected. Behind the austere facade of the 1920s building, a real explosion of color awaits you. Maryam interiors are akin to a theater, the role of actors in which decor items play.

The performance begins right in the hallway, where the astonished audience is greeted by a stuffed huge lioness. “Welcome to the jungle!” comes the cheerful voice of the hostess. Maryam runs down the steps of an ancient staircase, freezes in the pose of an eccentric grand lady and breaks into a smile. 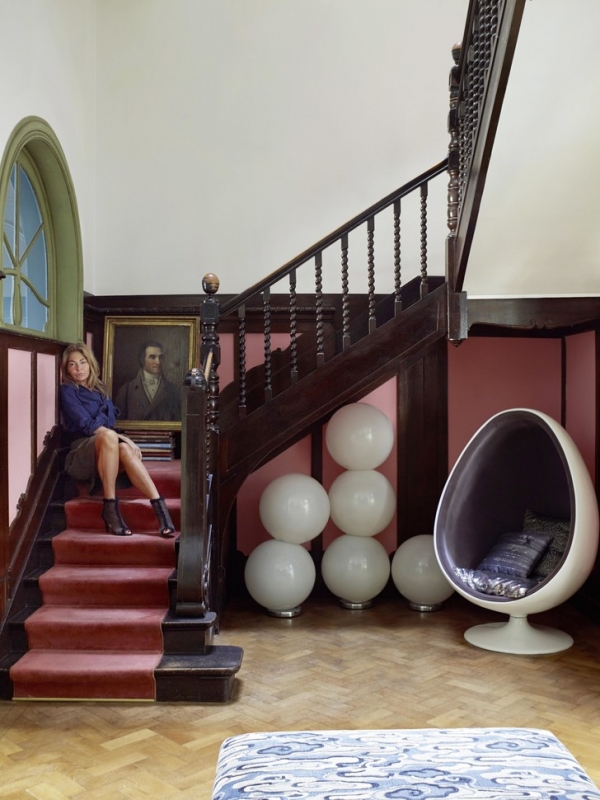 Decorator Maryam Madavi in the lobby of his house. Egg Pod chair, designed by Eero Aarnio. The composition of glass balls Light Screen is the work of Maryam Madavi.

Maryam Madavi plays on contrasts and combines incompatible things. This, in her opinion, brings life to the interior 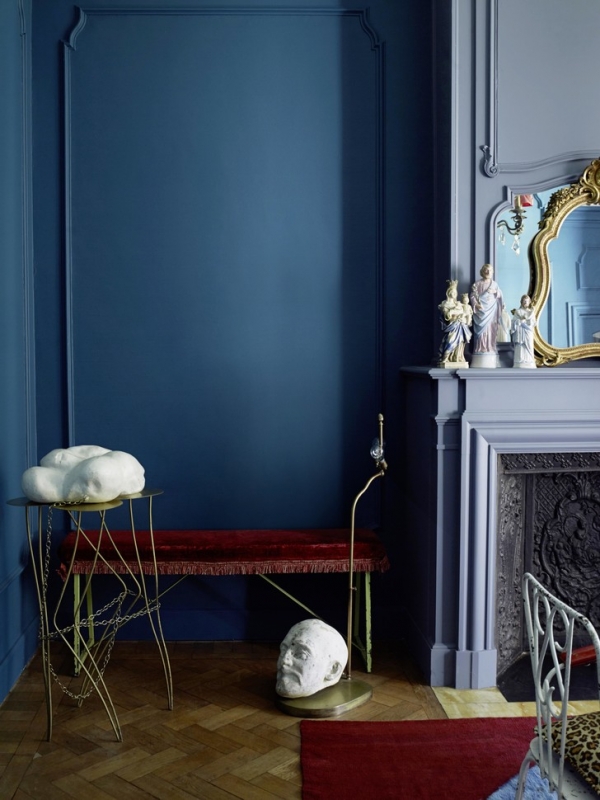 A fragment of the dining room. On the mantelpiece are Catholic figurines bought at auctions in Paris and London. Sculpture “Unbeliever”, by Maryam Madavi.

Every room in her house has its own name. Entrance hall — “Welcome to the jungle!”, recreation room – “Hemingway Bar”, kitchen – “Traveler’s Notes”. Maryam calls herself a decadent romantic. “I’m not one of those decorators who beautifully arranges finished furniture. I fill the space not with things, but with emotions—” she says. — Each interior has its own story that requires full dedication. That’s why I never take on more than one object at once.” 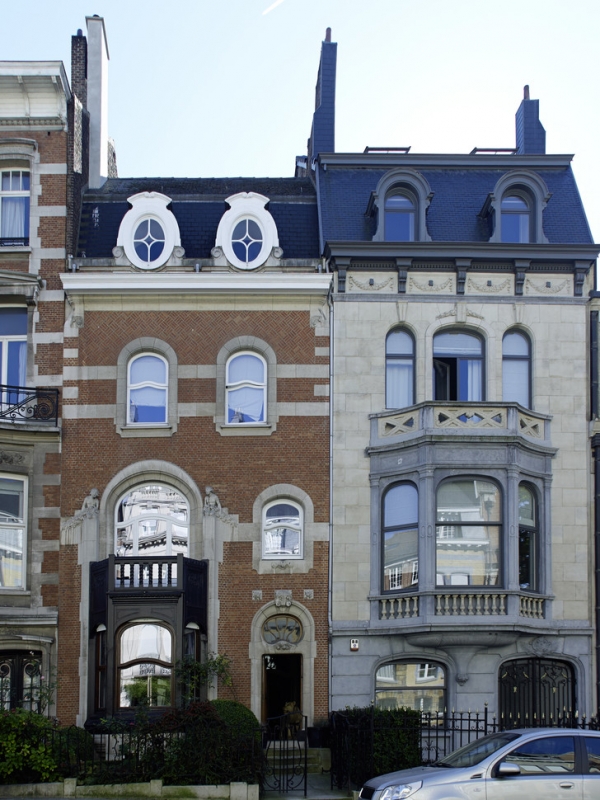 The Belle Epoque style house was built in the 1920s.

In addition to interior design, Maryam is engaged in the restoration of portraits of the XVIII century. “For me, these are processes of the same order. Restoring the portrait, I stare into the eyes of the person depicted on it for a long time. Through them, as if through a tunnel, I penetrate into his inner world. It’s the same with the interior. I try to grasp the essence of space, to understand what it lives, what it dreams about,” says Maryam. 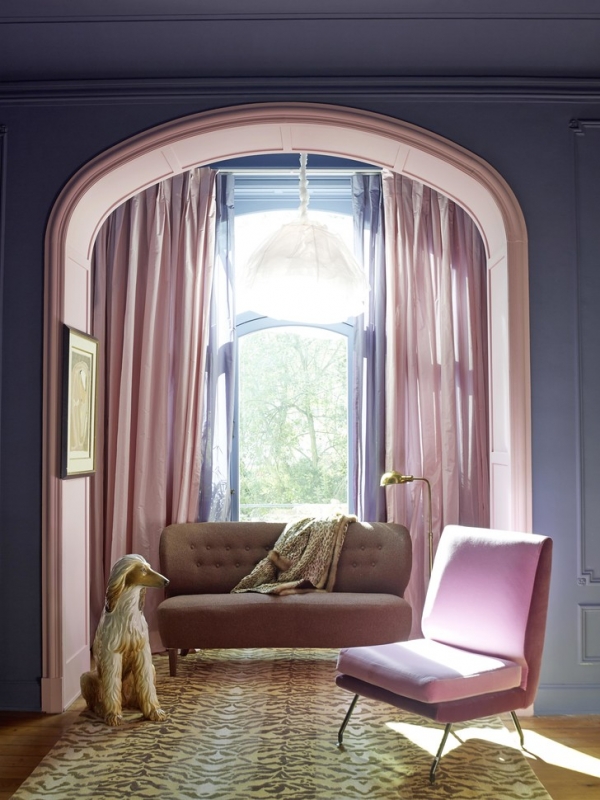 A fragment of the bedroom. The lamp with a lampshade in the form of a tutu is made according to the sketches of Maryam Madavi. The chair, designed by Joe Ponti, was bought at the Galerie Emmanuel de Caters in Brussels. The carpet is the creation of the famous Madeleine Kasten. Sofa, design by Otto Schultz, Boet, 1940s. Silk taffeta curtains, Rubelli. 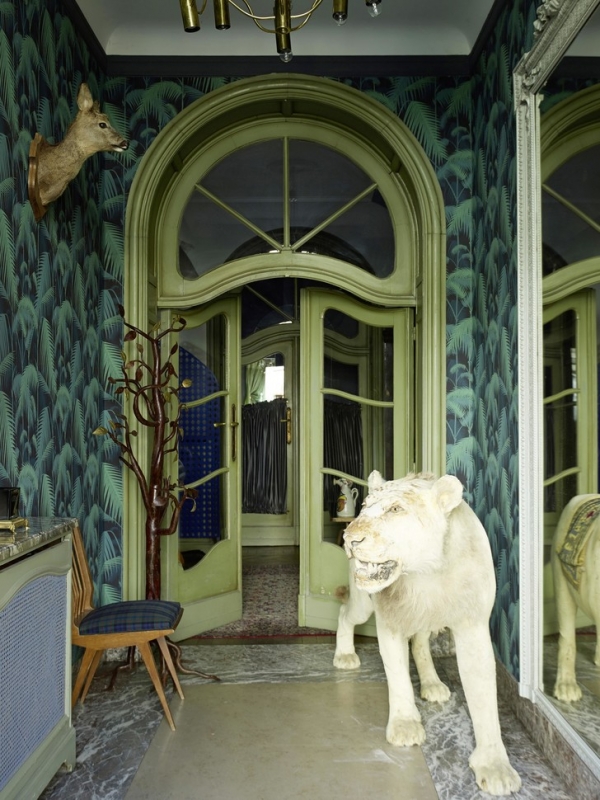 The interior of the hallway is called “Welcome to the jungle!”. On the marble floor there is an antique stuffed lioness. Wallpaper, Cole & Son. The shape of the doors and windows is characteristic of Belle Epoque architecture. The bronze hanger “Tree of Desires” is made according to the sketches of Maryam Madavi. Chair, designed by Joe Ponti.

The designer challenges the modern world, which he considers excessively conservative. In one room, she mixes objects of different times and styles. She lays a carpet from the famous Madeleine Castaing on top of the other two, and hangs a pair of seemingly incompatible lamps under the ceiling. 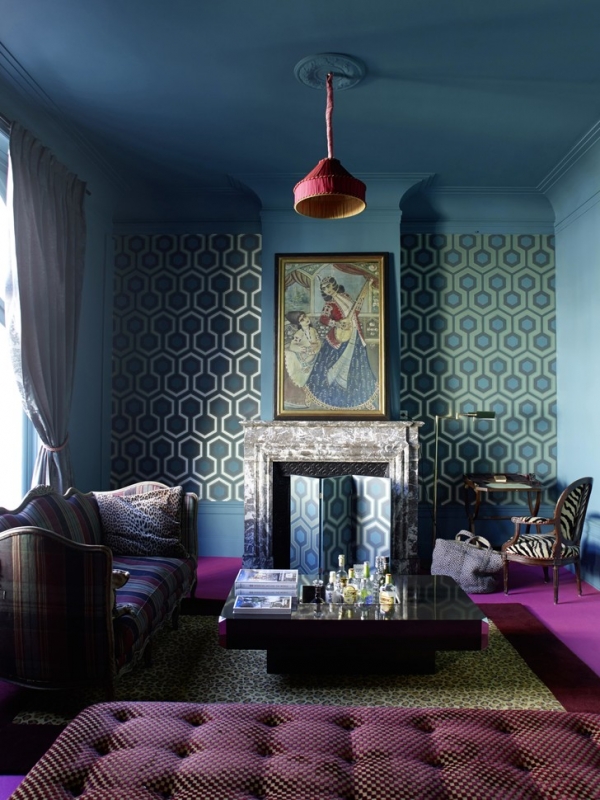 The recreation room, or, as the hostess calls it, “Hemingway Bar”. Leopard carpet, designed by Madeleine Castin, is laid on top of bordeaux and fuchsia carpets. Coffee table and ceiling lamp, designed by Maryam Madavi. Wallpaper, designed by David Hicks, Cole & Son. Above the fireplace is a painting of the XIX century, Iran. 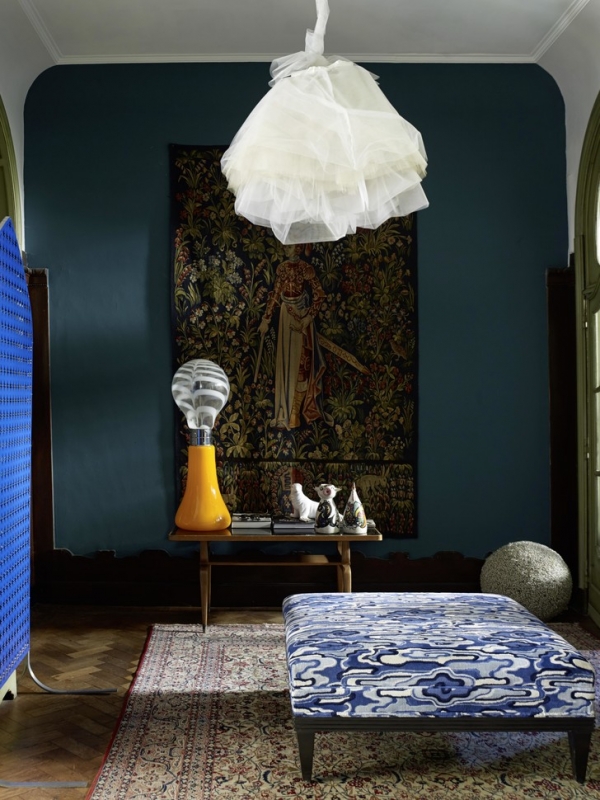 Hall. The pouf is upholstered in fabric from Kelly Wearstler. The ceiling lamp in the form of a ballet tutu is made according to the sketches of Maryam Madavi.

The sources of such decorative boldness should be found in the biography of Madavi. Let’s make a reservation right away: the designer of India Madavi, she has only a namesake. Maryam was born in Tehran. Her father was the Iranian ambassador to France. At the age of six, the girl was sent to a closed Swiss school. “In order not to die of boredom, I learned to soar in the clouds of my fantasies—” she recalls. – So the early separation from parents served as a powerful impetus for the development of imagination.” 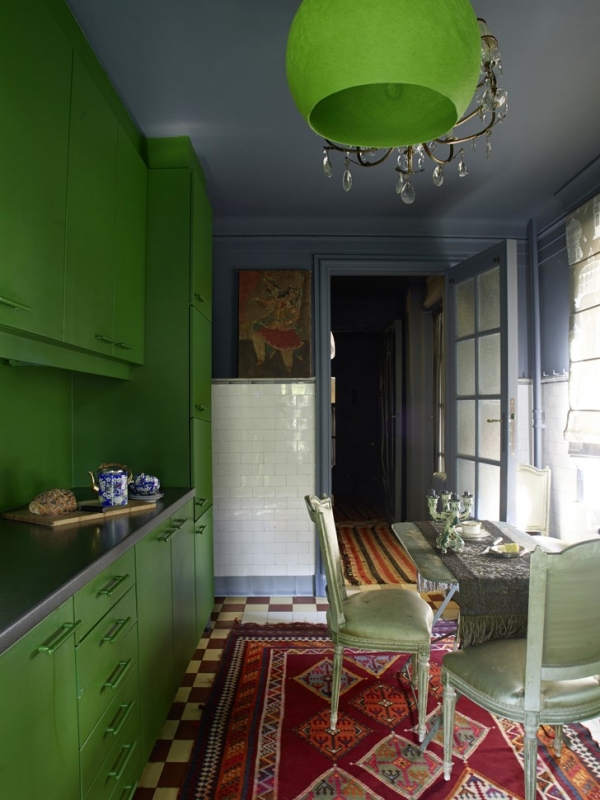 Kitchen. Maryam Madavi calls her inter-er “Notes of a traveler”. In a small space, the decorator mixed things of different times and styles. On the ancient kilim there are Gustavian chairs upholstered in satin. There are two chandeliers under the ceiling at once. One is from the time of the construction of the house, the second is modern, painted in a juicy shade of green salad. This, by the way, is the favorite color of the hostess of the house, she calls it the main source of vitality.

Later in Paris, she studied fashion design, received a diploma of a restorer of paintings at the prestigious Louvre School (École du Louvre). Then I tried myself in furniture design. And immediately success. Maryam’s first works were acquired by the David Hicks Gallery. Maryam’s work, like her biography, combines Persian and French motifs. She boldly uses feminine images, plays with color. 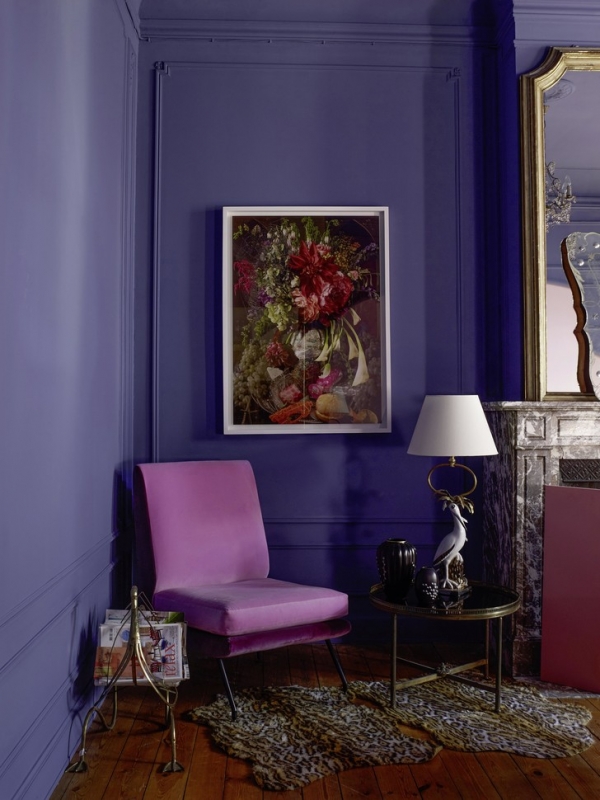 Bedroom. Maryam created its interior inspired by portraits of Hollywood stars of the 1940s. Armchair, designed by Joe Ponti, 1950s. Table lamp, Italy, 1950s. On the wall is a photograph of David Lachapelle. Table and newsstand, Maison Jansen.

“Bright colors are like people. They can be friends, quarrel, argue and even have affairs with each other” 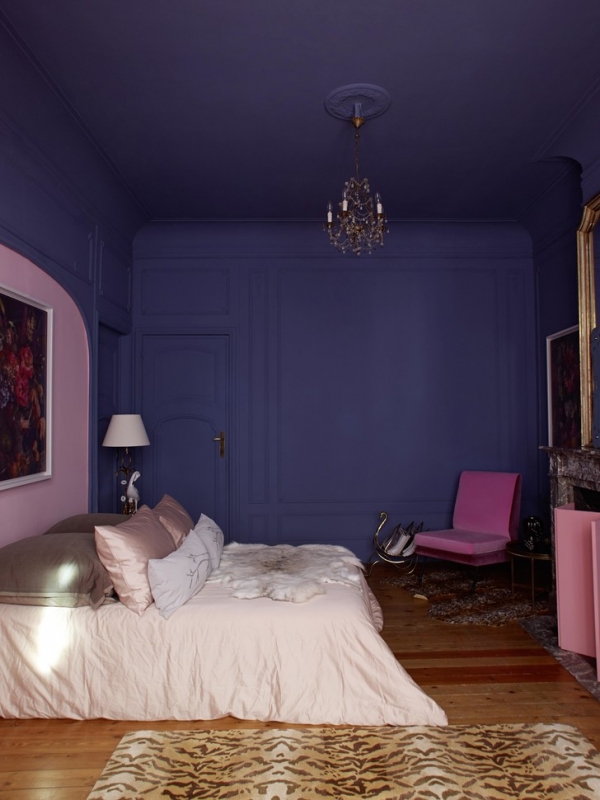 Bedroom. The abundance of satin, silk and fur, according to the hostess’s plan, create an atmosphere in the spirit of the famous singer and dancer Josephine Baker. On the wall at the head of the bed is a photograph of David Lachapelle. Table lamp, 1950s, Italy.

“I can’t imagine how you can live without color. For me, it’s like giving up air or water,” the designer admits. – Colors are like people. They can be friends, argue and even have affairs with each other. You can lock a couple in a room, and then sit on the sidelines and watch whether they get along or not. This is one of my favorite home entertainment. However, it is never boring here!”. 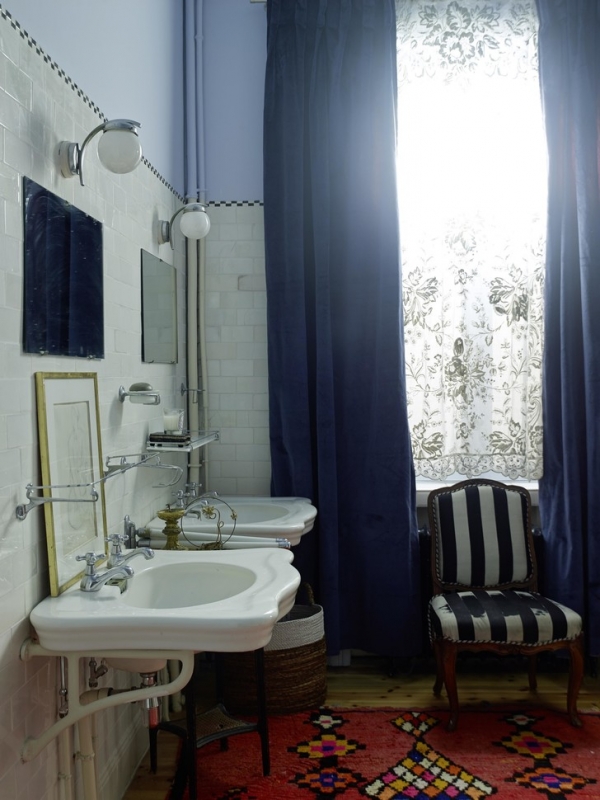 The bathroom is decorated as a living room. The only difference is that, in addition to carpets and armchairs, there is plumbing.