The editor-in-chief of ELLE Decoration Alexey Dorozhkin and his wife, artist Lena Sotnikova, invite everyone who has to stay at home to visit. We go with a virtual tour to their dacha. Stay tuned! 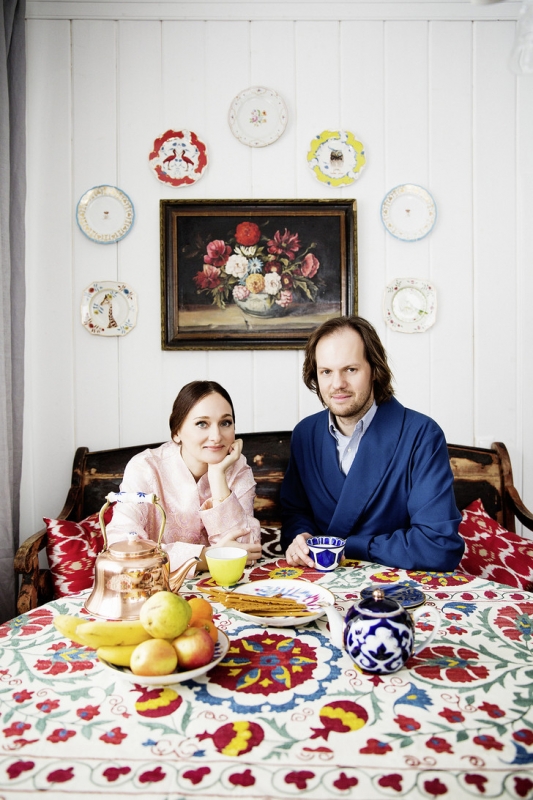 For a full video tour of the country house of the editor-in-chief of ELLE DECORATION Alexey Dorozhkin, see our official Instagram page (an extremist organization banned in Russia) at the link and especially for our website, Alexey gave a small blitz interview.How did you choose this house?

My wife, the artist Lena Sotnikova, and I were looking for a plot next to our old dacha — we really liked the place and direction, but there was nothing suitable.

We did not want to be built literally in an open field, and abandoned houses built in the mid-1990s did not interest us.

One day we came to see another house, which we also did not like. But I liked the village itself and, returning home, we saw a snow-covered hut with the inscription “for sale”. Naturally, we knocked, scaring away the builders who lived there, and they gave us the phone number of the owners.

We bought the house almost without looking, because we fell in love with a wide village street planted with trees, in an even row of colorful houses, almost not rebuilt into cottages, in the expanse of fields surrounding the village. 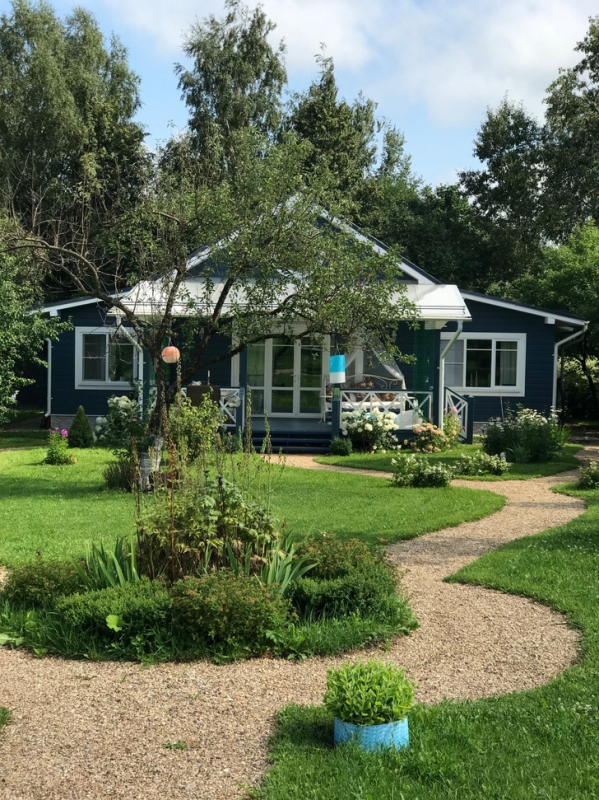 View of the house from the garden. 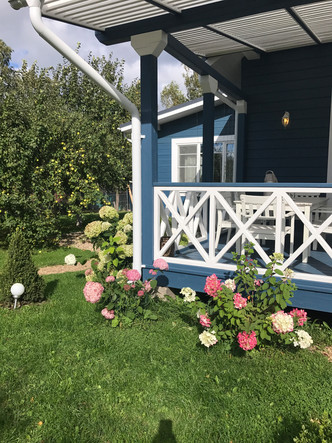 The porch has a spacious outdoor veranda with a dining area and a seating area. 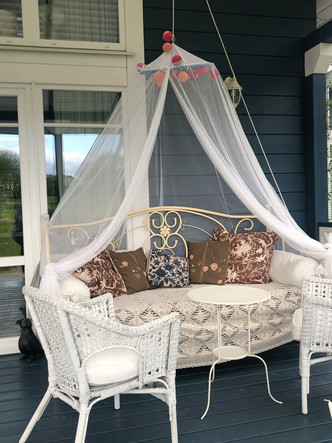 Recreation area. You can sleep on the couch on hot summer nights.

What had to be redone?

We realized the scale of disasters only in the spring, when the snow came down. The plot was huge, but abandoned and cluttered. The garden required cultivation. And the house itself seemed to be “breathing hard.” This did not bother us, because at first we planned to build a small guest house in its place and live there while we build the main house — modern, made of glass and concrete. But the house turned out to be stronger than we thought: we replaced the lower crowns, demolished the dilapidated verandas on the right and left and added new rooms: with a bathroom and kitchen on one side and a guest room and bedroom on the other. 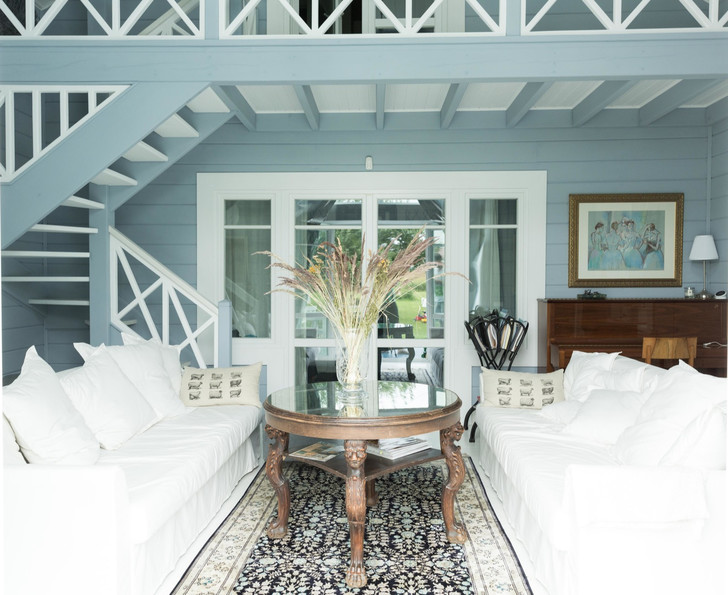 Two-light living room with stairs to the second floor. 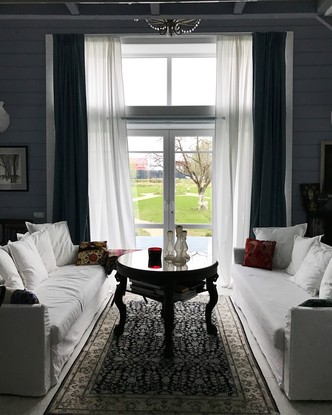 Living room. Sofas in white removable covers are an ideal option for a summer setting. 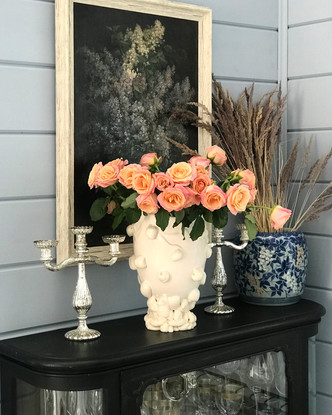 The inner “five-wall” was preserved — two rooms and a small living room with a stove, which also had to be moved. That was enough for the first time. And we postponed the big house until next year. But instead of building another crisis happened, there was no money for new construction, and we decided to expand the existing house. An exit from the small living room was planned to the terrace under the roof of two floors. In this place we added a two—light living room with a staircase to the second floor, where there was a cold attic, and now my office and my wife’s workshop. 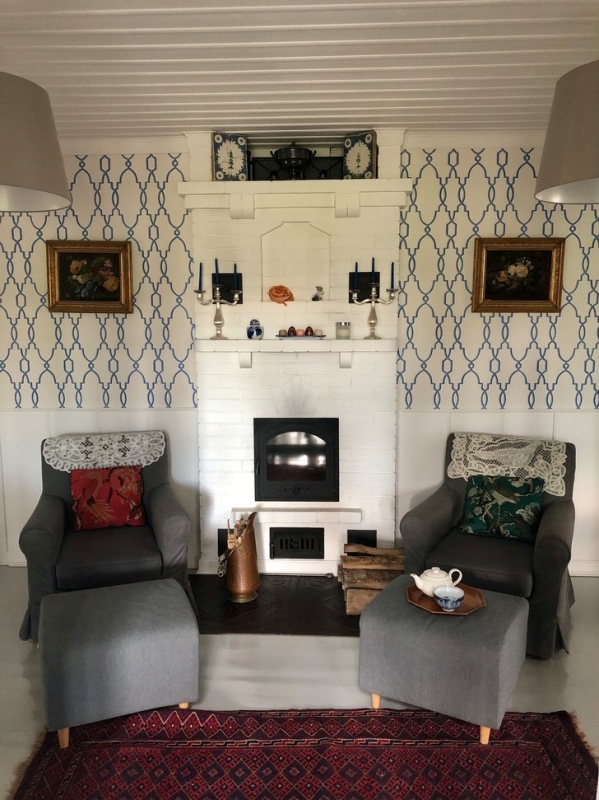 A room with a stove. The chairs are decorated with antique lace. On the wall — wallpaper Cole & Son. 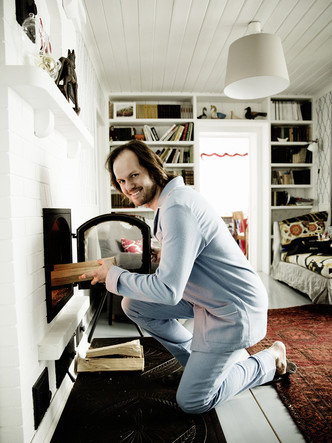 The old stove was moved, and now it serves the owners of the house faithfully. 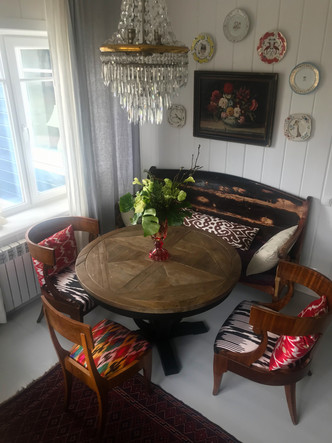 Canteen. On the wall above the antique wooden shop is a collection of plates, some of which were donated by decorator friends.

What was the main idea of interior design?

Everything should be in place, we decided. Externally, the house has not changed, it does not stand out in the building either in height or in fancy decoration. Except that the dull blue color looks Scandinavian. We were in a hurry to move, so the simplest materials were used: pine floors were painted with resistant concrete paint, ceilings were sewn with clapboard, the lower part of the walls were decorated with panels from a furniture board, and classic English and Swedish wallpaper was pasted above. A slightly Scandinavian version of the interior, however, as well as the American style “Hamptons”, is very suitable for our country houses. A little IKEA, some vintage furniture, soft blankets, pillows and suzanne, as well as chandeliers from the old furniture of our former apartment — and at the end of the first summer we moved. 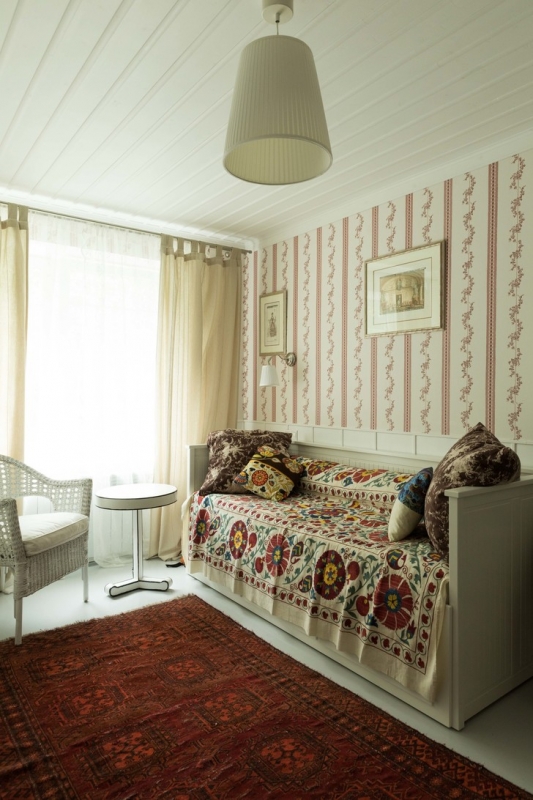 Guest room. Couch, IKEA. Boråstapeter wallpaper is on the wall.

What did you particularly succeed in the interior, and what would you redo?We managed to create an interior in which there is nothing artificial.

It looks harmonious both in summer and in winter, when the landscape outside the windows is radically changing. And the shortcomings surfaced by themselves — after five years I had to change the cracked tiles in the bathroom to wooden floors. And if the extensions were half a meter wider, more guests would fit in the dining room. 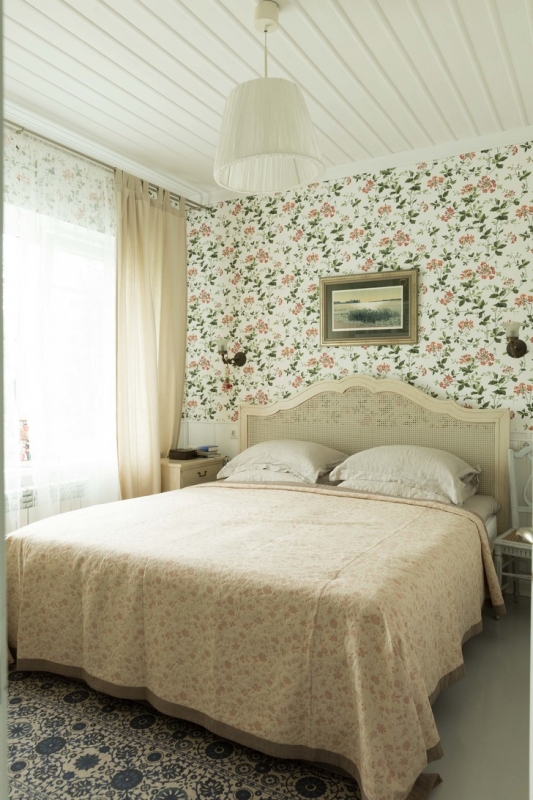 Bedroom. The Provence-style bed is complemented by English flowered wallpaper. 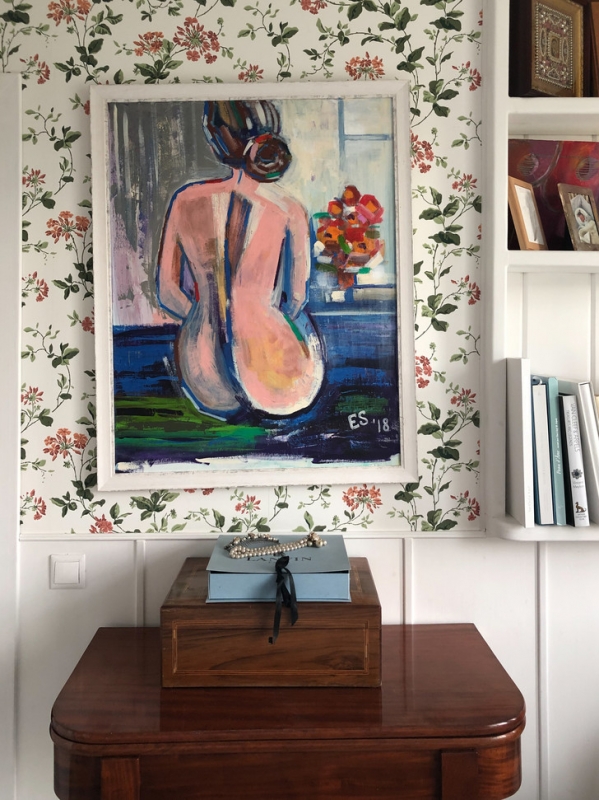 Bedroom, fragment. On the wall is the work of the hostess of the house, the artist Elena Sotnikova.

What is your favorite place in the house?Probably our living rooms — first we sit in the small one by the fireplace, and then we move to the big one to watch a movie or just chat, lounging on the sofas.

Two sofas opposite each other are not only very effective, but also quite a functional solution. There is a simulator behind one of the sofas, and it is not idle). Behind the other is a piano and a mirrored table.

What are your favorite interior items?It’s hard to say about your favorite, but the most comfortable ones are the couches on the first and second floors.

Both were bought on avito — I don’t understand why such convenient things stopped being produced. Lena most of all loves her piano and a mirrored table inherited from her grandfather. Actually, the table was marble, but the tabletop had long been broken, and the “inheritance” itself was received in disassembled form. While the restorers were practicing in outrageous pricing, our carpenter assembled the table in half a day, and instead of marble, we made a table top from an aged mirror. 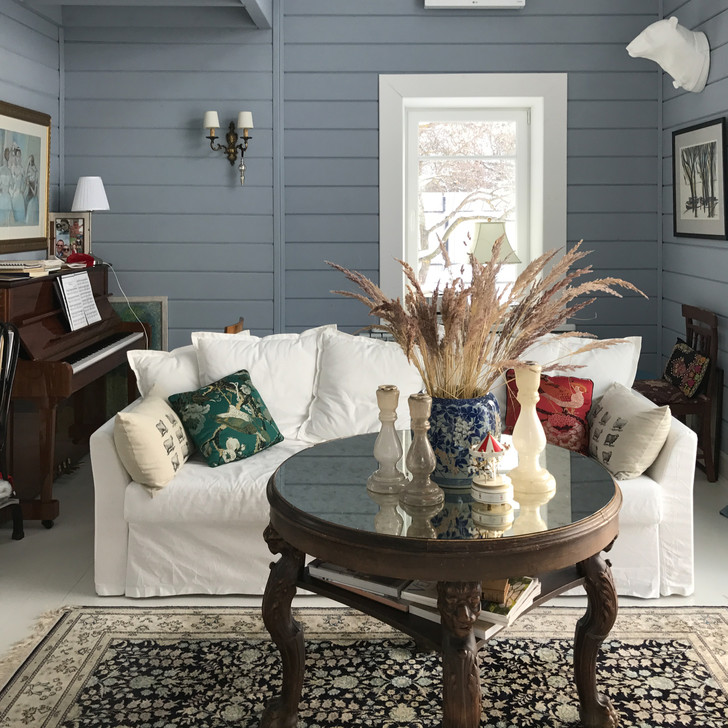 Is your perfect day at home?Get up early, drink green tea, then an hour and a half of yoga, shower and cheesecakes.

After that, an endless tea party on the terrace, with music and magazines. Then a bike or to the river, and when everyone is resting after lunch, on a non-hot day I go to work in the garden and can be busy there until dinner. And in the evening you can sit outside, covered with a blanket and watch a movie — a projector has been bought for this for a long time. And you can also go to bed on the terrace — there is a bed under a mosquito net. 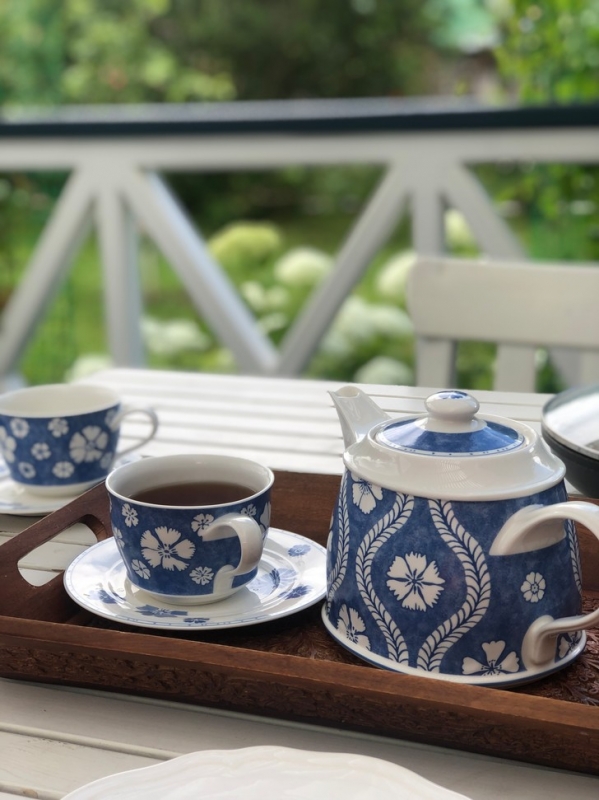