American fashion designer Betsy Johnson does not make a cult out of things. The objects of the great designers of the twentieth century became for her just an improvised material from which she built the interior of her dreams 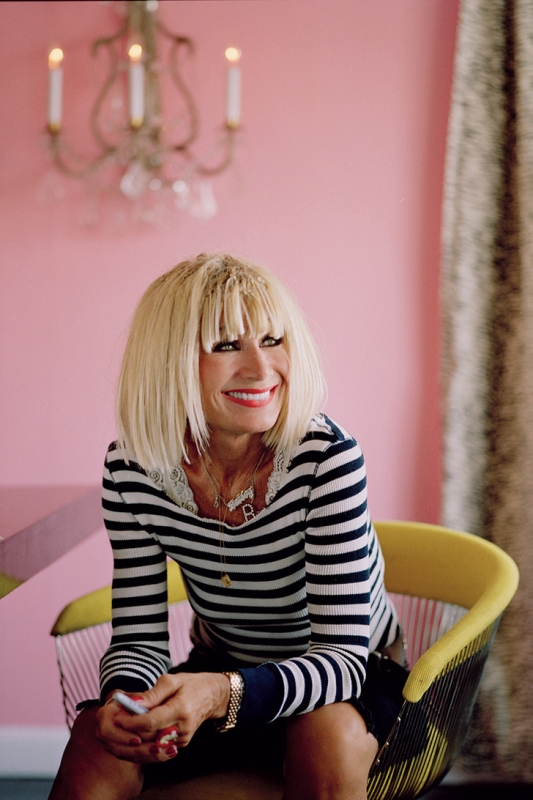 Betsy Johnson was a celebrity back in the days when the current fashion stars, as they say, walked under the table. Her career is considered one of the longest in the fashion industry. Imagine the Soty Award (the equivalent of the Oscar in the fashion world) Betsy got it back in 1972.

It’s hard to believe that this spectacular blonde with provocative makeup and a dazzling smile has already celebrated her 76th birthday! By the way, age does not prevent her from walking on the podium at the end of each show with a wheel; Betsy started this extravagant custom back in the days of her turbulent youth. 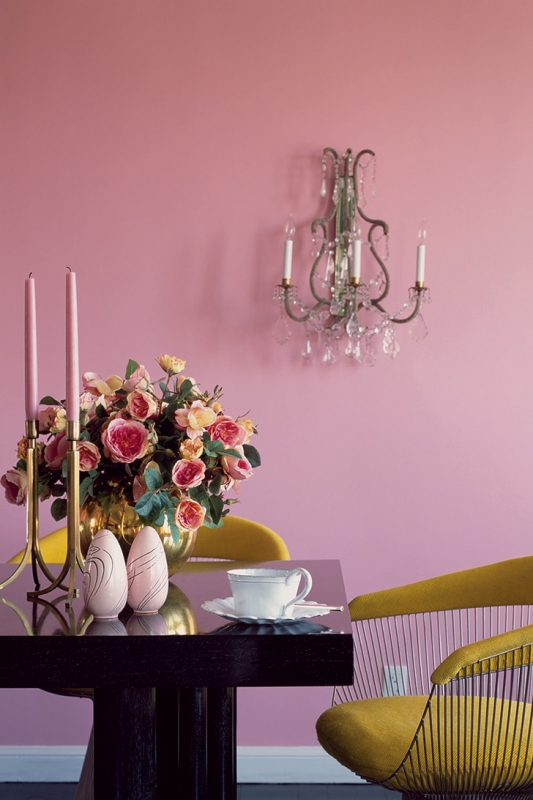 The living room is illuminated by the Artichoke chandelier, designed by Paul Henningsen for Louis Poulsen. Shifted benches, designed by George Nelson for Herman Miller, act as a coffee table. Sofas – from Jonathan Adler. “I just love them — they feel real Hollywood chic,” says the hostess.

As a child, Johnson studied choreography. She recalls that she was equally attracted to dancing and lush tutus with pink ballet flats. The second hobby turned out to be stronger. In 1964, she won the Mademoiselle magazine design competition, moved to New York and took up fashion professionally. At the same time, Betsy met Andy Warhol and found herself in the thick of the bohemian crowd. 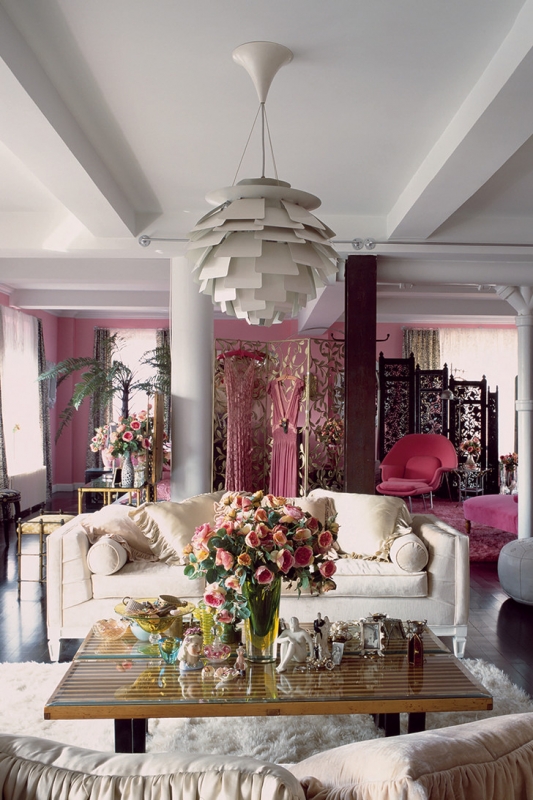 A fragment of the dining room. Platner chairs, designed in the 60s by Warren for Knoll, were found in an antique store.

She dressed the members of the Velvet Underground band (and was even married to one of its founders, John Cale, for several months). Twiggy and Verushka paraded in her dresses. But the main muse of the fashion designer was the legendary Edie Sedgwick, who became the “face” of her boutique, which opened in 1969 on the Upper East Side. It was in Johnson’s clothes that Edie starred in her latest film Ciao, Manhattan! 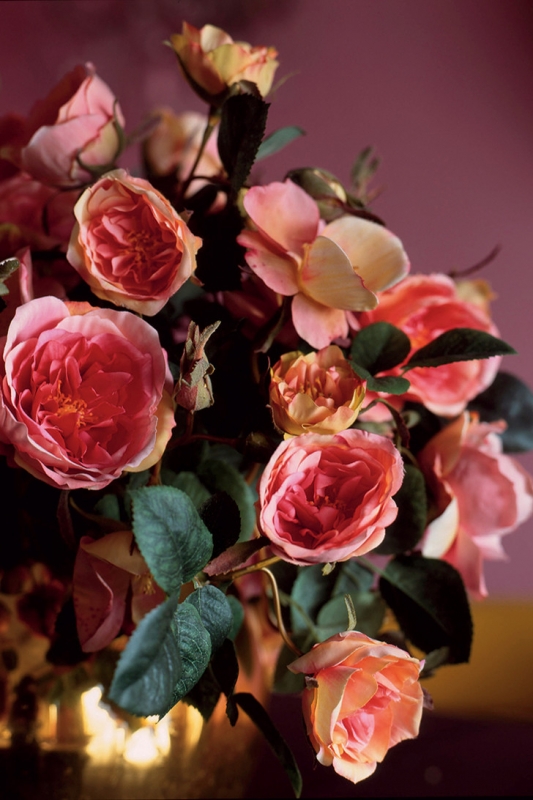 Betsy considers these silk roses to be the best in the world. “Unfortunately, they have already been discontinued. I was lucky: I bought up everything that was left!”

Shocking has always been Betsy’s signature technique. In 1966, she made a real stir by sending supermodel Penelope Tree to an appointment with writer Truman Capote in an open dress consisting of four strips of fabric fastened with thin straps. And today her outfits are worn by the most scandalous personalities – Courtney Love, Kate Moss, Paris Hilton. 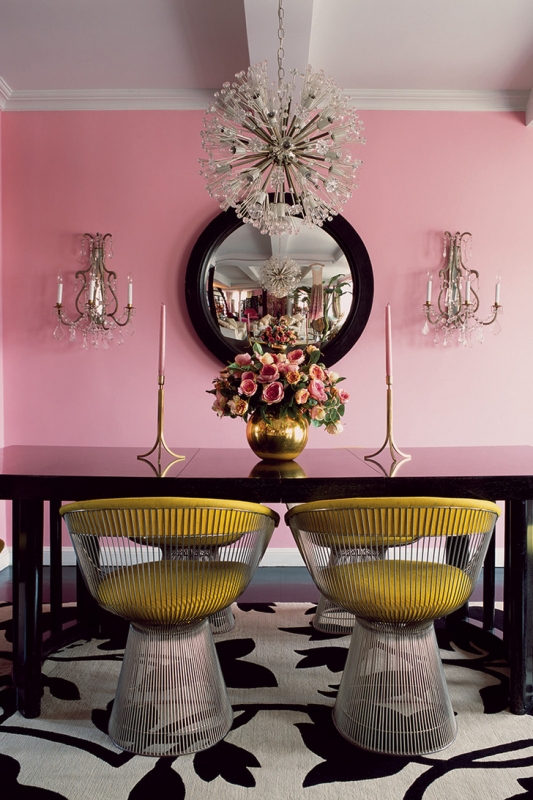 “I am a frequent guest at flea markets and garage sales,” the owner of the apartment admits. It was there that she found furniture and lamps for her dining room.

However, there are also less odious characters among her admirers: Sienna Miller, Scarlett Johansson and Helena Bonham-Carter. In the end, Johnson’s clients have always had a choice — those who do not like frank microshorts made of metallic fabric can choose a touching dress lavishly decorated with lace and embroidery. 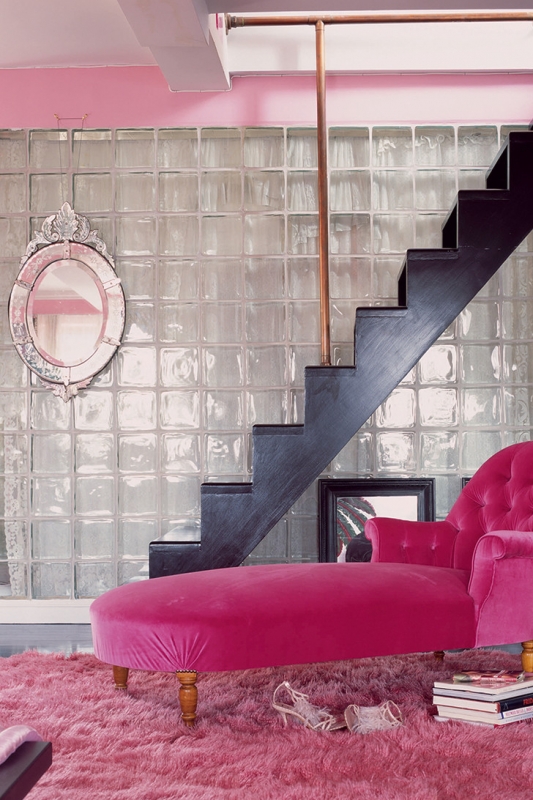 Recreation area under the stairs. An unexpected combination: glass blocks plus a Venetian mirror.

A girly pink color has long been strongly associated with the name Johnson. No collection of the Betsey Johnson brand can do without it, but, oddly enough, it appeared in the designer’s New York residence not so long ago. In order for the interior to find its current appearance, the hostess had to suffer a lot. 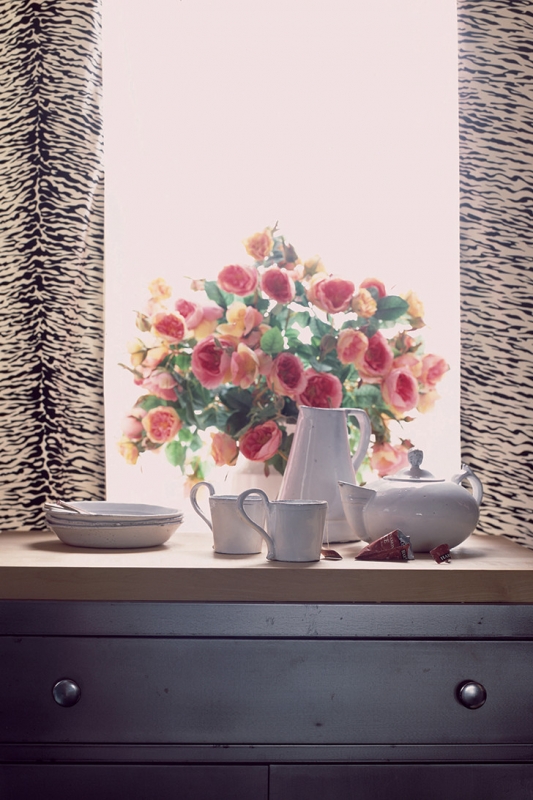 Another ambiguous pair: “predatory” curtains plus curtains made of antique lace.

Betsy has always loved flea markets, antique shops and garage sales. She dragged the treasures she found there indiscriminately to her apartment, which looked more and more like a junk shop every day. “I worked day and night, so I just didn’t have time to do serious housework,” Johnson says. One day she discovered that her home had turned into a dump. I had to gather my will into a fist and start putting things in order. “I decided that with my lifestyle, a simple modern interior would suit me better,” the designer recalls. 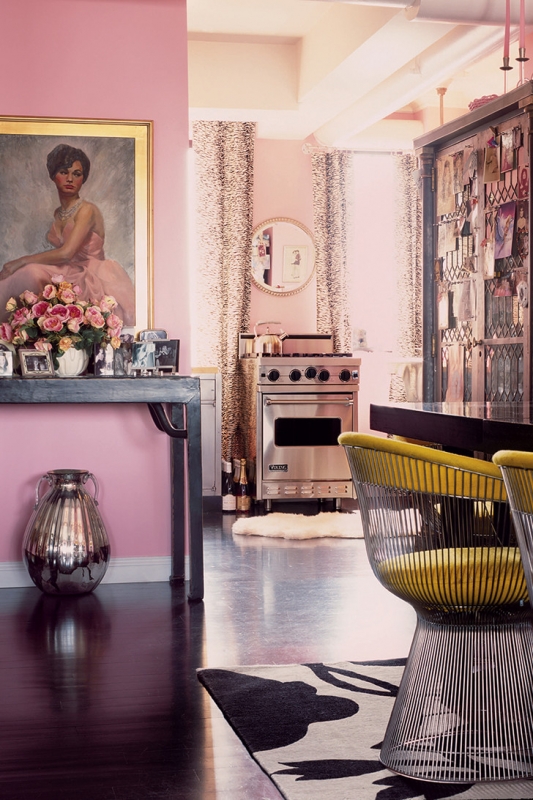 The hostess keeps kitchen utensils in an old metal cabinet. Its glass doors are covered with a transparent lace fabric, leaving the contents in plain sight.

To begin with, she moved most of the old furniture to her Villa Betsey home in Mexico. Then she made another raid on antique shops, where she bought several iconic design objects of the mid-twentieth century (they had to take the vacant place). To top it all off, Betsy repainted the cheerful yellow walls of her apartment in white: “Frankly, I did it without thinking about the consequences at all.” However, after a couple of weeks, she felt that she was slowly going crazy — minimalism absolutely did not match her bright temperament. 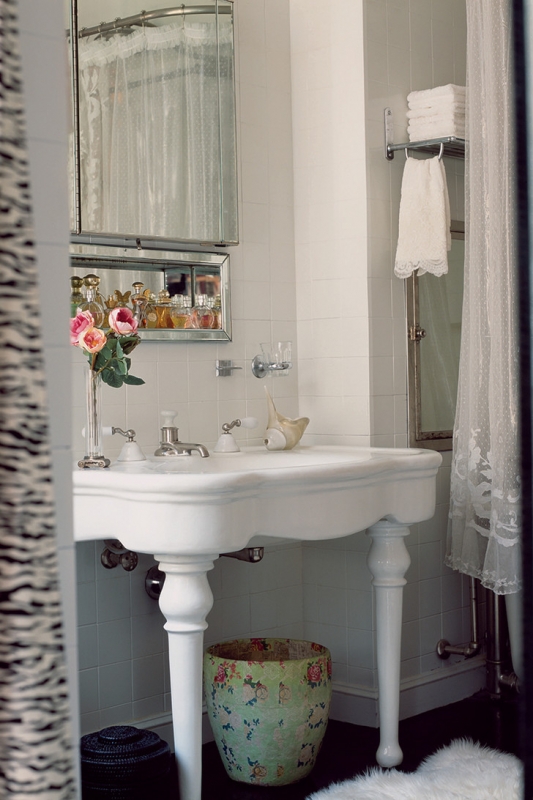 The bathroom is the only room in the house that has remained white. A classic sink and a lace curtain for the bath are designed to soften the strict image.

Betsy was completely satisfied with the furniture, but the background… There was clearly not enough life in the apartment: “I constantly need emotional nourishment. That’s why I love works of art, old photographs and antiques so much.” As a result, she took up the brush again and repainted the walls – this time in pink. “That’s when the interior started playing!” – the hostess does not hide her satisfaction. Then she gave free rein to her unbridled femininity and filled the apartment with silk roses, crystal candelabra and kilometers of antique lace. “Without the lace, there was a completely different atmosphere here,” Betsy says, pointing to the large windows overlooking the city. 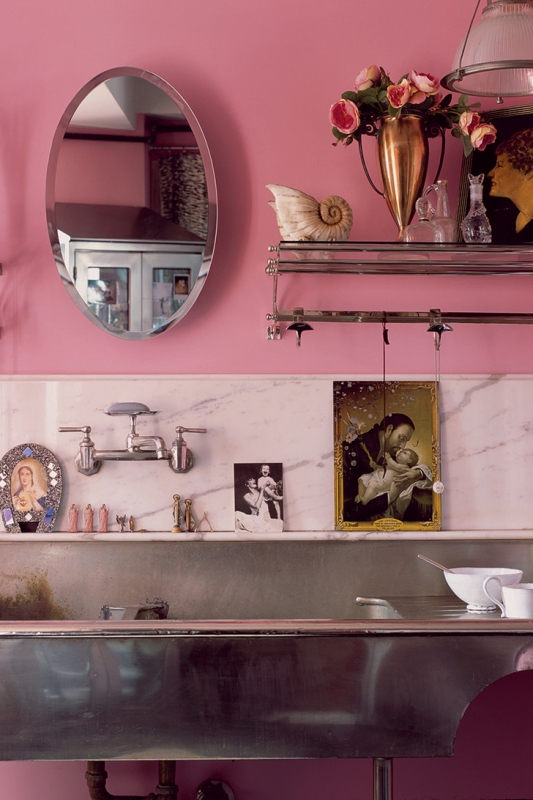 A fragment of the kitchen. The galvanized sink, surrounded on all sides by figurines and pictures of religious content, looks like an iconostasis.

The result of Betsy’s decorative efforts looks paradoxical. On the one hand — figurines-frills, on the other — furniture of great designers who extolled the function and were ardent opponents of decoration. It is possible that Eero Saarinen turned over in his coffin when Betsy was pulling his Womb chair with a crazy pink fabric! But the landlady does not care much about this. In her interpretation, even the kitchen sink turns into a hybrid of a dressing table and an altar. Because excessive decor for Betsy Johnson is not a crime, but the norm of life. 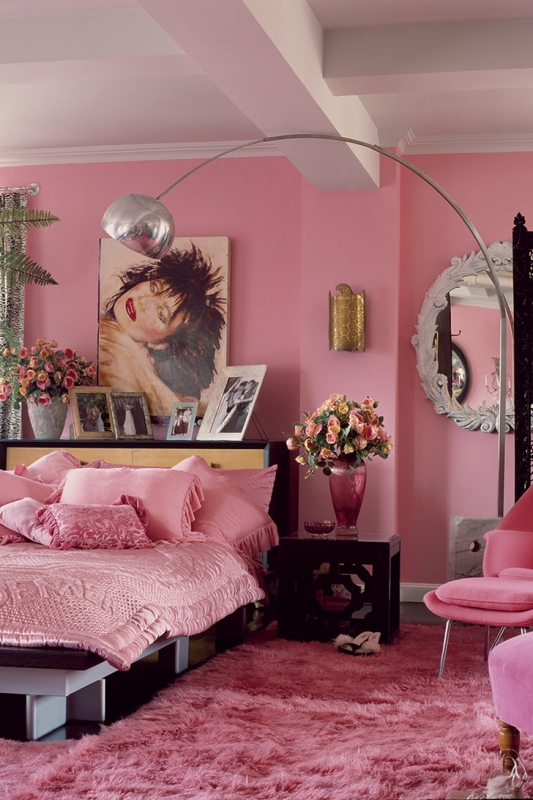 The bed, designed by Peter Mali for Ligne Roset, is covered with a pink satin bedspread from the London store Coco de Mer. Pink carpet with high pile is made to order at ABC Carpet company & Home. Agso floor lamp, designed by Aquille and Pier Giacomo Castiglioni for Flos.

R. S. If you like this interior, but you are not sure that you are ready to live in such a space day after day, conduct a reconnaissance by combat. Betsy Johnson recently bought an old hotel in Mexico City and turned it into a boarding house for 8-10 guests. The interiors of this institution are decorated in a similar way. 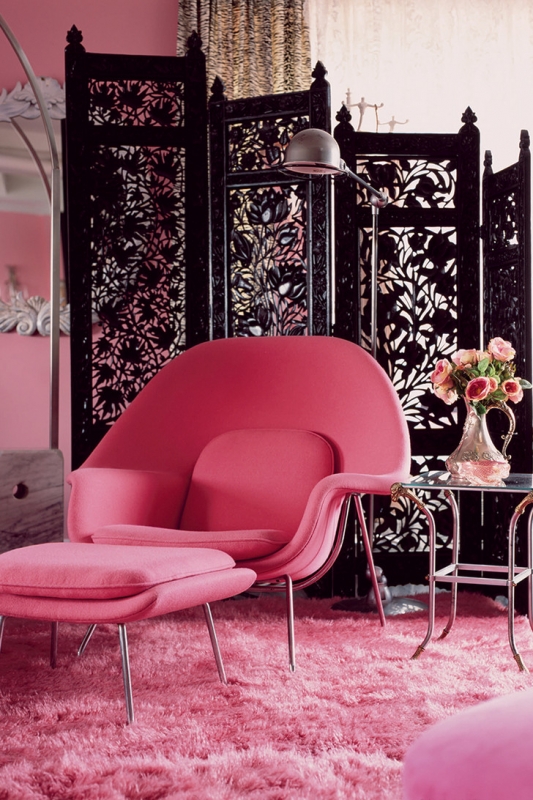 A fragment of the bedroom. The Womb chair and footstool created by Ero Saarinen for Knoll are covered with pink fabric. Betsy bought the carved screen at an antique exhibition: “Initially it was blue, but I decided to repaint it — in the black version it looks more impressive.”