Irina Bebeshina and Anastasia Gurina share their experience of kitchen design in an open-plan environment and a small number of square meters. 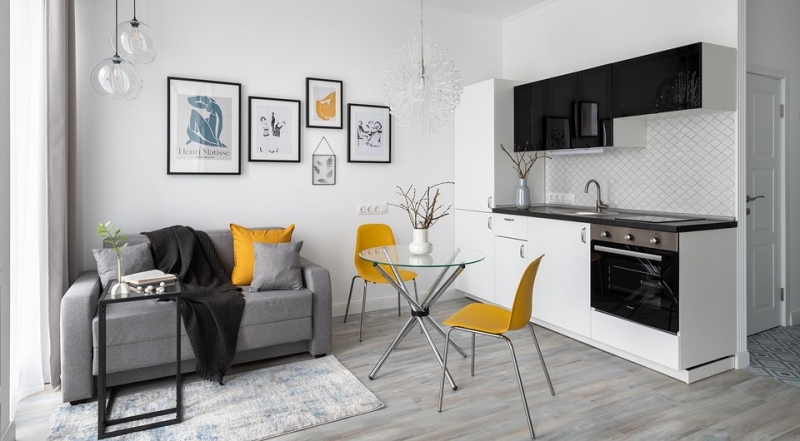 1 Headset as the basis of the interior

Irina Bebeshina rightly notes that in the open space of the studio, the kitchen can be seen from everywhere. Therefore, it is important to pay attention to its design.

The kitchen set in the studio is inextricably linked to the entire concept of the interior. One part of the common space flows smoothly into another. Therefore, in my opinion, it makes sense to make a custom kitchen in order to rationally use every centimeter of the available space. 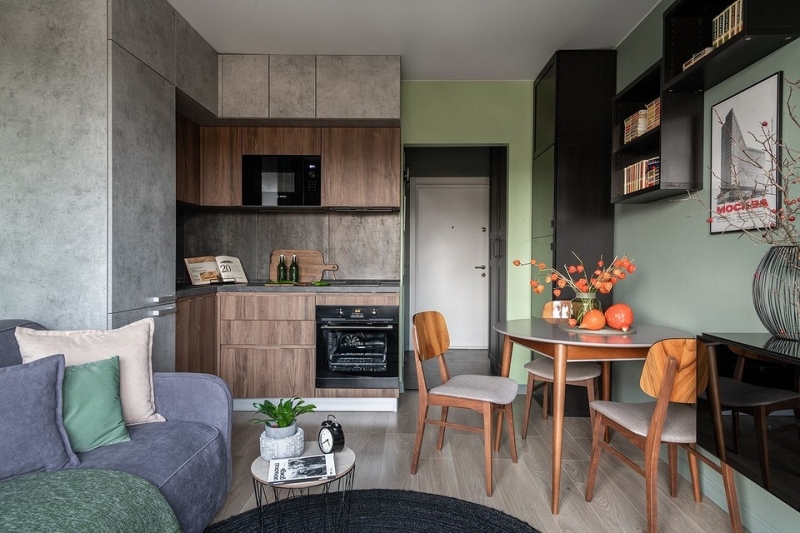 Of course, to the minimum that is convenient for you. According to Irina Bebeshina’s experience, not all studio owners need an oven, as a rule, 1-2 people live in the apartment, and for them this house is a place of rest only in the evenings. The same thing about the dishwasher often one person prefers to wash a couple of plates by hand than to take up space and expand the headset. The microwave, additional devices and so on are also questionable. “It’s worth thinking twice about what household appliances you really need in the kitchen,” Irina insists. 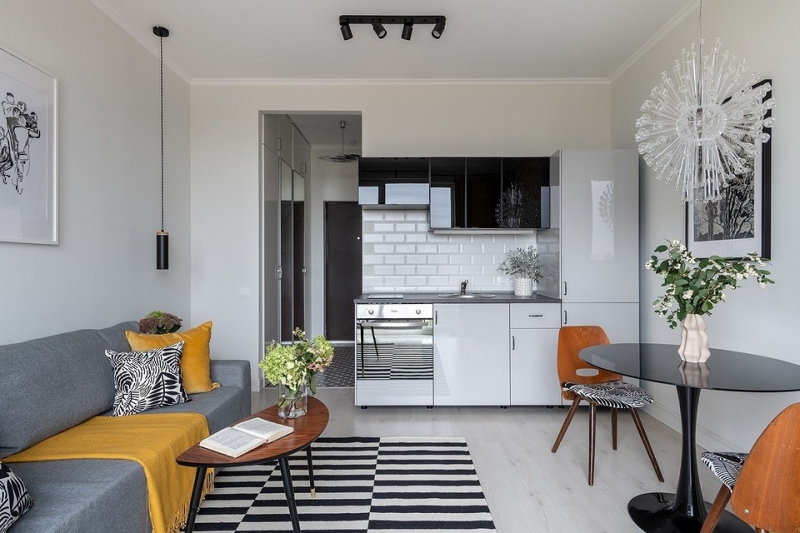 Anastasia Gurina destroys the stereotypes that the island is relevant for large apartments and country houses and recommends using it even in the studio.

The peculiarity of studio design is competent zoning and maximum ergonomics. My favorite technique is to make a part of the kitchen into a functional island. In the studio, made according to our project, an island with a hob and a hood above it becomes the functional accent of the room. Additionally, it serves as a dining area. They also placed storage modules in it. 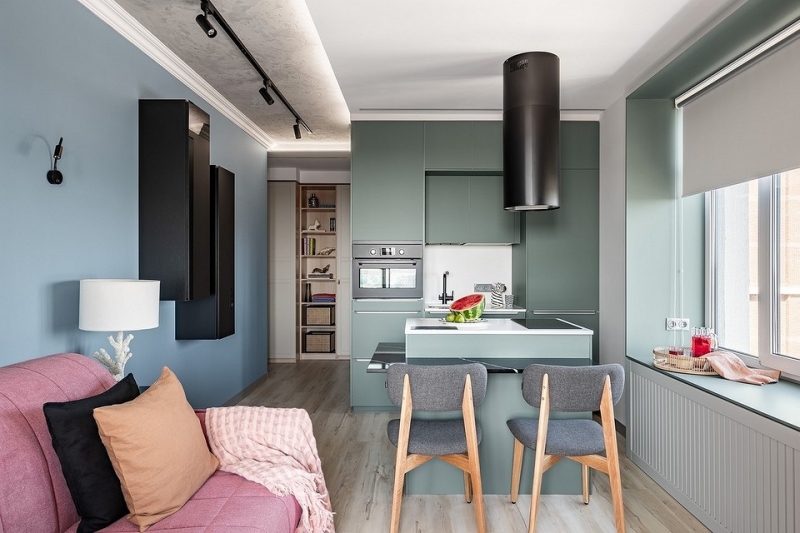 4 Bar counter instead of table

This decision is justified by the small area and the fact that no more than 1-2 people live in the studios.

“Firstly, the bar counter can be part of a kitchen set, which allows you to significantly save space. Secondly, such a solution often looks very stylish and allows you to zone the space well. Thirdly, most studio owners are young and energetic people. They are not set up for long family dinners, but prefer to have a quick snack and run about their business,” Irina Bebeshina believes. 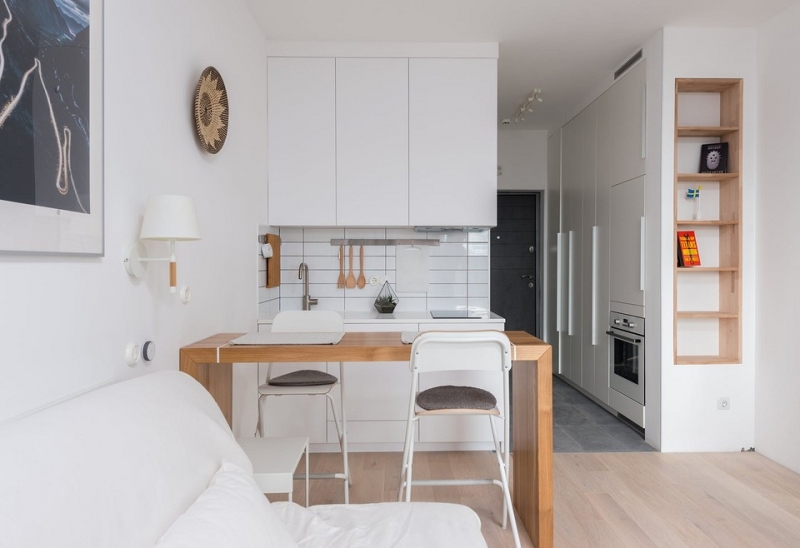 Anastasia Gurina urges to keep order and strive for conciseness in the kitchen in the studio.

“This is the key to the successful integration of the kitchen into the common space of the apartment, says the designer.  In our project, all the necessary appliances (refrigerator, dishwasher, oven, microwave and sink) are built into the main part of the kitchen, located compactly along the wall from floor to ceiling and hidden behind plain facades. This technique allows you to visually increase the area of the apartment.” 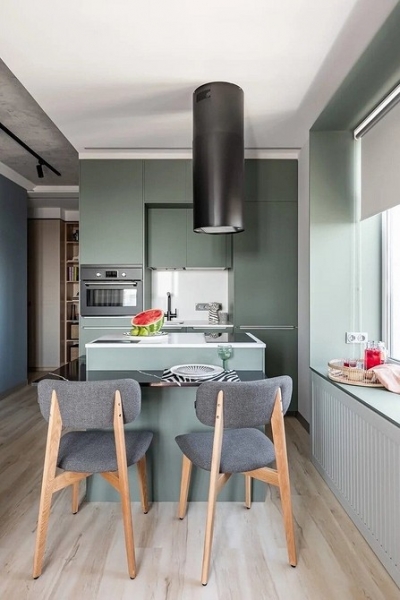 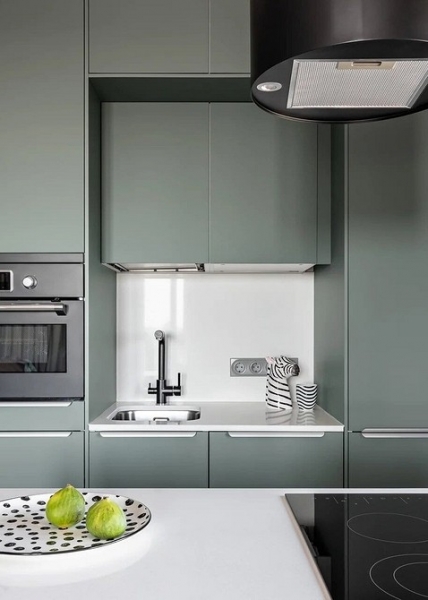 In recent years, the mezzanine in the kitchen can be called a trend. And it is explained simply the less space, the more storage space is needed.

“Now it is a very popular design technique to make the upper cornice of kitchen cabinets or to make high hinged cabinets directly into the ceiling, says Irina Bebeshina. Such solutions are very relevant for the studio. Apartment owners often use the top row of lockers as a storage area for rarely used items, sometimes even blankets and pillows).” 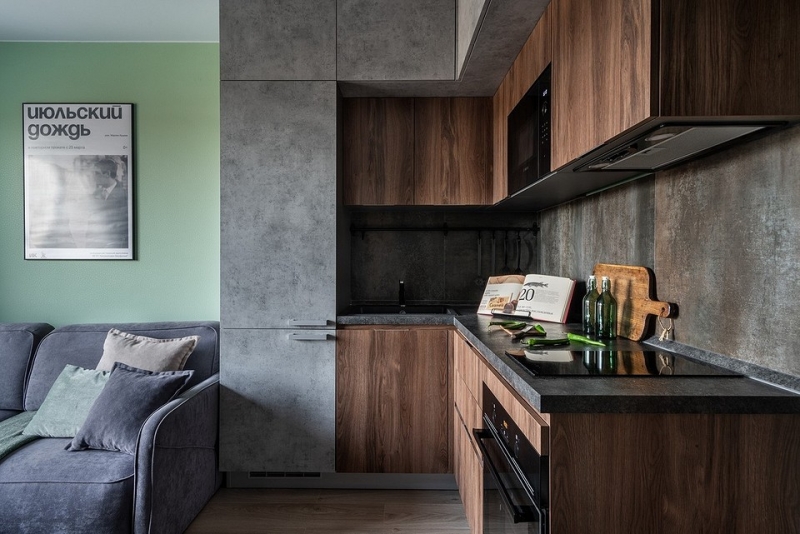 If the kitchen area is located near the window in the apartment, Anastasia Gurina calls for using this space as well. In her project, this is a recreation area.

“In a small apartment, every centimeter of the surface is appreciated, so even if you have narrow window sills, they can be enlarged and decorated as a relaxation zone and a place to eat with a view of the city,” the designer recommends. 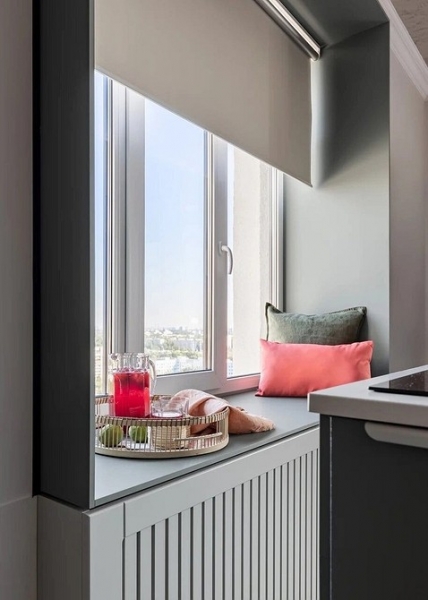 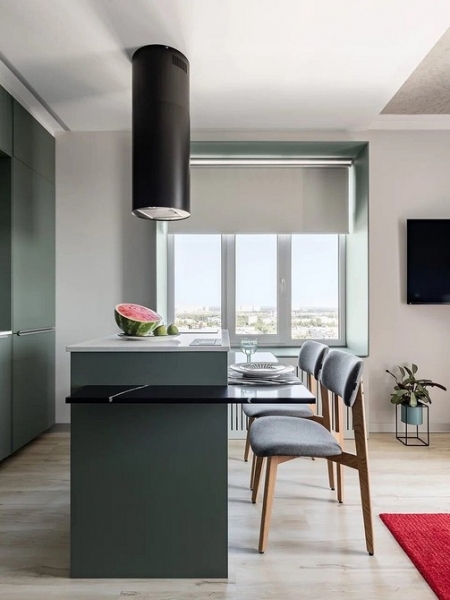 Also, the window sill in the kitchen area can be made a continuation of the headset or a bar counter for eating.

8 Many scenarios of light

Even in a small kitchen, even in the studio. Irina Bebeshina believes that it is more important to think over lighting scenarios in this area than anywhere else in the apartment.

“Naturally, there should be a good general overhead light, for which spots or track lights are usually responsible now. It is important to provide illumination of the working area. The illumination of glazed lockers looks nice. And the cherry on the cake will be accent lights over the table or over the bar counter,” Irina recommends. 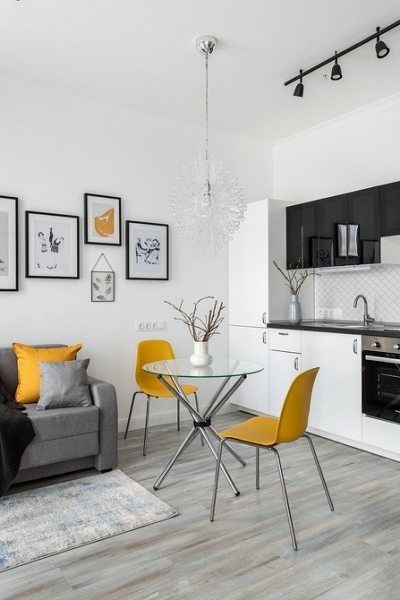 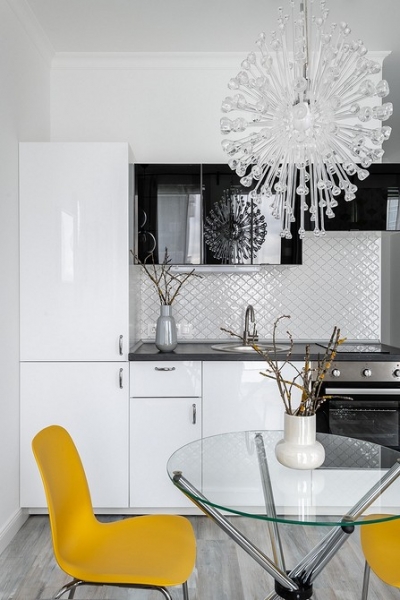