Natalia and Ivan Trofimovs, the Blockstudio bureau, designed a snow-white apartment in the center of Moscow and showed how to create a feeling of incredible lightness of being on an area of only 43 square meters with the help of a competent layout, mirrors and interior windows! 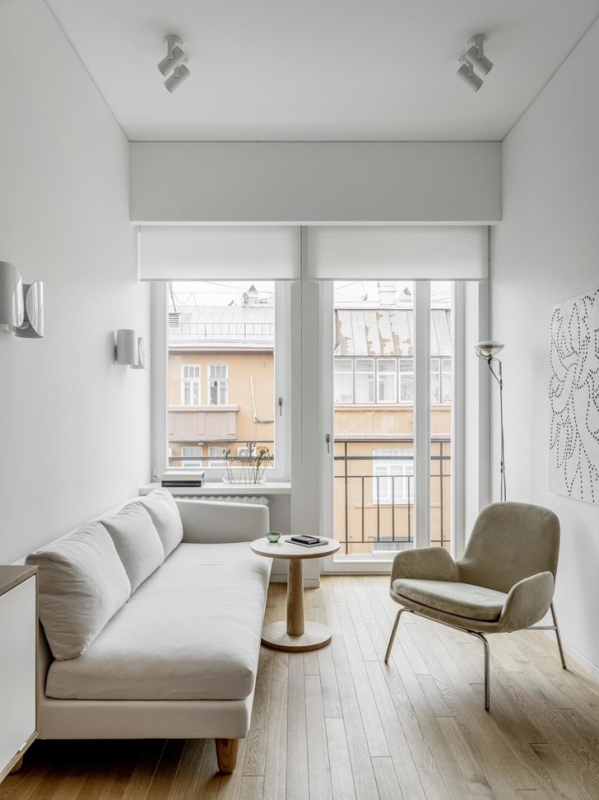 A sofa with one armrest, Joquer, does not visually divide the room into a dining room and a living area. The table is the work of Dmitry Samygin. Foglio sconce and Toio floor lamp, Flos. Armchair, Normann Copenhagen. Window handles, Bisschop. Panel by Igor Shelkovsky, @alinapinskygallery

The apartment is located in a small house of old construction near Tverskaya Street. Ivan and Natalia Trofimov, the Blockstudio bureau, came here at the stage of buying real estate. “Alexey, the owner of the apartment, was dressed in black from head to toe,” the architects recall. — As it turned out, this is his favorite color. But one glance at the space was enough to decide: the interior will be very light, airy and definitely total white!” 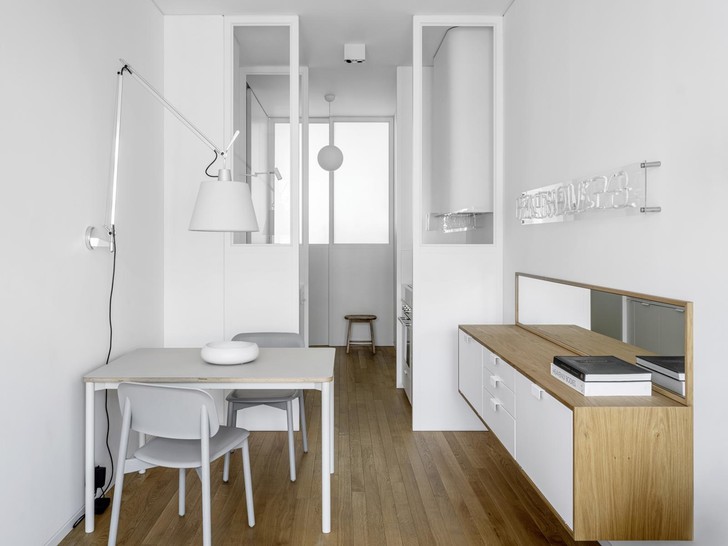 View from the living-dining room to the walk-through kitchen. The hanging sideboard with a mirror located at eye level of the person sitting at the table is made according to sketches by the Blockstudio bureau. Dining table, @dmitrysamygin. Soft Edge chairs from Hay. Tolomeo swivel sconce from Artemide. Stool, Zara Home.

“At first, we even joked that it would be easier for him to look for black things scattered around the apartment. However, the owner himself is incredibly neat, and the interior, completely painted white, does not look completely white due to reflexes from the facades of neighboring buildings. During the day, the walls of the living room acquire a warm ochre shade. It is given by the reflection of the house standing opposite, the facade of which resembles the buildings of the historic district of Copenhagen Nyboder, to which both we and the customer have the most tender feelings.” 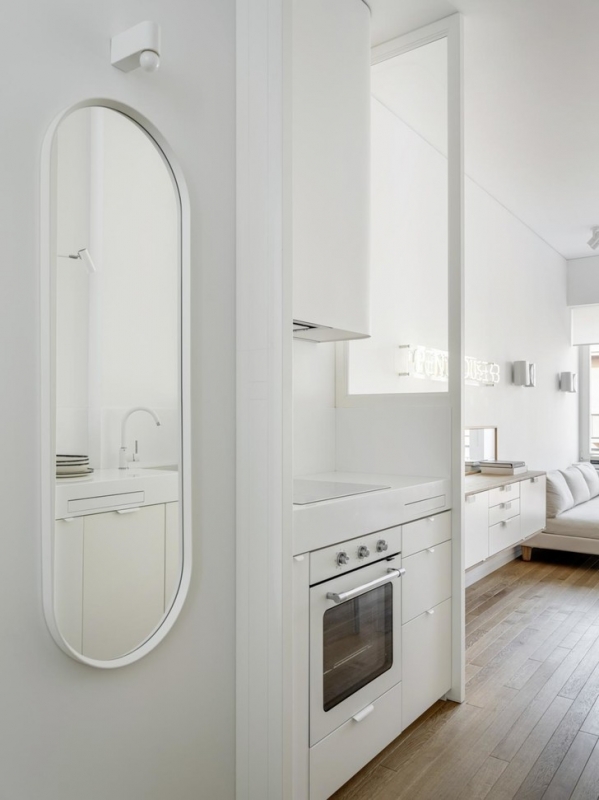 View from the entrance hall to the entrance kitchen and living room. The kitchen hood is built into a metal box. Mirror, Menu. Bra, Michael Anastassiades. 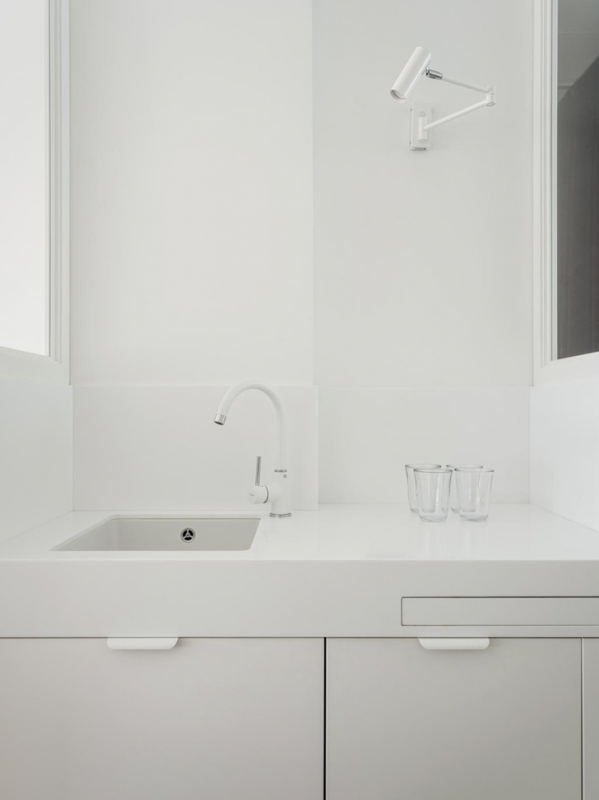 The kitchen area is only 2 sq. m. m is separated by interior windows from the living room and hallway. Additional retractable surfaces are provided in the countertop.

And yet at some point there was so much white that the interior began to look like a Catholic school. “All that was missing was a crucifix above the bed,” Alexey joked. And then new color accents appeared. “We decided to add a dark blue color and painted a niche with it, accidentally discovered in the bedroom during construction, made blue panels on the facades of cabinets,” says Natalia. — A red velvet curtain appeared in the dressing room at the entrance — our homage to David Lynch’s Twin Peaks. To complete the picture, we hung two mirrors opposite each other, which created the effect of an endless red enfilade.” 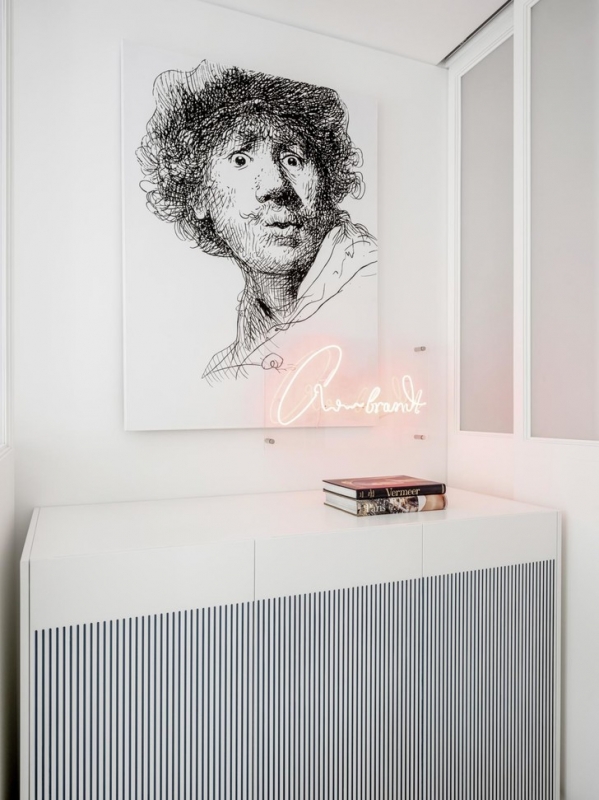 Hall in front of the bedroom. The chest of drawers is made according to the sketches of the Blockstudio bureau. On the wall is a copy of Rembrandt’s self-portrait, illustrator Diana Kustova, @dikusto. Neon “autograph”, @homeneon. 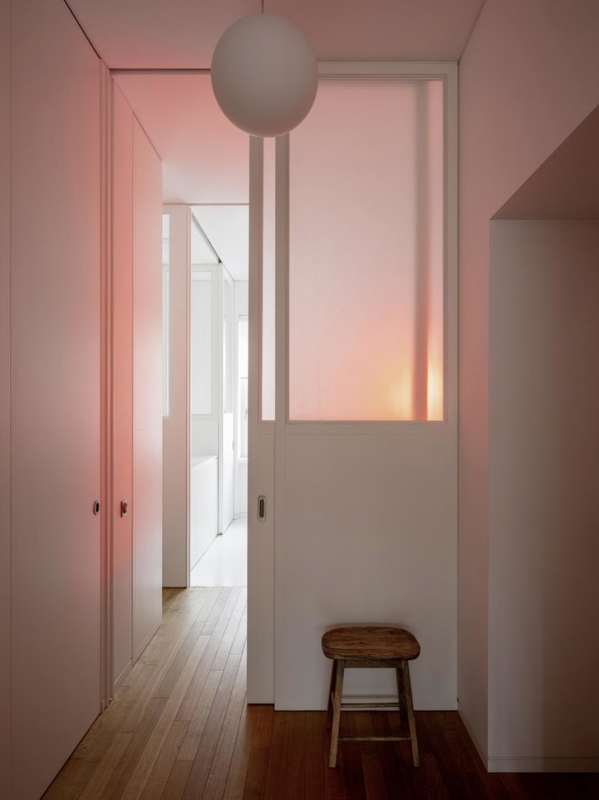 A sliding partition with frosted glass lets natural light from the bathroom into the hallway.

Furniture is the bare minimum, so each item was strictly selected. The main criteria were the absence of a pronounced design and super-comfort with a compact size. To visually expand the dining room, the architects designed a buffet with a mirror located at eye level of the person sitting at the table. At Alexey’s request, a Rembrandt self-portrait appeared in the hall — the famous engraving on an enlarged scale was transferred to the canvas by illustrator Diana Kustova. The signature, also at the request of Alexey, was made of glowing neon. 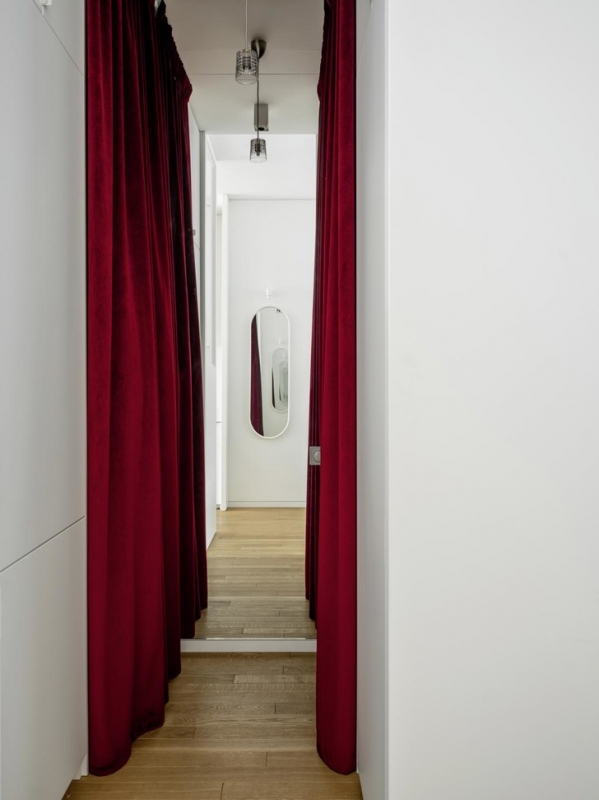 Hallway. On the left is a closet with a built-in refrigerator and a wardrobe for outerwear behind a velvet curtain. On the right – a hidden sliding door from floor to ceiling leads to the bathroom. Door handles, Olivari. Technical light, Aledo.

“The furniture is the minimum, so each item was strictly selected” 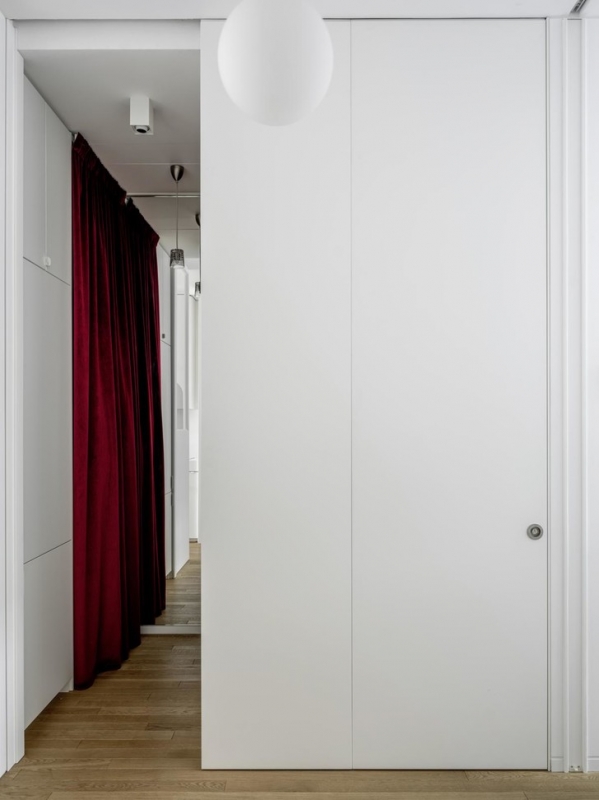 Dressing room in the hallway. A mirror hanging in front of another mirror creates the effect of infinite perspective.

But the most interesting thing in this project is the layout, made without a single blank wall! All zoning of the space is done due to partitions with glass and compartment doors. “Thus, we managed to save space and maintain transparency by letting natural light into absolutely all areas of the apartment,” the architects say. – Thanks to the windows facing on two sides, the private and public parts of the apartment are clearly separated.” 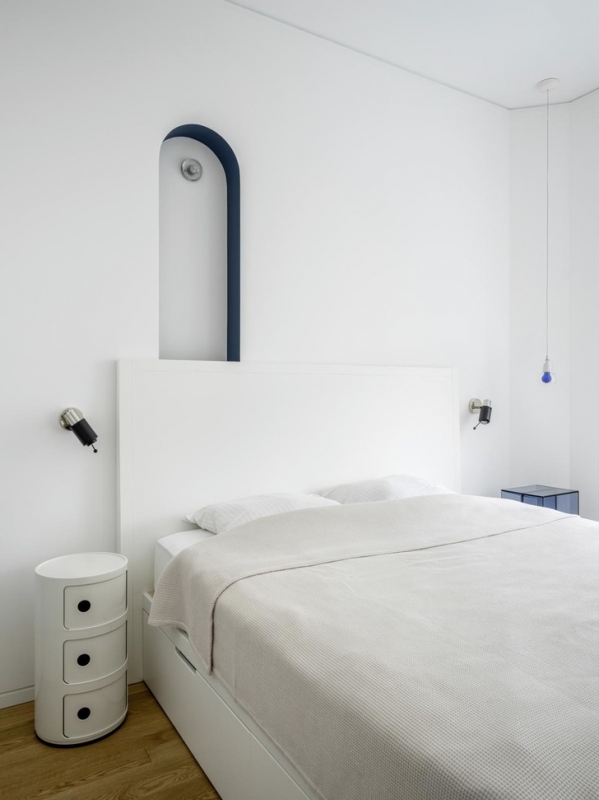 Bedroom. The arch, accidentally discovered in the wall during the repair, was beaten with contour painting and sconces from Bocci. Black sconces, DCW. Bedside tables, Kartell. Hanging Lamp, &Tradition.

“A bathroom with a window is fine, but we managed to make it even with two windows. Alexey jokingly called the walk-through kitchen with an area of only 2 sq. m. a “kitchen probe”, and now he pleases us with stories about what complex dishes he cooks here, what an incredibly light feeling of life he experiences every time he comes home, and a separate point — how conveniently large closets for black clothes are organized.” 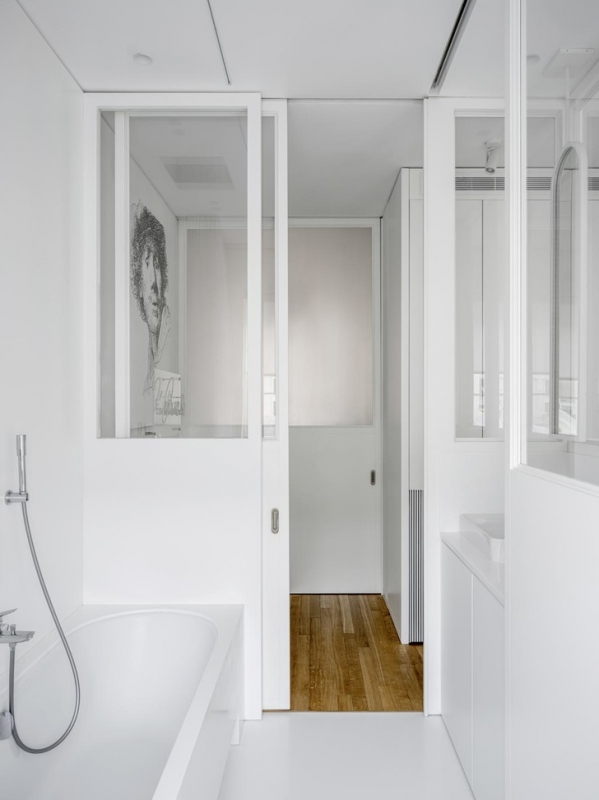 Bathroom. So that nothing breaks the laconic image, the upper shower and curtain rod were built into the ceiling. Plumbing, Duravit. Steel bath, Kaldewei. Shower and faucets, Hansgrohe. Door handles, Olivari. 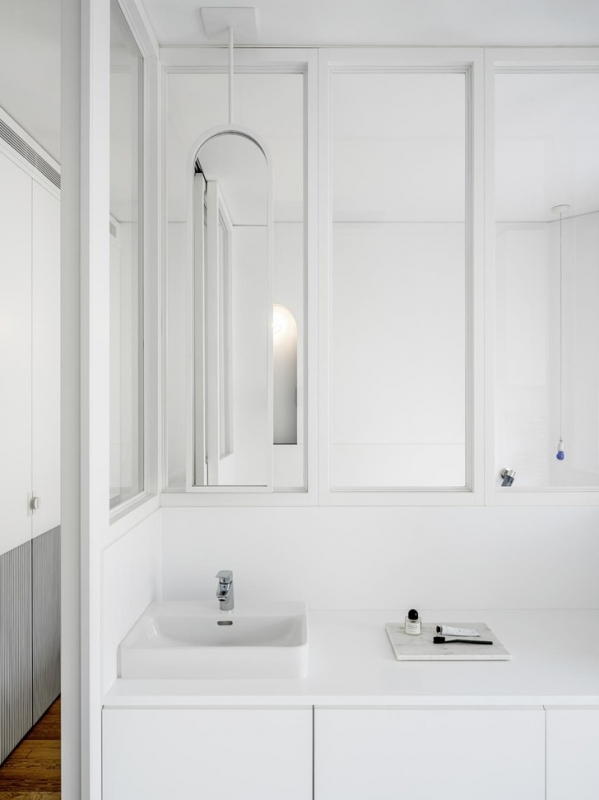 The bathroom is separated from the bedroom by a glass partition. The custom-made hanging mirror echoes the shape of the arch in the bedroom.