Designers from the studio F17Design have created a cozy, Parisian interior in an old St. Petersburg apartment on the banks of the Neva River 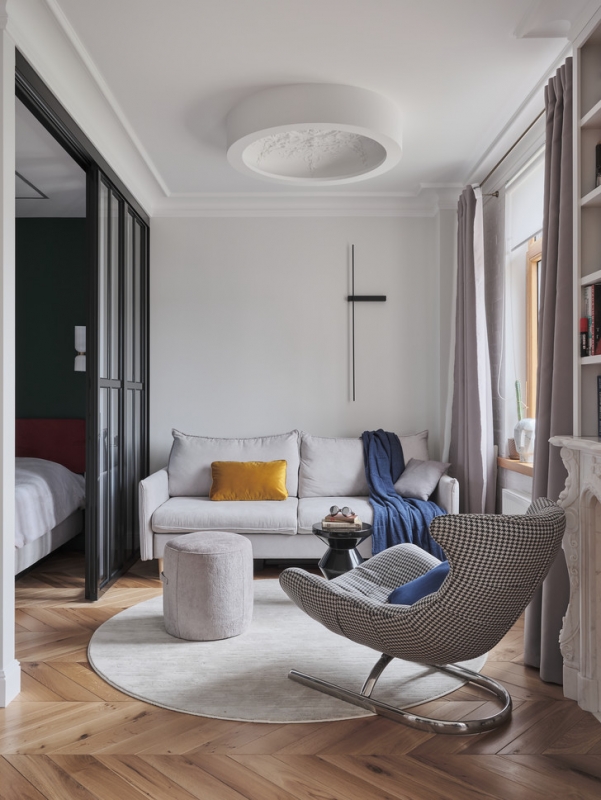 Poof, Rondo. Carpet, Ragolle. The plaster chandelier is made to order according to individual sketches of the author of the project. Wall lamp, Viokef. Pillow on the sofa, Eichholtz.

The customers, a young, active, intelligent couple— are true Petersburgers. They are both creative and inquisitive, and their work is inextricably linked with the life of the city and art. “They liked the atmosphere of Parisian apartments — a lot of light, air, simple but elegant decoration, old parquet and calm but bold interior filling,” says the author of the project. – From interesting wishes customers – they needed a recess for the legs in the stitching of the bathtub, a horizontal bar, a “Mona Lisa” from the IKEA and Off-White collaboration and a large plaster chandelier. It was also important to organize the placement of a large number of books and hide all the storage places behind the facades.” 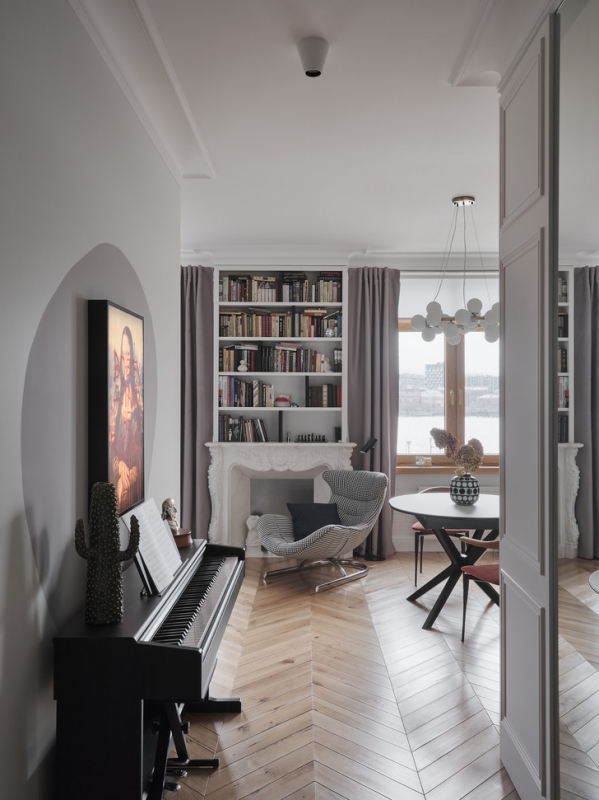 The task facing the designers was not easy. On an area of 48.4 square meters. meters, it was necessary to organize a comfortable space for two people and at the same time avoid cutting the space into small rooms. Among the wishes of the customers was a separate sleeping area with the possibility of isolation, a kitchen that would not be too conspicuous and would not eat up all the space, but at the same time had enough storage space, and a full bath in the bathroom. “This has become a real challenge for us,” the authors of the project admit— “but in the end, now, more than six months after the completion of the repair, customers are very satisfied. Every centimeter of space is used to the maximum.” 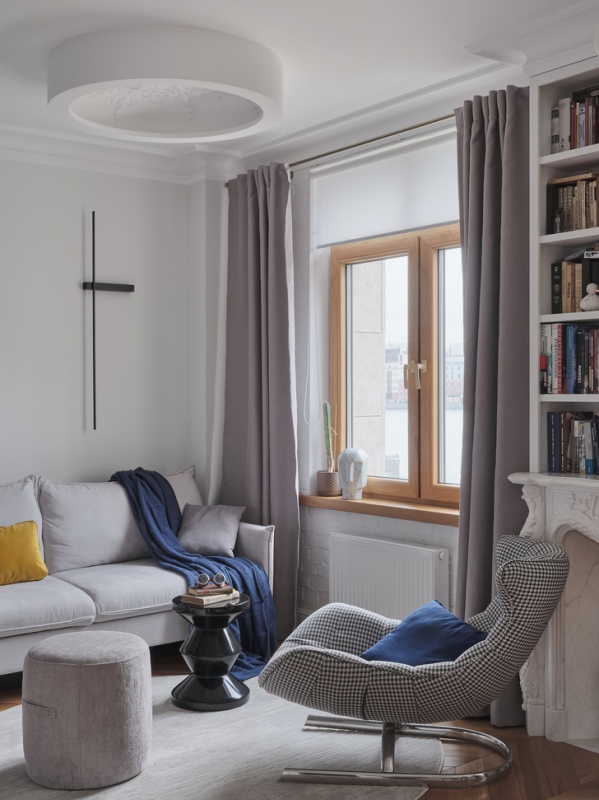 Stool, Pols Potten, Bulthaup Gallery. The plaid was knitted by the customer’s mother.

The owners of the house like to receive guests, so there is a folding sofa in the living room, on which a large company can fit together to watch a movie or play board games. The large coffee table had to be abandoned, replacing it with a small, light stool that serves as a coffee table. But a large reading chair resembling a lobster was not originally planned and appeared almost by accident, but it fit perfectly into the interior of the living room. 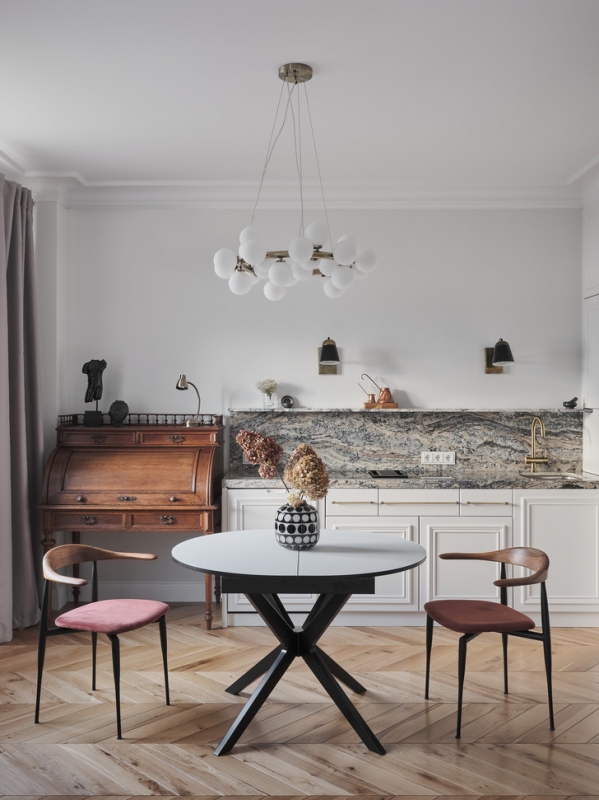 “We have been looking for a reading chair for a very long time. The customer had to test each “candidate” personally,” the designers say. — As a result, none of the proposed options seemed comfortable enough, and if they were “interviewed”, they did not fit the interior stylistically at all. Somehow, passing by a completely unfamiliar store, we saw this very chair, and everything worked out — both we and the customer liked it.”

Another unusual item in the interior is an antique bureau, which was searched all over Russia. “There was not enough space for it, and we were clearly tied to the size, which is always difficult in the case of antiques,” the authors of the project say. 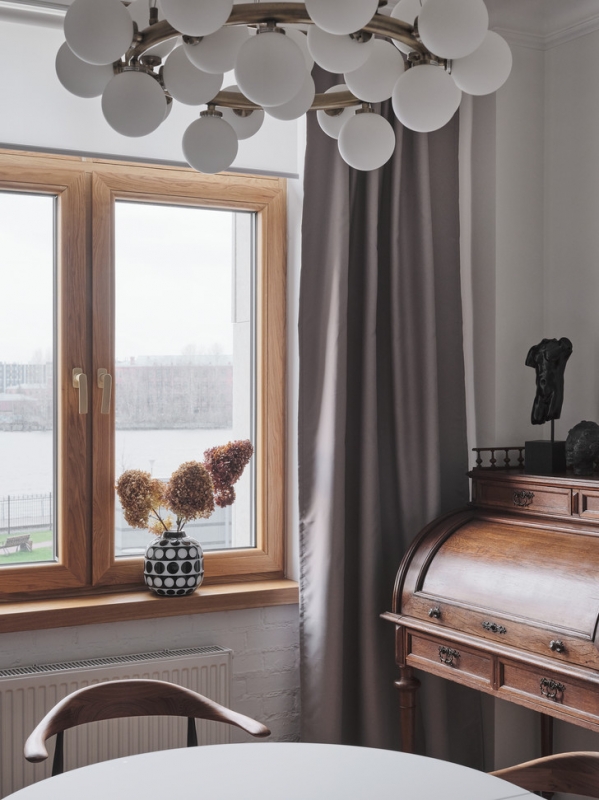 The kitchen, as the customers wanted, turned out to be visually light and not bulky due to the white facades and the absence of upper cabinets. But that doesn’t make her plain. On the contrary, the kitchen apron and countertop immediately attract attention. “Initially, the stone was planned to be different: light, neutral tones,” the designers say. — But when the customers came to choose slabs, they were captivated by a bright, active pattern with gray-blue and sand streaks. We tried it on and realized that such a work of art from nature itself would make the interior much more interesting.” 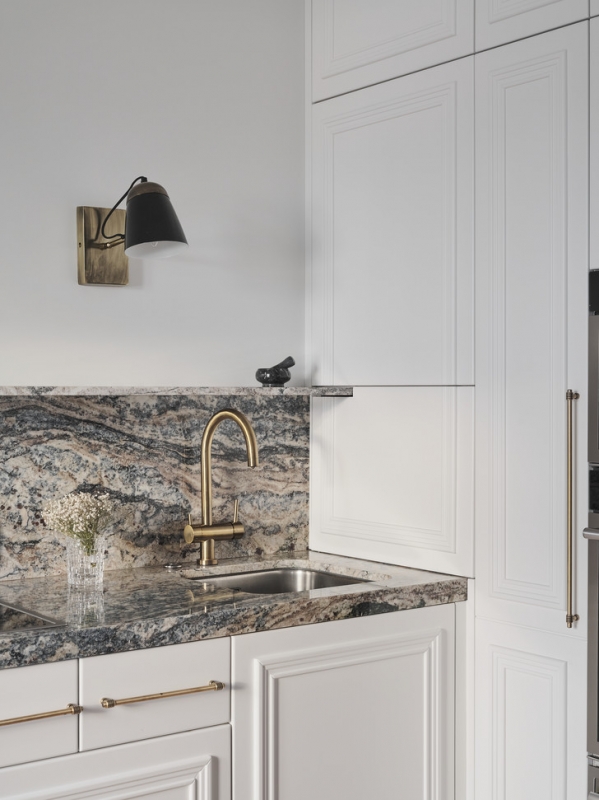 The kitchen is made to order according to individual sketches of the author of the project. Bra, Zuiver.

In the bedroom, the walls were painted in emerald green, which contrasts with the headboard of the bed in a bright ruby color. The room turned out to be small, but functional. It has a built-in bedside table, a side table with an enamel coating, a built-in bookcase and a backlight for soft diffused light under the bed. “We liked the side table in the bedroom very much right away,” the designers say— “but there was only one copy left, and there was one small problem with it: a fly poured into enamel right at the factory. It seemed even funny to us, with such a “highlight” we began to like the table even more.” 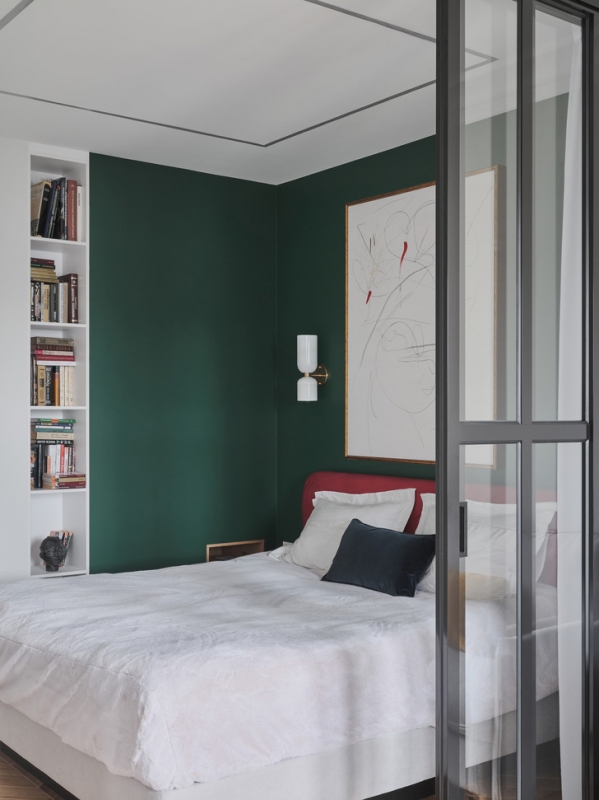 Glass partition, “Partition LAB”. The bed is made to order according to individual sketches of the author of the project. Painting, Alexander Bartov, Aurora Art Gallery. Bedspread, Togas.

The bathroom turned out to be graphic because of the contrasting stripes on the walls, black elegant elements and tiles with a geometric pattern. The designers managed to place here not only a bath, as the customers wanted, but also a full-fledged laundry room. 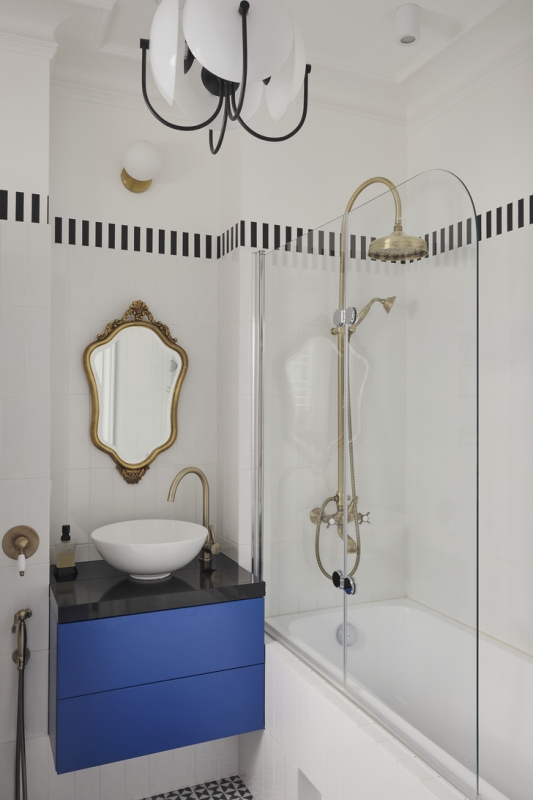 Mirror, antiques. The cabinet is made to order according to individual sketches of the author of the project. Granite countertop, Grand Stone company. Tile, Vives.

The space in the hallway is also used as efficiently and unconventionally as possible — the entrance door is framed by a wardrobe portal, creating a bright arch in which there is a shoe box, drawers for gloves and scarves, a shelf for small things — and all this is not to the detriment of storing outerwear. 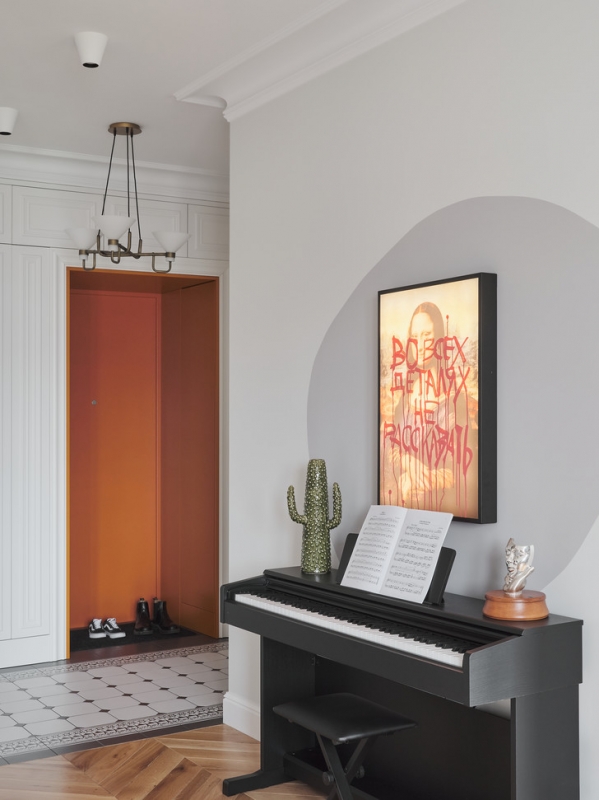 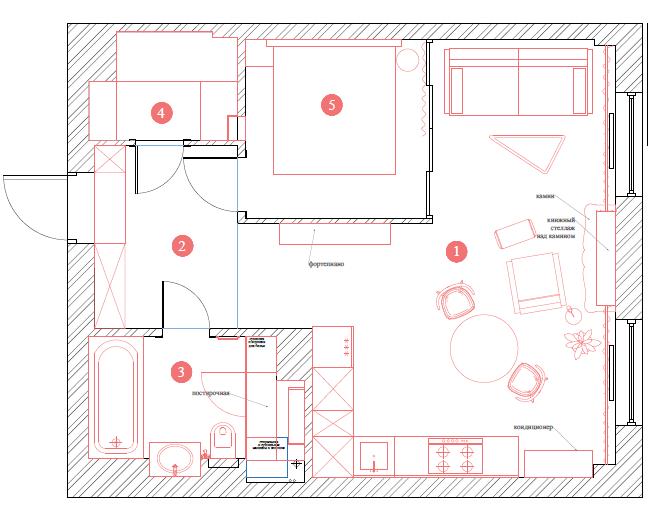 Apartment in St. Petersburg. The project of the studio F17DESIGN.Ekaterina Sobko