Designer Claudia Luchenko designed the interior of an apartment for a young and energetic girl, in which it is calm and comfortable, but not boring at all 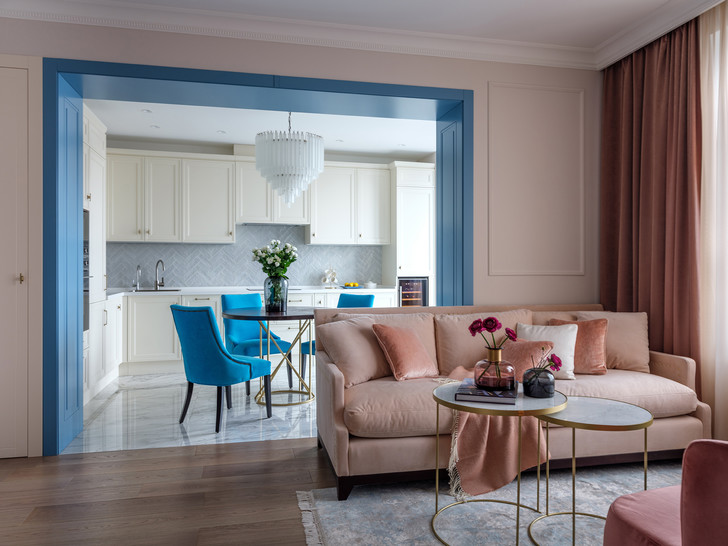 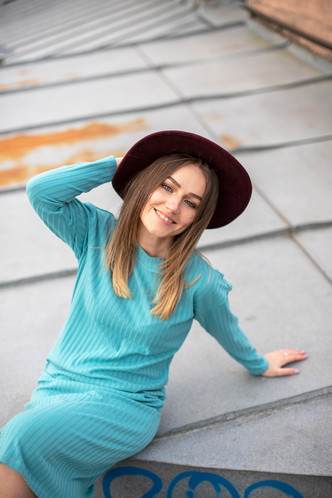 The main idea of the project is to create an atmospheric space for relaxation, filled with juicy shades and unusual details 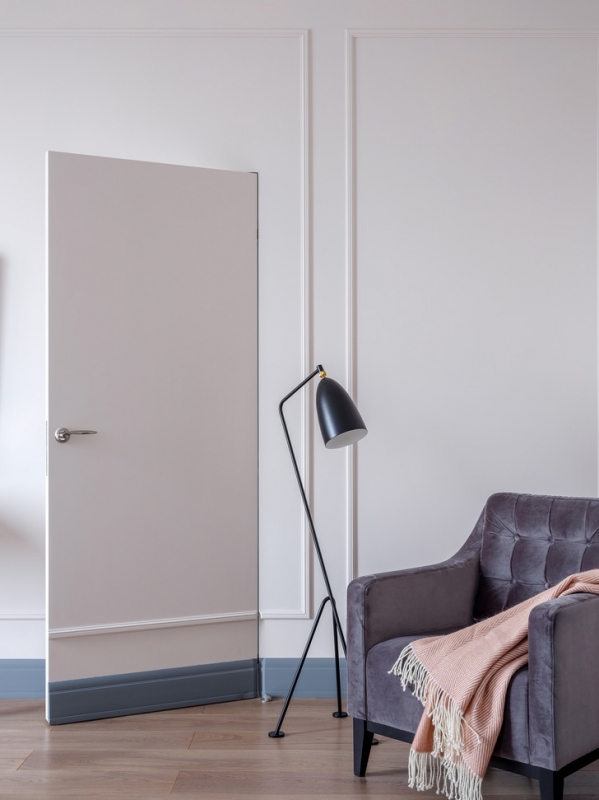 “The living room turned out to be very spacious, but in order for the room not to look like a walk-through, flush-mounted doors for painting were chosen for the bedroom and bathroom. There is a dark gray skirting board on the doors, as if outlining the living room.”

The owner of the apartment is a young girl who works a lot and often goes on business trips. Home for her is a place to relax and meet friends, where it should be calm and comfortable, but not boring. That’s why it was so important to create a cozy and bright interior at the same time, filled with juicy colors and interesting details. Claudia Luchenko, the author of the project, immediately found a common language with the hostess. “When the customer and the designer are on the same wavelength, all the difficulties in the repair process are perceived as a challenge and an opportunity to improve the project, and not as a stumbling block,” she emphasizes. 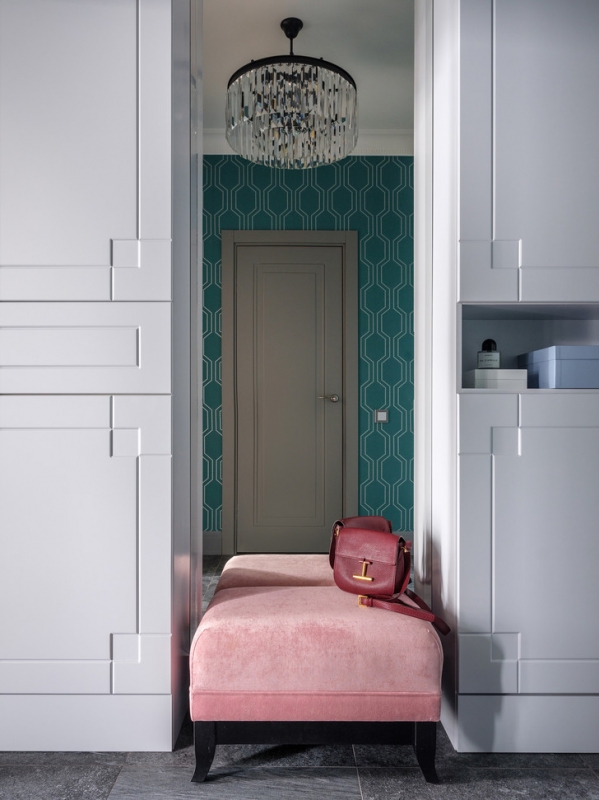 Hallway. Wallpaper, Studio 465, Zurich collection. Chandelier, MH Living. Poof, Dantone Home. The cabinet is made according to the designer’s sketches.

“The layout of the apartment was free, which opened up space for imagination,” says Claudia. — From the very beginning, we decided not to divide the kitchen and living room into two rooms, but to make a large combined space where it will be comfortable to cook, watch TV and receive guests. Abandoning the long corridor, we managed to make a spacious dressing room-laundry room at the entrance and add a few square meters of living room. The loggia was attached to the total area of the apartment, and the room became more spacious and bright thanks to the panoramic window.” 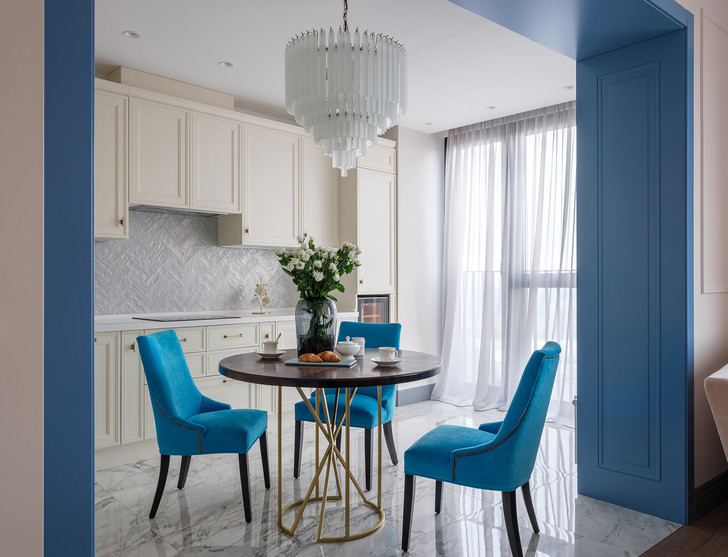 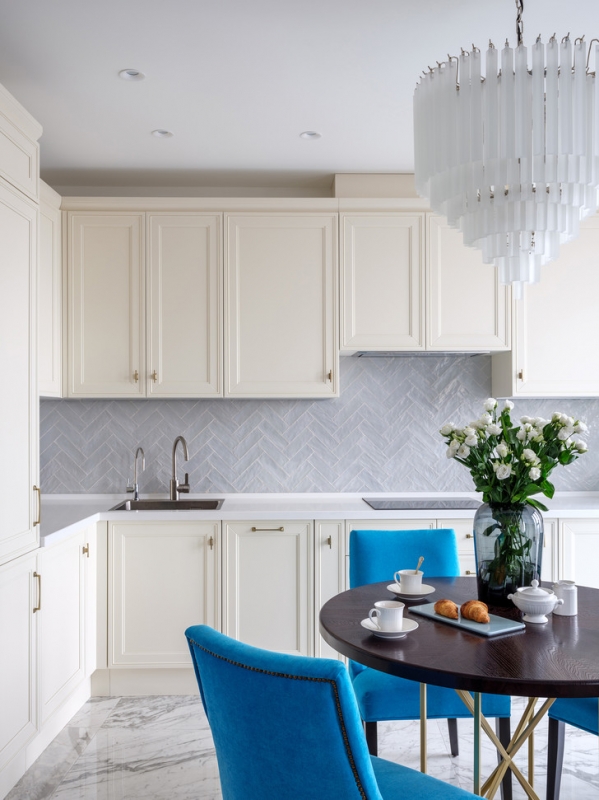 “It’s always a huge gift for a designer when a customer is open to experimenting with color. Inwe chose calm beige, light pink and gray shades as the background and added bright accents: emerald wallpaper in the hallway, turquoise chairs in the kitchen-dining room, light blue portal in the kitchen and many others,” the designer explains. 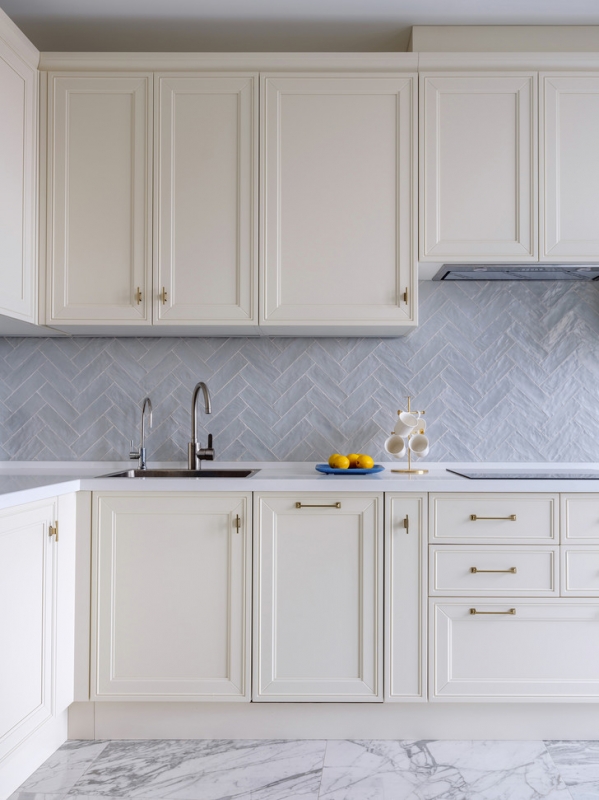 “The tile on the kitchen apron looked dirty gray during construction, which scared the customer a little, but when the furniture and the blue portal were installed, it began to play in a new way. By the way, it even has the name — Equipe Mallorca — reminds of the sea and warm shores.”

The design of the kitchen began with a wine cabinet, a gift from friends, which was sure to take its place. As a result, it is located in a column, closer to the area of the former loggia. The chandelier above the dining table has become the main decoration of the kitchen. It can be seen from the living room, so in the common room it was decided to do only with built-in ceiling lights to preserve the accent. 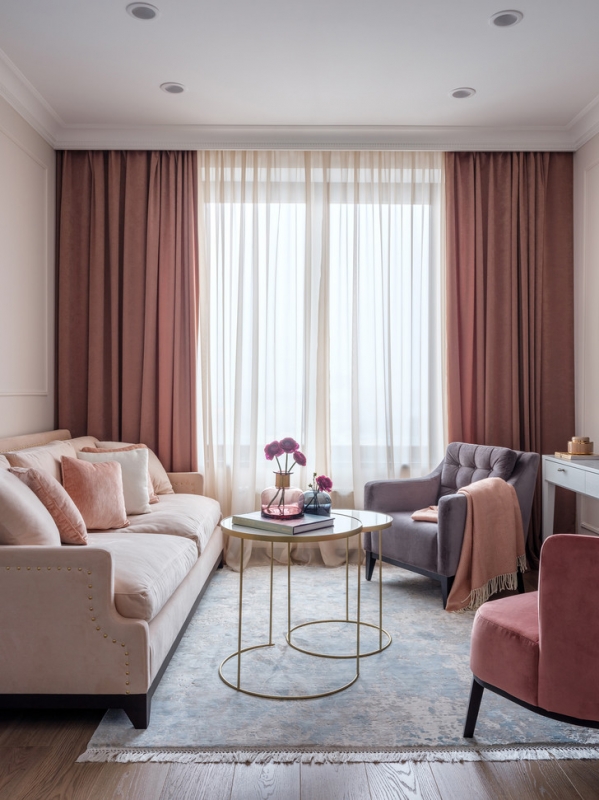 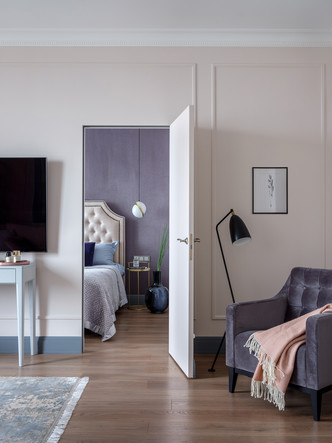 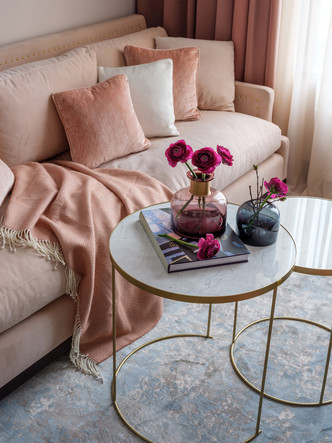 A fragment of the living room. Plaid H&M Home. Vases, L’appartement and BoDeCo.

The bedroom in the project turned out to be quite small, but instead of a traditional wardrobe, all the things of the hostess of the apartment are stored in a separate dressing room. “We decided to make the wall behind the bed saturated with gray: a beige matting bed looks advantageous against this background, and the geometric pattern echoes with the lamps,” adds Claudia. 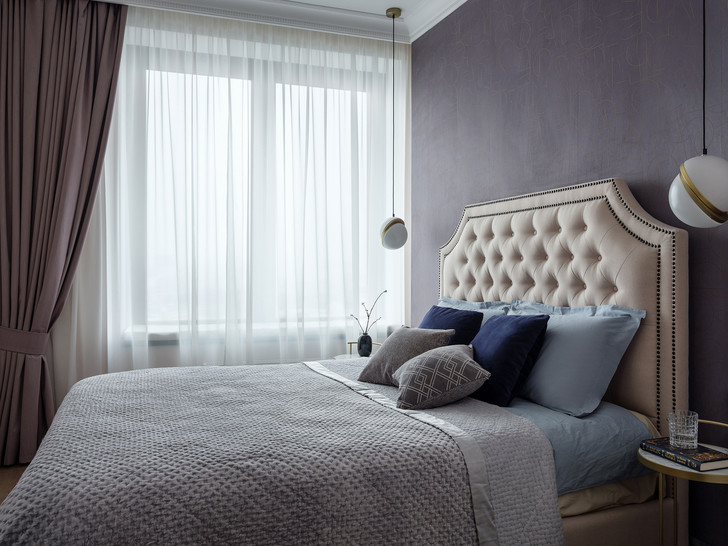 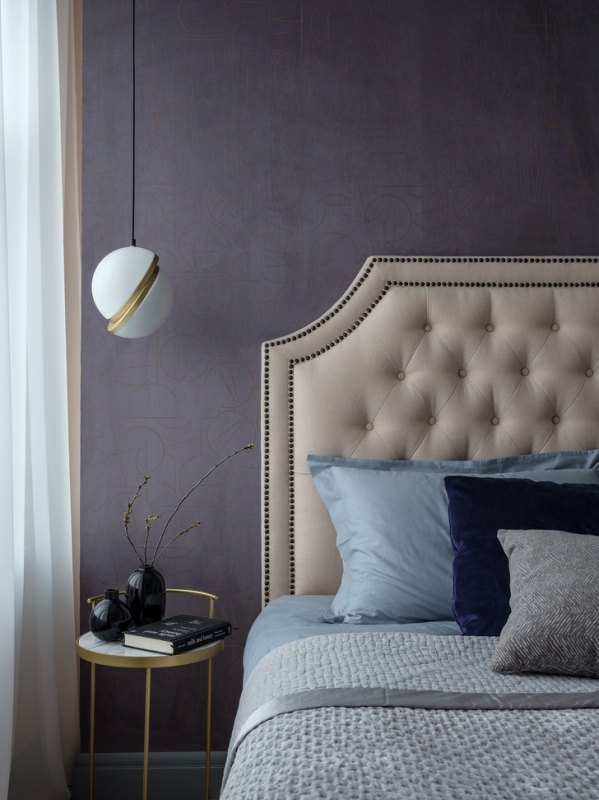 “In the bathroom we wanted to create a purely girly space where you can bring beauty. The main colors in the bathroom are gray and turquoise. I want to touch the tile with the effect of craquelure and take a closer look. Her layout behind the mirror and in the shower repeats the layout on the kitchen apron,” says the designer. 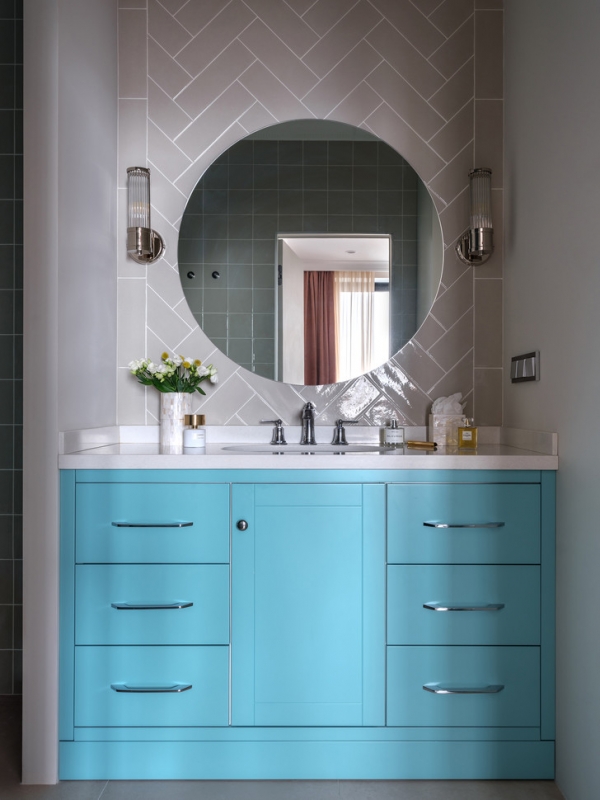 Bathroom. Tile, Tonalite. Bra, Eichholtz. Plumbing, Villeroy&Boch. The cabinet is made according to the sketches of the designer. Decor, Zara Home. 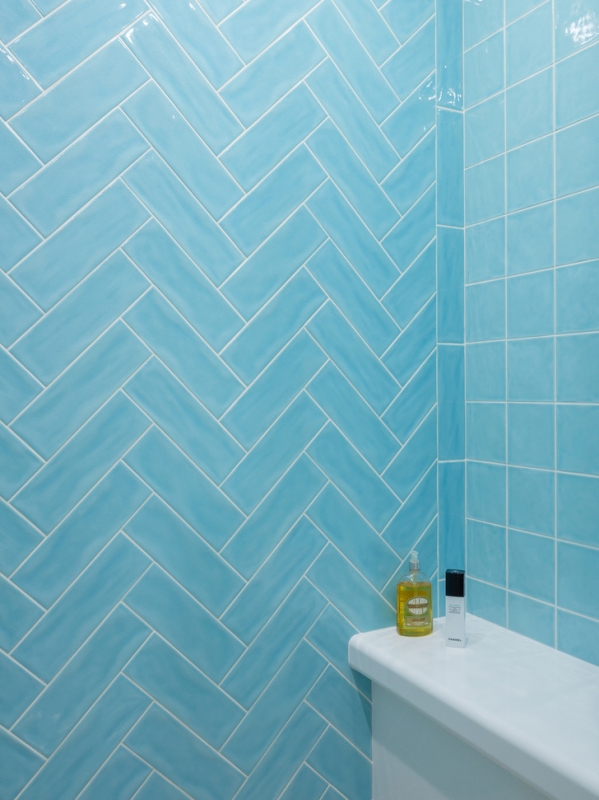 A fragment of the shower. Tile, Tonalite.