Designer Ekaterina Proskurina updated the standard interior to meet the needs of the customer and slightly changed the layout to make the space more functional. 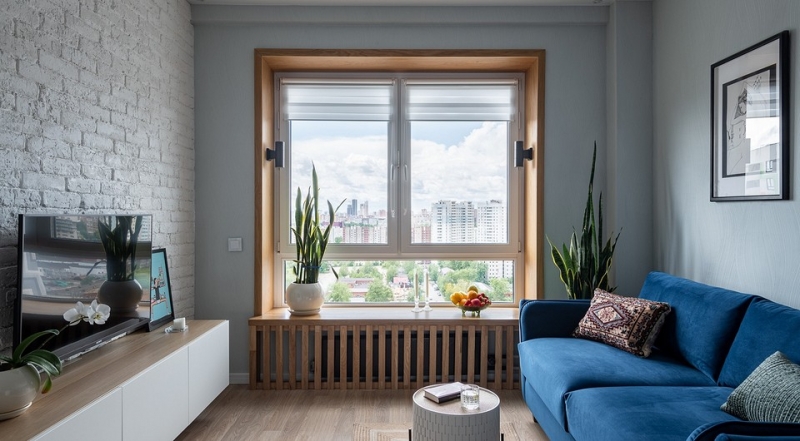 This apartment belongs to a young active girl. She often works from home, loves traveling, both for long distances and short “outings” on weekends, is fond of fashion, style and etiquette.

Designer Ekaterina Proskurina had one task, and the author of the project describes it this way: “To make it convenient and modern.” The owner had a wish to arrange a separate dressing room. 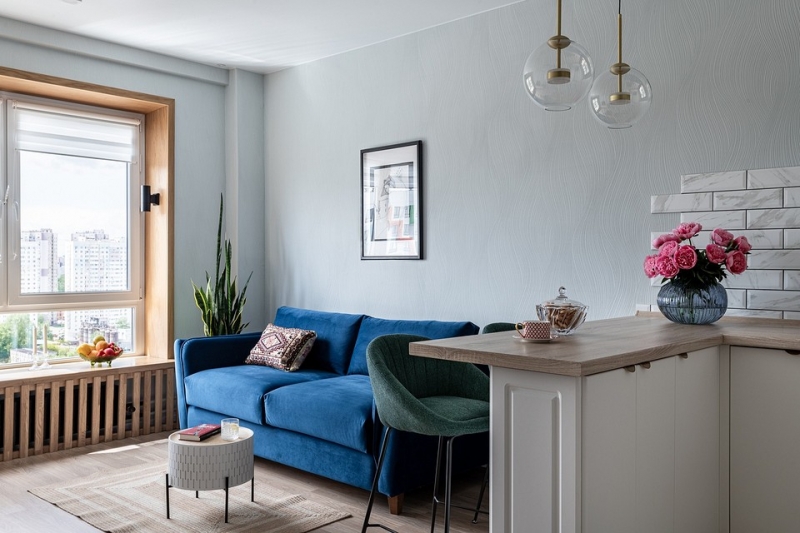 The apartment was rented with finishing from the developer. Therefore, I did not want to carry out global repair work, which includes redevelopment. The walls were not demolished, only new partitions were built for the dressing room at the bedroom.

The developer pasted the walls with white wallpaper for painting, laid laminate on the floor in residential areas, and in wet tiles. The ceilings were stretched. 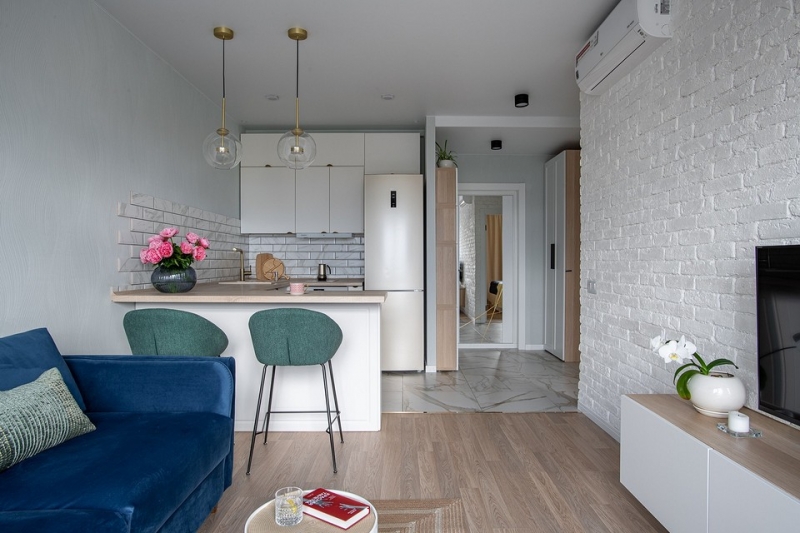 “Of all the finishing materials of the developer, we left only laminate. The walls were not leveled, so they pasted new wallpaper with a nice wavy pattern. We needed an accent in the decoration of the walls. So there was a plaster brick wall. The brick is laid L-shaped on the wall enclosing the bedroom, giving the impression that it is entirely made of brick. This is my favorite technique when the decor is emphasized planning. The bedroom has the same wallpaper with a wavy pattern as in the kitchen-living room, only a pleasant sandy color,” says the author of the project. 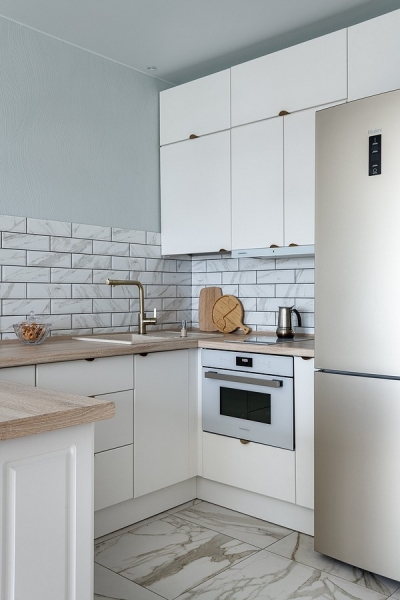 Another emphasis was placed on the windows in the kitchen-living room and bedroom. The openings were decorated with wooden panels, expanding the low window sill and decorating the radiators with slats. Window sills have become recreation areas, and windows are an excellent “frame” for the view that opens from the 20th floor. 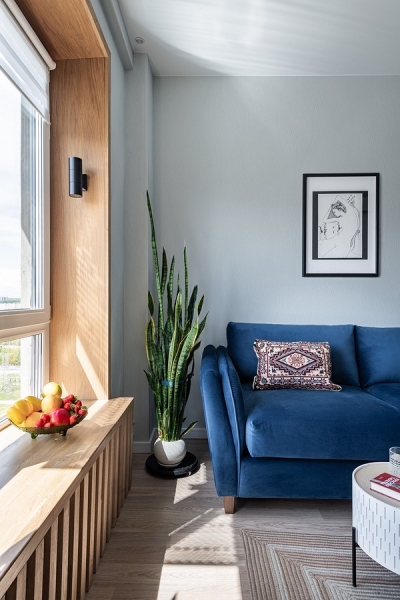 The bathroom has been radically transformed. We chose a new beige tile for a stone, large-format, and combined it with a tile for a tree of different sizes. “Thus, a more similar imitation of natural wood turned out,” the designer comments.

The plumbing was replaced with modern: an ordinary toilet with a suspended one, a bathtub with a shower with a pallet and a fence, a sink on a pedestal with a stylish overhead mounted on a countertop with a pedestal. There’s also a washing machine under the countertop. 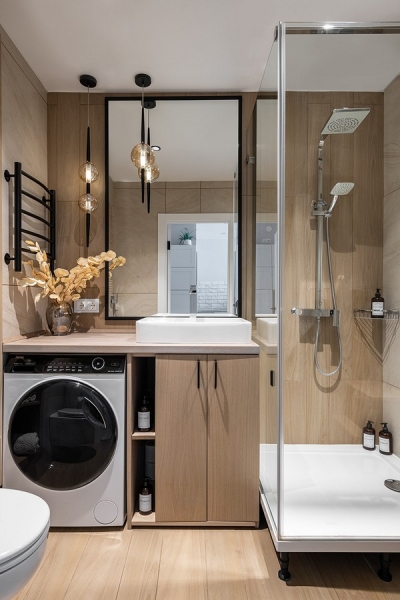 The fact that a dressing room was organized in the apartment made it possible to abandon the overall cabinets. However, it required a compromise in the arrangement of the bedroom: they chose a smaller bed, 1.6 meters wide. But it’s convenient for the hostess. The bed has a lifting mechanism, so it is also a storage place. 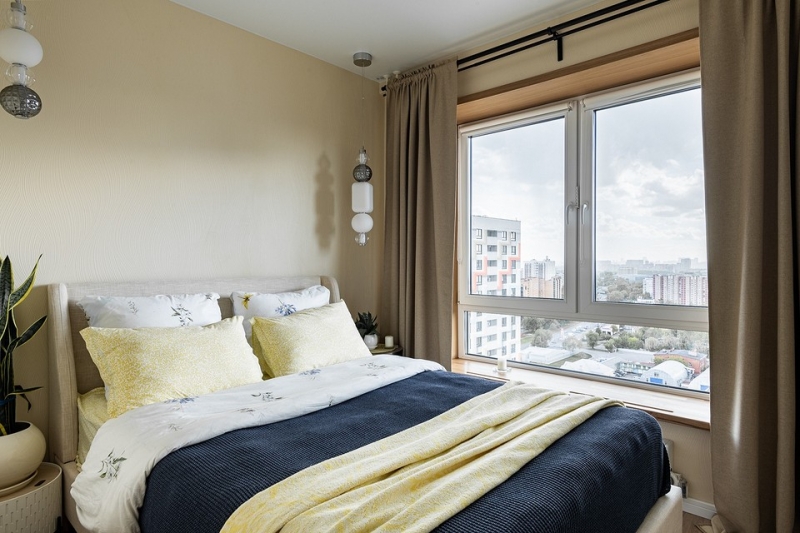 In the hallway there is a wardrobe for outerwear and a second one opposite it, for household purposes, with an open niche for various small things. 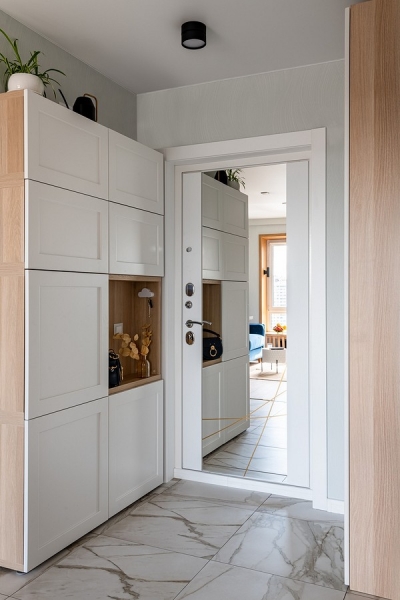 The U-shaped kitchen set was made to order. One of the modules also plays the role of a bar counter. To save space, we chose a two-burner stove, as well as an oven with a microwave function. The hostess rarely cooks at home, so this set is enough for her.

New cables for lamps were hidden in baseboards and under a stretch ceiling so as not to shatter the walls. We have thought through several scenarios of light. These are spotlights on the ceiling, suspensions above the bar and on the sides of the bed, at the bathroom mirror, as well as sconces at the window.

The interior in the style of eco-minimalism is based on the principles of home comfort with a slight touch of travel memories. It was created for a girl who is passionate about her work (who has been transported home during the years of the pandemic). The idea of the interior comes from two windows lined with oak slopes around the perimeter. The emphasis on windows is not accidental. The apartment is located on the 20th floor, and the windows offer a beautiful view of the city, which is one of the main decorations. 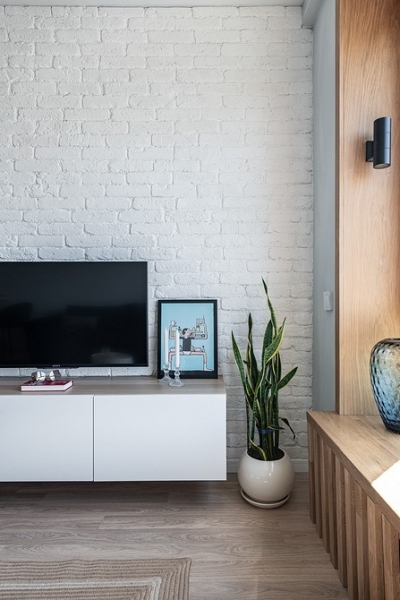 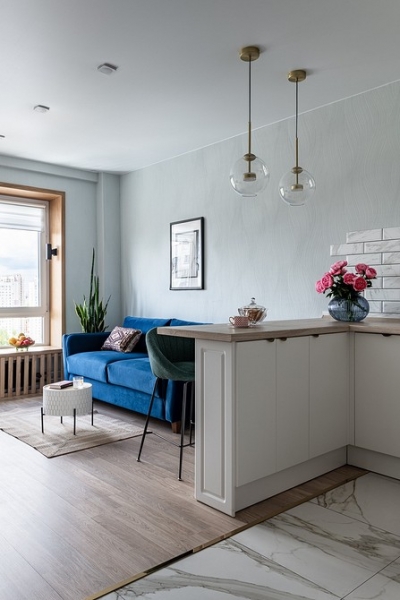 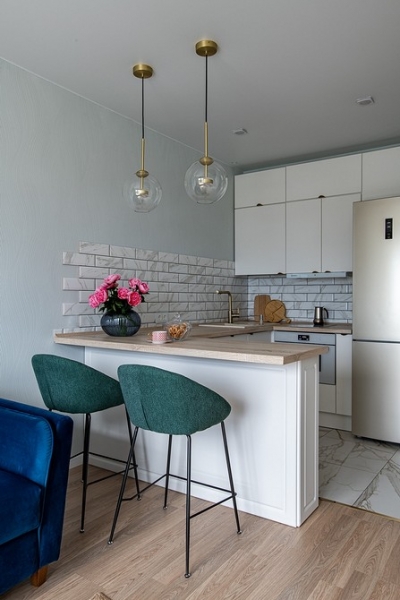 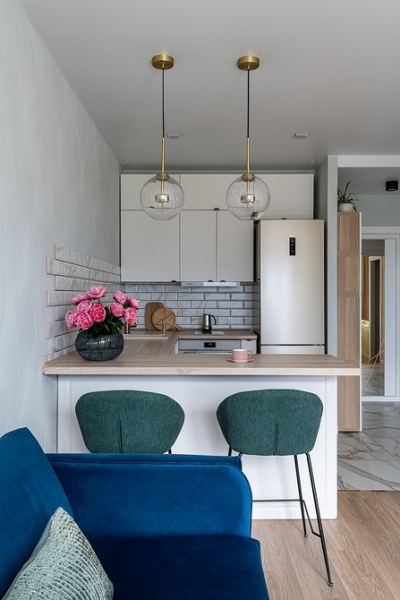 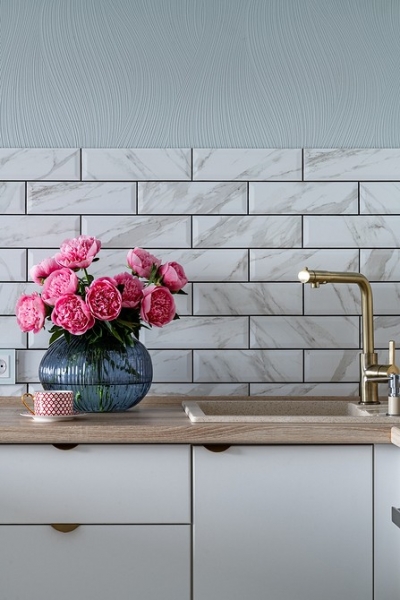 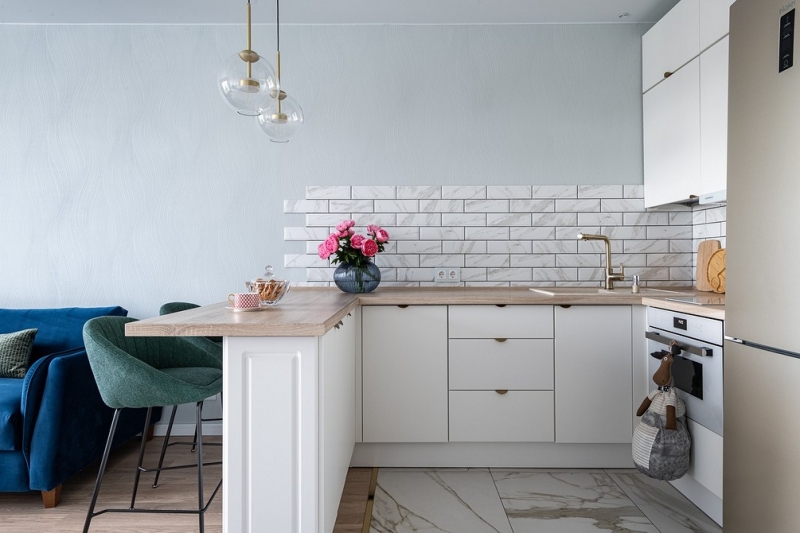 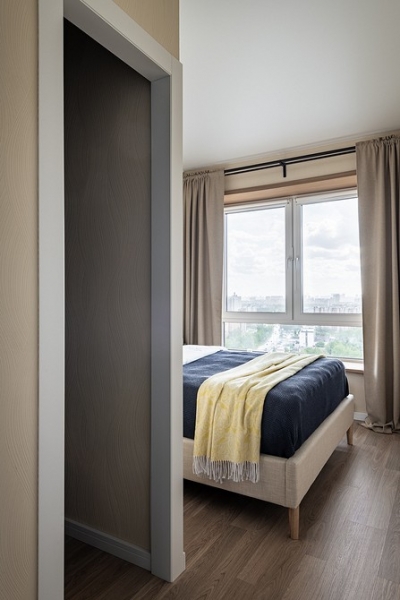 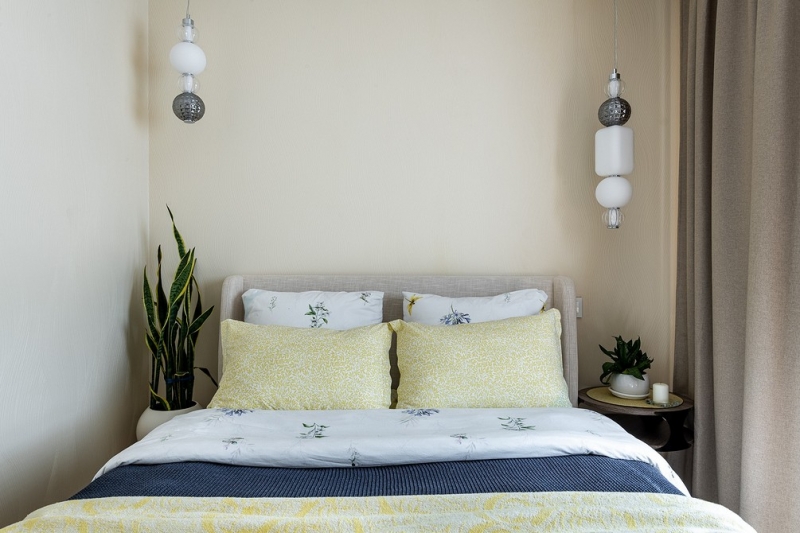 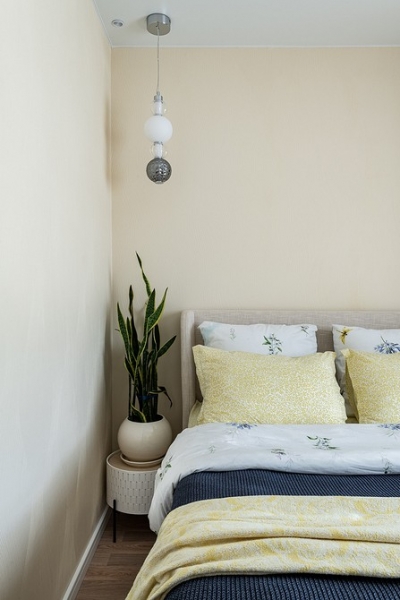 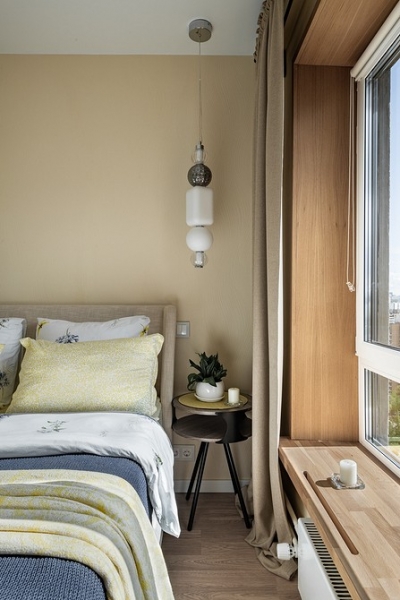 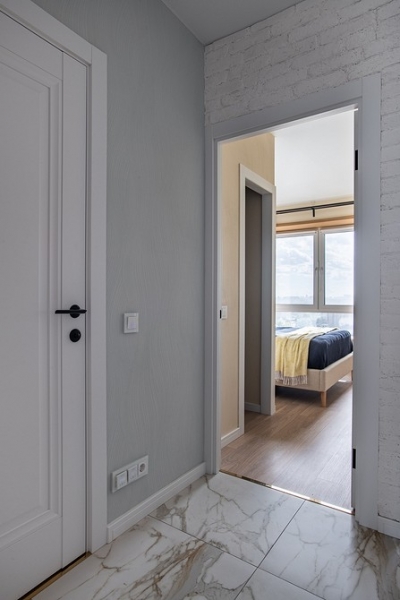 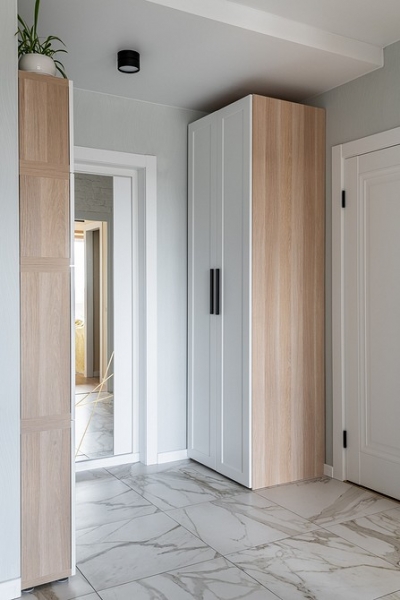 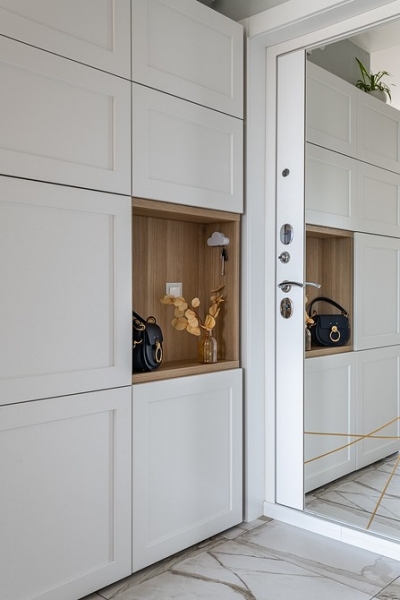 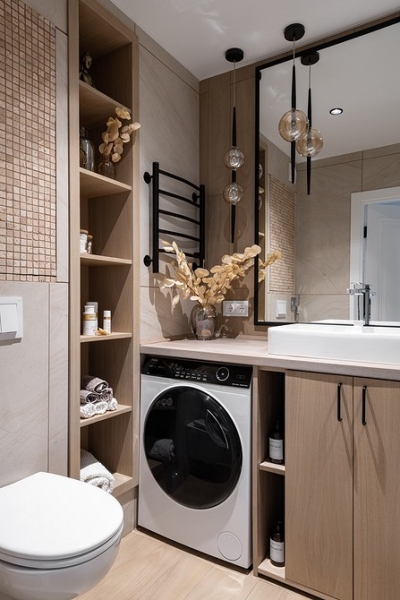 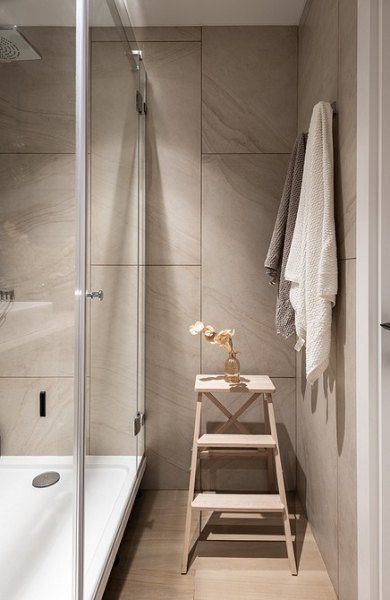 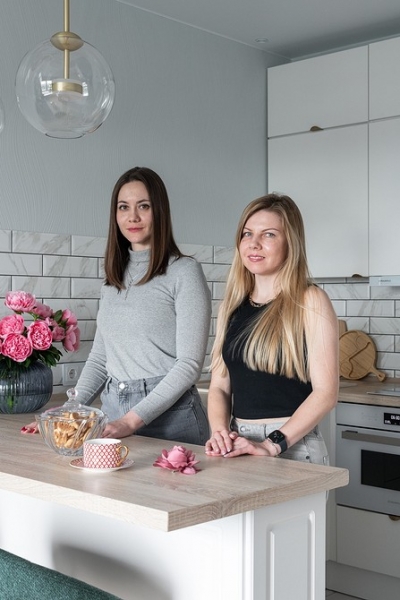 Designer Ekaterina Proskurina with the owner of the apartment

How the apartment looked before the renovation 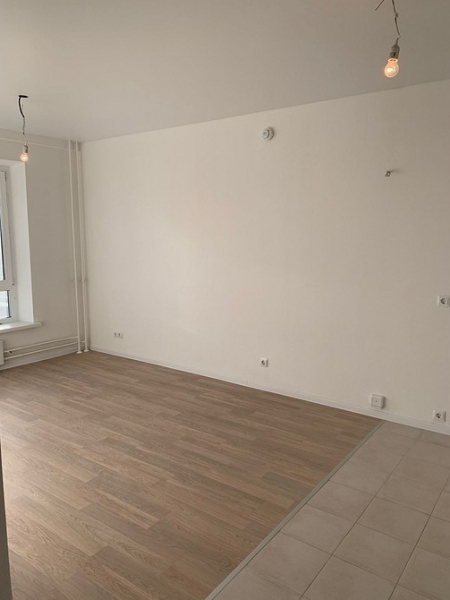 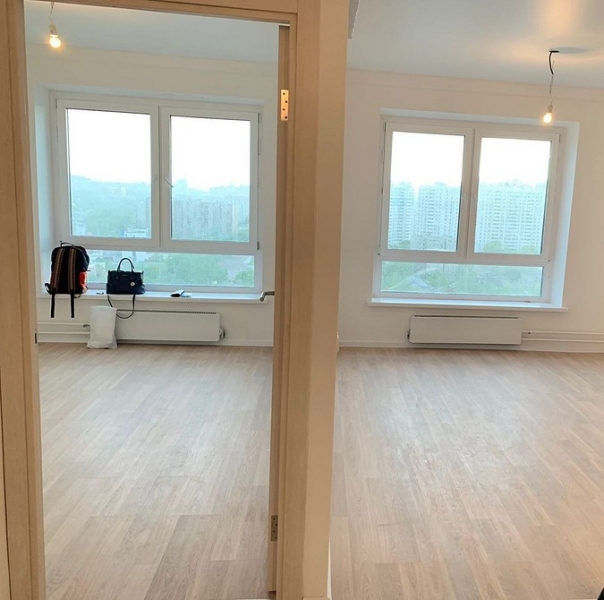 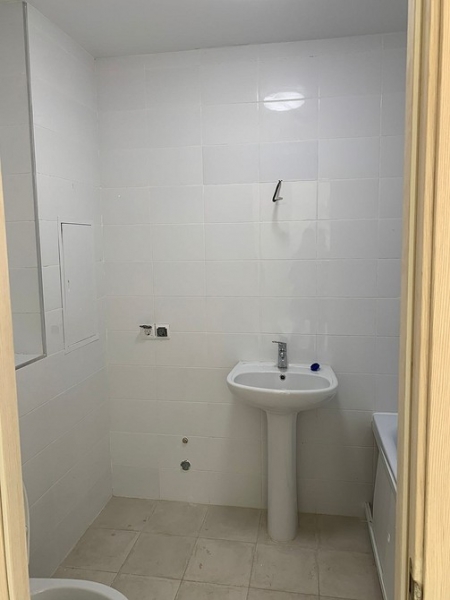 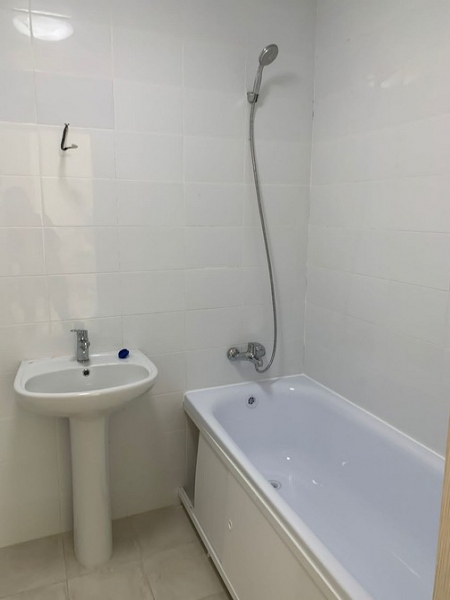 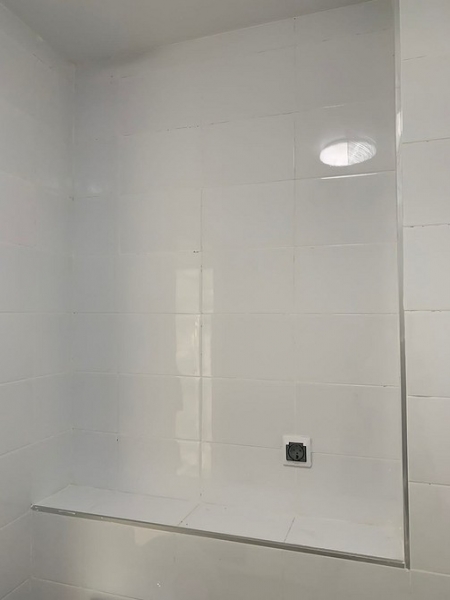 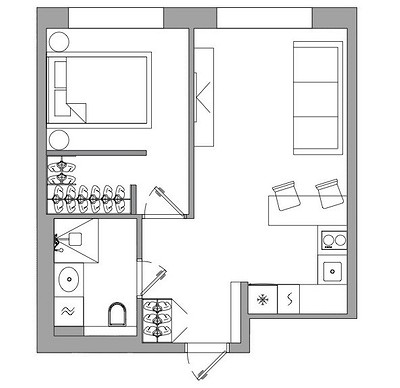