Architect Elena Lokastova designed an avant-garde loft in a Moscow new building, using gray concrete, menthol MDF panels and red veneer as a basis. The last one is just fire! 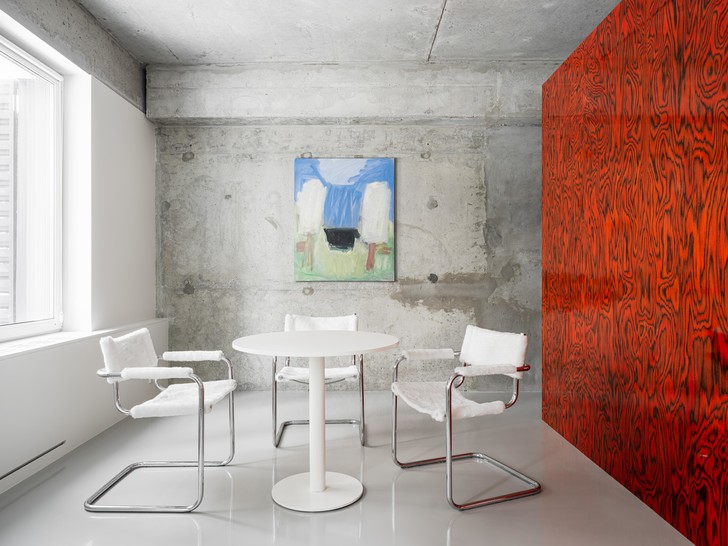 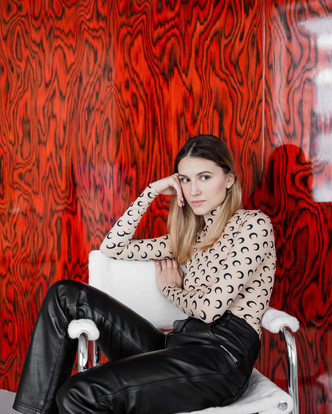 Where is it: Moskova, Amurskaya street

The main idea of the project:  “texture contrasts” 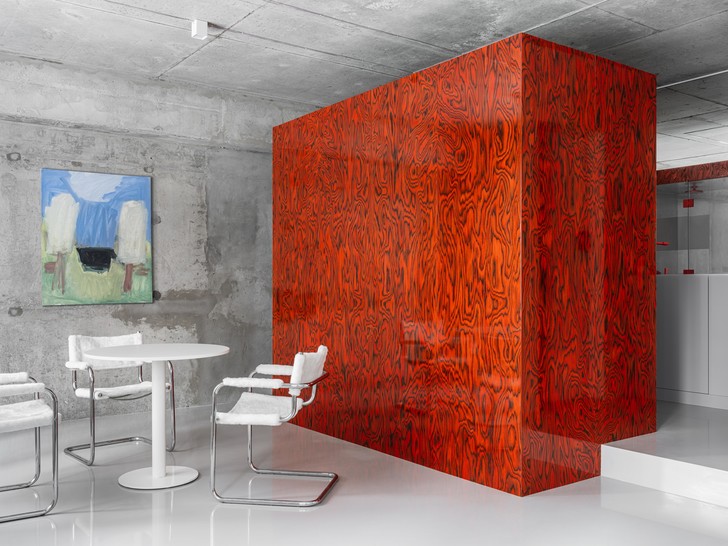 In the residential part of the apartment there is a self—leveling epoxy floor. Red veneer, Alpi. The table and chairs were bought at Avito, after which the upholstery was updated.

“In fact, this is not one apartment, but two at once,” says architect Elena Lokastova. – On 63 square meters it was required to place two full-fledged apartments with full equipment and storage. Small apartments were planned for rental, the customer made the second ones for himself.” 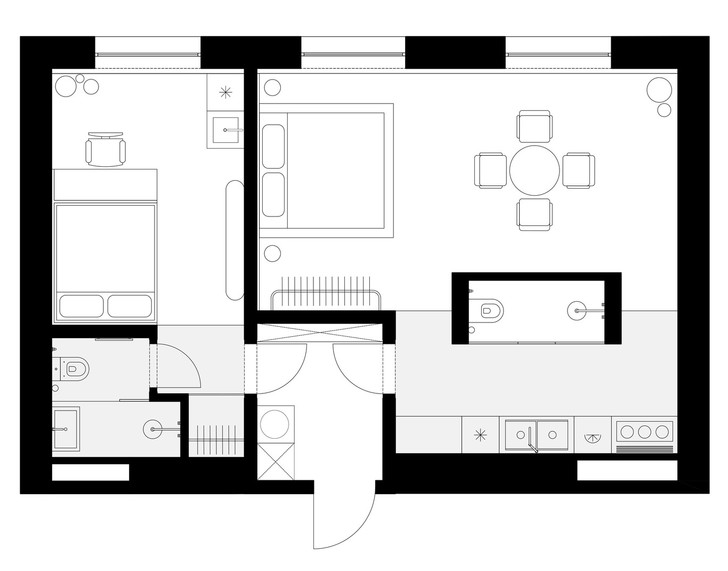 The layout of the apartment is 63 m2, designed by architect Elena Lokastova. Apartments for rent are located to the left of the entrance. On the right is the owner’s housing. 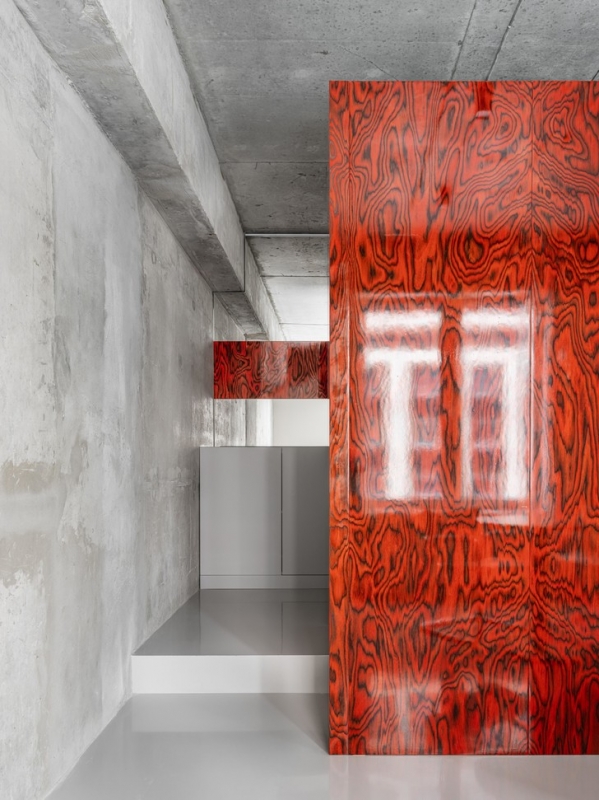 The bathroom unit does not reach the ceiling, which creates perspective and lets natural light into the kitchen.

“The bathroom in the main apartment is placed in a separate block that does not reach the ceiling. With its location, it separates the living room from the kitchen, and due to the decoration of bright glossy material, it serves as the main accent of the space.” 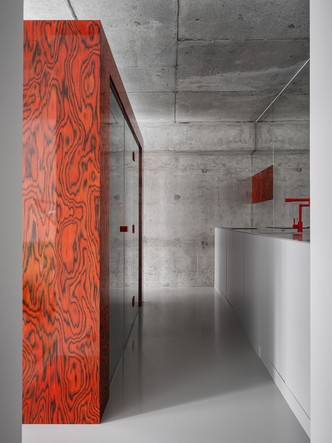 On the left is a bathroom and a shower cabin with a transparent wall. On the right is the kitchen and washbasin. 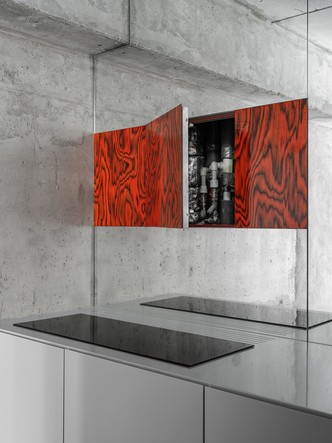 “To separate the stove from the mirror, we chose a three-burner panel. This made it possible to fit the hood in the countertop so as not to obscure the mirror and not to obstruct access to communications.”

“The customer had a great desire to have an open bathroom, so we turned it away from the windows towards the mirrored wall. Thus, the space of the shower room remains united with the living area, but the owner will not have to worry about his privacy.” 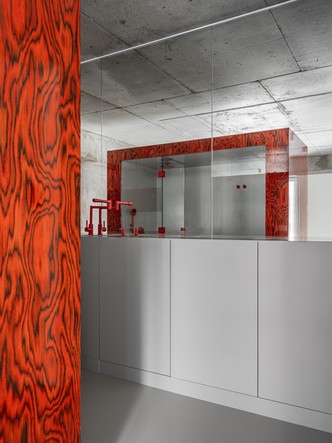 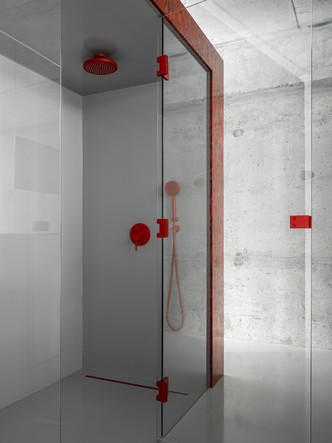 “In order to save the budget, we decided to do without a washbasin in the shower room. He moved into a single structure with a kitchen and a closet. Two sinks are combined into one and can overlap with a part of the countertop: if there are guests in the house, then the washbasin closes and the kitchen sink remains.” 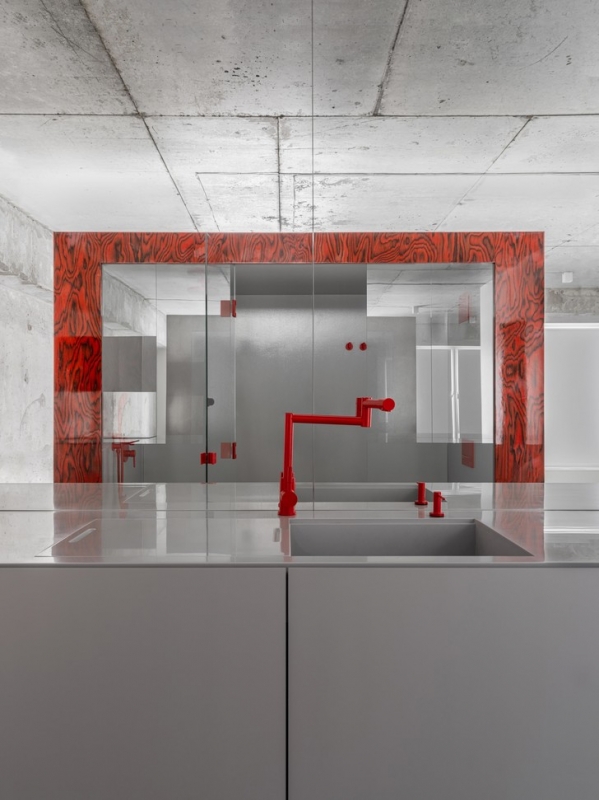 Putty and two-component painting are used in the decoration of bathrooms.

“I wanted to leave all rough concrete surfaces in their original form: this is an overlap and a load-bearing concrete wall, from which we have not even removed the builders’ notes. With the advent of the mirrored wall, the amount of concrete doubled, and an interesting contrast of lightness and brutality, gloss and roughness appeared in the interior. The rest of the surfaces were covered with gray epoxy, and the furniture was covered with gray enamel.” 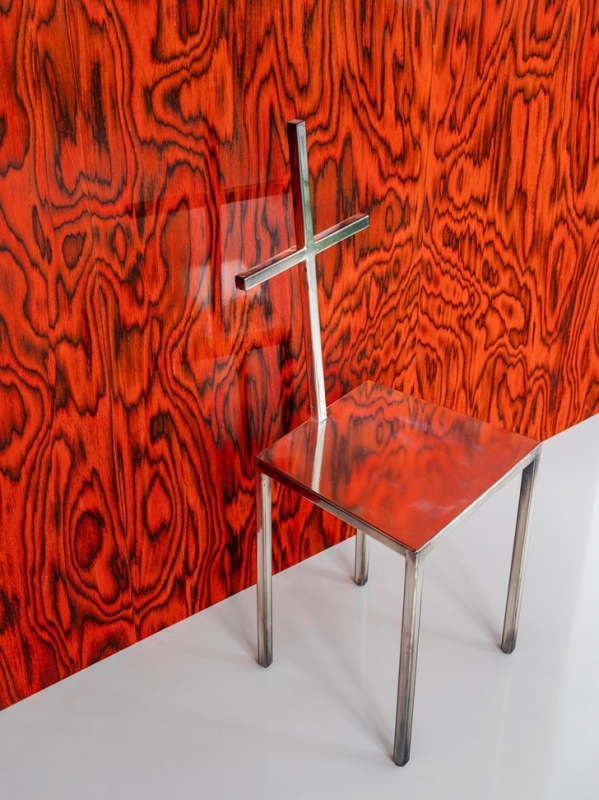 “The veneer of the red cube is covered with a glossy varnish. In combination with the menthol bed, there is another, this time a color contrast” 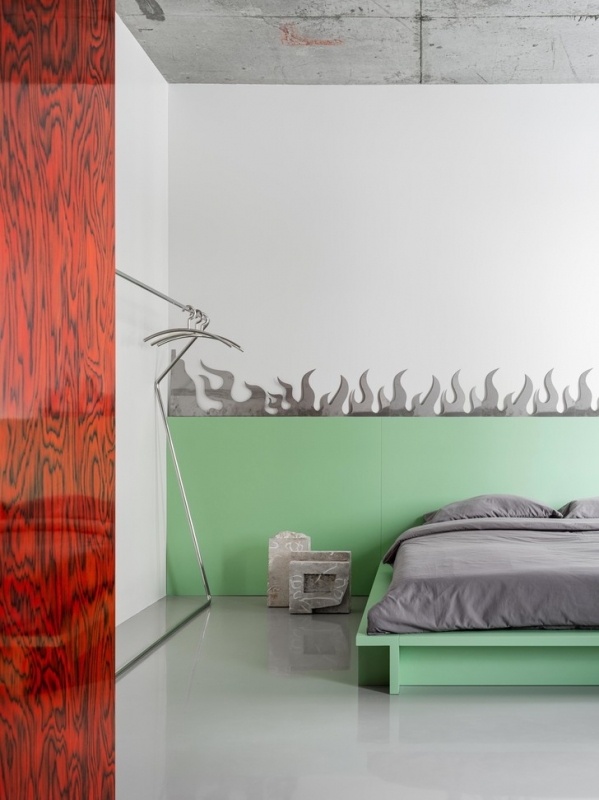 The metal flame at the head of the bed is the work of architect Elena Lokastova. Stone sculptures, Anna Tagantseva-Kobzeva, Fābula Gallery.

The interior is built on the contrast of textures and colors, lightness and brutality, gloss and roughness 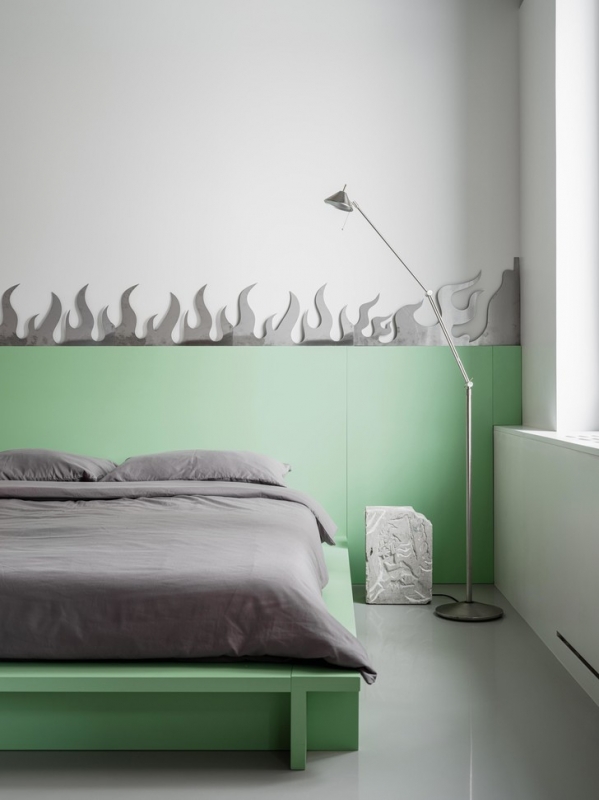 “In small apartments, in conditions of extreme space savings, we have developed a single design of a bed and a workplace, and placed the shower opposite the washbasin. The room has a small kitchen with a removable hob and refrigerator, as well as a spacious wardrobe.” 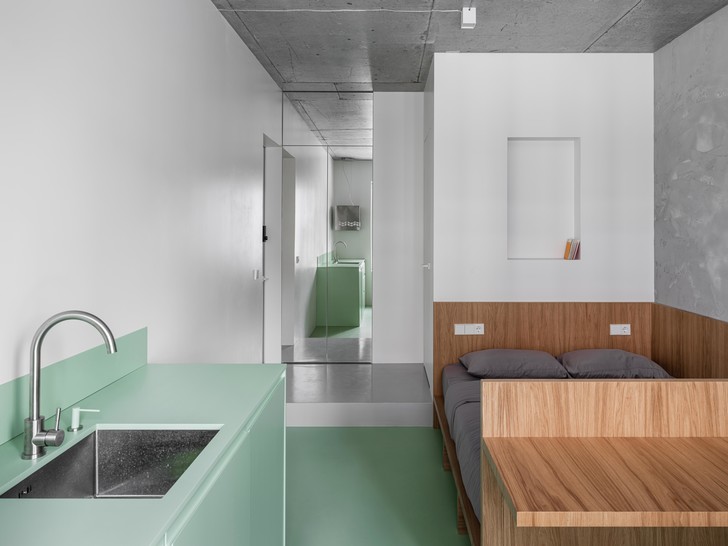 “The need to save the budget has led to non-standard solutions, many of which have turned out to be so interesting and ergonomic that now they want to be used in other, larger-scale projects.” 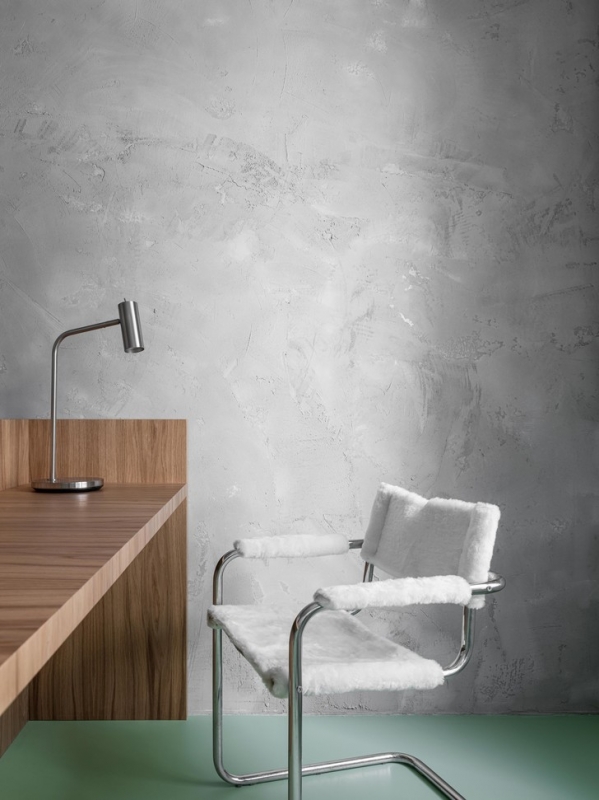 Working area in a small apartment. The table is an extension of the headboard.