The collapsed ceiling in the apartment, on which architect Boris Denisyuk worked, opened up new prospects on an area of 65 m2 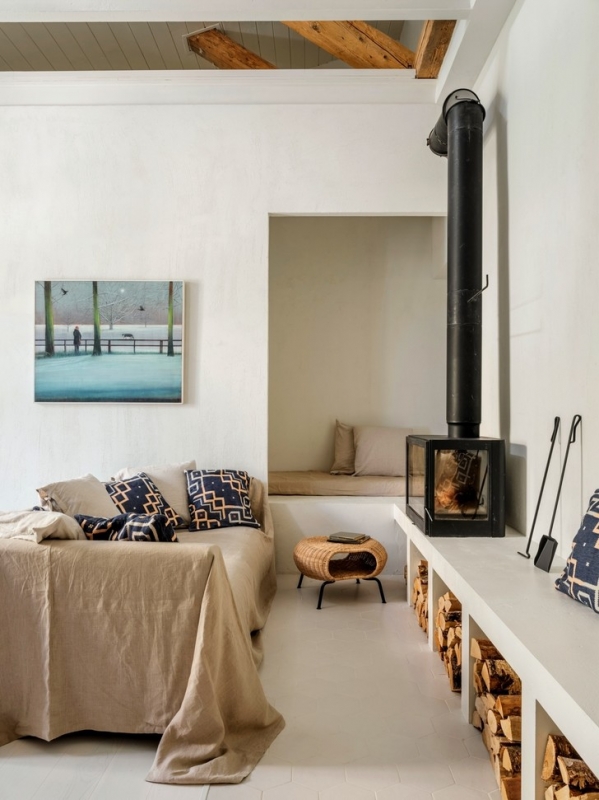 The century-old wooden rafters were restored and rebuilt. 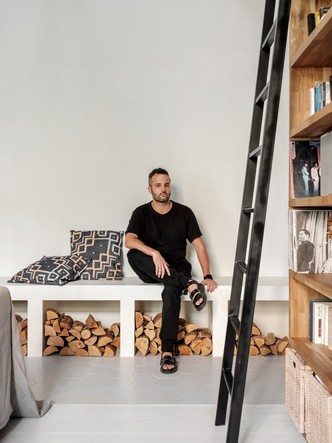 The author of the project is architect Boris Denisyuk.

Architect Boris Denisyuk does not adhere to the framework of a certain style. “It all depends on the context,” he is sure. “What is good in one place will be completely inappropriate in another. Last time I did a loft in Moscow City for the same customer, but now it’s a completely different story.

The apartment is located in a house built in 1914 on Kalanchevskaya Street. An unusual space with high ceilings — 4.2 meters, which were raised even higher during the renovation, and the fireplace laid down in the BTI plan required a special approach and dictated its own rules.” 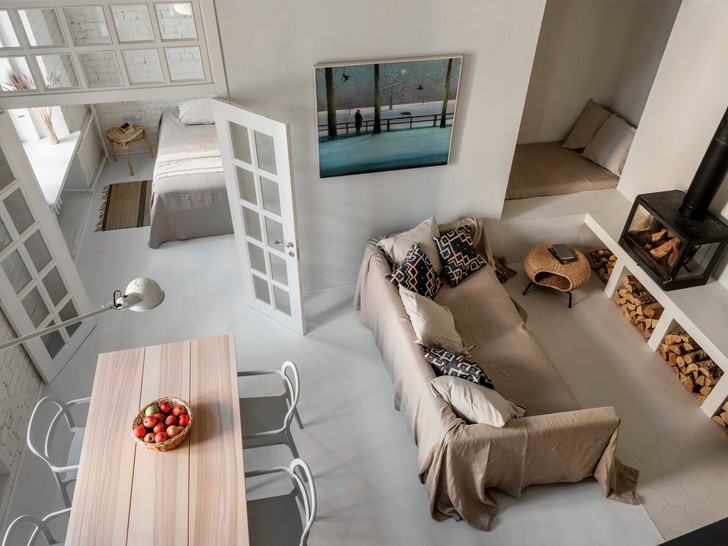 General view from the attic. In the center of the space there is a fireplace with a long shelf—woodpile, which also serves as a bench at the entrance and a pedestal for multimedia equipment. A meter from the fireplace there is a cable channel leading the HDMI up to the beam where the projector is located. The walls are finished with white cement plaster. The sofa “Stockholm”, IKEA, is covered with a linen blanket.

Although the original layout can be said to have been preserved — a spacious living room with a fireplace, a bedroom, a kitchen, a corridor and a bathroom in a separate block at the entrance remained in their places, in general, the space has changed beyond recognition.

“The customer wanted to increase the original area of the apartment, 65 square meters, by building a mezzanine over the bedroom,” Boris continues, “but that was before the ceiling collapsed on us, attached to rotten boards. And the century—old wooden rafters opened to the eye – a real luxury, metal I-beams and a dormer window built into the roof. 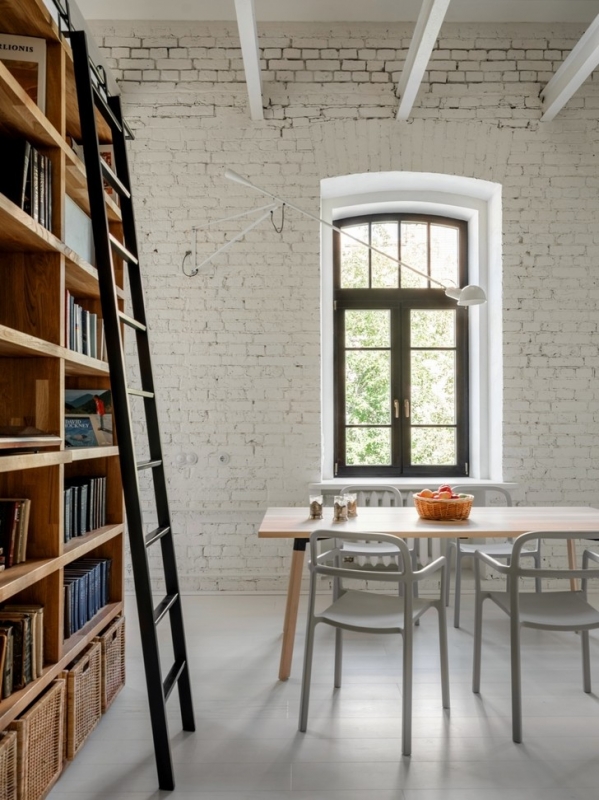 The library staircase leads to the mezzanine, equipped above the bathroom. The dining room is illuminated by a sconce 265, designed by Paolo Rizzatto, 1973, Flos, on a long metal bracket that turns in all directions. Hupperlig chairs, HAY design for IKEA.

These elements laid the stylistic foundation of the project and, of course, brought a lot of trouble — before all the work began, it was necessary to restore the roof and repair the beams. Fortunately, our repair coincided with the general overhaul of the house, so most of the worries about replacing communications, restoring the facade and roof were taken over by the city council. This made it possible to save significantly and fit into the budget, which in this project amounted to about 3.5 million rubles.” 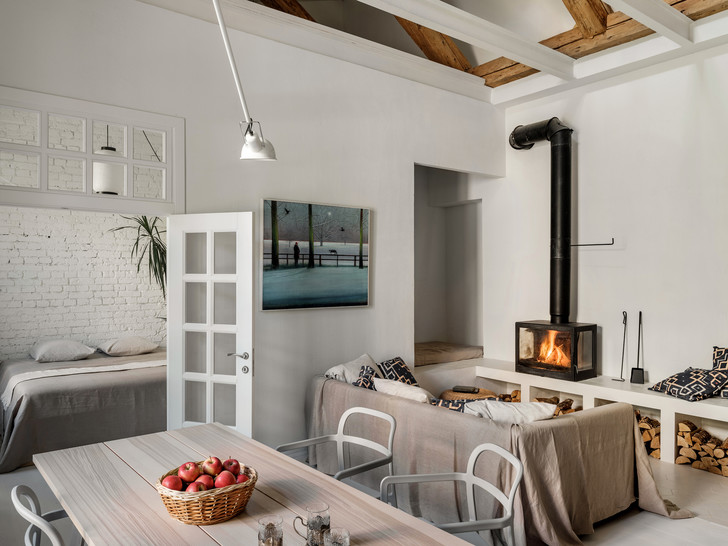 View of the living room.

After the repair of the roof and supporting structures, the mezzanine was still built. One, with an area of 10 m2, is used as an additional living room above the bathroom (now a library staircase leads there). And the second, higher, storage room of 20 m2 in the attic above the bedroom.

“From the library side, we managed to make a ceiling window to the bathroom, I think this is the most successful element in the project,” says the architect. — And in general, thanks to the slanting roof and the dormer window historically located in it, a space completely flooded with natural light turned out. And this is the main secret of the beauty of the residential interior!” 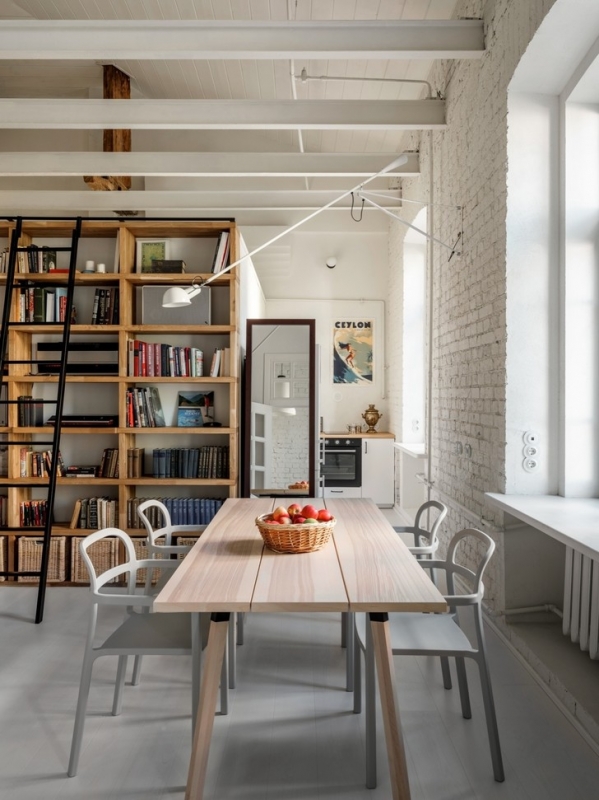 Canteen. Behind the metal ceiling beams there is an LED strip that illuminates the entire space. On the floor — parquet board, Barlinek. 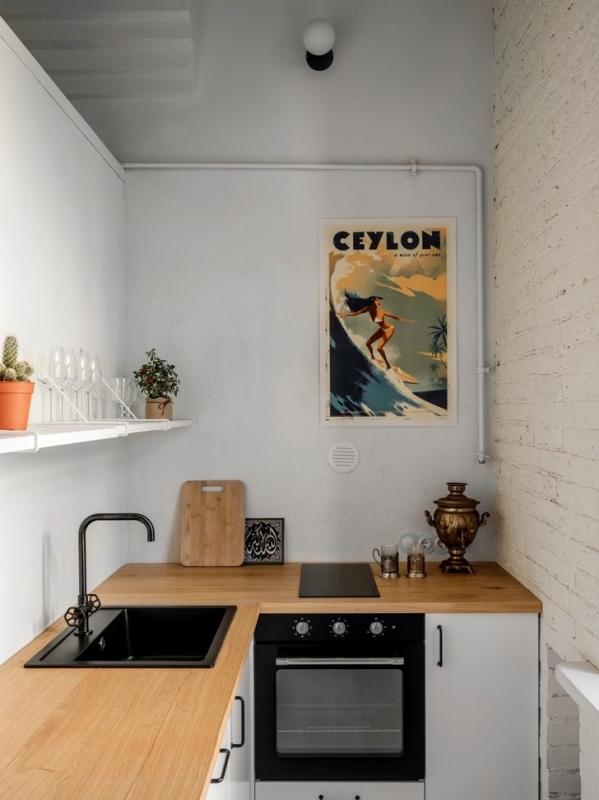 The compact IKEA kitchen is built into a niche near the dining room.

Open wooden beams, high ceilings and the un-Moscow generous presence of sunlight themselves inspired thoughts of the Mediterranean, so Boris Denisyuk decided to beat the style of the house on the coast in the interior design. This is how the walls were decorated with white cement plaster. The floors were also made white — tinted parquet in the living room area turns into tiles in the hallway. The central element of the living room is a glass fireplace with a long shelf-woodpile, which stretches all the way to the hallway, where it serves as a bench at the entrance. In the living room area, the same shelf is used as a chest of drawers for multimedia equipment.

The apartment is before and after renovation. 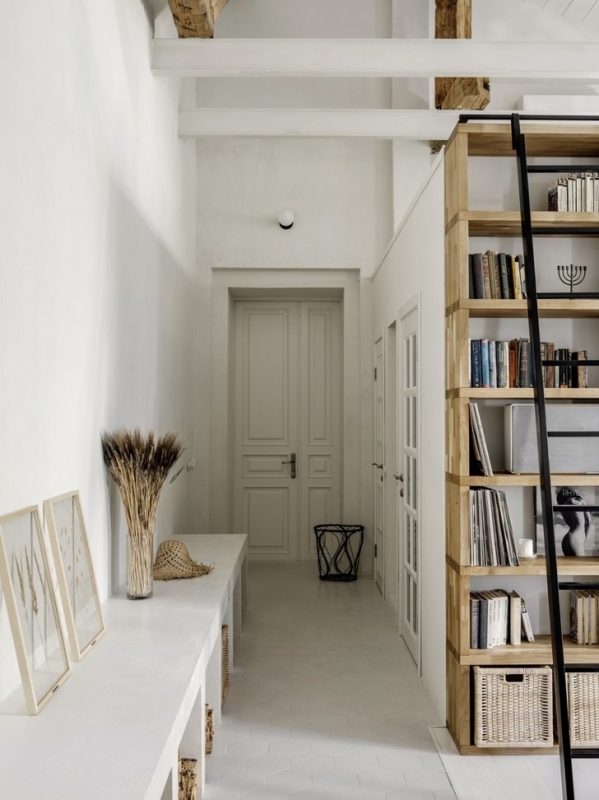 Entrance area. There is a mezzanine above the bathroom, which gave the apartment an additional 10 sq. m. On the floor there are tiles, Equipe. 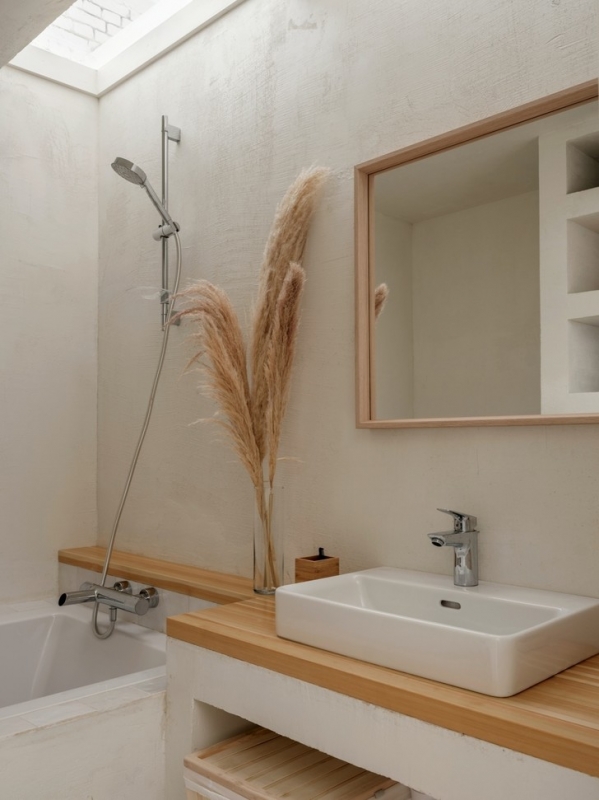 The light window, which was made over the bathroom, the architect considers one of the most successful elements of the interior.

“I didn’t want to overload the space with unnecessary things,” the architect notes. — Therefore, for example, instead of bulky lamps, I laid an LED strip behind the metal ceiling beams, which illuminates the entire room. This approach is very close to the customer. He is quite a progressive person, develops new projects in a large bank, is interested in art, posters, collects vinyl — all this, in turn, is reflected in the interior.

As for upholstered furniture, we cheated a little by hiding the Ikea sofa under a fashionable linen bedspread. But, by the way, the sofa turned out to be incredibly comfortable. And finally, as the final accents, iconic designer lamps like a hanging lantern in the bedroom by Jaime Hayon were hung. Thanks to the rice paper lampshade, it gives a surprisingly soft and warm diffused light.” 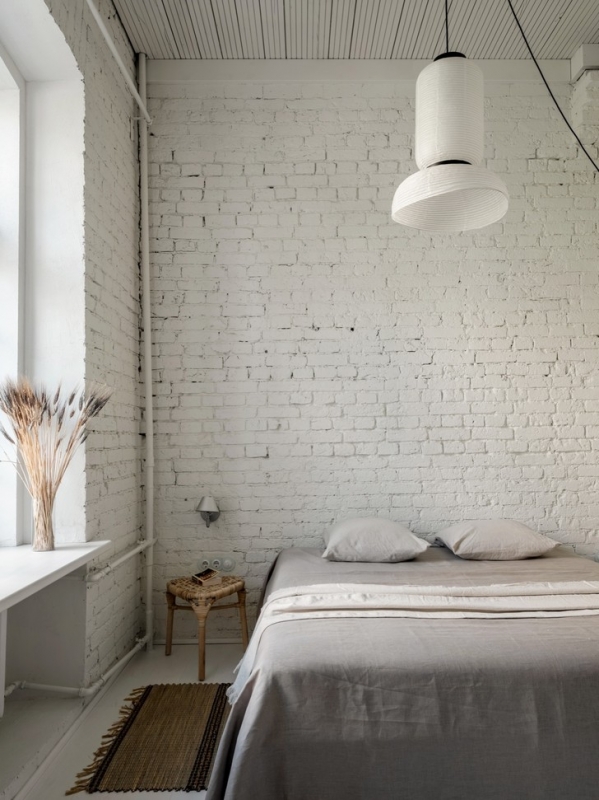 Bedroom. The Formakami pendant lamp, designed by Jaime Iona for &Tradition, gives a warm diffused light thanks to the rice paper lampshade. 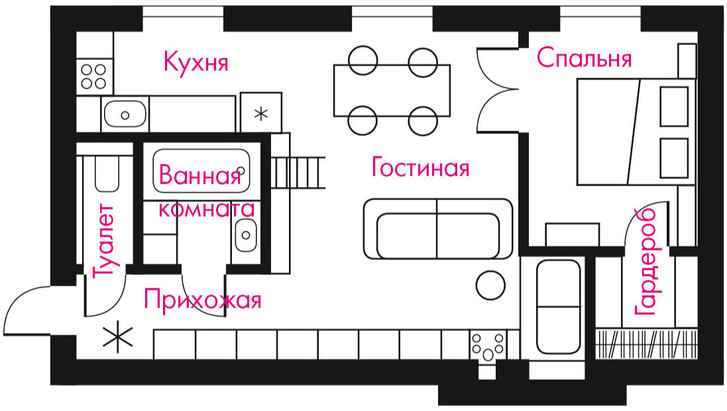 The project of Boris Denisyukachesov Polina