There are two celebrities behind this project at once. The mansion itself was built in 1939 by the famous American architect Paul R. Williams, and its interiors were re-decorated by the star decorator Jean-Louis Deneau 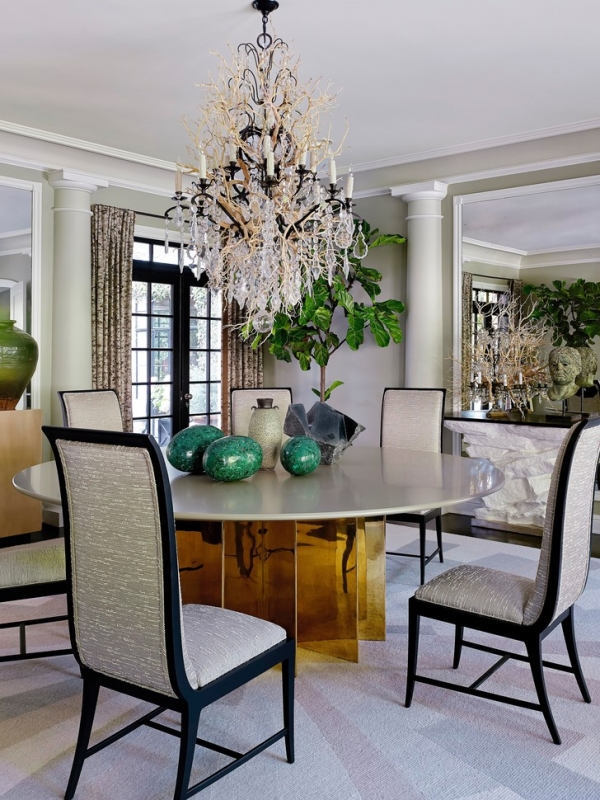 Canteen. The carpet is woven to order in Nepal. Above the table, designed by Jean-Louis Deneau, Jean de Merry, hangs a chandelier in the style of Louis XV. Chairs, 1950s, America, upholstered by Zinc Textile. Plaster console, designed by Emilio Terry.

When the Parisian designer Jean-Louis Deniot visited Los Angeles for the first time ten years ago, he did not like it very much. “I didn’t understand at all how this city was planned. There is no center as such. You can only move by car, and I don’t have a driver’s license!” However, after getting to know Los Angeles better, Day changed his attitude. “Now I can’t imagine life without this city. I love its lights, weather, eclectic architecture, people,” says the designer. 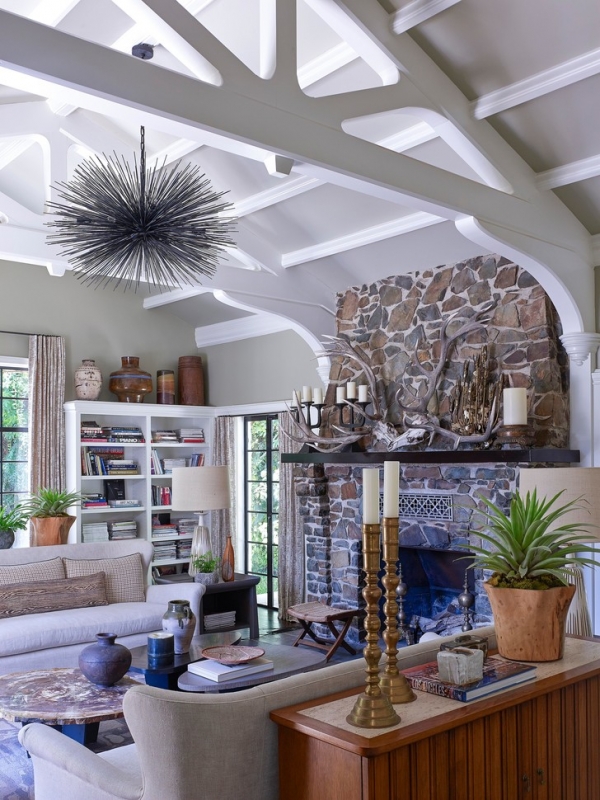 Jean-Louis has many friends here, including famous decorators, actors and TV stars. He designed this house in the north of Doheny Drive for a music producer. “The uniqueness of the object lies in the building itself — a real historical monument, built in 1939 by the famous architect Paul R. Williams,” says Jean-Louis. — In addition, it is located not far from my favorite Chateau Marmont hotel, so I could walk to work.” 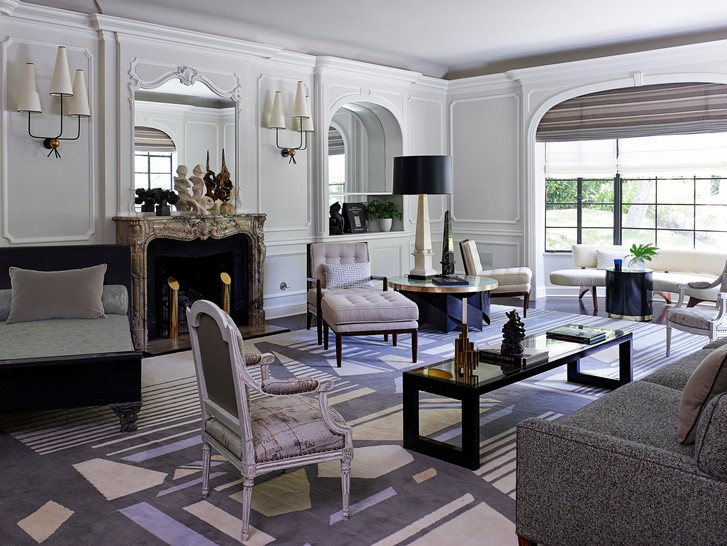 Living room. The couch and round table are designed by Jean-Louis Deneau at the Jean de Merry factory. Velvet pillow, Créations Métaphores. To the right of the fireplace is a chair and an ottoman, T. H. Robsjohn—Gibbings, upholstered by Mood Fabrics. There is a sofa by the window, designed by Vladimir Kagan. Two Louis XVI style armchairs are covered with fabric, Beacon Hill. Lacquered wood table with mirror top, 1930s, bought in Los Angeles. The sofa, designed by Edward Wormley, is upholstered in alpaca by Loro Piana. The carpet is woven to order. Sconce, designed by Jean Royer. 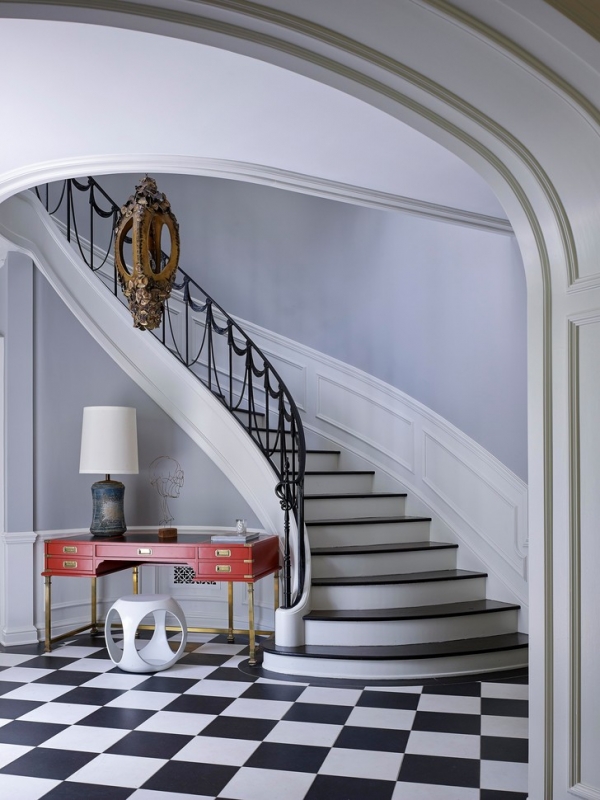 Paul R. Williams became the first African-American admitted to the American Institute of Architecture. During his career, he designed more than 2,000 private homes, and his client lists included such names as Frank Sinatra, Lucille Ball and Tyrone Power. “People in Los Angeles like to tell that they once lived in the houses of Paul Williams,” notes Deno, “this is as part of their biography.” 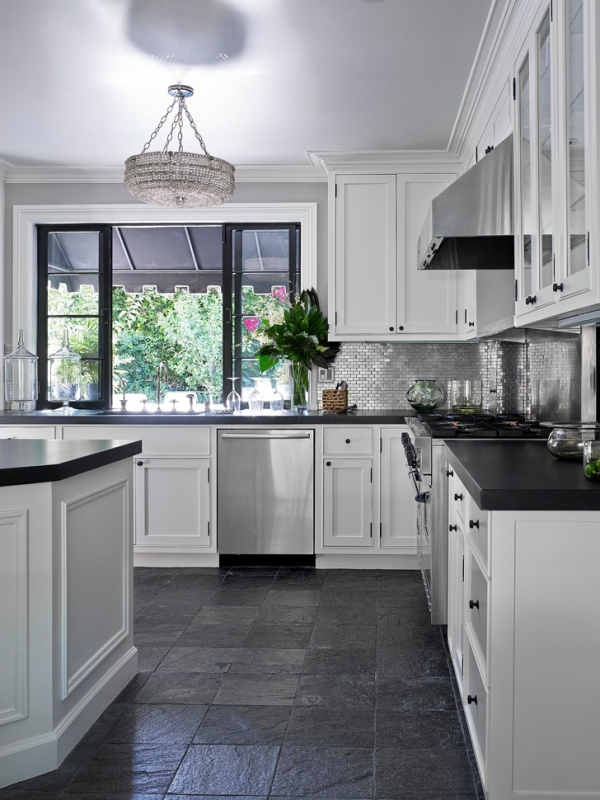 Kitchen. The furniture is made to order. The slate floor has been preserved since its construction. 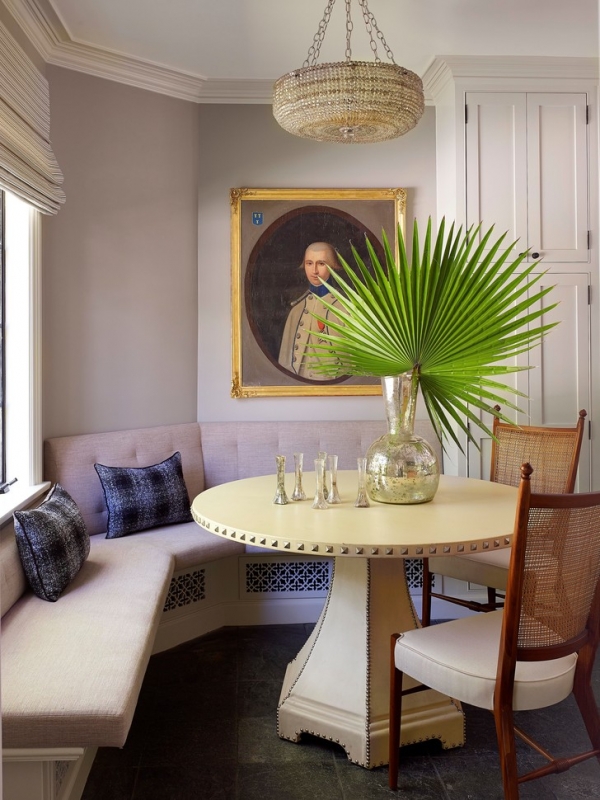 The exterior of the house has changed dozens of times. After studying archival documents, Deno returned the facade to its historical white color. However, the interiors were more complicated. “There was a secret bar, a telephone room, a waiting room for drivers, a private secretary’s office behind the kitchen. All these rooms had their own charm, but their function has long been outdated,” says Deno.

The interiors looked very eclectic. The hall was decorated in the spirit of the “Hollywood Empire”, the living room breathed of France, the small living room resembled a chalet. “I don’t consider it a dissonance or a Disneyland decor,” the designer comments. — Such a mixture of styles is a common phenomenon for old houses, where rooms are updated at different times, but this interior lacked integrity.” 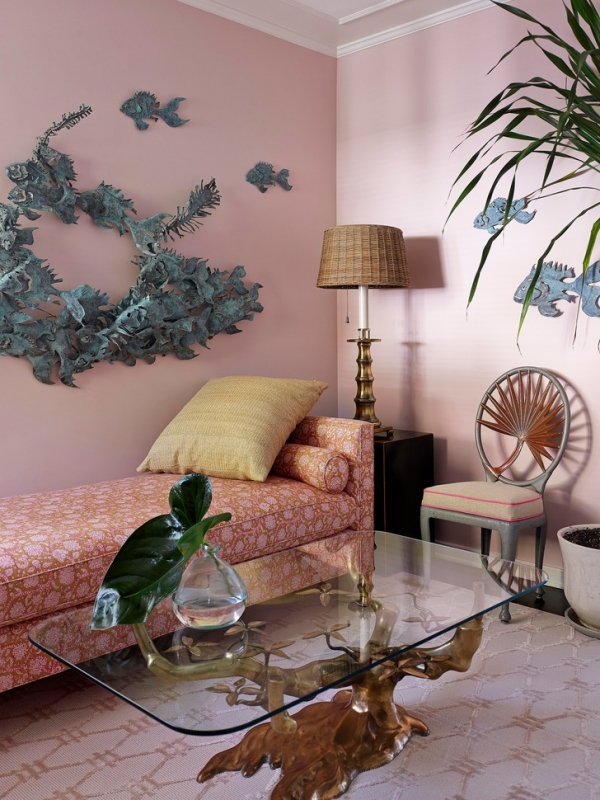 The designer treated the existing architecture with respect, adding only some touches. For example, he supplemented the initially empty walls of the dining room with six plaster pilasters and mirror panels between them. The decorator decorated the new master bedroom with wall panels, a lacquered wood fireplace portal and a Louis XVI cornice. “I was aiming for some carelessness so that the house didn’t look like a museum,” Jean—Louis observes.

He kept the checkerboard floor in the hall, but treated its surface so as to get rid of the mirror shine. The walls of the small living room were painted to match the stonework around the fireplace. “It was the only way to reduce his pressure in the interior.” 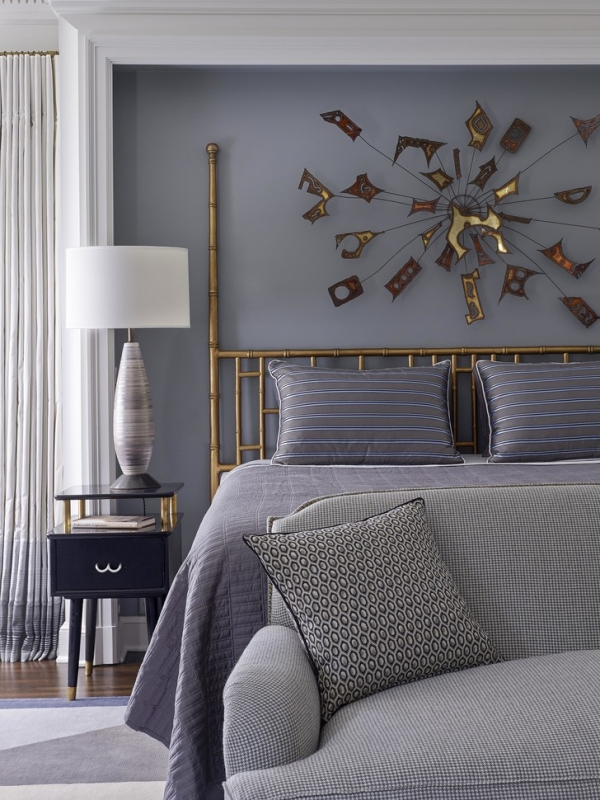 Bedroom. An ebony bedside table, a table lamp and a headboard in the Hollywood Empire style — all from the 1950s. Pillows are sewn from tie fabric, Mood Fabrics. Bed linen and bedspread, Bed, Bath & Beyond. On the wall is a sculpture by Curtis Jere. Sofa, Maison Carlian, 1940s, upholstered in wool and cashmere, Loro Piana.

“I wanted to bring a bit of kitsch into the space. I hope the architect would approve of me” 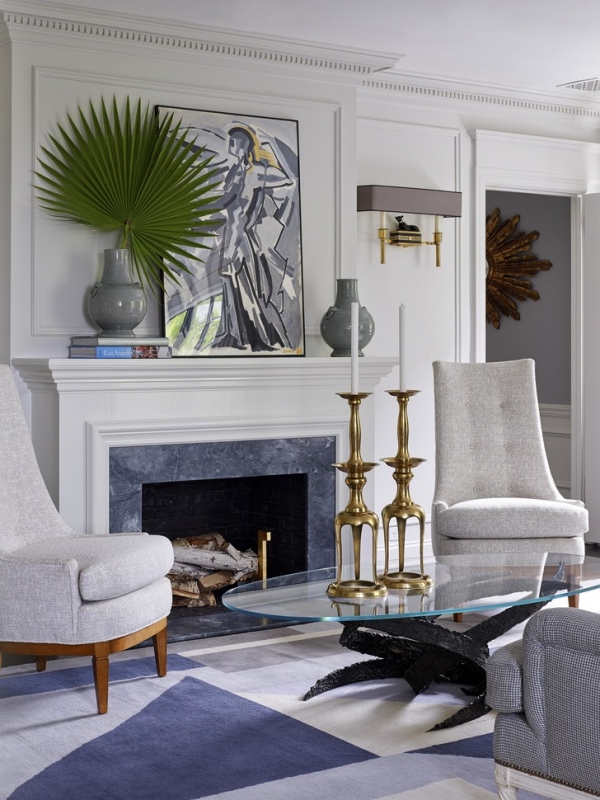 A fragment of the bedroom. Armchairs, designed by Harvey Probber, 1960s, in fabric by Christian Fischbacher. The base of the table was a sculpture by Daniel Gluck. The gouache was bought at a local vintage shop. Sconce, Maison Jansen.

To give the rooms a more glamorous look, the designer laid the floors with custom-woven carpets with geometric motifs. He decorated the walls of the coral billiard room with a sculpture by Curtis Jere depicting a flock of fish among algae.

“I wanted to bring a bit of kitsch into this space,” Jean-Louis smiles. — I hope the architect would have liked it. I worked with Paul Williams’ project in mind, as if he, not me, had to make decisions. I tried to create an atmosphere where it’s easy to imagine a tanned guy by an outdoor pool, a hostess with a martini in one hand and a cigarette in the other, her husband in panama playing chess with a friend. For me, this is the golden age of Hollywood!” 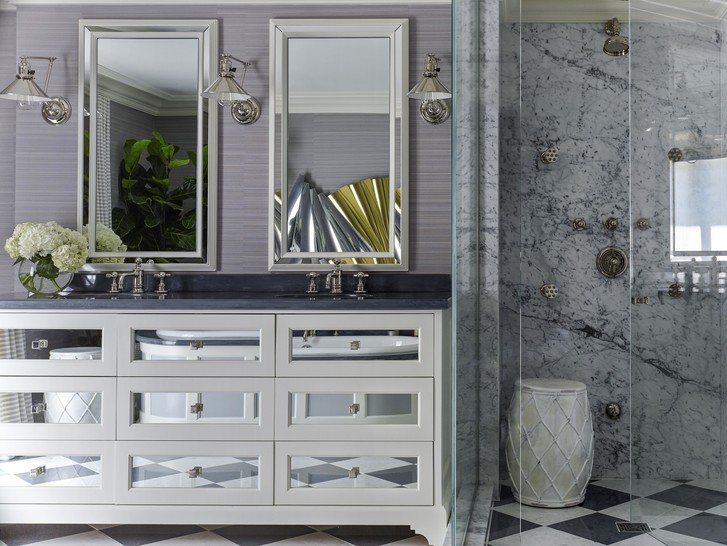 The owners’ bathroom. Cabinet for sinks and nickel-plated sconces, designed by Jean-Louis Deneau. Faucets and showers, Volevatch. The mirrors reflect a bathtub and a wall sculpture by Curtis Jere. In the shower cabin made of blue marble there is a ceramic stool, Pottery Barn.

The author is unknown