Varya Shalito and Lera Nesterenko emphasized the historical value of the building and complemented the interiors with original objects by Russian masters and artists. 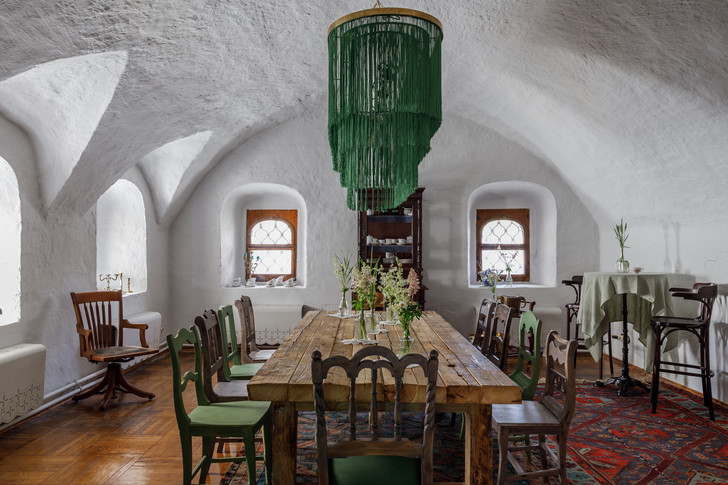 The table is made of antique boards by Alexander Samsonov, Firs company. Green chandelier, diz. Natalia Melnik. Vintage chairs were found at a flea market in the village of Malakhovka. Vintage buffet “Office K”.

The “Leo Tolstoy Chambers” in Moscow, built in the XVII century, is the only surviving structure of Khamovnaya Sloboda, its architecture contains traditional elements of the pre—Petrine time. It is a massive brick building of strict form with white stone vaults.

In 2021, the idea was born to turn the Chambers into a modern cultural center and create a place for people interested in culture and art to communicate. The founders of the project wanted to revive the traditions of secular salons popular in the nineteenth century, to give visitors the opportunity to participate in creative evenings and interesting discussions, to make a gallery where contemporary artists could present their works. 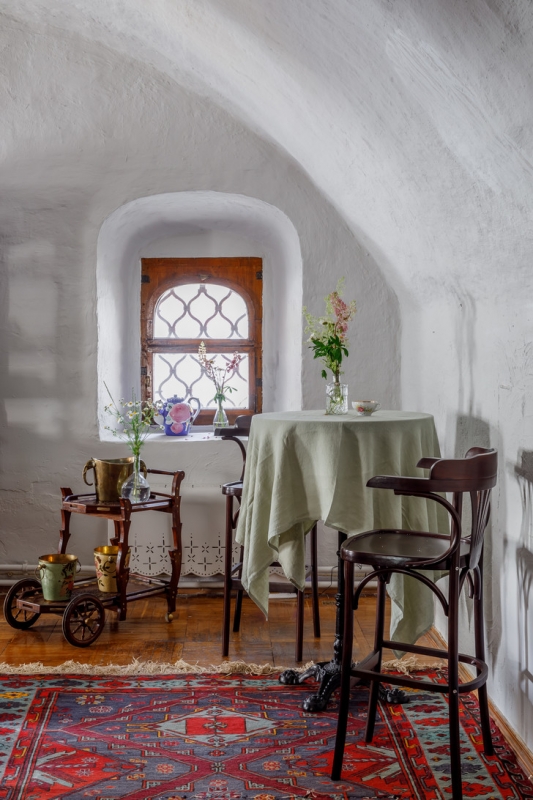 Architect Varya Shalito worked on the project of the cultural center with the help of designer Lera Nesterenko.  They designed functional areas — an entrance space, two lecture halls, two lounge halls, three bathrooms, a dressing room and an art gallery. “It was important for us to emphasize the historical value of the building, to preserve the original details. We added a little color to the white—stone walls of the chambers, painting the gallery area and the upper lounge in a deep shade of green,” the authors of the project say. 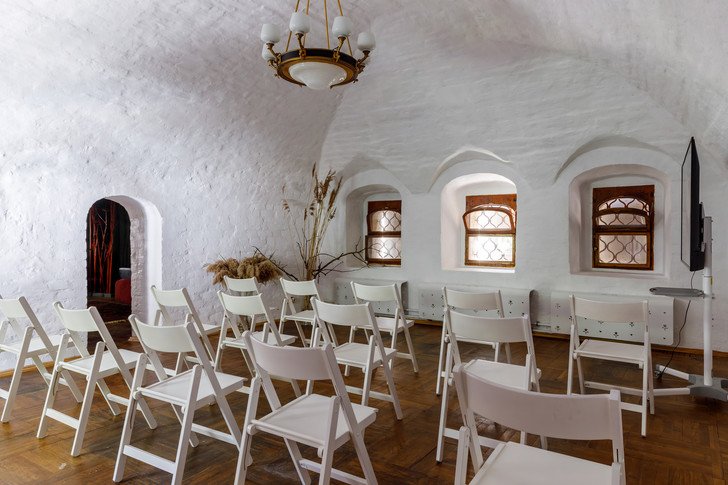 Lecture hall with white stone vaults and walls. A vintage chandelier, Chronosfactor, was hung under the ceiling. Screens on radiators, diz. Sergey Ponomarev and Sergey Grigorovich.

Chambers is a building consisting of two large spaces — a historical building built in the XVII century and an extension of the Soviet era, where the stairs and bathrooms are located. Varya Shalito and Lera Nesterenko did not erect new partitions, giving each hall modern functions. Through the high doors of the main entrance, the visitor enters the entrance area, from where you can go to the cloakroom, bathroom, lower lecture hall and lower lounge with a large table made of old boards. Also at the entrance there is a staircase leading to the gallery space, it is painted in a dark green shade and contrasts with the white arches of the entrance area. 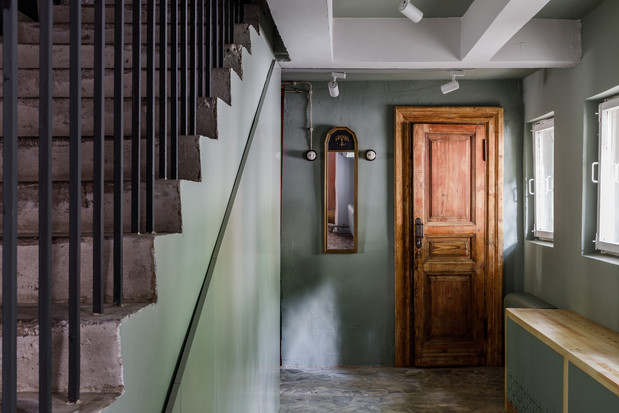 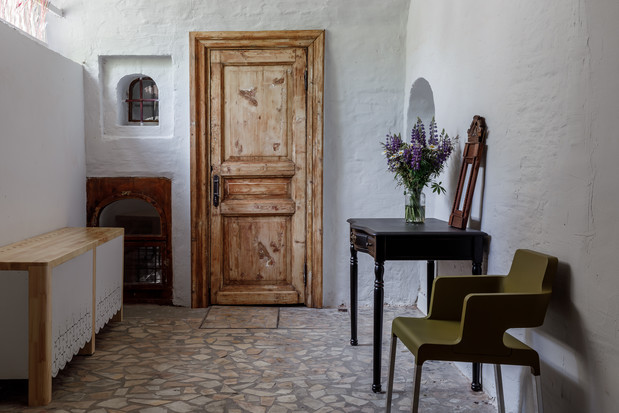 The founders — Maya Santimirova and Tai Tarabrina — have a well-developed sense of taste and style. Maya is the creator of the drawing studio DrawAndGo and a specialist in table etiquette, as well as the author of the channel “Aesthetics of everyday life”. Taya is a producer of photo and video shoots and the founder of the production agency TAYAT.  They took a huge part in the implementation of the project, especially in the final decoration part. Olesya Kulikovskaya, the Executive Director of the Chambers, played an important role in the implementation of the project. The customers had a pretty accurate idea of what they wanted to see in the space of the Chambers. The main purpose of each hall was set initially. The main wishes were to preserve the sense of history, not to overdo the design and add colors to the interior. 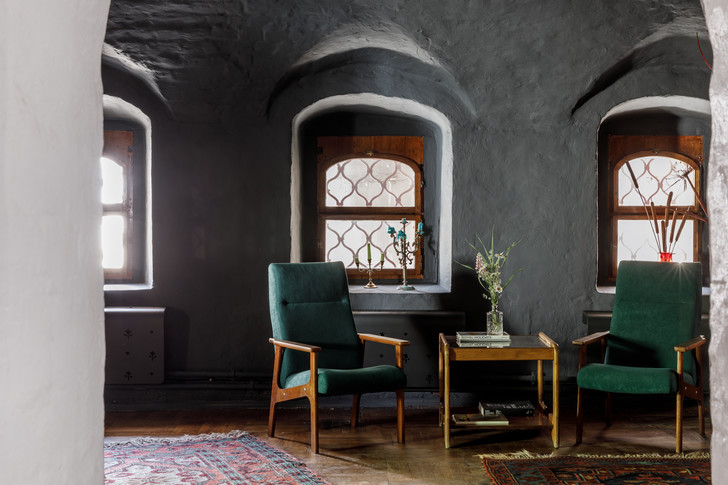 On the second floor there is another lecture hall, a “dark” lounge and a gallery with a passage to a small library hall, where there is a chair woven from 800 meters of rope, as well as two vintage coffee tables in the form of lotuses. 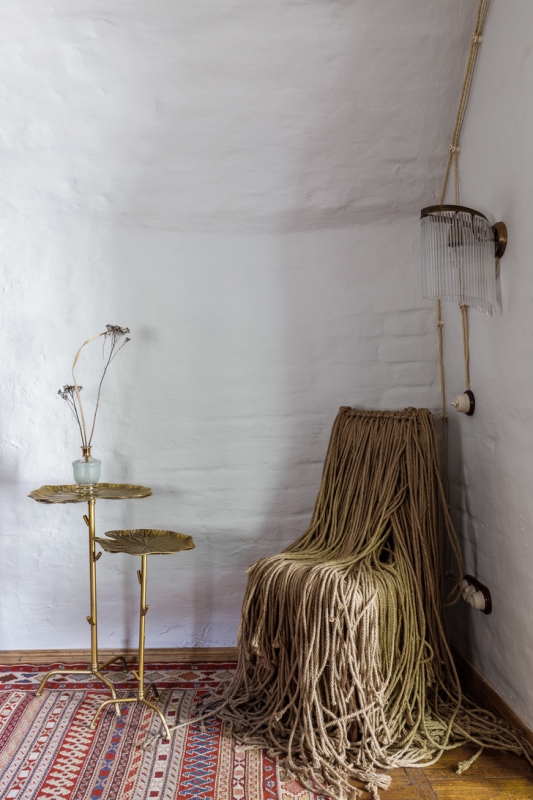 The rope chair designed by Vari Shalito was made by Natalia Melnik. Brass lotus tables, the VamVidnee store. 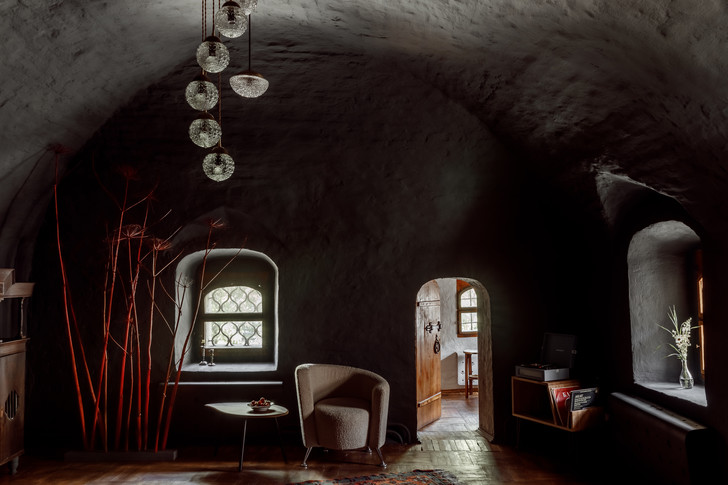 “One of our ideas was conscious consumption, the use of original pieces of furniture with a history. We searched for furniture at flea markets, vintage markets, on Avito, restored it and gave a second life in historical interiors. The large wooden table in the lounge area and the sinks in the bathrooms are made of real antique boards. The lighting was completely chosen in the vintage light gallery. The doors were found and restored specially for the project by the artist Sergey Pogasyan,” Varya Shalito and Lera Nesterenko talk about working on the project.

“It was important for us to support local manufacturers, so many interior items are made by Russian artists and designers”

A large two—meter chandelier in the lower lounge was woven by Natalia Melnik, an artist from Kolomna – she needed about a kilometer of emerald threads. The table is made of antique boards by Alexander Samsonov, Firs company. Vintage chairs were found at a flea market in the village of Malakhovka and restored in the workshop of Andrei Matskevich. Vintage buffet “Office K”.

At first, Varya and Lera wanted to replace radiators that were not of historical value, were modern and not very pretty. But later they decided to paint them in the color of the walls, and cover them with a “tablecloth” made of plywood. The “cloth” covering the radiators embodies the idea of weaving (in the XVII century, the weavers of Khamovnaya Sloboda lived and worked in this building, they made linen cloth and stuffed drawings). Screens for radiators on each floor are made of different colors, combined with the shade of the walls, and at the bottom of the “tablecloth” there is a perforation — a pattern imitating embroidery on fabric. 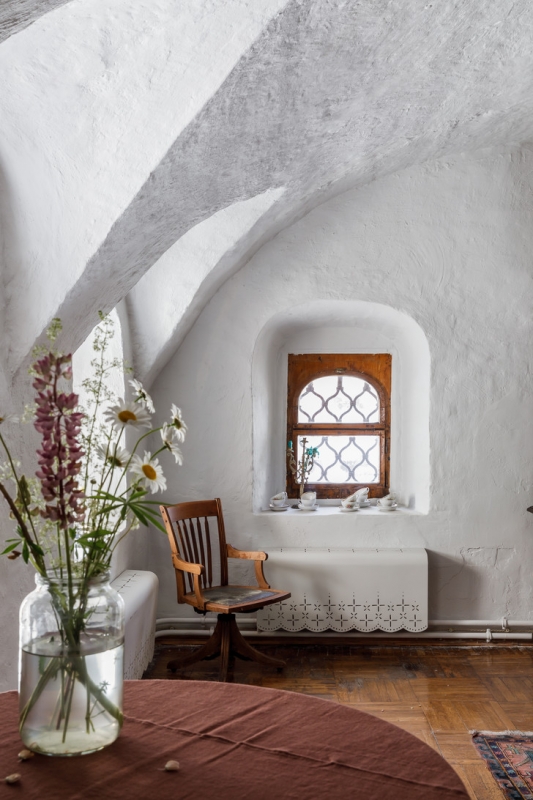 Bathrooms embody the idea of tactility and naturalness of materials. The walls there, as in the rest of the interiors of the Chambers, are covered with decorative plaster of the Russian company GoldShell. The cabinets for the sinks are made of antique boards, and the sinks were chosen with a pronounced texture of river stone. 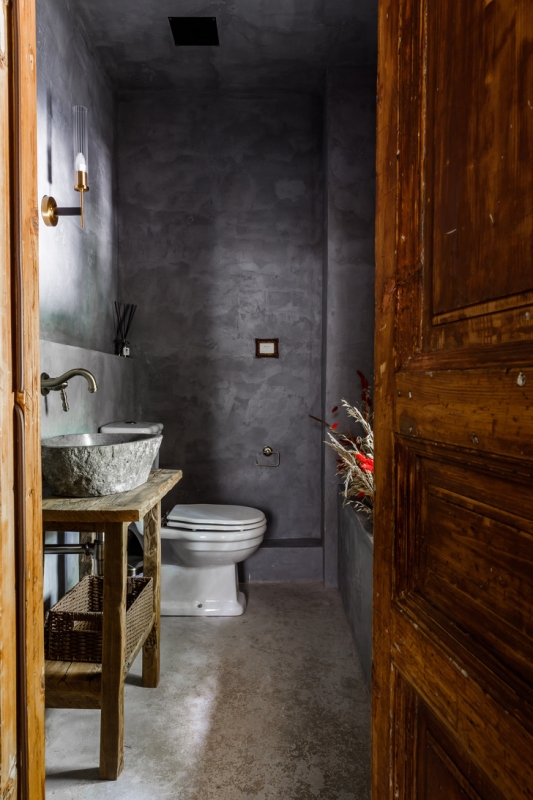 The sinks in the bathrooms are made of antique boards by the Belarusian designer Alexander Samsonov, Firs. Sink made of antique stone and concrete, Stone Tree Studio. Doors, Sergey Poga.

“We are happy that life has given us the opportunity to work with such an object. Being in the walls that have seen and experienced 400 years of Moscow’s history is an indescribable feeling. To feel involved in the revival of a valuable historical space, to give it a new modern function and to see how interiors now live and unite people is something to be proud of,” Varya and Lera say about their project. 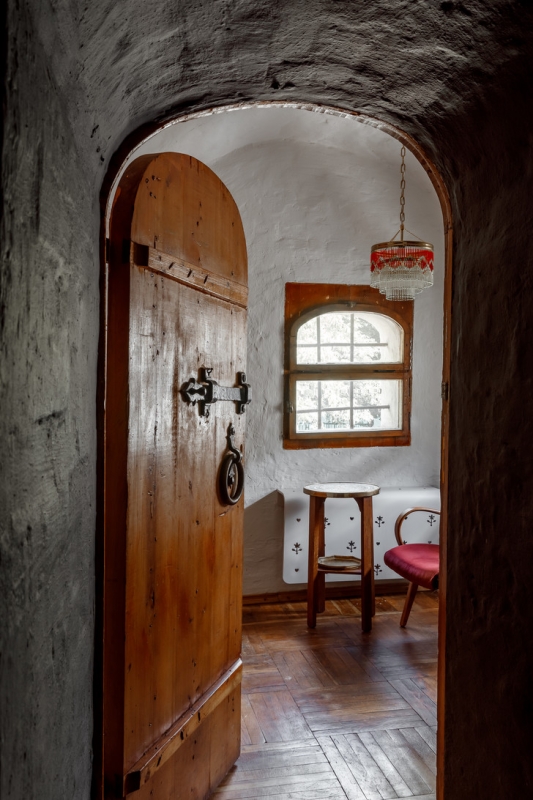