The debut of Charles Zana Mobilier will take place on February 17 at the designer’s new showroom in Paris. 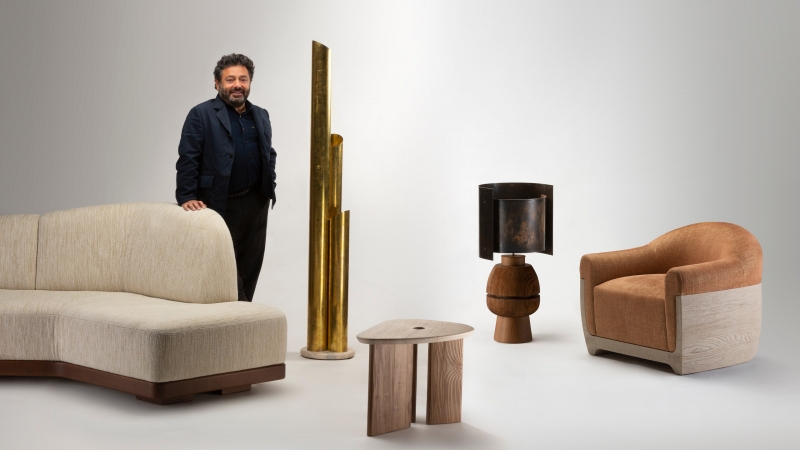 In the lobby of The Mercer Hotel in Soho, as always, there is a clink of coffee cups hitting ceramic saucers. Halfway to his cappuccino, Charles Zana looks around the room, admiring the morning bustle. It’s been more than a year since the French architect and designer from the AD100 list returned to New York, and the plans for this trip are to make up for lost time: a visit to a restaurant on Crosby Street and a residential project near Bedford, then a short trip to a sunnier Los Angeles. But none of these events is a priority this morning.

Putting her cup on the edge, Zana takes a lookbook out of her bag and puts it on the table. It presents 60 models of furniture and light. One half is sketches for clients, and the other half is completely new projects that will be included in the first collection of the Charles Zana Mobilier brand, which is scheduled to launch on February 17 in the online space and in a new exhibition hall in Paris, next to his workshop on Rue de Seine. 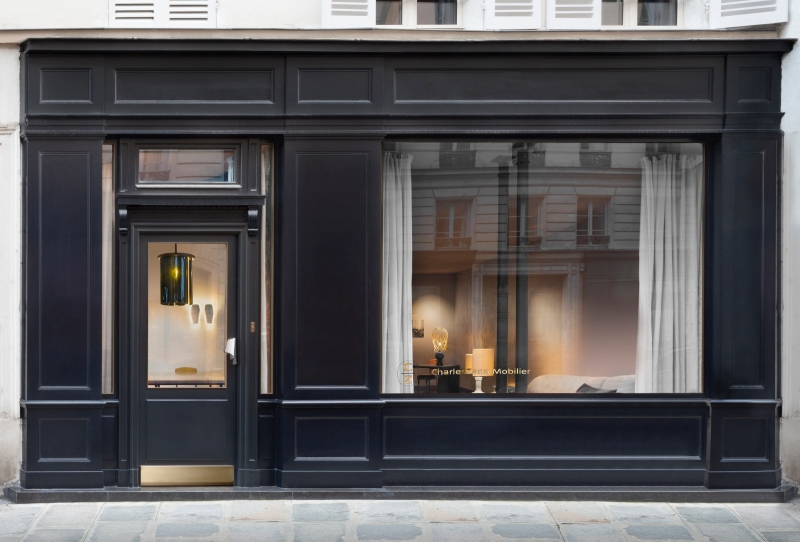 Charles Zana Mobilier will open a showroom located next to Charles Zana Studio on February 17.

“This is a new start, but not the beginning,” says Zana. — For 30 years I have been designing furniture for my clients’ projects. But now we are talking exclusively about furniture, not about projects”” It is worth saying that Charles is perfectly prepared for this: a native of Tunis, raised in Paris, the son of a collector of works of art and design, from childhood he saw objects designed by Pierre Paulin, Jean Royer and Gae Aulenti, who stood in their family room. It was familiarity with their works and interest in design that led Zan to study architecture at the School of Fine Arts. And after three decades of designing residential and commercial spaces, he said“ “It feels like a renaissance. I’m going back to my first love.”

This love can literally be felt thanks to the intentionally tactile palette of furniture and light, ranging from hard matte oak to patinated bronze, smooth black marble and travertine to velvet and suede upholstery. ”It’s very sensual, and I like it,” says Charles. 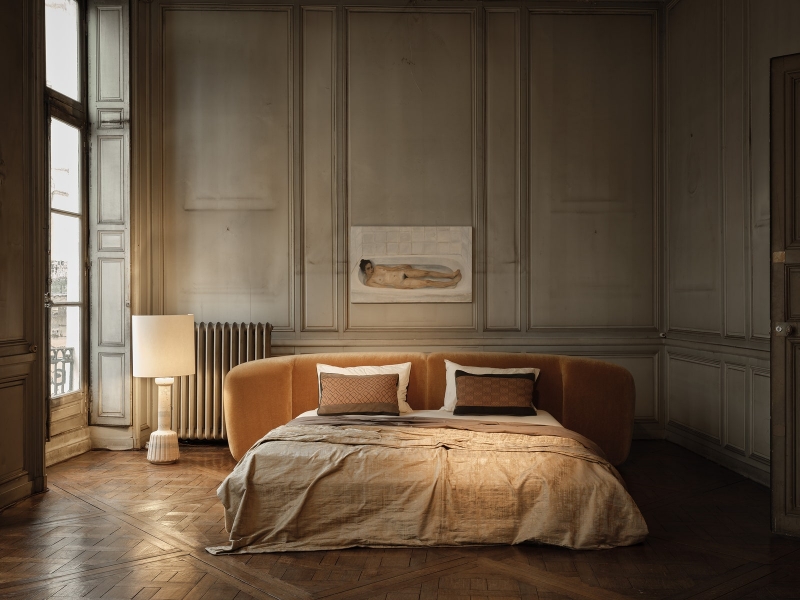 The Minos table lamp is located next to Teddy’s headboard.

Take the Minos lamp, where the vertical finish along the travertine base creates a grooved texture. There is also the Warton armchair, inspired by the works of American artist Wharton Esherick, and the Frank Bridge armchair, which recalls Charles’ love of playing with proportions. Both chair frames made of patinated bronze are surprisingly thin and elongated, as if it is molten glass that quickly took shape before it cooled down. 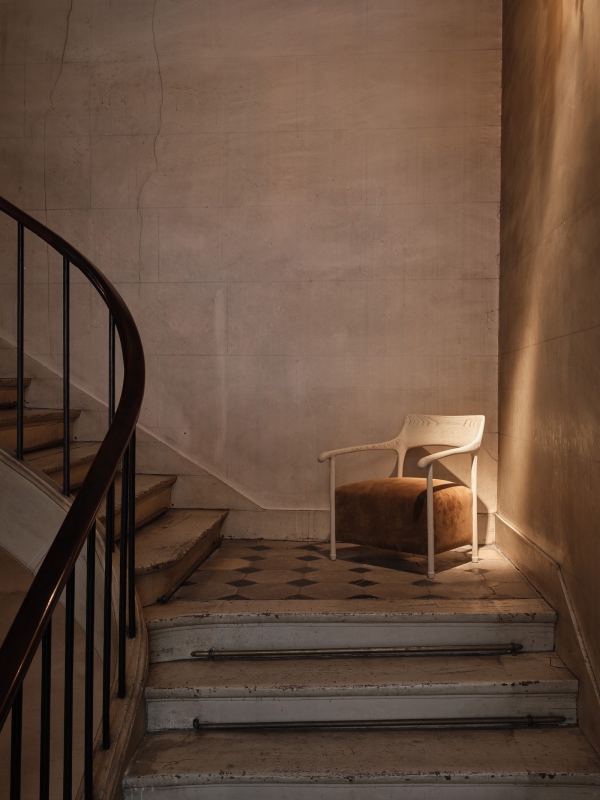 Frank Bridge armchair in a frame of brushed oak and patinated bronze.

In Charles’s furniture, a minimum of decor is a tribute to the shaker style, which the designer foresees as the next trend, believing that after the pandemic, people will want to return to real handmade work. But still, there is one motif in the collection that repeats throughout the series — this is the infinity curve. For a designer, this is more than just a functional detail. “It’s an endless symbol of love”” An emblem of tradition, a symbol of French craftsmanship passed down from father to son.

“When a thing is made by a man, it has a soul. And I firmly believe that people will like modern furniture made using traditional technologies,” says Zana. – This is a new luxury. And it is not in order to complicate production, but in order to traditionally walk through textiles, metals, wood with the motto “less is better, but better”. 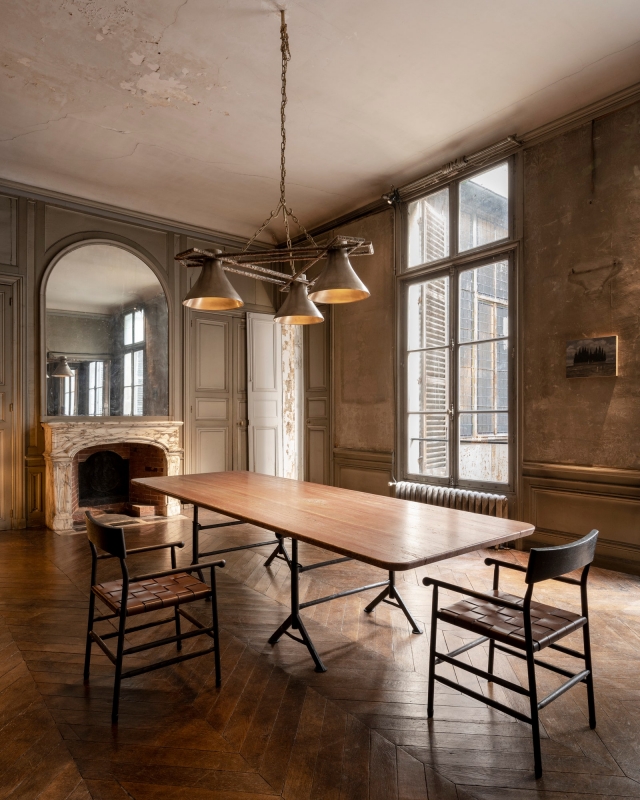 Warton chairs and Ispahan table, which has a Persian red travertine table top. Above it hangs an Archipel chandelier made of patinated bronze.

Last fall, during the FIAC Art Fair in Paris, Zana already tested his theory by offering a first look at Mobilier at an exhibition called Ithaque. The 18th-century house became a poetic backdrop for exquisite design – Charles’s interiors were replete with faded silk wall coverings and scuffs and complemented the paintings of the French artist Nathanael Erbelin.

At this time, the morning bustle of The Mercer Hotel has already smoothly moved into the dining room. Therefore, raising his voice to shout over the crowd, Zana recalled the weeks preceding the exhibition. “When you do such an exhibition, you imagine yourself naked—” he said. —When you talk about furniture, you represent a part of yourself, and all you can do is step aside and show something finished.”