Designer Ksenia Lysenko designed a bright, functional apartment in Krasnodar for rent. Despite the small area, it can comfortably accommodate a family of three or more people 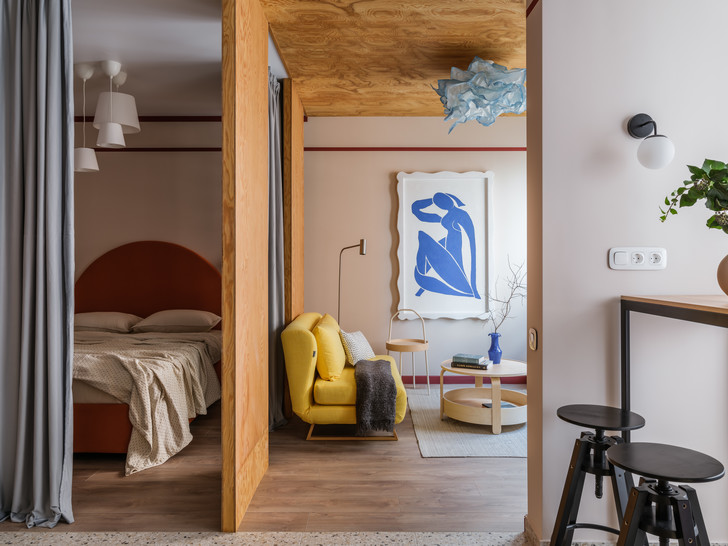 The customer, a young woman, asked to turn her “one-bedroom” into a cozy space with different functional areas for subsequent rental. The concept was born immediately: designer Ksenia Lysenko decided to make the house the same as its owner: calm, but at the same time cheerful and extraordinary. And as a starting point, she used the style of Fauvism and the work of the French artist Henri Matisse (Henri Matisse). 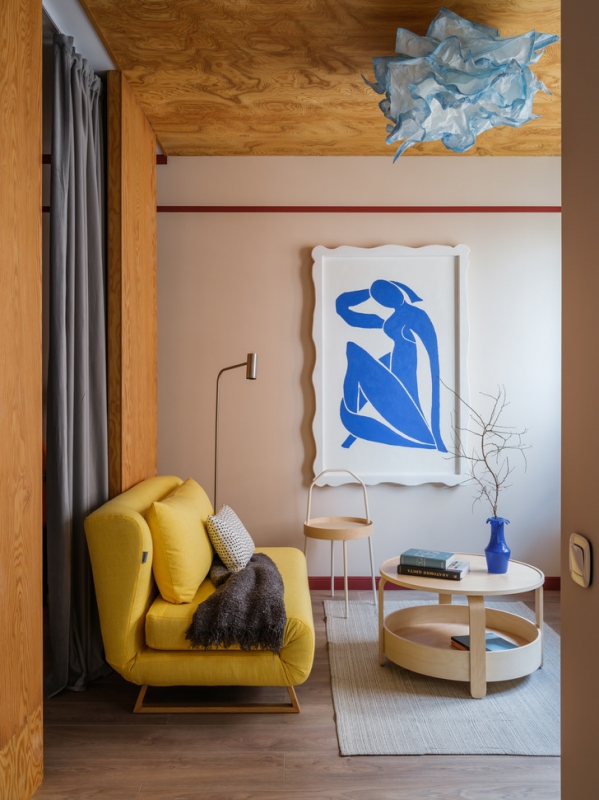 In order for the apartment to be rented out, an additional sleeping place was made in it — a folding sofa in the living room, and a relaxation area with soft banquettes was arranged on the windowsill. Now a family of three or more people can comfortably accommodate here. The plywood-covered ceiling and the plywood partition between the living room and the bedroom add comfort to the interior and at the same time visually distinguish the living room area from other rooms of the house. 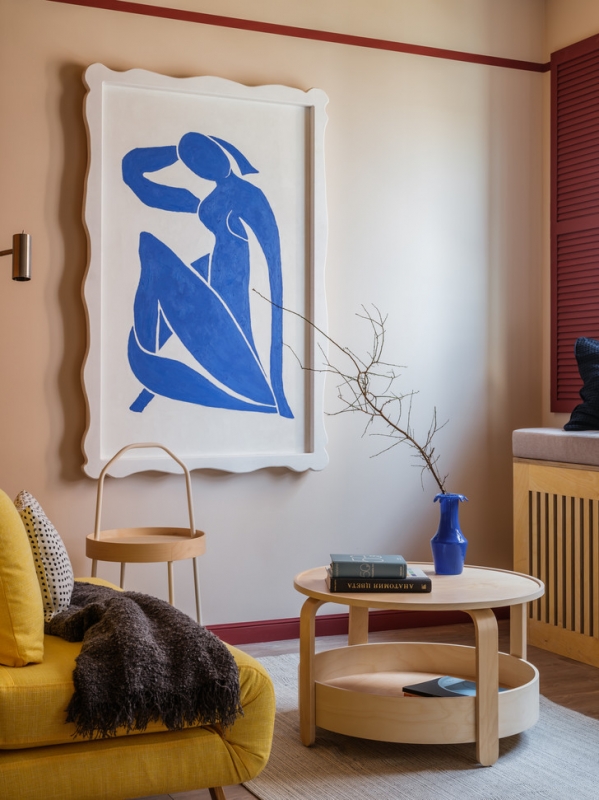 In the kitchen, it was decided to abandon the bulky upper cabinets and paint the surface with an original geometric ornament that flows from the wall to the hood built into the rectangular box. Transparent glass is used instead of traditional tiles on the kitchen apron, and a compact bar counter performs the function of a dining table. All this allows you to save useful space and visually facilitate it, creating the illusion of spaciousness in a small room. 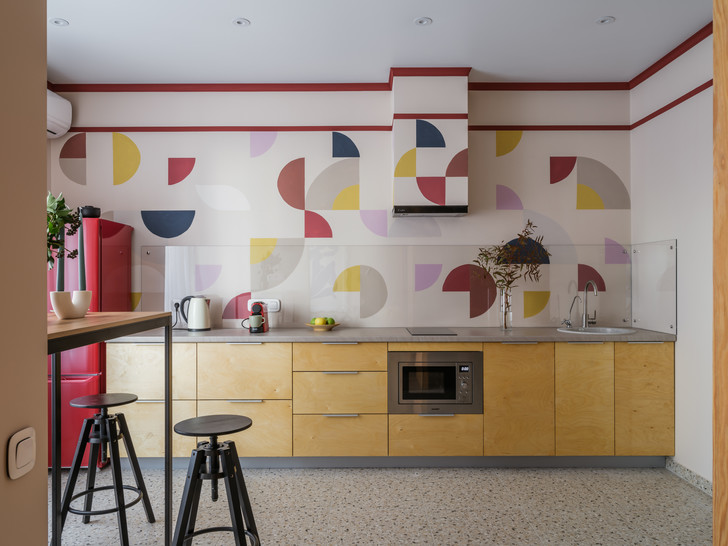 The bedroom is fenced off by a thick curtain and a plywood partition with a beautiful, pronounced texture that echoes the ceiling in the living room area. The brick-red headboard of the bed is supported by red horizontal stripes on the walls: these accents distract attention from the small dimensions of the room. 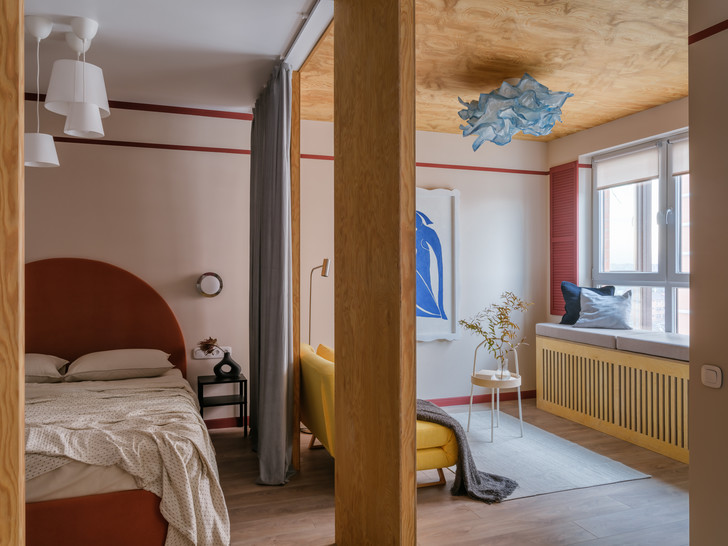 The bed, Askona. The headboard is made to order according to individual sketches of the designer. Sconces, IKEA.

The bathroom is decorated in a bright, summer terracotta-red palette. At first, this shade seemed too catchy to the hostess, so the paint was supplemented with beautiful white mosaics and tiles, achieving a harmonious interior that everyone liked. 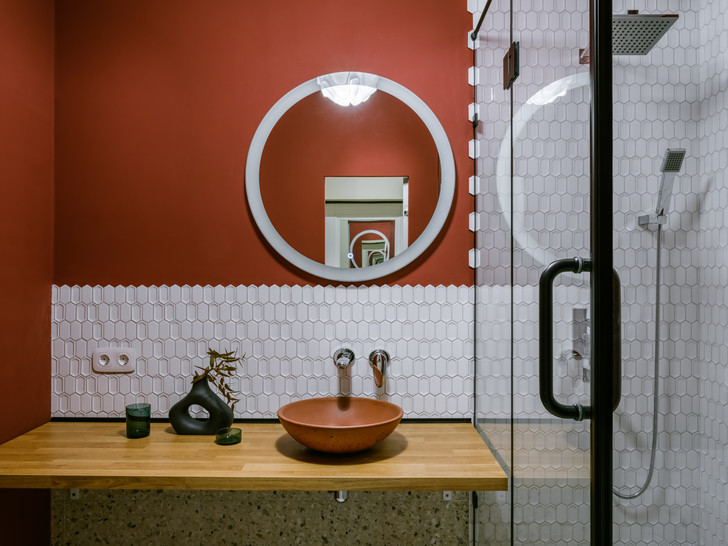 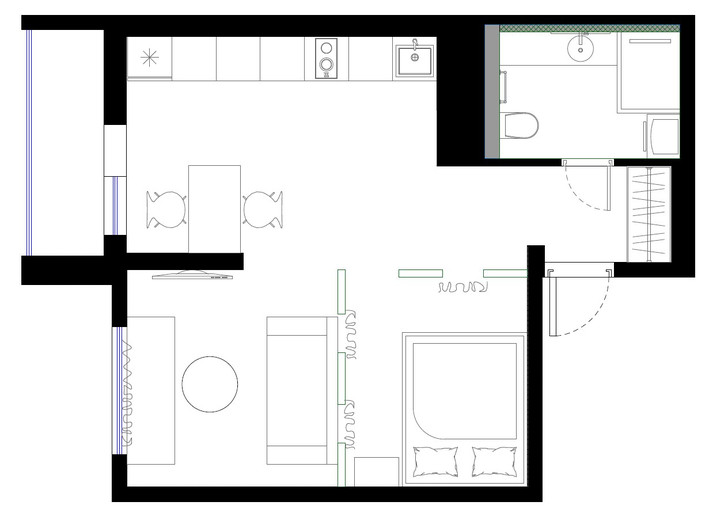 Apartment in Krasnodar. The project of Ksenia Lysenko.