What can make the owner of the house hang in his living room a portrait of a great-grandmother the size of the entire wall? The answer is in the new project of the Italian design duo Roberto and Ludovica Palomba Palazzo Daniele in Puglia 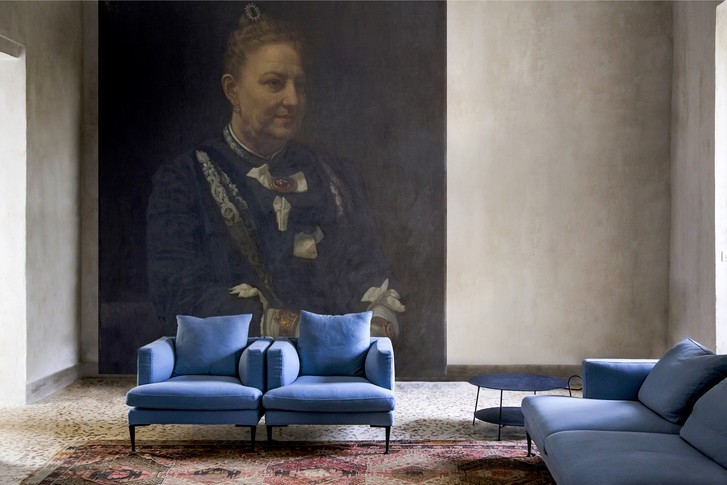 Living room in the right wing of Palazzo Daniele. The portrait depicts the first owner of the palazzo — the great-grandmother of the current owner Francesco Petrucci. Lirica armchairs, Carmina coffee table, designed by Ludovica and Roberto Palomba, Driade.

The tiny village of Galliano del Capo, right on the tip of the heel of the Italian boot, until recently, few people were interested. Until Francesco Petrucci, the founder of the non—profit association for the support of contemporary artists Capo d’ARTE, took up the case, who decided to remember the roots, restore the family nest and return the popularity of the city of his ancestors.

“My relatives first settled here at the beginning of the XIX century. They built a palazzo on the town square in 1861,” he says. “It was the year of the unification of Italy. The house was luxurious: two wings, six bedrooms. The ceilings were painted manually. Unfortunately, the next generations moved to large cities, did not take care of the house, and it fell into disrepair. I myself have lived abroad for a long time, but at some point I decided to return. The purpose of life for me was the revival of this place.” 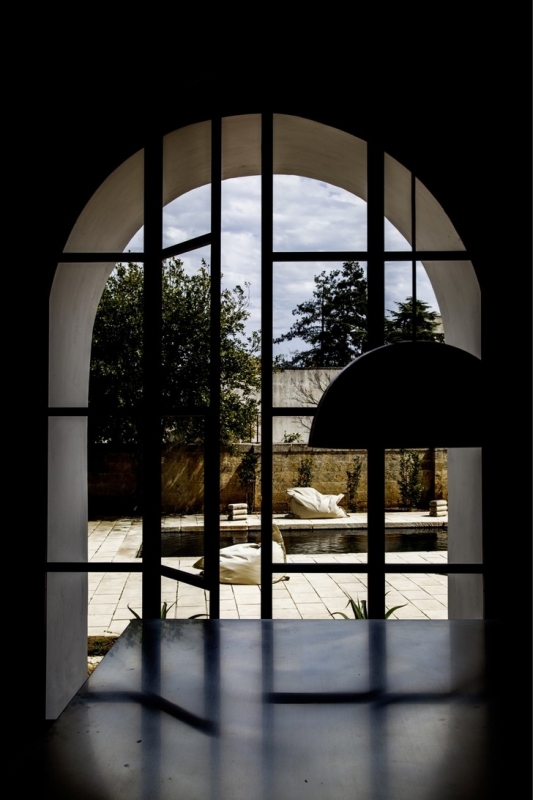 Exit from the kitchen to the terrace to the pool. 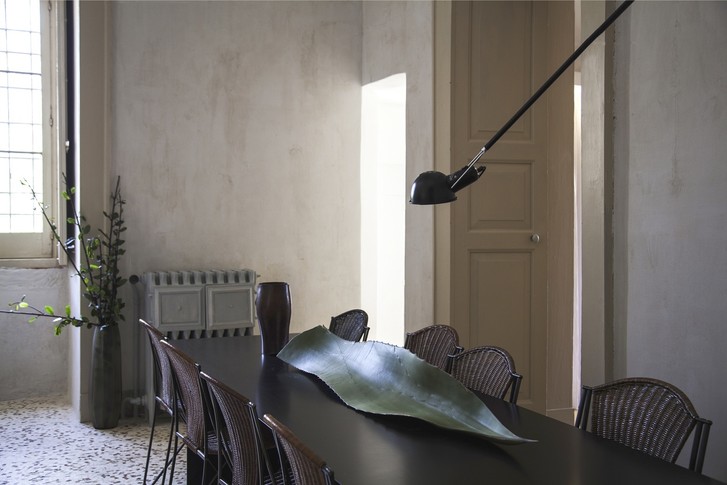 Francesco’s idea is to create special conditions in Galliano del Capo for young and progressive talents who would attract tourism and investment to the city. “This gives artists the opportunity to work in unique conditions — the landscapes with cliffs and endless olive groves of Puglia are simply amazing, and the locals will see what is happening outside their city,” says Francesco. At the moment, Kader Attia, Rossella Biscotti, Yang Fudong and other artists have already participated in the project. The cultural center in the renovated village is the restored Petrucci House. 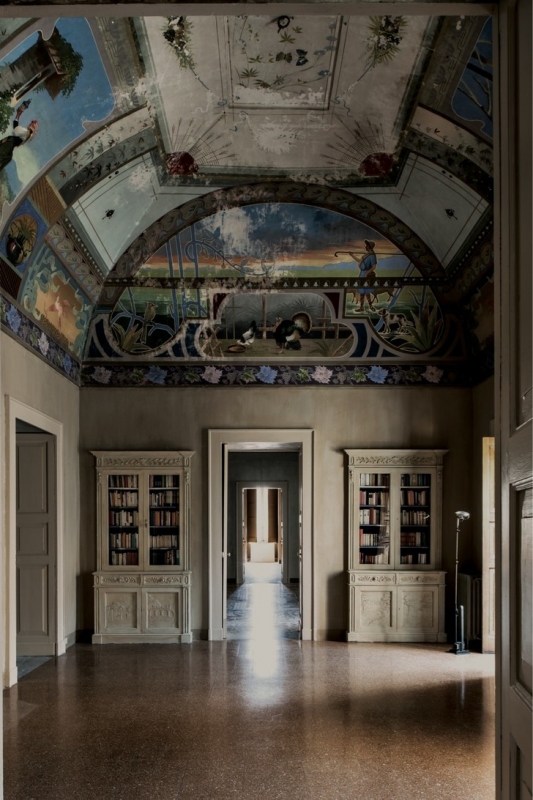 Library. The murals of the palazzo were restored by a whole team of specialists.

There are many different plants in the garden. Milkweed tree blooms from April to June.

Palazzo Daniele can become a place of real pilgrimage for lovers of not only art, but also design, as the interiors were handled by the stellar Italian duo Ludovica and Roberto Palomba. “We are friends with Francesco, and he asked us to supervise the restoration of the right wing of his palazzo,” says Ludovica. — We immediately liked the idea of building a bridge in the interior between the past of this house and the present. The space is used for the exhibition of works by contemporary artists, thanks to Francesco’s initiative, it is a new outpost for creativity without borders.”

“There are traces of a bygone era everywhere: even the rings to which horses were tied have been preserved” 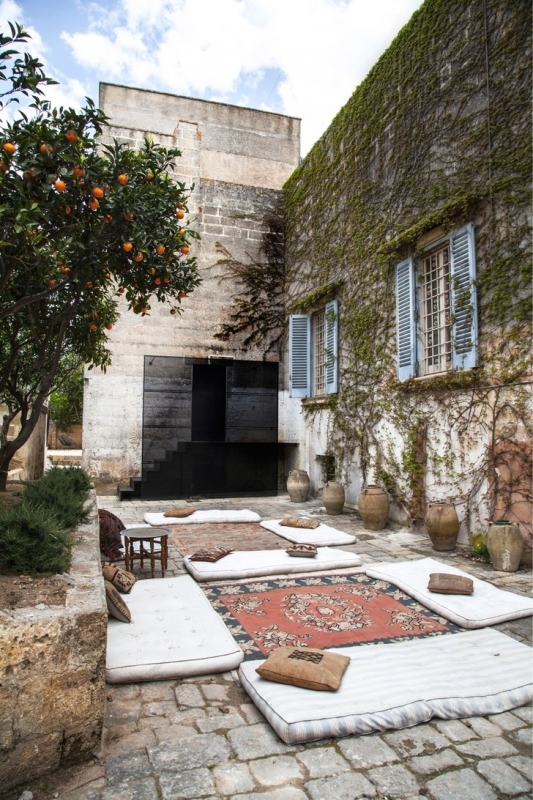 The courtyard. The perforated metal of the panels masking the entrance contrasts with the old stone of the facade, which has turned green with time. 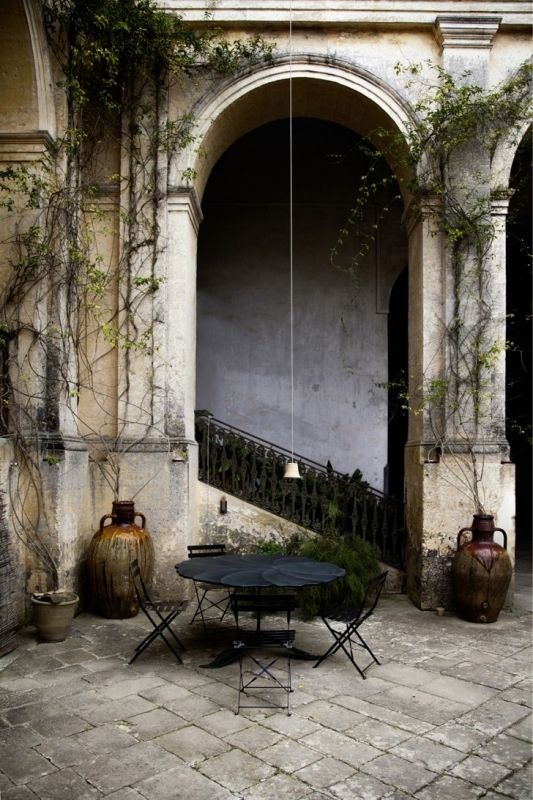 The patio is a secluded place in the garden where you can hide from the sun and enjoy the silence. 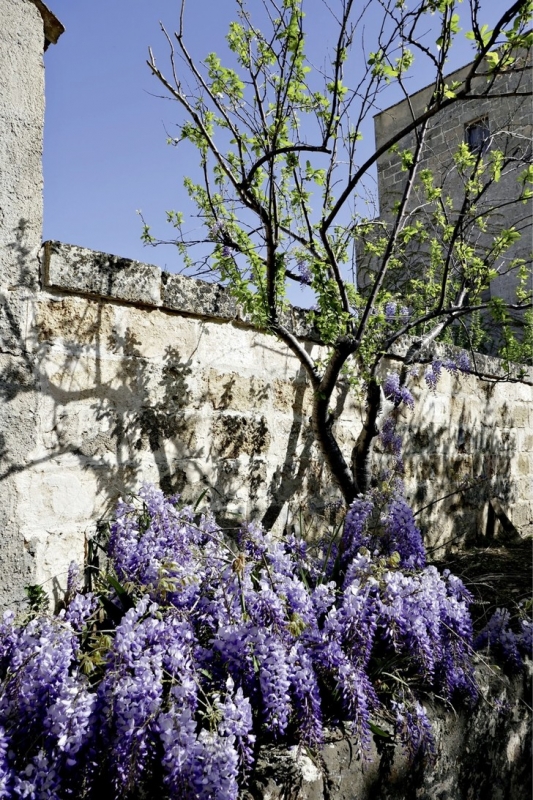 The centuries-old walls, covered with bougainvillea, keep the imprints of the past.

The first stage was, of course, a large-scale restoration. In order to perfectly recreate the majolica of the XIX century and ceiling frescoes, the Palomba couple attracted the best specialists. “We deliberately used a minimum of furniture, leaving room for art,— says Ludovika. — On the other hand, there are some quite utilitarian things in the interior — a bed, a sofa, a table, chairs, indicating the purpose of the rooms. With a ceiling height of 6 m, objects acquire a different scale, weight and meaning.” Even the font bowl in the bathroom is perceived as part of an art installation — water jets descend into it directly from the ceiling, creating the illusion of a waterfall. A fascinating sight! 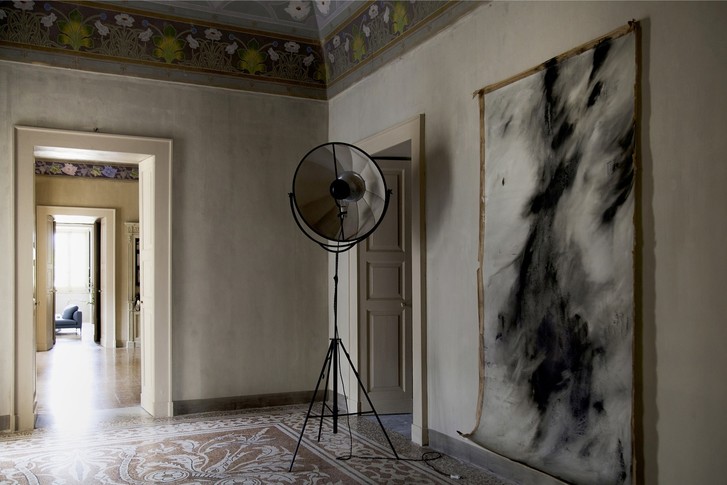 Living room. The Fortuny Lamp floor lamp is a modern version of the legendary Mariano Fortuny model with a lampshade made of Rubelli, Pallucco fabric. The canvas of the South African artist Alexandra Karakashyan. The painting on the ceiling has been carefully restored.

The bedrooms, because of the minimal decor, resemble monastic cells. The role of the lamps is played by the lightboxes of the artist Simon D’exei. “I wanted to preserve a certain sacredness here, the “sacredness of emptiness,” as our customer once aptly put it,” says Roberto.

“With a ceiling height of 6 meters, objects acquire a different scale and meaning” 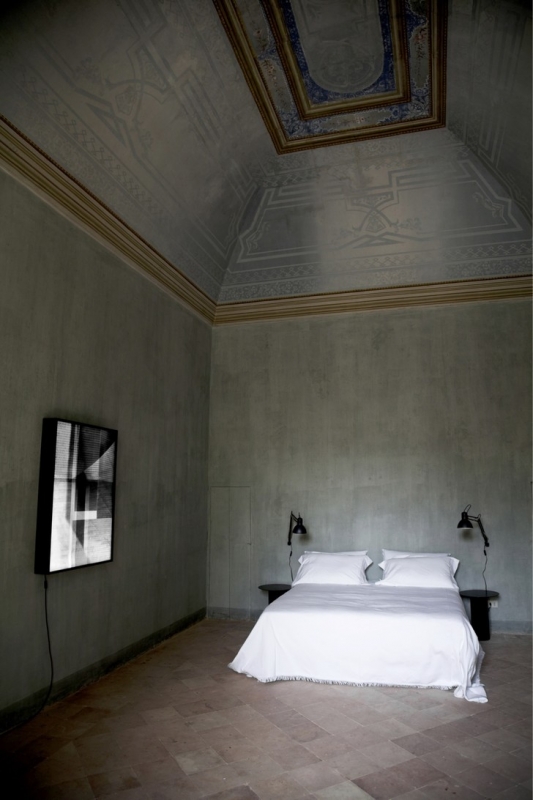 Bedroom. The role of lamps is played by the lightboxes of the artist Simon D’exei.

In the living room, all attention is focused on a giant portrait, on canvas depicts the first mistress of the palazzo, the same great-grandmother of Francesco on his father’s side. Interestingly, the same portrait, but in a more modest size, hangs in the kitchen. The great-grandson even posted this photo on Instagram (an extremist organization banned in Russia) @palazzo.daniele, not without irony, writing under the post: “Has she ever cooked?” (Eng. “Has she ever cooked at all?”). “Sometimes I think that there is a close connection between us,” says Francesco. — He and his great-grandfather built a hospital in Galliano del Capo, I’m trying to build a “gallery” of contemporary art. Although these things seem incomparable, I want to believe that the seeds planted today will give new shoots.” 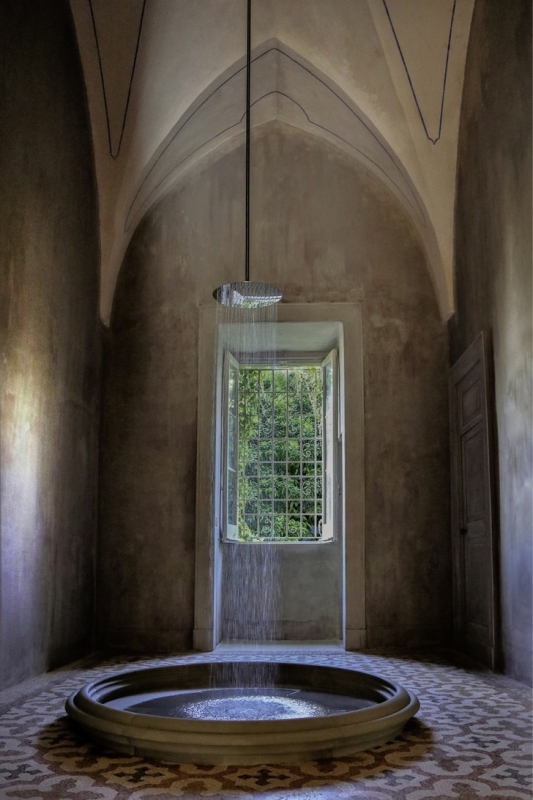 Bathroom. The shower head is attached directly to the ceiling (at a height of 6 m). The cup-font, designed by Andrea Sala, Pietra Serena.