There are not many houses in the world that have become the main characters of films. However, the real story of Villa Necchi-Campiglio was no less exciting than any movie 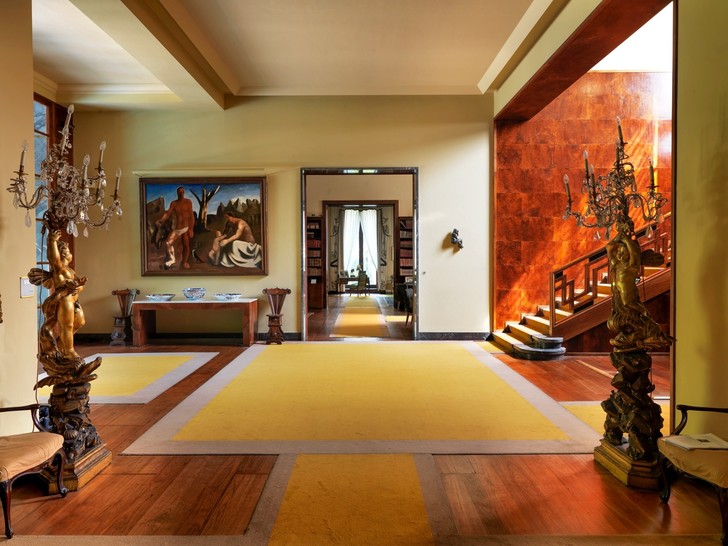 The main hall. From here, the enfilades of the state rooms depart in both directions. A wide staircase leads up to the private area.

Luca Guadagnino, director of the film “I am Love”, released in 2009, described the residence of the Necchi family as follows: “This house is like a ship of fools: it was built in the pre—war era, when the whole world was bursting at the seams, by people who, shutting their eyes tightly, kept saying: “We — salt of the earth! The future belongs to us.” It was no accident that he chose this building for the filming of his drama about how the hidden passion of the heroine Tilda Siunton led to the inevitable collapse of a family of aristocrats who fell under the weight of their own arrogance. “My heroes even have the surname of Rekki, almost the same as the owners of the house, but this is absolutely a coincidence!” says the director. 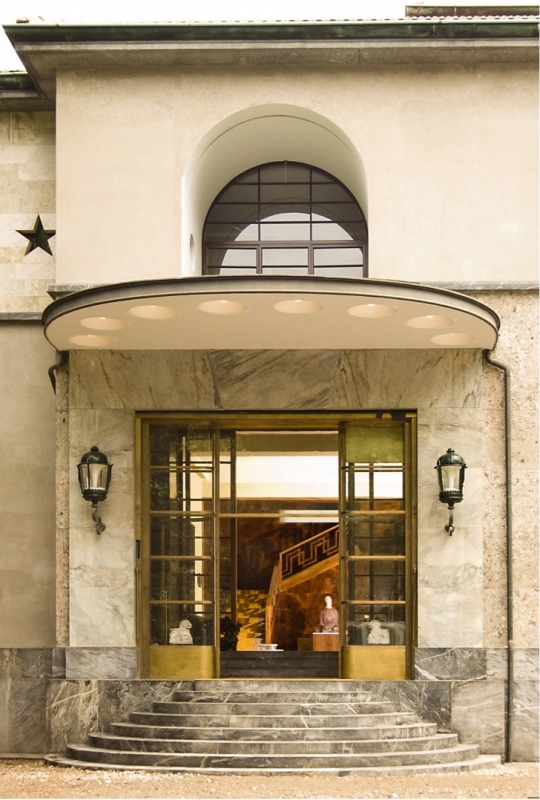 From Mozart Street, the entrance to Villa Necchi is not visible, it hides in the depths of a luxurious garden.

“This house is like a ship of fools: it was built in the pre-war era, when the whole world was bursting at the seams” 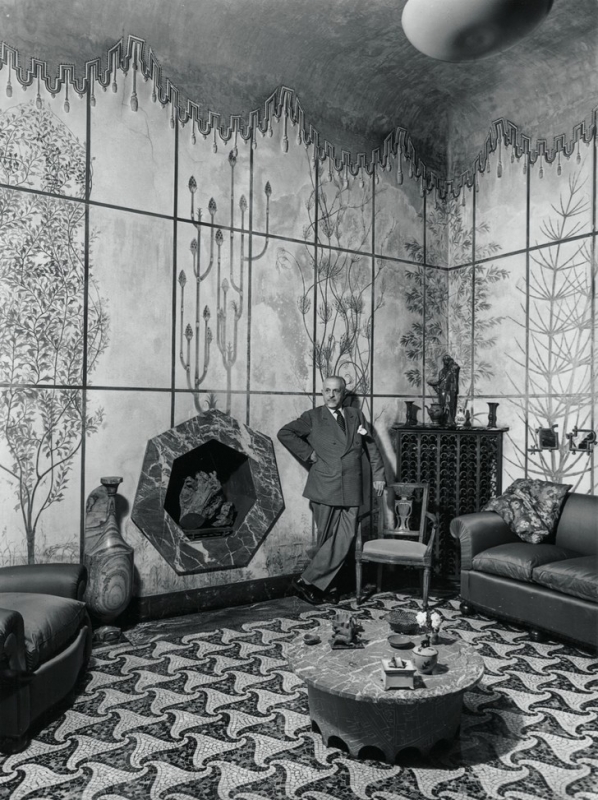 The fate of the Necchi-Campiglio family, although not as melodramatic as the heroes of the film, but for a series about the life and customs of Milanese high society, it would be quite suitable. In the XX century, the Necchi family, who made a fortune in the production of sewing machines, entered without a male heir. Two sisters, Gigina and Nedda Necchi, had to find husbands who could own and manage Paduan factories with dignity. Only one was lucky — Jijina. She married Angelo Campillo, the youngest scion of an impoverished aristocratic family, distinguished not only by a sonorous name and refined manners, but also by an outstanding business acumen. There were rumors that the heiress of millions had recaptured the groom from her sister. By the way, Nedda never got married and lived in the same house with Angelo and Jijina all her life. 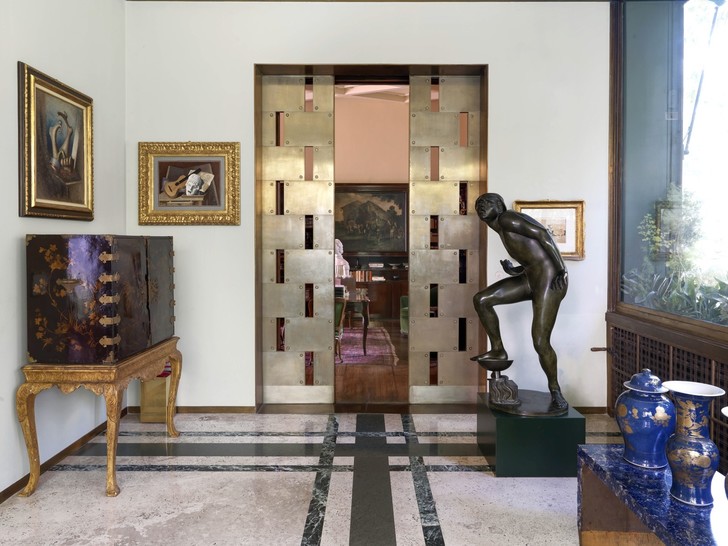 The winter garden room is separated from the main rooms by sliding metal doors.

It was Nedda who came up with the idea to build a villa, which later became the main pride of the Necchi-Campiglio family. For this ambitious project, the fashionable architect Piero Portaluppi was invited, who not only built and decorated a giant two-storey house, but also furnished it with furniture according to his own sketches. Outside of Italy, the name of Piero Portaluppi is little known to anyone. All the laurels of the founder of Italian modernism went to his contemporary Joe Ponti (Gio Ponti). The choice of history is not accidental: the style of the Portal is much less defined and unambiguous. 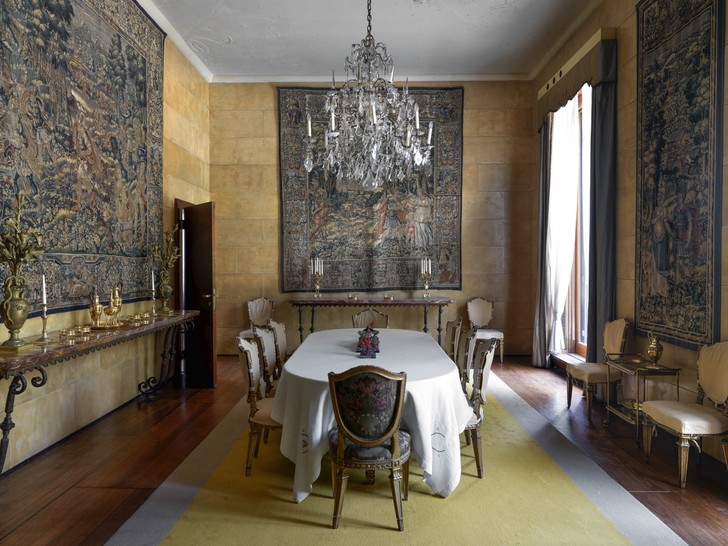 The appearance of the formal dining room changed in the 1950s: decorator Tomaso Buzzi decorated it with a 30-horn crystal chandelier and tapestries. 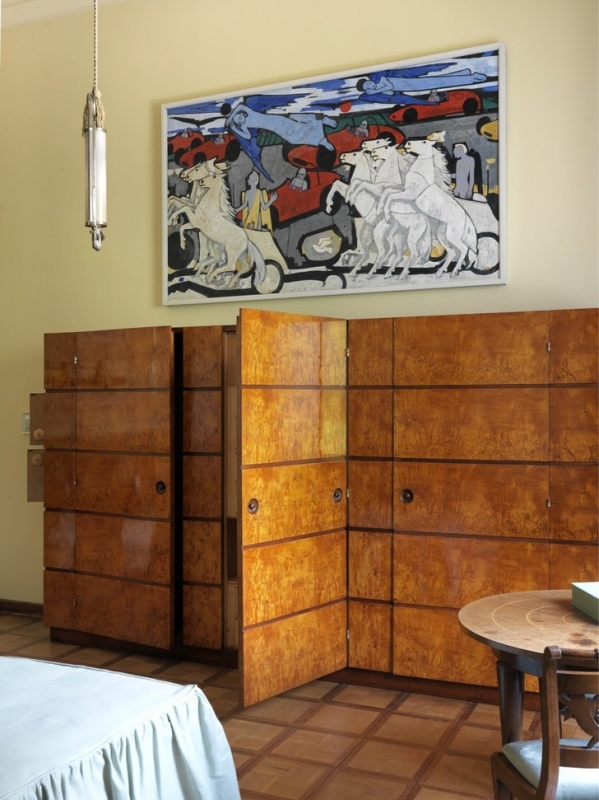 The closets in the dressing rooms, as well as most of the furniture in the house, are made according to the sketches of Portaluppi.

Standing in the giant front hall, from which the enfilade lines open in both directions through high doorways, it is not immediately clear whether you are in a classic mansion of the late XIX century, which was rebuilt to the taste of the new owners, or in a proto-modern villa with a strong admixture of Art Deco and even Art Nouveau. The word “eclecticism” as applied to Portallupi’s works is by no means a curse, but only a statement of the fact that he built in an era when “modern architecture” had not yet turned into an intellectual study and was a synthesis of styles and the experience of generations. 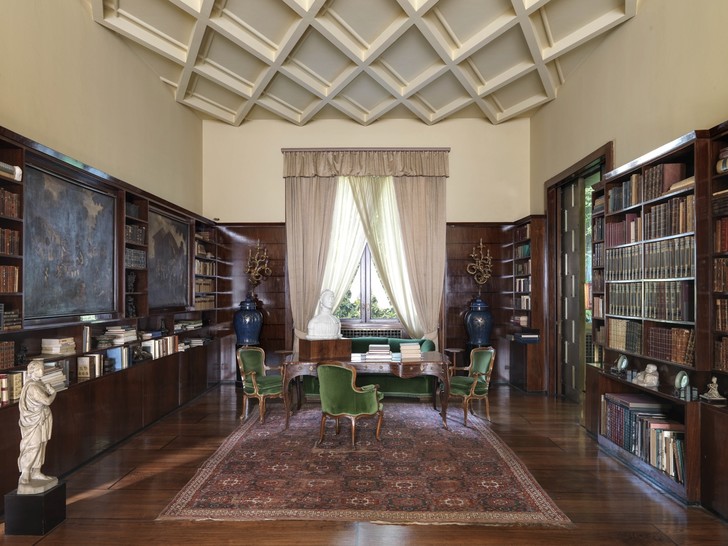 The asymmetrical ceiling pattern in the library, invented by Portaluppi, is a tribute to Italian Gothic.

The Necchi-Campiglio mansion was packed with technical innovations — the first private heated swimming pool in Milan was arranged here, the first garage for four cars, lifts were built into the walls to facilitate the work of servants. The enfilade rooms were separated by sliding partitions — such a system was very convenient for numerous receptions and parties, for which the Necchi were famous throughout Milan. At the same time, the interior was restrained, without frivolity of forms, without a hint of pretentiousness and ostentatious brilliance. 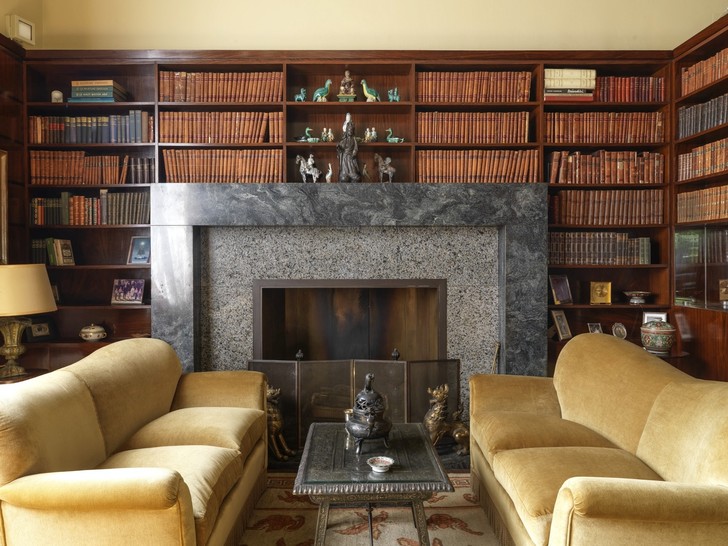 Smoking room. The giant fireplace portal is made of two types of gray marble.

Meanwhile, the cost of the project at that time was cosmic: translated into dollars — about 18 million. But the Necks did not think to limit the architect’s imagination with reminders of the estimate. And even when the architect called as many as thirty highly skilled workers to create a ceiling in the library, the head of the family signed the check without looking. By the end of construction in 1935, the whole city was already talking about the miracle villa. 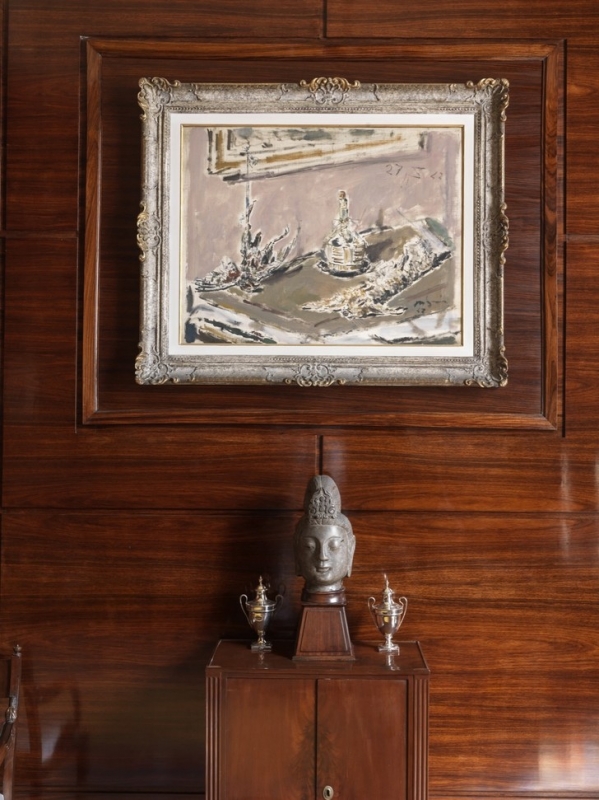 Most of the walls in the “public” part of the house are covered with rosewood panels.

But the Necchi family did not manage to live in it for a long time — with the outbreak of World War II in 1939, they decided it was best to go to their village residence, and in 1943 the Fascist generals set up headquarters in the mansion. The real revival of Villa Necchi began only in the early fifties — the changed fashion and the desire to erase memories of wartime forced Necchi to hire a classic decorator – Tomaso Buzzi. 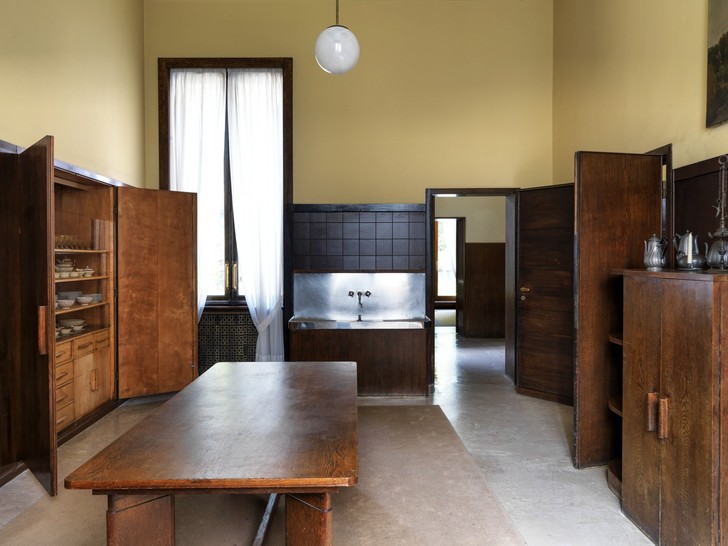 The basement floor is reserved for servants. The furniture for it was designed by Portaluppi.

He added furniture of the XIX century to the interior, sheathed a large dining room with carved wooden panels and hung tapestries on the walls. His additions, though alien to the house, did not spoil the interior. Many of the rooms remained as they were conceived by Portaluppi: for example, the corner room depicted in Guadagnino’s film is a winter garden. Here everything is as before — and the asymmetrical pattern of the travertine floor, and the coffee table on thin legs with a lapis lazuli tabletop, and the emerald upholstery of the sofa. 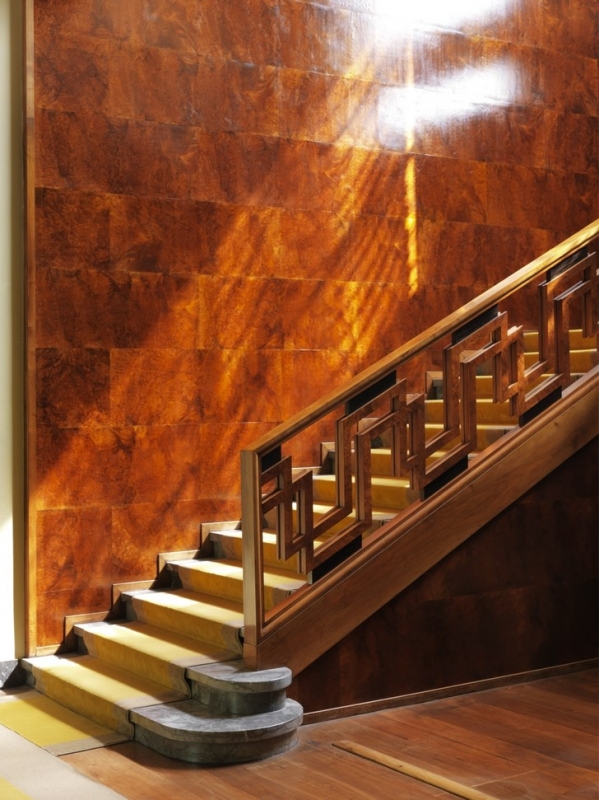 A fragment of the grand staircase. 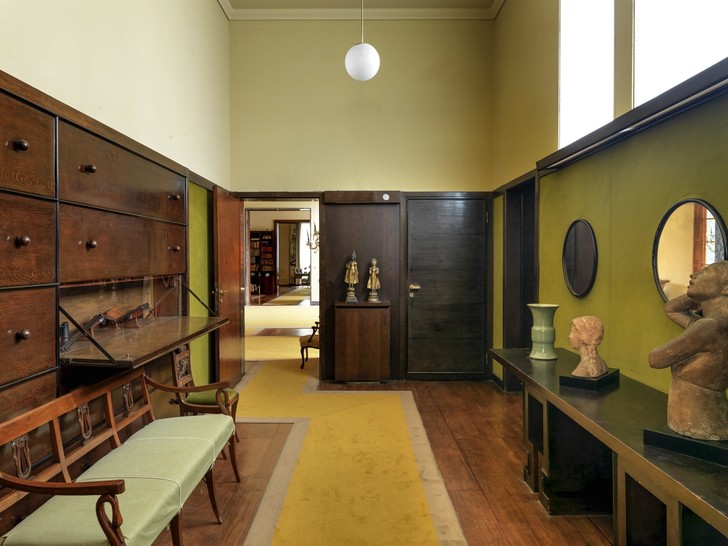 In this room in the kitchen, twice a day — at noon and at seven o’clock in the evening — the entire staff of servants gathered at the table.

Jijina Necchi died in 2001, at the age of 99, childless, having outlived her husband and sister. She has hardly left the villa for the last ten years. After the death of the hostess, the house passed to the State Fund for the Protection of Natural and Cultural Monuments, which turned the building into a public museum. So now, on any day except Monday, curious visitors can wander through the rooms that have served as decorations for the ambitions, passions and secrets of Milan’s richest family for almost a hundred years. 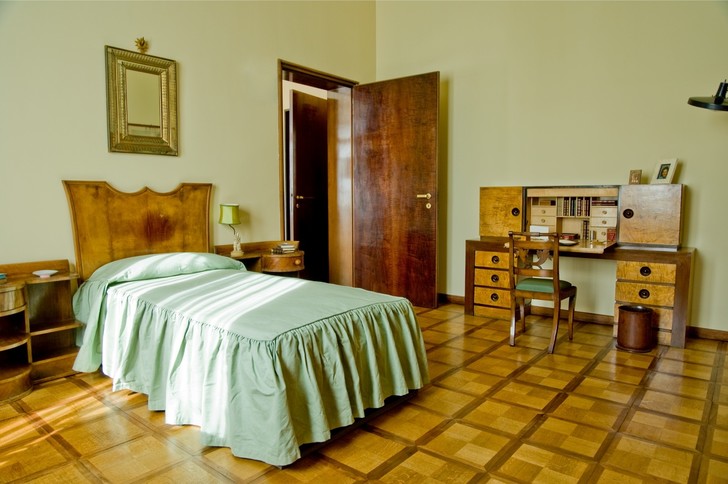 Private rooms are not decorated as solemnly as the state rooms, but the geometric pattern of the parquet and laconic forms of furniture remain unchanged.

The villa had all the amenities imaginable at that time, including a swimming pool and a garage for four cars 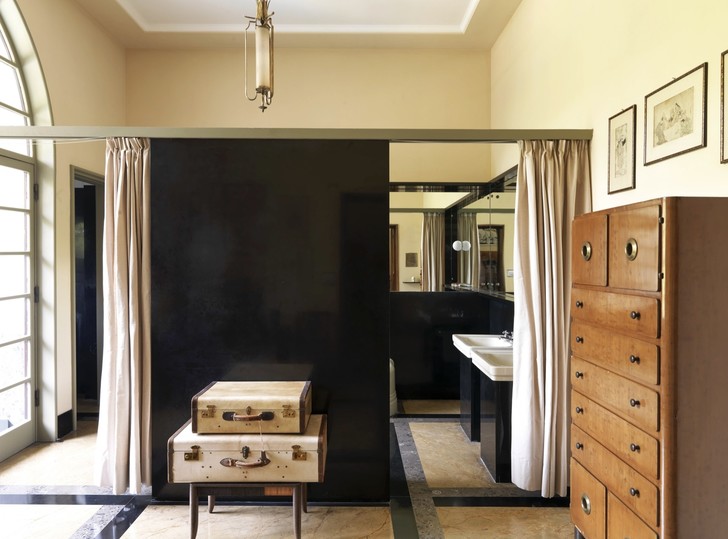 The bathrooms are separated from the bedrooms by low partitions and heavy curtains.