We consider the rooms and sleeping areas that the designers have designed in their apartments. 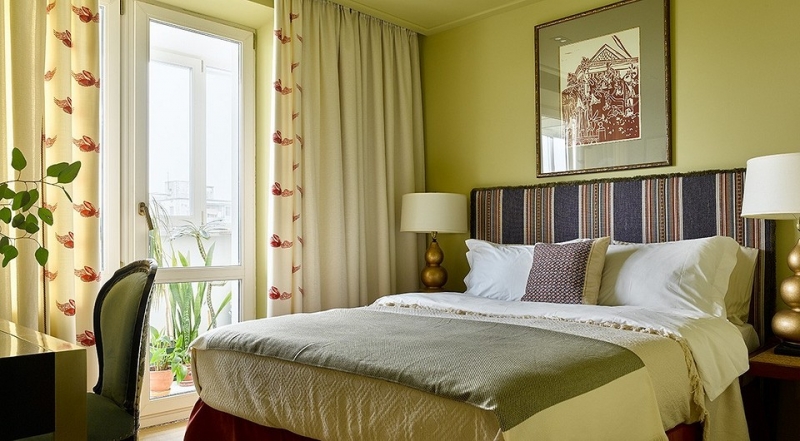 1 Warm bedroom interior with the atmosphere of the American South

Designer Natalia Mitrakova designed an apartment in a typical panel-block house for herself and her family. The bedroom looks warm, cozy and original. The walls and ceiling are painted in one tone of complex sandy yellow. Natalia herself characterizes the interior of the bedroom as “in the spirit of cozy southern bed & breakfast”. Here is a bed upholstered in dark blue with a bright stripe. Curtains made to order, with a pattern of oysters. A dressing room separated from the main room by a louvered partition (another reference to the American South). The painting above the sofa was also brought from a trip to America. And at the same time, there is a place for antiques here. An armchair at a table opposite a 19th-century sofa. Natalia found it with her partners, it was waiting in the wings until the restorer took over.

In a word, the interior is “talking”, really warm and southern. It is difficult to imagine that this room is located in an apartment of a typical Moscow house. 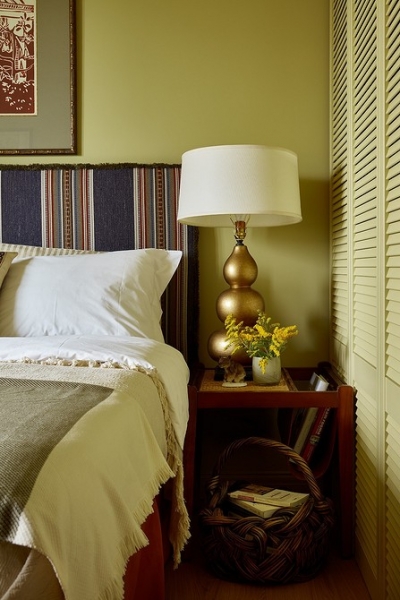 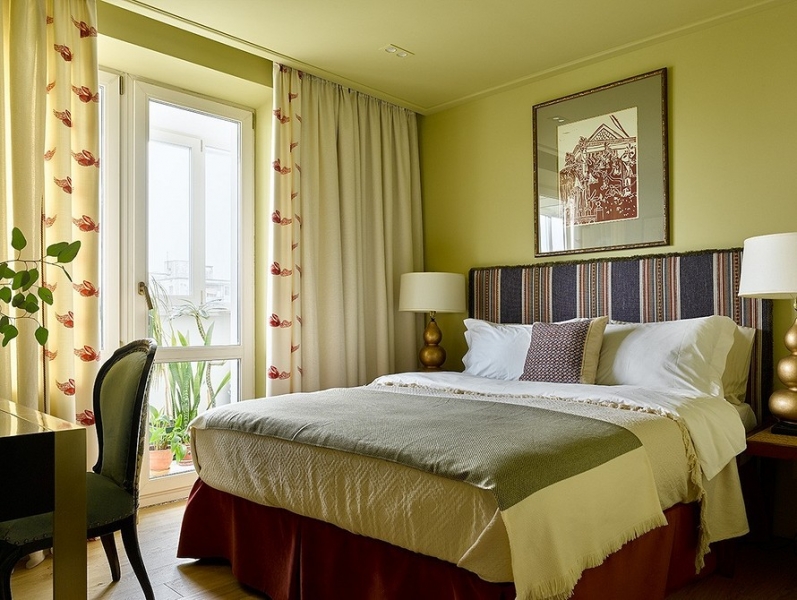 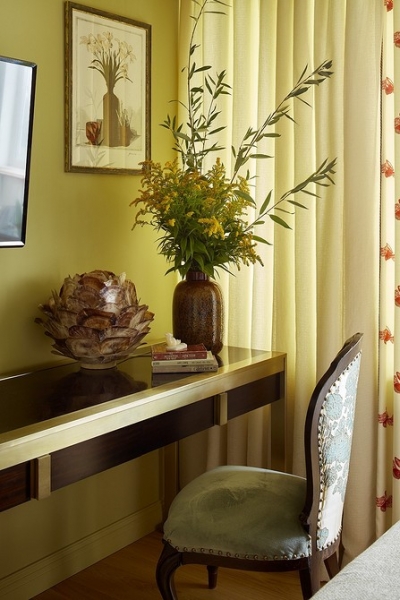 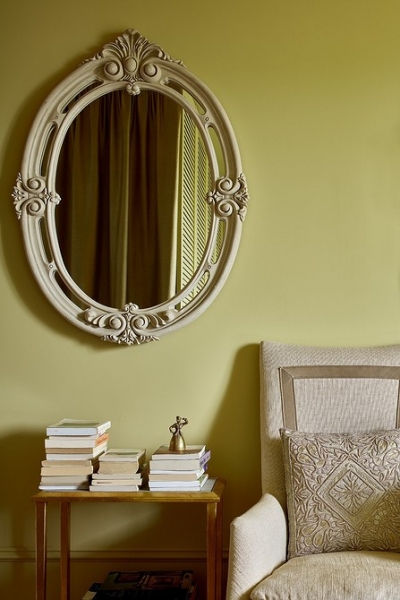 2 White bedroom under the roof

Architects Andrey and Daria Zhlobich designed this small apartment on the attic floor of a house in Minsk for their family. The original area was increased due to the organization of the mezzanine floor, which housed a bedroom and a small children’s area. The interior of this space is as laconic as in the whole apartment. White, gray colors, complete minimalism, almost no decor, unnecessary things, no bright accents. The bed is a podium with a mattress, and the bedroom decor is complemented only by a chest of drawers. In the children’s area there is a crib and a rack with toys. 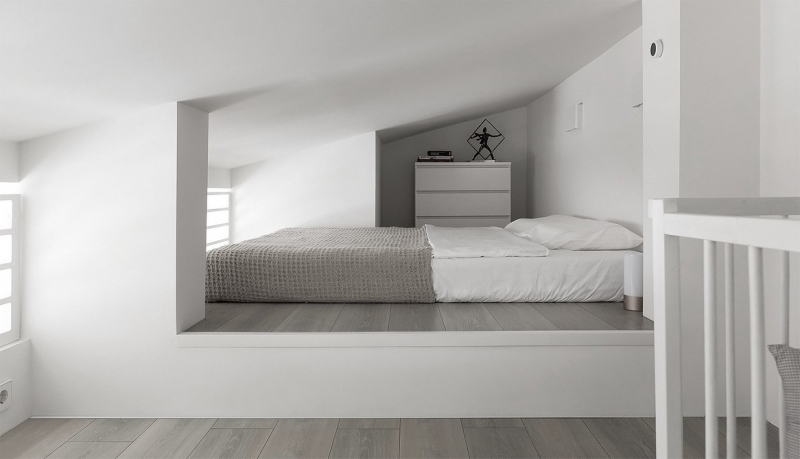 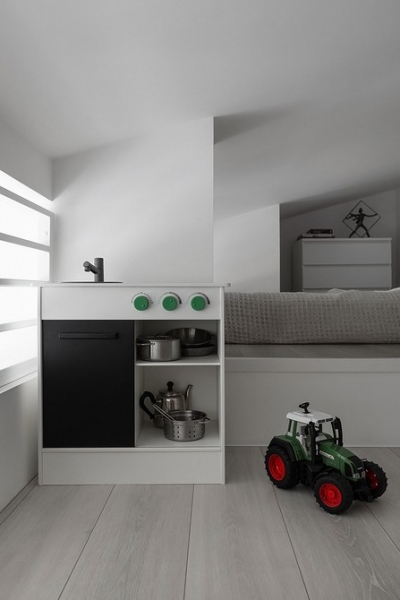 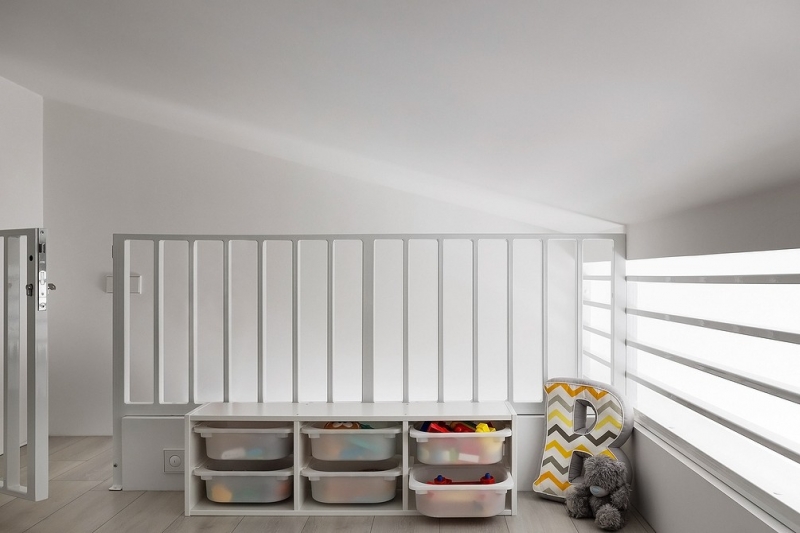 This apartment belongs to designer Evgenia Filatova and her family. To allocate a separate bedroom, redevelopment was done, part of the kitchen area was “taken away”, and the last one was made small. With such a redevelopment, the bedroom is officially called an uninhabited room.

Stylistically, it turned out to be a modern space with ethnic motifs. The latter added spot decor on the wall, the shape of bedside tables, a print on the pillow. Basically, the gamma is neutral: light walls and graphic dark furniture and lamps on its background. 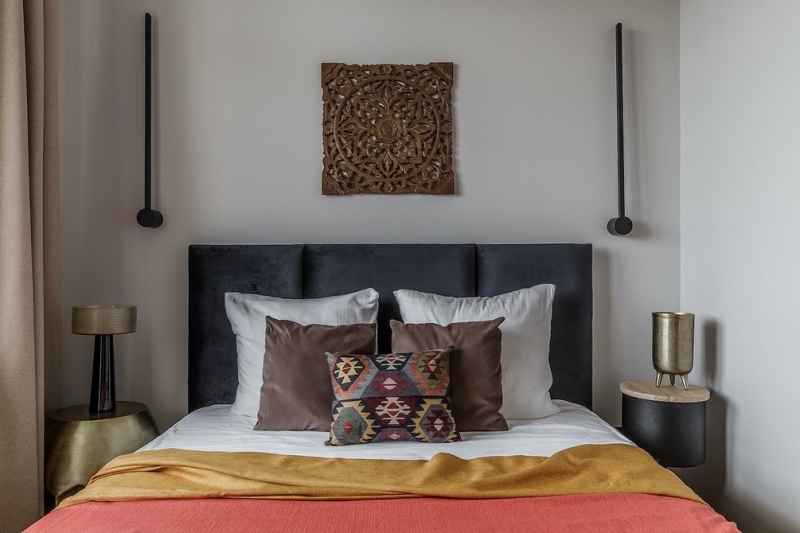 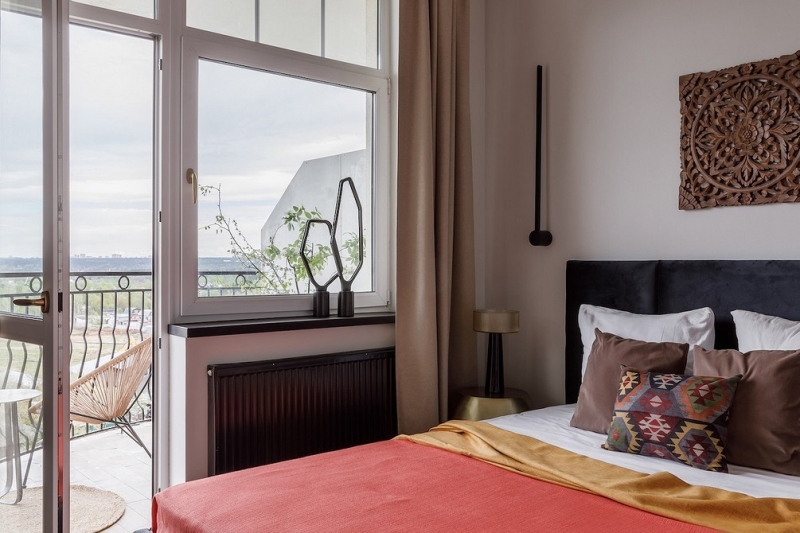 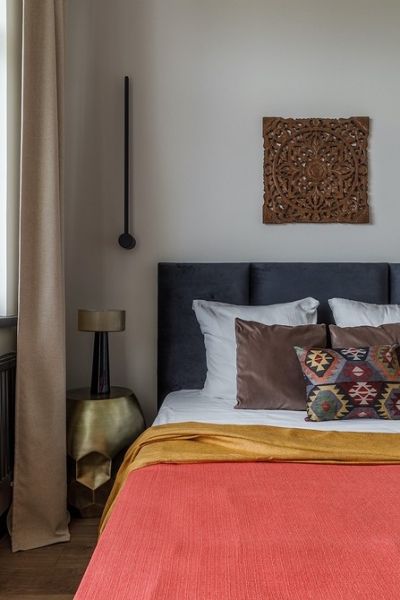 4 sleeping area in a small studio

In her studio, designer Kristina Lichik did not make partitions, the zones are separated from each other only with the help of furniture. But from the entrance, the sleeping area, which is represented by a podium and a mattress, is still not visible, which makes it more private. The podium is separated from the kitchen and living area by a low partition. This is an excellent example of zoning and how, even on a small square meter, you can organize a full-fledged sleeping place, so as not to be content with a folding sofa. 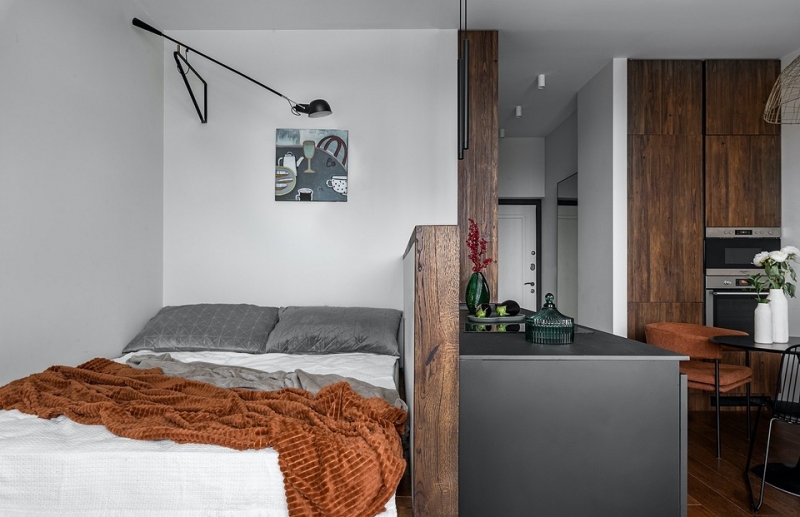 5 Mini-bedroom behind a glass partition

There were supposed to be two rooms in the apartment of designer Ulyana Sinitsyna, but Ulyana made a small redevelopment to allocate a separate bedroom, save the nursery and the kitchen-living room. Thus, the bedroom turned out to be small, it is separated from the living room by a glass partition with a curtain, but this is enough the family likes to spend their free time in the common area.

The interior used a green shade of paint on the walls, soothing and at the same time not banal. And the wall behind the headboard is decorated with accent wallpaper floral print on a blue background. Decor and textiles complete the composition. 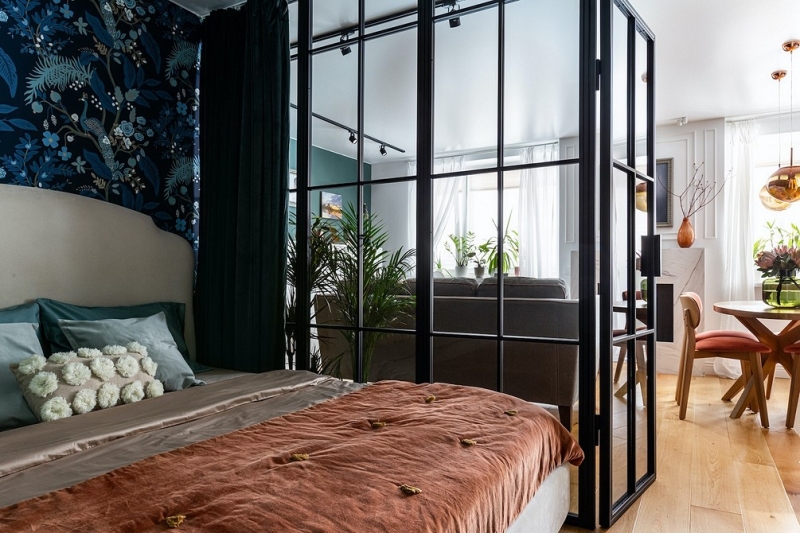 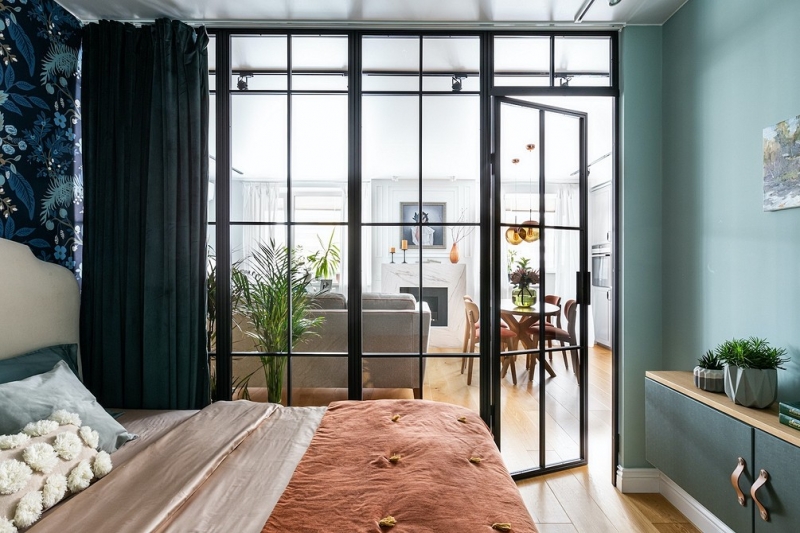 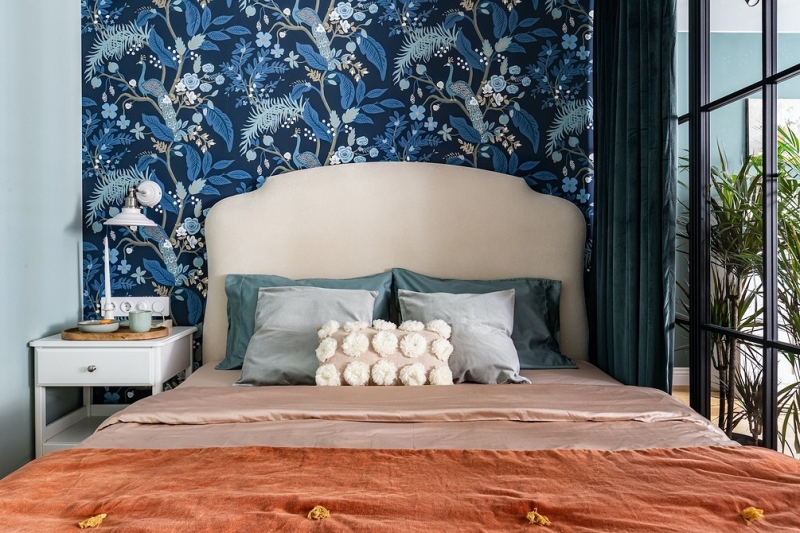 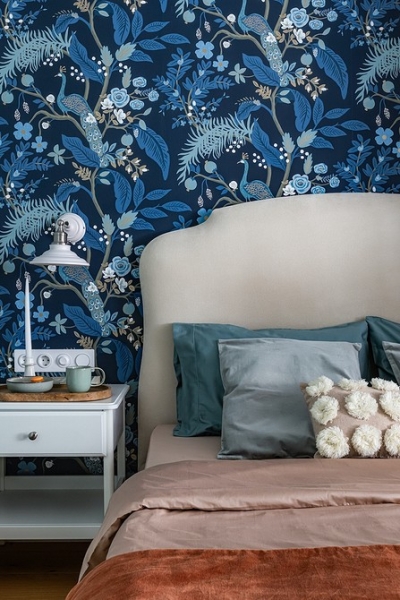 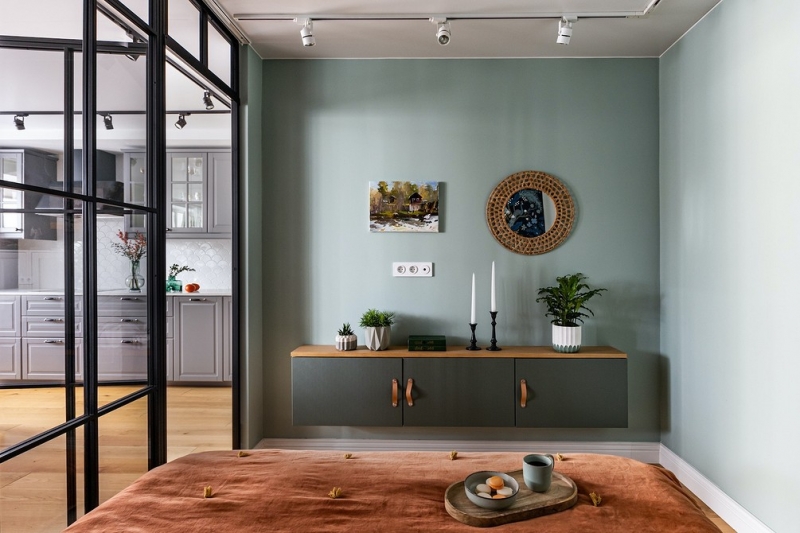 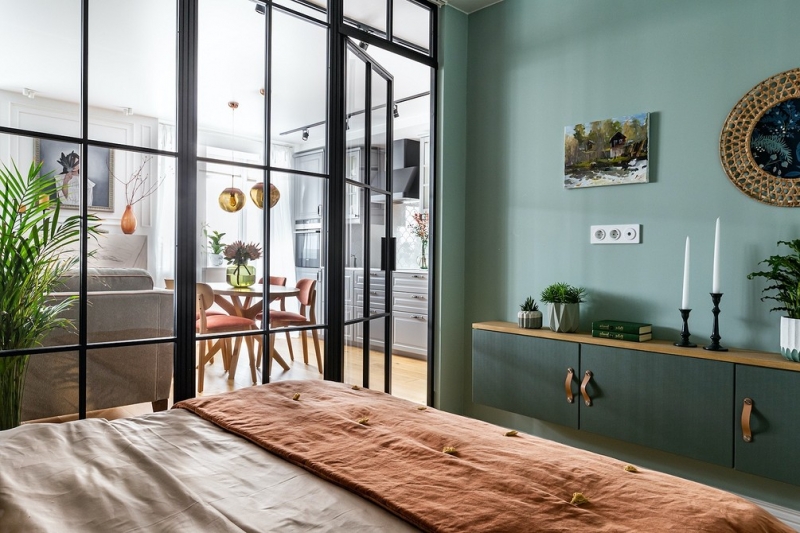