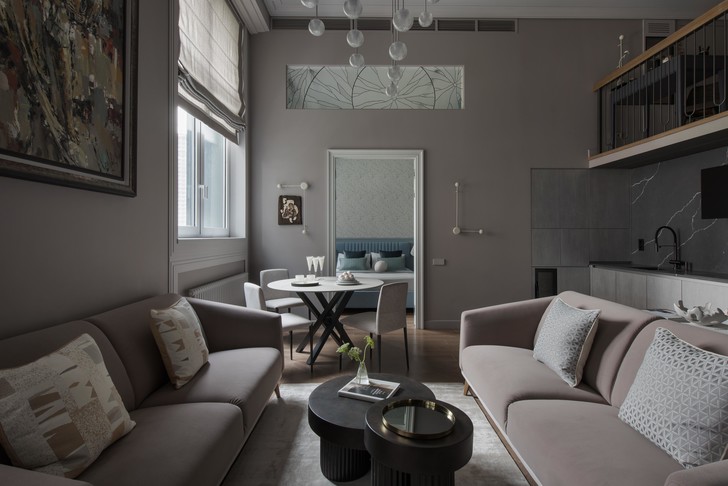 Where is located: residential complex “Heart of the capital”

The main idea of the project: restrained luxury, when the apparent simplicity hides careful work with details and a combination of materials. 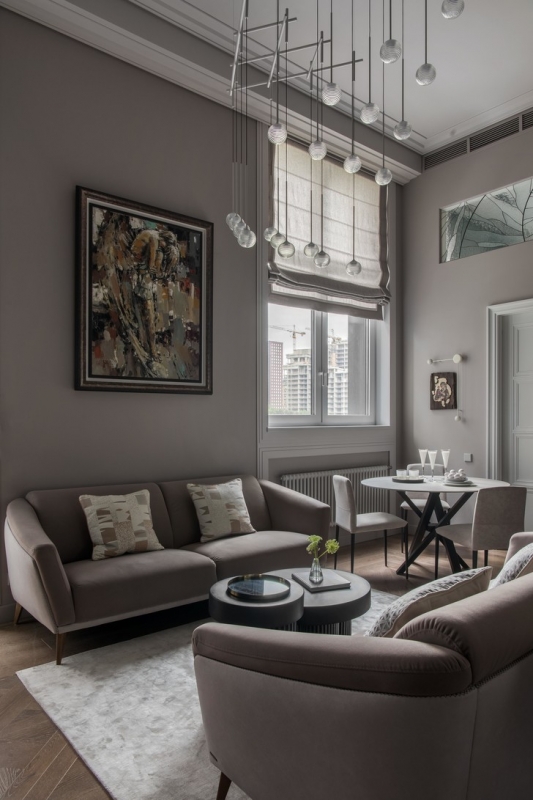 The layout was determined by the features of the apartment — I wanted to make it even brighter and airy. This is how the enfilade concept appeared. “The axial composition of the living room was the first idea and has been preserved despite numerous alterations of the layout at the design stage,” says the author of the project Irina Kovetskaya. 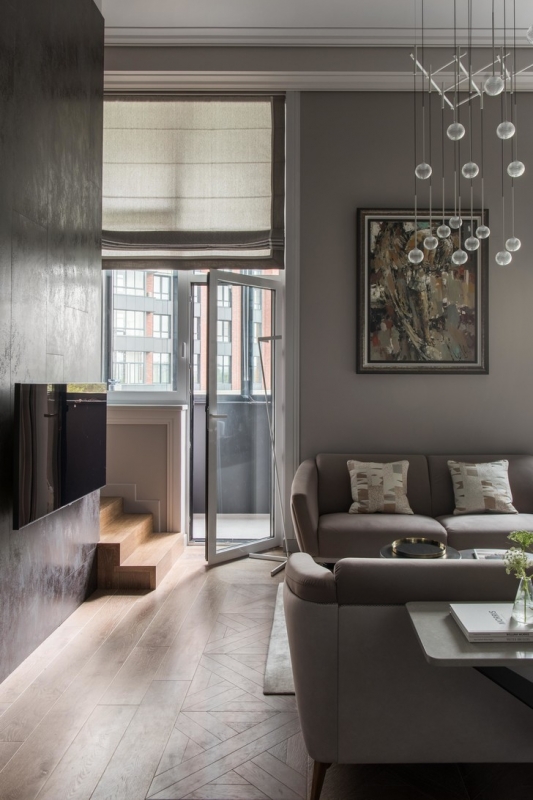 In the living room, the composition of two sofas facing each other attracts attention, which is not quite usual for our interiors. After all, the classic idea of a living room is a sofa in front of the TV. But the designer was inspired by the idea of the living room as a place for communication and dialogue, where the interlocutors sit face to face, and not in a row sideways to each other. 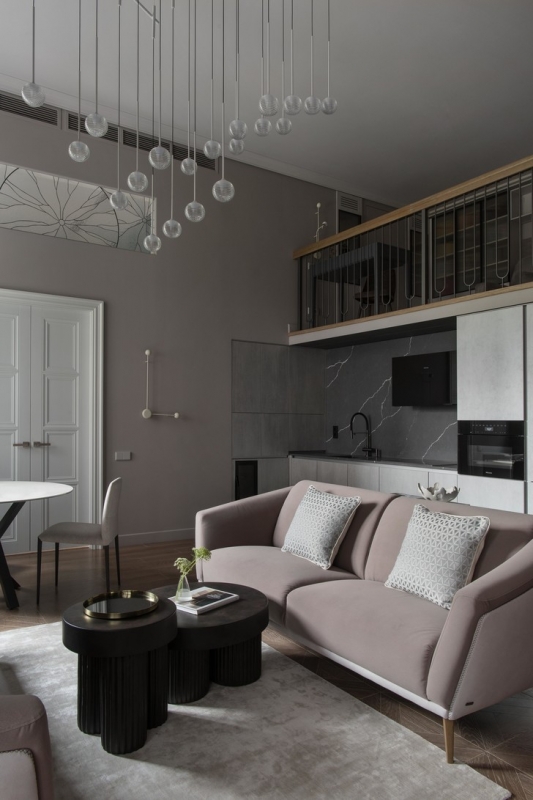 Living room. There is a spacious mezzanine above the kitchen area.

It was logical to keep a two-light space along the windows, so all the utility rooms were lined up along the wall opposite the windows. So, under the mezzanine, in addition to the hallway, there are two wardrobes (one large in the hallway, the second passageway between the bedroom and the master bathroom) and two bathrooms. There is also a built-in kitchen. 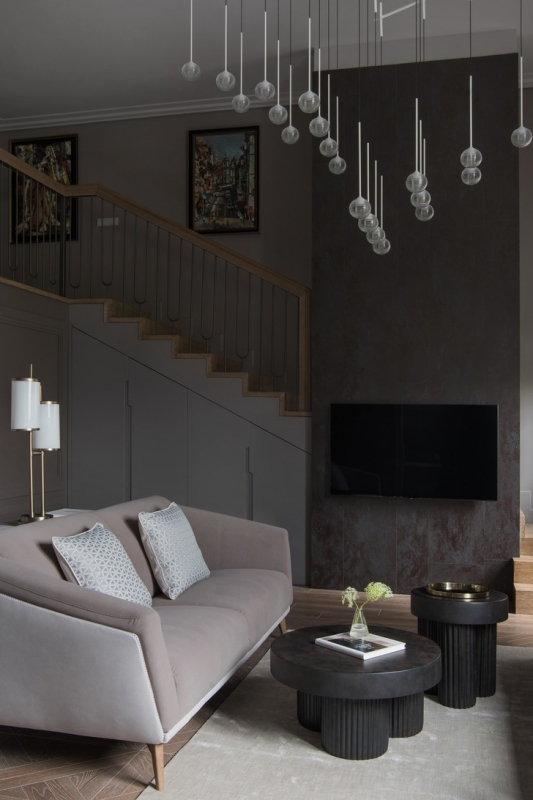 On the second level, an office-library was organized and an additional isolated room was made, which can be used as a guest room — through a large stained glass window from the bedroom, enough daylight penetrates into it. A laundry and utility area disappeared under the stairs. 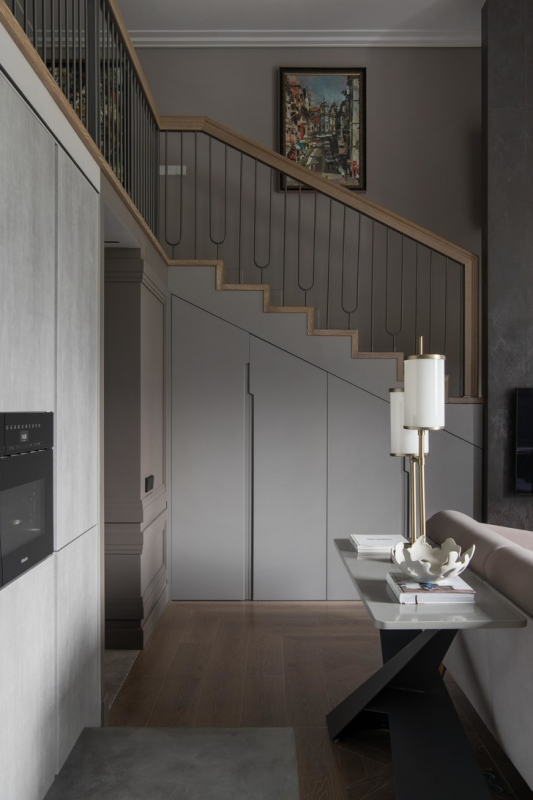 Living room. The theme of American classics is emphasized by the console separating the kitchen and the passage part of the room. Storage under the stairs, the company “Interior”. Console: base, Riflessi, table top made to order. Stairs, Finex. Railings, Metal Made.

“This is not the first property of the customer,” says Irina, “and this time everything was done “for myself”, starting with the layout and ending with the color scheme. Of course, when the customer asked for a beige color, there was a fear that a monotonous interior would turn out, but she agreed to all the suggestions of accents.” So a contrasting pylon with an unusual texture appeared in the apartment, a dark hallway and a black stone in the kitchen. 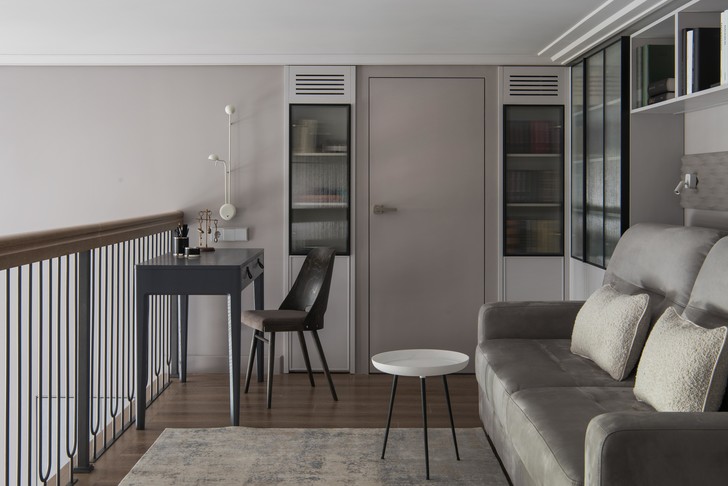 Office on the mezzanine. The library is made to order according to the designer’s sketches. Table, The Idea. White table, Moo stores. Bra, Vibia.

The furniture was selected for maximum comfort: sofas with recliners, a bed with a mattress that changes position, and even an orthopedic sleeping place was made in the library. The hostess also asked to fit a part of her painting collection into the interior — the designers decorated the paintings in a baguette that emphasizes the style of the interior. 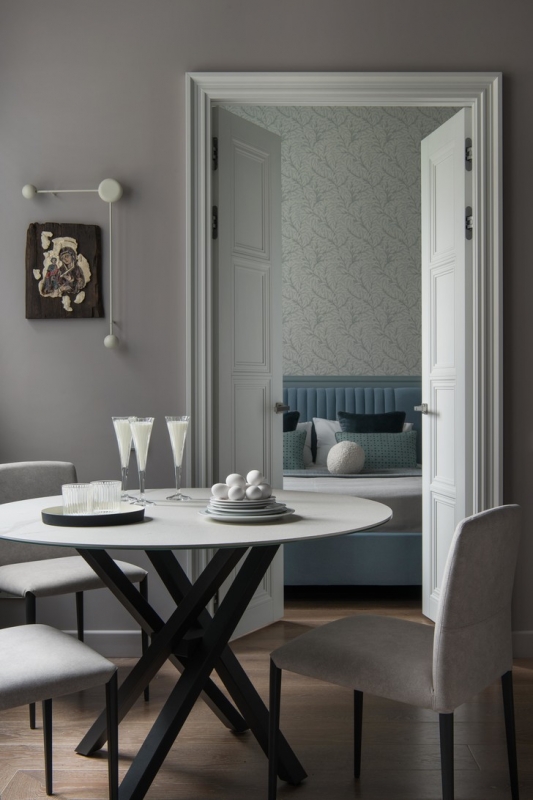 Dining group. Despite the not quite successful height of the window sills (1.2 m), it was decided to place a dining area near the window. Dining table and chairs, Riflessi. Doors, “Volkhovets”.

“From the very beginning it was clear that the strict main space would be designed in a neutral scale, but the boredom of the beige interior was avoided.” The taupe color chosen for the living room saves from monotony. This gray-beige shade has a purple undertone, which works great in the interior when lighting changes — from pinkish-brown in the sun to gray-foggy in the evening. 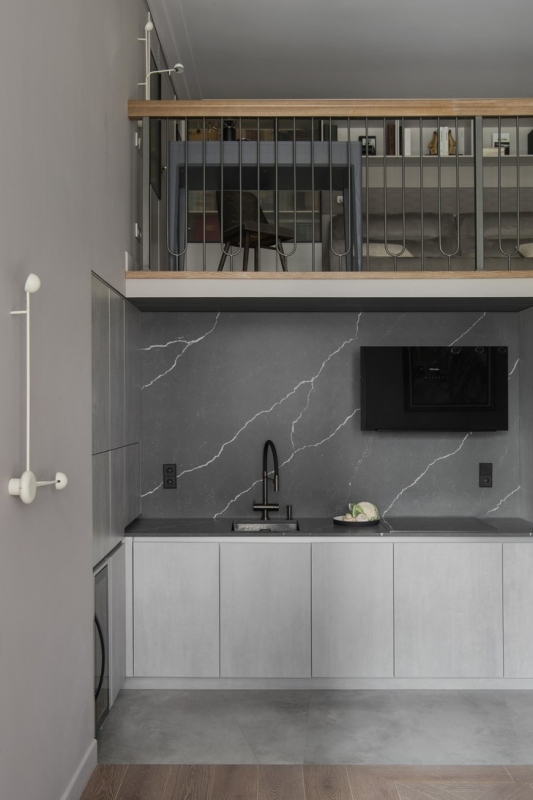 The kitchen consists of two volumes inscribed into each other — the light volume of the kitchen facades together with the highlighted granite floor and the contrasting graphite of the countertop, apron and ceiling. At the same time, the console at the sofa is both part of the kitchen and the living room and visually separates both zones. 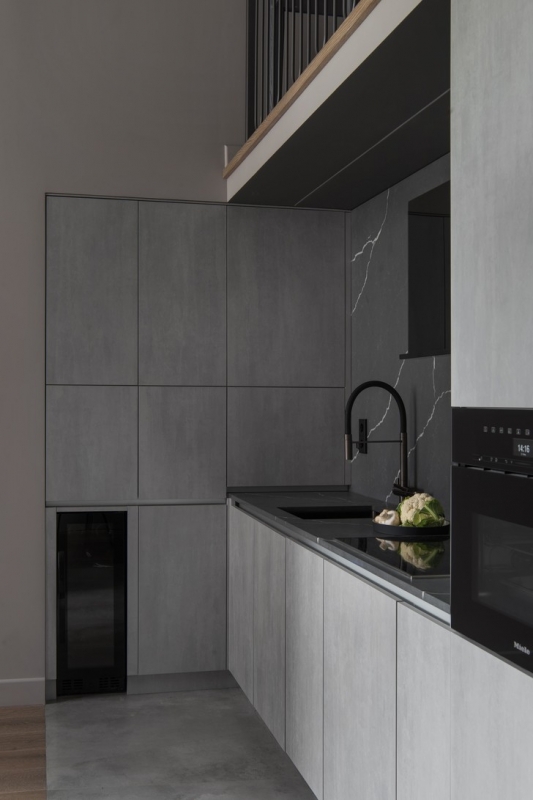 “The color of the bedroom was questionable for a long time,” Irina recalls, “at some stages it could even turn green with palm leaves, but it felt like it wasn’t 100% hit, we were waiting for an epiphany. And it came — looking through the albums of William Morris, the customer and I found a light leaf ornament based on only two colors, cream and dusty blue. I supplemented these basic colors with a deep purple, the same one that is present in the living room colors under certain lighting conditions.” 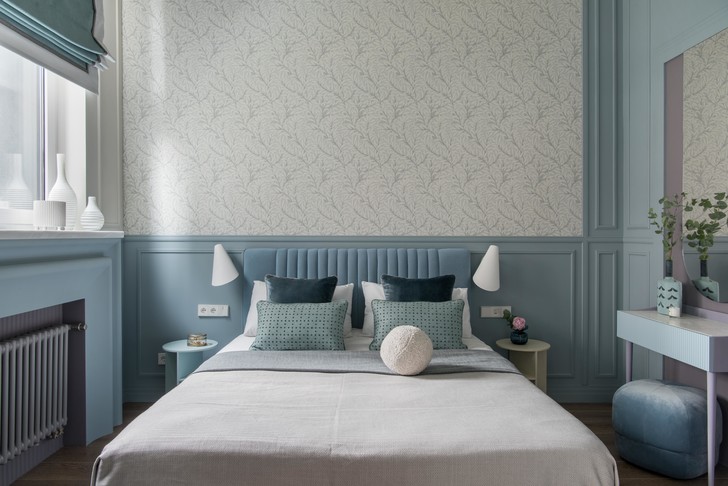 In the bedroom, the reference to classic interiors was strengthened, but a very minimalistic profile was used, combining it with a massive cornice. High walls are not only an advantage, but also a challenge — how to organize this plane without breaking a scale commensurate with a person? This task is solved by stained glass windows, lightening the mass of the wall and spreading light. Given the small area of the bedroom with high ceilings, with the help of stained glass windows, it was possible to avoid the effect of a well. 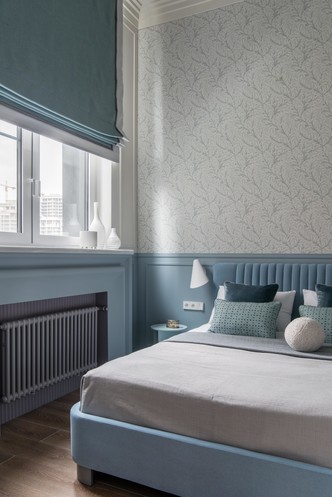 Bedroom, fragment. The bed is made to order according to the designer’s sketches. 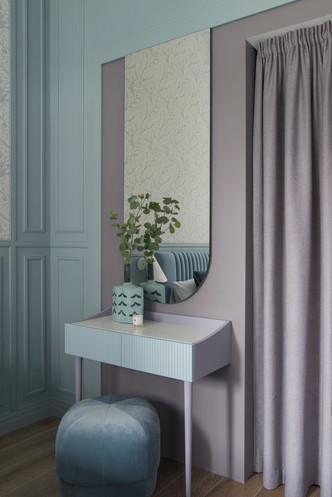 Bedroom, fragment. The table is made to order according to the designer’s sketches. Poof, Normann Sorephadep.

The problem of a high window sill in the bedroom was solved according to the principle “you can’t hide — emphasize”. So a massive portal of large folds appeared under the window sill, which is connected with both the shape of the headboard and the folds of textiles in the doorway of the dressing room opposite. The height of the window sill set the scale of the color division of volumes — everything below this level is designed in a single blue color. 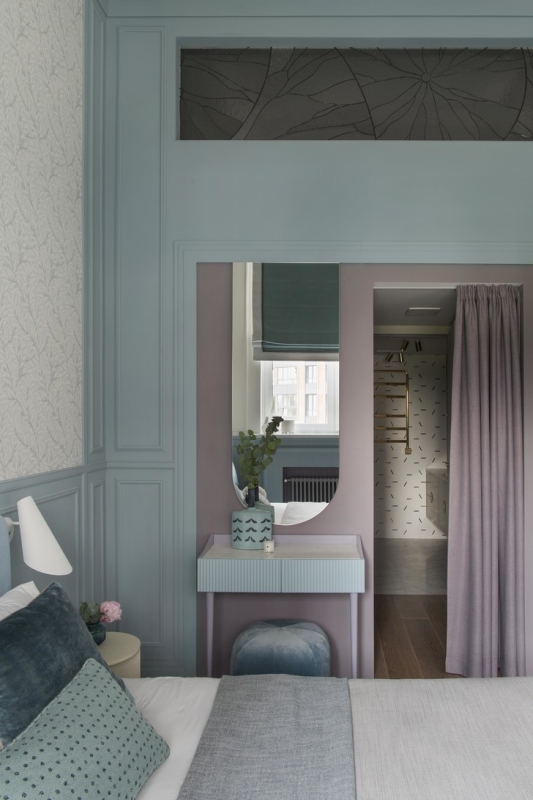 Bedroom, fragment. Behind the curtain is a bathroom.

This “color block” technique helped to highlight the second bedroom area – with a dressing table and a passage to the following rooms, a private dressing room and a bathroom, and here the color even went beyond the walls and captured the ceiling. There are a lot of subtle rhymes in the bedroom: the round shape is in the portal of the window sill, sconces, bedside tables, and then in the pouf and the rounding of the mirror. The facades of the table drawers echo the screen behind the radiators. 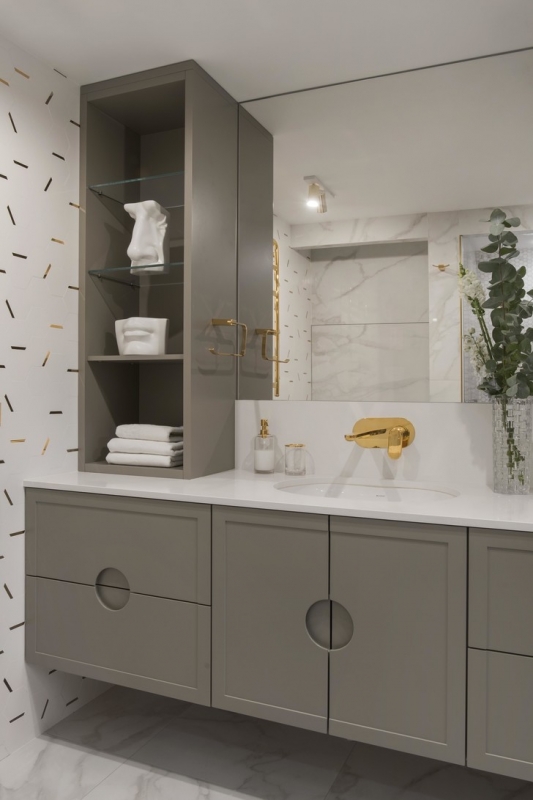 Bathroom attached to the bedroom. The furniture is made according to the designer’s sketches. Decor, Moo Stores. Porcelain stoneware, Villeroy & Boch.

The hostess’s bathroom has literally become a secret treasure box. “Throughout the interior, we tried to avoid the pronounced presence of metal,” explains the author of the project, “we have little brass, chrome, but in the bathroom we could not resist a feminine prank — gold sparkles here away from prying eyes. Even on the walls and ceiling!” 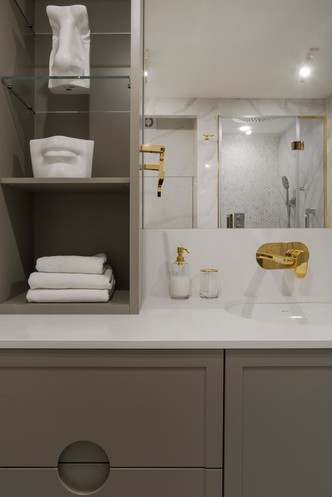 Bathroom attached to the bedroom, fragment. 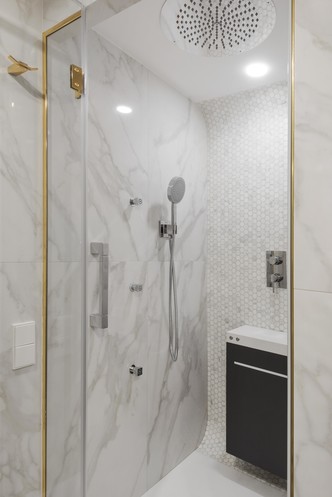 One of the first and important wishes was to organize a shower cabin with a steam function, so a shower with a special steam installation is not only hermetically sealed, but also has a rounded mosaic wall — a reference to the architecture of hamams. 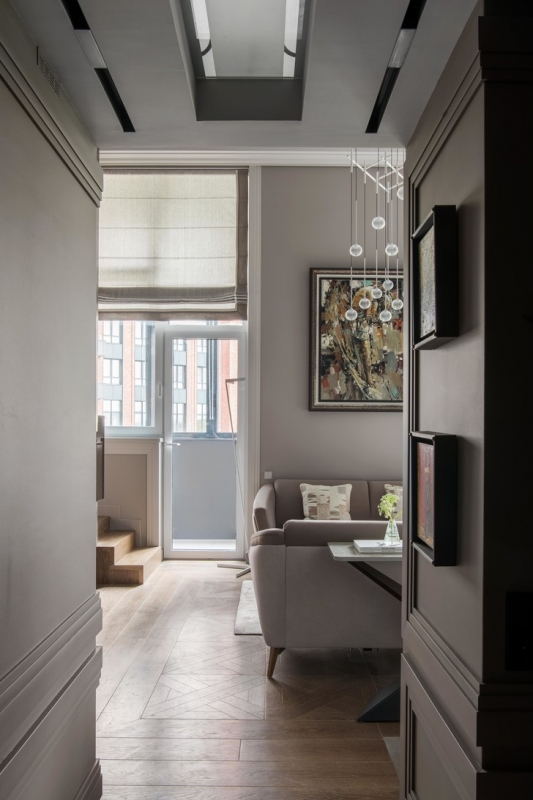 View from the hallway to the living room. The paintings on the wall are the property of the customer. Baguette, “Frame in the interior”.

One of the strongest techniques used in this apartment is the contrast of a dark hallway with a low ceiling with a bright, expanding living room space in all directions. “This transitional step is really impressive,” confirms Irina Kovetskaya, “the architects of ancient Greek and Egyptian temples did the same, where the first halls were low, narrow and dark, and each next one was higher and lighter.” 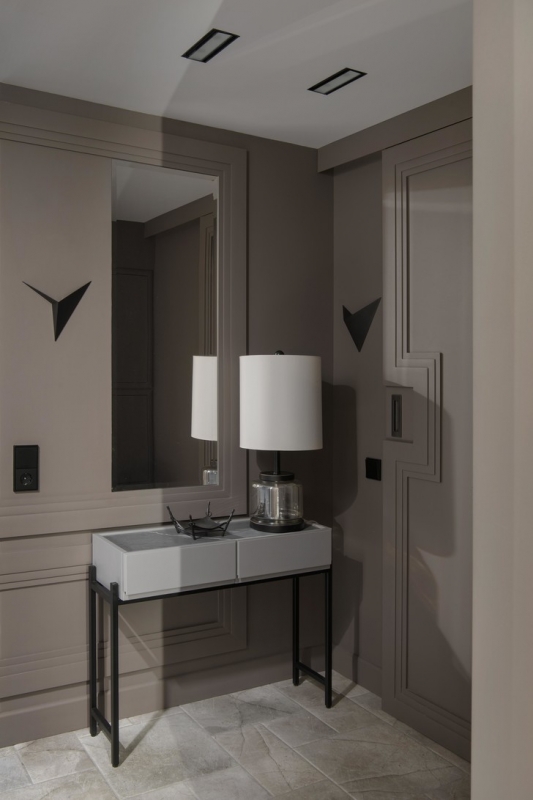