Patrick and Laurence Chavannes decided to give a second life to the irrevocably departed element of the decor — panoramic wallpaper. We found out what happened after visiting their own apartment 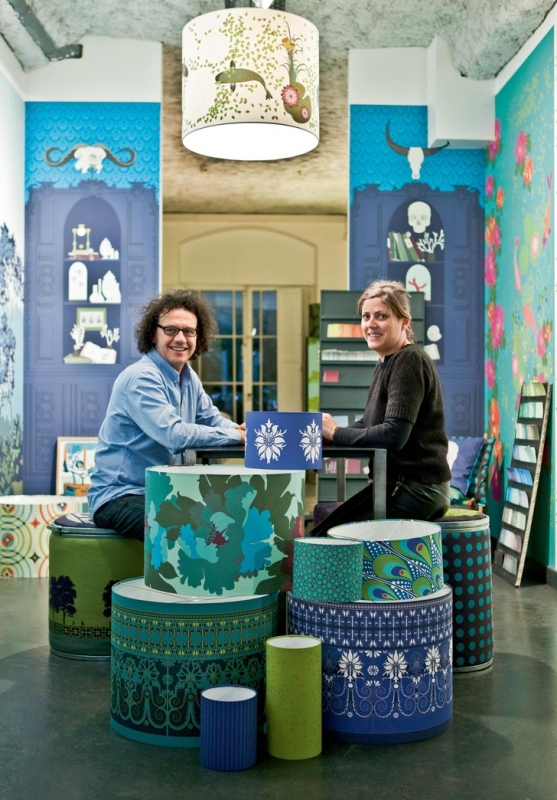 Patrick and Laurence in their studio. In the foreground is a collection of Conceptuwall lampshades.

Patrick and Laurence Chavannes are incorrigible romantics and quixotes of design. Their dream is to reintroduce panoramic wallpaper, a decorative element that survived its finest hour two centuries ago. In the XIX century, these wallpapers (papiers peints panoramiques) were at the peak of popularity in France. 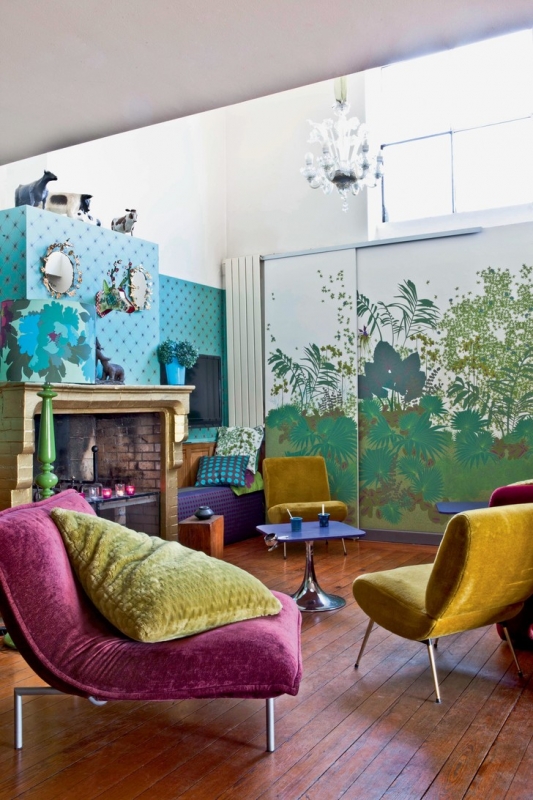 The living room in the apartment of Patrick and Laurence Chavannes. The walls here and throughout the apartment are covered with wallpaper of the Conceptuwall brand founded by them. On the wall under the window wallpaper from the Jardin des Plantes collection, above the fireplace — from the Josephine collection. The fireplace, left over from the former owner-the artist, the couple covered with gold paint.

Idyllic landscapes, scenes from the life of operatic Chinese, pictures of battles and bacchanalia decorated the walls of aristocratic castles and bourgeois mansions. Nowadays, panoramic wallpapers are still produced by some companies, for example, the French Zuber and the English De Gournay. However, their products find a place either in historical buildings or in the homes of zealous fans of classics.

“We need to take a risk, even if we are wrong. Surprise attack is the key to victory”

The Empire era has gone without a return, and battles and bacchanalia somehow do not fit into the modern interior. Laurence and Patrick were the first to realize the obvious fact: the problem is not in the material itself, but in the conservative approach to it. And we decided to start producing panoramic wallpapers with bright modern drawings. 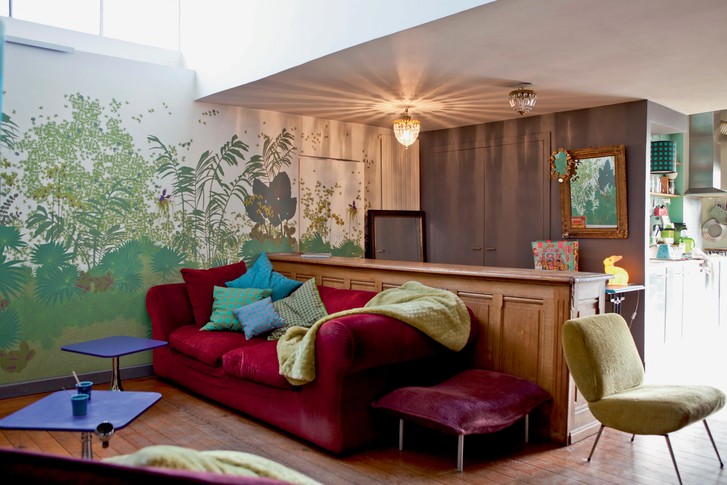 The living room in the apartment of the Chavannes is combined with the kitchen. A long chest of drawers “concurrently” plays the role of a bar counter. A “secret” door, covered with the same wallpaper as the wall, and visually merging with it, is a technique borrowed from the palace interiors of the XVII–XVIII centuries.

Admittedly, they did not act completely at random. Laurence is an interior designer by profession, Patrick has worked for wallpaper companies for many years. Experience told the Shawannas that the market would accept the novelty with a bang. 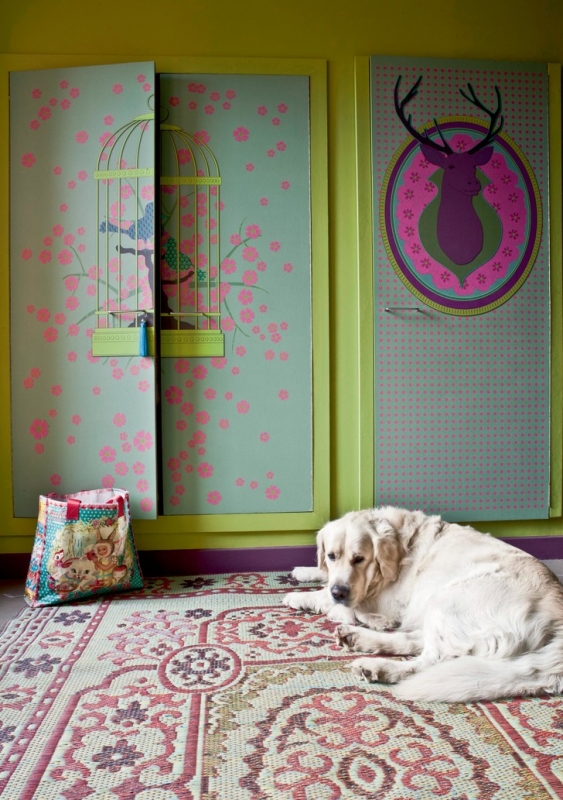 Hall. The doors of the built-in cabinets are covered with wallpaper from the Cabinet de Curiosites collection. Their pattern echoes the pattern of the carpet.

“I like to play with deceptions and balance on the edge of kitsch. Stability is boring” 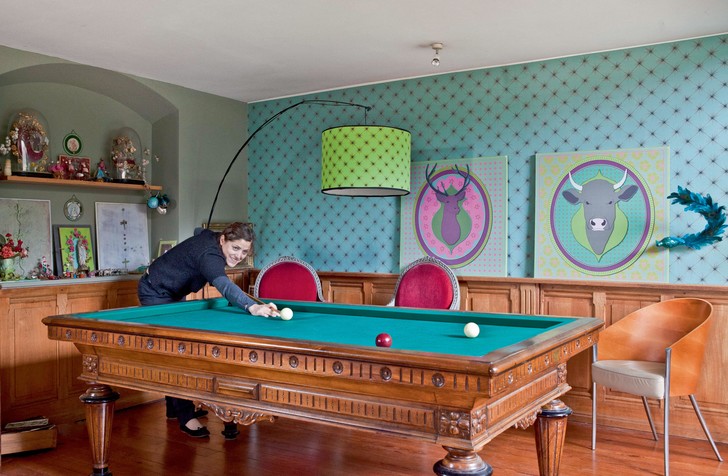 The couple were not mistaken: the first collection of the Conceptuwall brand created by them in 2007 became a hit. The patterns are drawn on a computer and printed on a non-woven cellulose base. Laurence and Patrick, like their predecessors — masters of ancient manufactories, are always happy to change the drawing or adjust the format of the “canvases” to the size the client needs. 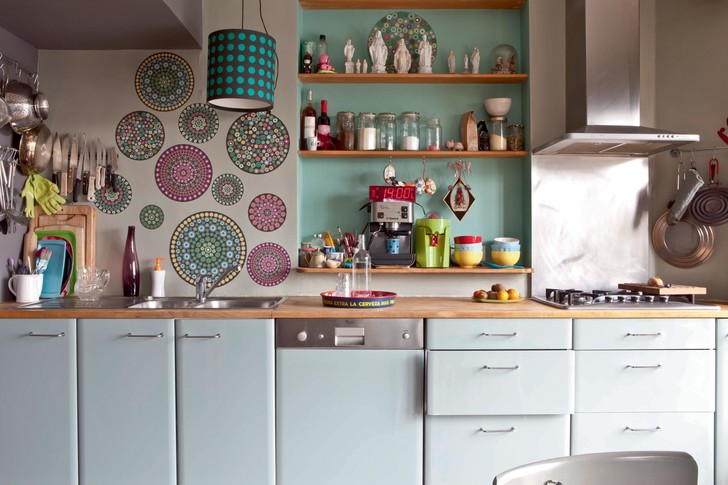 A fragment of the kitchen. The niche is painted in celadon color, above the sink there are gum-it wall stickers from Conceptuwall. Kitchen cabinets, IKEA

The only thing they are not willing to sacrifice is bright, “acidic” colors. “I like to balance on the edge of kitsch, play with deceptions,” explains Laurence. Inspired by the success, the Chavannes launched an additional line of lampshades, decorative panels and removable wall stickers. All this found a place in their new apartment. However, in order for it to become similar to human housing, the spouses had to spend a lot of time and effort. 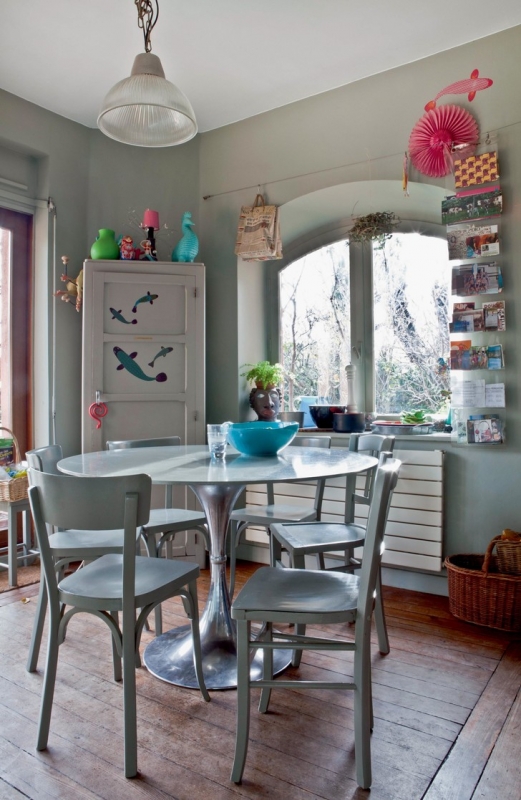 For the kitchen, the Shawannas chose a calmer range than for the rest of the rooms. The walls are painted gray, in the center of the kitchen is a Tulip table, designed by Ero Saarinen, Knoll. On the cabinet there are gum—it stickers from Conceptuwall with the image of playing carp.

The Shawannas acquired the artist’s former studio, closed for half a century. The space with high ceilings was divided into two floors. On the first floor there is a living room, a kitchen, a billiard room and a master bedroom, on the second — the rooms of the three daughters of Patrick and Laurence. They chose their own color scheme for each room: only the kitchen remained neutral gray. The Shawannas actively used the feature wall technique: they left one of the walls in each room free of furniture in order to stick some of their “panoramas” on it. 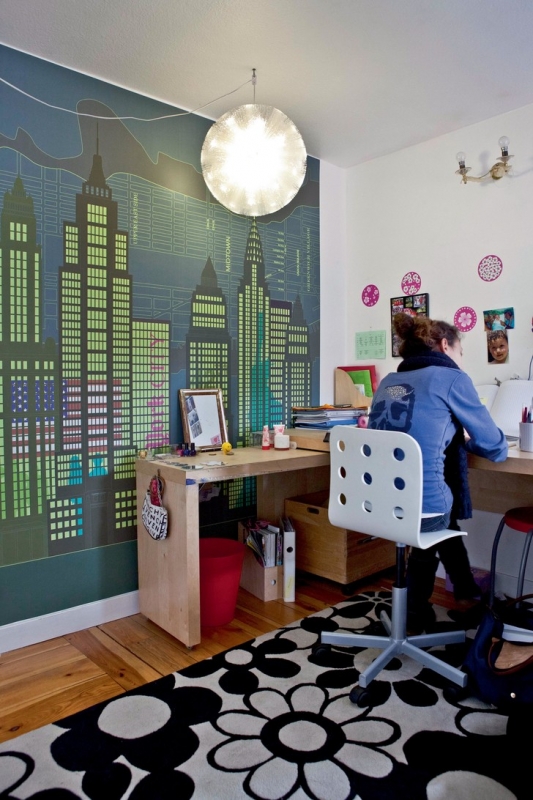 The bedroom of the eldest daughter. The interior of this room often changes — as well as the tastes of the maturing hostess. On the wall — wallpaper from the New York City (Night) series. Gum-it wall stickers and a carpet with a pop art pattern look fun, but not infantile – what you need for a teenager’s room.

The wallpaper pattern defines the atmosphere of the entire interior: in the living room it is a garden of eden, in the bedrooms it is night New York or a mysterious jungle. The rest of the walls are usually plain, they are enlivened only by stickers that can be moved from place to place. The interior is constantly being updated: Laurence loves experiments and often replaces wallpapers from past collections with new ones. “Stability is boring,” she says. — And there is no limit to perfection!”. 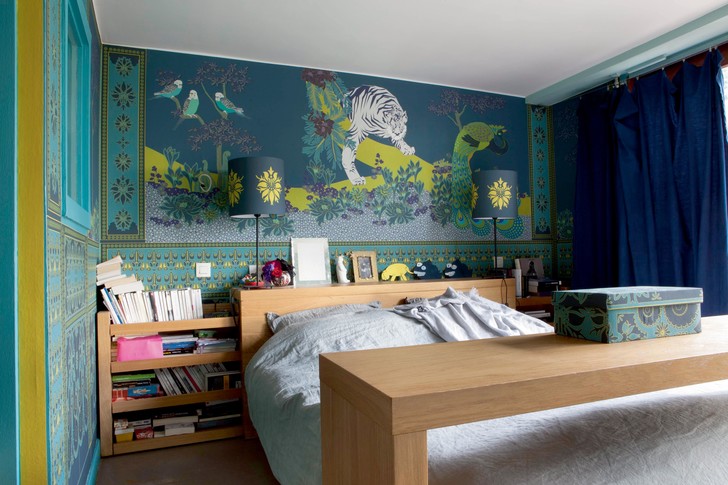 In their own bedroom, the Shawannas created an atmosphere of oriental exoticism. The walls above the bed are covered with wallpaper with Indian motifs from the Pondichery collection, heavy curtains are matched to them. The bed with built-in storage systems is made to order.