In small studios and spacious two-bedroom apartments, designers together with the owners sometimes choose alternative solutions for the dining group. We show by examples! 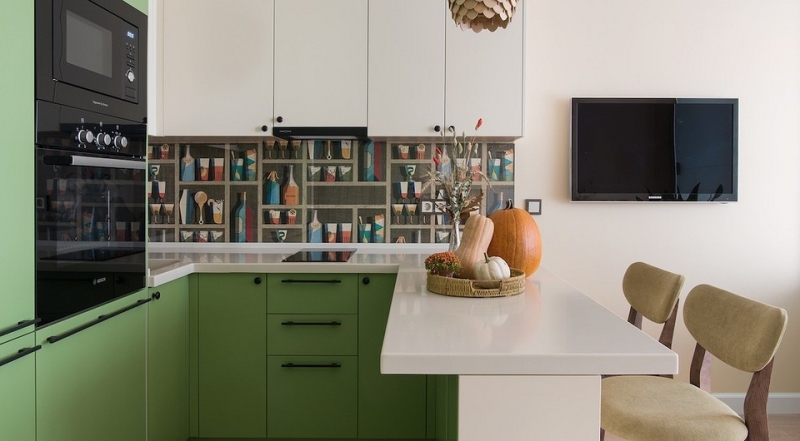 A dining table is an optional component of the kitchen. Sometimes designers in projects make bar counters or island structures. Moreover, for different customers: not only young people living alone, but also families are asking for such a replacement.

1 Bright kitchen in a family apartment

In this project of Svetlana Kapustina, the kitchen is part of the living room, and one of the elements that separates the two zones is the bar counter. By the way, this decision to replace the table with a rack was one of the mandatory wishes of customers at the start of work with the project. And, of course, it was fulfilled. 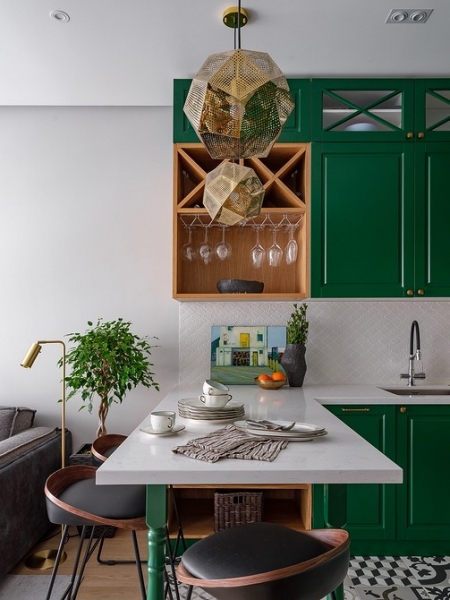 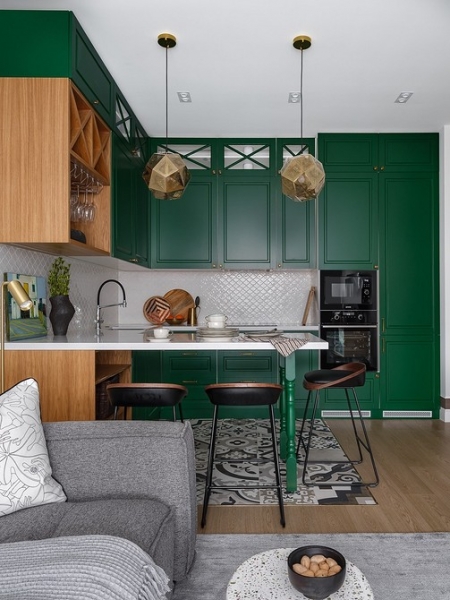 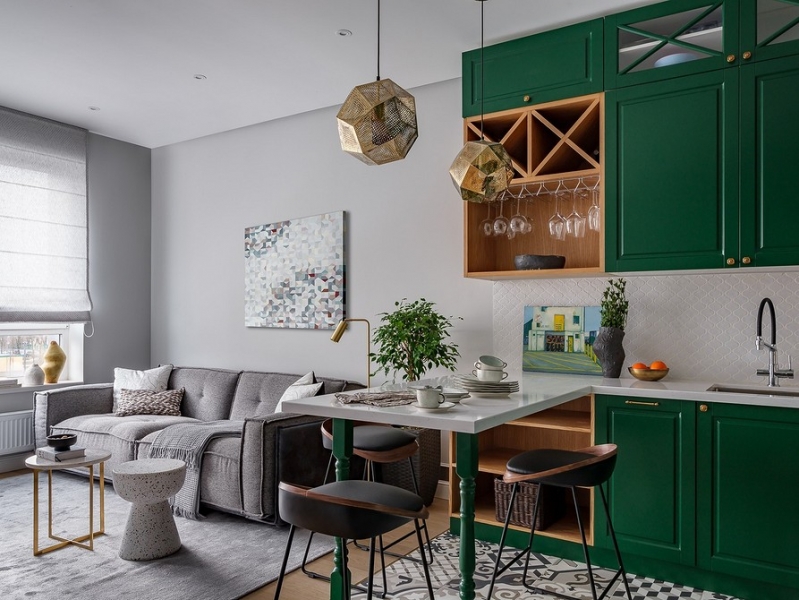 2 Kitchen in a small studio

Designer Denis Tarasenko created this project for a young couple. In a small studio with a total area of 24 meters, they decided to place a bedroom and kitchen area. And to save space, the table was replaced with a bar counter. However, this corresponded to the wishes and lifestyle of the owners, who aspired to a compact kitchen. 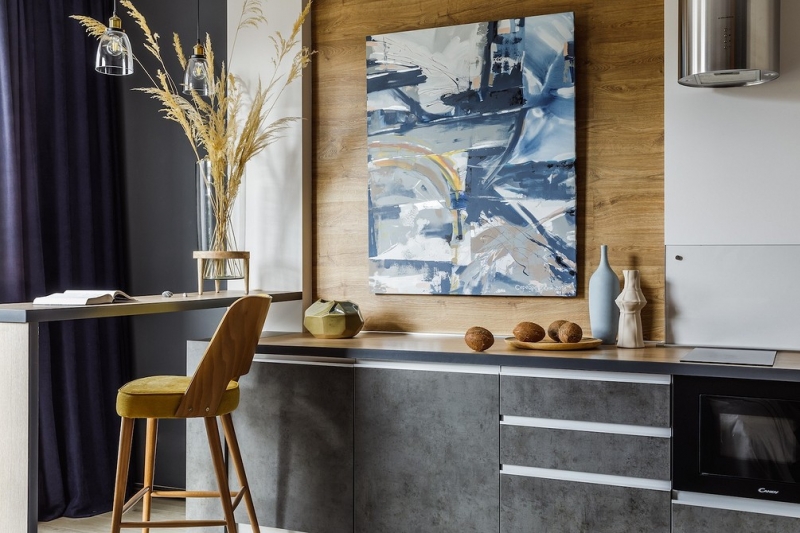 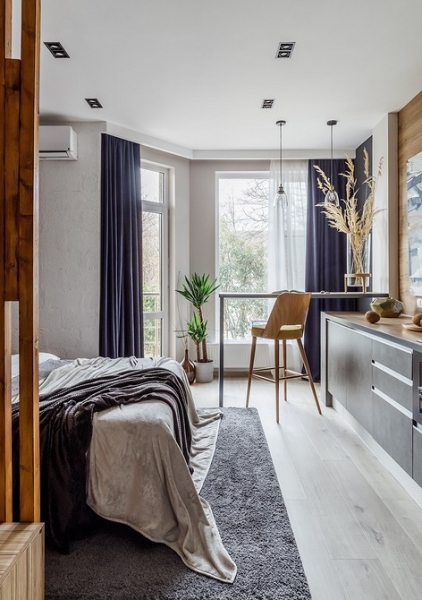 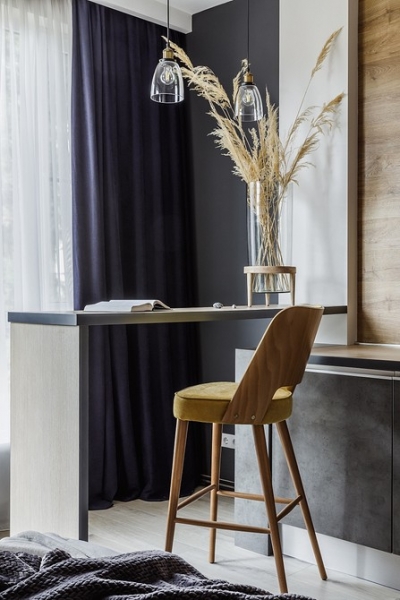 3 Kitchen in a small room

This apartment designed by Anton and Denis Yurov was created for a young man. A bedroom and a kitchen were allocated on a small area, which was combined with a recreation area and a workplace. The dining table was abandoned and replaced by a bar counter, which also separates the kitchen from the work table. It turned out to be compact and functional. 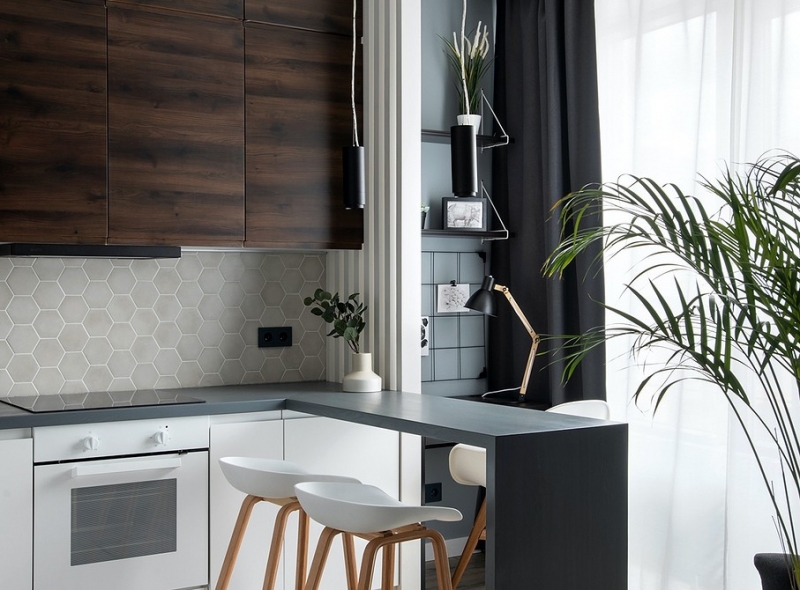 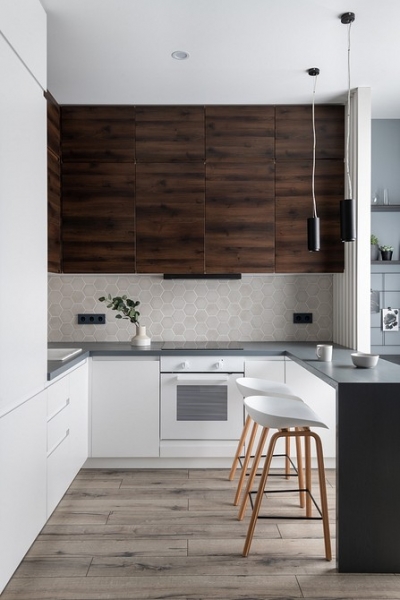 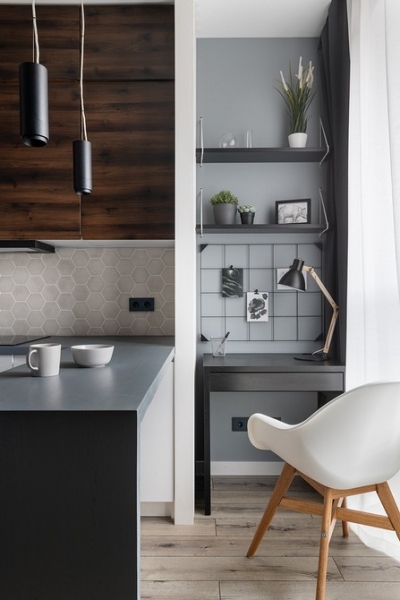 The apartment designed by Anna Dobrokovskaya has a separate bedroom, and the kitchen is combined with the living room. In this area, the dining table was abandoned, it is replaced by a bar counter connected to a kitchen set. And traditionally, it also zones the kitchen from the living room. 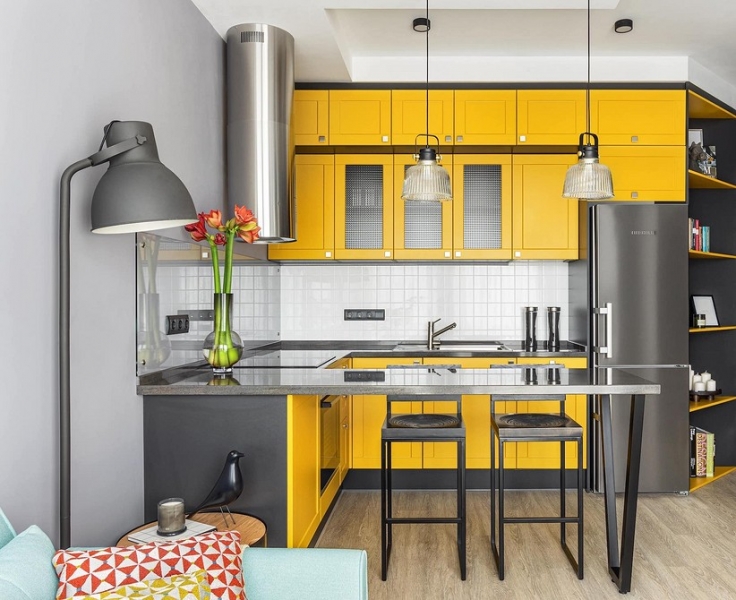 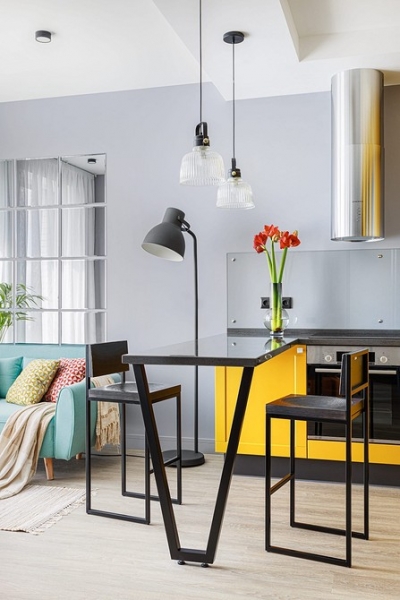 In the apartment designed by Maria Shusharova and Tatiana Kuchina for a young foreigner, the kitchen is divided into three sections: built-in columns with appliances, a row of cabinets with a sink and an island with a stove. The table top on the island protrudes from two sides, and these places are just designed for sitting behind bar stools. 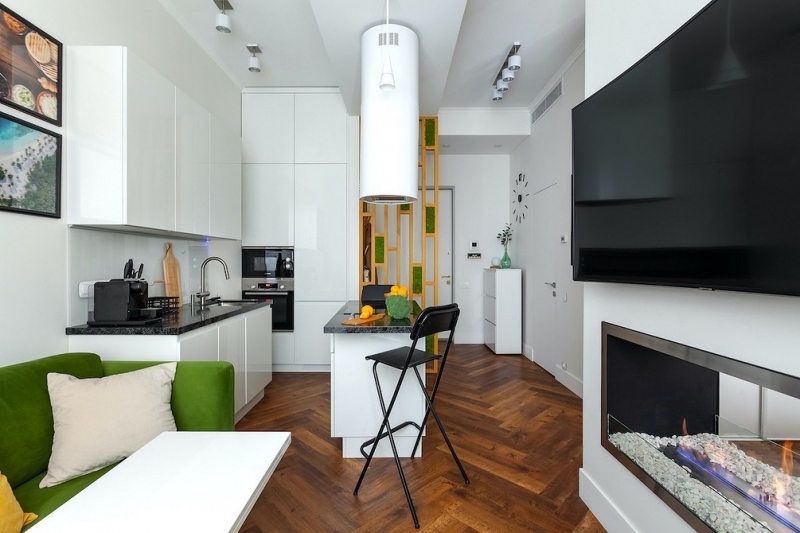 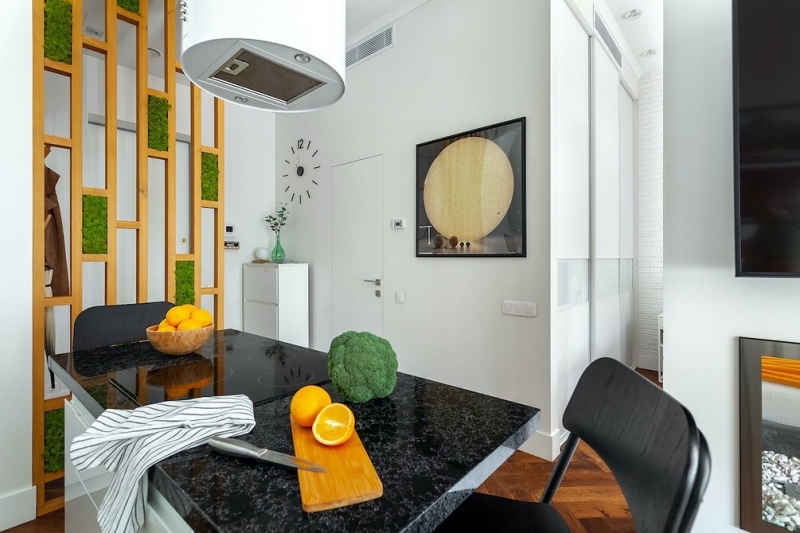 6 Kitchen in an apartment for a family

Designer Yulia Karpukhina made this apartment for a family with a child. One of the wishes regarding the kitchen was a semi-wooden table instead of a dining table. The resulting table is combined with a kitchen set. 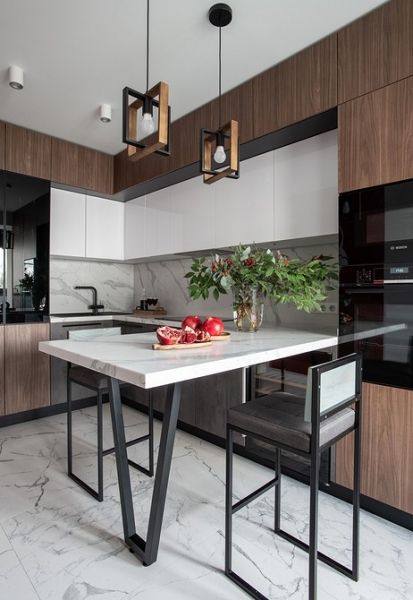 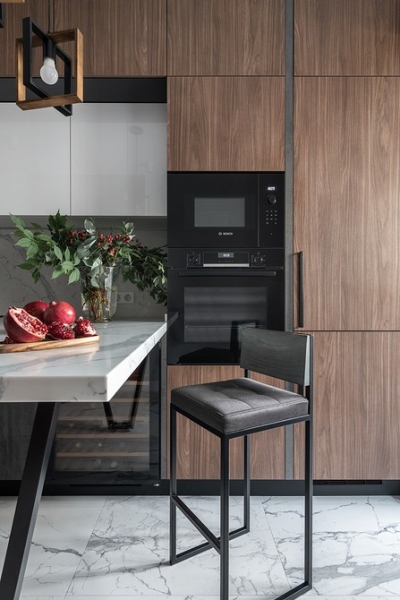 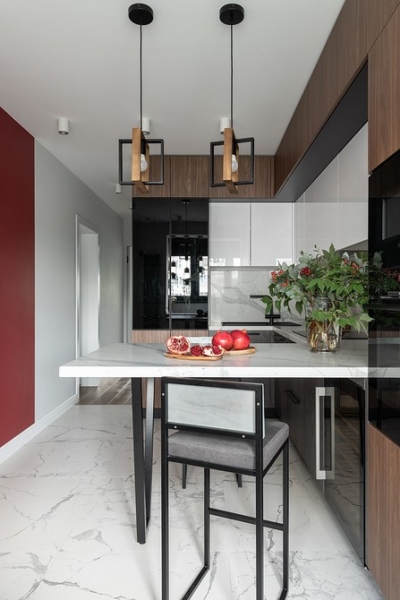 Designer Antonina Moskovtseva transformed this apartment with a typical renovation from the developer. The kitchen combined with the living room turned out to be unusual. The set was made of plywood and oak veneer, continuing the wooden accents in the form of wall and shelf finishes. It was the hostess’s wish to use more wood in the interior. The island on which the hob is installed performs the function of a bar table turned out to be functional and stylish. 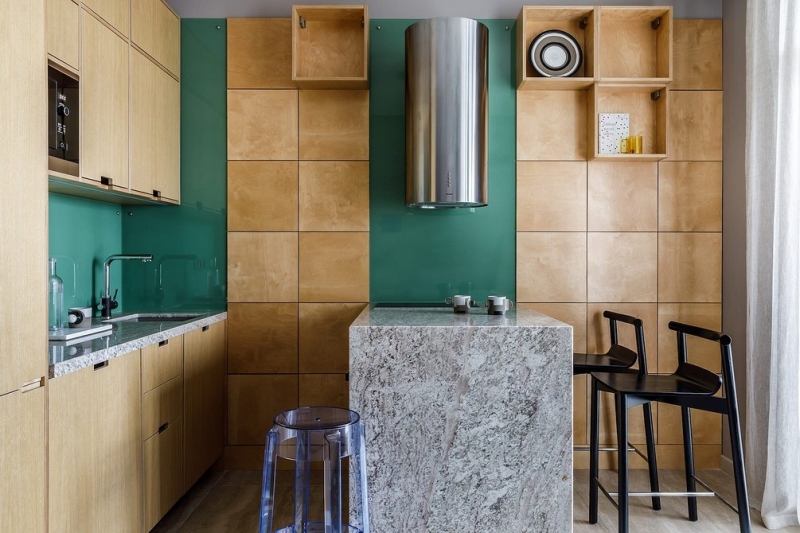 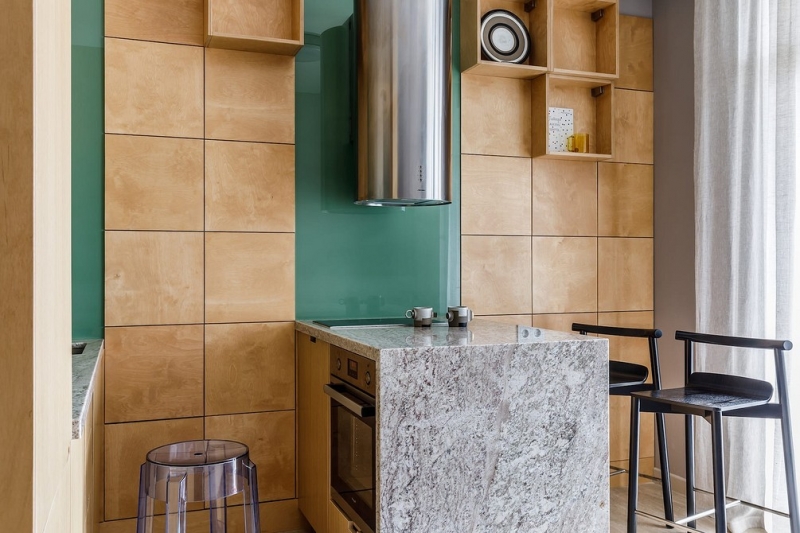 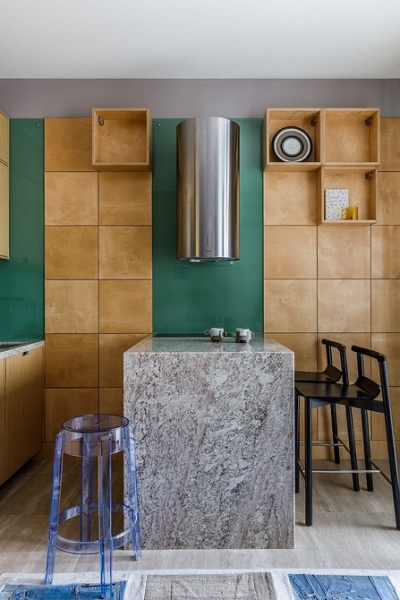 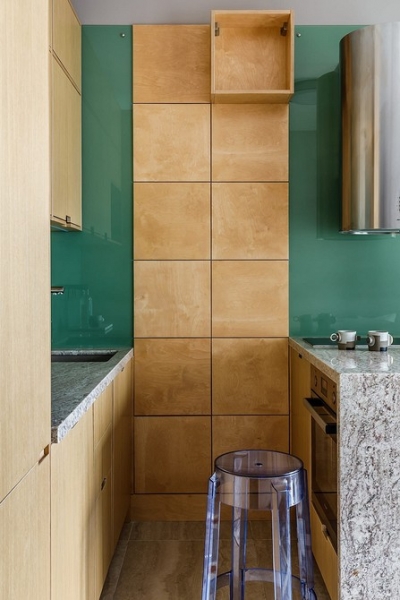 8 Kitchen in a small bright apartment

Designer Anna Gromova designed this apartment for rent. The interior turned out to be bright and functional (a kitchen, a living room, and a bedroom were allocated on a small area). The kitchen is one of the bright elements. The green facades of the columns in combination with the wallpaper on the apron look beautiful and unusual. The peninsula is part of the kitchen, it has built-in storage boxes, but it also serves as a dining table. 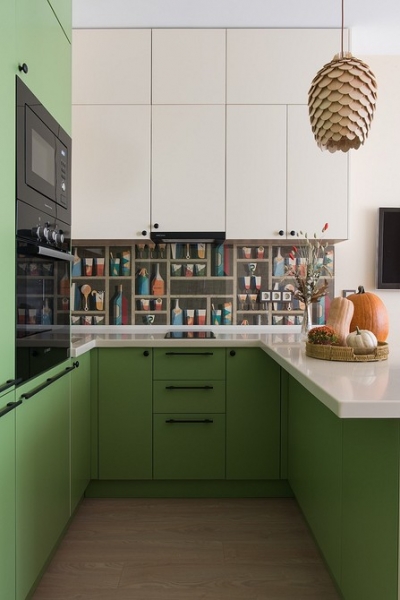 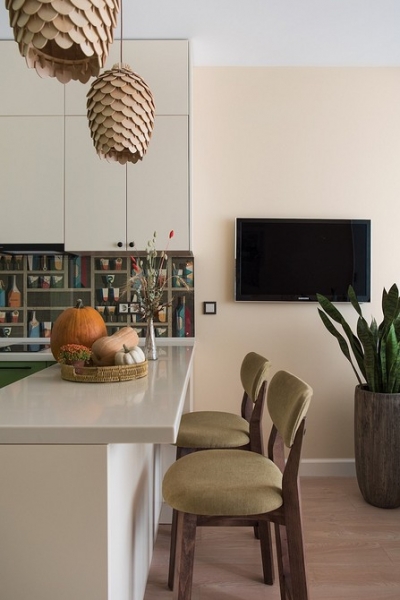 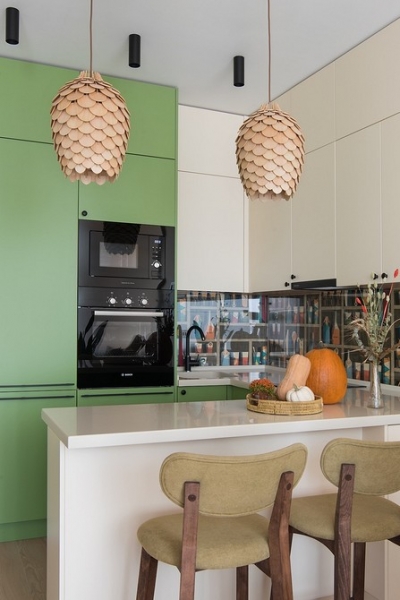