What can surprise the sophisticated Parisian public of the First arrondissement? This apartment is an art manifesto of the French artist and designer Matthias Kiss 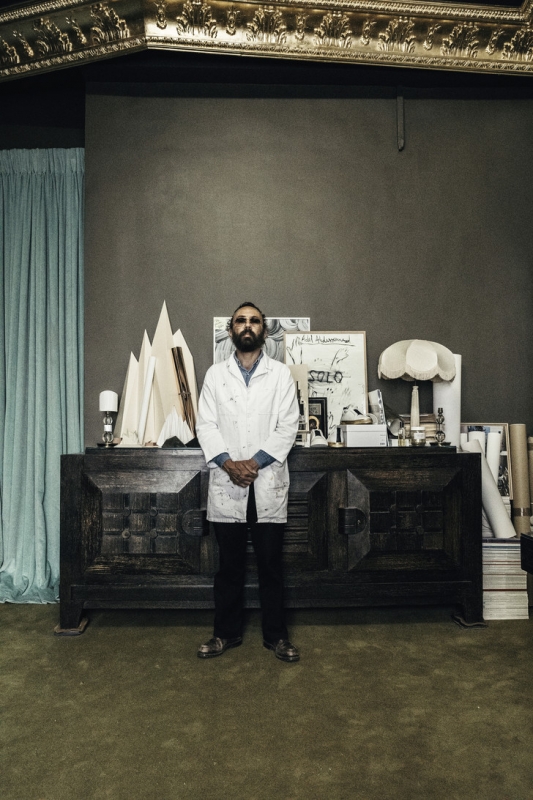 The author of the project is the artist and designer Matthias Kiss in his Paris studio on the Place des Vosges.

Paris, 1st arrondissement — we are in the oldest and most conservative part of the city, the Le Al quarter, a stone’s throw from the Louvre and the Cité. The windows of the apartment look at the church of Saint-Eustache, famous for its stained glass windows. At the same time, there is no hint of the characteristic bourgeois Parisian atmosphere in the interior — no stucco, herringbone parquet or wrought-iron elegant balcony barriers. On the contrary, the window frames are massive, industrial-looking, also painted in contrasting acid colors. The floors are rolled up with carpet with an exotic tropical pattern. And a massive gilded “snake” of richly decorated wide molding descends from the ceiling. 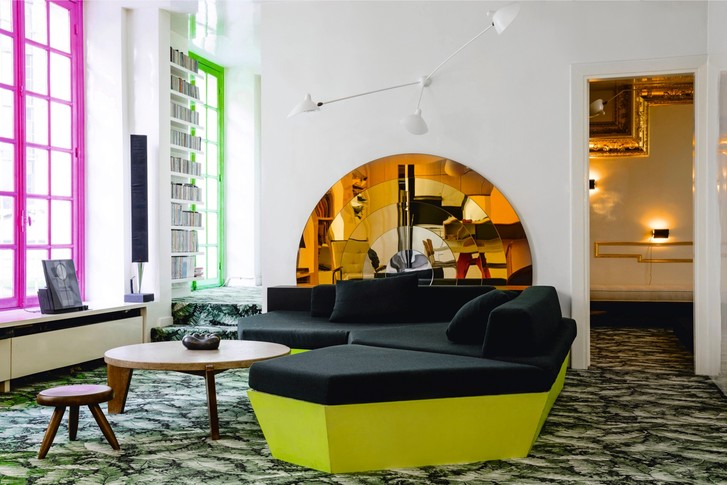 Living room. The sofa is made to order. Mirror installation Soleil (“The Sun”), designed by Matthias Kiss. There is a lamp on the wall, designed by Serge Mouille, Serge Mouille. The window frames are painted in bright acid colors. The tropical carpet pattern is borrowed from Madeleine Kasten.

Turning a living space into an experimental laboratory full of fantastic stories is already a recognizable creative method of Mathias Kiss, a favorite of Parisian galleries and fashion brands, who actively attract him either to design a fashion show, or to create an installation right in the showcases of boutiques. The artist’s portfolio includes projects for Hermès, Louis Vuitton, Kenzo, Boucheron and Wooyoungmi.

Every Frenchman’s work is shocking. Impressing the conservative Parisian public is an ambitious task, but Kiss seems to have succeeded in this. Starting his career as a restorer, he joined the famous French organization of apprentices Compagnons du Devoir, where he studied drawing, painting, various gilding methods and other traditional decorative techniques. Having gained experience, he decided to come up with plots for murals using the trompe-l’oeil technique, first commissioned by famous decorators, then for his own projects.

“Space is just a neutral shell for creativity” 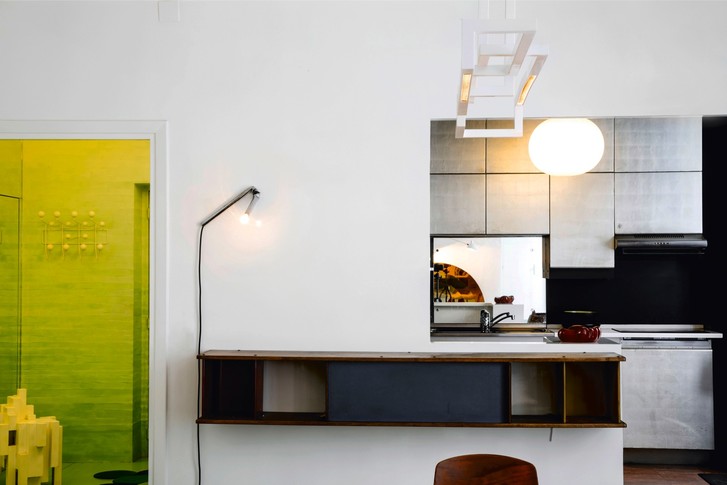 View of the kitchen from the living room. In the foreground is a shelving, designed by Charlotte Perrian.

“I perceive the space itself as a neutral shell for creativity,” says Kiss. — Customers trust my taste. The owner of this apartment collects a rare design of the XX century. The main characters in this space are the restrained objects of Jean Prouvé and Charlotte Perriand. When the things from his collection were brought to the apartment, it became clear that this was not enough. Having bought some of my works in a Paris gallery, he invited me as a decorator to rethink the whole space.” Mirrors are certainly present in every designer’s work. “They help to change the usual angle of view, from time to time everyone needs it,” says the designer. —And here, in the very center of the living room, there is also a Soleil mirror composition in the shape of a hemisphere.” 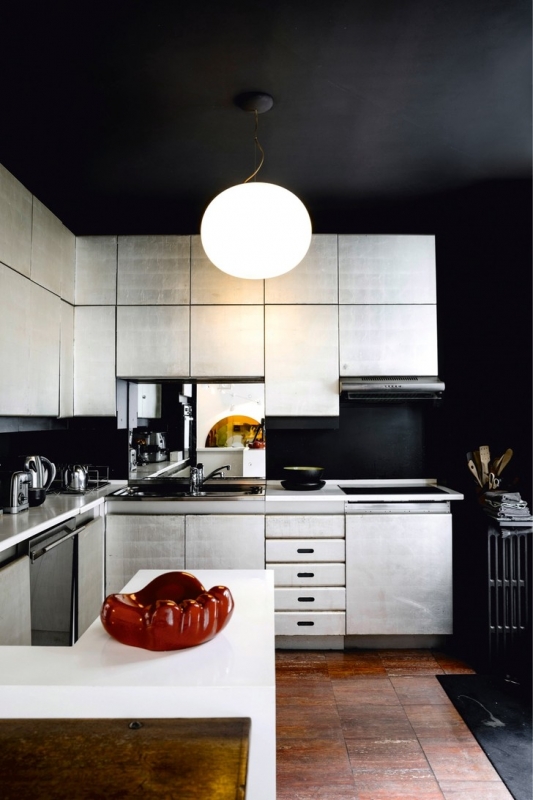 Kitchen. Finishing the facades of cabinets with silver foil. The ceiling is covered with black matte paint. Jasper Morrison pendant lamp for Flos.

Kiss’s appearance, as well as his work, is shocking. Working in his studio in a lab coat and glasses, he resembles an alchemist and poses for photographers in the same image. Furniture design is another area of interest for Kiss. The sofa, shaped like a block of ice or the tip of an iceberg, is made according to his drawings. “My approach to design and decoration is to deny existing dogmas,” says Mathias. — I am for complete freedom of thought and self-expression. I want to hack this program and change all existing codes. In France, with its traditional way of life, it is difficult, but possible.”

In the creative environment, Kiss is often called too eccentric. “It’s not annoying until it becomes a label—” he concludes. — The funny thing is that in traditional society I am considered a punk, and in the world of modern art they refer to hyperclassics. I’m trying to sit on two chairs.” 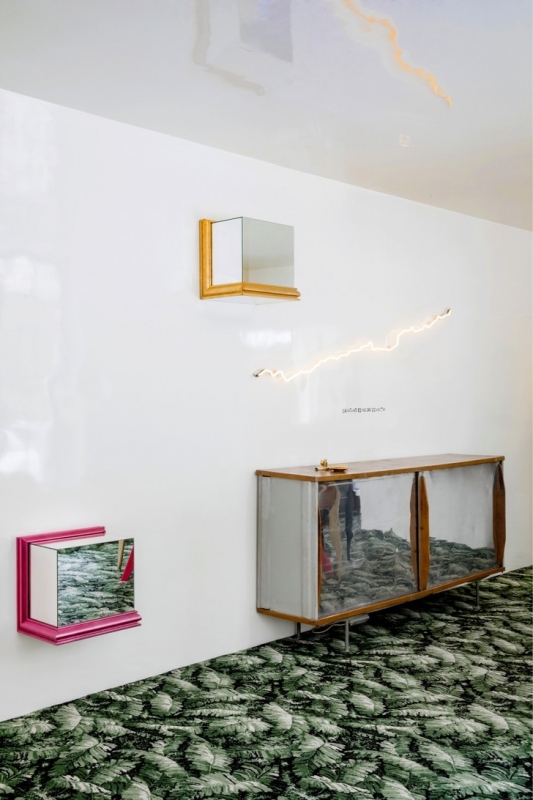 Canteen. Table and chairs, designed by Jean Prouvet, from the collection of the owner of the apartment. On the wall is a Froissé mirror panel, designed by Matthias Kiss, Galerie Armel Soyer.

“In a conservative society, I am a punk, but in the world of modern art, I am classified as a hyper-classic” 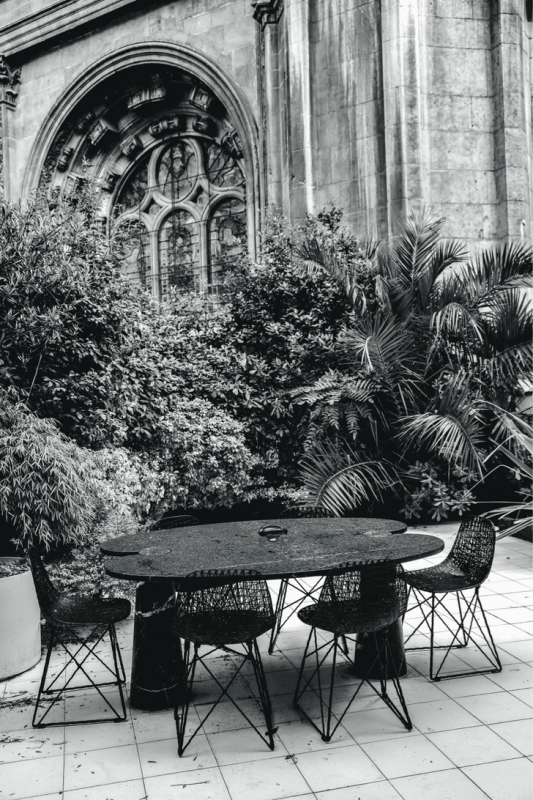 The terrace on the side of the street, which looks at the church of Saint-Eustache. Table, Mangiarotti. Chairs, Moooi.