This apartment in the center of Moscow was received by the grandfather of the owner, in the year when the house was built. Now a young married couple lives here, they needed to arrange the space for themselves, quite modern, but to keep the things and memories dear to their hearts. 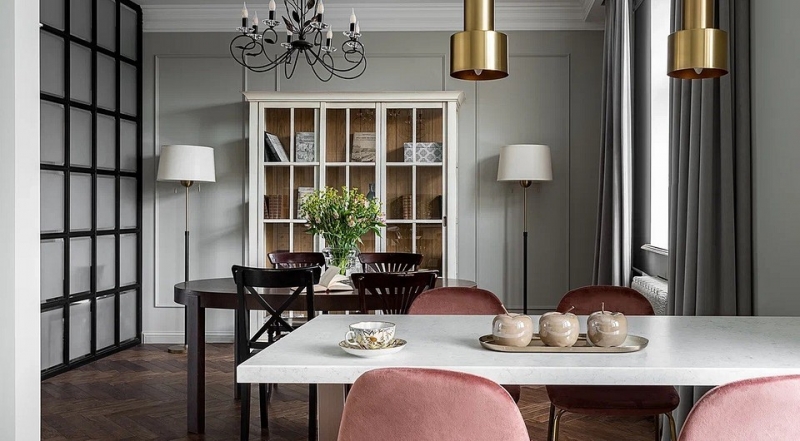 The owners of the apartment are a young married couple, lovers of travel and music, who not only listen, but also play musical instruments. The housing in the Stalin-era house was inherited by them from the grandfather of the owner, he settled in this house with his family when it was built, in 1940. The couple turned to designer Galina Sokolova with a request to rebuild their apartment, they needed a redevelopment that would make the space comfortable; a new interior with modern comfort. But I didn’t want to go into an ultramodern style, after all, a house with a history, besides, customers still had valuable vintage items that allowed them to create an appropriate atmosphere. 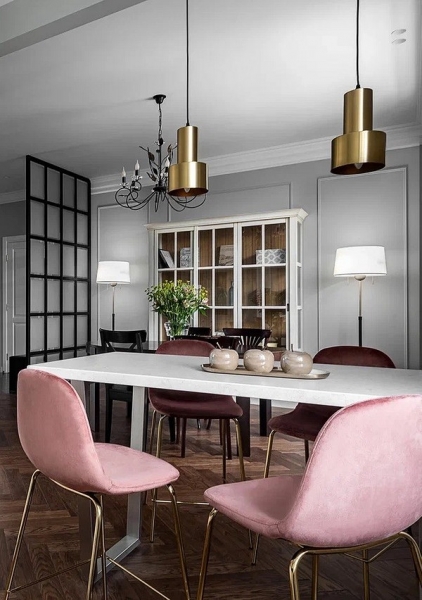 According to the original plan, the 100-meter apartment had four rooms (two of them adjacent), a kitchen, two bathrooms. The rooms were connected by a large hall, and a small corridor led to the kitchen. The owners needed redevelopment, they wanted space, combined space: a common kitchen-dining room, a large living room. Only a private block with a bedroom should have been isolated. The designer proposed just such a redevelopment. 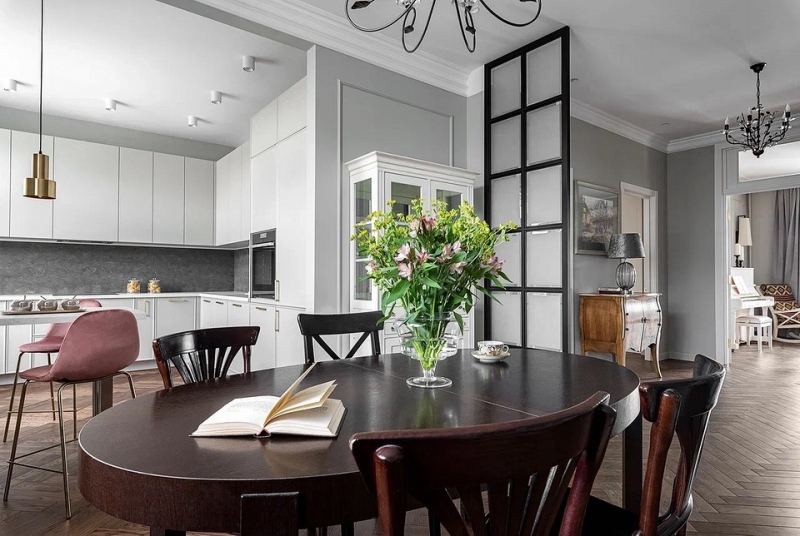 Two adjacent rooms were combined into a common large living room. They removed the wall between the room and the kitchen, making a large kitchen-dining room. To implement this solution, I had to officially abandon the gas in the kitchen and switch to an electric stove. The blind partition between the dining room and the hall was replaced with a glass one. 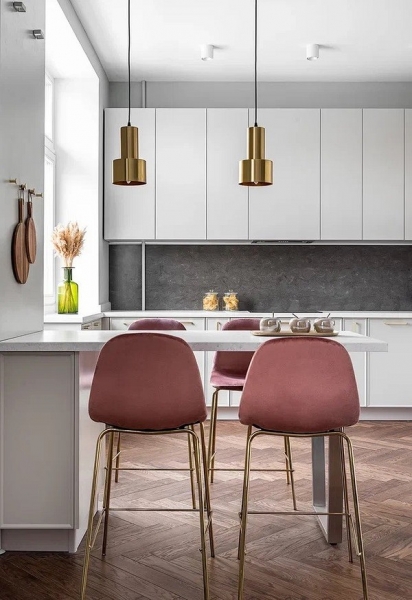 The bathrooms were also redeveloped. The small one was expanded to the area of the adjacent corridor, and the second one had an entrance from the bedroom. Thus, the apartment has two full bathrooms: one with an exit from the bedroom, the second from the corridor. 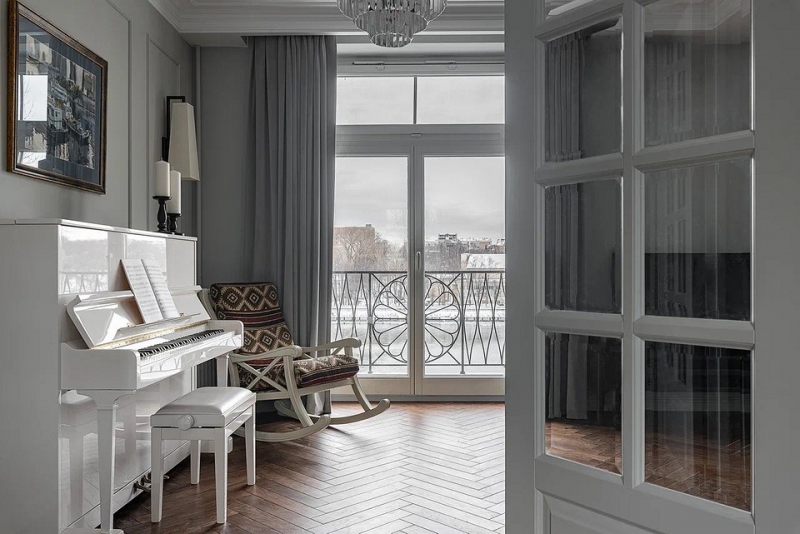 Paint was chosen for the walls in all rooms except the bedroom. They were decorated with moldings, adding classic accents. In the bedroom, wallpaper with a geometric unobtrusive pattern was used. On the floor in the kitchen-dining room, living room and bedroom there is an engineering board laid with a herringbone. There are tiles in the hallway. Bathrooms were decorated in different ways. The master’s porcelain granite looks like marble with gray streaks. The guest looks elegant. Here the gray paint on the walls is combined with emerald rectangular tiles. On the floor there is the same porcelain stoneware under marble. 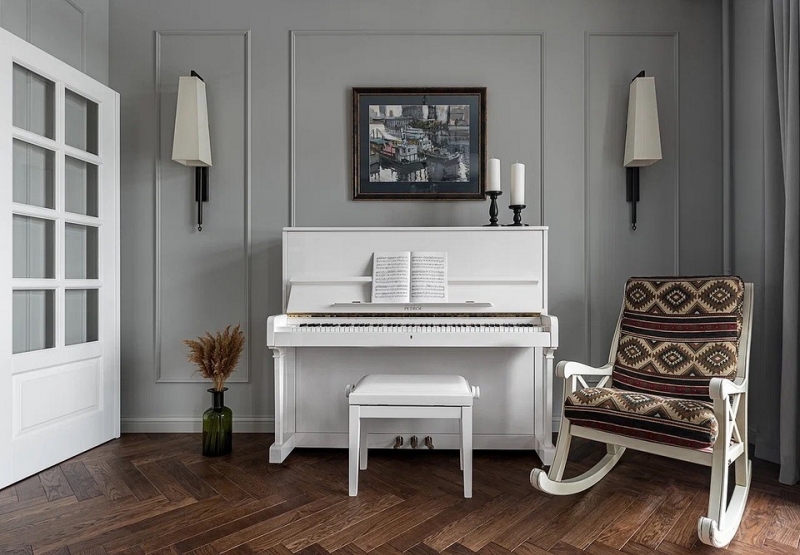 The apartment has several dimensional storage systems. The living room has closed cabinets with slatted and glass facades. There are wardrobes in the bedroom. A small storage room was made in the guest bathroom for storing household supplies. Additionally, a wardrobe in the hallway, a sideboard and a bookcase in the dining area were provided. The kitchen set was made angular with an additional bar counter. All necessary appliances are built into kitchen cabinets. 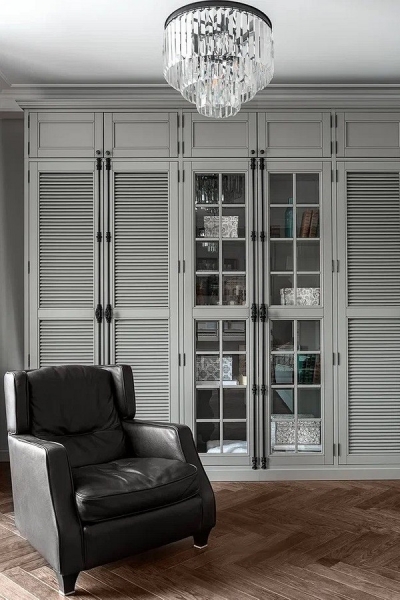 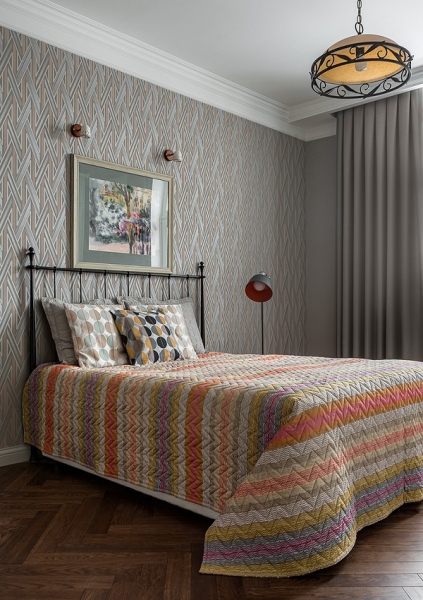 The antique chest of drawers, which now took pride of place in the hallway, the piano in the living room and the bookcase in the dining area belonged to the owner and were in this apartment. The rocking chair, which now stands next to the instrument (it belonged to grandfather), also belongs to the same things. The designer, even at the planning stage, thought out such places for them to highlight, to make the heroes of the interior. 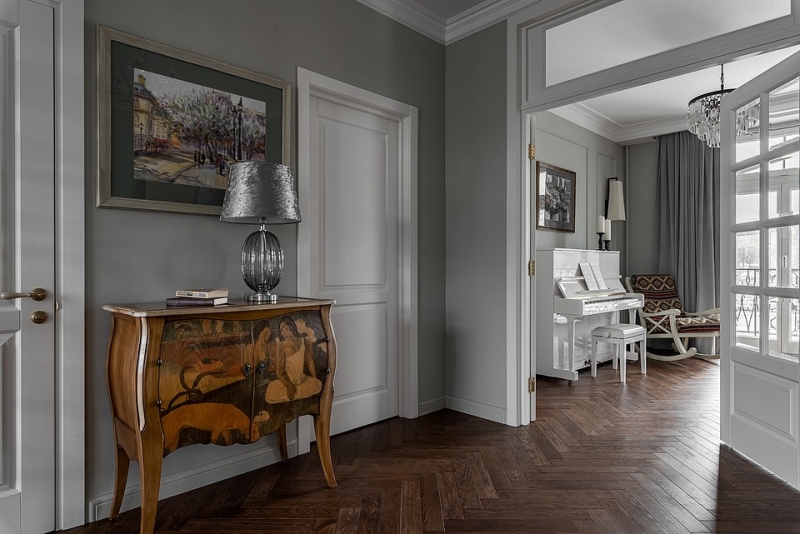 The author of the project has thought through several lighting scenarios. These are ceiling built-in lamps that give a bright light. Sconces and floor lamps, suspensions above the bar, which are designed for soft evening light. And decorative ceiling chandeliers above the table, in the living room, in the bedroom, which also decorate the interior. 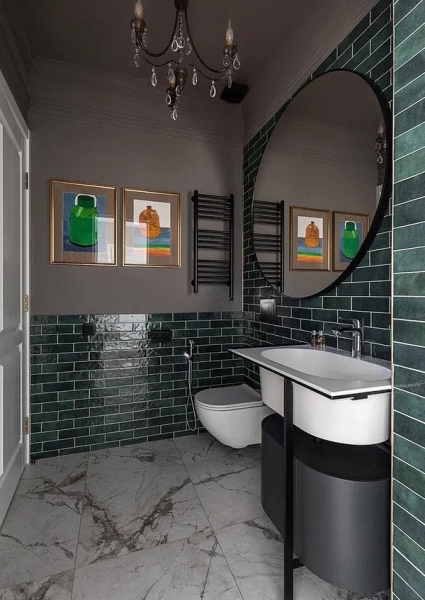 The customers wanted to get a fashionable modern interior with an echo of Moscow in the 30-40s. It was then that this house was built. The apartment uses architectural techniques of classical enfilade space and symmetry, while all this is complemented by rather daring loft-style elements, such as a partition separating the hallway and dining area. The customers set the task “to make as much open space as possible”. Therefore, the hallway area smoothly passes into the dining area on the left and into the living room area on the right. All three spaces, like communicating vessels, flow into each other. Only the bedroom area with its own bathroom remains isolated. 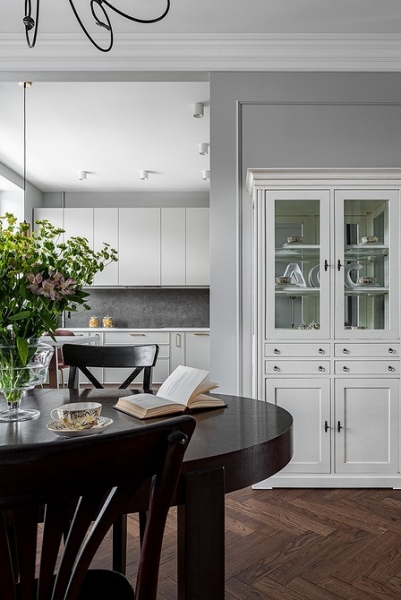 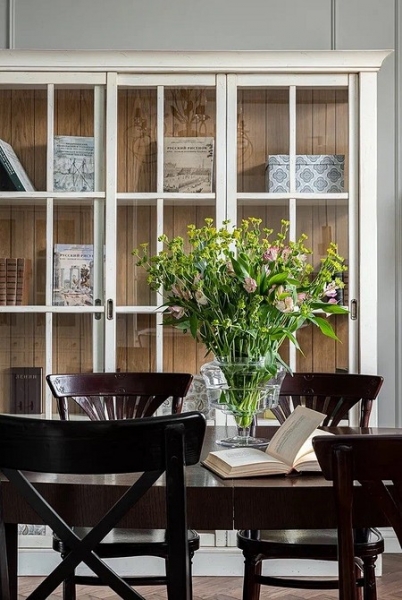 Fragment of the dining room 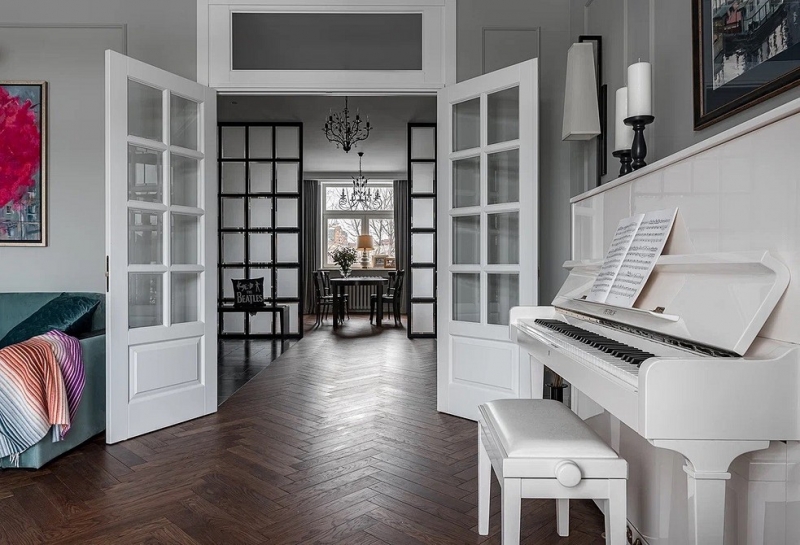 View from the living room to the hall and dining room 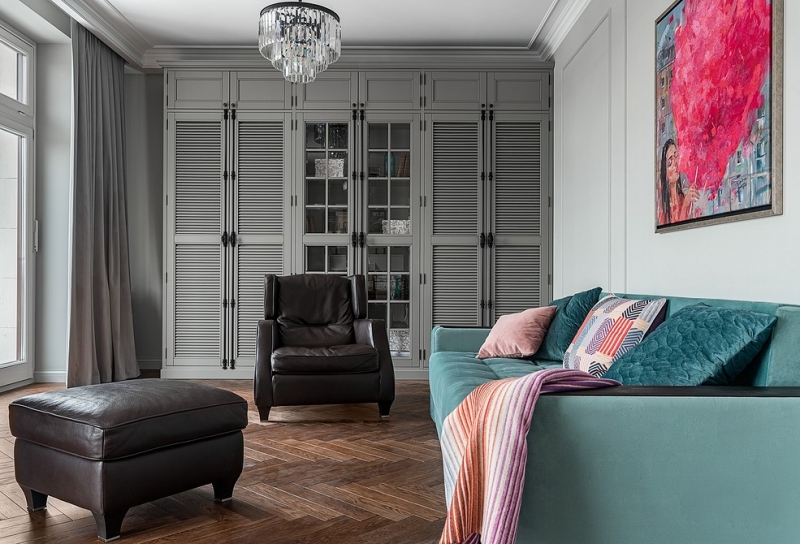 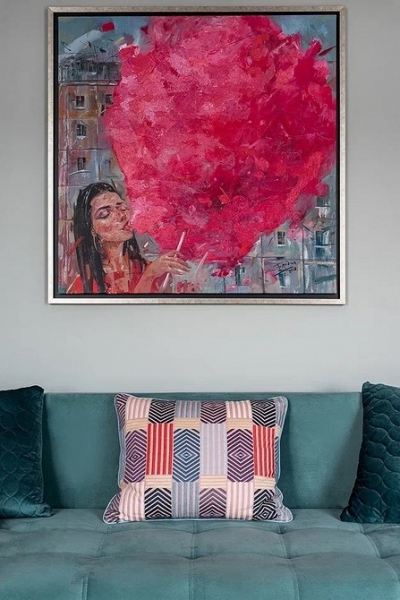 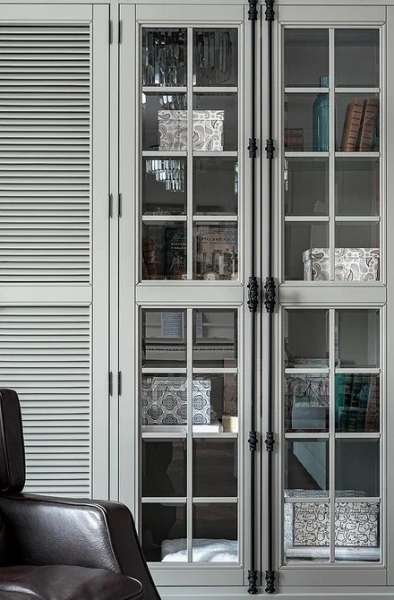 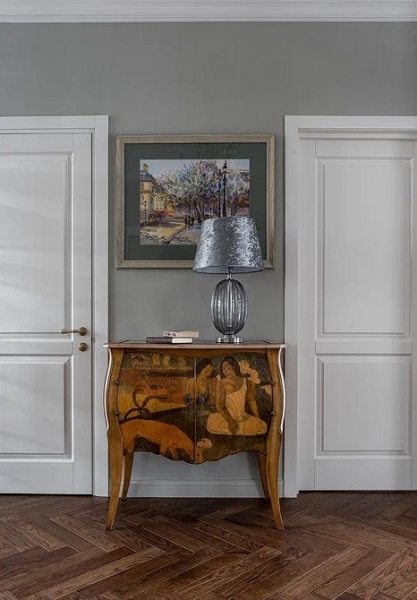 Hall, bathroom door on the left, bedroom on the right 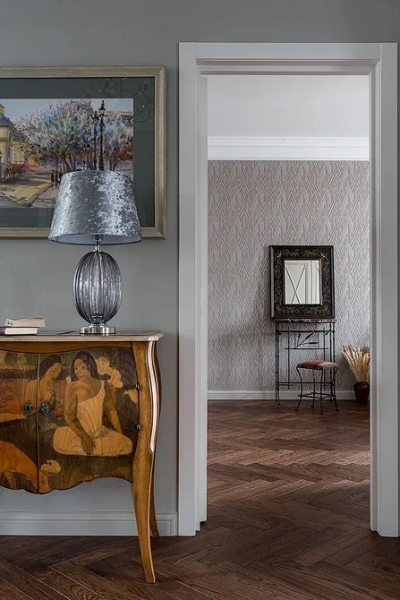 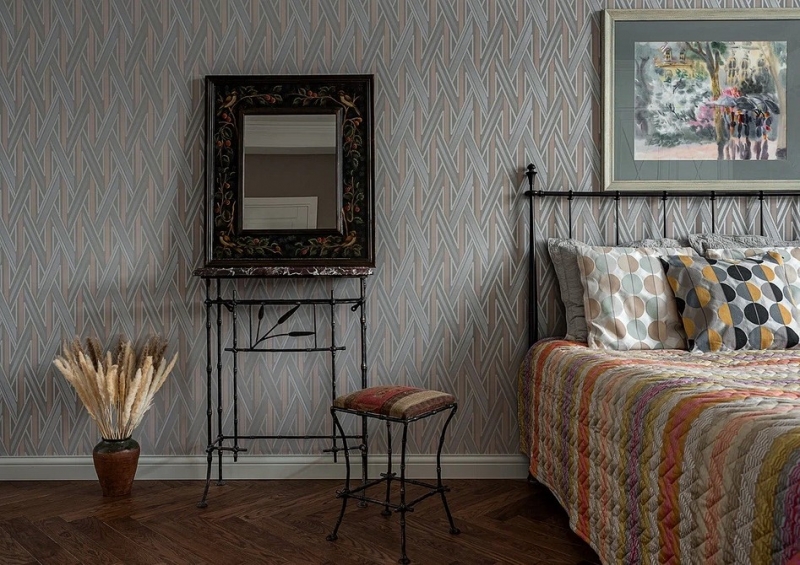 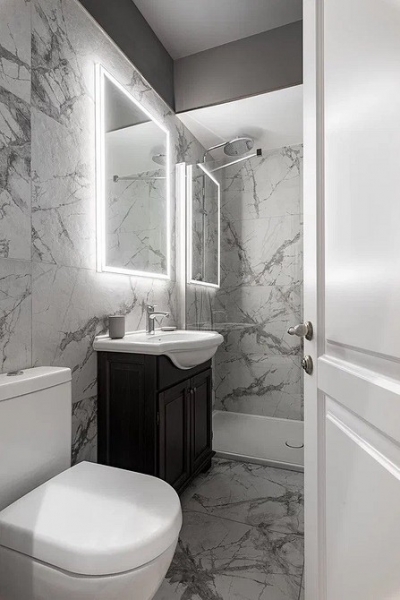 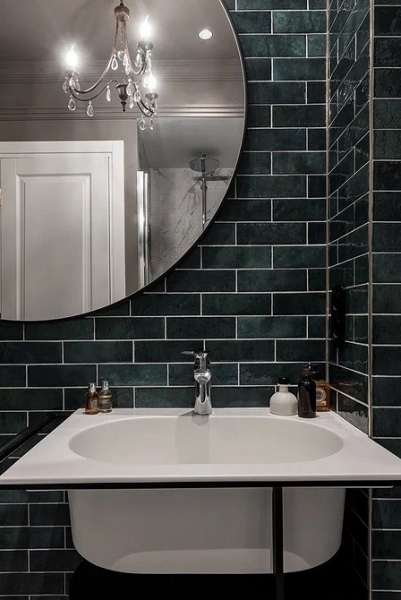 Guest bathroom, the door to the pantry is reflected in the mirror 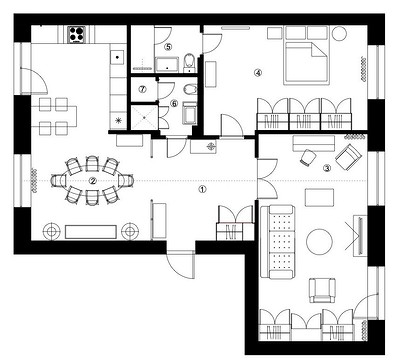