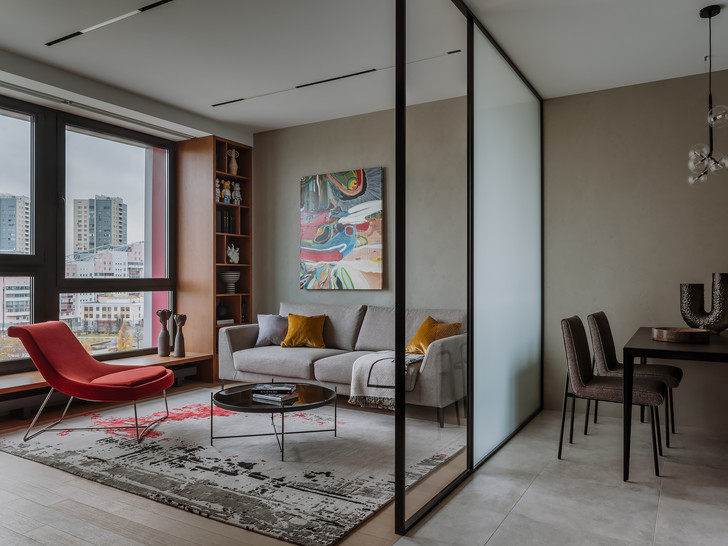 The customers are a modern, progressive mother and son, who will then live in this apartment. The mother in this family is an active, modern woman, with high demands, refined taste and interest in modern design. The son is a perfectionist, loves minimalism in all its manifestations, is fond of modern art. The young man’s wish was to create a monochrome “male” interior, which would use complex shades of gray and textures of concrete. 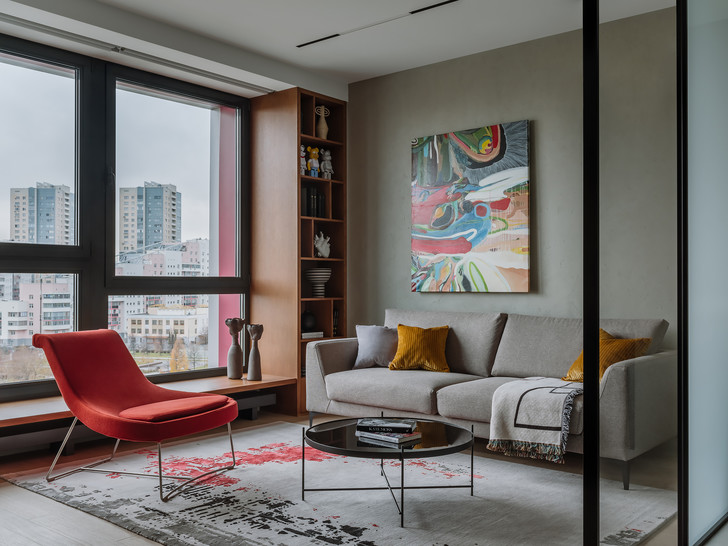 “It was this color palette that I took as a basis,” says designer Ksenia Konovalova. – Earthy-gray textured walls, doors painted in the same shade, porcelain stoneware on the floor, maximally repeating the shade of the walls, facades of built-in furniture, selected to be as inconspicuous as possible, the neutral color of the parquet board – all this creates a restrained, rather ascetic atmosphere.

I have always sincerely liked clean, ascetic, sometimes even harsh Japanese interiors, but at the same time I have always wondered how to live in such interiors, whether it is comfortable in them. Therefore, here I decided to add a bright, contrasting detail to the monochrome shades of materials — natural oak, tinted in a warm, rich color. Thanks to the “spot” use of wooden elements in each room, the atmosphere immediately became more cozy. And the bright decor and paintings bring individuality to the interior, reflecting the hobbies of its owner.” 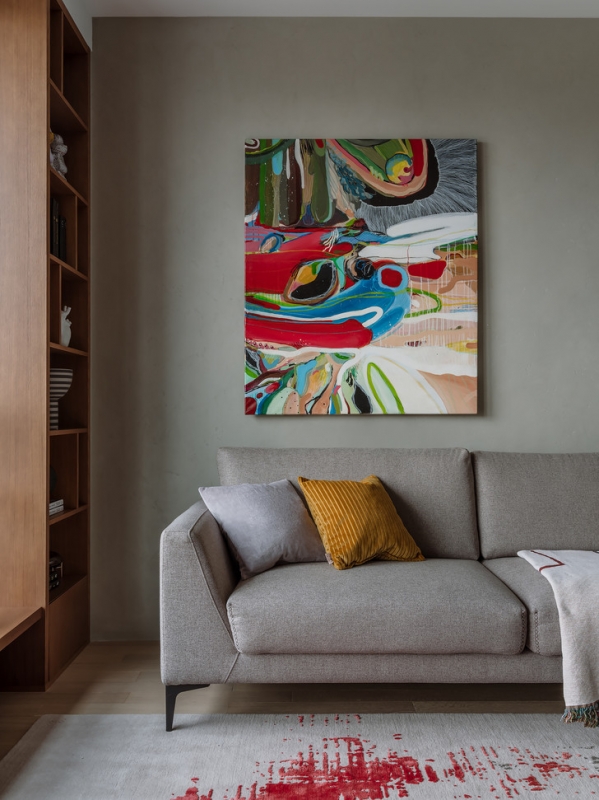 The room consists of two combined apartments with an area of 31.5 m2, in each of which balconies and areas for outdoor air conditioning units were allocated, eating up part of the living space. But since the object has the status of apartments, the balconies could be dismantled, which greatly facilitated further work.

“One of the most time-consuming and meticulous moments in working on the project was the development of a planning solution,” says the designer. —On the one hand, the space should have been as uncluttered and spacious as possible, and on the other, as functional as possible.” As a result, it was possible to place a kitchen-living room, a bedroom with an office, a spacious hallway, a bathroom and an additional bathroom with a laundry room on a fairly small area.

The advantage of these apartments are large panoramic windows and a beautiful view of the park, so almost immediately it was decided to make a wide, used window sill in the living room. This gave the opportunity not only to enjoy the views from the window, but also to expand the number of seats in case of arrival of guests. The window itself was not covered with curtains, only roller blinds were used to protect it from sunlight. So the window in the living room, thanks to its impressive size and unusual window binding, has become a full-fledged architectural and stylistic participant in the interior. 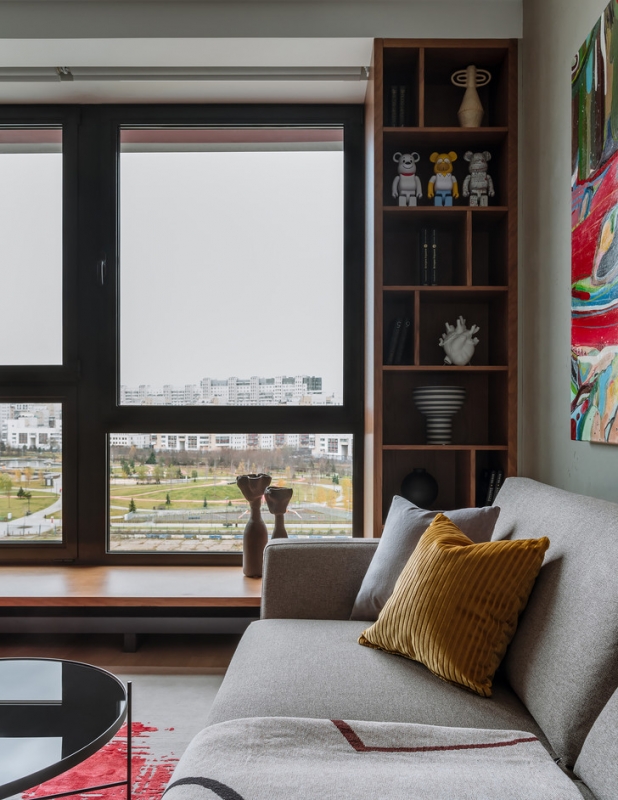 The shelving and window sill are made according to individual sketches of the designer at the Lesgrand factory.

“Initially, we did not plan a chair in the living room,” Ksenia continues. — The room was not very large, and we did not want to clutter it with extra furniture. It seemed that a sofa and a wide windowsill would be absolutely enough for seating guests. But towards the end of the project, when the sofa and carpet were already brought, the customers remembered that they had a red armchair of an interesting shape, bought long before that. Looking at the photo, I thought that I could try to integrate it into the project. When the chair was brought, it just stood up perfectly and instantly became an integral part of the interior, as if it had always been conceived there.”

One of the wishes of the customers was a partially isolated kitchen. The owner of the apartment did not like the open layout with the common space of the kitchen-living room-dining room, he did not want to see the kitchen sitting on the sofa. So there was a decision to separate the kitchen-dining room from the living room with a combined partition made of frosted and transparent glass: it hides everything superfluous and at the same time still lets light into the kitchen. With its size and graphic frame, the partition harmoniously echoes the window in the living room. 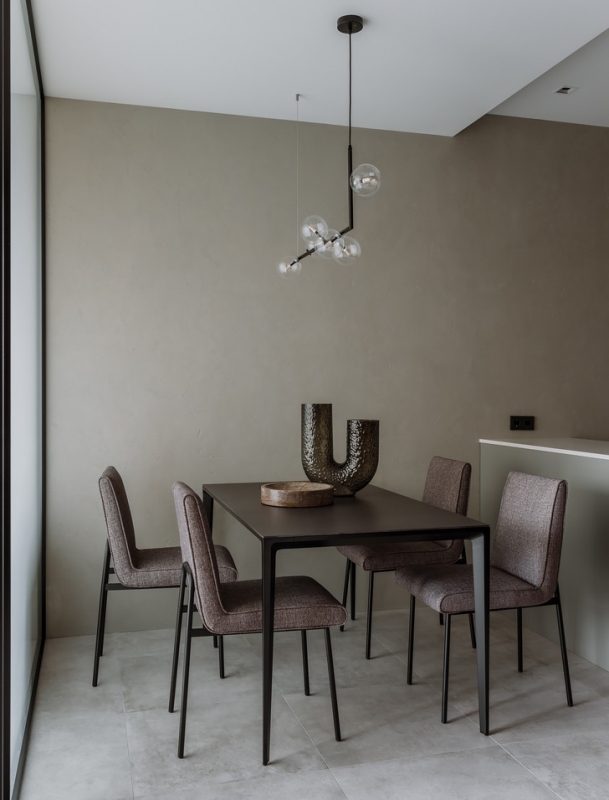 The table is made according to individual sketches of the designer. Chairs, La Redoute. Ceiling lamp, Romatti. Vase, L’appartment.

The kitchen was supposed to be as functional and inconspicuous as possible. Therefore, the designers chose simple laconic facades, similar in hue to the color of the walls. The upper hinged cabinets were made solid, without mezzanines, although the height allowed – specifically so that there were fewer “divisions and gaps”. The small island turned out to be functional and roomy, so there were enough places for storage and work areas, despite the small size of the kitchen area.

The decoration of the monochrome, minimalistic kitchen was a wall of tinted oak veneer. It not only softens and enlivens the ascetic color scheme, but also hides an additional high storage case.

The same veneered panels appeared in the bedroom, on the wall at the head of the bed. The soft, warm color of natural oak with its natural pattern and picturesque texture contrasts with the strict, graphic slats of sliding doors, behind which the work area is hidden, as well as the simple facades of built-in and freestanding furniture. In combination with soft textiles, an interesting atmosphere has turned out, where ascetic minimalism is mixed with warm, cozy, soft details. 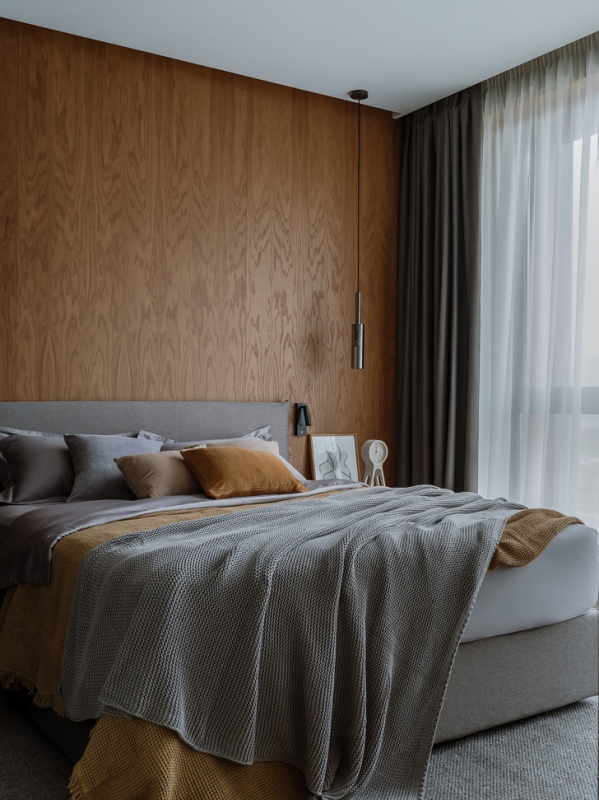 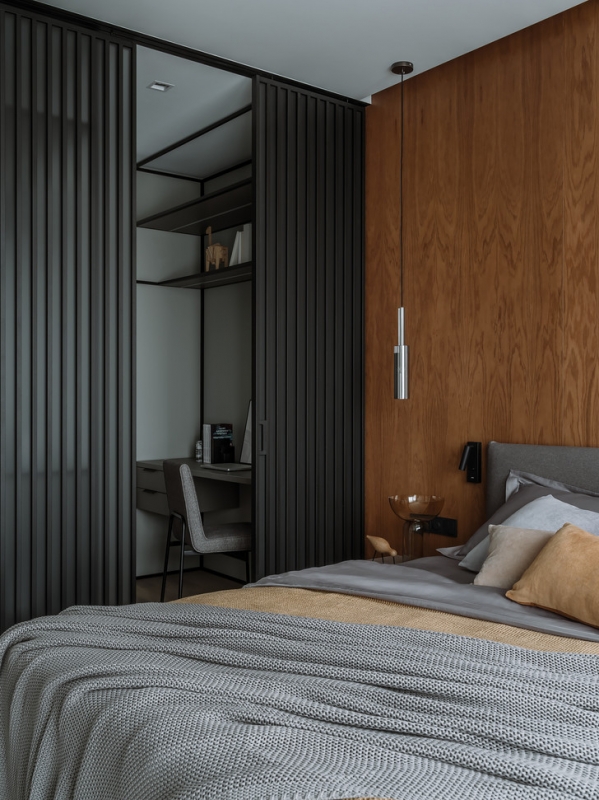 The theme of lines and graphics can be traced throughout the interior: graphic partitions, black slats, metal shelving in a miniature office… In support of this motif, a relief ceiling consisting of veneered beams appeared in the hallway: with its plasticity and rhythm, it visually expands the elongated room. In addition, the graphics theme is enhanced by black straight lines of ceiling lighting and elements of free-standing furniture. 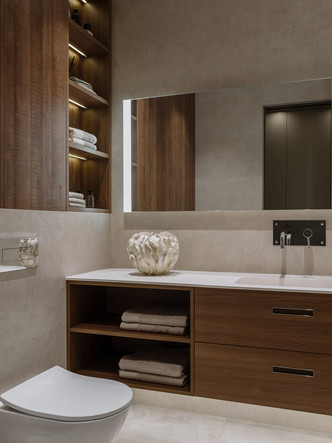 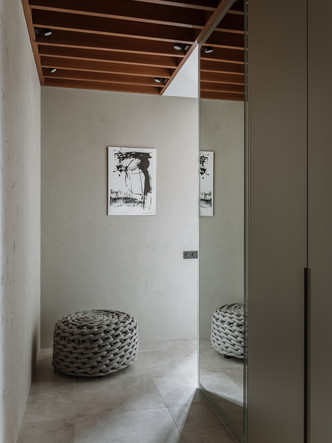 “In this project, I especially appreciate the accuracy and precision. There are no ill-conceived places, random decisions, bad joints, ill-conceived shades. The size of each aisle, each cabinet, the width of each shelf and their number are precisely measured and calculated. Shades, textures and colors are carefully matched to each other, – says the designer. — Work on this project has been going on for quite a long time, but as a result, the young man was very happy to move to a new home and now he tells everyone that he is cozy and comfortable here. This is the best result for me. This means that all the nuances were taken into account, the little things were not forgotten, everything turned out exactly in the puzzle that was needed.” 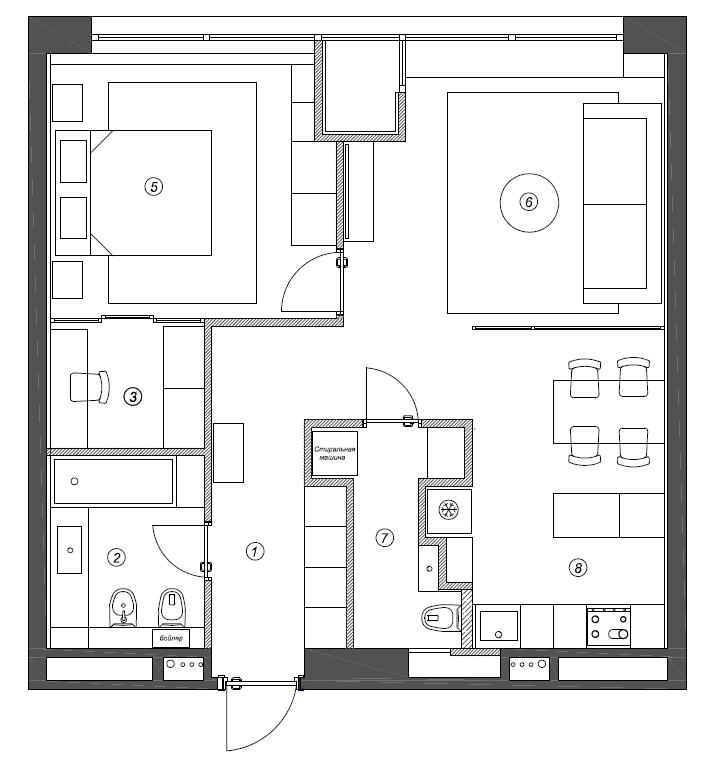