It’s hard to believe that this house is not located in the English province, but in the suburbs of Minsk. Designer Ekaterina Trukhanova tells how and from what this atmospheric interior was assembled 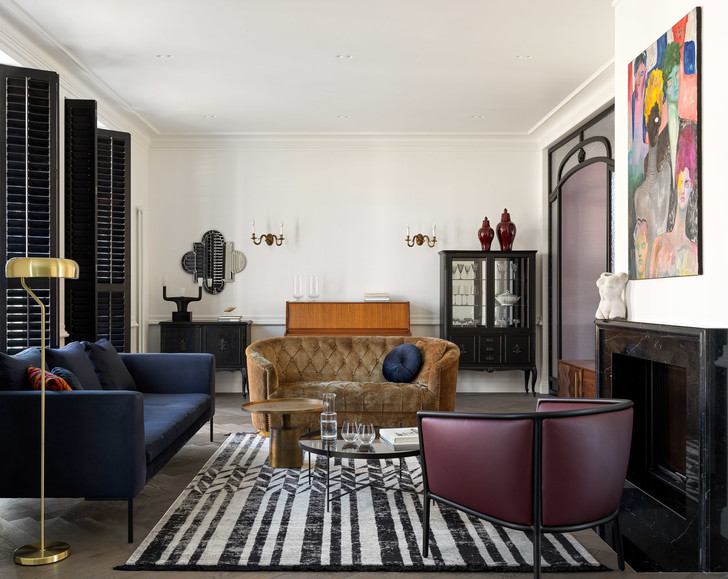 “When I was thinking about the interior, I imagined not furniture or accessories, but the mood”

Where is located: Minsk

The main idea of the project: preservation of family values 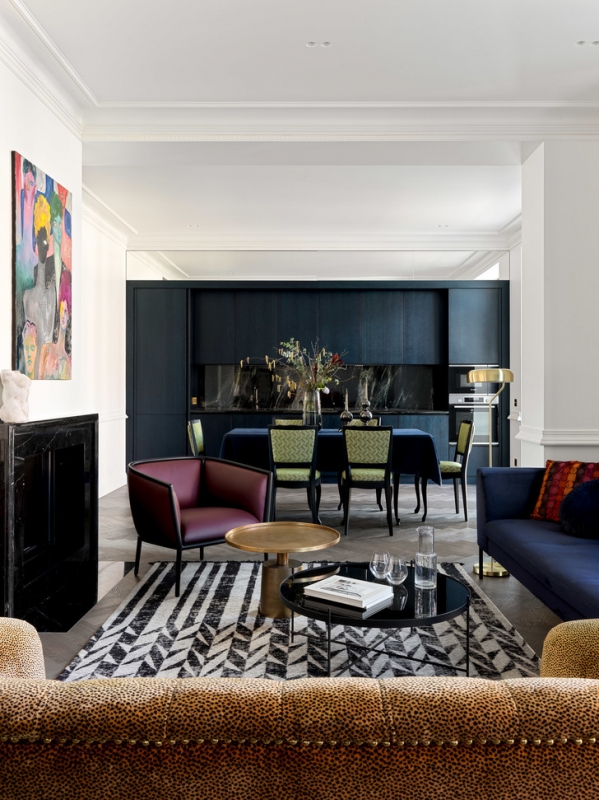 Many designers say that it is difficult to make an interior for themselves, for them it is a kind of challenge. But not in my case. I designed this house for myself and my family and from the very beginning I knew what I wanted and what its general concept and idea would be. In our office we create projects in different styles and for different customer requests, the main thing for us is to create comfort and inspiration. 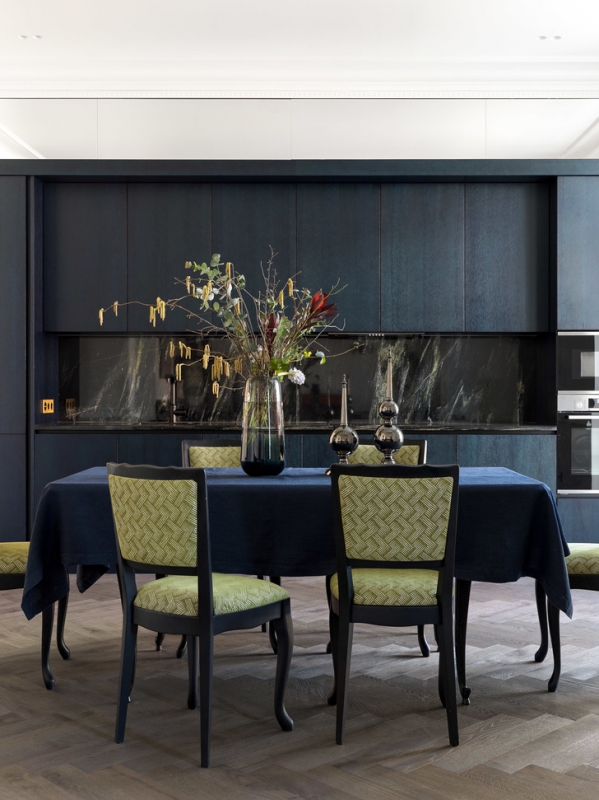 Thinking about the interior, I didn’t think about furniture and accessories, but I imagined a Christmas mood by the fireplace with my family under the dim lighting of antique wall sconces, breakfast with my husband on a mini-terrace overlooking the forest, friendly evenings in the dining room by candlelight at my grandmother’s restored table.

The box has been standing at home for 10 years. Small, asymmetrical windows, a high entrance, small rooms made it uncomfortable for modern life. I replaced white plastic windows with black ones with shutters, bringing symmetry into them and increasing them to 2.8 meters in height — and these windows became the starting point for the entire interior, setting the atmosphere of old urban England.

The successful location of the windows and their stylish design made it possible to abandon curtains throughout the house. Only on the ground floor in the living room there are shutters to protect the room from the sun and from prying eyes in the evening. 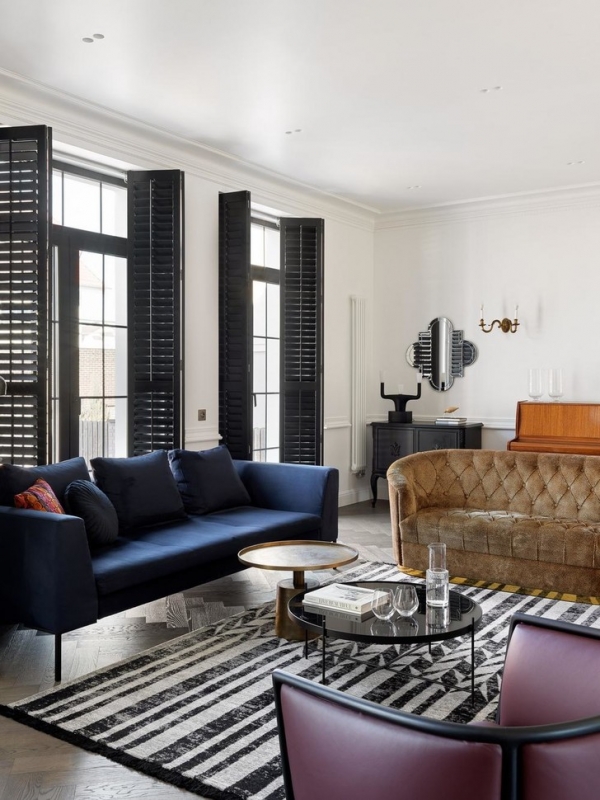 Outside, the staircase to the main entrance was expanded, the entrance group was centered on it, emphasized with columns and supplemented with a mini-terrace on the second floor. On the side of the courtyard, a two-level terrace with a dining and living area and storage areas under it was attached to the house.

The supporting structure was strengthened, and the wall between the kitchen and the living room was dismantled — so the rooms became a single space with two entrances from the corridor, emphasized by neat arched partitions. 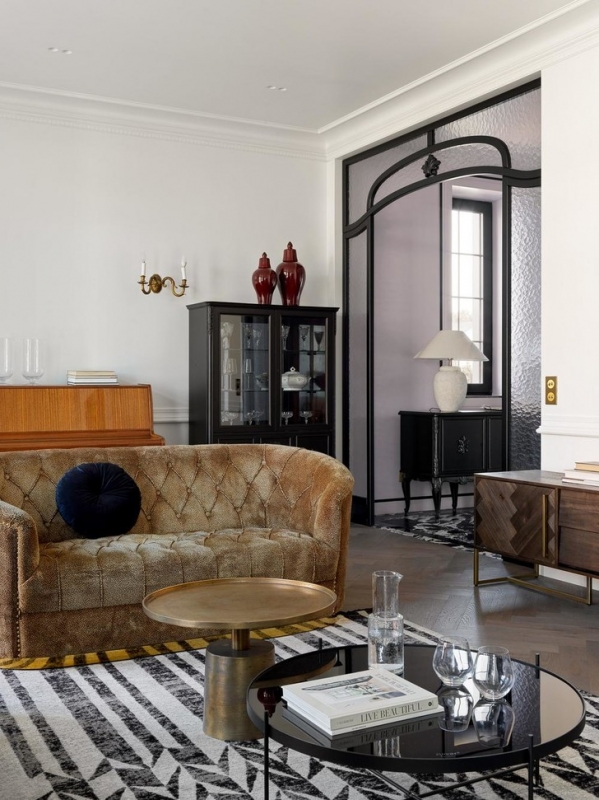 The interior formed by itself, flowing from room to room, telling the story of our family, giving free rein to creativity and creating comfort in every detail.

The starting point of the interior was an elegant Soviet chest of drawers of vintage brown shade, located at the main entrance to the house, which it was decided to repaint in graphite color and decorate with volumetric plaster lamps with linen lampshades. The black tile on the floor with active white streaks perfectly contrasted with the delicate lavender walls. 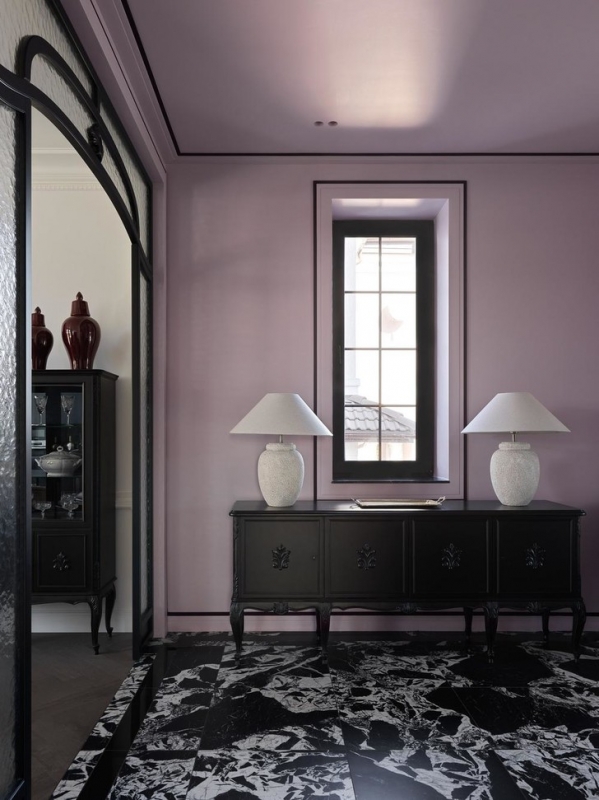 Hall, fragment. The chest of drawers is a family heirloom that has been restored. Lamps, Zara Home.

We already had most of the interior items. We got something from our grandmother’s Soviet apartment, some of the parental furniture from the 2000s we converted to the concept of the house. Antique bronze sconces from the end of the XX century were found in an antique shop, and it was decided to leave our old piano as it is: the third generation of the family plays it. 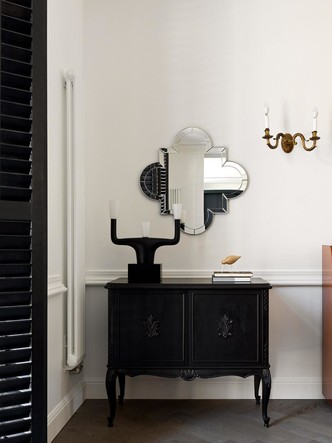 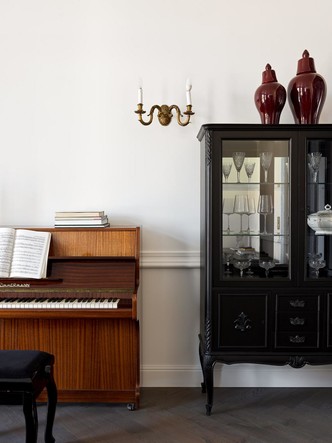 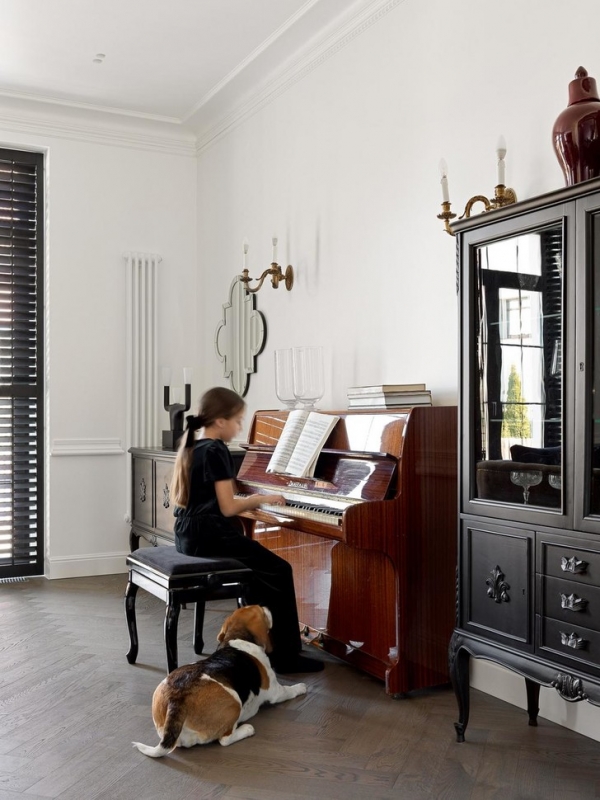 Living room, fragment. The piano belongs to the designer’s family, it is played by the third generation.

At first glance, a small bedroom, but with its own wardrobe, bathroom and terrace, became a continuation of the theme of contrasts. The main character here is a Romanian restored bedroom suite “Louis XVI”. Initially, Louis XVI furniture was designed for the new apartments of the Palace of Versailles and the Fontainebleau Palace of Queen Marie Antoinette. The best masters of that time, like Georges Jacob, Jean-Francois Lele, were engaged in the design and manufacture of such furniture.

To integrate the elegant headset into the overall concept of the house, it was decided to leave the walls in plaster, and not even decorative, but ordinary construction, covered with matte varnish. The ceiling baseboard was painted in the style of modern sketching. The door to the wardrobe with a crown and even a medallion plays up to the eclecticism of the interior. 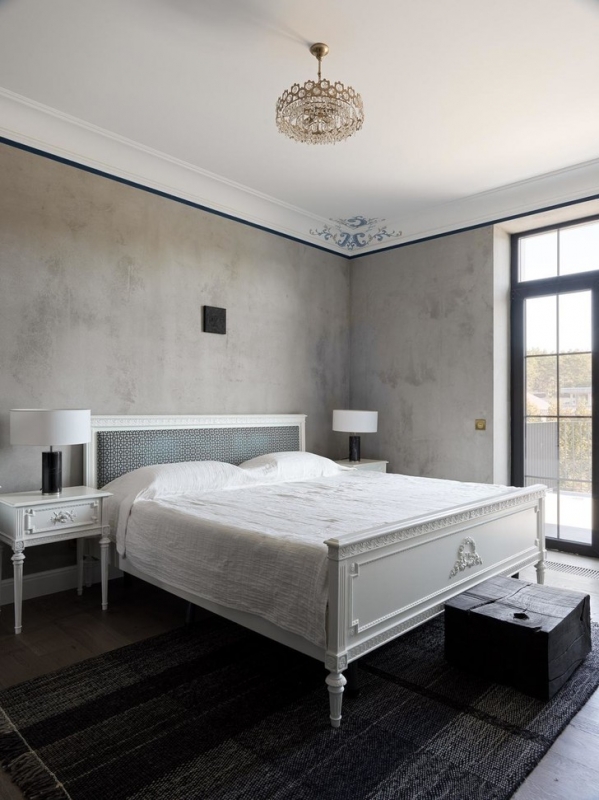 Since the entire renovation of the house was completed in six months, and the construction work was going on rapidly, without interruption, funny situations came up from time to time. For example, the builders constantly left some inscriptions on the plaster of the walls: they could not believe that it would be left in the bedroom as a finishing finish for the walls. 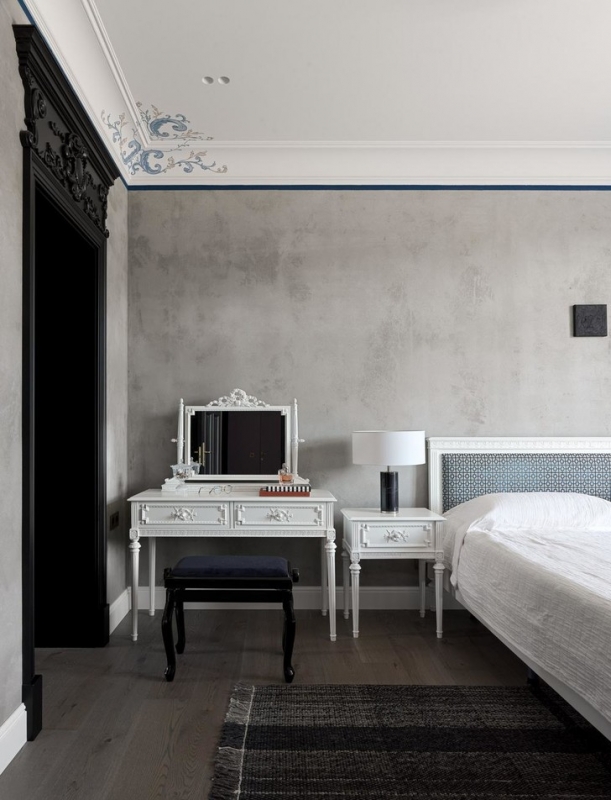 The bathroom on the ground floor is a continuation of the theme of old England. Free-standing classic washbasins on the footboard, ornate mirror, English wallpaper on the walls with black and white tropical jungle and animals and accent high window can not but fascinate. 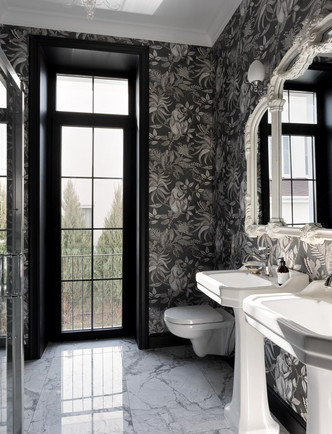 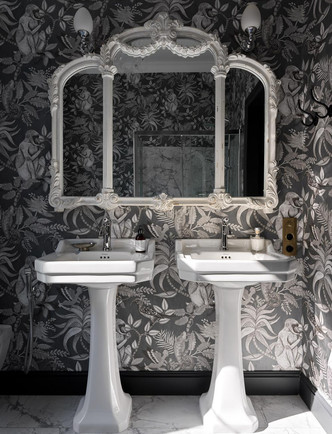 The dressing room became a continuation of the corridor and the bathroom: opposite the entrance there is an understated detached vintage wardrobe on chiseled legs from the collection of a bedroom suite, in the center there is a voluminous minimalistic modern pouf with a convenient side table, and along the walls there are graphite volumetric storage spaces. 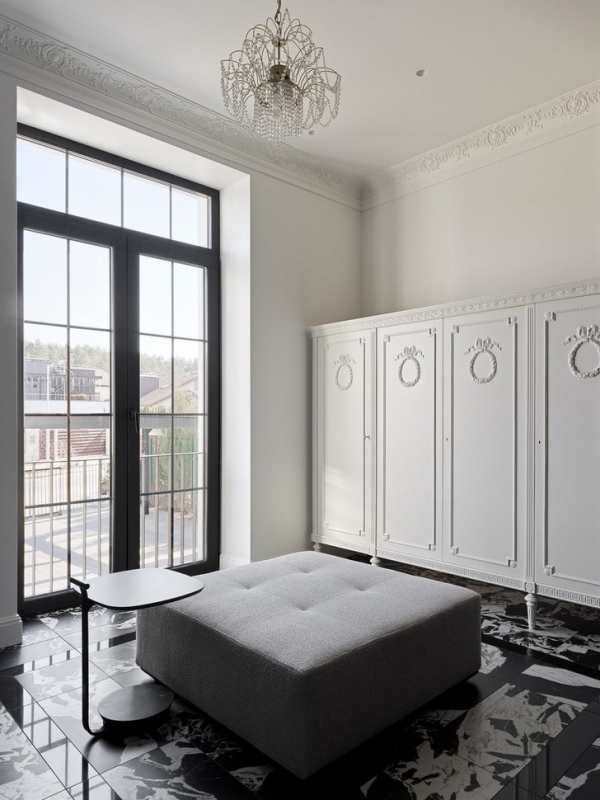 I am proud that the house has not become a completely new page of the family, torn away from the past, but turned out to be a kind of warm nest, permeated with the history of ancestors, where each object tells a piece of the life of someone from the family tree, recalls pleasant moments from childhood, continues the value of family traditions. At the same time, it keeps up with the times, since old interior items harmoniously get along with minimalistic modern ones. 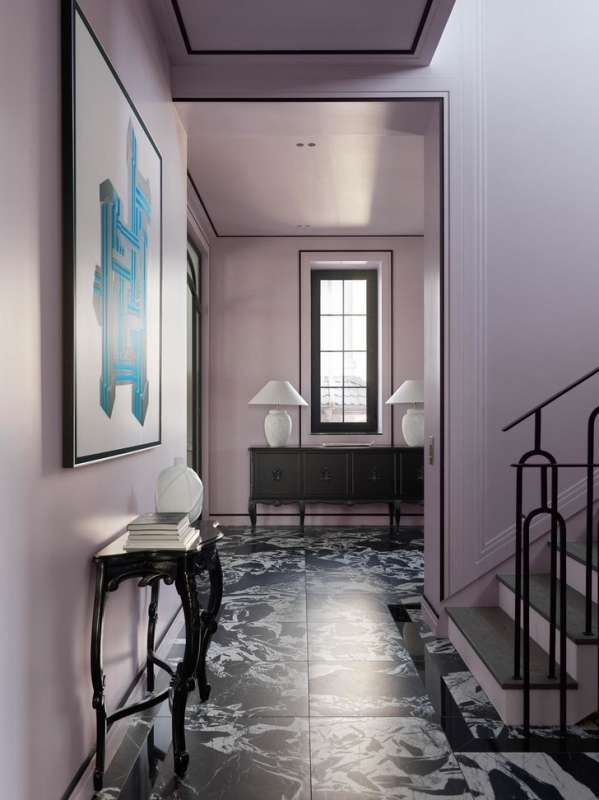 The hall of the first floor. Vase, EDG. Painting by Lilia Anifer-Ratnikova.