The creative duo of designers Joba Smits and Ninke Tinagel from the Studio Job bureau are two halves of one whole. They designed the interior of a new apartment in Amsterdam in four hands and call it their artistic manifesto. 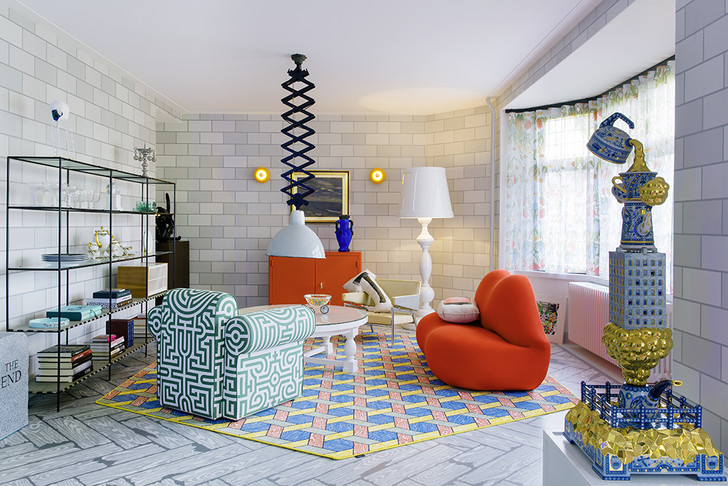 The Dutch duo Studio Job are real stars. Their ironic works are included in the expositions of forty museums around the world. The work of the bureau is connected with constant travel. Today, Yob and Ninke pose for journalists at their booth at the design exhibition in Tokyo, tomorrow — at the art fair in New York. This spring season began for the couple with the opening of a solo exhibition at the Museum of Art and Design (MAD) in the USA.

At the same time, the duo has its own “nest”, where they return again and again in between business trips. Job and Ninke designed an apartment in the center of Amsterdam, which is jokingly called “our base”. “For us, this is a place for respite and, of course, a workshop,” says Yob. The apartment is located in a 1920s high-rise building directly opposite the green zone, the Windows overlook the Vondelpark.

The interior is a bit crazy. But everyone has their own idea of a happy home. We have composed for ourselves such a fairy tale

The total area of the apartments is 150 square meters. “The apartment has classical architecture, typical for houses in this area. The previous tenants ruined everything,” says Yob, “they redid the interior several times in their own way. 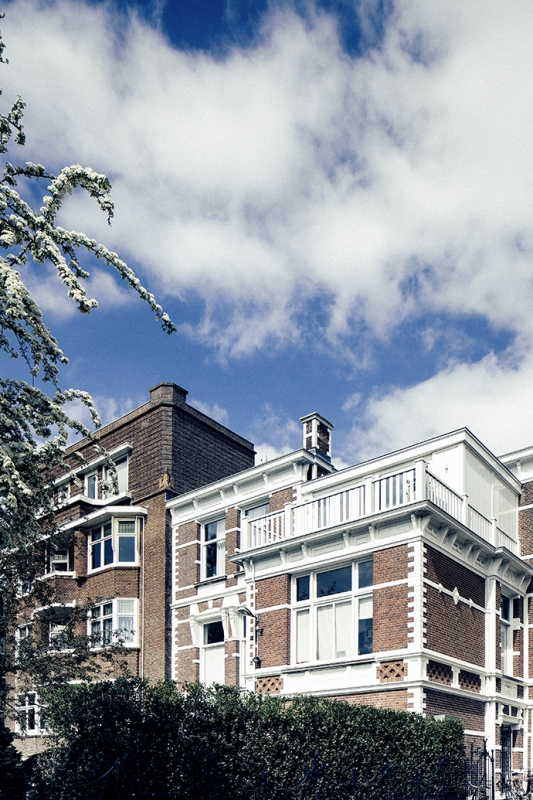 The area of the apartment is 150 sq. m. The Windows overlook the Vondelpark.

Therefore, we had to work hard to return the apartment to its former appearance. We found drawings of the building in the archives and recreated the layout according to the original project. 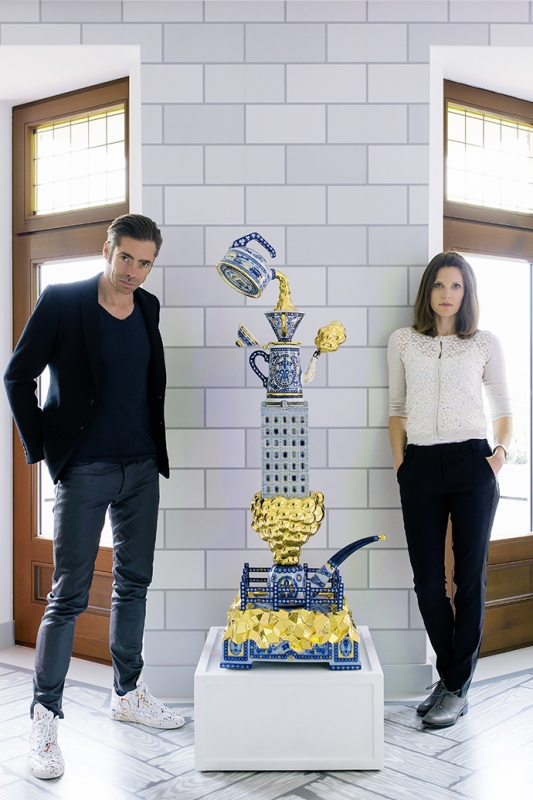 The authors of the project are Job Smits and Ninke Tinagel, Studio Job bureau.

I think it’s something like a debt that had to be paid to history. And then, furnishing the rooms, we acted more boldly, not limiting ourselves in anything.” The interior created by Yob and Ninke is colorful and imaginative. 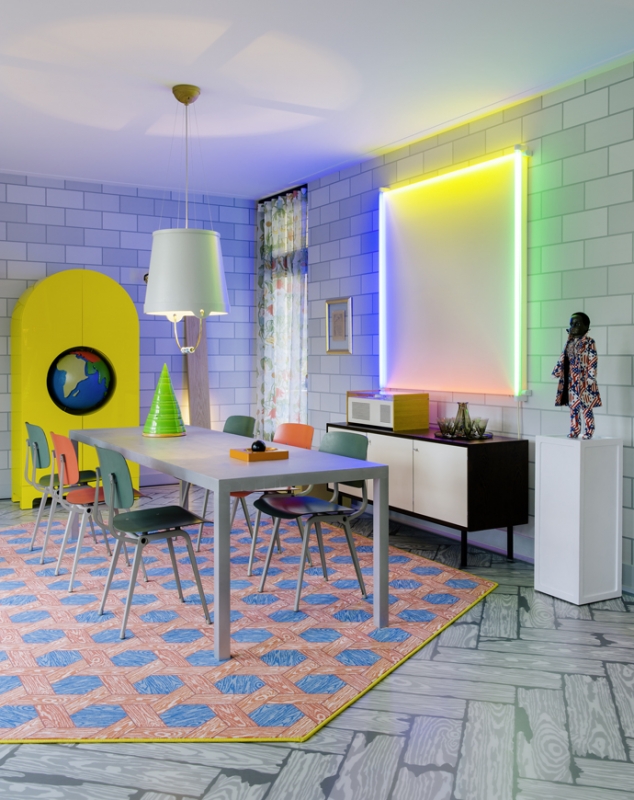 Canteen. Wallpaper, NLXL. Globe cabinet, design Studio Job for Gufram. A globe made of soft polyurethane foam is embedded in its MDF body. Bucket Lamp Ceiling lamp, Moooi. Curtains, Exposize. On the table is a set of breakfast dishes in the form of a pyramid, 1970s, designed by Pierre Cardin for Franco Pozzi.

“Many people say directly: a little crazy,” says Ninke. — You know, everyone has their own idea of a happy home. We were composing a fairy tale for ourselves.” The atmosphere is dominated by the design objects of the bureau itself.

Without a game, we can’t imagine work, design, and life in general

For example, in the center of the living room, the eye immediately rests on a giant floor sculpture made of porcelain, which the couple invented for the Dutch royal manufactory Royal Tichelaar Makkum. In the dining room, right in the center of the room, you immediately notice a bright yellow cabinet with a built-in Globe Globe of the Gufram brand — in it the owners store books, albums and pleasant trifles and souvenirs brought from travel. 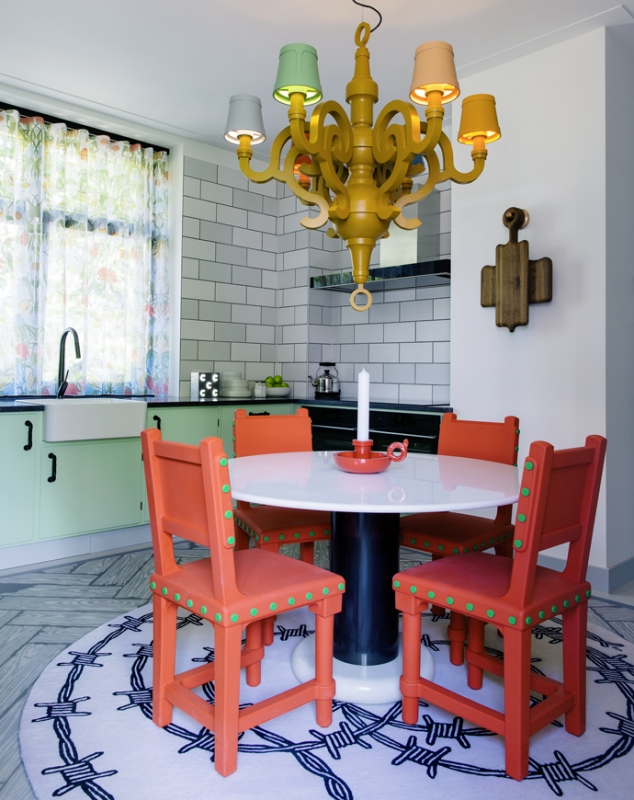 The authors of the project have maintained this somewhat surreal style in all rooms: in the bedroom you can see a floor lamp with a lampshade in the form of a yellow teapot, in the dining room — a chandelier in the form of an inverted bucket. The mood is supported by objects in the style of pop art of the 1950s and 1970s. 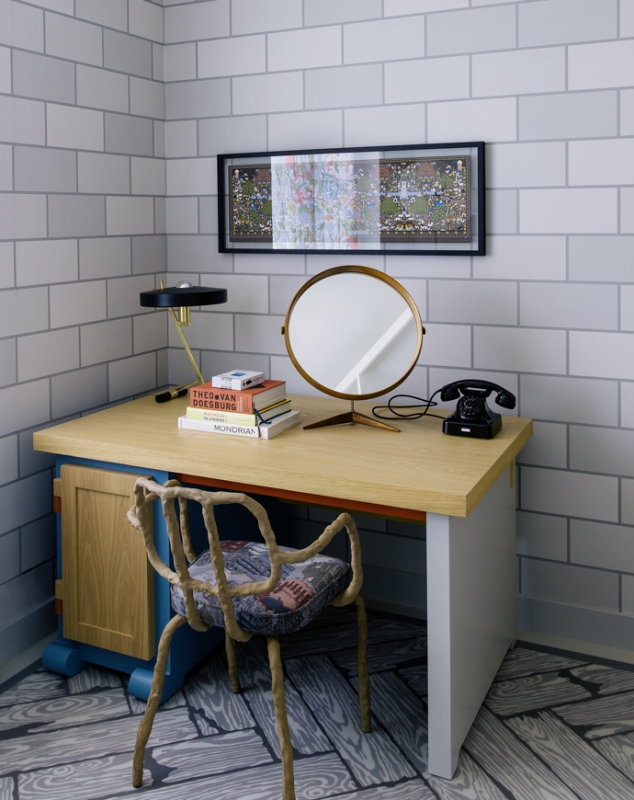 “We have put works here that we have loved and collected for a long time,— says Ninke. — For example, a sofa from Gufram in the spirit of Salvador Dali — greetings from the 1960s. 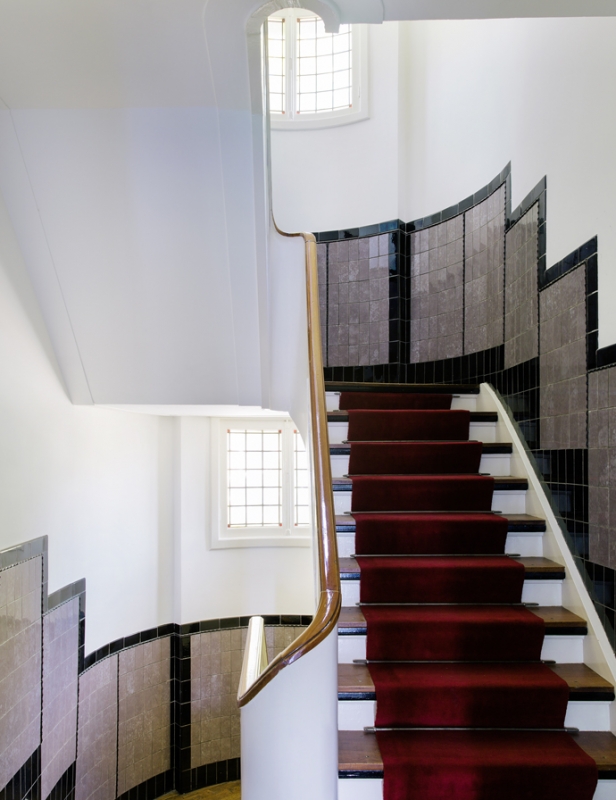 Ladder. The building was built in the 1920s.

We bought a Lotorosso Ettore Sottsass table for the kitchen, and an Aldo van den Nievelaar lamp for the bedroom.” Not without one of the favorite techniques of designers — deception. The wallpaper, which the duo designed for the Dutch company NLXL, imitates the masonry of bricks and tiles, the linoleum pattern reproduces the “herringbone” of the old worn parquet. 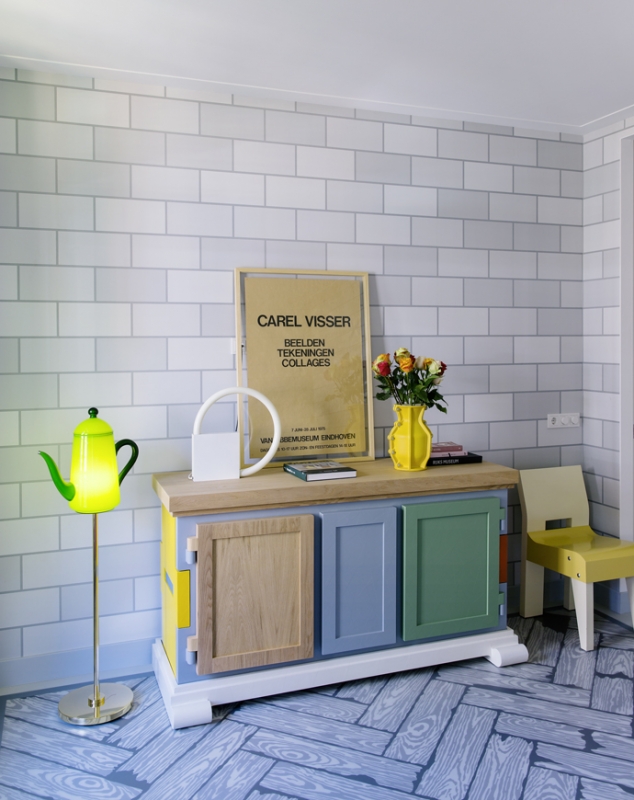 Fragments of the bedroom

The eclectic interior creates a whirlwind of emotions and ideas. What you need for a creative person 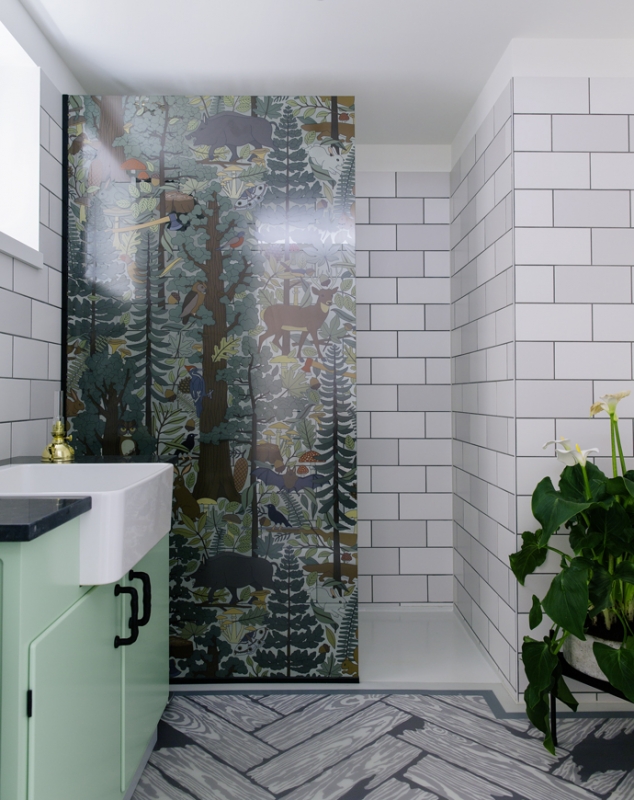 “Without the game, we can’t imagine our work and life in general. And deception is a trick, — says Yob. — In this interior we made a conscious choice in favor of eclecticism. Postmodernism, Gothic, kitsch — all elements are mixed, giving rise to a whirlwind of emotions and ideas. I think this is an ideal environment for a creative person.” www.studiojob.be 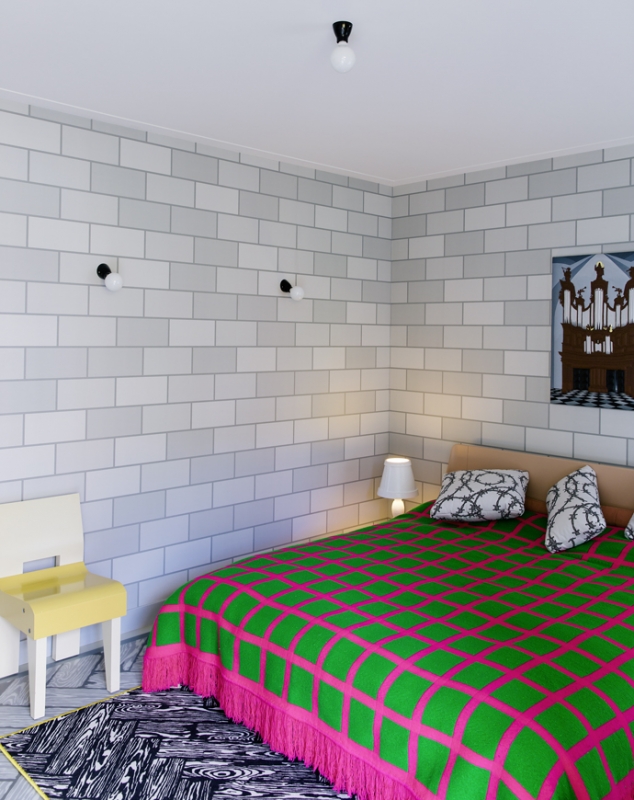