Empire estates are not uncommon in our open spaces. However, all of them, unfortunately, have long been abandoned by their inhabitants. In order to recreate the atmosphere of bygone times, the owner of this mansion took only three days 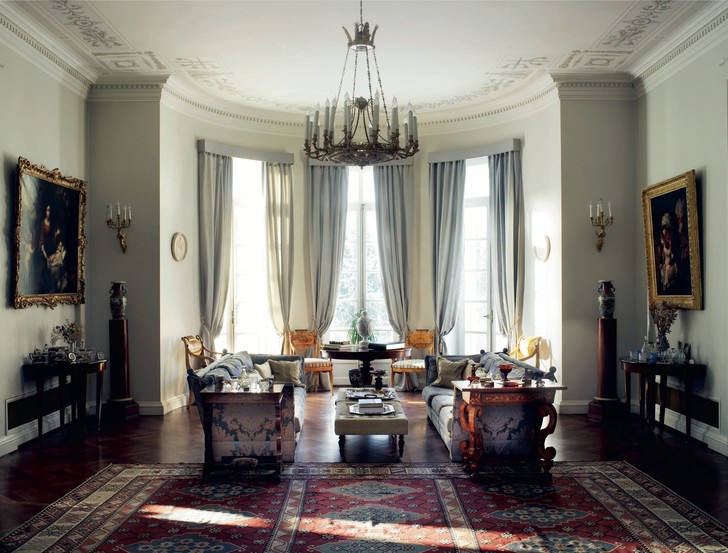 Due to the bay window, the living room is filled with light. High ceilings required painting — the grisaille Empire border is made based on the paintings of St. Petersburg palaces. Modern Schwartz paired sofas get along well with Russian furniture of the first half of the XIX century.

This story began with the construction of a modest “house of a poor landowner” for rare trips to nature. The life of the Russian estate, with rare exceptions, was modest and unassuming: low ceilings, wooden floors, painted walls, “curly” provincial furniture and white linen curtains. This is the kind of life the owner initially dreamed of. The inconvenient plot of land where the house was to be built was also not conducive to scale — the sharp slope and elongated shape dictated their own rules. But fate decided otherwise. 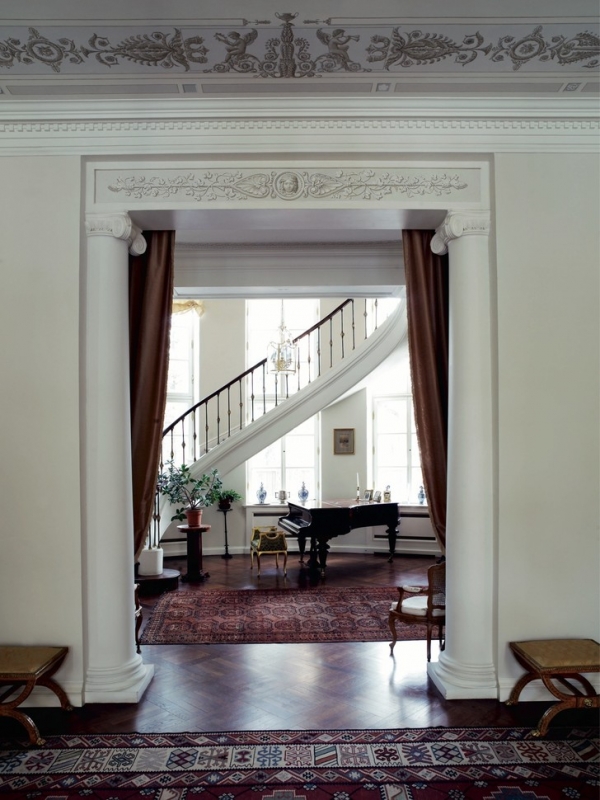 View of the staircase hall from the living room. During musical evenings, it serves as a real stage.

“Don’t call this house a museum! I prefer the period when the palaces were still inhabited by their owners” 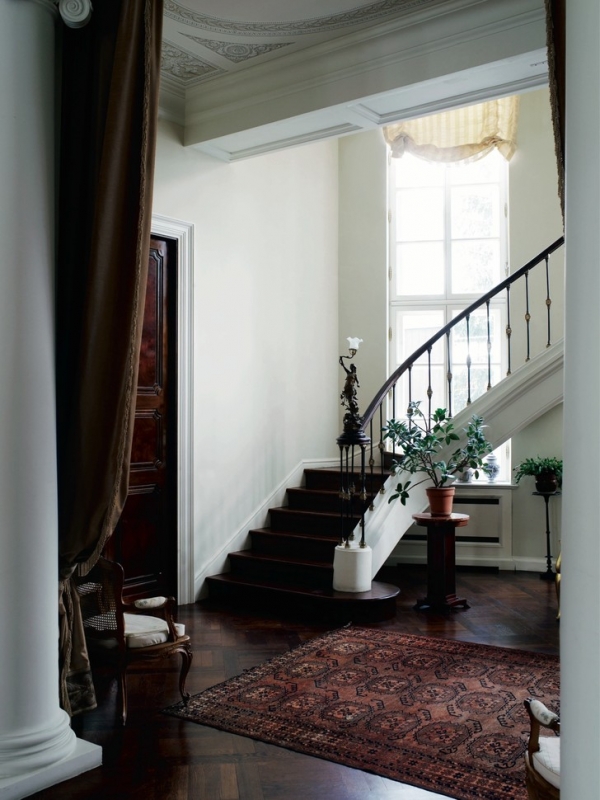 A fragment of the hall.

“As soon as construction began, I realized that the only thing that confused me about the project was the height of the ceilings,” says the owner. — Our family apartment was located in a small old mansion with cozy rooms, so outside the city we wanted to preserve not only the usual proportions of housing, but also the atmosphere of the family nest. The advantage of building “from scratch” made it possible to make a spacious suite, which I had long dreamed of. One way or another, but I decided to abandon my original plan, and the architect and I decided to increase the ceilings to a little over four meters to begin with. This, in turn, required a change in the size of the rooms — they began to look more like the halls of a small palace. In Moscow city apartments, unlike in St. Petersburg, unfortunately, you will not find this. So the construction of your own house is quite justified — an old mansion outside the city, alas, can not be found.”

Some changes led to others: in the resulting high attic floor, they decided to place living rooms, for which there was simply no place before. Despite all the alterations, the owner still modestly calls his estate a “small three-room house”. As a matter of fact, there are really three of them on the ground floor, as planned. They form a classic ceremonial suite: a living room in the center, a dining room and an office on both sides of it. The presence of the second floor required the addition of a staircase hall. And next to the dining room in a wooden annex there is a kitchen and a veranda. In general, when a good friend invited me to visit for breakfast, it seemed to me that it was served to us in at least one of the halls of the Pavlovsk Palace. “No, no, just don’t call this house a museum—” the owner waved off. — If you like the comparison with the palace, then I would prefer the period when its owners still lived in it.” 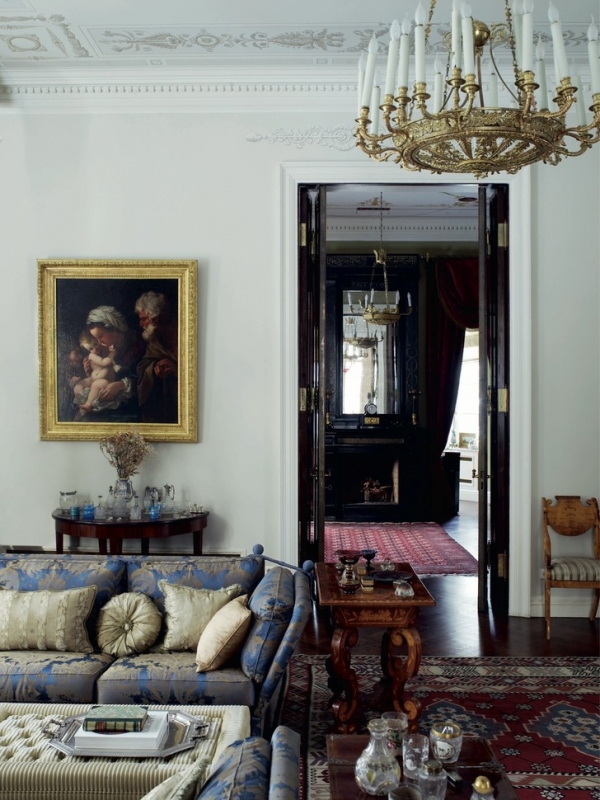 A fragment of the living room. Above the semicircular console table is a canvas sold at one of the auctions in the Winter Palace in the 1920s. On the table there are objects of Russian glass and a Sevres porcelain vase. Folding four-leaf doors lead to the study. Doors and a fireplace of the XIX century made of black marble decorated the interiors of two Moscow mansions.

Life surrounded by antique objects does not seem uncomfortable to the owners, and it is not customary to pay attention to broken porcelain 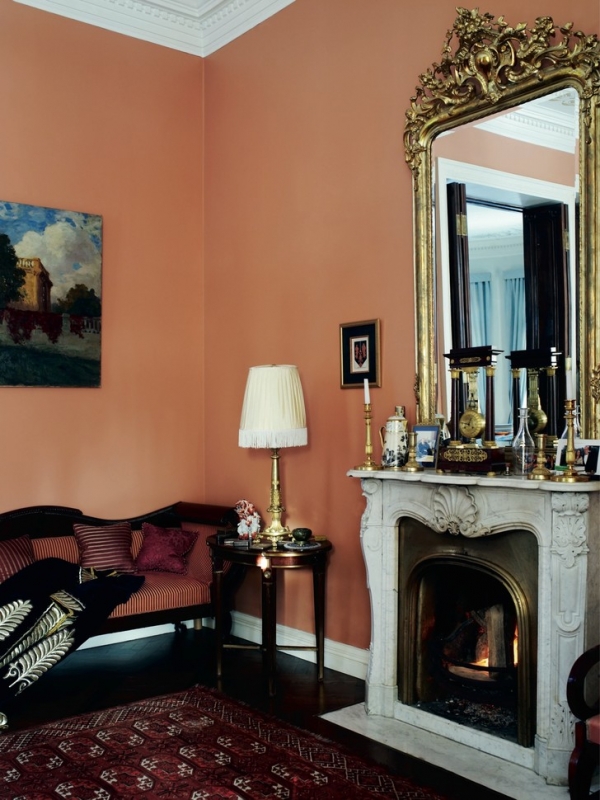 The walls of the dining room are painted with warm ochre paint according to traditional technologies. On the sofa is a Bukhara robe of gold embroidery.

The new proportions of the rooms required much more complex finishing details. We can say that the layout determines consciousness. The idea of recreating a truly palatial interior has been completed. Instead of simple tile stoves, two fireplaces were installed, and antique fittings were installed on the windows. All carpentry work was carried out according to the samples of the XIX century. 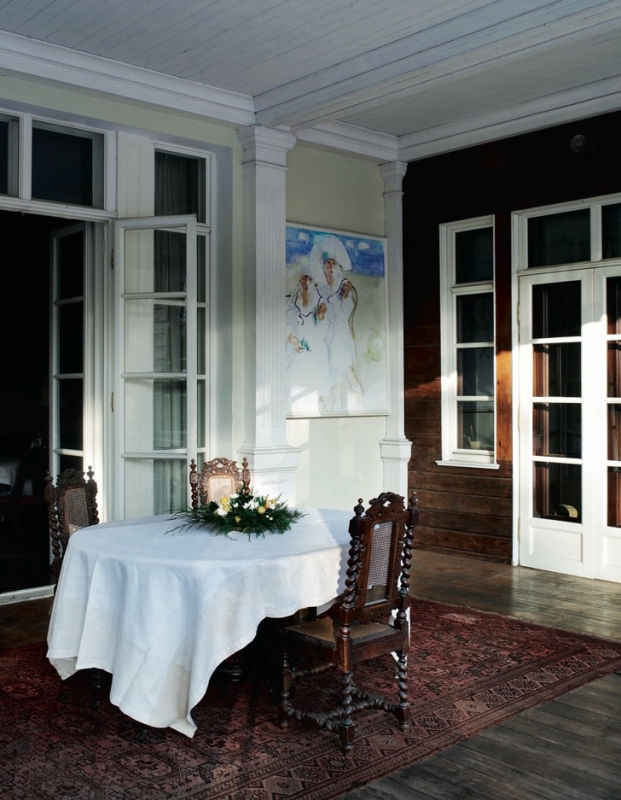 The outdoor terrace is a continuation of the dining room. According to the owner, this is one of the main places in a country house. Rustam Khamdamov’s canvases leave the walls only in late autumn. On the right are the doors to the wooden kitchen.

The classic manor solution of the living room with three white doors has been replaced with a more spectacular one: a portal leads from the staircase hall to the living room, and high paired folding doors, once located in the Moscow mansion of the merchants Ovchinnikovs, lead to the study and dining room adjacent to it. It is not surprising that, after the house was built, the owners decided to use it as a permanent residence: furniture, chandeliers, library, paintings were transported from Moscow. The creation of the interior itself took only three days — everything was simply put in its place: good architecture does not require additional decorations. 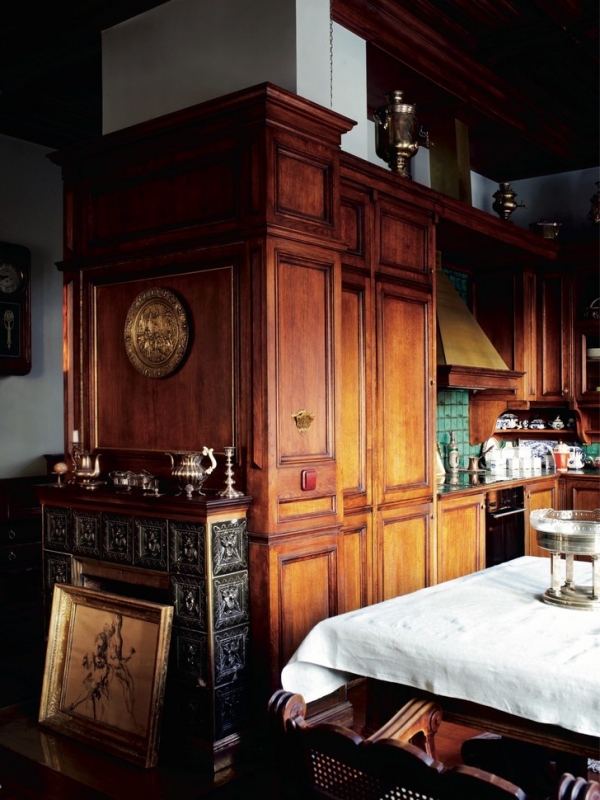 The kitchen is decorated in the best traditions of the early XX century: the walls are covered with oak panels, the fireplace is majolica tiles of the Kuznetsov factory. 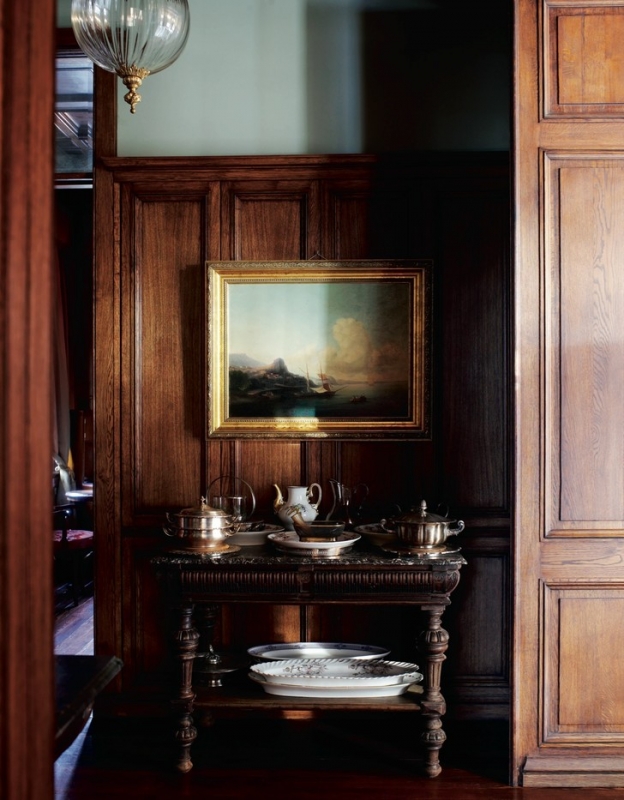 The pantry connects the dining room and the kitchen. On an oak counter with a marble countertop there are items necessary for daily table setting.

Life surrounded by antiques does not seem uncomfortable to the owners, as is commonly believed. On the contrary, their ergonomics, in modern terms, often differs from their modern counterparts for the better. Well, if in the course of life the back of the sofa cracked or an old saucer broke — it is not customary to pay attention to this. There is always something to replace it. It seems the only new furniture here is two Schwartz sofas in the living room. They were chosen for their convenience and impeccable style — no wonder they are called furniture Rolls-Royce.

View from the living room to the dining room and terrace. Chandelier with ruby glass — the end of the XVIII century.

The owner is generally not inclined to compromise. He still regrets the only concession to the architect, who insisted on a bay window in the living room to better illuminate this large space. “Now it seems that this facade is the main one,” the owner complains. — And I wanted the house to look like an outbuilding left over from a large estate.” 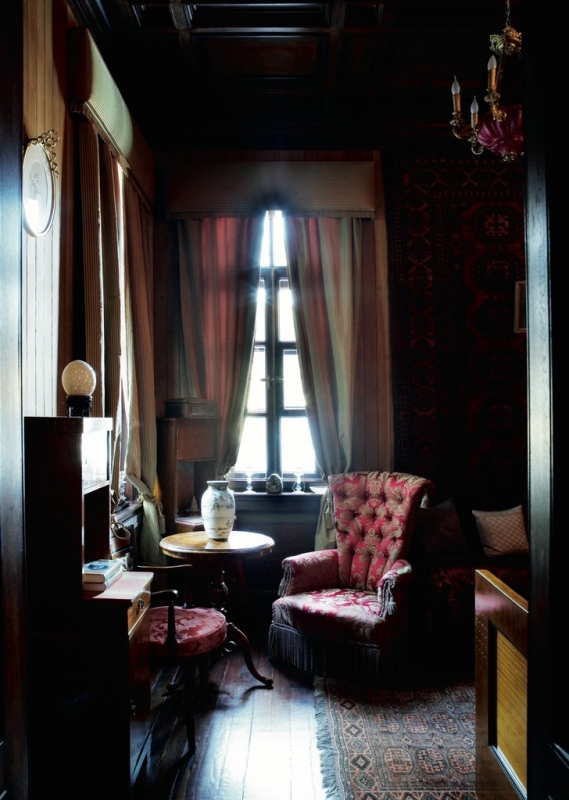 The only bedroom on the first floor is located in a wooden annex. 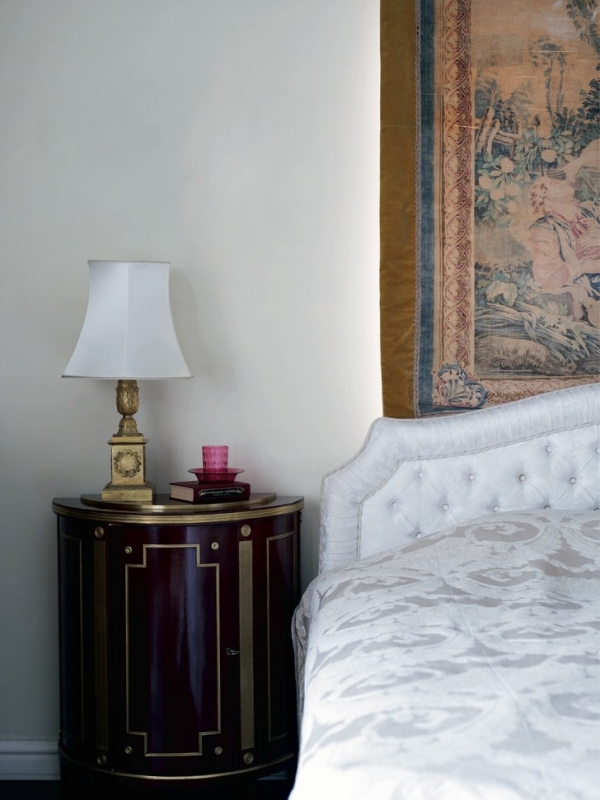 One of the bedrooms on the second floor.

However, numerous guests are still trying to find ancient ruins on the neighbor’s plots. So the illusion is perfected. Even the disadvantages of the relief have turned into undeniable advantages: from the windows, a panoramic view of the neighboring forest beyond the river opens theatrically. However, a good neighborhood among landowners has always been highly valued. 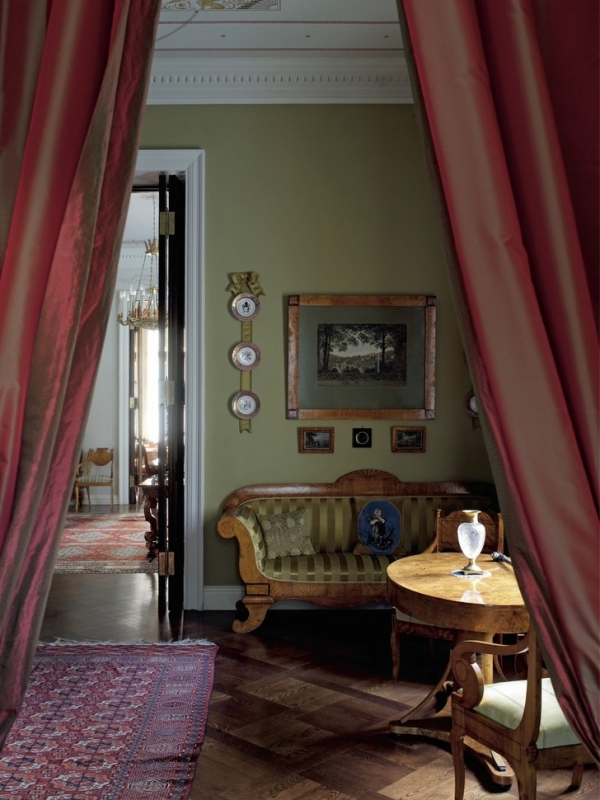 The color of the walls of the office was selected for a set of furniture made of poplar, Karelian and wavy birch. 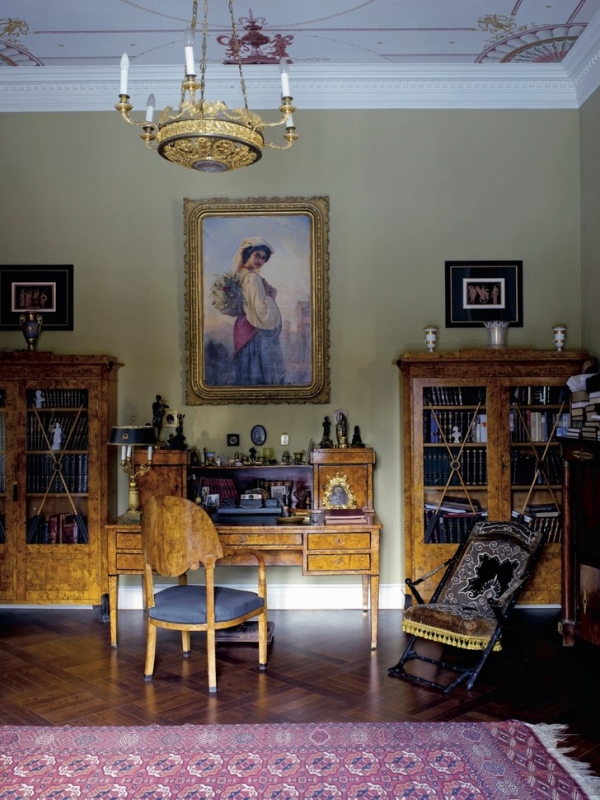 Office. Above the “Pavlovsky” table-bureau made of poplar is a painting “Chichara” by Julia Wilhelmina Hagen-Schwartz, a student of Karl Bryullov. Furniture, Russia, the beginning of the XIX century. Bronze chandelier of the same time. The chaise lounge chair comes from Anichkov Palace. 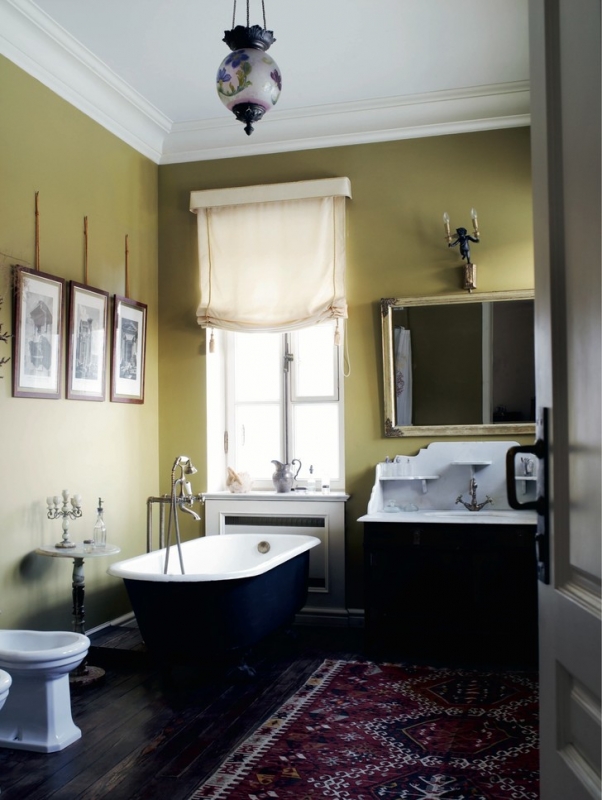 The master bathroom is located on the second floor. Bath and washbasin, the beginning of the XX century.

The authors of the project: architect Fedor Arzamanov, bureau “Akant — architectural workshop on Yauza”, www.akant-yauza.ru . The interior design was handled by the owner of the house