A technical attic with low ceilings and a dark narrow corridor was turned by designer Timofey Veresnovsky into aesthetic apartments in the spirit of New York high-rises. It turned out to be a bright project that was included in the “Golden Collection” of ELLE DECORATION (first printed in September 2019) 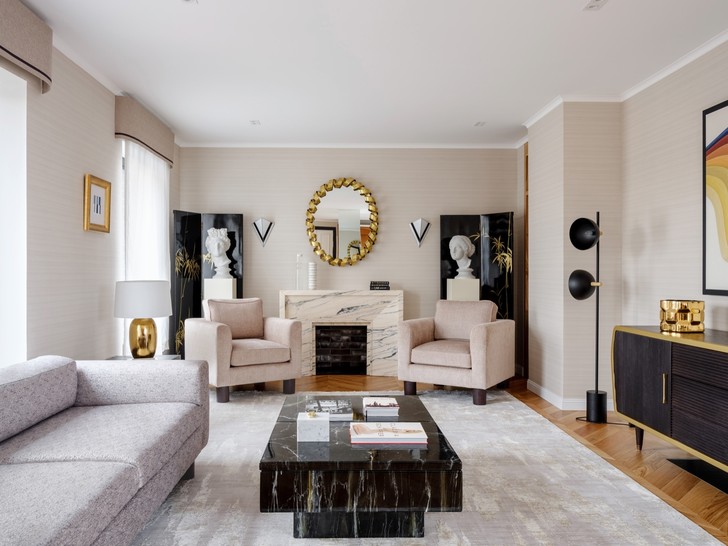 The living room is decorated in light beige tones with wooden accents. Italian marble for the fireplace lining had to wait several months, but it was worth it! The sofa and upholstered chairs from Casamance are made to order. Bra, Germany, 1930s, and Chinoiserie screen, 1960s, Belgium, all – Correct Form Gallery. Carpet, the company “Star carpets”. Table, vintage.

The history of this apartment began in 2004, when the customer Yuri, the owner of a large development company, during the construction of a house in the center of St. Petersburg, left for himself the last, technical floor with a huge terrace. Later it was converted into an apartment — with a long dark corridor, small rooms with plastic windows — and was no longer touched. 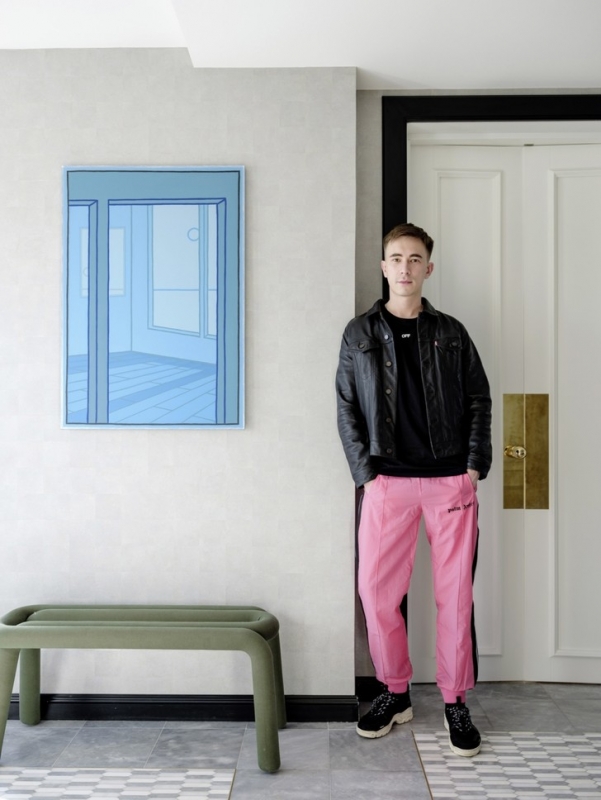 Designer Timofey Veresnovsky. On the wall is a copy of the work of Hans Schuran Heath West. 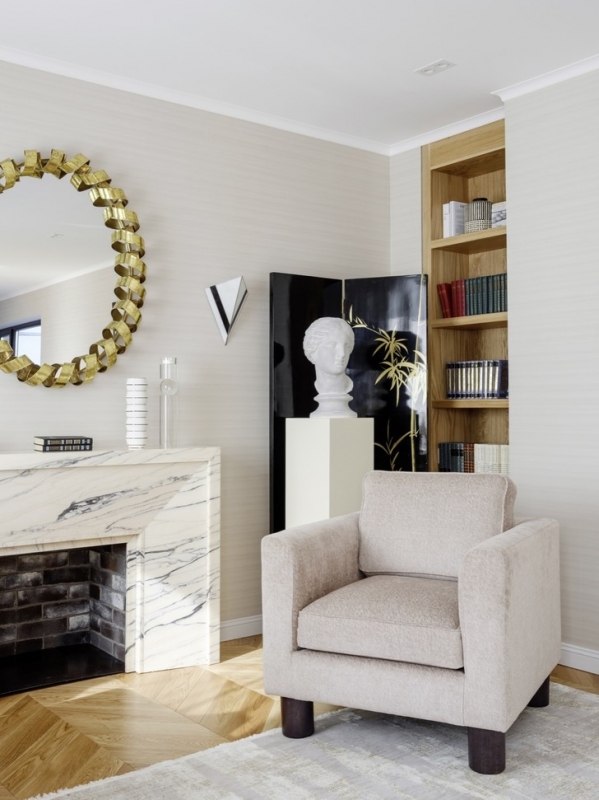 “Yuri and Maria are my old friends,” says designer Timofey Veresnovsky. — Every time I visited them, they talked about the need for change, but it didn’t go beyond talking. I frankly did not believe in this apartment, and it was hard for customers to decide on a global restructuring. They hoped to make do with spot changes and cosmetic repairs, but I was of the opinion that everything needs to be changed from and to.” 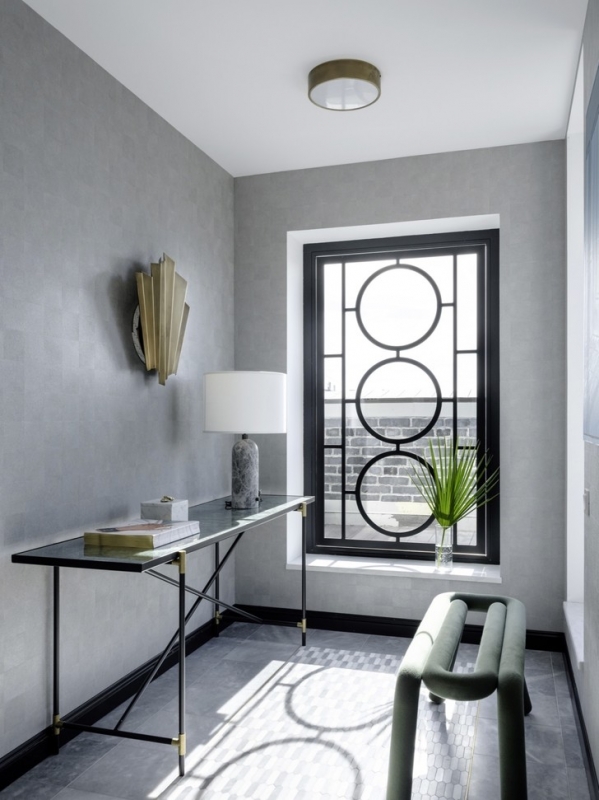 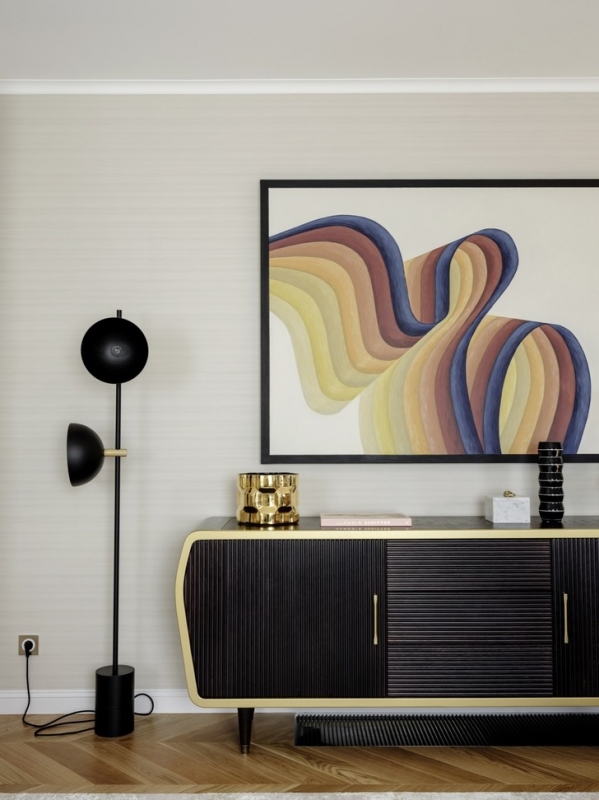 For a long time the apartment remained preserved in the best traditions of the “renovation” of the noughties: beige plaster on the walls, sand tiles on the floor, bulky furniture of dark red shades. Until the owners faced the question of replacing the window in the hall, and they asked Timofey to help.

“I widened the opening and ordered a window in a black wooden frame,” the designer recalls. — As soon as I installed it, there was a click in my head. I saw an apartment from a New York skyscraper: low ceilings, black frames and a huge terrace! The picture was completely formed, but there was no time for the project — the customers left for Italy in two days. Raising a glass of sparkling wine with a wish for a good trip, I incidentally shared my ideas… And the very next day the dismantling began!” 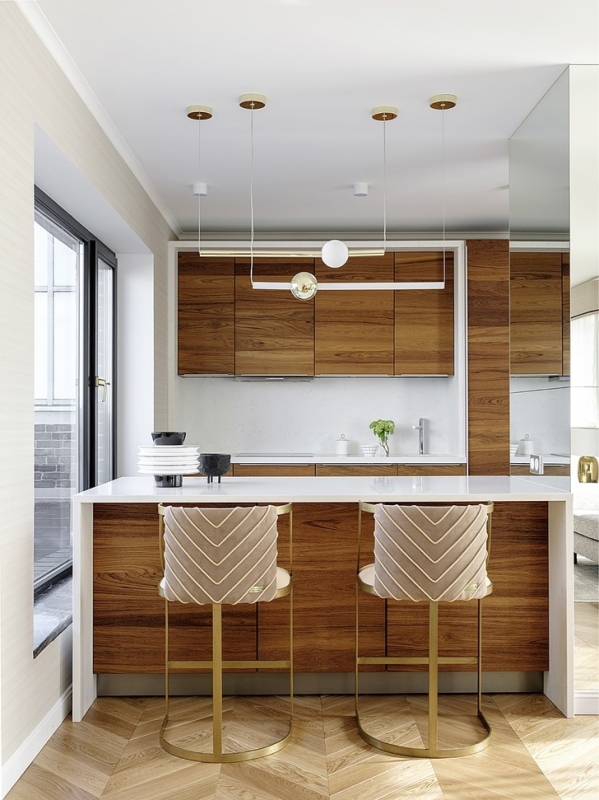 “Now we drink sparkling wine in the new kitchen and no longer argue about repairs!” 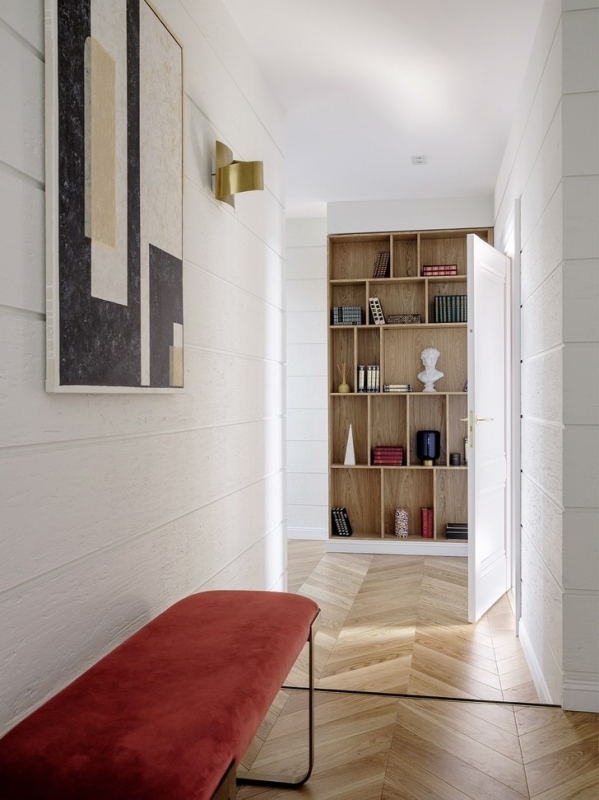 The walls of the corridor are decorated with rust, traditionally used on the facades of St. Petersburg houses. Banquette, Rooma Design & Furniture. Sconce, designed by Peter Celsing, 1960-e, Denmark.

The designer expanded all the existing window openings and added seven new ones, thanks to the terrace it was not difficult. Some turned out from floor to ceiling, and finally there was light and air in the apartment. In addition to the cardinal redevelopment, electrics and communications were replaced.

“Usually customers have a hard time parting with items from the past interior, but, fortunately, not this time,” says Timofey. — I replaced absolutely everything, from the walls to the cutlery.” Yuri and Maria, not presenting the big picture, fully trusted the designer, only periodically coordinating individual details, such as sofa upholstery, and did not hurry with the completion of construction. For example, the Italian marble for the fireplace in the living room had to wait several months, but it was worth it. 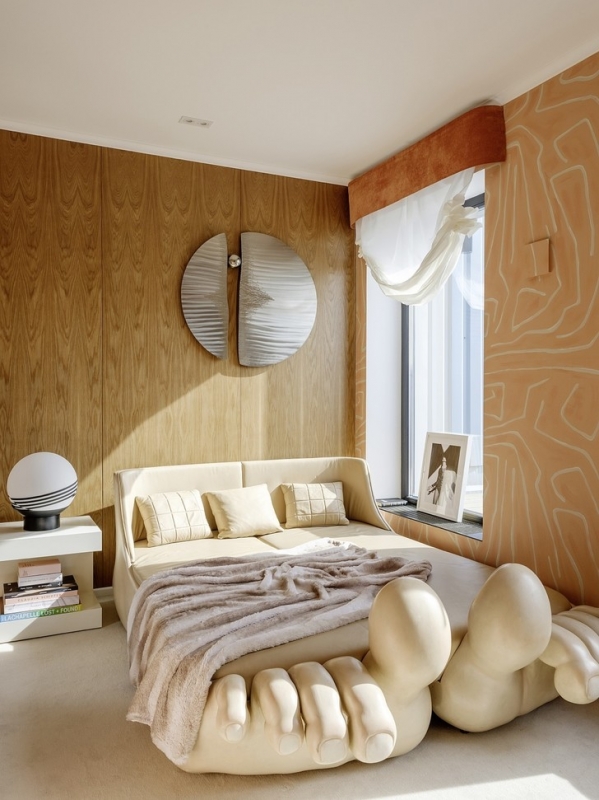 In the room of the eldest daughter, the main focus, of course, is the Pedus bed in the style of pop design from the provocative German designer Frank Oelke, Chairmuseum gallery. This is a limited collection, a total of fourteen pieces were released. On the wall is a metal panel from Sterling Journeys. Table lamp, Lee Broom. 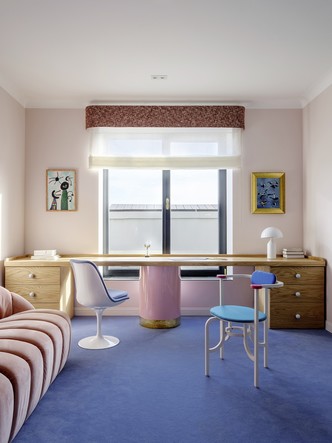 Childish. The desk is made to order. Multicolored chair, Alexander Kanygin. 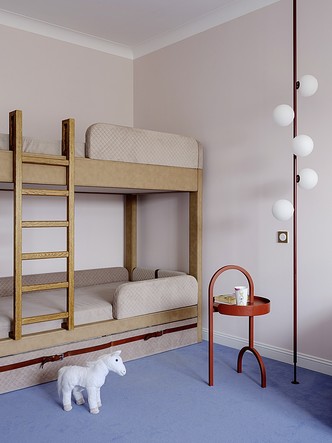 The baby bed and floor lamp are made to order. Coffee table, Alexander Kanygin.

“Lilac tiles, the result of numerous experiments, fell in love with the girls at first sight” 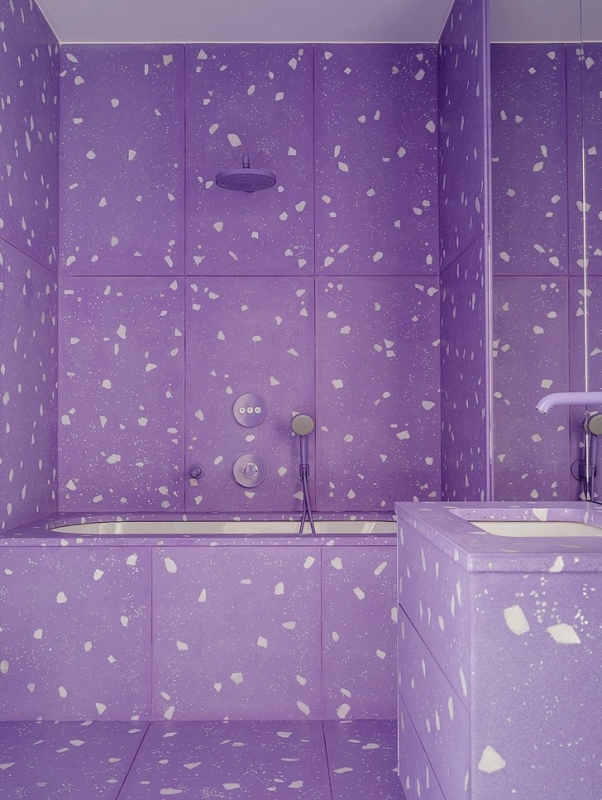 Lilac tiles in the children’s bathroom, the result of numerous experiments with stone and coating techniques, fell in love with the girls at first sight. Tile, Lick my brick workshop. Mixers, Hansgrohe.

In just four months, an uncomfortable dark apartment turned into a comfortable apartment with a spacious living room, a nursery, a room for a teenager, a master bedroom and three bathrooms. “Of course, it was risky,” admits Timofey Veresnovsky. — Having received an absolute credit of trust, I was happy and excited at the same time. The customers appeared at the construction site only a few times, but being good friends, we apparently caught the same drive, which we literally feel in the resulting interior – sedate, but without too much officiousness, charismatic and modern. Having entered here for the first time after the renovation and having seen everything that I had previously explained in words, the customers were completely delighted. It was an incredible feeling! Now we drink sparkling wine in the new kitchen and no longer argue about repairs.” 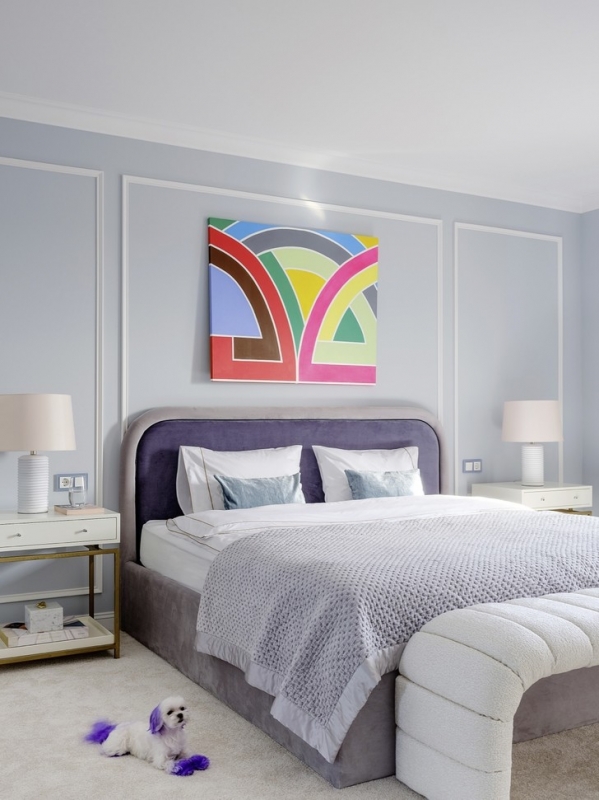 The master bedroom. The bed is made to order. Bedside tables, Rooma Design & Furniture. The painting is a copy of the work of American artist Frank Stella.

“I created an interior for a modern family, aesthetic and noble, but at the same time lively and entertaining” 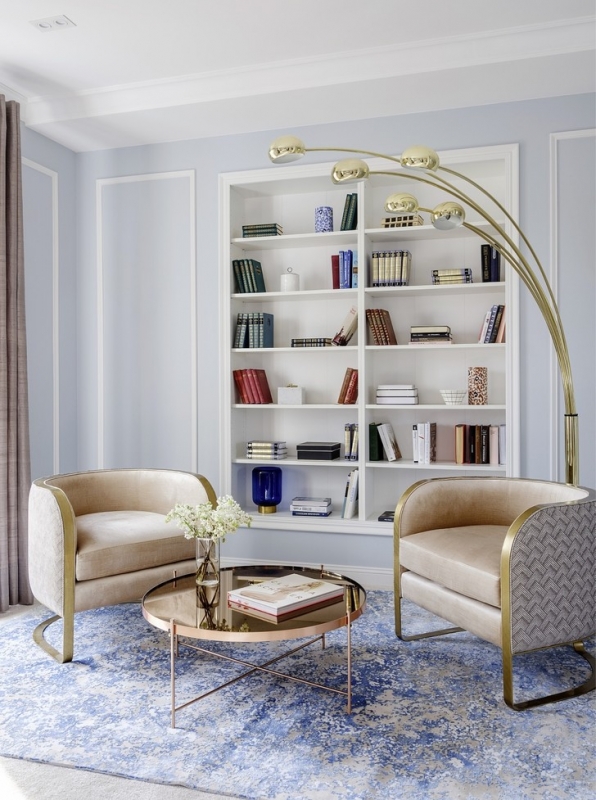 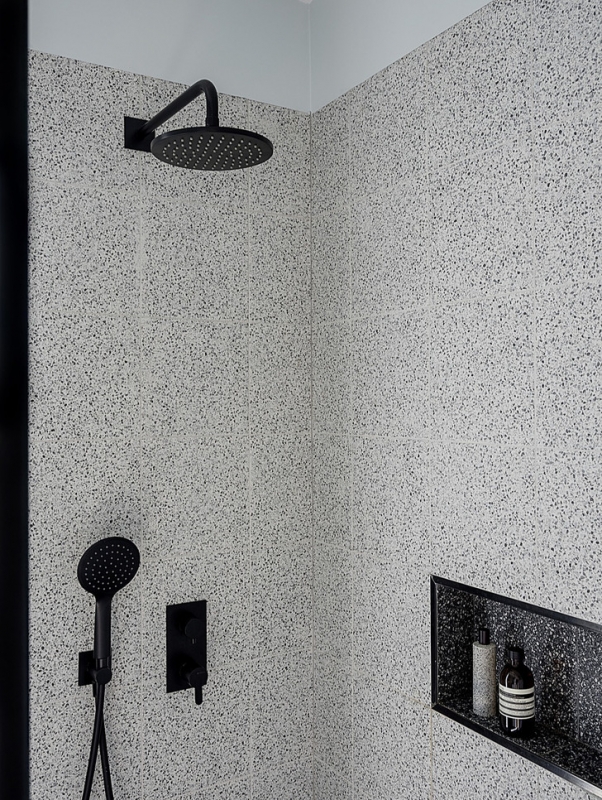