Tasmore House burned to the ground and was rebuilt, but it seems as if its interior took centuries to develop. The illusion created by Alberto Pinto is so attractive that it is easy to believe in it! This project was first printed in November 2010, two years before the death of the decorator. We recall this work of the great master 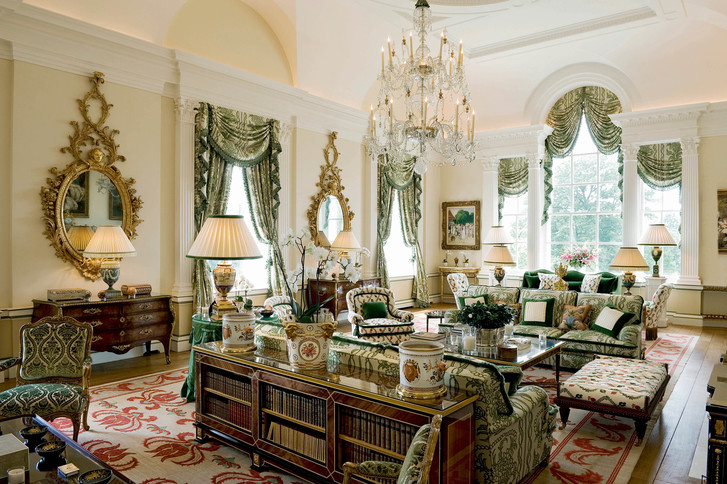 The living room is stylized as the interiors of the famous English architect of the XVIII century Robert Adam. All the items were bought at auctions and antique sales, with the exception of table lamps — they were made in the studio of Alberto Pinto, and antique vases were used as legs.

The French decorator Alberto Pinto has two categories of customers — millionaires and billionaires. He designs private planes and multi-meter yachts almost more often than houses, apartments and, frankly, palaces. Of course, not alone — 60 people work under him. 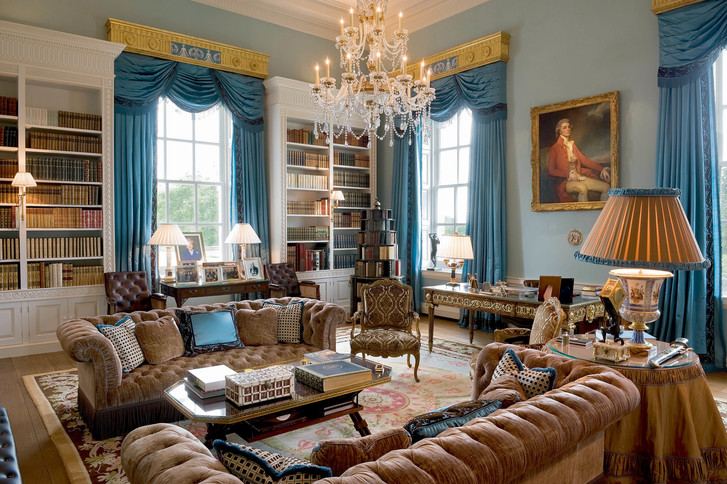 When designing the library, Alberto Pinto followed the eclectic taste of the aristocrats of the XVIII century, who often furnished their mansions with things brought from a traditional grand tour of Europe. The most valuable items in the room are a male portrait by an unknown artist and a desk (presumably the work of the famous furniture maker Joseph).

The creative path of the “court” decorator of the rich and famous was long and tortuous. After graduating from the prestigious Louvre School in Paris (École du Louvre), Pinto moved to America and founded an interior photography agency there. (It is through the efforts of such companies that houses and apartments from all over the world come to our pages.) Cruising around the world in search of objects for shooting, he plunged so deeply into the topic that he decided to master the craft of a decorator himself. 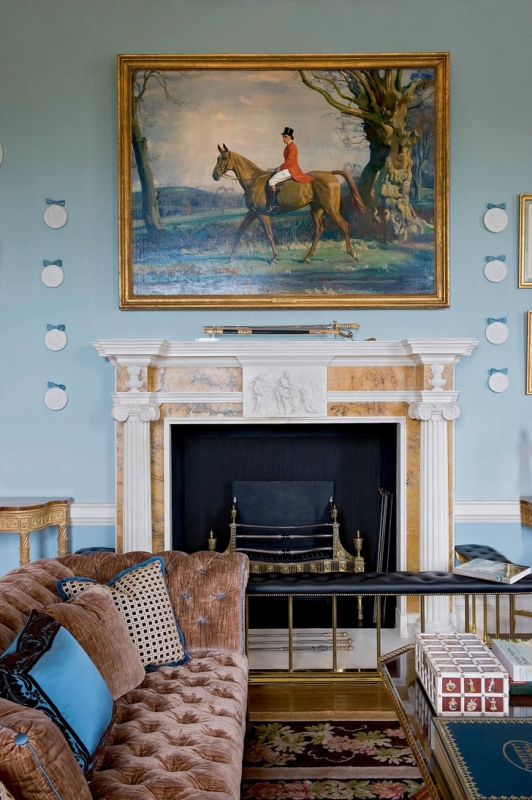 In terms of the mansion is a square, which is inscribed perfectly round atrium 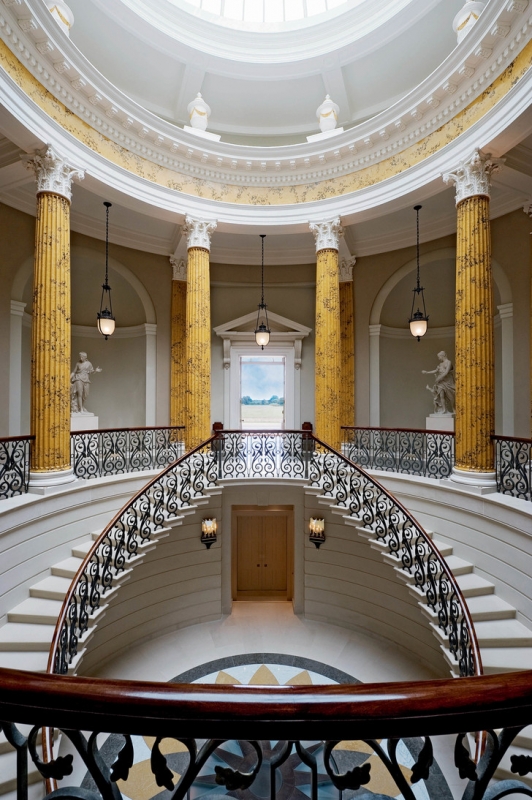 The spectacular atrium with a height of three floors is the work of the architectural firm Whithfield Partners. Streams of light flood the room through the glazed dome.

Pinto’s career immediately went uphill: customers appreciated his ability to create “expensive” interiors without crossing the fine line between luxury and kitsch. For thirty years of his career, he happened to design both Moroccan riads and Parisian apartments. But the task that the decorator faced when finishing the English mansion Tasmore House was not quite ordinary. A magnificent building with classical porticos and a dome reminiscent of Andrea Palladio’s masterpiece — the famous Villa Rotonda — was built on the site of an 18th-century mansion that burned to the ground. 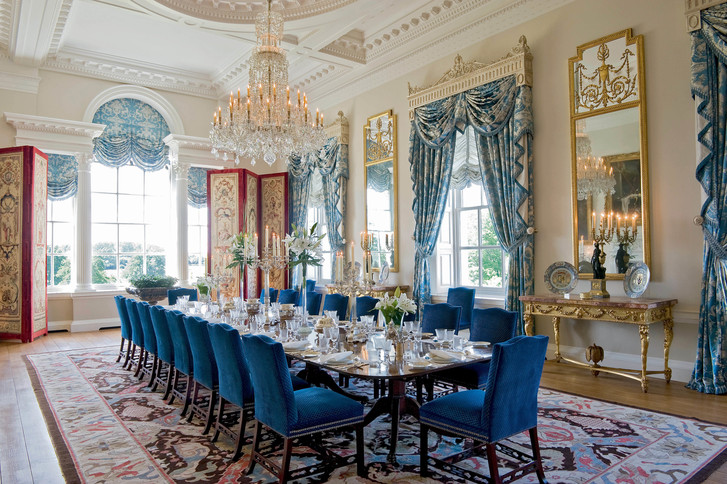 The table in the front dining room is designed for 18 people. The chairs, upholstered in blue velvet, are made to order. The room is decorated with portraits and still lifes of old masters. Antique tapestries with allegories have been stretched on specially made screens for 12 months.

The Tasmore House that had risen from the ashes should have been decorated as if there had been no fire, and the interior was formed by itself – year after year, decade after decade. Pinto coped with the task brilliantly. The era of the English Enlightenment adjoins here with the Victorian era — the time of wealthy aristocratic collectors who owned industrial and agricultural empires. 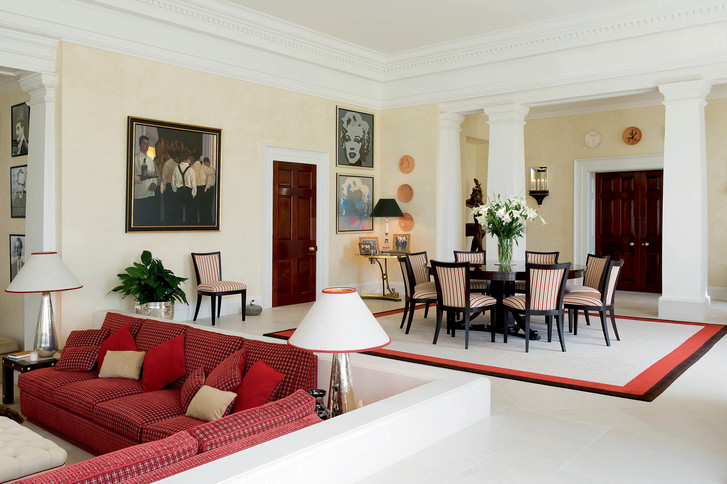 A large “family” living room (it is distinguished from the front by the presence of a TV) is decorated in a more modern style than rooms designed to receive guests. Against the background of light yellow walls, plates from Jean Cocteau and photographs of movie stars of the golden age of Hollywood look especially impressive.

Even officials from the Bureau for the Protection of Monuments, who forgave him historical inaccuracies, could not resist the charm of Pinto’s style 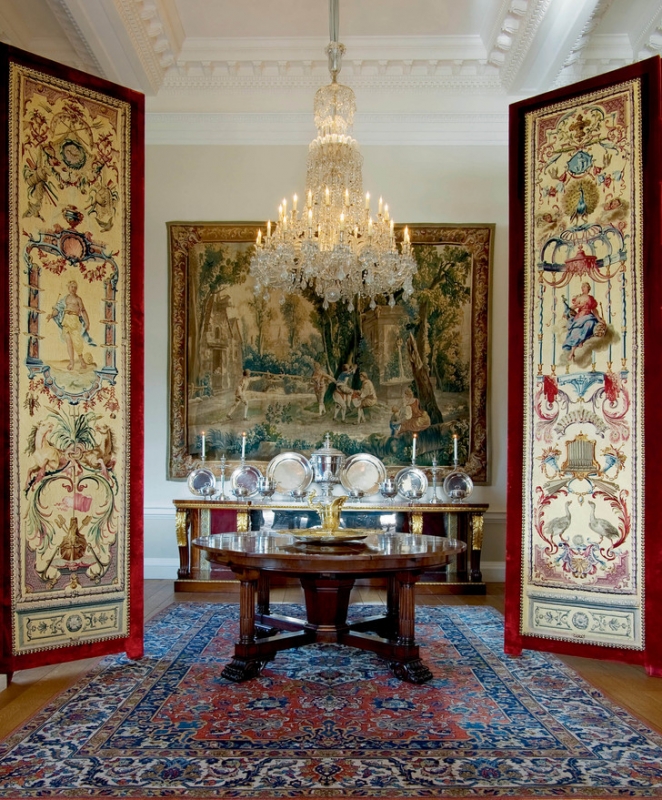 On the console table in the dining room there is a collection of “family” silver, bought at auctions. On the right and left, fragments of screens are visible, on which tapestries with allegories of 12 months are stretched.

The prim “century of Victoria”, in turn, smoothly flows into the XX century with its insatiable passion for Hollywood glamour. Each room has its own color and mood: from soft blue tones of Wedgwood porcelain to sunny shades of yellow. All of them are revealed in a new way depending on the time of day. 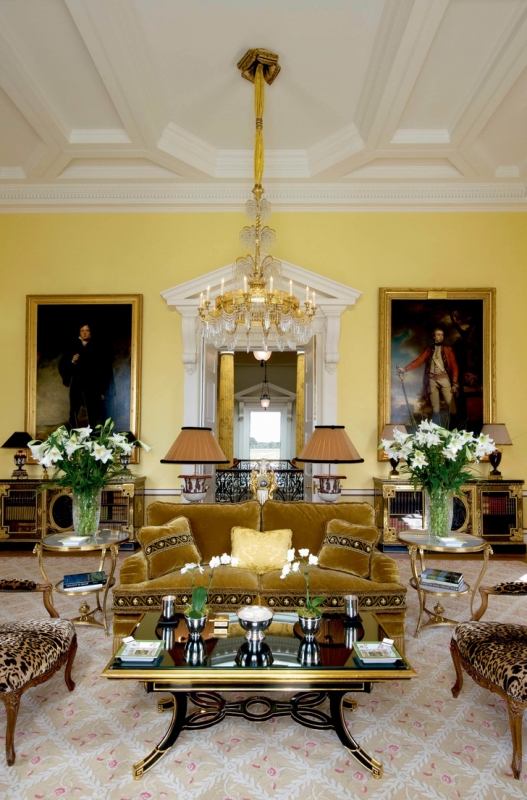 The “heart” of the small living room with a coffered ceiling is a modern glass table, which is served every day for a traditional English fife—o-clock – five o’clock tea.

The decoration of the reception halls on the ground floor is not a literal reconstruction of the original interior, but all the “liberties” were approved by the strict British Bureau for the Protection of Cultural Heritage. The decorator managed to recreate the spirit of the XVIII century, decorating the rooms with works of geniuses of that era — Chippendale furniture, paintings by Turner and Gainsborough. At the same time, the living room with a TV and portraits of movie stars on the walls reminds us that time did not stop in the era of Gainsborough and Chippendale. Life goes on! 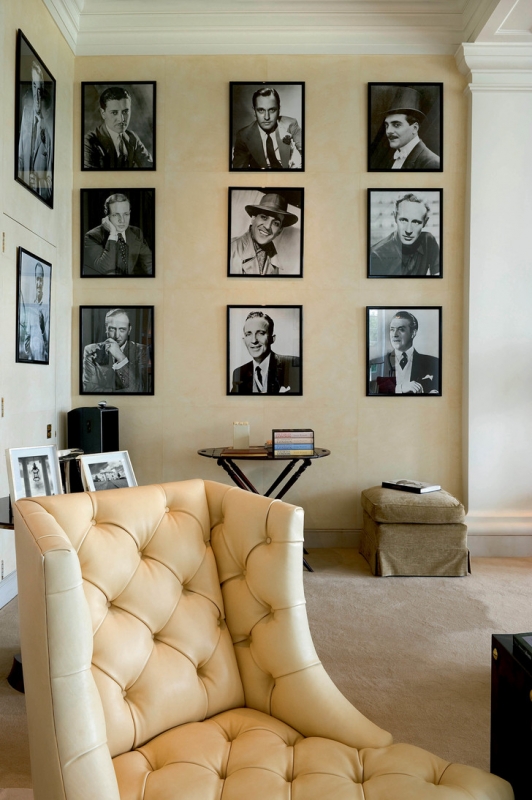 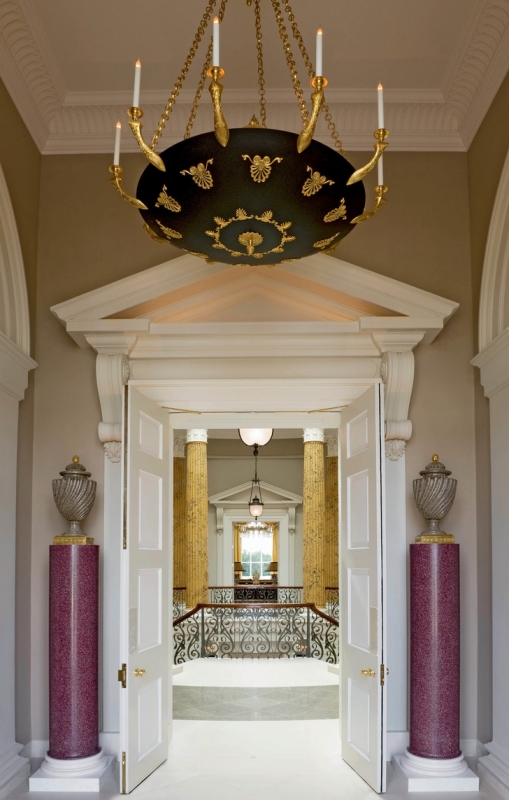 In the lobby, a luxurious Empire-style chandelier illuminates columns of red porphyry, on which granite urns are installed.